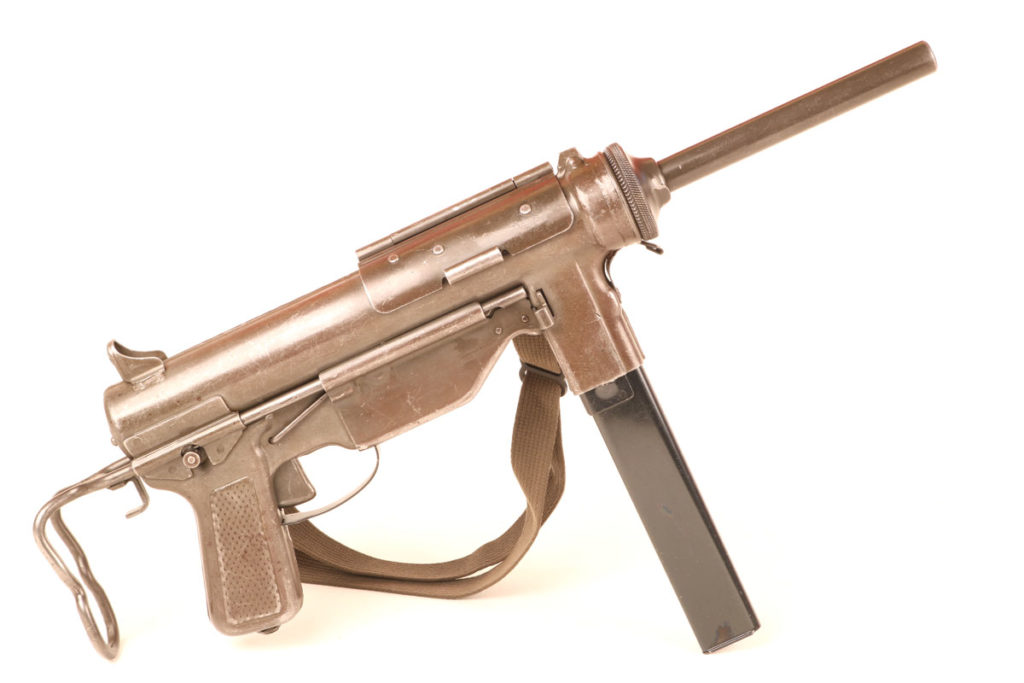 The M3A1 Grease Gun saw service at the very end of the Second World War. The earlier M3 entered combat in Europe on D-Day.

On a cold day in January of 1945, an American Infantry Private named Bob Shine was ordered to assault uphill to seize a fighting position occupied by three young German Volkssturm troopers near Salmchateau, Belgium. Shine and two comrades quickly prepared for the mission. These three troopers typically carried .30-06 M1 rifles but appreciated that these long heavy weapons would be less than ideal tools for a chaotic close-range assault. Trading among other members of their unit all three took up M3 Grease Guns. The greasers were relatively new and ugly as sin, but they could be relied upon to provide a proper volume of heavy automatic fire. 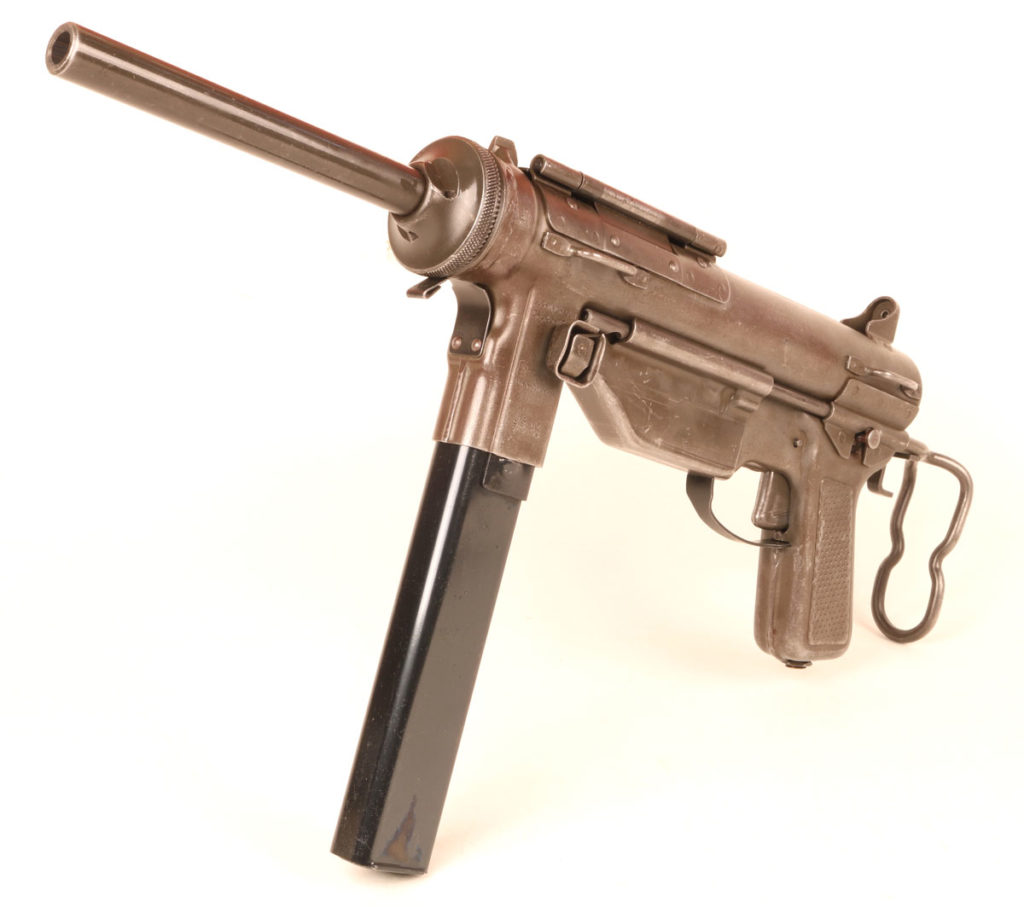 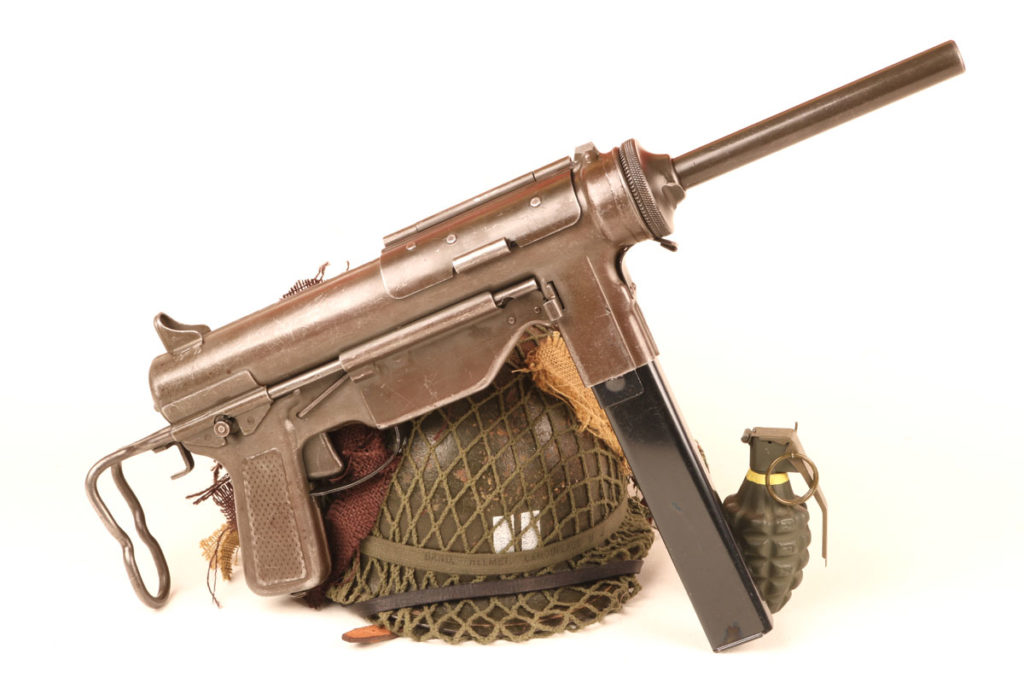 Advancing against blistering fire from German automatic weapons, Private Shine and his two buddies fired their Grease Guns in short bursts on the run, swapping magazines as they moved. In their frenzied rush up the hill Shine and his mates severely wounded all three German defenders. Once astride the position the three Americans finished them off with bursts from their Grease Guns before the rest of their unit caught up.

These new American submachine guns had been devastatingly effective at close range, but Shine and his buddies had also been very fortunate. The three young German soldiers bled out and died for a doomed and blighted cause on this forgotten Belgian hillside. In their own way, the dark events that surrounded these six young men on that one bleak day encapsulate the pathos and horror that characterized the Second World War.

The Thompson submachine gun was the impetus behind the development of the Grease Gun. Crazy heavy and shockingly expensive, the Thompson was actually obsolete before the war began.

The Thompson submachine gun was obsolete by the outbreak of World War II, but it was the only tool at hand. Sinfully heavy and just stupidly expensive, we still produced 1.5 million copies by the time production ceased. A Tommy gun cost the government about $225 at the beginning of the war. That equates out to about $3,700 today. Compare that to $85 for an M1 Garand, and $45 for a carbine. We simply had to do better.

George Hyde of General Motors’ Inland Division began work on the M3 submachine gun in October of 1942 as a replacement for the Thompson. The stamped steel gun he developed was universally referred to as the Grease Gun based on its esoteric similarity to this common mechanic’s tool. By the time production really got rolling these utilitarian weapons cost Uncle Sam about $18 apiece.

The M3 was optimized for mass production. The receivers were constructed of two pressed steel clamshells welded together. This component did little more than enclose the action and yielded a gun that was remarkably forgiving of battlefield grime. The bolt rode on a pair of guide rods, and the gun fired via advanced primer ignition. This means there was a simple dimple machined into the bolt face that served as a firing pin. 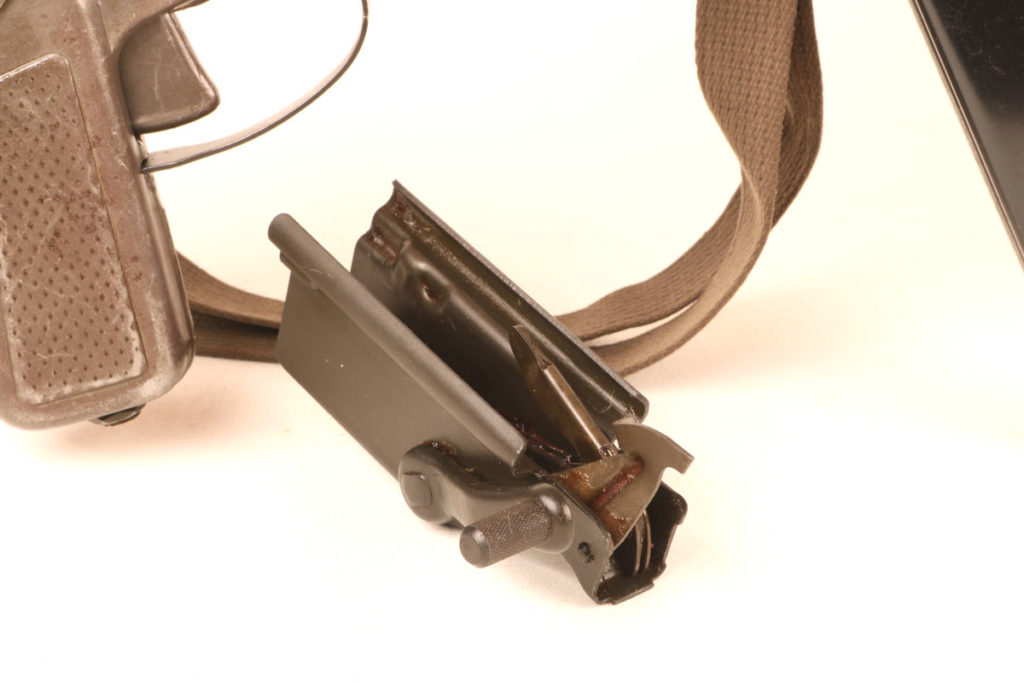 The earlier M3 employed an overly complex ratchet system for charging the gun. The later M3A1 did away with this superfluous device.

The Grease Gun was full auto only. However, the rate of fire was so slow that singles were readily possible so long as attention was paid to the trigger. The M3 used a tapered double stack, single feed magazine, and this was its greatest weakness. The same design was used in the British Sten gun and German MP40. These magazines were hard to load and susceptible to fouling. By contrast, the double stack magazine used by the Thompson was hugely better. 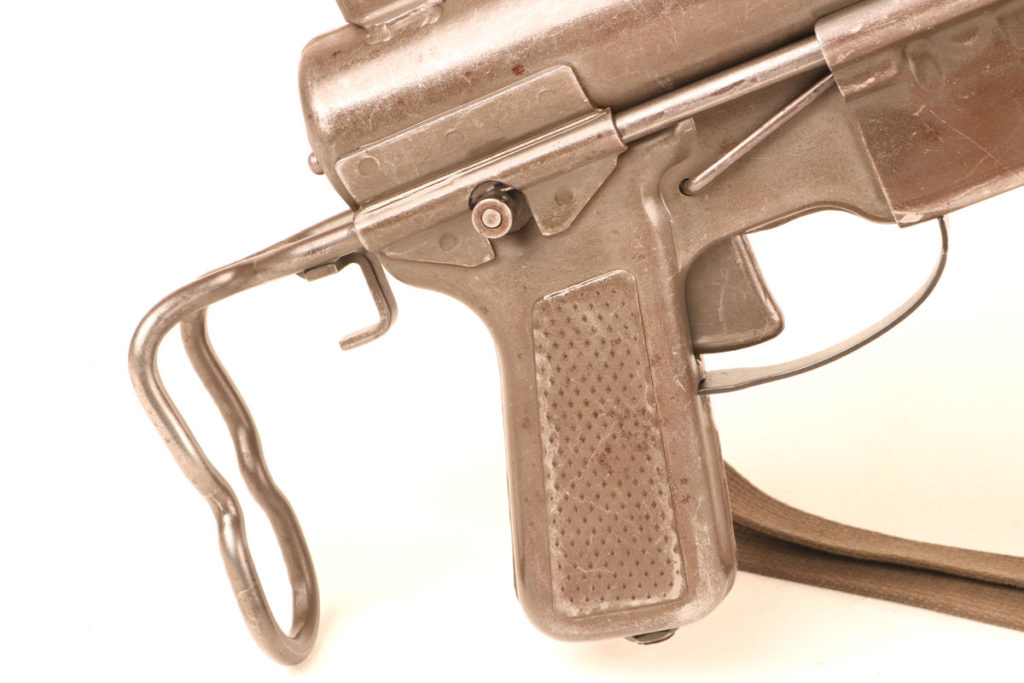 The pressed steel pistol grip on the Grease Gun was badly oversized. Additionally, the sliding stock eats uncomfortably into your wrist when collapsed. The angled bit of steel built into the stock is an inspired magazine loading device.

The original M3 incorporated a relatively flimsy and complicated ratchet mechanism for charging. The subsequent M3A1 did away with this cocking lever in favor of a simple divot in the bolt for the firer’s finger. The later model incorporated a serviceable magazine loader into the gun’s wire stock as well. The first use of the Grease Gun in combat in Europe was purportedly during the D-Day invasion in 1944. Around 700,000 copies were eventually produced. 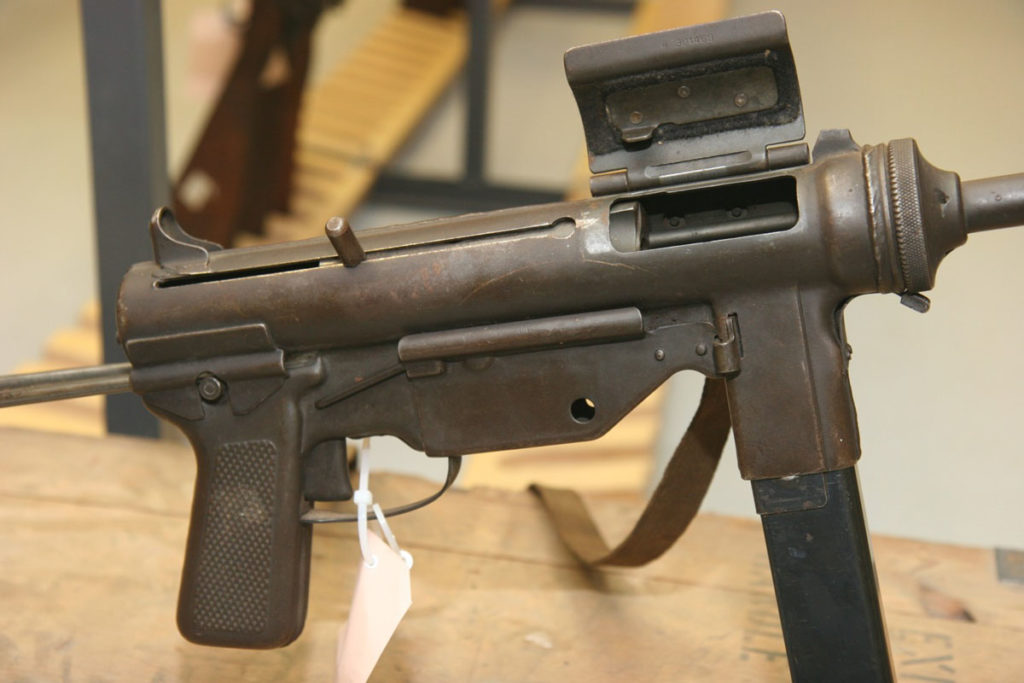 The ratchet mechanism of the M3 Grease Gun was prone to damage. An ingenious field modification involved removing the inoperative ratchet components and milling a longitudinal slot in the receiver to accept a simple steel charging handle.

The Grease Gun was originally intended to be disposable, so spare parts were not maintained in inventory. If something broke you were to run over the gun with a tank and go draw a replacement. However, innovative local armorers found a clever solution to getting M3 guns back in action if their ratchet mechanisms failed. In this circumstance, the ratchet components were removed and a slot milled along the top right aspect of the receiver. The bolt was then drilled to accept a simple rigid charging handle. Several of these field-converted guns turned up in Luxembourg after the war. 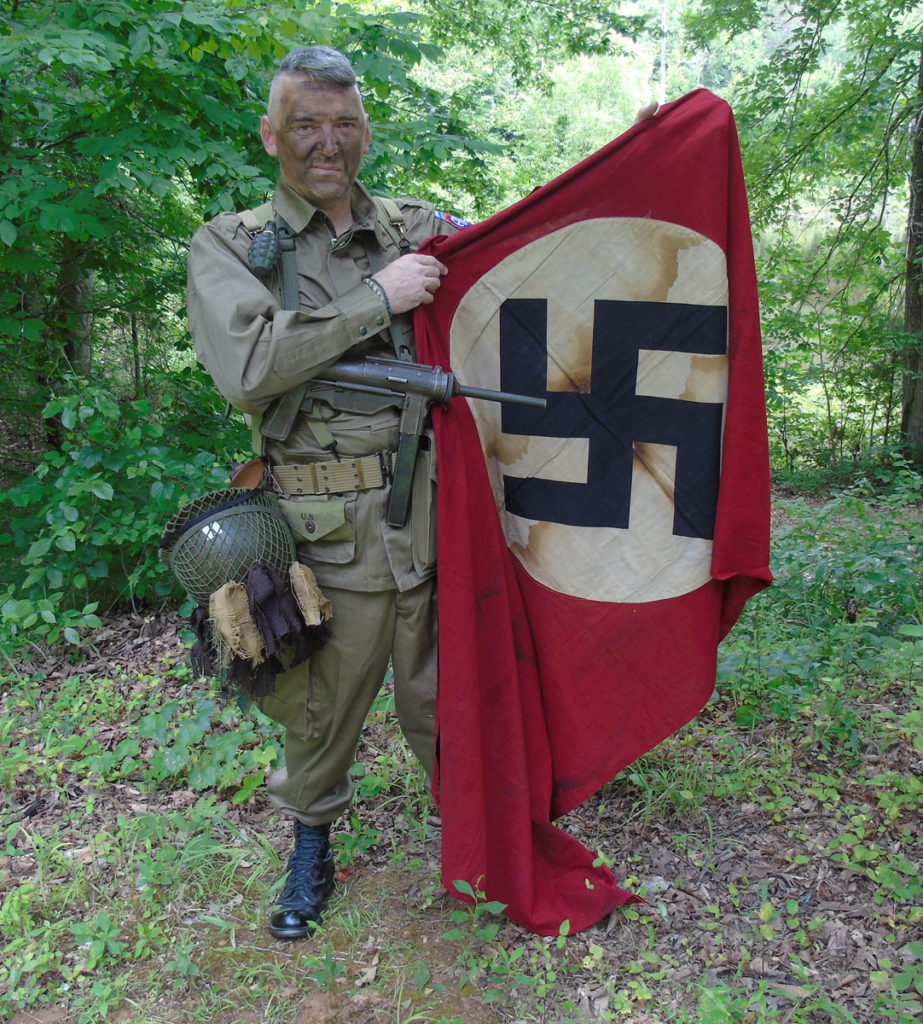 The Grease Gun was never as popular with American troops as was the Thompson. However, it fought all the way across Europe and was really the more efficient combat implement of the two weapons.

The pistol grip on the M3 Grease Gun is not designed for real humans, and the wire stock grinds into the wrist mercilessly when collapsed. When extended the stock is stable enough. With the stock extended the Grease Gun is comparably comfortable both from the shoulder and the hip.

The M3 Grease Gun offered US troops a compact and controllable submachine gun that was reliable in action and inexpensive to produce in quantity.

The sole safety on the gun is comprised of a steel tab on the dust cover that snaps in place to lock the bolt either forward or back. It is awkward to use quickly yet remains serviceable. There is a felt pad riveted into the inside of the ejection port cover. The sights are pressed into the receiver assembly and are subsequently quite fixed and thoroughly rigid.

The sedate 450-rpm rate of fire makes your magazines last a while, a particular benefit should you find yourself dropped behind enemy lines in Normandy with a full auto only gun and no ready source of resupply. The sling points are on the left, as they should be, and the gun accepts a standard carbine sling. Magazines are a holy pain to load even with the magazine loader.

The greaser is fairly heavy, so recoil is painless despite the prodigious .45ACP chambering. The gun is indeed quite compact and maneuvers quickly in tight spaces. The downrange effect at close ranges is undeniably impressive. 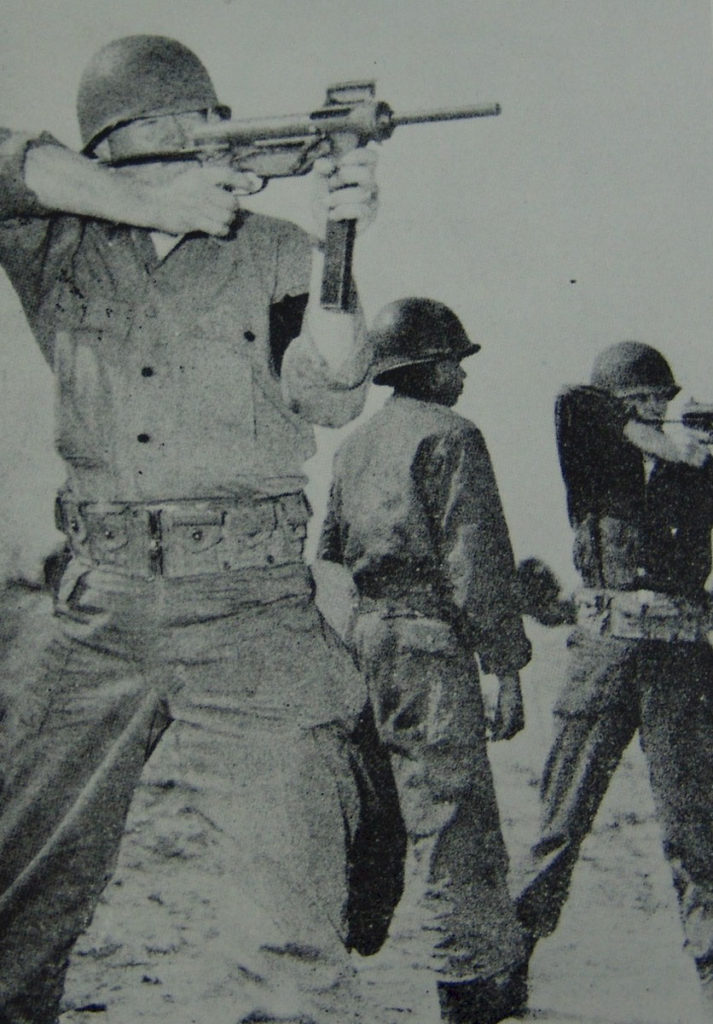 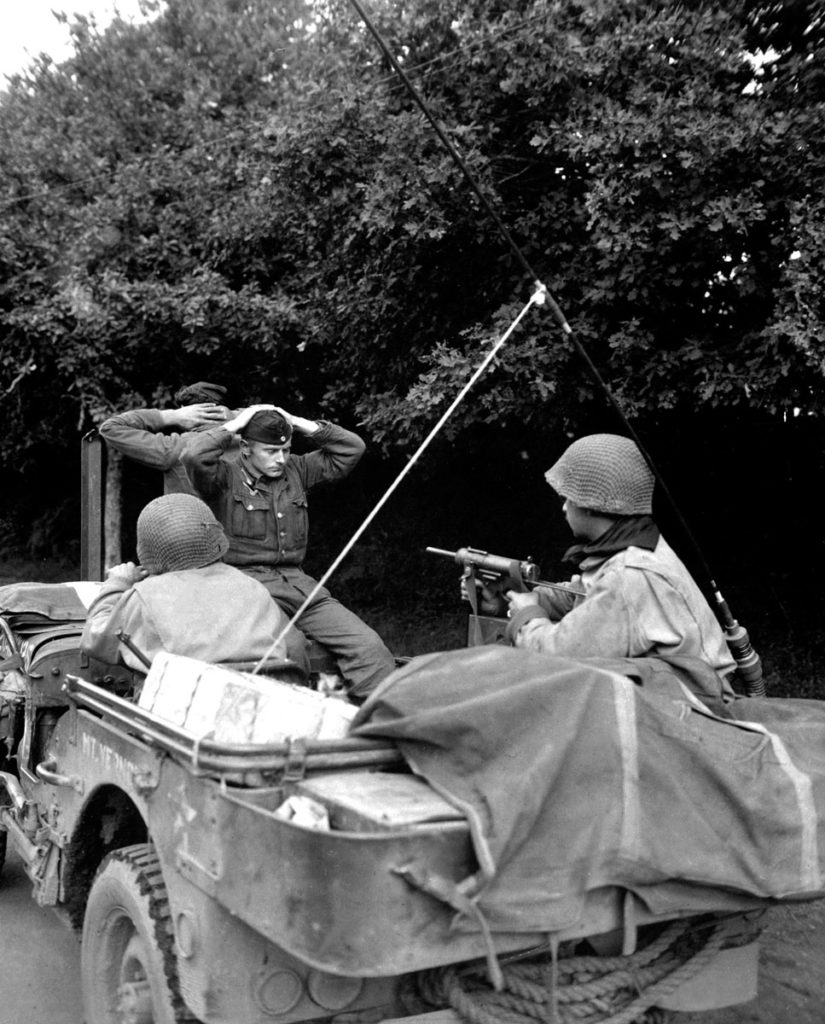 The M3 Grease Gun helped crush the Nazis and went on to serve for more than half a century in the hands of American troops.

There was a 9mm conversion kit developed for the gun to be used by the OSS in occupied areas where 9mm might be the only ammo available. The Grease Gun saw service during the Korean War, and we supplied thousands of these weapons to ARVN forces in Vietnam. Suppressed examples of the Grease Gun were found in the burned-out wreckage of aircraft abandoned in the Iranian desert during the ill-fated hostage rescue attempt in 1980. I frequently encountered Grease Guns in the hands of American armored vehicle crewmen when I was on active duty in the 1990s. A friend carried a Greaser that was off the books throughout the first Gulf War and ultimately buried it in the sand when he couldn’t find an arms room willing to take responsibility for it.

Despite the Grease Gun’s modest purchase price, transferable versions cost a holy fortune today. Relative few of these old guns made it into the registry before the machinegun ban of 1986, and their astronomical purchase prices reflect their rarity. I once met a man who carried a Grease Gun in Vietnam and smuggled it back home after building a lamp out of it in theater.

Ugly, cheap, and functional, the Grease Gun was a simple gun for desperate times. Initially disparaged by those to whom it was issued, most American troops developed a grudging respect for this simple pressed steel battle implement. Despite the weapon’s humble origins the Grease Gun went on to render effective service around the globe in the hands of American soldiers for half a century.

Special thanks to worldwarsupply.com for the period gear used in our article.