Review: The M48 Nosler Custom Handgun. Steady As She Goes!

I was halfway into my third box of 22 Nosler ammunition and I still hadn’t hit a bullseye at 100 yards. I’d run through my usual list of excuses—the gun, the ammo, the optic—and now had to examine the real problem.

I was shooting the new Nosler M48 Nosler Custom Handgun (NCH) bolt-action, this particular one chambered in 22 Nosler. I was firing the pistol off my shooting range’s benches, a sandbag under the front of the M48’s handguard, while my right, shooting hand, and arm rested on a pad. But that still left my left arm and hand unsupported, and— the light bulb went off!—that slight shake helped pull my shots time and again.

So, I took my shooting table and angled it to the left, giving me more surface on which to rest both arms and hands. Plus, I slid a bench up behind the table to get off the shooting tables smallish uncomfortable seat. My range features several of these one-piece shooting platforms with built-in seats, and while they are solid, the set-up is too small for anyone whose last name isn’t “Baggins.”

Then, I re-positioned my sandbag, braced it with another bag, and laid out a pad behind the handgun to support both my arms. 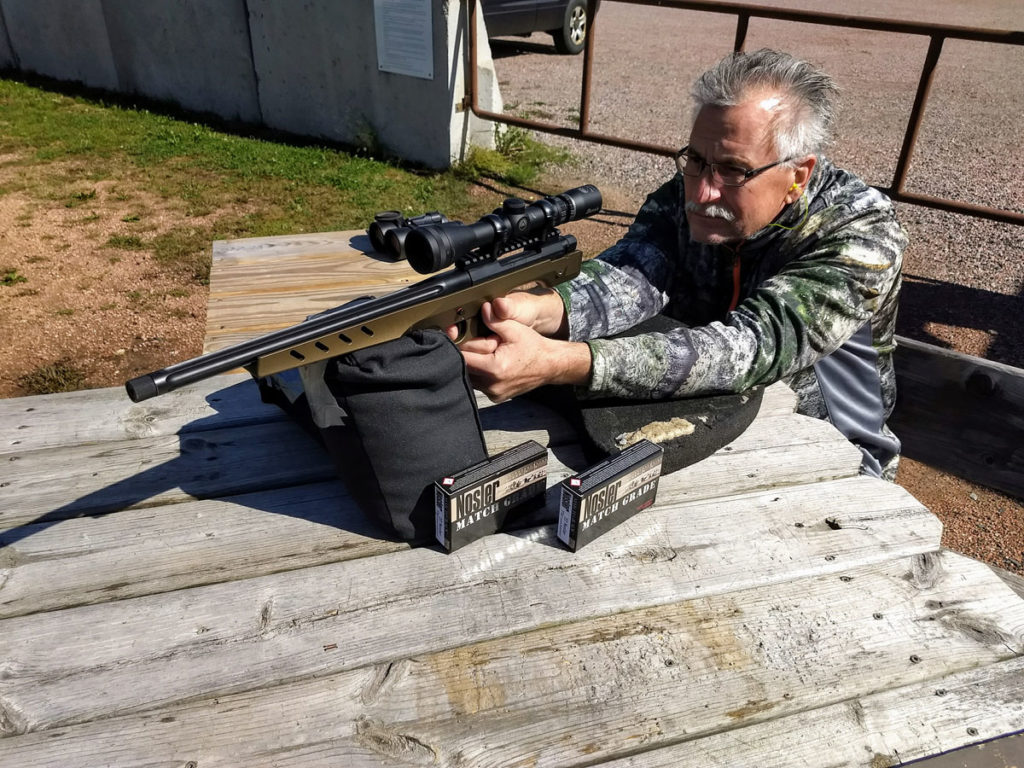 With some rearranging of his range’s shooting table, the author finally found a very stable set up for testing Nosler’s M48 Handgun.

And the bullseyes started to pop. Not at every shot by any means. But as long as I was steady, the M48 NCH proved to be an MOA handgun at 100 yards.

Nosler debuted its line of M48 rifles in 2006, featuring a push-feed bolt-action system.  The bolt itself has two large, Mauser-style front lugs which lock in place very solidly, and a beefy extractor which flings out the spent brass.

The new M48 handgun employs the same stout bolt-action as the rifle, but with, of course, a shorter barrel. Not terribly short, though. My model M48 has a 15-inch barrel and can be had in lengths between 12- and 18-inches. The M48 NCH is a single-shot; available calibers are all center-fire short actions, from 22 Nosler up to .308 Win. 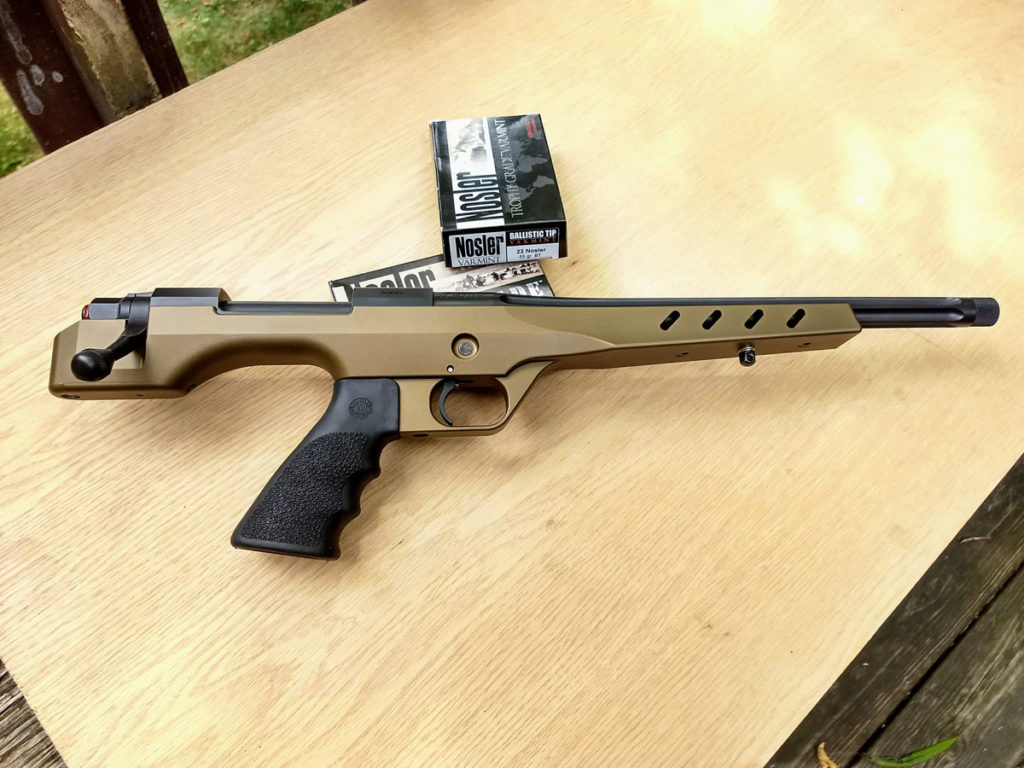 The M48 Nosler Custom Handgun is a single-shot, bolt action that should be able to take down deer-sized game out to 200-yards without a problem.

The stock is a single piece, made from billeted aluminum and very rigid. The handguns come Cerakoted, with many color options available; mine was made in Desert Tan. A push-button safety is located in the stock, just above the trigger. The Hogue OverMolded pistol grip has finger grooves and provides a solid anchor point, though some texturing or stippling along the backside of the grip would add stability.

The M48 has no sights. I installed a scope on mine, a 3-12x32mm Burris Handgun Scope, attaching it with a set of Burris Signature Zee Rings. First, I mounted a Leupold Picatinny rail atop the receiver, a Backcountry Cross-Slot, Short Action, 20 MOA (P/N 175218). 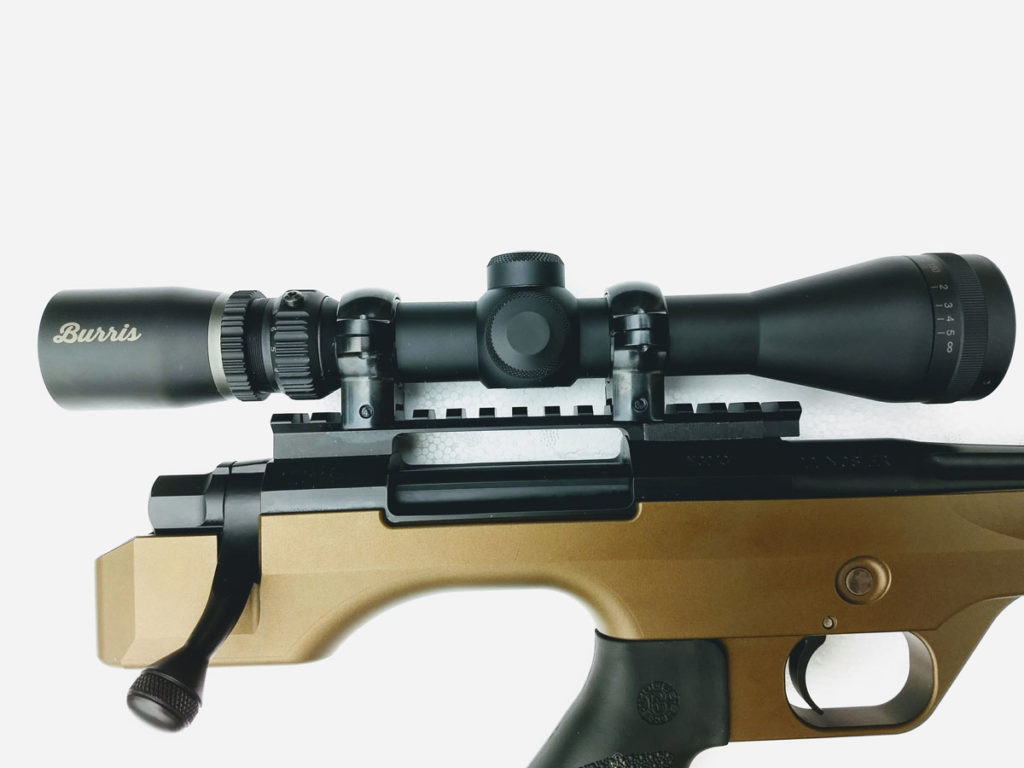 All my ammunition was provided by Nosler because, well, they are the only ones making 22 Nosler ammo! For my general shooting and accuracy testing, I used three different 22 Nosler loads: the 55-grain E-Tip hunting rounds, 62-grain Varmageddons, and Match Grade 77-grain Custom Competition rounds.

I also ended up using three-shot groups versus five-shot groups, as I felt it would give a better sense of the M48 NCH’s true accuracy potential—given how steady the pistol needs to be for precision shooting and my tendency to shoot too fast, three shots pretty steady were better than three steady and two not so much (which is what invariably happened when I tried five-shot groups).

My best three-shot group was .706-inches firing the 77-grain Custom Competition rounds, followed very closely by a .712-inch group with the 62-grain Varmageddons. In both groups, by the way, two of the bullet holes were touching each other. Best group with the 55-grain E-tips was a very respectable .869-inches. 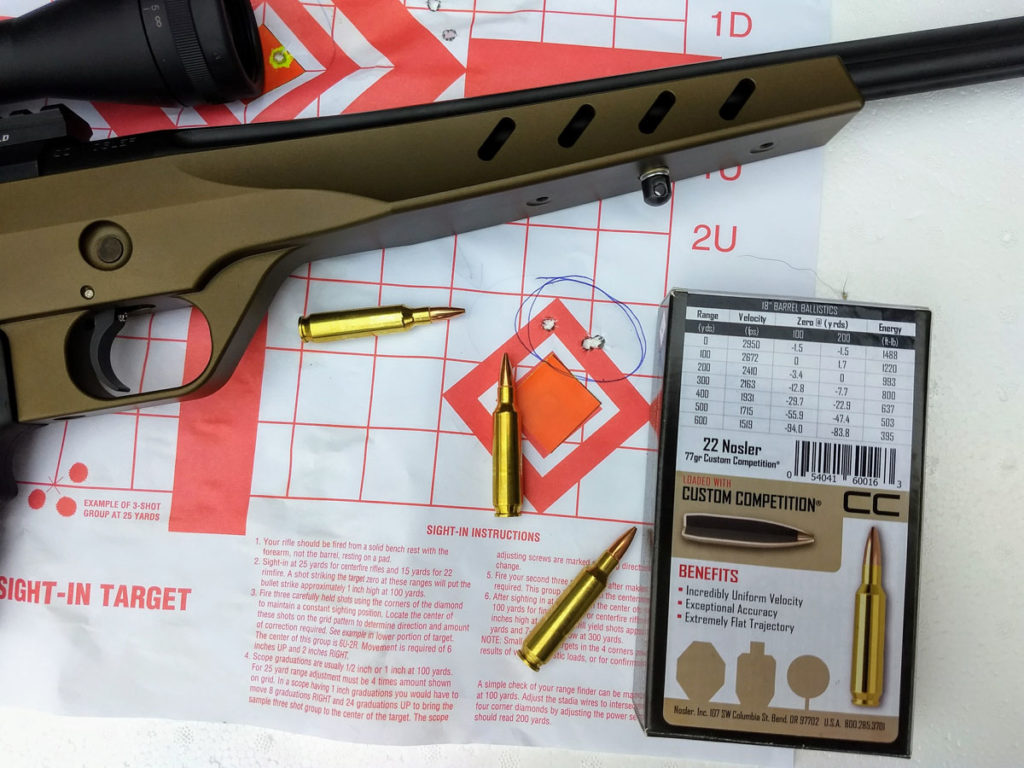 Group averages were based on five, three-shot groups fired from 100 yards.

By the way, while all the 22 Noslers are speedy, the E-Tip rounds are screamers. My PACT Professional-XP Chronograph measured 10 shots of the E-Tips at an average of 3,036 feet per second (fps).

The trigger on the M48 NCH is a very good one, and my Lyman Digital Trigger Pull Gauge measured it out at an average of 1.75 pounds of pull. I do wish the trigger had slightly less take up. I adjusted the trigger via the hex head screw on the front and top of the trigger, and it helped. But I’d still like a bit crisper trigger to help tweak up the accuracy.

A friend of mine thought Nosler should’ve positioned the bolt on the left side. For a right-handed shooter, he argued, a lefty bolt would allow the shooter to keep the right hand/trigger finger in place, open the bolt and load with the left while keeping his or her eye on the target.

I don’t think so. The bolt on the M48NCH isn’t hard to work, but it takes some strength and practice. For me, a left-sided bolt would be so awkward, there’s no way I could somehow keep the handgun on target and open the bolt, load a new round, and then push the bolt back into place.

As far as working the bolt, mounting an optic on the M48 NCH does make the process a little trickier. When fully opened, there’s only a half-inch of space between the bolt handle and the right side of the Burris scope. The best way I found to open the bolt? By placing my right thumb on the back of the bolt itself with my index and middle fingers around the bolt handle, and using the end of my thumb as a leverage point to begin opening the bolt. As the bolt came up and the tension on it was released, I removed my thumb and completed the cycle. 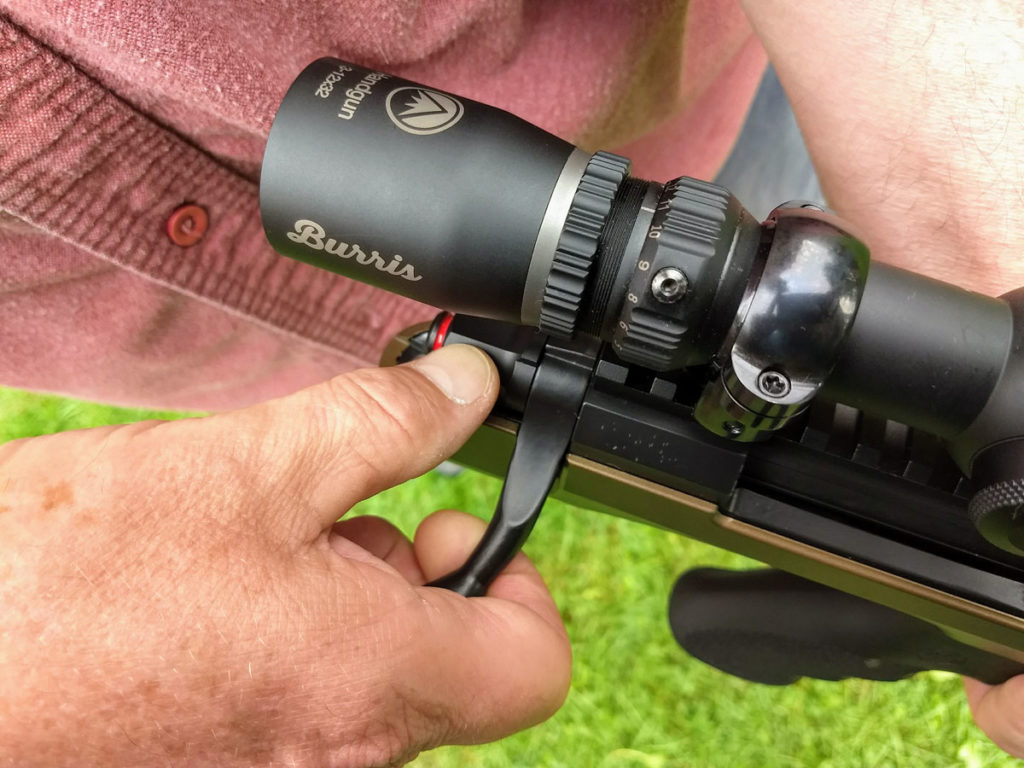 Best way author found to work the bolt: right thumb at the rear of bolt for leverage, index, and middle around the bolt handle.

All the while, my left hand grasped the handgun mid stock.

Given the power of the 22 Nosler rounds in general, my M48 NCH rocked back from the recoil and muzzle blast. I assume the other calibers available for the handgun will produce similar recoil. My suggestion? Don’t even try to hold the pistol down and in place.

I found my best grip on the M48 NCH was to hold it pretty much like I would a 1911 semi-automatic pistol, with the handgun’s fore end resting on a sandbag.

But won’t the handgun come back and up off your rest? Yes. But with at least eight-inches of eye relief on the Burris handgun scope, you won’t scope-cut your face. Also, given the angles of your hand to the handgun, holding it still is likely not possible, anyway.

I see the M48 NCH as a hunting handgun which challenges the hunter to substantial practice, finding suitable rests afield and get closer than he or she would with a rifle. It’s also a lot of fun to shoot, once you get used to it, and yes, it is pricey. But it truly is a custom handgun—not exactly what every hunter wants, needs or can afford. With the right ammunition, it should be a 200-yard deer killer, and capable of taking down coyotes and other varmints at even further ranges.