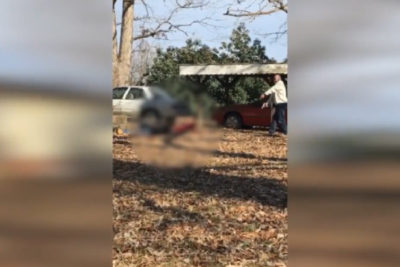 These burglars got more than they bargained for over the weekend in North Carolina. (Photo: Fox News/Screenshot)

A North Carolina man used his handgun on Sunday to force three would-be burglars to the ground and hold them until police arrived.

Stephen Routh takes care of his parent’s vacant home in Asheboro, N.C., and when he heard about the intruders from a neighbor he grabbed his gun and went to investigate.

“I stood there about three minutes, and three males started to exit the house. I had the gun and they were coming out, and as soon as they saw the big gun pointed at them, their hands went up,” Routh told local media. “They almost crawled from the porch, down the steps, and onto the ground.”

“The policeman said it best,” Routh observed. “They’re lucky I didn’t shoot them cause I had every right to put a bullet in somebody.”

The intruders didn’t try to take anything, but they did ransack the home, breaking a door and scattering Routh’s parent’s belongings across the house.

“It is a terrible mess,” Routh said. “All the drawers are askew, cabinets drawers have been opened, stuff thrown out, papers everywhere.”

The Daily Mail reported that the three intruders were all juveniles between the ages of 14 and 17. As such, neither their charges nor their names will be released to the public.

Despite their age, Routh said they should have known better.

“They know this is not their home. They know they had no business in here, and they mentioned they just thought they would just go in there and look around,” Routh said.

Routh observed that the situation could have turned out much worse and warned that law-abiding citizens will be increasingly likely to use their firearms to defend themselves, their families, and their property.

“There have been too many instances lately of home invasions and these like this where they get caught. And some people have been shot and killed especially those home invasions… People are not taking this mess anymore,” Routh said.

Whether Routh actually had the legal right to “put a bullet in somebody” might be a trickier issue than it appears. North Carolina’s Castle Doctrine statue specifies that “defensive force” may be used by the “lawful occupant” of a “home, motor vehicle, or workplace.”

Since the home being burglarized was Routh’s parent’s, not the mention the fact that he wasn’t in the home at the time of the incident, his right to use deadly force against the intruders isn’t as clear-cut as many self-defense incidents.

Next post: Connecticut State Rep Wants to Tax Ammunition at 50% to ‘Reduce Use’