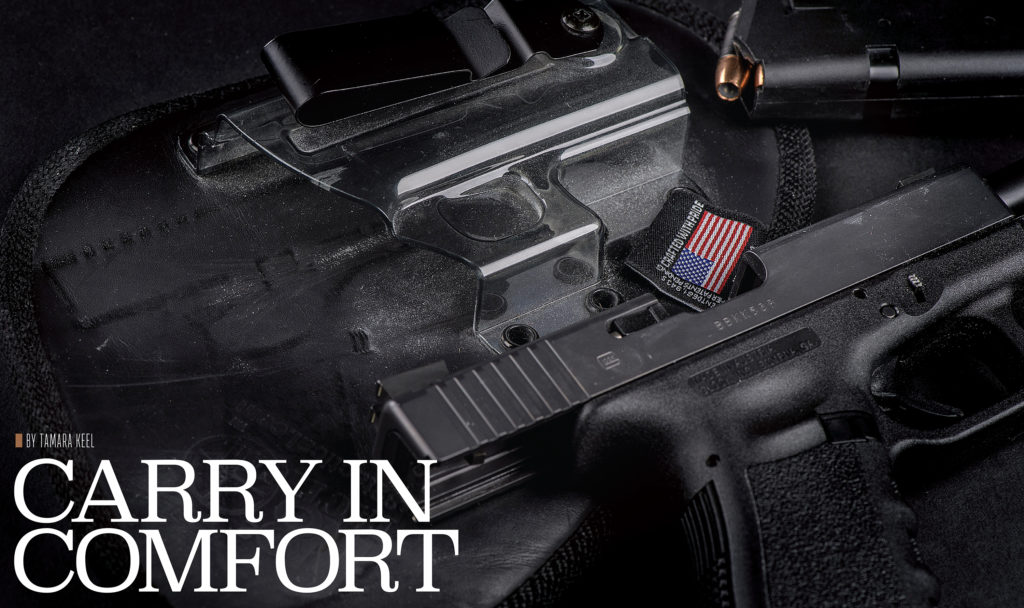 Editor’s Note: The following is a syndicated article by author Tamara Keel that first appeared in USCCA’s Concealed Carry Magazine Volume 15, Issue 3, April 2018 under the title, “Carry In Comfort.”

If there’s anything that keeps people from carrying their handguns with them as they go about their daily business, it’s … well, probably laws or company policies. But the next most common reason would be issues of comfort. I’ve known many people who get their concealed carry permits with the best intentions of becoming armed citizens, only to become occasional toters or, worse, stop carrying altogether because the discomfort of packing heat causes them to leave their guns at home.

There are a number of simple pointers that might not be immediately apparent to the new handgun carrier that can dramatically mitigate any discomfort caused by carrying a gun. Done right, a concealed carry piece can be so comfortable that you stop noticing its presence and, indeed, might have to pat your holster to make sure it’s there before you leave the house.

One of the first things to do is to “rightsize” your gun based on how you carry it. I say “rightsize” rather than “downsize,” because smaller is not necessarily more comfortable. Carried on the beltline, a barrel that’s too short tends to put too large a percentage of the gun’s mass above the belt.

The second thing to consider is that weight matters, and balance does too. An orthopedist will tell you that walking around all the time with an unbalanced load of a couple of pounds strapped to one hip is the ticket to gait issues and back problems down the road.

One solution is to lighten the load. Looming back issues are part of the reason I switched from a full-sized, all-steel 1911 to a polymer gun, although I could have switched to an alloy-framed 1911 or a Commander-sized gun as well.

Another remedy is to balance the load with a spare magazine carrier on the other side. That’s the natural place to carry an EDC flashlight as well, although I counsel against those double flashlight/spare magazine belt carriers. I’ve seen more than one person try to stuff Surefires into their pistols’ magazine wells mid-string.

The right belt will make carrying a lot more comfortable if you carry at the waistline. What the right belt looks like will vary some depending on your carry gun and its location on the belt, but the wrong belt always looks narrow and is usually braided. Carrying at or behind the hip, you’re going to want a fairly rigid belt that’s intended to carry a pistol. This will keep it from rolling over and causing the gun to flop and bounce as you move about. If you carry IWB in the appendix position, however, a more flexible belt will allow the holster to shift naturally when you sit and stand.

The right holster matters a lot too. In a pocket holster, it should fit the dimensions of the pocket well enough that it doesn’t have room to move around much in there. This can also be accomplished with a holster that has a tacky exterior that grips the pocket lining. On a belt holster, the belt loops should be sized to the belt to prevent it from sliding and shifting around. This is also an aid to a safer, more fumble-free draw, since if the holster is free to shift up on the draw before abruptly stopping, there’s a tendency to “double-pump” the draw — and that’s how fingers end up in trigger guards.

I personally avoid holsters that promise to do too much. If a holster boasts that it can be worn inside the waistband, outside the waistband, on the belt, clipped to the pants, mounted to a drop-thigh rig and converted to a shoulder holster, odds are good that it won’t be as comfortable and efficient at any one of those locations as a holster specifically designed for one place.

One final tip on comfort: With a belt holster, unless there’s some mechanical action locking the gun in place, like that on Safariland’s GLS, avoid any one that is advertised to fit multiple different makes and models of guns. One-size-fits-all holsters generally fit no particular size very well.

Keep these helpful hints in mind and you’ll be carrying in comfort for years to come.

Next post: Venezuela is a Case Study for What Can Happen to a Disarmed Population