Mossberg 590A1 Retrograde – A Birthday Present from Mossberg to Us 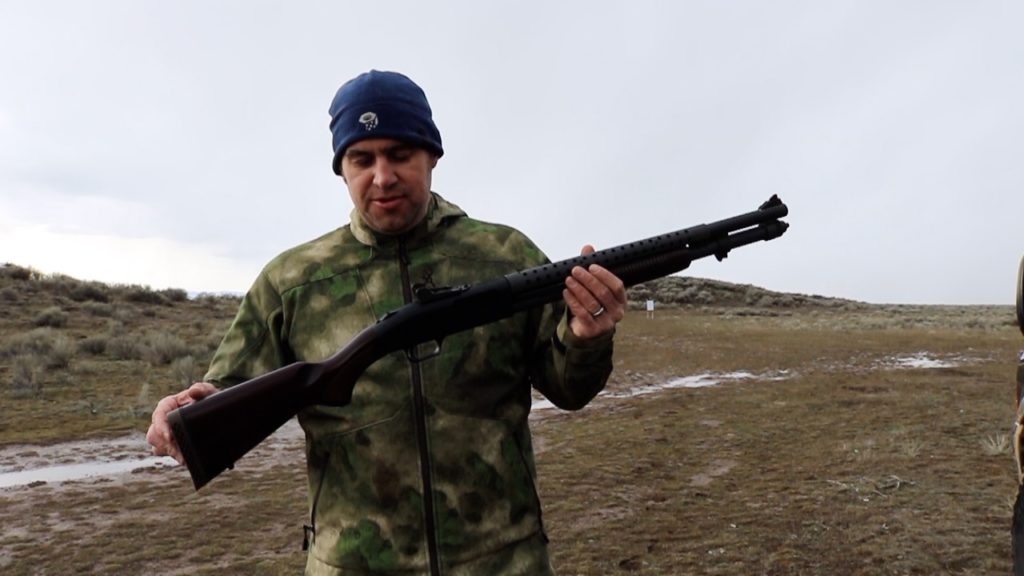 Mossberg turns 100 this year; ten consecutive decades of leading the charge in high-quality American firearms. And on that centenarian anniversary, they have decided to make something special, the 590A1 and 500 Retrograde editions. Fitting, I think, that they chose these shotguns. While Mossberg has created every type of firearm under the sun in the last hundred years, including a new pistol, the name Mossberg is to most of us synonymous with shotguns. As well it should be. Since its introduction in 1961, the 500 series has sold over 10 million shotguns. So here’s to you Mossberg and 10 million more. 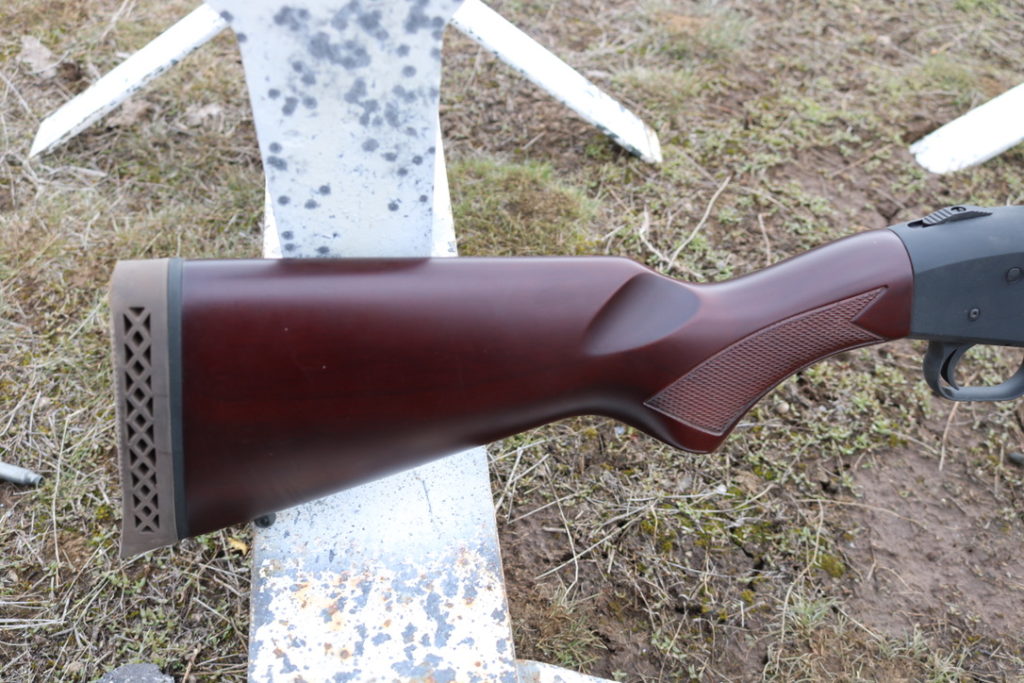 When the Retrograde models where announced, I was given the option of the 500 Persuader or the 590A1 for review. And that was a tough call, as I think it will be for you as a buyer. I really like how Mossberg approached the Retrograde concept, with the option of the 500 or the 590A1 set up slightly differently. The primary difference is the barrel length, though there are material differences as well, that we will elaborate on shortly. The 500 has an 18.5-inch barrel, with a 6+1 capacity. The 590A1 has a 20-inch barrel, full-length magazine tube, and an impressive 9+1 capacity. Mossberg understands the combat shotgun market, and it shows. Those are the two most common barrel lengths, with die-hard fans of each. Right from jump street, I appreciate that Mossberg made an option for both camps. 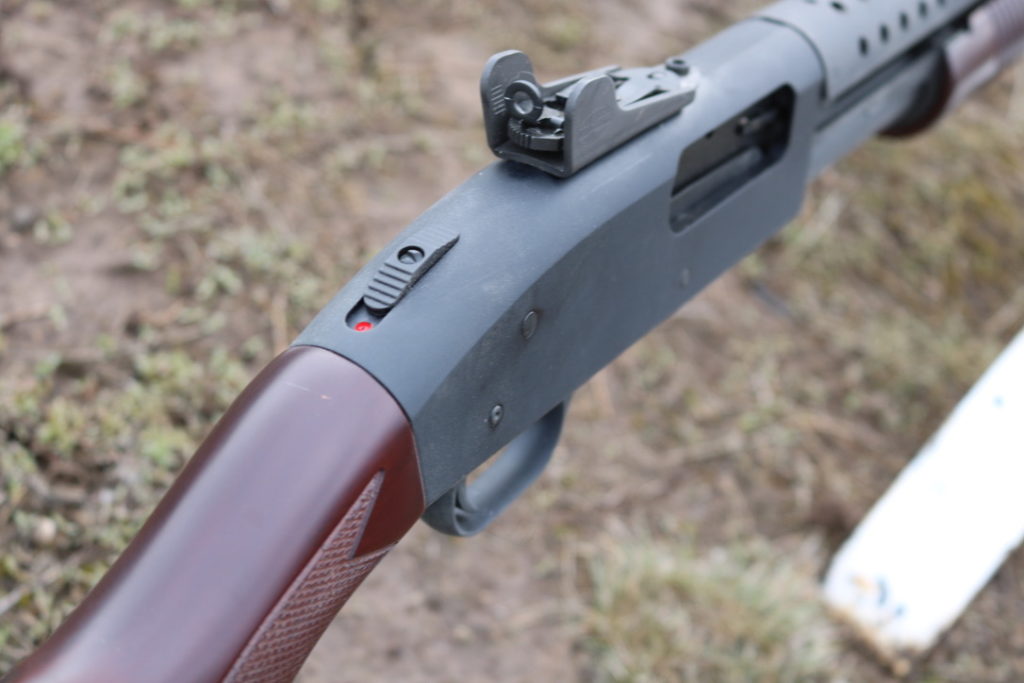 I opted for the 590A1 and I don’t regret that choice. But before we get into the nuts and bolts, what is the Retrograde concept? It is basically an old school look while retaining all the technical advances shotguns have made in the last 100 years. In this case, the look means a Walnut stock and forend, complete with an old school brown rubber butt pad. And the furniture change means a lot in this particular case. Complete with the corncob forend, the Retrograde hearkens back to another time. It wouldn’t be completely out of place as the Old West was ending. For some, it is going to remind them of a classic WW1 trench gun. ( Yes, I know that was a Winchester. I’m talking about feels, not rigid historical accuracy.) For me, it takes me to another place not that distant, but still before my time. When I was a young Marine, I remember seeing lots of pictures of 80’s era Jarheads running a wood stock shotgun like this one. Not the recruiting pictures they stage, but real pictures on the wall from my units. The scattergun in those days was a staple of ship boarding operations, and much more common in general use than now. Lots of weird stuff happened in the 80s you won’t find in any history book, but the memory lives on with the old hands and the pictures. The Retrograde to me says awesome hair, flight suit, and a really bad attitude cause Ronnie Reagan told us to. Holding it in your hands, you can almost hear the rotors spinning on a Huey and “boarding party to the flight deck” coming over the 1MC. That alone is worth the price. 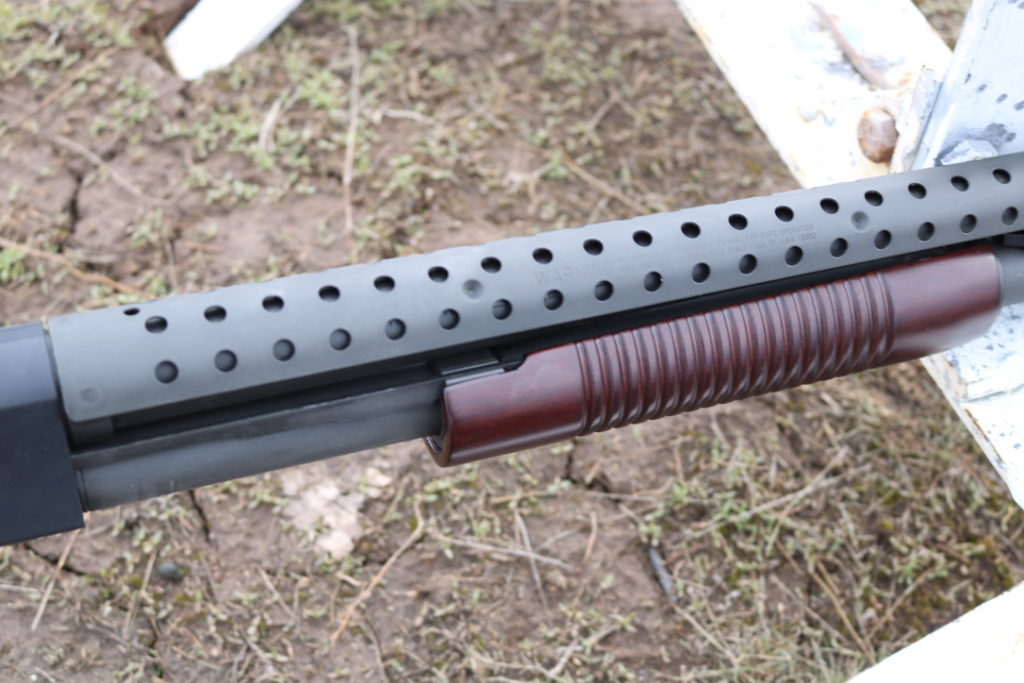 It is also probably fitting that the 590A1 says that to me since the A1 part is due to modifications Mossberg made to accommodate the Mil-Spec 3443E test. This is a for reals military grade weapon, and it feels like one. When I first pulled the Retrograde out of the box, I was kind of surprised by how heavy it felt. The longer I messed with it, the more I thought it couldn’t be just a change from polymer to wood furniture. I compared it to my 590M, and there was a noticeable difference. A look at the Mossberg spec sheet confirmed it. The 590A1 features a heavy walled barrel, specifically requested by the US Navy. I don’t know a single person that can claim to have shot the barrel out of a regular 590, a task I would think impossible. But if it was a concern, no more. The overall weight change does have an upside though. The 590A1 is one of the most robust feeling weapons you will ever pick up. 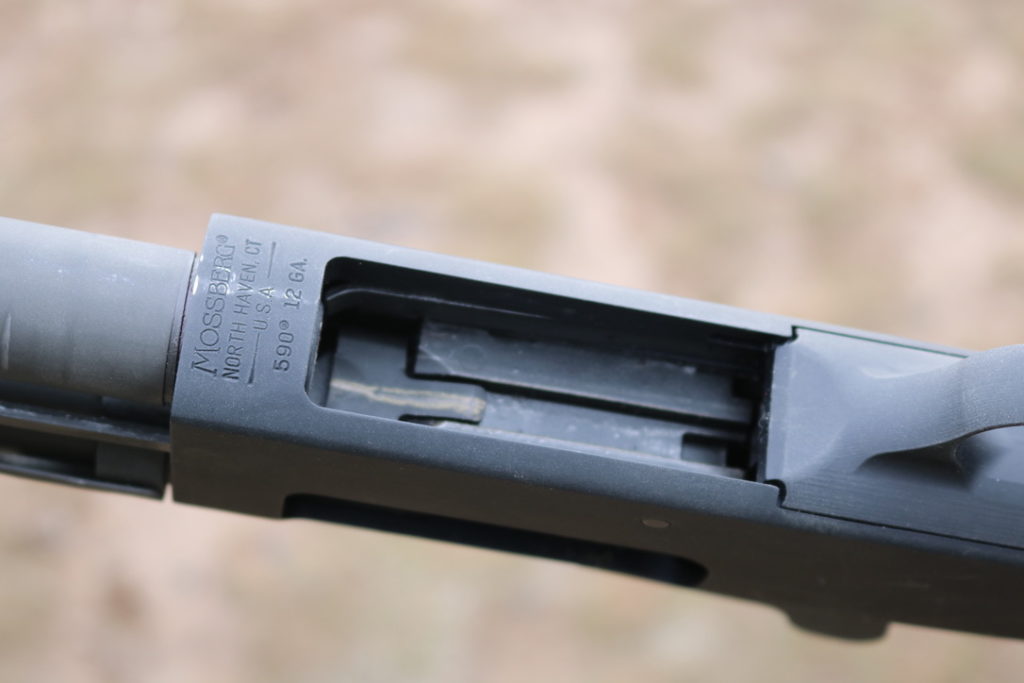 Another mil-spec feature, the 590A1 series has a heavy parkerized finish. Despite its beauty, this shotgun was meant to be abused. Snow to salt water spray, this bad Johnson was built to take punishment. 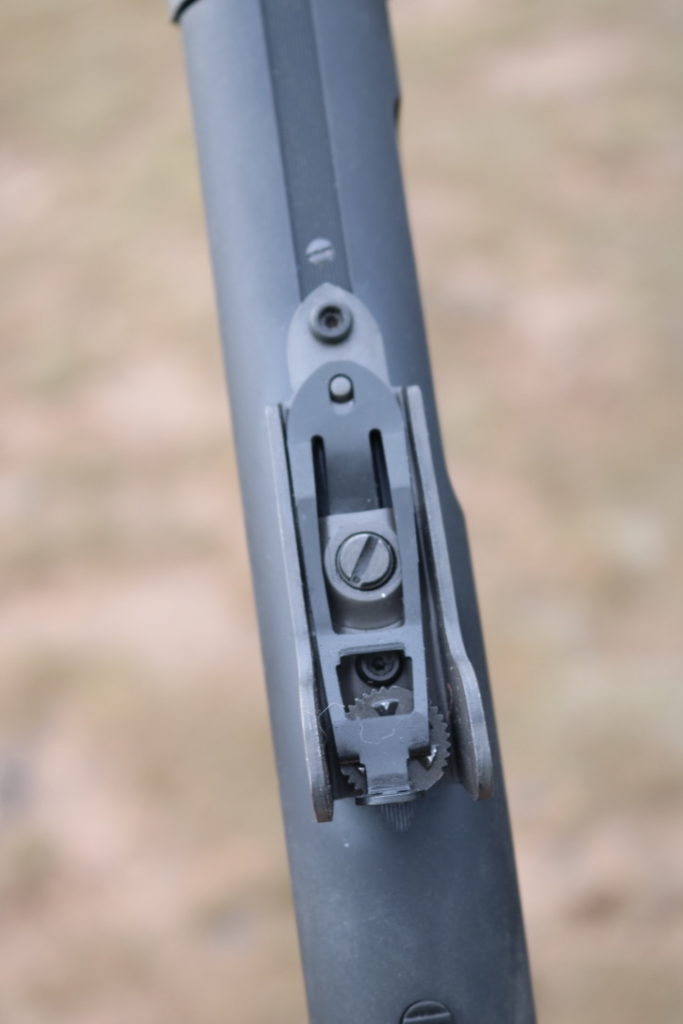 True to the 590A1 family, the Retrograde edition has all the same bells and whistles. It has a heat shield on the barrel, which is actually a huge benefit if you run your shotgun hard. It has adjustable Ghost ring sights, with a best in class front blade. Even in low light or a snapshot, you aren’t going to miss that big orange front. And it has a bayonet lug, compatible with the M-9 bayonet, in case things go absolutely pear-shaped. 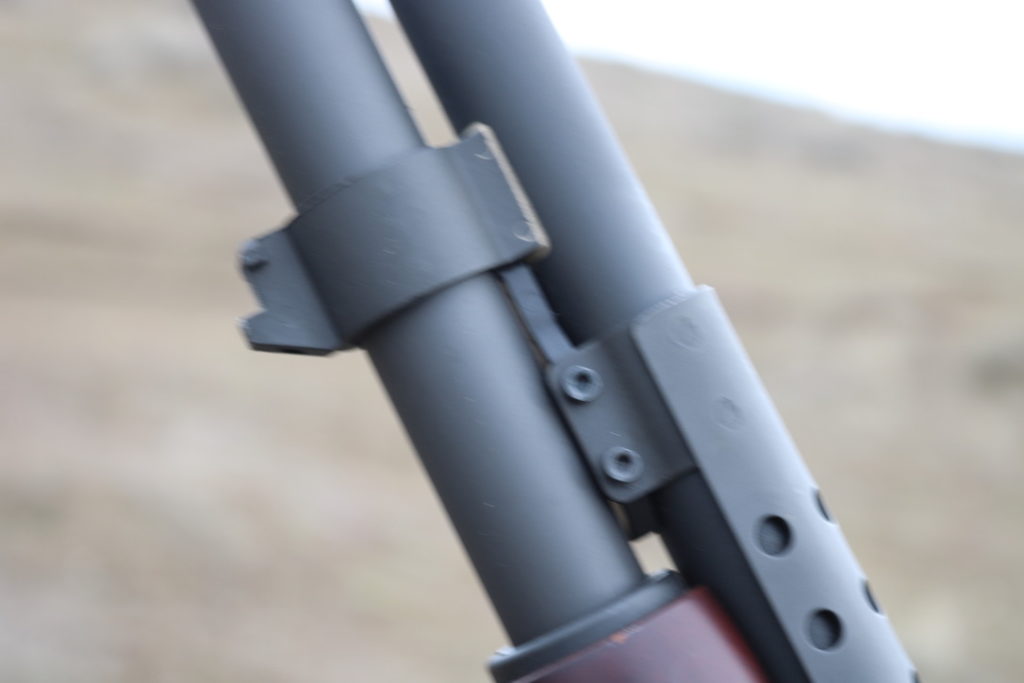 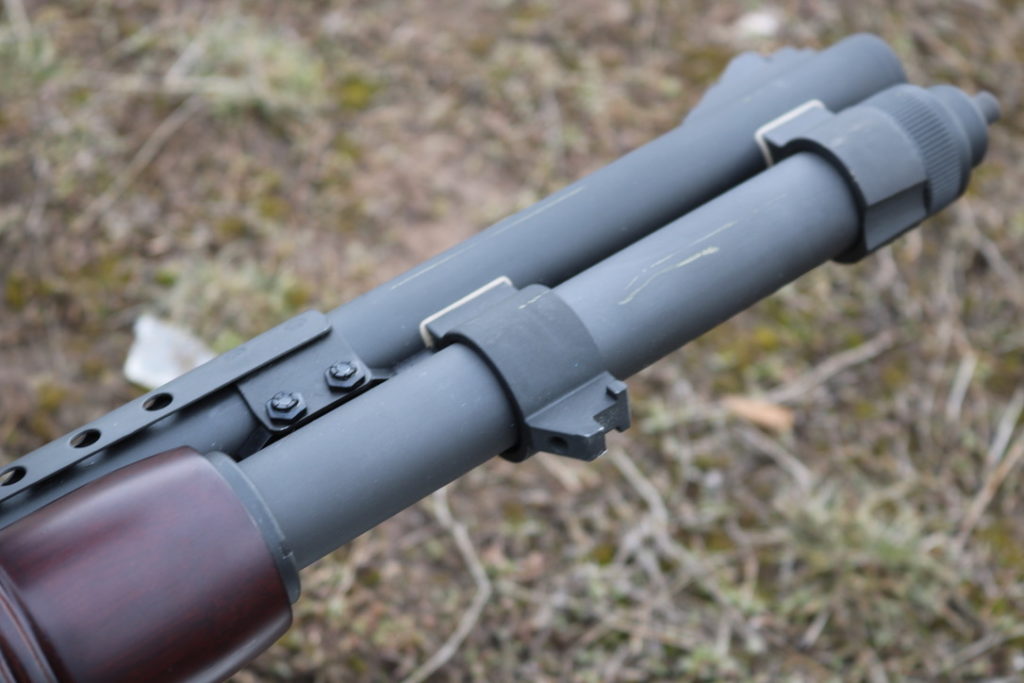 Performance wise, I could not be happier. The 20-inch barrel is a fixed cylinder bore, which is perfect for the intended use. Out of the box, the Retrograde put lead on target at 100 meters with slugs, in a respectable group. I’m not what you would call a fantastic slug shooter, and it still got the job done for me. I ran a few of the notorious Federal Grand Slam turkey loads through the 590A1, the same shell that made me quit after 1 in the Mossberg Night Stick. With the rubber butt pad and overall weight, the Retrograde tamed them nicely. You could easily run a box out of this shotgun and be none the worse for wear. Most importantly, the 590A1 patterned buckshot nicely, and exactly where you aim it. 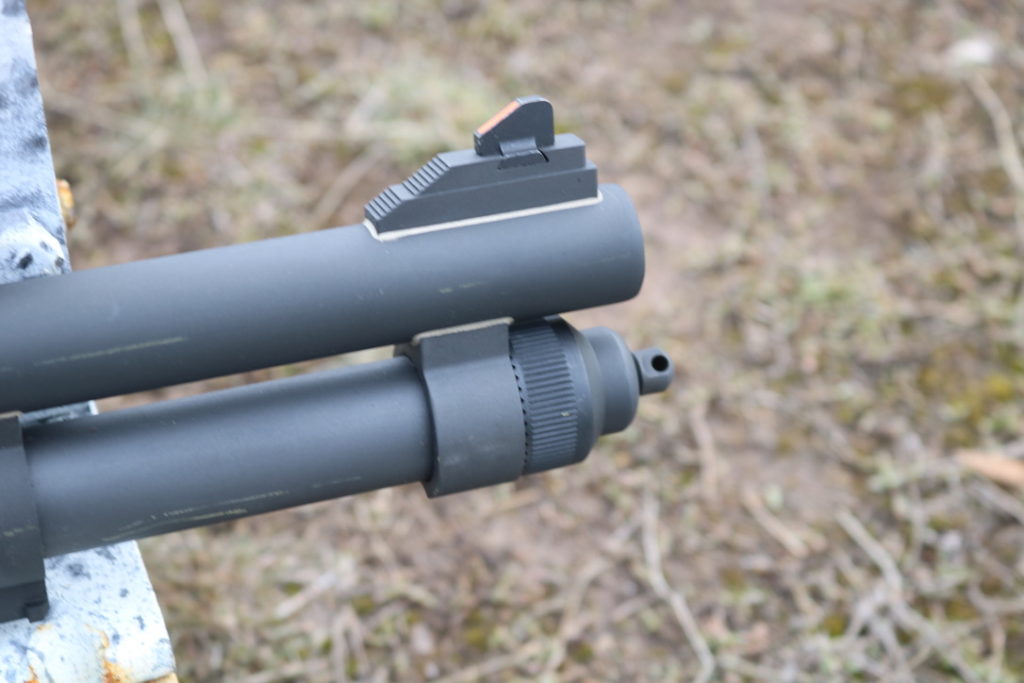 A front sight you aren’t likely to miss. 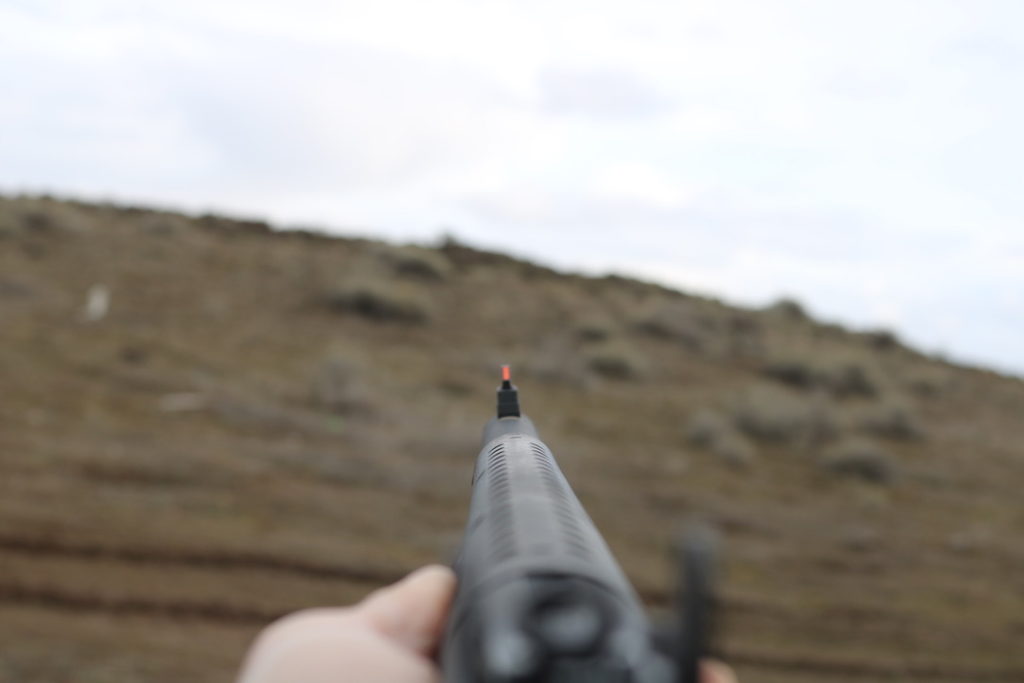 The action, however, that is what blew my socks off. Being mostly unfamiliar with the 590A1 model, I actually called Mossberg to see if they did something special for the Retrograde. Because it is smooth like butter on the pump. They did not. This is just normal for the 590A1’s. Which is absolutely amazing, even fresh out of the box. Most pump actions require about 1000 rounds before they smooth out, and I still haven’t seen many that will match it. None made in the last two decades. This is my new gold standard for pump actions, and I actually feel sorry for the one I have to review next. 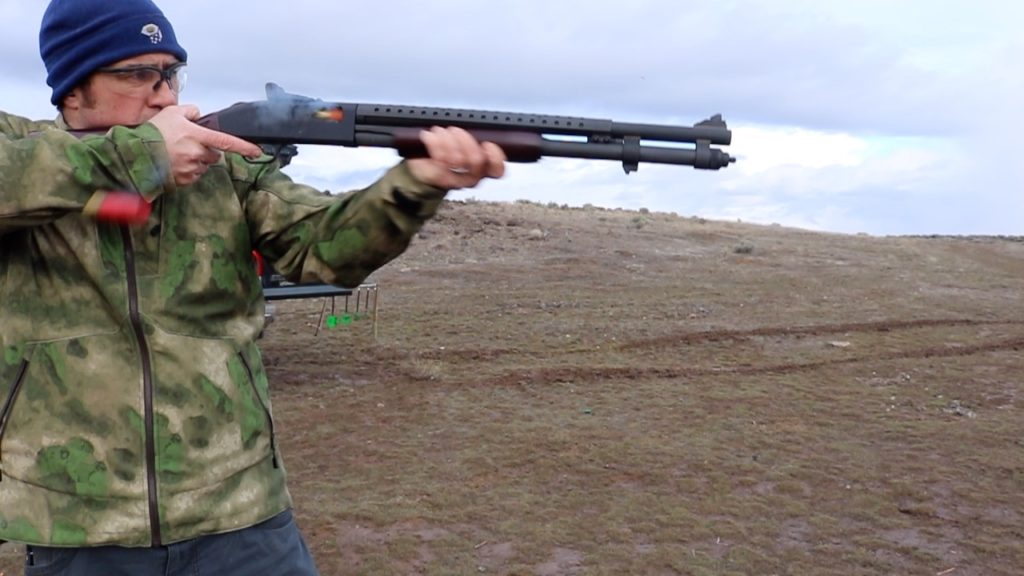 Overall, this is a very cool gun. If you were going to have one shotgun in your life, this would be my recommendation. Between the unique look, robust build, and Mossberg reputation, I don’t think you can beat it. If you want one, get it now. You might have to wait another hundred years if you don’t. 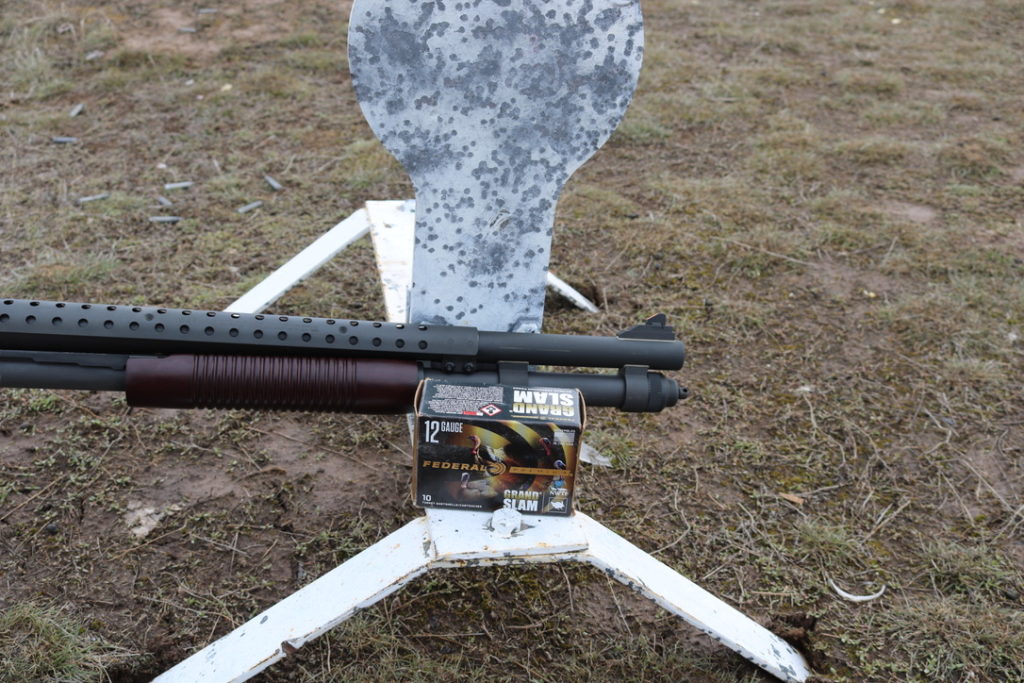 It even tamed the Federal Grand Slam Turkey loads.