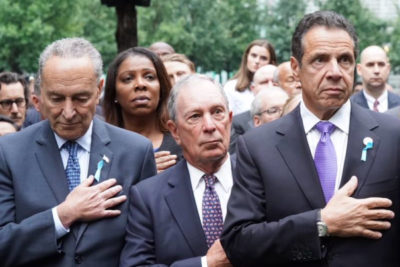 In the race between New York and California for the honor of the nation’s most anti-gun legislature, the Empire State may be taking the lead.

On the heels of several sweeping anti-gun measures, the New York State Senate and Assembly passed a bill this week that would require gun owners to lock their firearms separately from ammunition whenever a child under the age of 16 is present in the home. The bill, A02686, is headed to Gov. Andrew Cuomo’s desk where his signature is all but guaranteed.

Supporters of the bill claim that the policy is intended to stem the apparent tide of accidental deaths and injuries minors commit with firearms.

“All this bill does is try to protect children from accidentally getting ahold of a loaded weapon and using it, unintentionally, on themselves, their siblings, their own parents,” Sen. Liz Krueger said from the Senate floor. “That’s what this bill is about. It doesn’t take a gun away from anyone.”

As we’ve reported, however, the ubiquity of this problem is frequently exaggerated by those pushing for policies that keep gun owners in check.

Opponents of the bill argue that the safe storage requirement will hamstring those hoping to use a firearm to defend their home.

“The Second Amendment is about self-defense of your person and property,” Sen. Robert Ortt said on the Senate floor. “And this bill, I think, quite clearly impedes on somebody’s ability to act in their own self-defense and use a firearm for that purpose.”

The new policy will require anyone who is a “custodian” of a rifle, shotgun, or other kind of firearm to lock it in an “appropriate safe storage depository or render it incapable of being fired by use of a gun locking device appropriate to that weapon” if the gun owner “knows, or has reason to know, that a person less than sixteen years of age is likely to gain access” to the firearm.

For those who might use quick-access safes to maintain a modicum of home-defense, the policy also prohibits firearms from being stored in the same container as ammunition.

The only provision for effective home defense with a firearm allowed by the policy would require gun owners to keep a firearm on their person at all times. The law does not require firearms to be secured if the gun is in the owner’s “immediate possession or control.”

“I think you’re going to see all these things come under pretty heavy scrutiny in the final quarter of 2019 and going into 2020. I would predict that 2020 is going to be a very active year for New York State gun control litigation and overturn,” Felano said. “Really, it’s a feel-good piece of legislation with no real means of enforcement.”

Parents who violate A02686 will be subject to a Class A misdemeanor which carries a fine of up to $1,000, three years probation and/or a year in jail.

Gun owners (non-parents or non-guardians) who have children under 16 visiting their home will face a fine of up to $250 if they are caught violating A02686.

Next post: Taurus Extending One-Year Warranty to a Lifetime Warranty