No Try, No Buy: Only A Fool Buys A Carry Gun Without Shooting It First 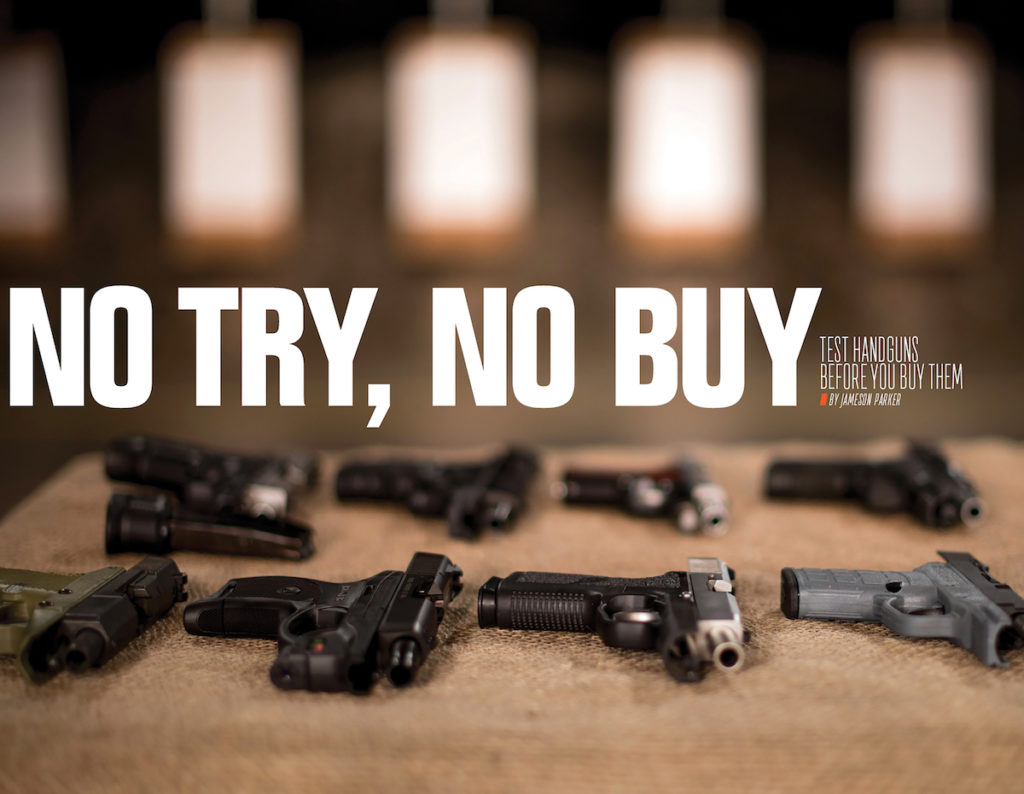 Editor’s Note: The following is a syndicated article by author Jameson Parker that first appeared in USCCA’s Concealed Carry Magazine Volume 14, Issue 6, August/September 2017 under the title, “No Try, No Buy.”

I installed a new and heavier spring in my M1911 and wanted to make sure it was working properly. I happened to mention this to a friend and he asked if he and his daughter could join me at the range because neither of them had ever fired a 1911. They are both ardent and enthusiastic hunters, intelligent and thoughtful people, so I was a little surprised when it came out that they planned to buy two handguns specifically for home defense — a 1911 for him and a .40-caliber Glock 23 for her — and that neither of them had ever fired either gun.

When I first needed a handgun specifically for concealed carry, revolvers were still standard issue for police departments across the country. A product of my times, I owned a Smith & Wesson Model 19 back then. Unfortunately, the great Model 19 was designed in part by the legendary Bill Jordan, who was built along the lines of Lebron James, and apparently it was Jordan and James whom Smith & Wesson had in mind when they designed the grips. It certainly wasn’t me, and the gun definitely wasn’t designed for concealed carry, so I bought a semi-auto.

The semi-auto I chose, on the sole basis of how it felt in my hand, was a Walther PPK in .380 ACP (the gun most strongly associated with Bond, James Bond). It fit me, was readily concealable, was reasonably accurate (in spite of primitive sights) and featured an initial double-action pull that qualified as appalling. It probably saved my life one night. I wish I still had it.

But my choice was predicated simply on how it felt in my hand, not on actual use. Back in those days, there were no gun stores in Los Angeles that would allow a customer to try a gun, and even had I been smart enough to think about trying it before buying it, I would have been out of luck. My only options back then were friends who might or might not have had a gun I wanted to try out; “trying before buying” wasn’t common practice in the early ’80s.

Today, it is very common. Of the four gun stores in the area where I live, two have large selections of “try” guns. One store has its own indoor range where customers are allowed to rent as many handguns as they wish and then shoot on their own.

The other store has a program where, for a fee, their instructor (one of the best I know) takes the prospective buyer to his or her private outdoor range with as many guns as he or she feels like trying. This was where I took my wife when she wanted to get a handgun of her own, and her experience is a good illustration of why it’s important to try before you buy.

My wife is built along the lines — and temperament — of a super flyweight. A hair over 5 feet tall, she weighs in ringside at 115 and she has hands to match her size. When she announced she wanted a handgun, I took her to all the stores in our area and encouraged her to handle everything she saw. I took her to the home of a retired Highway Patrol range instructor whose wife is an enthusiastic shooter and has a concealed carry license. I encouraged her to go to the range with me and shoot my guns.

By the time we had done all that, my bride had narrowed her parameters down considerably. There were certain guns she had no interest in even bothering to shoot and three she was very enthusiastic about, with one clear leader running ahead of the pack: the Bersa Thunder, a somewhat refined — better sights and better trigger — ripoff of my Walther PPK.

Then I sent her out with my friend the instructor. I asked that gentleman privately to throw in some additional guns that he felt, from his many years of experience, might work for a very small lady. Finally, since I am not a complete fool and I know my Bible — “A prophet is not without honor, save in his own country, and among his own kin, and in his own house” — I stayed home and let nature take its course.

What happened was not surprising. The gun my bride picked — a Glock 19 9mm — was one she had steadfastly refused to consider. The Bersa was forgotten entirely.

This is anecdotal — a single person does not equate to a group or segment of society. But it is a good example of the importance of trying guns before buying guns, as each individual is so very different in body size, body type, strength (particularly hand strength), ability, experience, needs, visual acuity and the ways in which he or she reacts to stressors like sound and recoil.

If you live in an area without access to a store that offers a chance to try before you buy — New York and San Francisco leap to mind — go to your local range or join a group that shoots regularly. You’ll be surprised by how accommodating most gun owners are.

You also might be surprised by what actually works best for you.

Previous post: Geissele Super 700 Trigger: The Best Money You Can Spend on Your 700