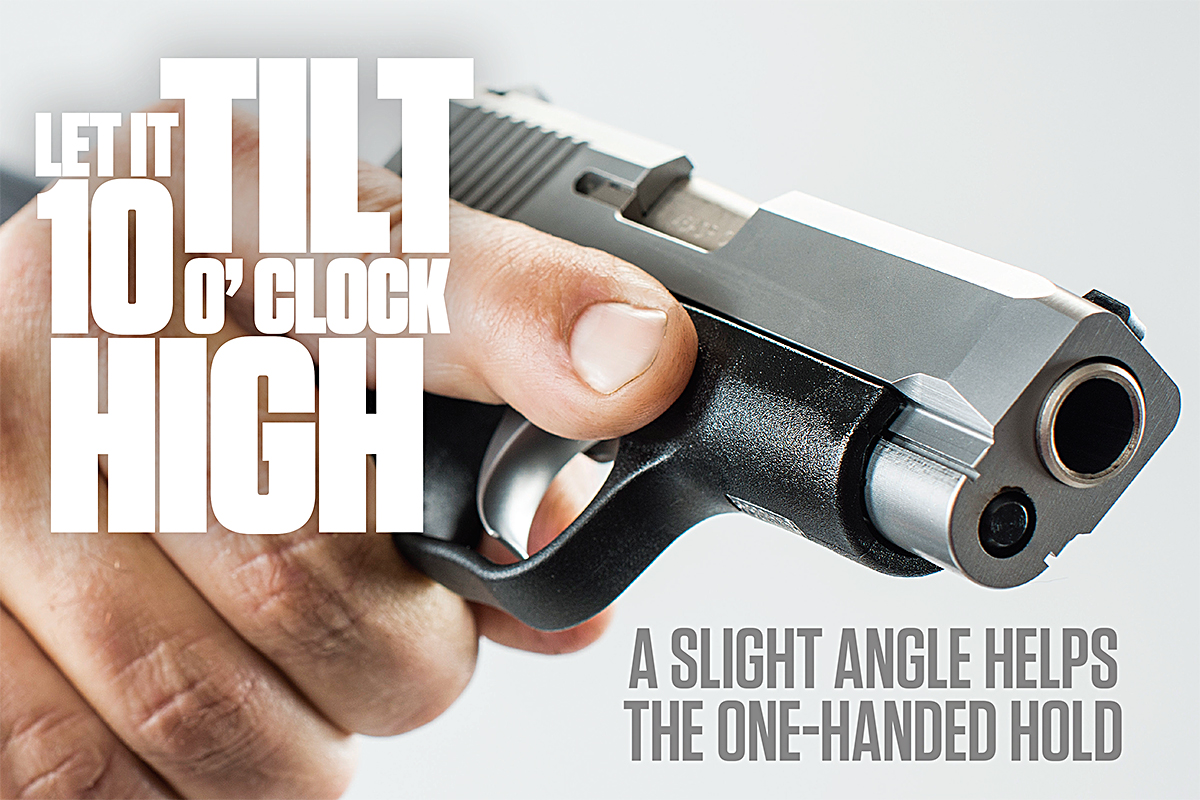 You don’t always have to hold the pistol vertically. When firing with one hand, tilting the gun slightly helps to align your muscles to create a better firing platform. This is not a different grip. It is a different hold.

There is a difference between how you grip the gun and how you hold the gun. The grip is one of the fundamental things that should hardly ever change. On a semi-auto that means the web of the hand goes high up, fingers wrap around to put as much skin in contact with the gun as possible, thumb either points forward or curls slightly, depending on what you’re comfortable with. The grip is one of the two fundamentals (the other being alignment of the eye and the gun) that I believe and teach should remain the same almost every time, almost every shot you take, no matter what else changes.

How you hold the gun, though, can change with each shot as the situation dictates. There are many variations, including—but not limited to—the level of the firearm (waist, close-contact, full extension, one or two hands, etc.), the direction the gun is pointed, and—the basis for this story—the angle at which you hold the gun when shooting one-handed. All of those can and will change, often without a thought.

What I’m going to advocate is a change in your default one-hand hold. Specifically that you stop trying to hold the gun vertically all the time when shooting one-handed. Instead, let me suggest that you allow the gun to tilt a bit to the inside. This is what Gabe Suarez calls the “half-homie” position, as it falls in between the commonly-taught vertical hold and the sideways hold often adopted by thugs and gangster wannabes. Don’t let any remote association with the bad guys get in the way of learning the benefits of this position; it goes with the body and not against it.

Now look at how your hand is set. Is it vertical? Would a line across the palm extend straight down to the floor? No? Now turn the pointing hand so that a line across the palm does go straight to the ground. Feel any tension? Now pull the hand back in and point again, this time keeping the hand vertical. Take a second or two and see how the arm feels. Now let it turn naturally to whatever angle it wants to. Feel as much tension?

Repeat this with a gun in hand if you want to. Point the gun like you point a finger. (Extending the trigger finger along the slide not only encourages trigger discipline, but helps you do this more smoothly.) You should see a tilt, somewhere between 15 and 50 degrees if you just let it happen and don’t try to align it. You may also feel additional tension when you try moving to a vertical hold from there, and a release of that tension when you let it drop back to the natural pointing position. (I say “may” because you’re now holding a weight out at the end of your arm. This may mask the addition or release of tension when the angle changes.)

NOW: WHAT IS YOUR BODY TRYING TO TELL YOU?

We know from martial arts, other physical sports, and studies of conditioning and exercise that the body generates, and resists force much more effectively if the body structure is aligned properly. In the case of firing a handgun, it’s resistance that we’re most interested in; specifically, resistance to and rapid recovery from recoil.

Because the arm and shoulder align more naturally, allowing the hand to tilt naturally will result in less felt recoil per shot, less fatigue, and more endurance during long shooting sessions. The hand and arm are more relaxed (even though under extension and holding weight) in this position. Relaxed structures are stronger and more resilient structures, and natural alignment of the hand and arm facilitates that beneficial relaxation. The relaxed, aligned structure should also allow for more rapid shot-to-shot recovery and less chance of injury to joints and the muscles, tendons and ligaments that support them.

Don’t worry about it affecting sight alignment or sight picture, either. The sights are still straight in line on the gun, and changing the angle won’t change that. It might seem a bit odd at first to see the sight picture tilted, but that should not be a long-term issue. Give yourself a little time and you will become accustomed to it.

Not only that, but the angled hold can also provide additional sighting options you may not have considered before. There are several alternative aiming methods along what Suarez International Specialist Instructor Roger Phillips calls the “sight continuum.” Most of you should be familiar with two of them: the standard sight alignment/sight picture that we all prefer to get to, and an overlay of the slide (seen from behind the gun) onto the target that is used in short-range/short-time situations. This is often called “metal on meat.” Both of those are still available with the angled hold, but a third option also presents itself. With the firearm tilted slightly you may sight along the line formed by the corner of the slide to the point on the target you want to hit. This sighting method falls between metal-on-meat and full-on sighting when you are fighting in close at high speed. It is immediately available when the hold is allowed to find its natural angle. You could, for example, if you started at close range and chose to move away, engage the target with metal-on-meat first, move to and then through the sight-along-the-corner as the range opens, and finally, if necessary, end by being completely on the sights as you continue to create distance.

Like it or not, the gun is still a physical weapon. When you take up the gun you are practicing a martial art and have become a martial arts student. Martial artists have always known that it is better to use the natural structure, strength and movement of the body. It has always been more efficient and effective, and increased the chances of winning the fight, to go with the body rather than against it. When seeking to project and control force, using the body’s structure and natural strengths in a controlled and intelligent manner will surely increase your ability to see the fight ended quickly and reduce the chance of loss to yourself and to your loved ones.

Take some time to look at all the angles. You may find that you will shoot easier and straighter if you opt for a little angle in your one-handed shooting hold.

CR Williams: is a former Suarez International Staff Instructor and author of the Gunfighting, and Other Thoughts about Doing Violence series of books. To find out more about the books and access additional material or to ask questions or make comments or requests, contact him through his website at www.inshadowinlight.com.

Next post: State Firearms Registry Being Considered in Pennsylvania