The PIAT Gun That Saved the World: “It Was Rubbish, Really.” 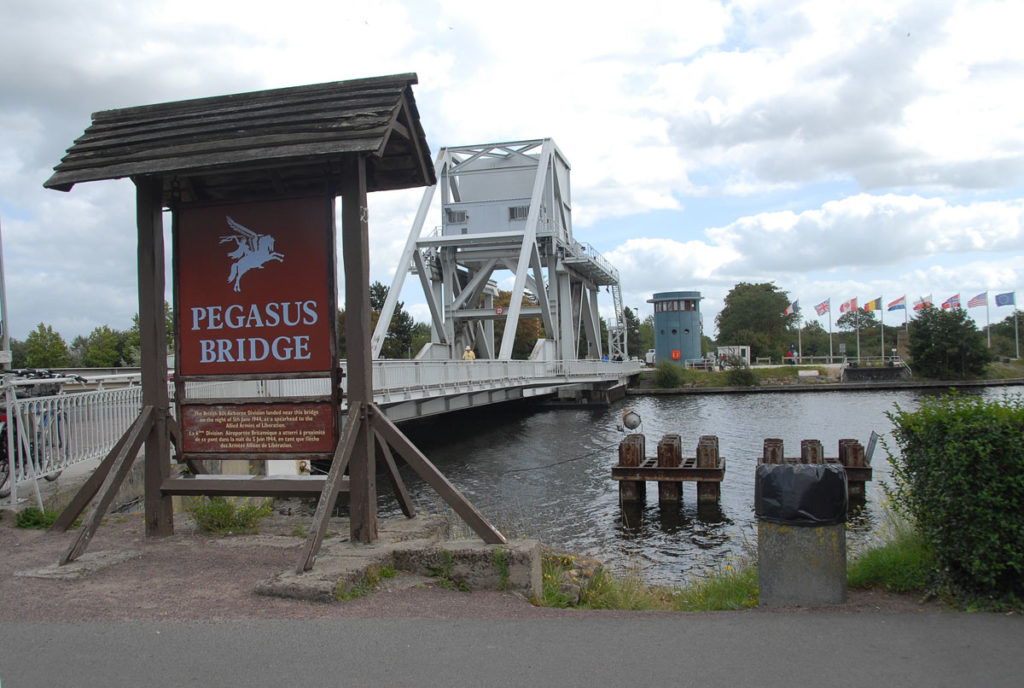 At 0200 on June 6, 1944, Sergeant Charles “Wagger” Thornton lay concealed underneath a pile of debris panting in the darkness. He was deployed alongside a building on a tight little French street that defined the approaches to the bridges over the Orne River and the Caen Canal. He had been in place only three minutes when the first German tank rumbled slowly into view by the light of nearby flames. 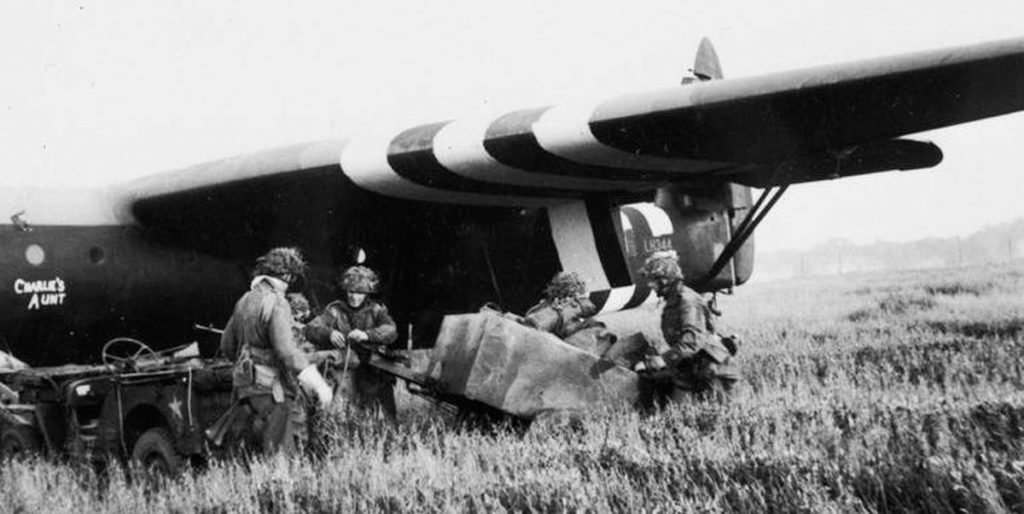 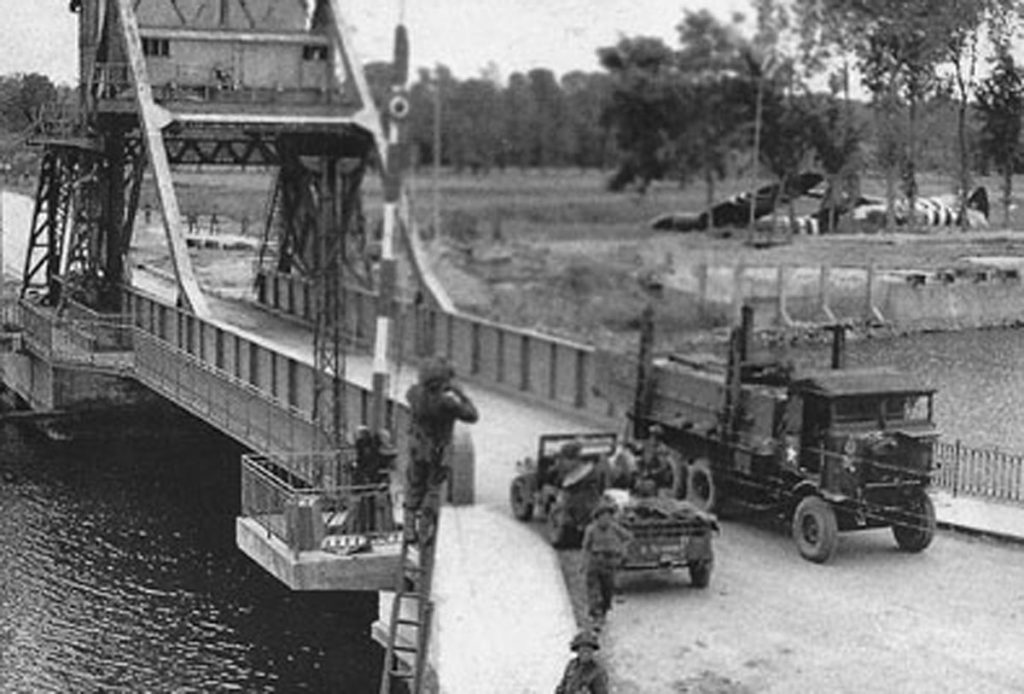 The seizure of the twin bridges over the Orne River and Caen Canal by D Company of the 2d Airborne Battalion, Oxfordshire and Buckinghamshire Light Infantry effectively sealed off the invasion beaches from reinforcement by the German 21st Panzer Division. The success of this critical mission came down to a single shot from a PIAT gun.

This particular vehicle was likely a Panzerkampfwagen Mk IV. The Pzkfw Mk IV had spearheaded Blitzkrieg and pierced the heart of Russia. This particular tank was assigned to the 21st Panzer Division and was the vanguard of an armored element that intended to be waiting on the Normandy beaches to repel the Allied invasion slated to begin in four short hours. The only thing standing between these German tanks and unimaginable bloody carnage on the beaches was Wagger Thornton and his PIAT gun.

PIAT stood for Projector, Infantry, Anti-Tank, and Thornton did not hold the weapon in particularly high regard. The PIAT was technically a spigot mortar that was sinfully heavy, cumbersome, difficult to operate under pressure, and relatively inaccurate. In post-war interviews, Thornton described the gun saying, “It was rubbish, really.” Now Thornton quivered in the darkness with his company’s last operational PIAT gun and his final two rounds of ammunition standing by to decide the fate of the Free World.

The village streets were narrow and would only permit one tank at a time to proceed. For reasons lost to history the 21st Panzer vehicles had outpaced their Infantry support so they approached the bridge essentially blind. When the lead Panzer came abreast of his position Thornton aligned his PIAT by the dim light and squeezed the gun’s massive trigger. 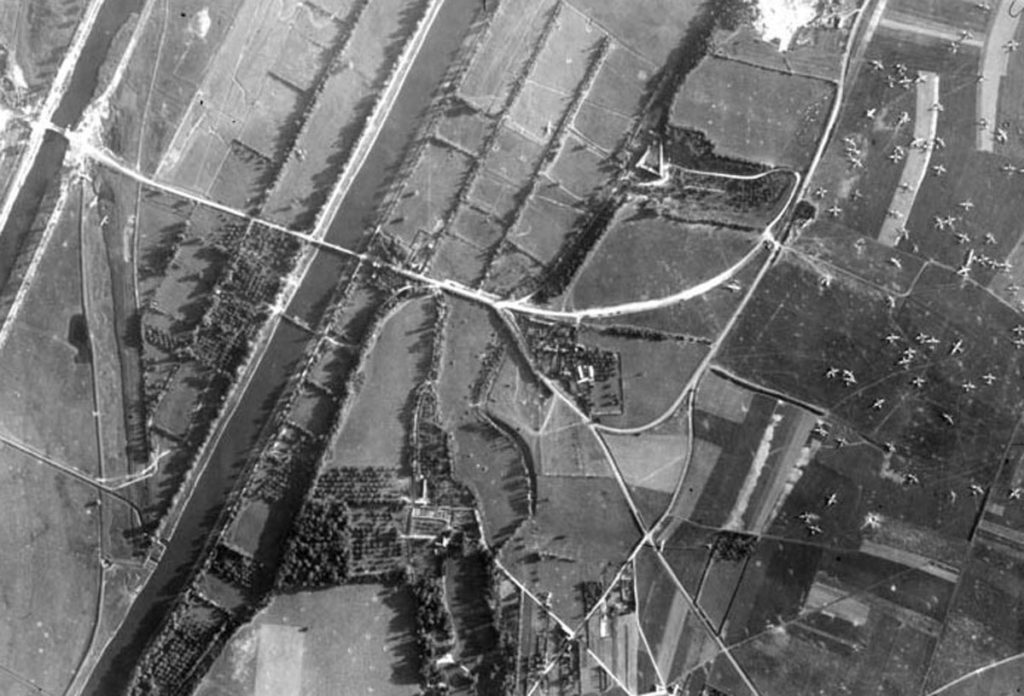 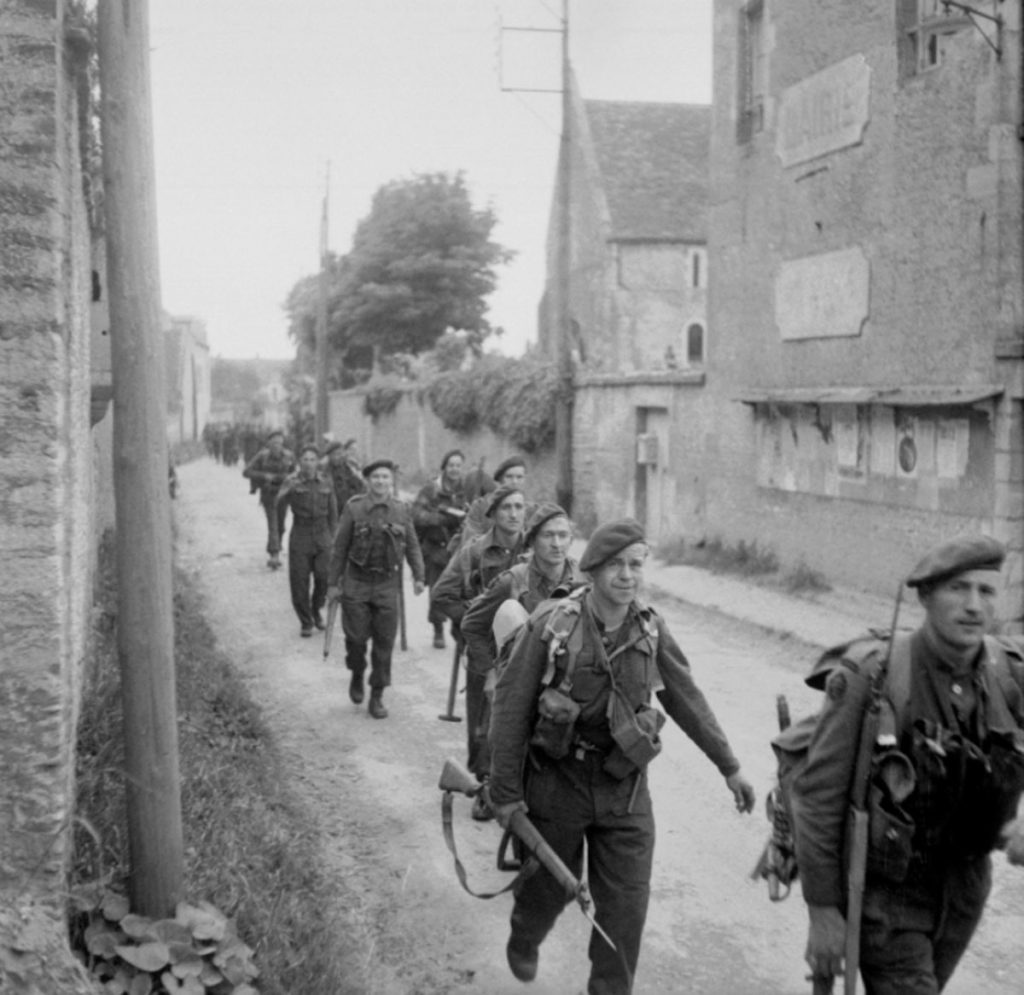 The PIAT’s recoil was legendary, but Thornton hardly noticed. The heavy PIAT bomb arced the thirty meters to the tank and struck it squarely amidships, detonating with profound ferocity in the tight confines of the village. The bomb’s shaped-charge warhead burned through the German steel and sleeted the interior of the tank with molten metal, setting fire to onboard ammunition and fuel.

All but one of the German tank crewmen died in place. The surviving soldier, inexplicably the Company Commander of the 1st Panzer Engineering Company, lost both legs but survived the initial conflagration. He died some hours later in a British aid station.

The disabled German tank burned out wedged in the one precise spot that denied access to the bridge for the dozens of tooled-up armored combat vehicles following behind. With buildings on either side of the hulk, the Germans were forced to retreat and search for another route over the twin waterways. By the time they could have reached the beaches the Allies had formed a lodgment and began pouring men and material onto the continent.

The D-Day invasion was an iffy thing. The Supreme Allied Commander General Dwight Eisenhower had drafted a letter in advance accepting full personal responsibility for the failure of the landings in the event Allied forces had been unable to crack Hitler’s Festung Europa. Thanks to Wagger Thornton and the grit and sacrifice of thousands of Allied troops Eisenhower’s letter was never issued.

The Projector, Infantry, Anti-Tank was a monstrous beast of a gun. Weighing in at more than thirty pounds, this ungainly spigot mortar was nonetheless effective at cutting through enemy armor at close ranges. 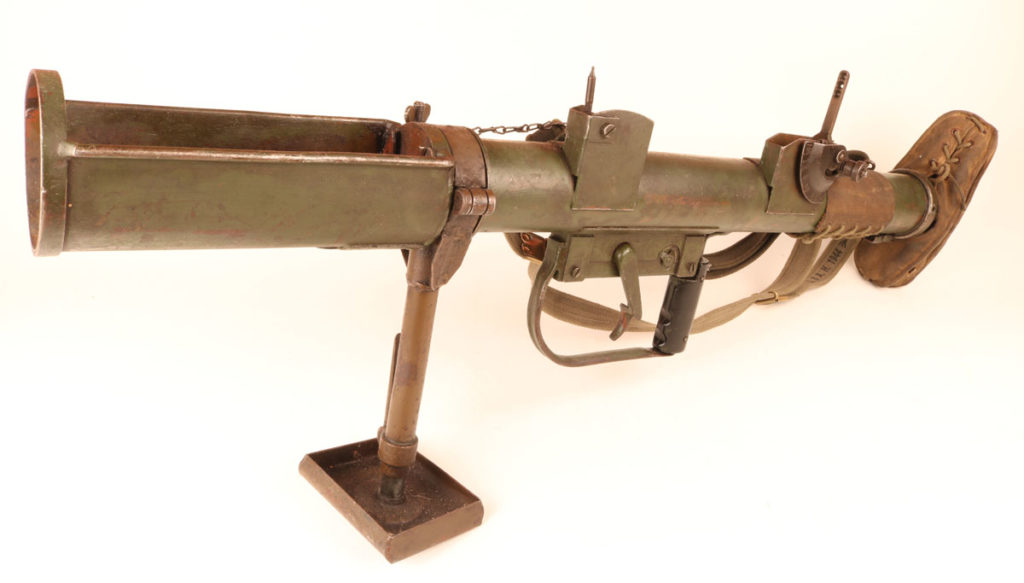 The PIAT was a monstrous thing. At 39 inches long and 34 pounds, the PIAT used a powerful spring to launch its 2.2-pound projectile assisted by a propellant charge in the base of the round. The maximum effective range of the gun against point targets like tanks was listed as 115 yards while it was technically effective against area targets such as buildings out to 350 yards. Tommies who used the gun in combat claimed it was only truly effective out to about fifty yards. Fifty yards is awfully close when the target is a German tank bristling with cannon and machine guns. 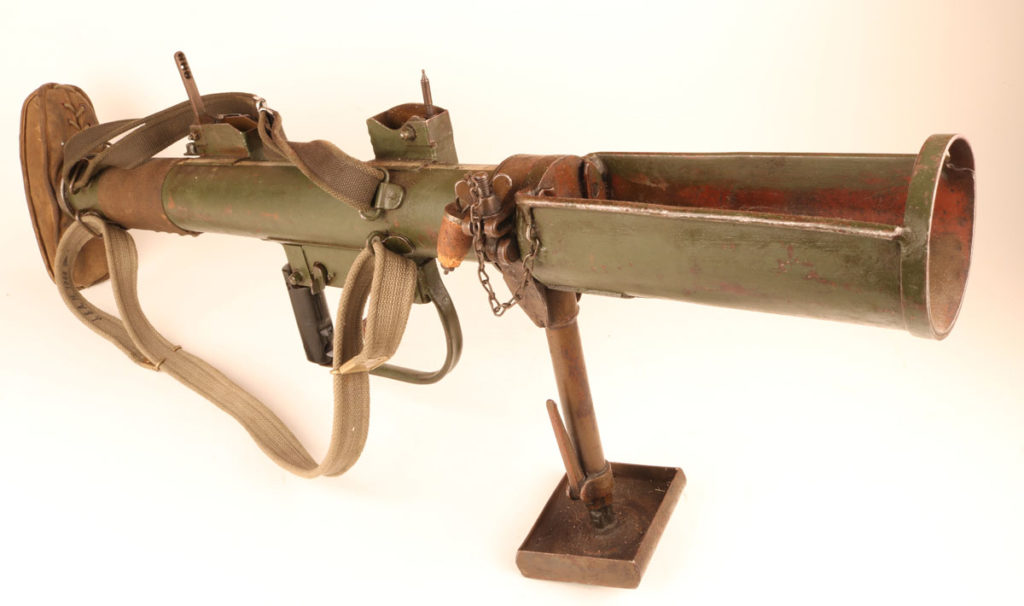 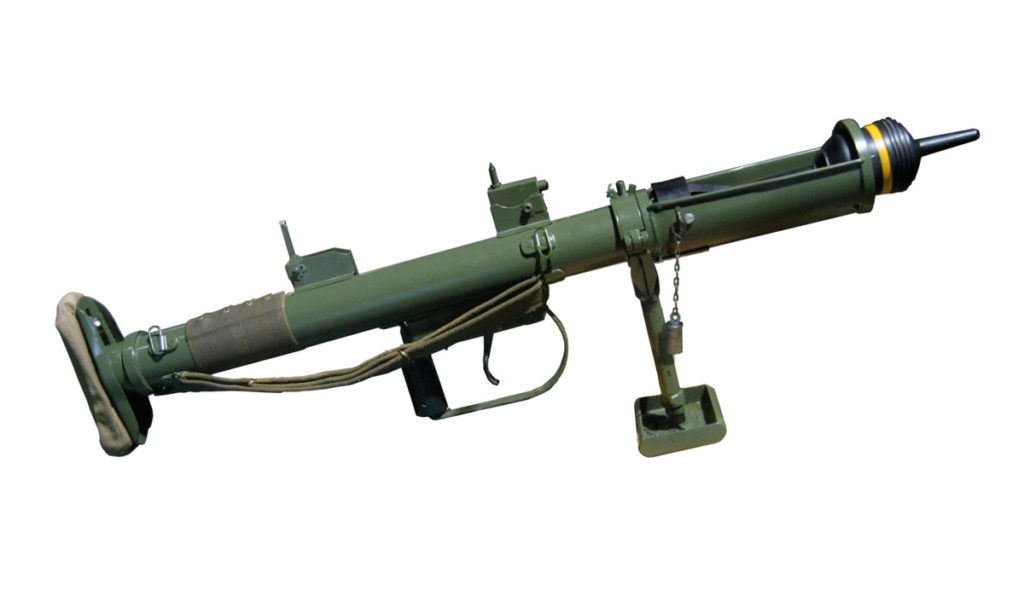 The PIAT gun featured canvas covers over the tube as well as the buttplate in a doomed attempt at softening the gun’s gruesome recoil. The sights folded when not in use and incorporated a spirit level that would have been nothing more than ballast after dark. The gun included a forward trough of sorts to hold the bomb, and the trigger was grossly oversized. There were sling attachment points to accept two standard British rifle slings in a futile effort at making the gun more portable. 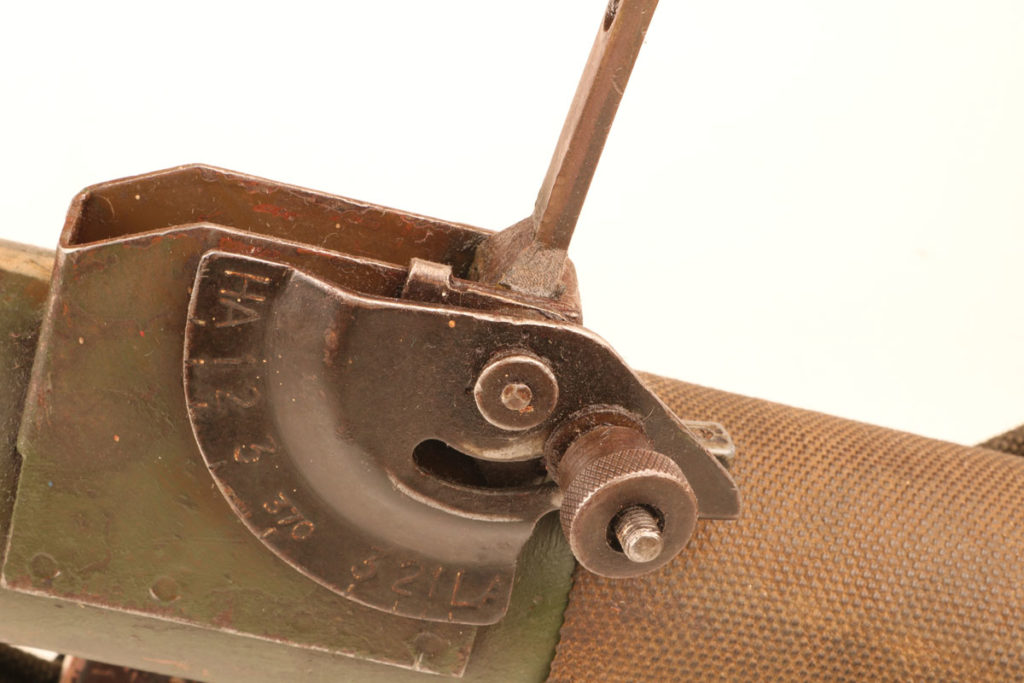 The sights are ridiculously complicated and even incorporate a fluid-filled spirit level that would have been useless after dark. 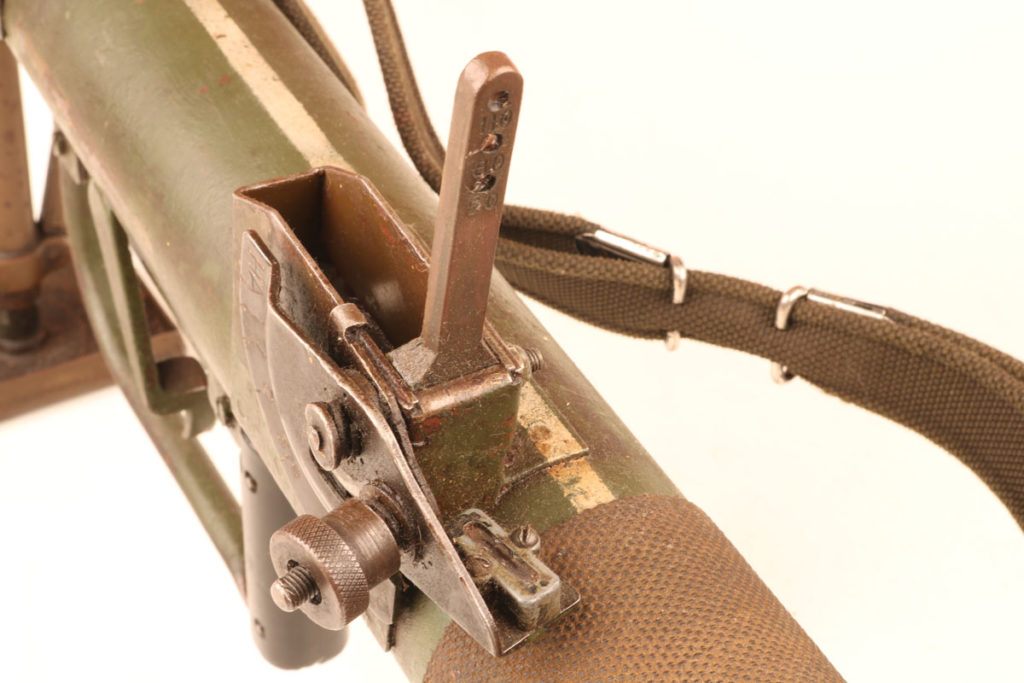 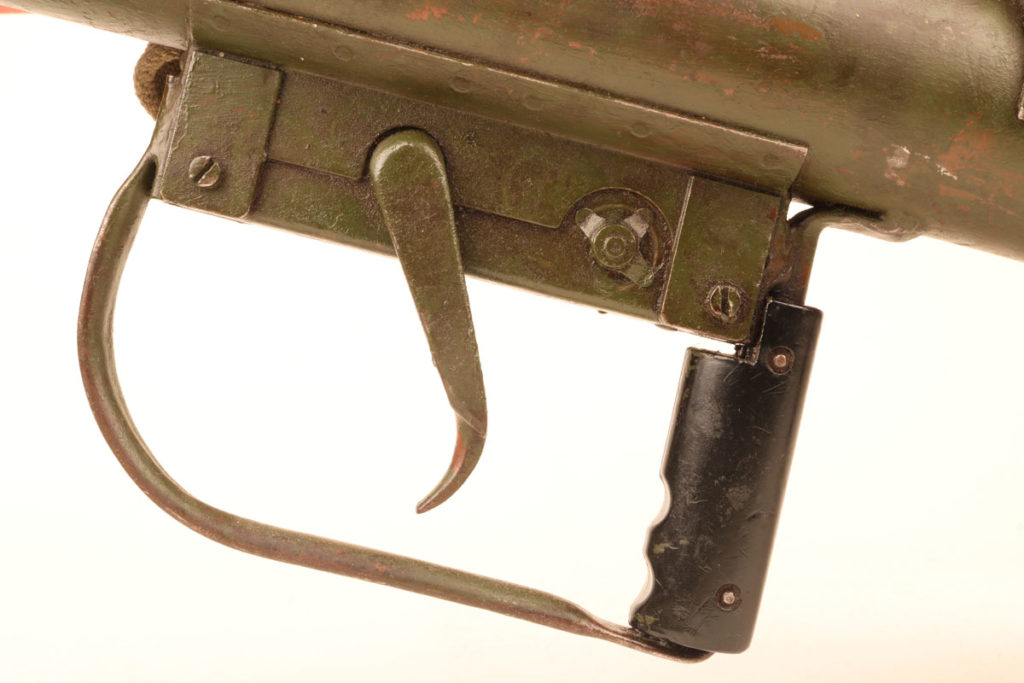 The trigger on the PIAT is grossly oversized. 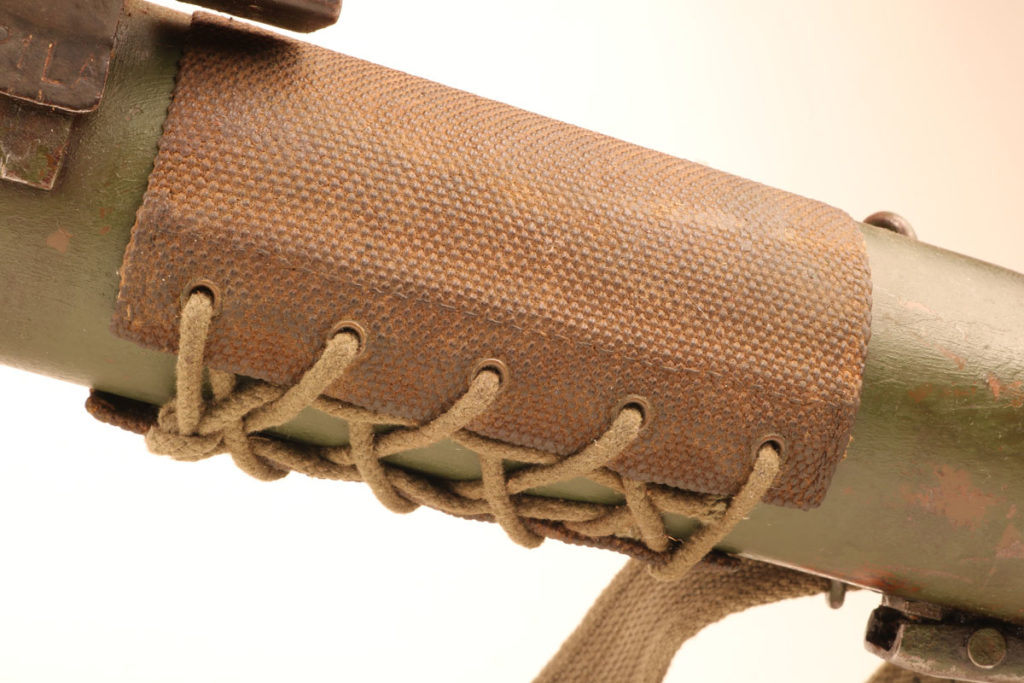 The PIAT comes with canvas covers over the buttplate and body of the gun. 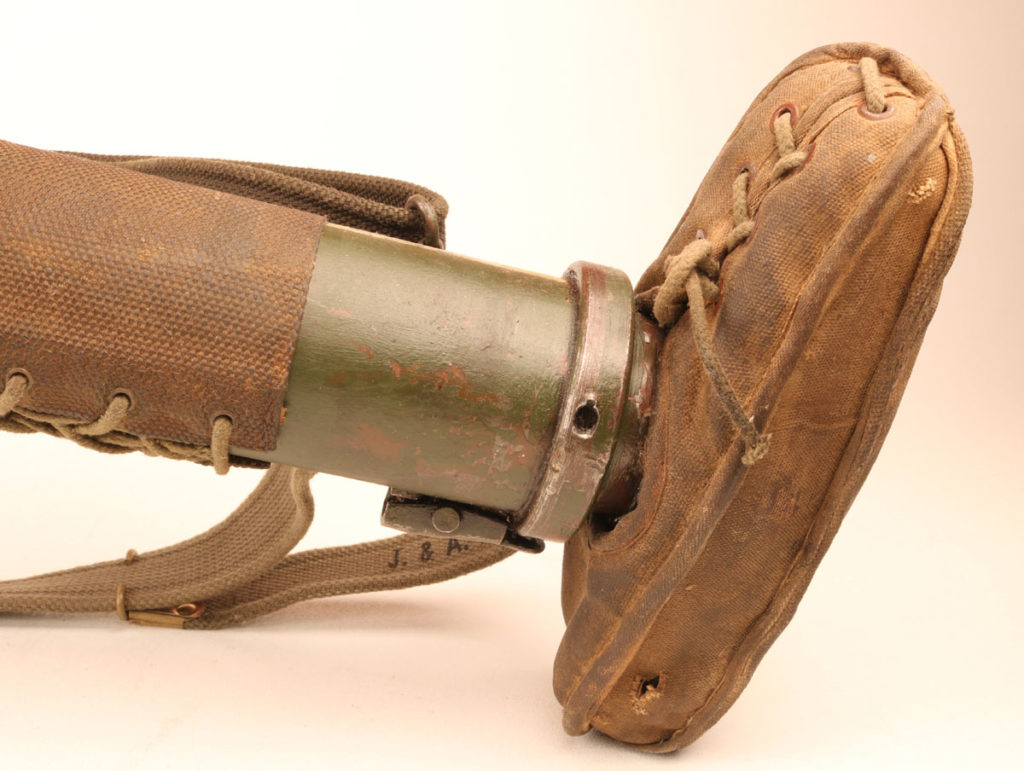 The PIAT accepted a pair of standard canvas rifle slings to ease portage. It was nonetheless a holy terror to carry. 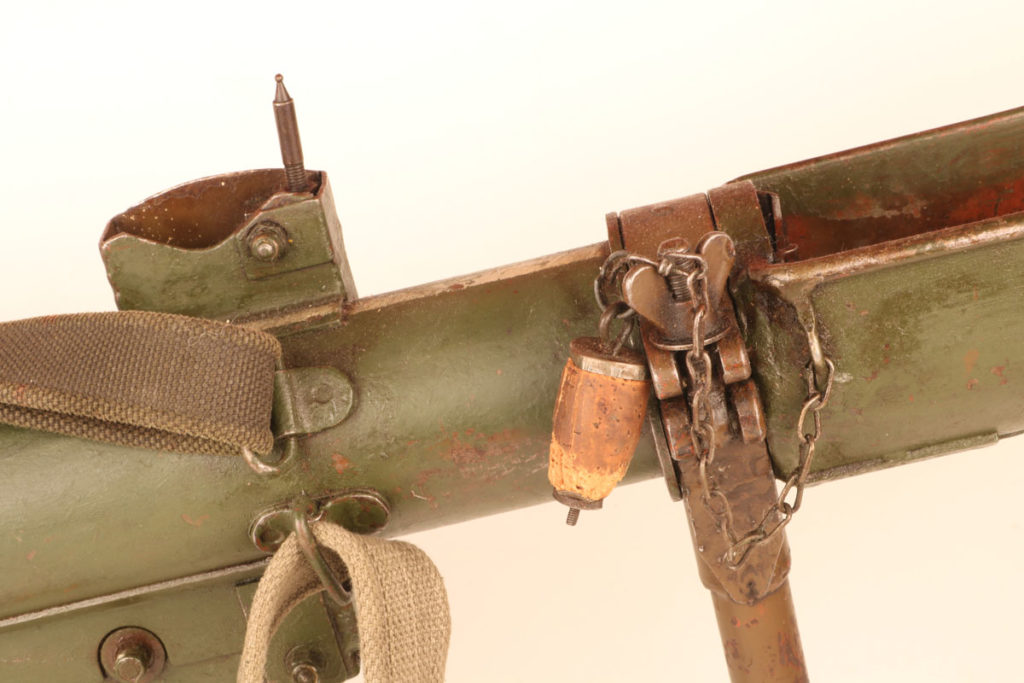 A large cork on a chain occludes the hole in the front when the gun is cocked. 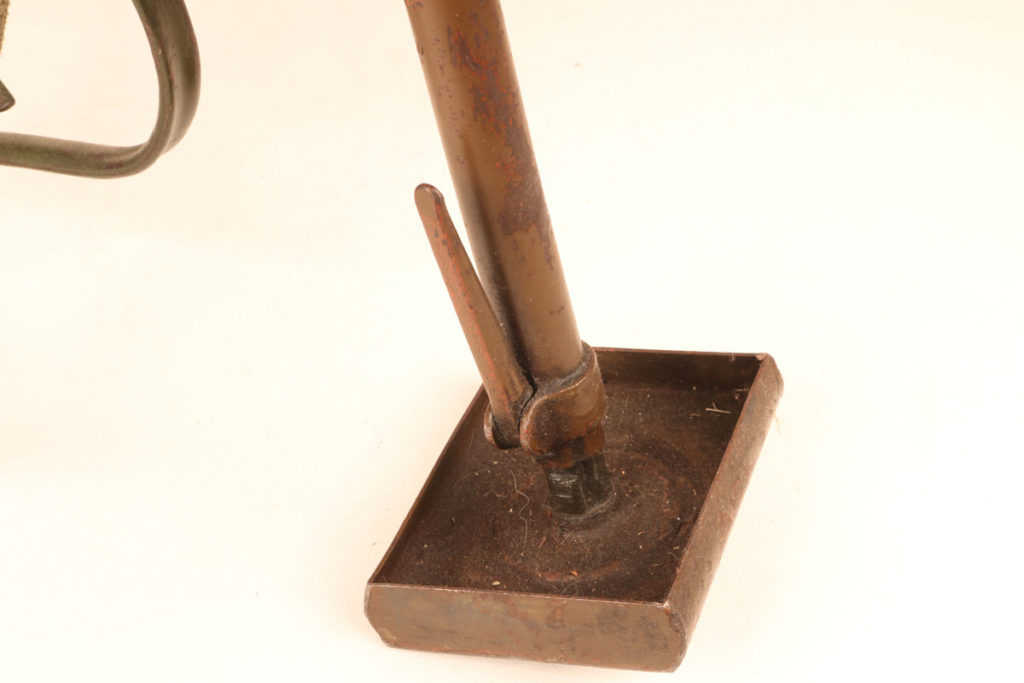 The PIAT has a built-in adjustable monopod.

The PIAT sported no telltale muzzle flash but was notoriously difficult to cock. Firing the weapon would theoretically recock the action automatically. However, cocking the gun manually involved standing on the buttplate and securing the firing grip with your hands. The operator then extended his legs, using the thigh muscles to compress the massive firing spring. As one might imagine, this was tough to do under fire. PIAT rounds boasted 4 inches of armor penetration though about one in four rounds fired in combat failed to detonate. 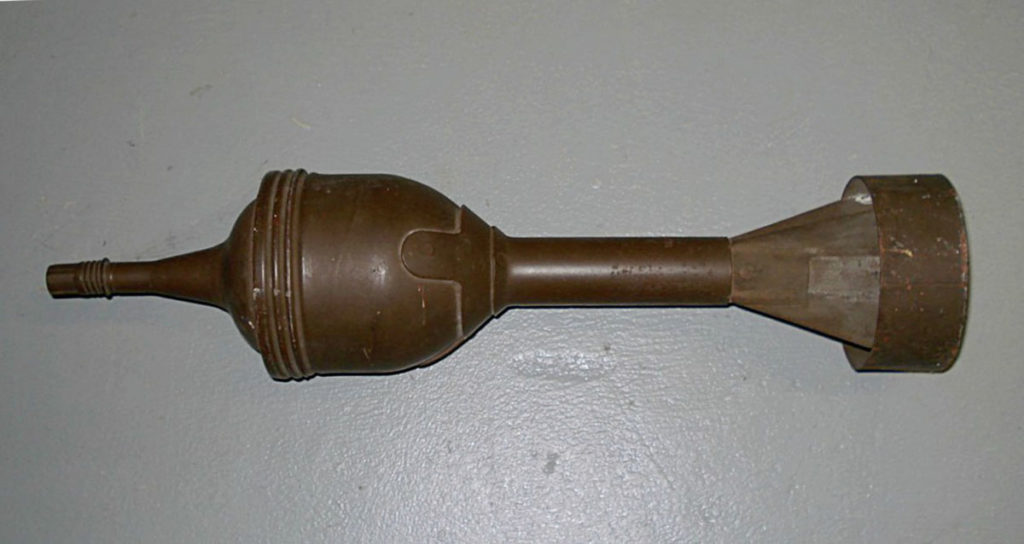 The PIAT bomb sports a shaped charge warhead that will burn through 4 inches of steel. One in four rounds failed to detonate in combat.

The PIAT was designed as a replacement for the Boys Anti-Tank Rifle. The Boys was a .55-caliber high-velocity beast of a bolt-action rifle that fired hardened armor-piercing shot. By early in the war, it became apparent that the Boys was hopelessly outclassed by advances in German armor. The key to the success of the PIAT was the advent of the shaped charge warhead.

The first effective shaped-charge anti-armor warheads arose during World War I. It was a one Charles Munroe working in 1888 who first imagined the military applications of shaped charges. The eponymous Munroe effect was first observed when a mining charge with the manufacturer’s name stamped into it was detonated alongside a piece of steel and subsequently imprinted an image of the words into the nearby metal.

In its simplest form, the shaped charge warhead incorporates a cone-shaped explosive charge oriented with its tip facing away from the target. If detonated at an appropriate standoff distance such a charge acts like an explosive lens, focusing a shockwave forward onto a single point. If the warhead is properly designed and this wave impacts armor plate at its point of tightest focus, the resulting charge will cut through extraordinary amounts of steel. While this effect is commonly attributed to a jet of hot gas, the effect is actually entirely kinetic in nature. The shaped-charged bomb thrown by the PIAT weighed but a single kilogram yet was capable of slicing through the side armor of a German Mk IV tank with relative ease. 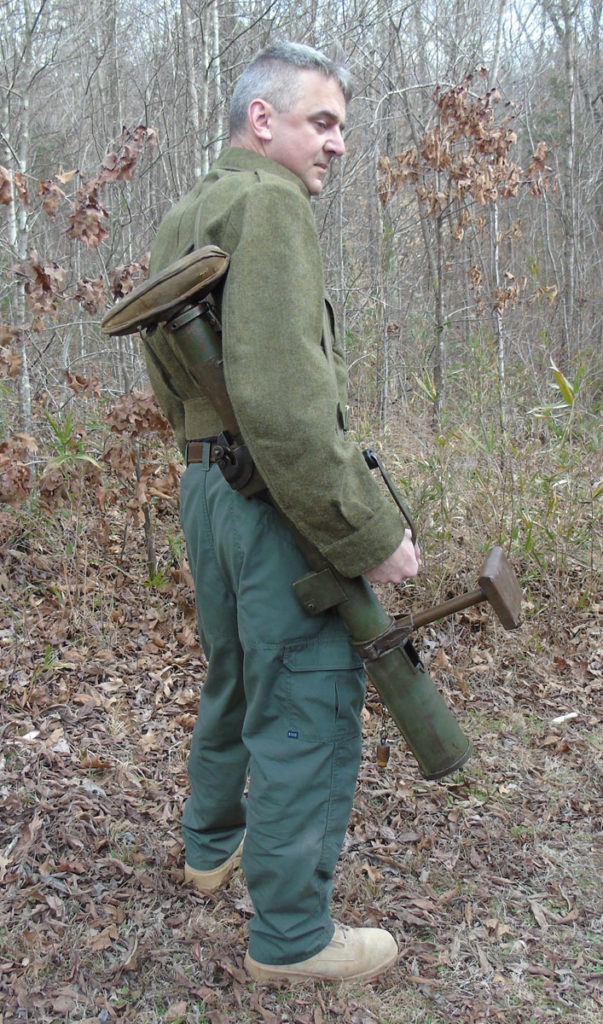 There is no comfortable way to carry a PIAT gun. 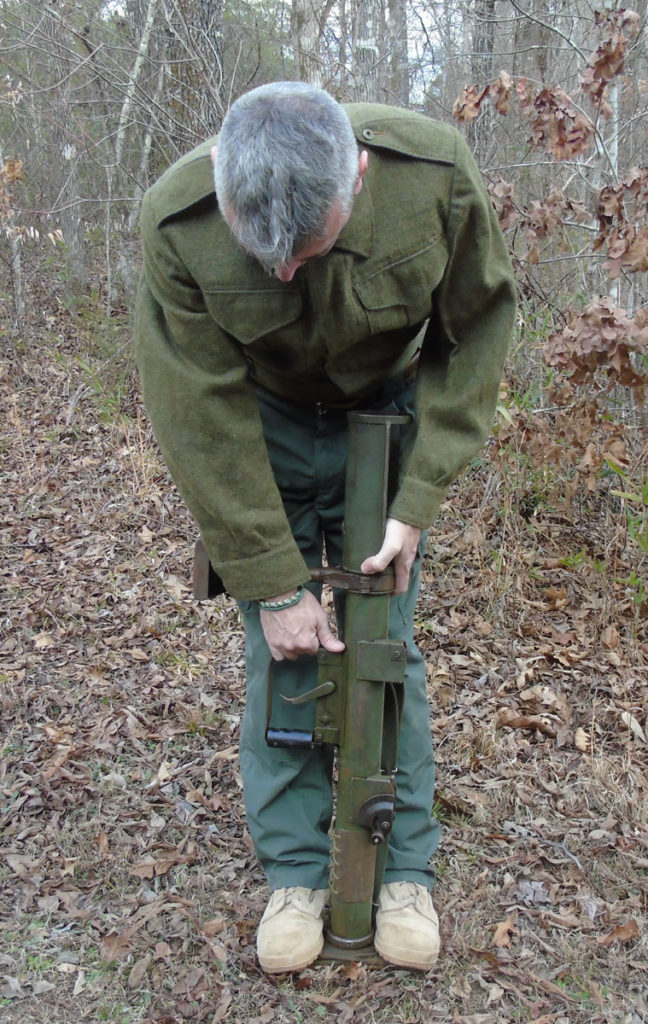 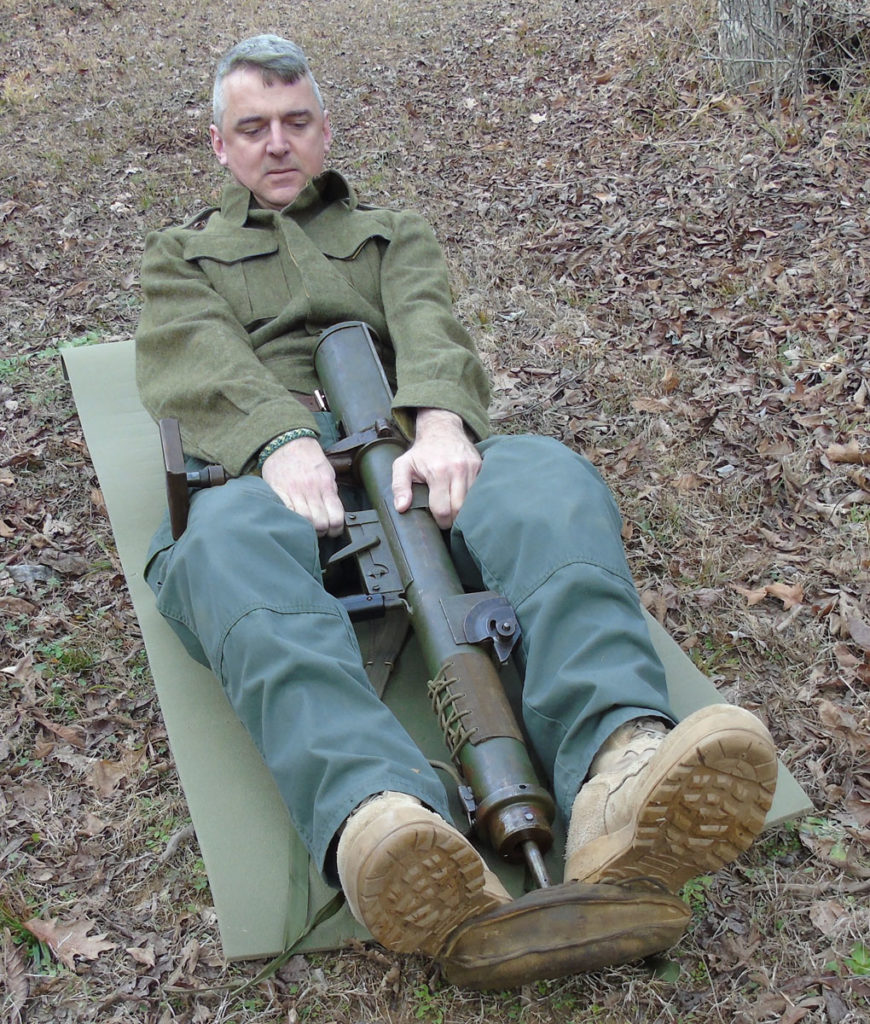 The PIAT recocks itself with each round fired. However, cocking the gun that first time is a laborious undertaking. Doing so under fire would be unimaginably frustrating. 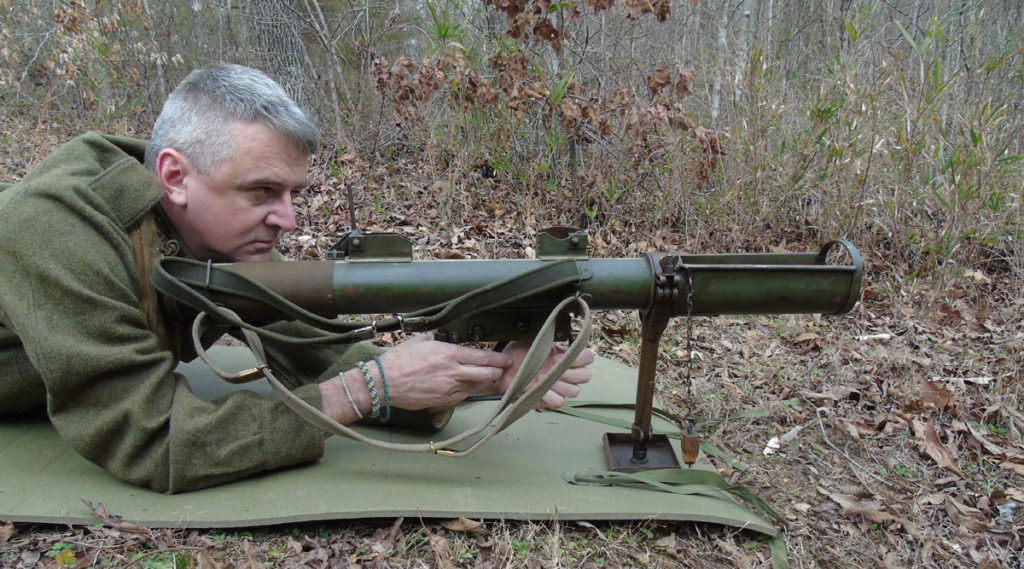 Once in action, the PIAT was effective at modest ranges. 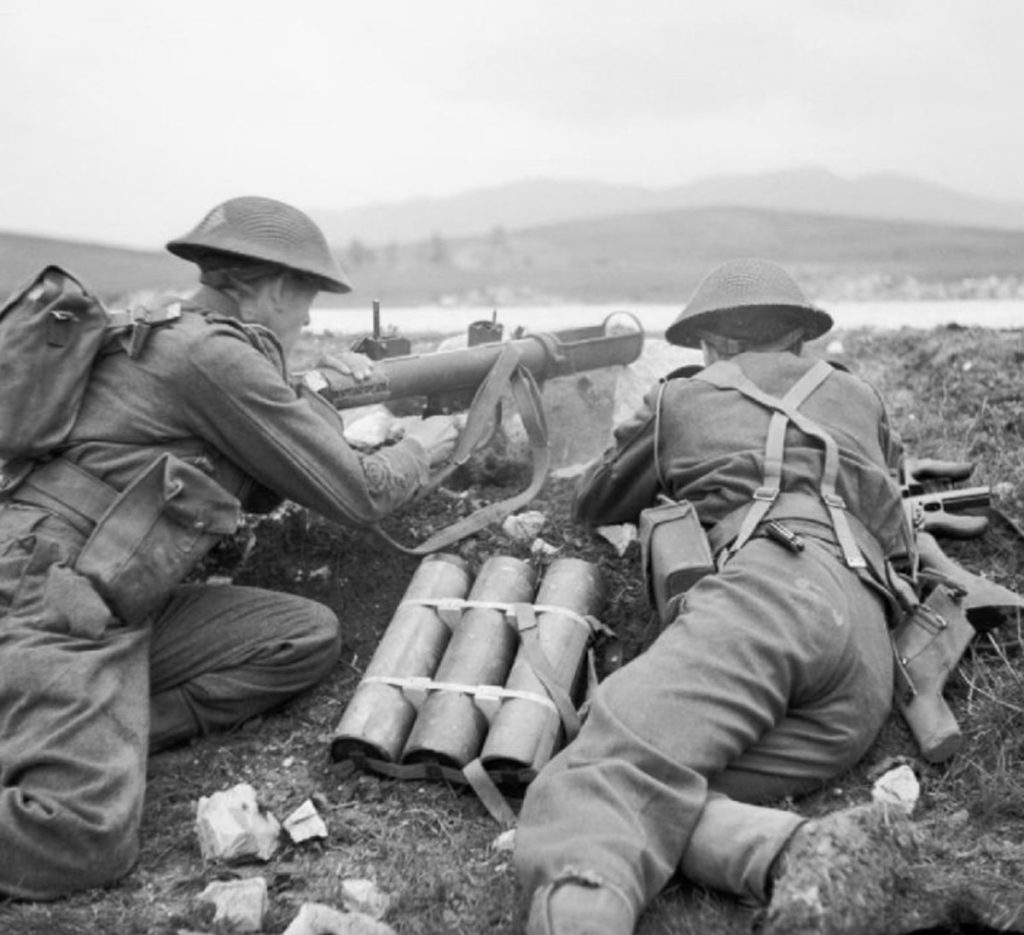 The PIAT saw service throughout the British Armed Forces in the latter parts of World War II. 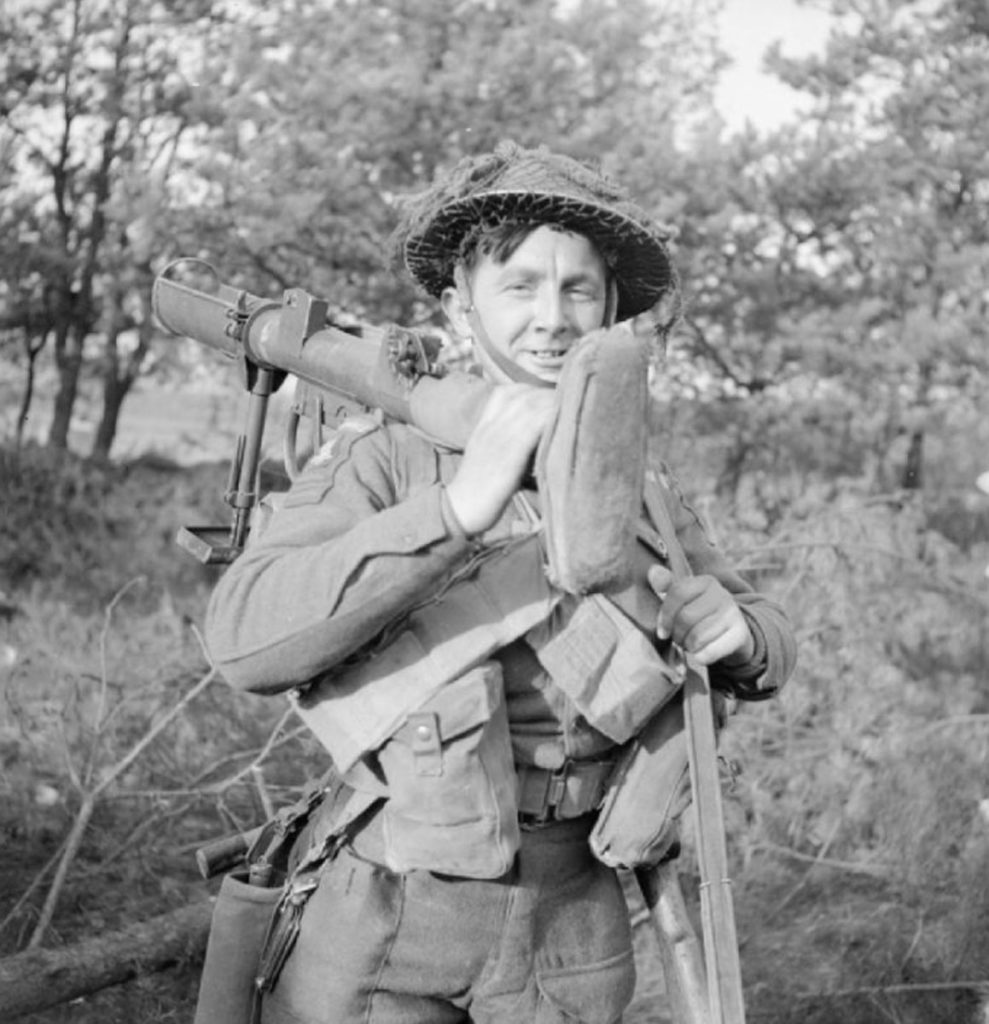 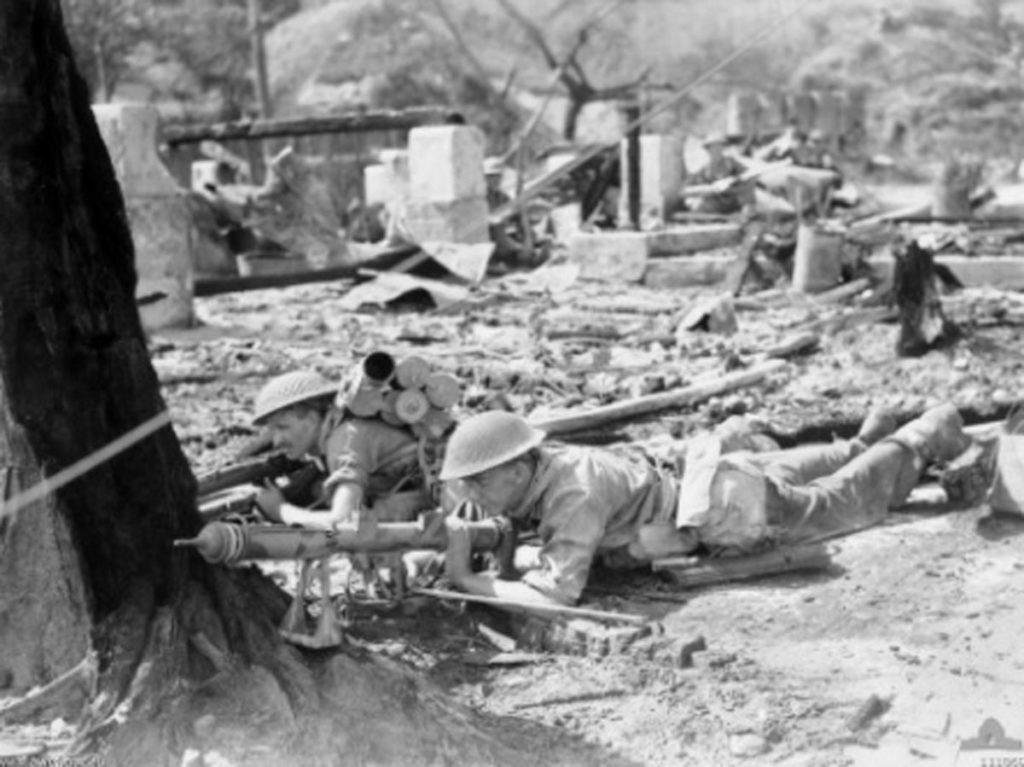 Operation Deadstick launched at 0016 on the morning of D-Day and represented the first offensive Allied action of the invasion. This critical operation involved members of D Company of the 2d Airborne Battalion, Oxfordshire and Buckinghamshire Light Infantry, itself part of the British 6th Airborne Division. The D-Company mission was to land via glider for a surprise coup de main to seize two strategic bridges and prevent German armored forces from reinforcing the beach defenses. Failure would allow the German armored reserve access to the beaches as well as cut off the rest of the British 6th Airborne that would otherwise be trapped on the enemy side of these two waterways.

28,000 troops entered combat successfully via glider and parachute on June 6, 1944. The American 82d and 101st Airborne divisions had the missions to secure the causeways and rear areas surrounding the American invasion beaches. The British had responsibility for seizing the bridges over the Orne River and the Caen Canal, itself some 800 meters to the West and running parallel to the river, as well as the destruction of the Merville gun battery with its commanding view of the invasion beaches.

Six Airspeed Horsa gliders, each carrying two pilots and 28 fully armed assault troops, landed this modest force under cover of darkness. The British assault package commanded by Major John Howard ended up on target at the perfect time and perfect location to seize these two strategic bridges. In what has been described as the most extraordinary feat of pilotage of the war, these Horsa pilots in pitch darkness dropped their gliders at the precise spot required for Major Howard’s men to take the bridges. 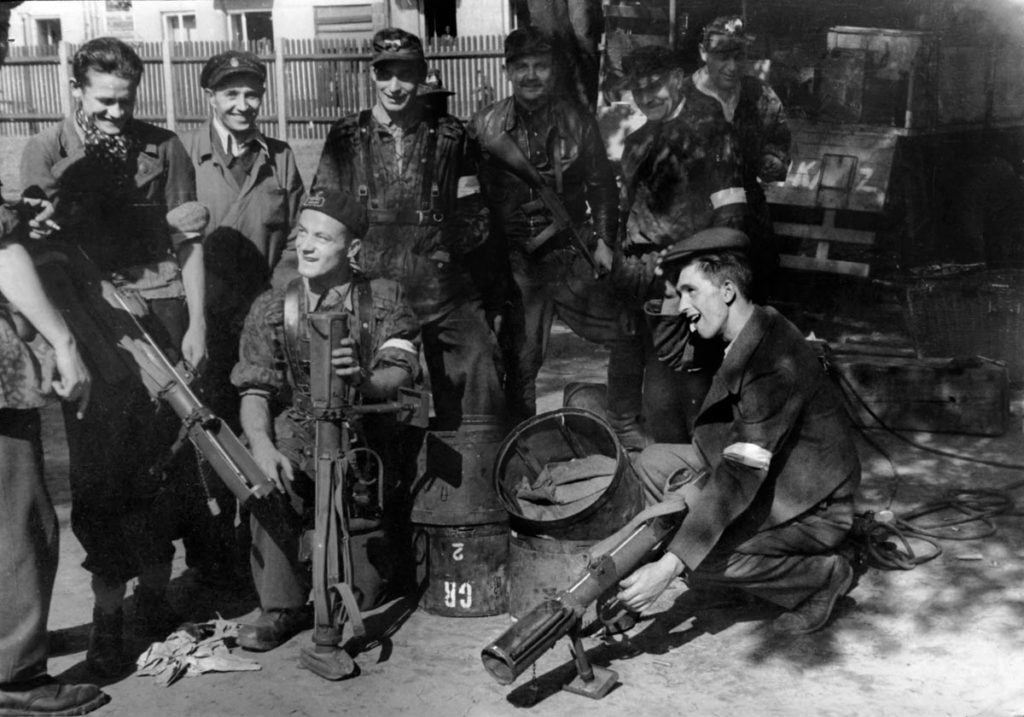 Here we see PIAT guns in the hands of Polish partisans during the siege of Warsaw.

Allied troops landing on the Normandy beaches faced organized defenses arrayed in depth that featured armored gun emplacements and ample supporting artillery. Had they been met on the beaches by the 21st Panzer fully fueled, armed, and ready for a fight the outcome might very well have turned out differently. It is thought-provoking to ponder that the entire D-Day invasion and subsequent liberation of Europe really did come down to a single shot from a PIAT gun wielded by a shivering British Airborne soldier that dark morning in France.