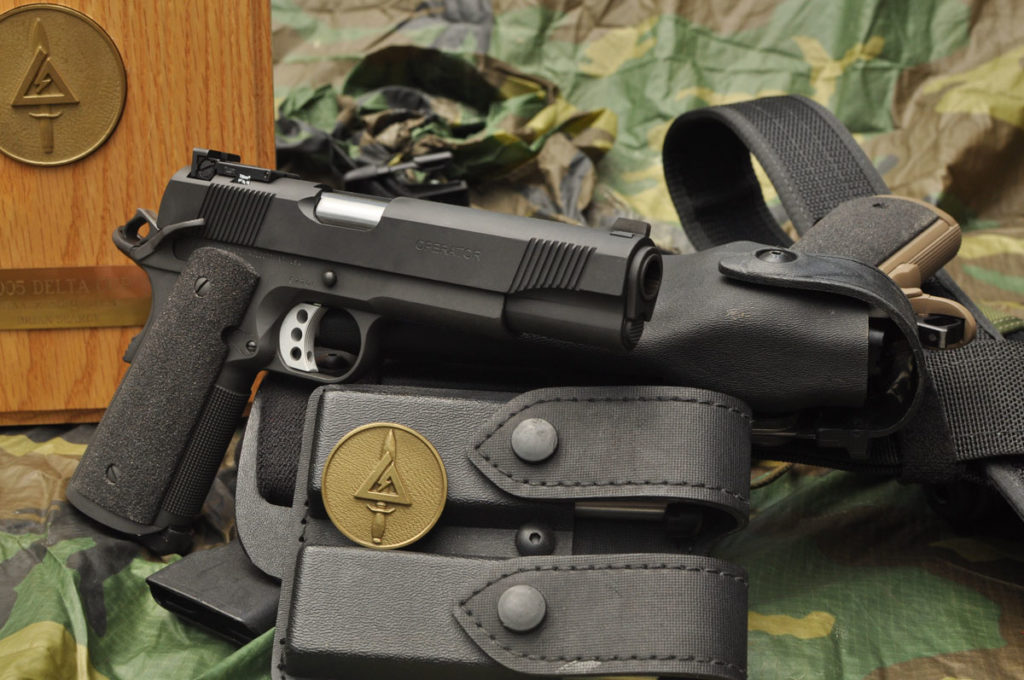 Brian Searcy served 16 years in Delta during which time his primary pistol was the 1911. The Operator 1911 is his version of the last single stack 1911 carried by Delta.

The Colt 1911’s service to the United States’ military is legendary. In the hands of American soldiers, it has saved lives, and taken lives, across the globe. While the U.S. Army transitioned to the Beretta 92 in 1985, many units selected to hang on to their 1911s. 1st Special Forces Operational Detachment-Delta, also known as Delta Force, was perhaps the last unit in the Army to carry the 1911. In several books about Delta, authors have written about using the 1911 and how many rounds were put through their pistols weekly. In almost every description of Col. Charles Beckwith, Delta’s first commander, there is mention of his 1911 that he perpetually carried. Perhaps the most heroic use of the 1911, in recent years, was the Battle of the Black Sea, also known as Black Hawk Down. Delta operators, MSG Gary Gordon and SFC Randy Shughart, were inserted to the second crash site to provide security. As most know, the site was overrun and both operators were killed. However, their actions helped save the life of 160th SOAR pilot, Michael Durant. Both Gordon and Shughart were posthumously awarded the Medal of Honor. 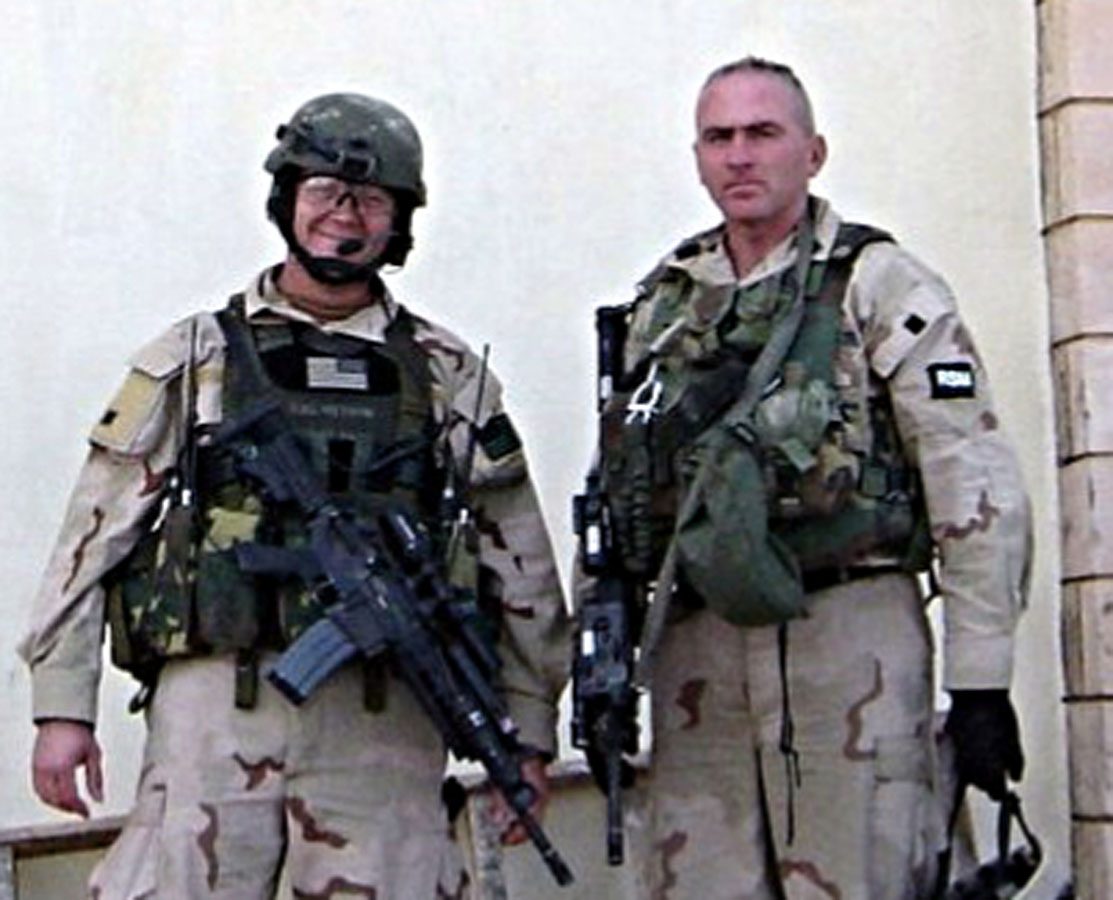 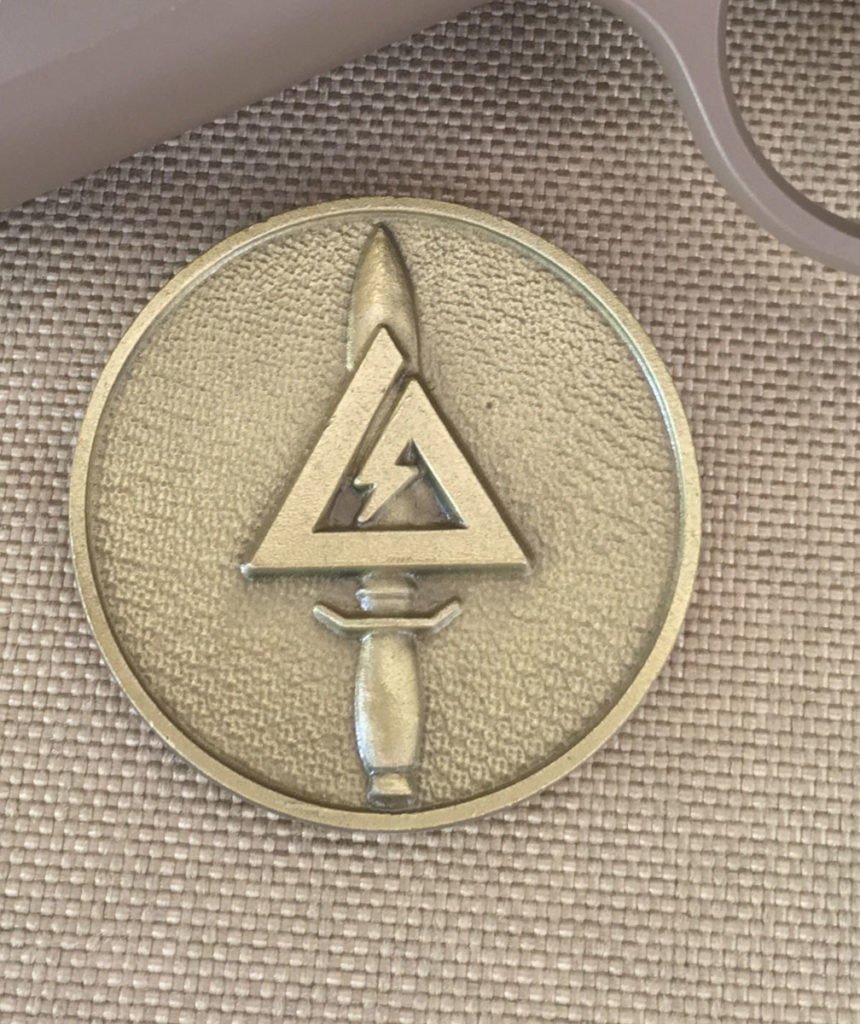 Brian forwarded one of his personal challenge coins to the author for photography.

Brian Searcy spent 16 years in Delta, passing selection in 1991. When Brain arrived at Delta, the Unit used match grade 1911s that were built by “civilian technicians” that were then tweaked by Unit armorers.  Because of the unique mission of Delta—hostage rescue, counter-terrorism, and aircraft assault/recover, the guns had to be 100% reliable. There were many low-profile missions, such as protective security details and surveillance where the 1911 was not only the operator’s primary weapon—it was their only weapon. 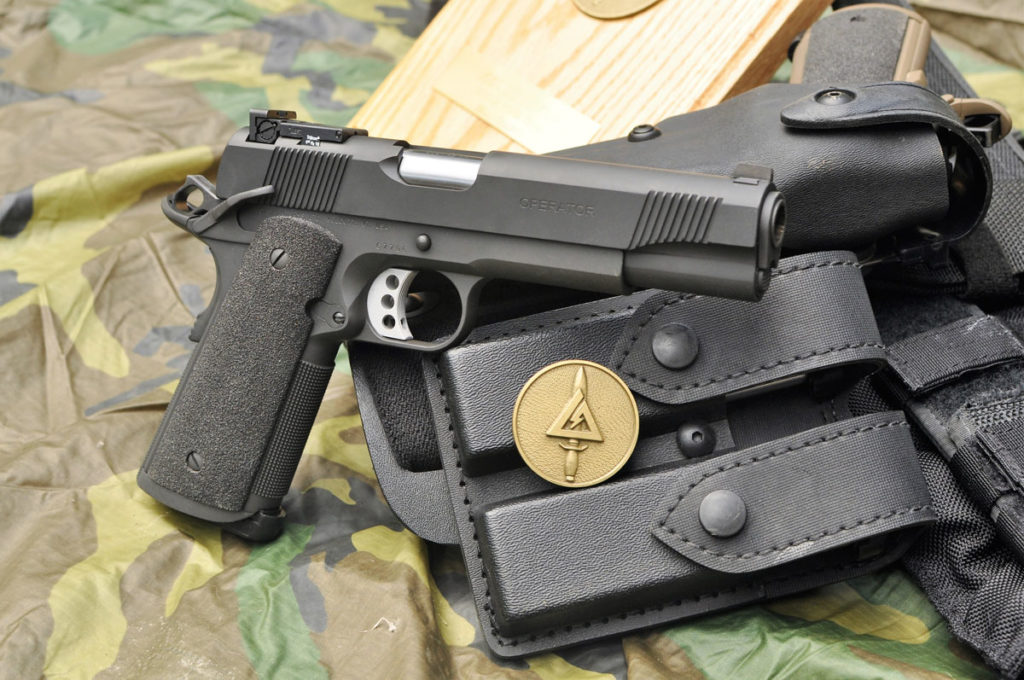 Brian Searcy spent 16 years in 1st SFOD-Delta. His Operator 1911 represents is his version of the pistol he carried while assigned to the Unit.

In talking to Brian, I learned that the guns were pretty simple. Upon arriving at the Unit, Brian said the guns were generally set up with fixed Novak sights. Interestingly, some operators found that, in low light, Tritium sights were distracting and could obscure the target. Both standard and ambi thumb safeties were available, depending on the preference of the operator. Upon being assigned to Delta, each operator was issued two 1911s. Normally, the 1911 was considered a secondary weapon but, when used as the primary assault weapon, most operators carried both. An example of this type of operation is an aircraft or bus assault. According to Brian, “The 1911 was revered by the guys.” 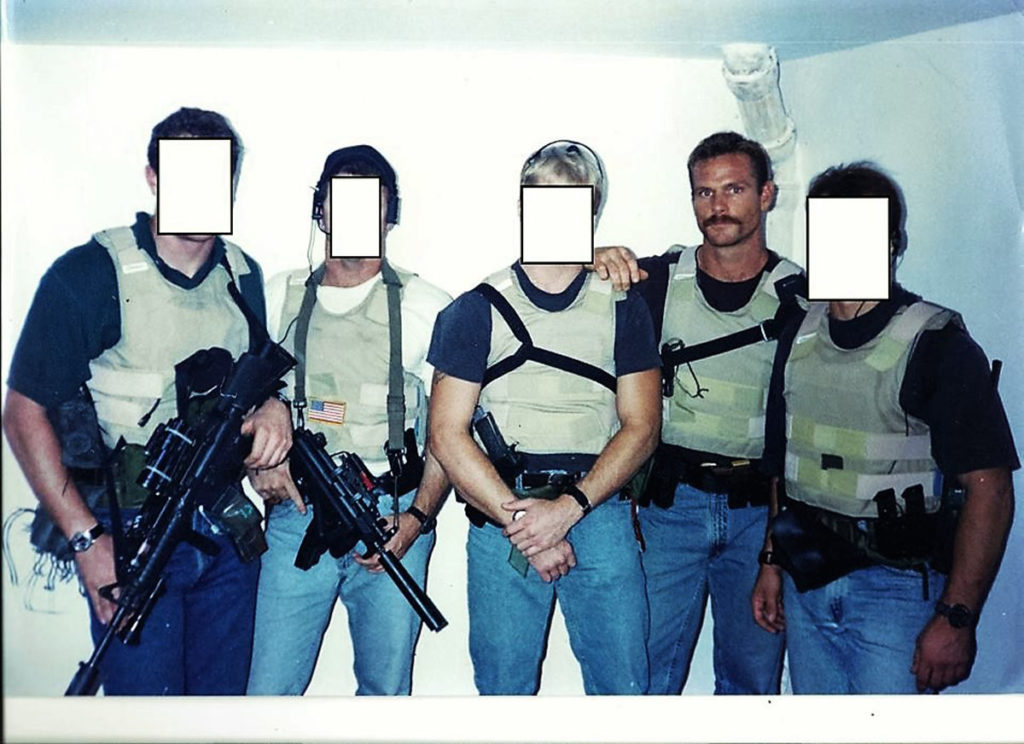 This photo provided by Delta veteran, Pat McNamara shows Pat and his fellow team members during a low profile mission.

It was common for the Unit to reach out to the competition world for training. Delta emphasizes accuracy and, to that end, brought in some of the best shots in the world. These included Jerry Barnhart, Rob Latham, and others. These shooters also influenced the development of the Unit’s 1911’s. Fire control components were improved, different operating controls were tested, and the guns got better. One such problem was that the Novak sights were shooting loose. As a result, the Unit adopted the fully adjustable Bomar rear sight that was “buried” in the slide for a low profile. The Unit transitioned to rail guns after Brian retired. 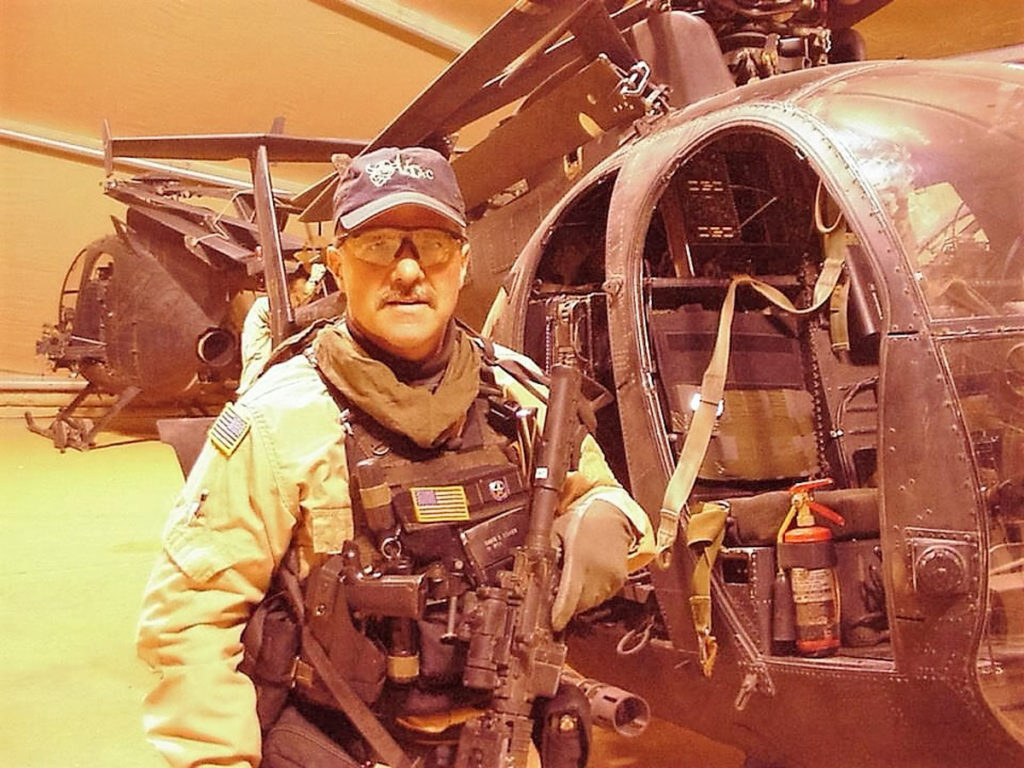 Delta was not the only special operations unit that carried 1911. (Pictured here is Greg Coker, former 160th.)

While at the Unit, Brian was an instructor in CQB and breaching. He also served as the program manager and primary instructor for shooting and hand-to-hand combat. He also competed at the national level in both precision and action shooting. He is a U.S. Army Distinguished Pistol Shot and has been awarded the President’s Hundred Tab. Other marksmanship accomplishments include being the Overall Winner- 2005 Joint Special Operations Command Small Arms Championship and 2003 North Carolina Indoor Conventional Pistol Champion. While reluctant to get into specifics regarding pistol standards, Brian stated that headshots from 25-yards and solid body shots from 50-yards were standard. 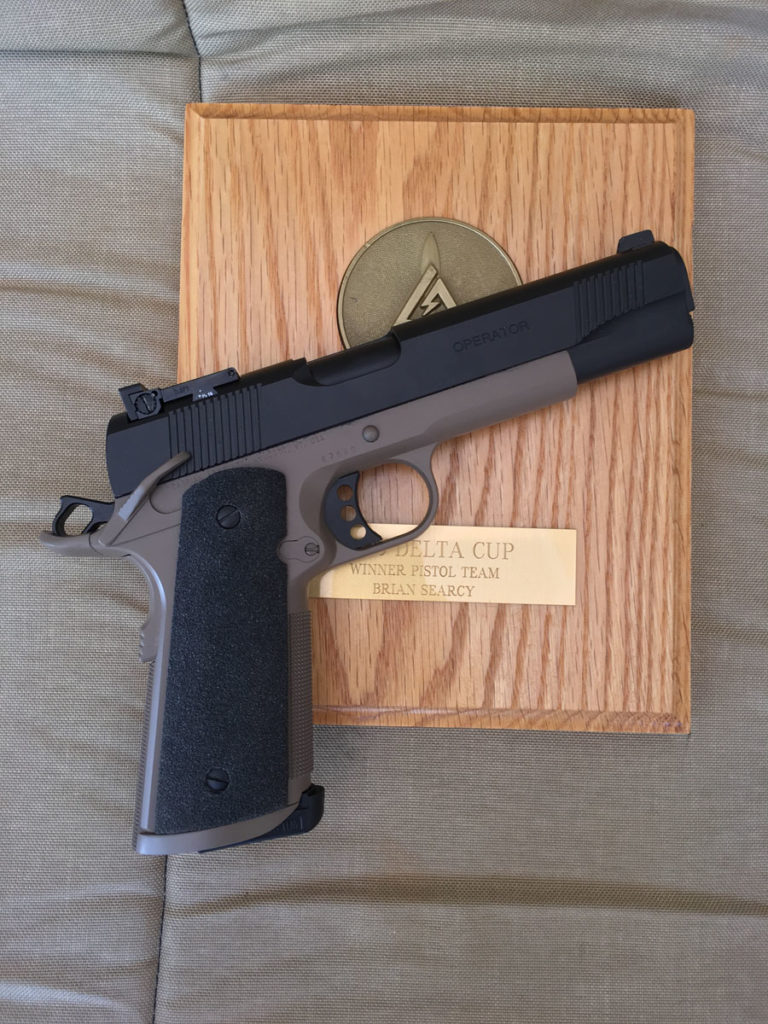 Brian won the units Delta Cup team competition while with the Unit.

After what could be considered several full careers, Brian settled outside of Fayetteville, North Carolina and opened Pilot Mountain Arms. PMA is a full-service gun shop, but Brian’s real love is building precision rifles for long range competition and hunting. I learned about Brian and PMA from a social media post by Larry Vickers. I was intrigued by Brian’s Delta 1911 build that is a modern version of the last single stack, non-rail 1911 that was carried by Delta. When I contacted Brian, he was kind enough to send me not one, but two, guns. In addition, he sent me some of his memorabilia from his time in the Unit. 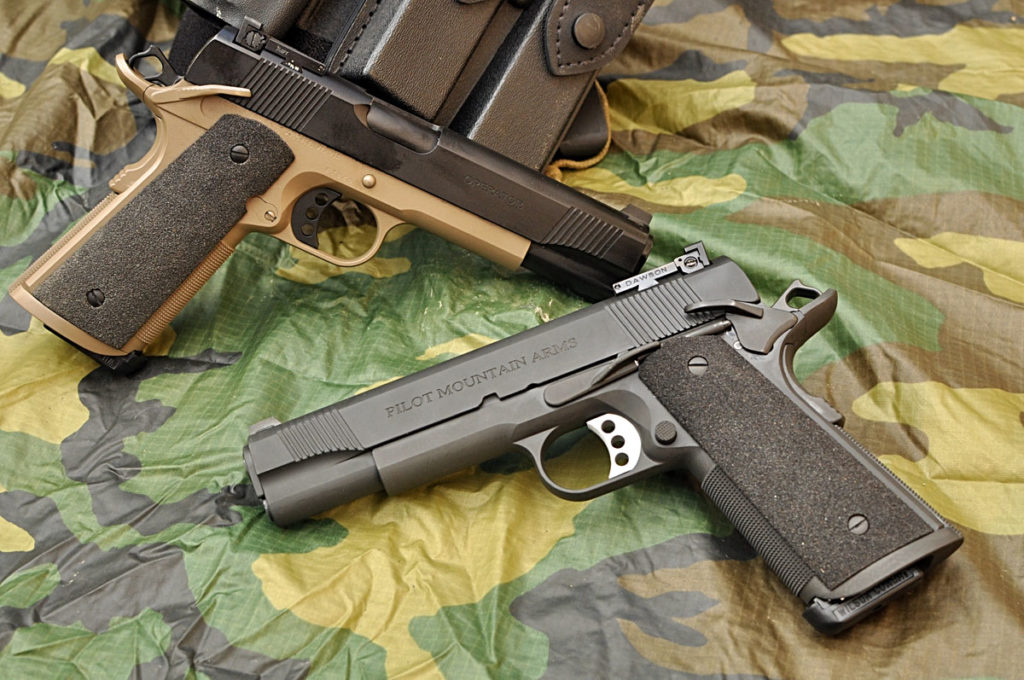 Search send the author two Operators for evaluations.  While he will use Cerokote, his preferred finish is plain parkerization.

The PMA Operator is a hard use, no-nonsense 1911 that is built for a violent world. It should come as no surprise that there are no MIM parts in this pistol. As with the Delta guns, the PMA Operator is built on a Caspian frame and slide. The front strap is checkered with an aggressive 20 LPI pattern. A Smith & Alexander magazine well/mainspring housing is fitted and blended with the frame. It also receives the same 20 LPI checkering as the front strap. While Brian does not personally care for an ambi safety, out test pistols came with an ambi from Ed Brown. The slide stop is a Bullet Proof model from Wilson Combat.  The beavertail grip safety is also from Ed Brown and is set to disengage when depressed about half way. According to Brian, “This helps eliminate the problem of the pistol not firing if you miss the grip slightly on the draw…or don’t have a perfect grip.” As a historical note, many Delta operators disabled the grip safety on the pistols using a variety of methods to include tape and rubber bands. Brian fits the safety, after the trigger job, to ensure proper engagement. A long aluminum trigger is set at 3.5-3.75 pounds. 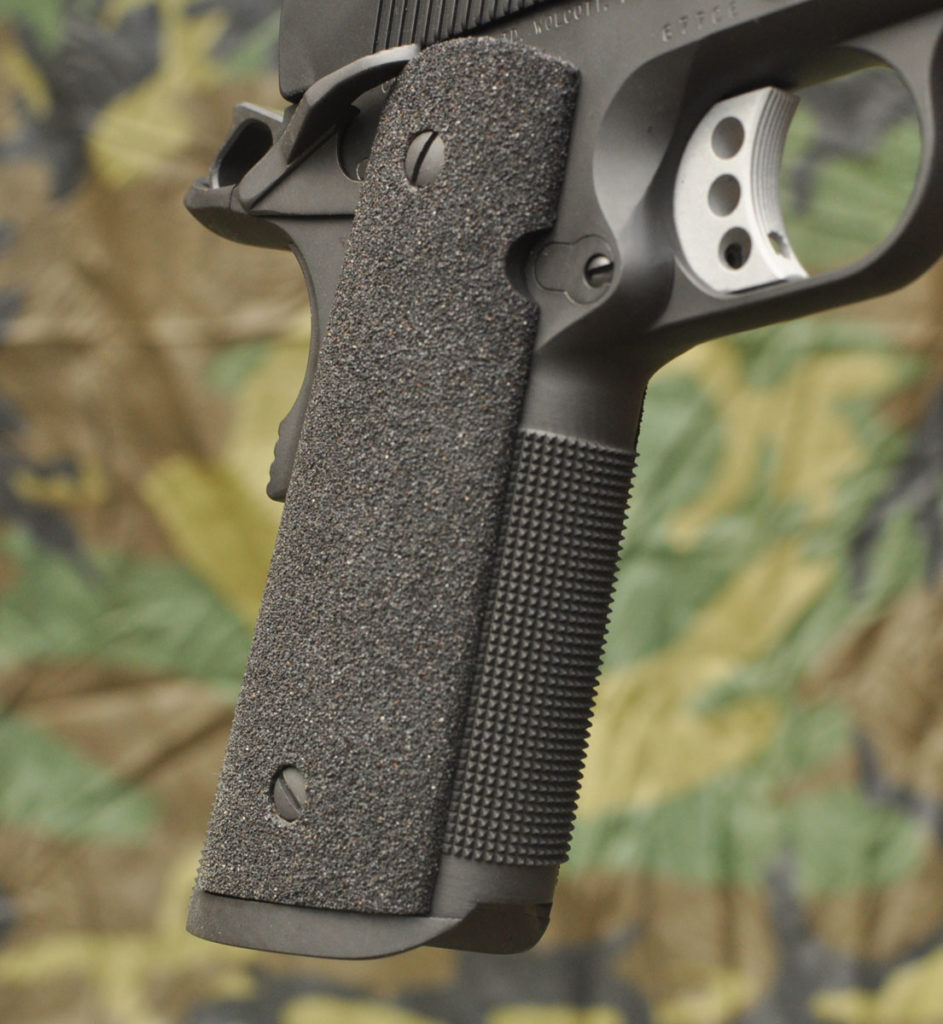 The front strap of the Operator has 20 LPI checkering. The stocks are Jerry Barnhart Burner stocks that offer an aggressive and positive gripping surface. 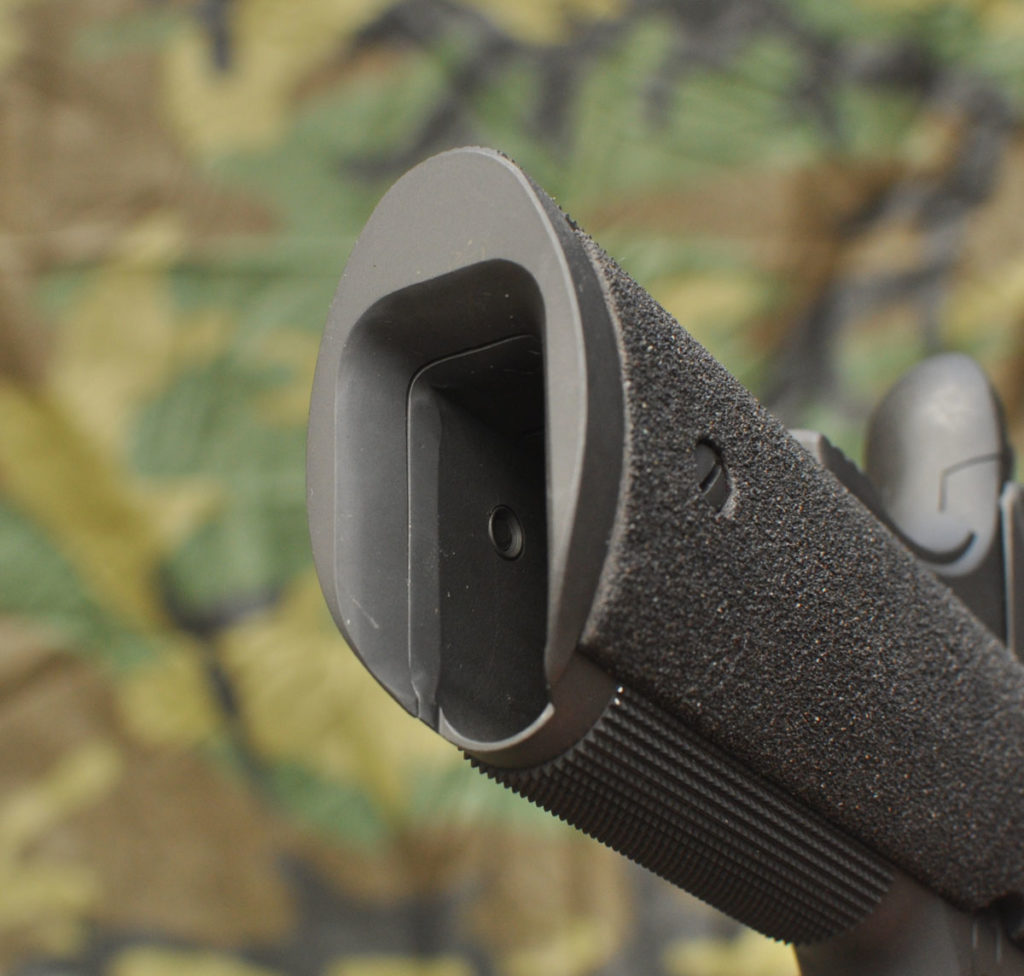 Searcy fits and blends a S&A magazine well to the Operator and blends it to the frame. 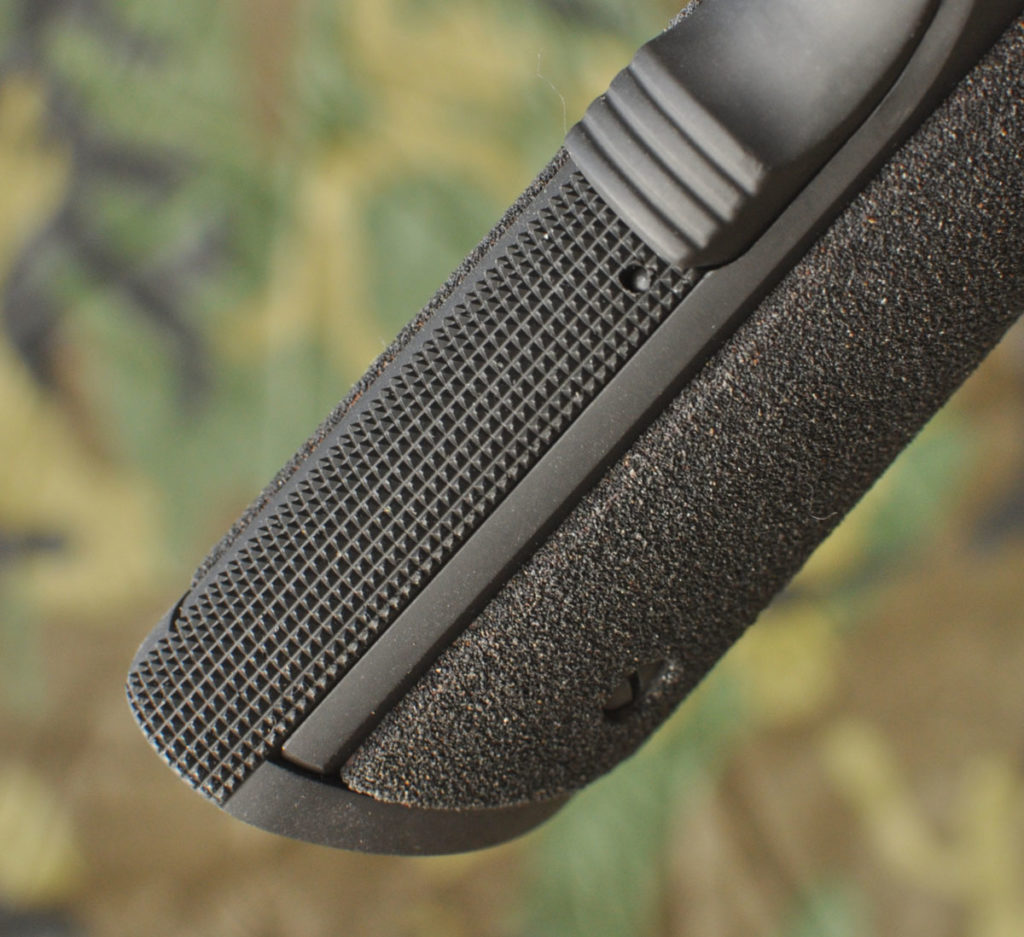 The back of the mainspring housing is also checkered.  The grip safety is from Ed Brown.

On the top end, Brian uses a Dawson adjustable rear sight that is a clone of the Bomar unit.  The sight is mounted slightly forward of the rear of the slide and recessed to protect the blade. Both the rear sight and the Heinie front sight feature Tritium inserts for low light engagements. Forward cocking serrations are standard and provide a surface for positive slide manipulation. The ejection port has been relieved to allow a live round to be cleanly ejected. The entire pistol has been dehorned and the edges are softened, prior to the final finish. Brian ships his pistols with two Wilson 47D magazines. Finally, the pistol comes with Barnhart Burner stocks. These stocks are very aggressive and provide a positive grip under any conditions. 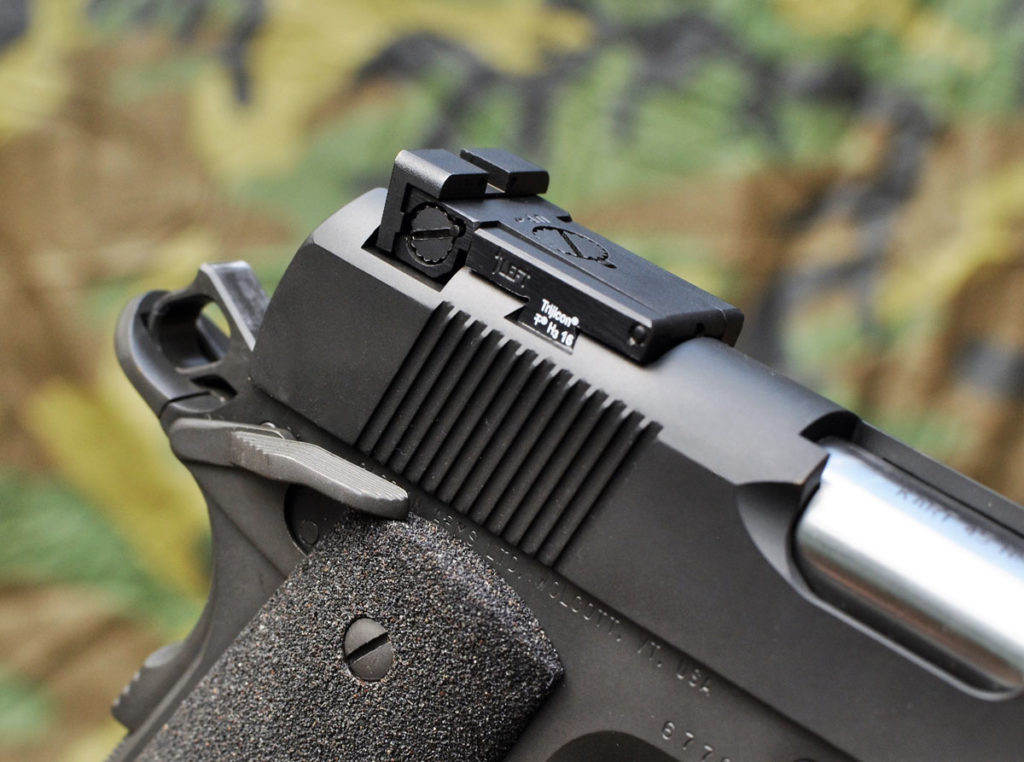 While Delta used a Bomar rear sight, Searcy uses a Dawson adjustable that is very similar to the Bomar.  The sight is buried in the slide and the edges are broken.

To meet Brian’s tough accuracy requirements, he selected a match grade barrel and bushing from Kart.  After final fit and finish, the pistol is zeroed at 25-yards using 230gr. FMJ ammo. Brian guarantees that every Operator pistol will shoot less than a 3” group at 50-yards. To prove it, he included a ten-shot group, test target, shot at 50-yards from a rest. The target is signed and dated.

After many years of carrying a 1911, Brian generally prefers Parkerizing. Parkerizing has excellent corrosion resistance, holds oil well, and doesn’t affect the tolerances. In addition, it is easily touched up. The fit and finish of both test pistols was everything I expected. The slide to frame fit had no play and operated like “glass on glass.” The rear sight notch on the Dawson unit was shallower than I am accustomed. This took some adjustment but, after a 100 rounds or so, it became a non-issue.

Brian told me not to baby the pistols and to “shoot the fool out of them.”  While I don’t have an unlimited supply of ammo, like Delta, I was able to run nine different loads through the Operator. Not surprisingly, I had no issues or malfunctions. I ran everything from the super light, Polycase Inceptor 114 gr. ARC frangible composite bullet to Wilson Combat’s 230 gr. XTP-HP. Velocities ranged from 1,278 fps for one of the Polycase loads to 810 fps for Aguila’s 230 gr. FMJ. The Operator ate everything we fed it. Accuracy testing was shot from a braced, seated position and groups ranged from 1.25” to 1.75”. 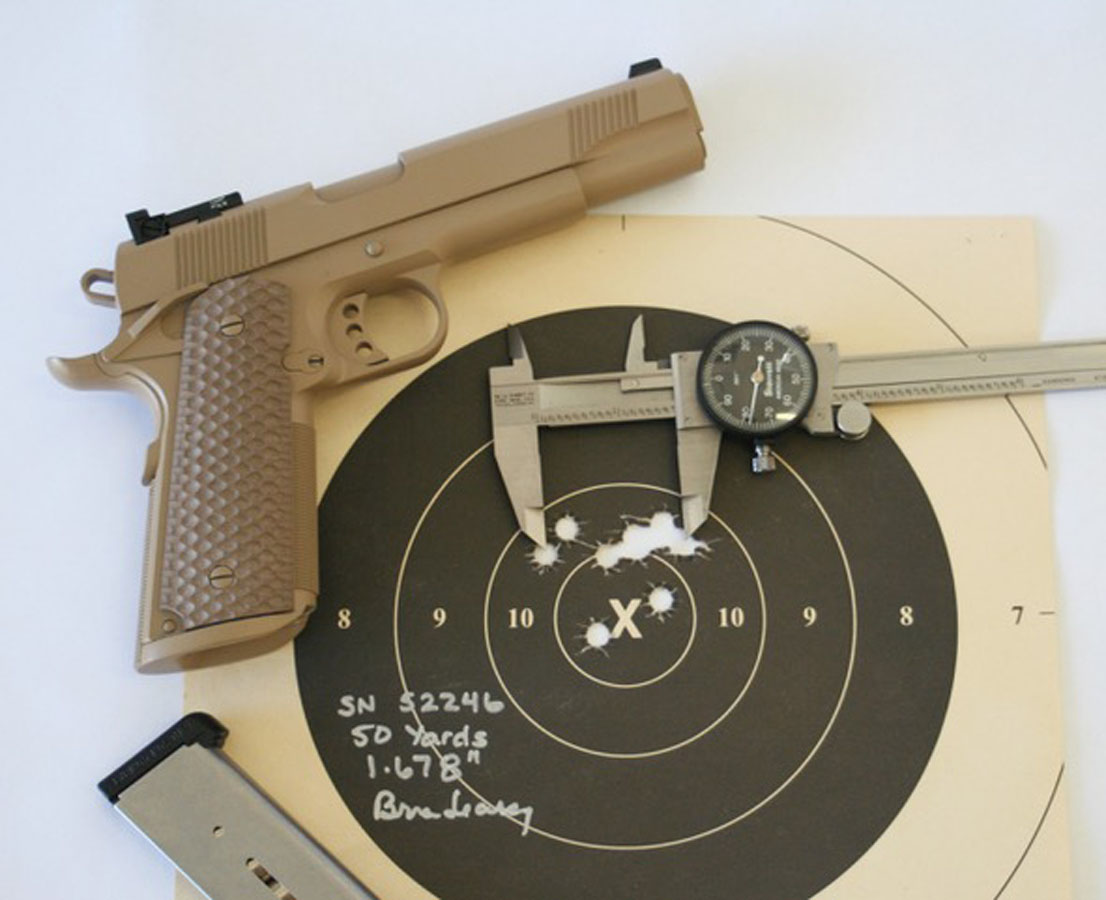 Test Target – Brian guarantees that every Operator pistol will shoot less than a 3” group at 50-yards. To prove it, he included a ten-shot group, test target, shot at 50-yards from a rest.

The only issue I had with the PMA Operator was with was the Wilson extended slide release. My thumbs forward grip tended to ride over the rear edge of the slide release. This prevented me from getting consistent slide locks on the last round of the magazine. While I left the black gun in the standard configuration, I wanted to carry the two-tone gun. I swapped out the Barnhart Burner Grips for a set of Operator II grips from VZ Grips. The Operator II grips feature golf ball texturing on the forward half of the grip and straight line, 45-degree serrations, on the rear half of the grip. A large relief cut assists in activating the magazine release. Made from durable G-10, the VZ grips are both durable and attractive.  The Operator carried nicely in my Raven Phantom rig.

It was with some reluctance that I had to return the pistols to Brian. Instead of mailing them, I took a trip to North Carolina and spent the day with Brian. I found him to be very approachable and genuine. He is very unassuming, laughs easily, and does not take himself too seriously. I asked him to e-mail me some thoughts about his unique career. To quote that e-mail, “I was fortunate to work with the most dedicated, capable, and professional group of individuals I’ve ever seen concentrated in any organization…I’ve never seen any other organization that has the sheer depth of talent at all levels.  I’ve never worked so hard to be so mediocre in my life, as when I was with the Unit.”

What is special about Brian and his 1911 pistols? First, he has been in a lot of gunfights and his views are based on his experiences. Second, I don’t know of any other gunsmith that has put as many rounds down range as Brian. He understands the importance of both accuracy and reliability. Finally, the PMA Operator is a very cool piece of history with its roots grounded in a compound at Ft. Bragg.

For those who want a 1911 that is battle proven, and that can be relied on for the “worst day of your life,” give Pilot Mountain Arms a look.

Next post: Five Reasons You Should Buy That M1 Garand You’ve Been Eying