Remington has been in the business of building legendary rifles for a long time. I’ve been using them for long-range shooting for years but those were heavy barreled guns focused on accuracy, not so much on practicality. Many of the requirements that shaped the scout rifle concept can be easily rolled into that of a practical bolt action rifle suitable for many uses. A rifle with some of these characteristics can be an important part of anyone’s collection, capable of taking game or even defending oneself if necessary. One of Remington’s most practical rifles is the Model Seven Threaded, which features a short, threaded barrel, a hydro-dipped synthetic stock, and a one-piece scope base.

On the outside the Model Seven shares some visual similarities with the venerable Model 700, but that’s not exactly the case. They may have started out as round actions but after that, there is very little cross compatibility between these two rifles.

The Model Seven Threaded is less than 36″ long, weighs under six pounds, is chambered in .308 Winchester or .300 Blackout.

The first noticeable difference is that the Model Seven’s action is a half-inch shorter than a Model 700’s. The ejection port is also longer on the Model Seven with more rounded edges to better facilitate loading and ejection.

The Model Seven is a push feed-type action that uses a bolt with the familiar dual locking lugs and swept bolt handle common to the Remington Model 700. 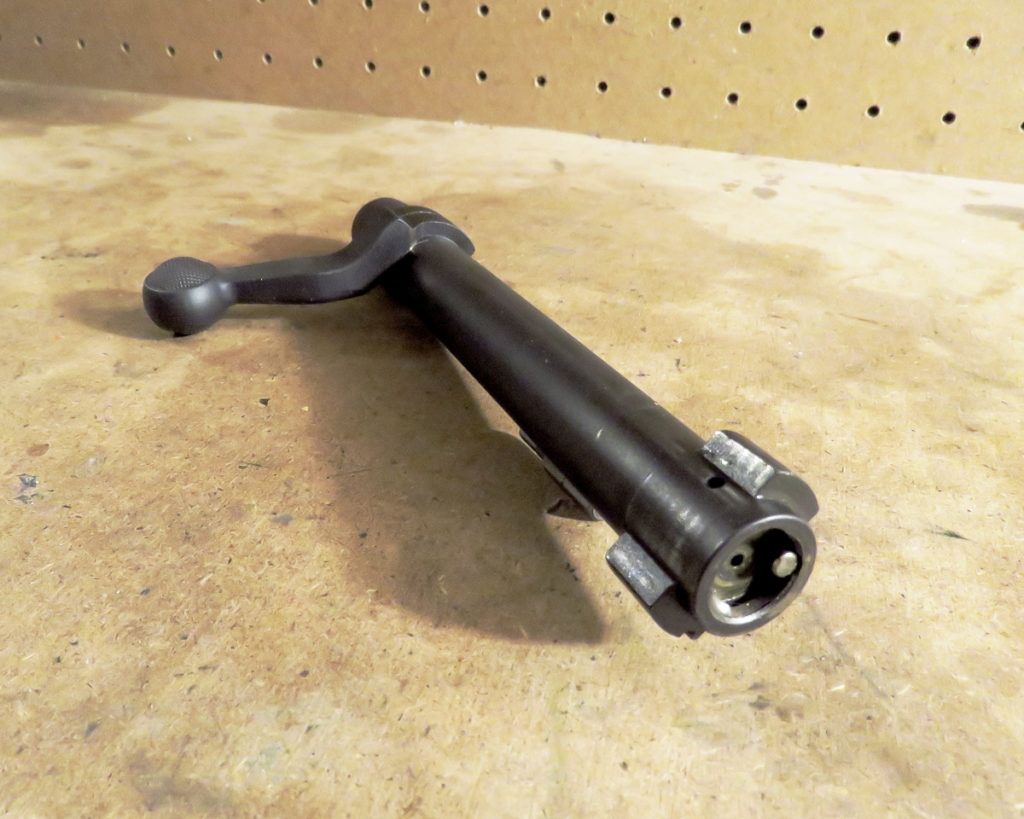 The dual locking lugs create the famous “3 rings of steel” that Remington rifles are famous for.

This renowned design uses a counterbored bolt face to encapsulate the cartridge head within the first ring of steel, which is further surrounded by the barrel, and finally the action itself. In the event that there is a case rupture, the shooter can be assured that the rifle will safely take the pressure and vent the gasses with little harm done to the shooter.

Of course, the changes done to make the action more compact required modifications to the trigger and bolt stop layout to keep it functioning properly. The trigger is moved forward slightly resulting in it and the bolt stop being held in place by their own pins as opposed to being mounted in tandem like on the Model 700. 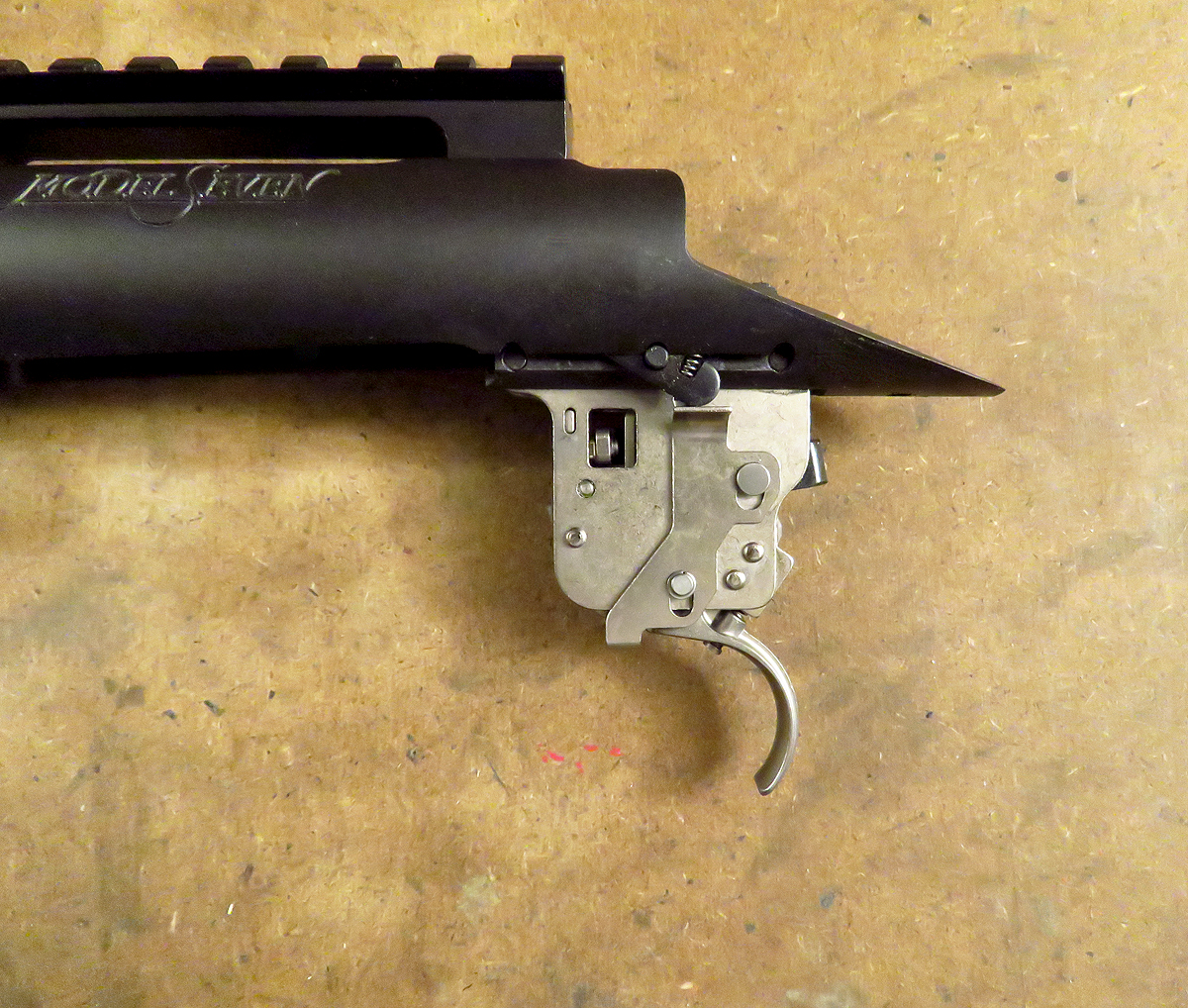 As a consequence of the actions changes, the trigger is proprietary to the Model Seven.

A Picatinny scope base is standard on the Model Seven Threaded, held in place with four 6-48 screws, which are plenty strong enough to take the abuse of a .308. 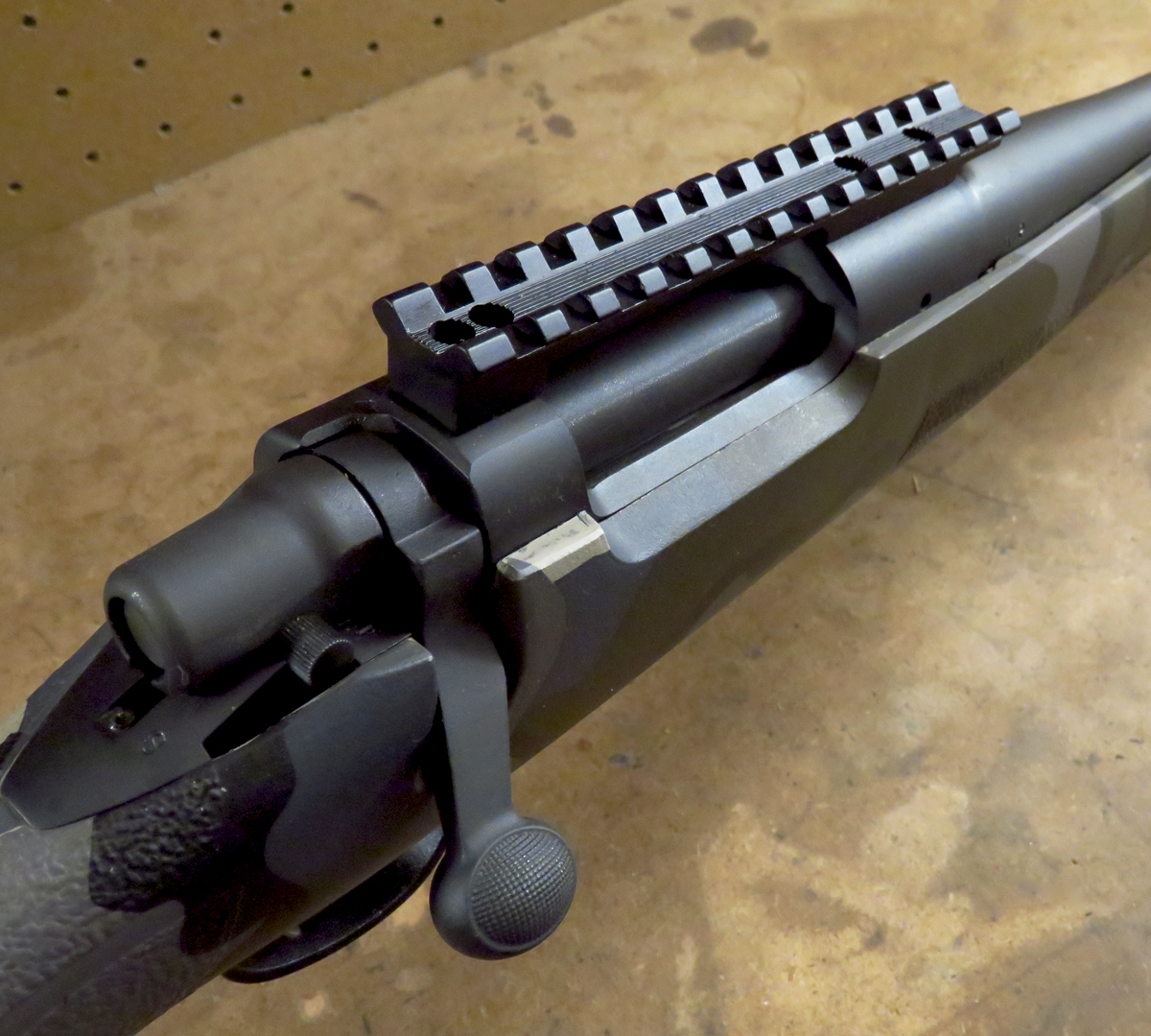 The Picatinny scope base opens up all sorts of options when it comes to selecting the scopes and sights that will work for you.

Sticking with the theme of a multi-purpose rifle I mounted up a Vortex Strike Eagle 1-6X optic set in a of low Burris rings, which seemed like a good compliment for this kind of rifle. 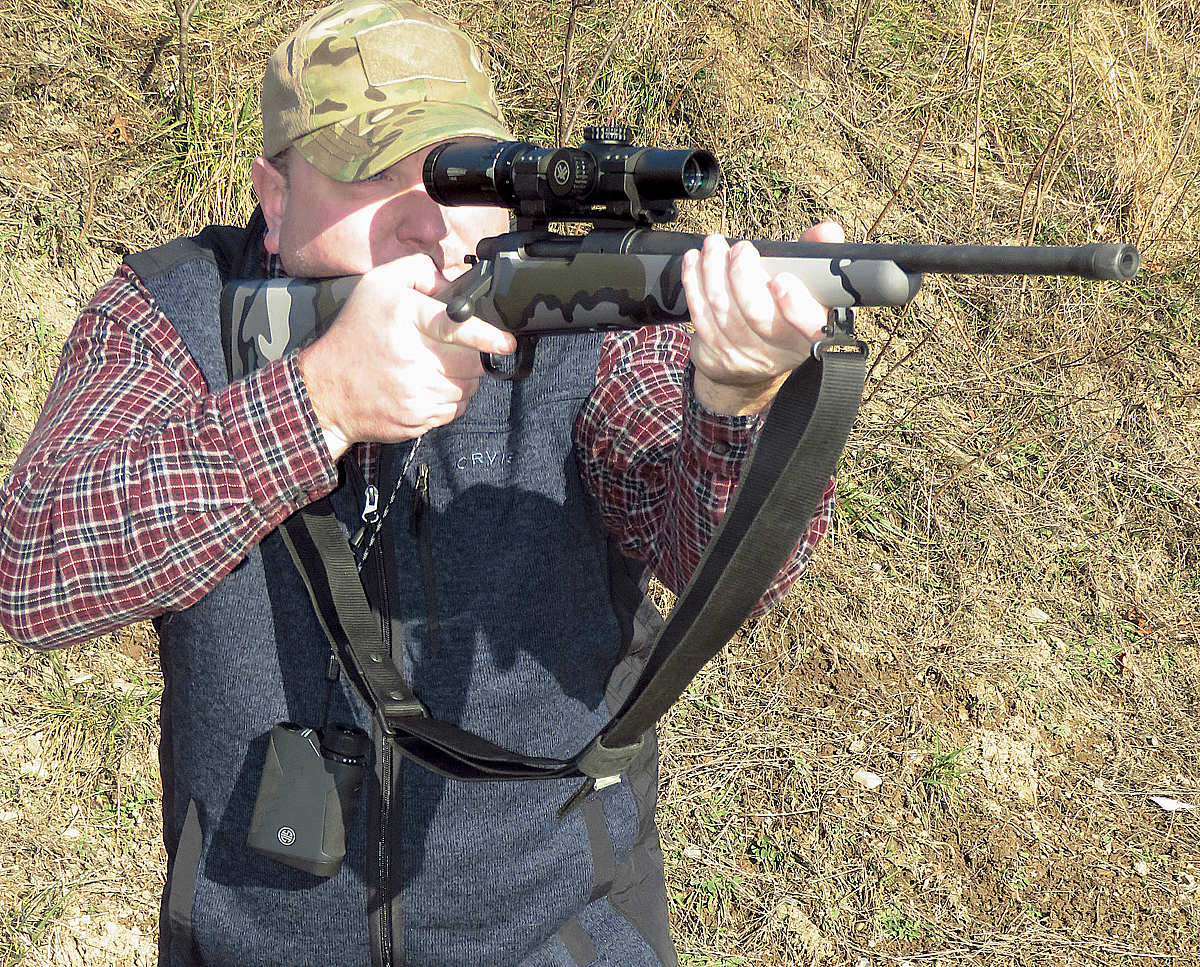 The 1X setting on the scope made it useable at close distances while the 6X high end worked just fine for those 200-300 yard shots. 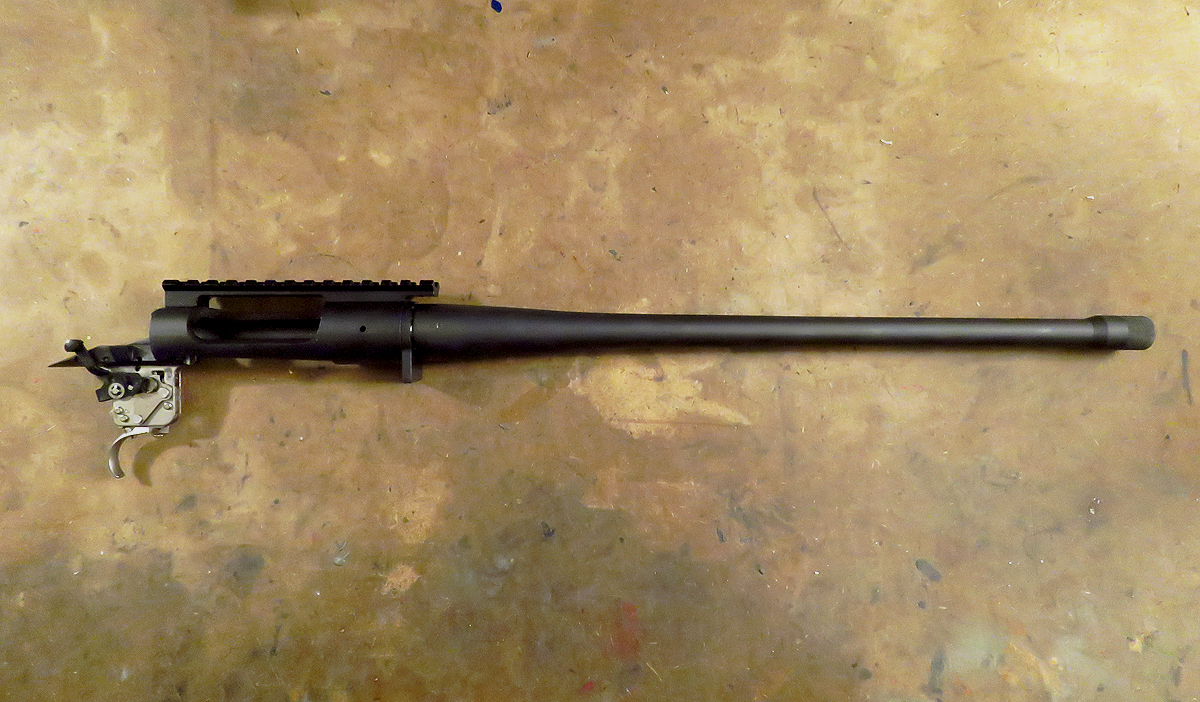 The lightweight 16.5” barrel appears to be the same one used on the AAC Micro 7. Like that rifle, the barrel flares out at the muzzle just before the 5/8-24 threads to provide additional surface area for mounting suppressors or a muzzle break. 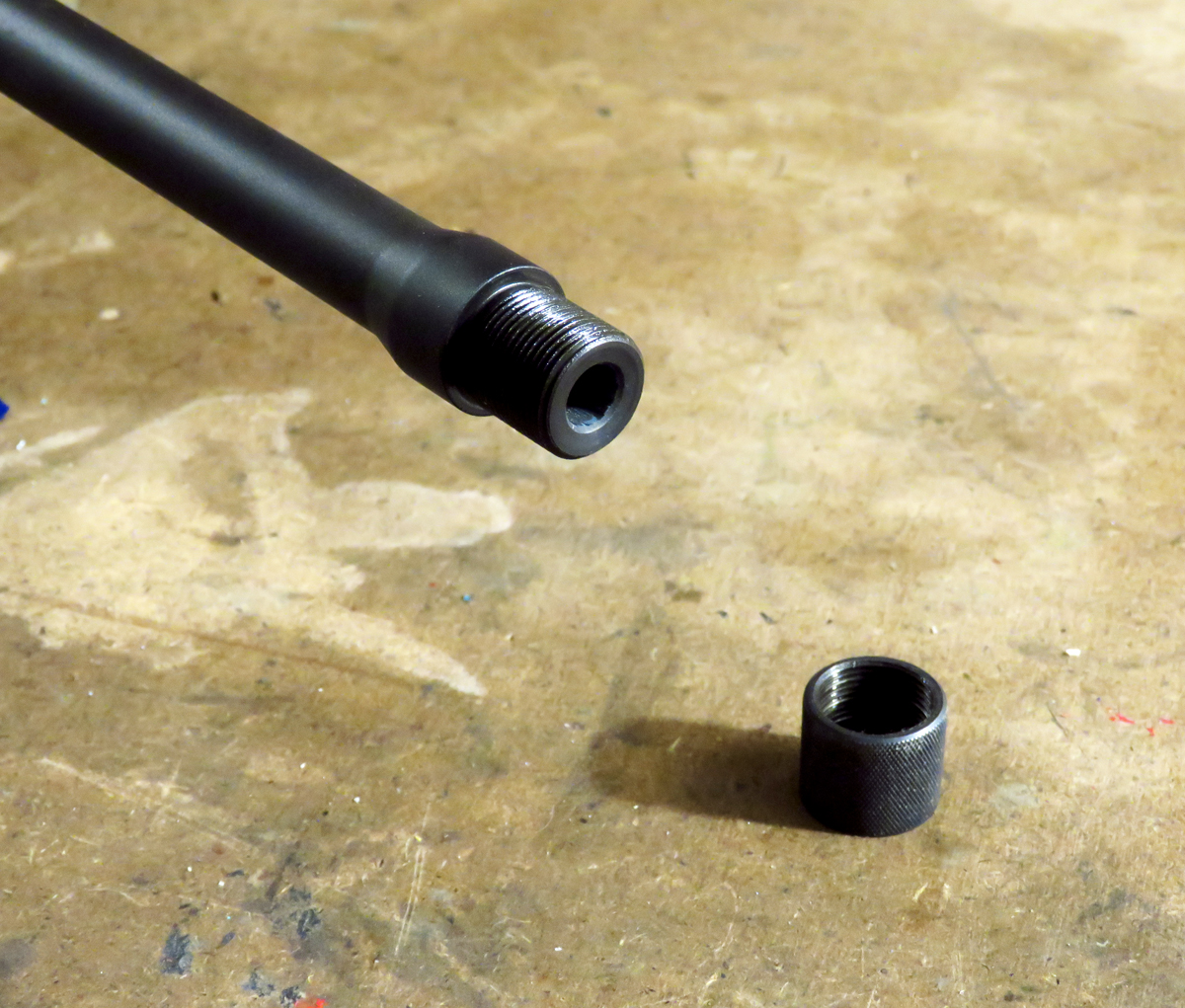 This particular rifle is chambered in .308 Winchester with a 1:10” twist that is sure to handle everything from lighter hunting loads up to heavy subsonics without any problems. The shortened barrel length and compact action contribute to bringing the total weight of the rifle down to only 5 lbs 9 oz with an overall length of just 35.125″.  That makes this an exceptional option for those going up in tree stands, navigating dense woods, or climbing steep hills in search of their quarry.

This rifle comes with a BDL floor plate designed to accommodate the shortened dimensions of the action with a magazine capacity of 4+1. That being said, the floor plate is a little different compared to the typical Remington short action BDL you see on other models. 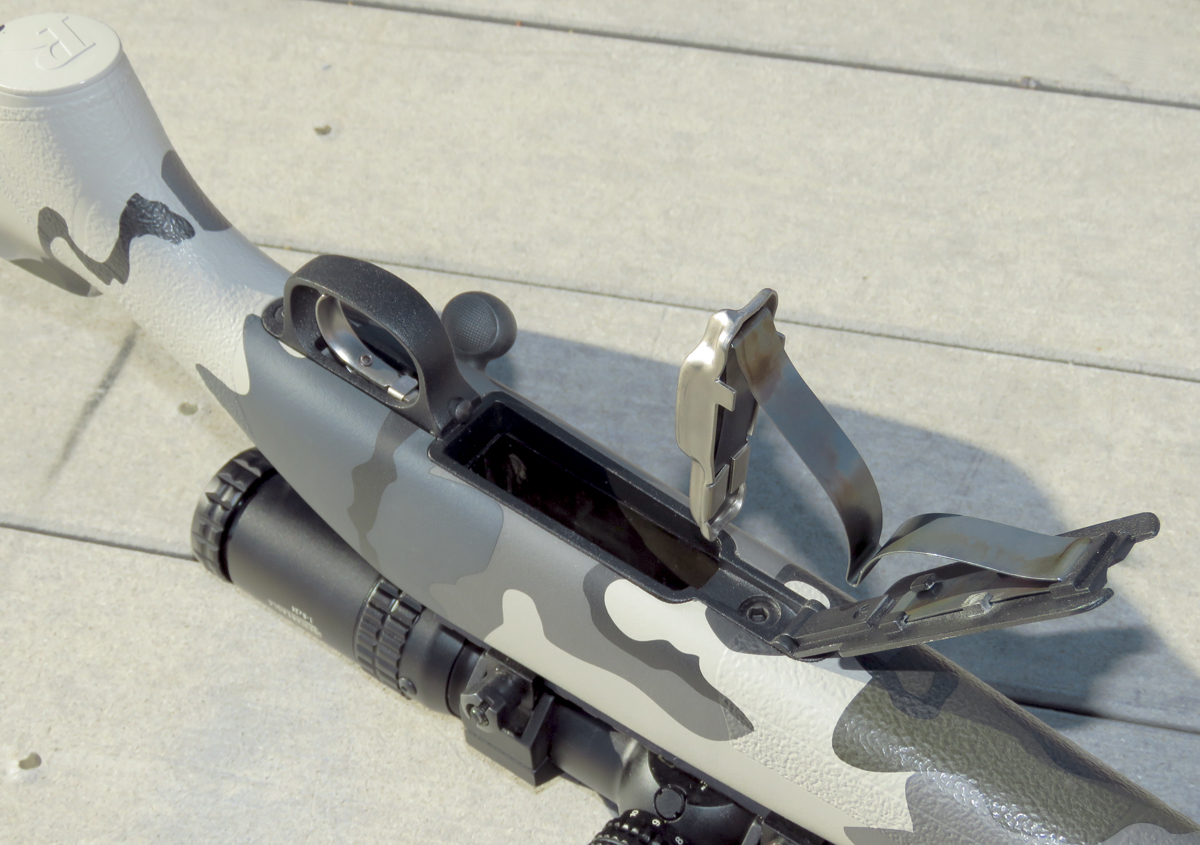 The shortened length of the action means that the front action screw is actually underneath the hinged floor plate.

When it comes to the stock, it is, for the most part, a standard Remington synthetic stock with two sling swivel studs and a Remington SuperCell recoil pad at the back. While it’s pretty basic, the synthetic stock is impervious to the elements, something that’s important when the rifle could be used in the sun, rain, and snow year round. However, Remington added some character to the stock by hydro-dipping it in a Kuiu Vias camouflage pattern that’s visually striking and effective in a variety of environments. 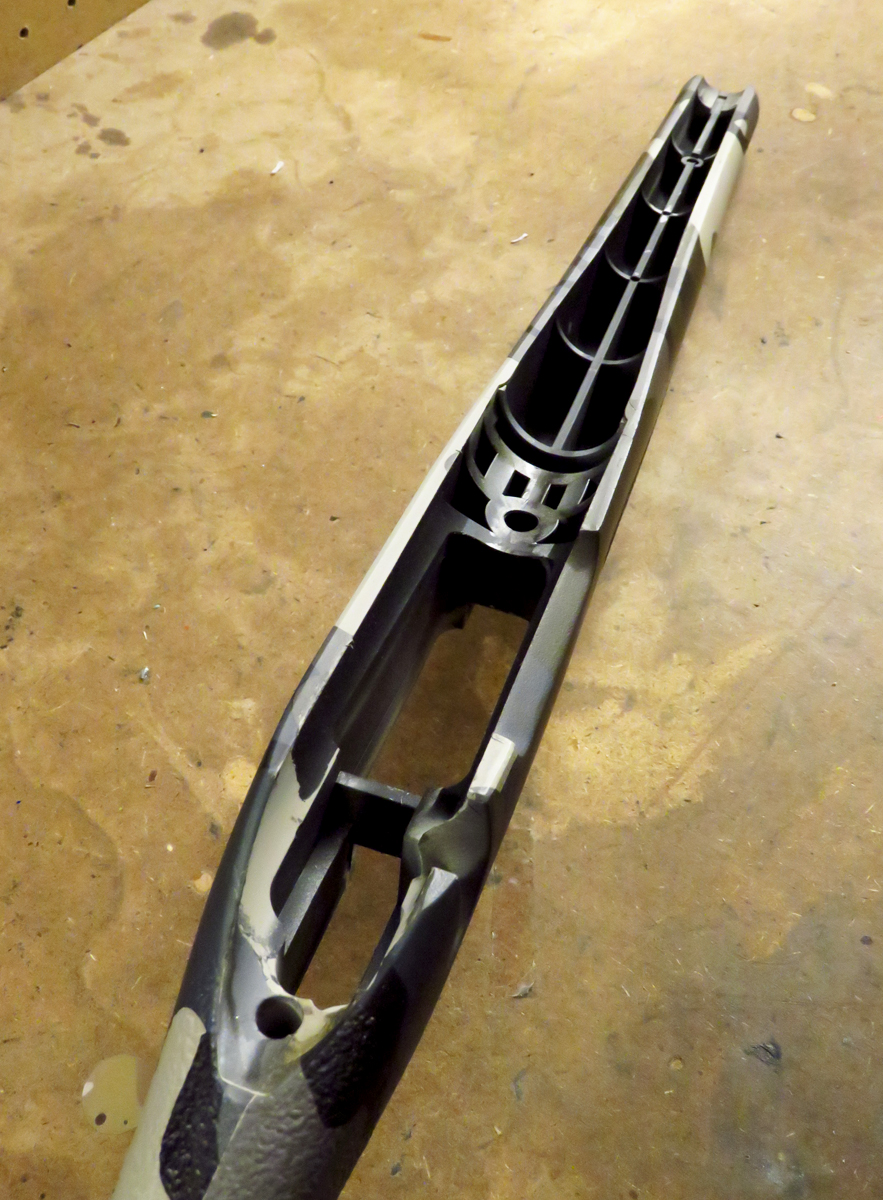 Although the Model Seven Threaded is also available in .300 Blackout, in terms of practicality the .308 Winchester made more sense given the versatility and overall availability of the cartridge. To that end, I pulled together an assortment of ammunition from local gun shops that I felt would most likely be used in this rifle.

Now, first let me be frank, if you are looking for a tack driving rifle that you can shoot all day, I don’t think this is the rifle you’re looking for. It’s a lightweight, short barreled .308 so it’s somewhat of a thumper, luckily the squishy recoil pad helps take up some of that recoil. In my opinion, though, the thing really holding this rifle back is the X Mark Pro trigger, it’s just too heavy, plain and simple. It did break cleanly with no creep but it did it with an average break of 6 lbs 1.5 oz according to the Lyman trigger pull gauge. Remington will tell you that the trigger is adjustable from 3-5 pounds but I couldn’t get the pull weight anywhere near that. So, a consequence of having a trigger pull heavier than the rifle itself is that marksmanship can sometimes suffer a bit and at times I was struggling to shoot a good group. Also, keep in mind that these were shot with a six power scope.

I pressed on and while I think the groups could’ve been better with a lighter trigger to my surprise one of the best performers turned out to be one of the cheapest. 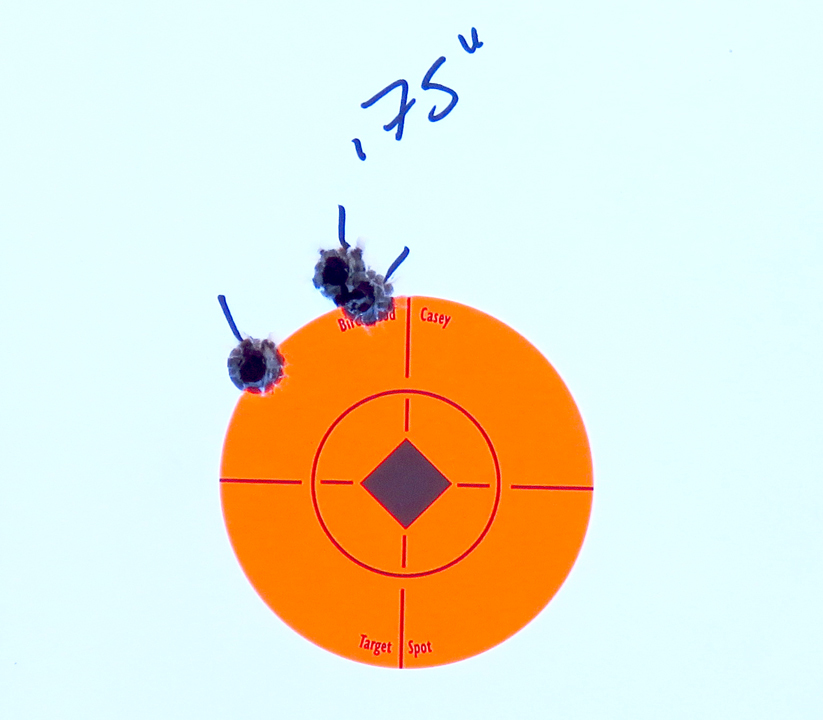 The Hornady American Whitetail ammunition using a 150 gr InterLock bullet had one of the best groups of the day at 3/4″ and it matched the BDC reticle in the Strike Eagle almost perfectly out to 300 yards.

The Hornady Black 155 gr A-MAX ammunition was no slouch either and even though it didn’t print the smallest groups it was very consistent from 100 to 300 yards, certainly good enough for most practical applications. 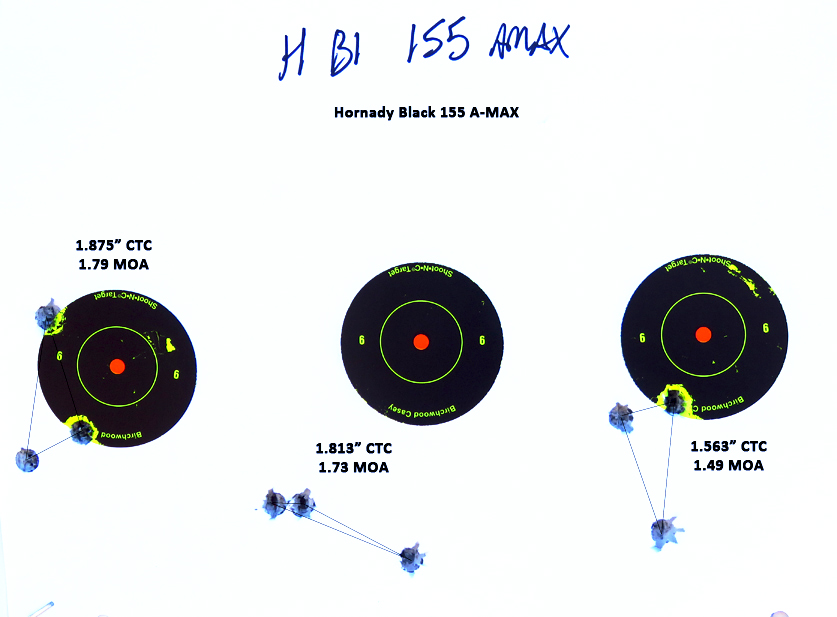 Like the American Whitetail ammunition, the Hornady Black 155 gr A-MAX ammo also matched up well with the BDC but it retained more speed and energy at every distance. I understand that the A-MAX is primarily a match bullet but the A-MAX has proven itself on a multitude of game over the years and is also used in the TAP LE line. It would be choice for a multi-purpose round to use in this rifle that you could do just about anything with.

Although the bolt action rifle is obsolete in this day and age in terms of being a defensive tool sometimes the tool you have is the best tool to use. To that end I wanted to see how the rifle would handle being used on a more defensive footing, which meant snapshots, emergency reload, and failure drills at close distances. Coming from a precision rifle background those types of drills aren’t necessarily something that I practice very often with a bolt gun so I was eager to get out there and run the bolt.

Back at the range, the criteria for my snapshots were to hit an 8″ circle at 25 yards with just 1.5 seconds on the clock. It’s not exactly per the Cooper standards but it seemed reasonable to me given that I’d never done this with a bolt gun before. The compact, lightweight design of the rifle didn’t give me any issues when I had to bring the rifle into the pocket of my shoulder and get a flash sight picture. 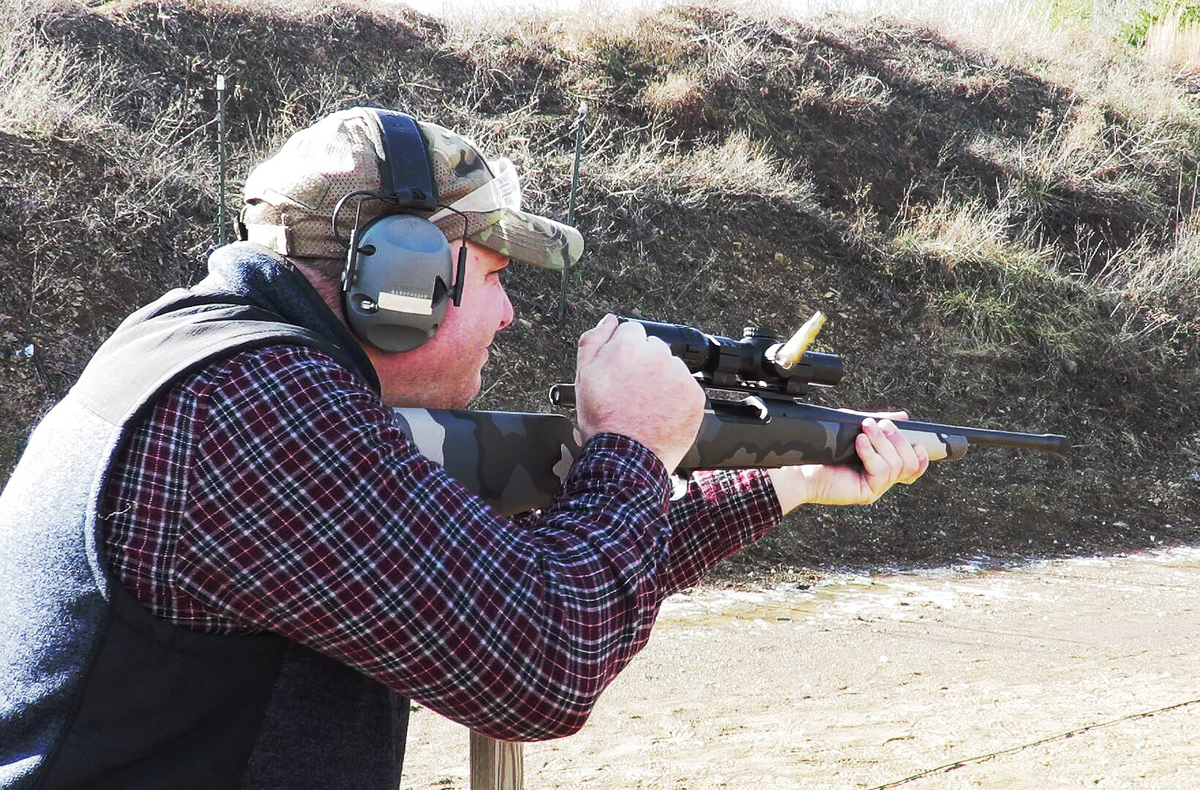 Ultimately, I managed to get 81% of my shots inside the 8″ circle and most of those shots broke under the 1.5 second par time too.

Unfortunately, it felt like the heavy trigger pull was holding me back again since it felt like I had to snatch the trigger in order to break a shot under par instead of simply being able to press it. This did have an observable impact on the accuracy of the rifle while doing these drills.

During the emergency reload and failure drills obviously any binding of the action is unacceptable but luckily I experienced none of that. I was more aggressive than usual while running the bolt and I appreciated the smoothness of the action and reliable feeding from the magazine. 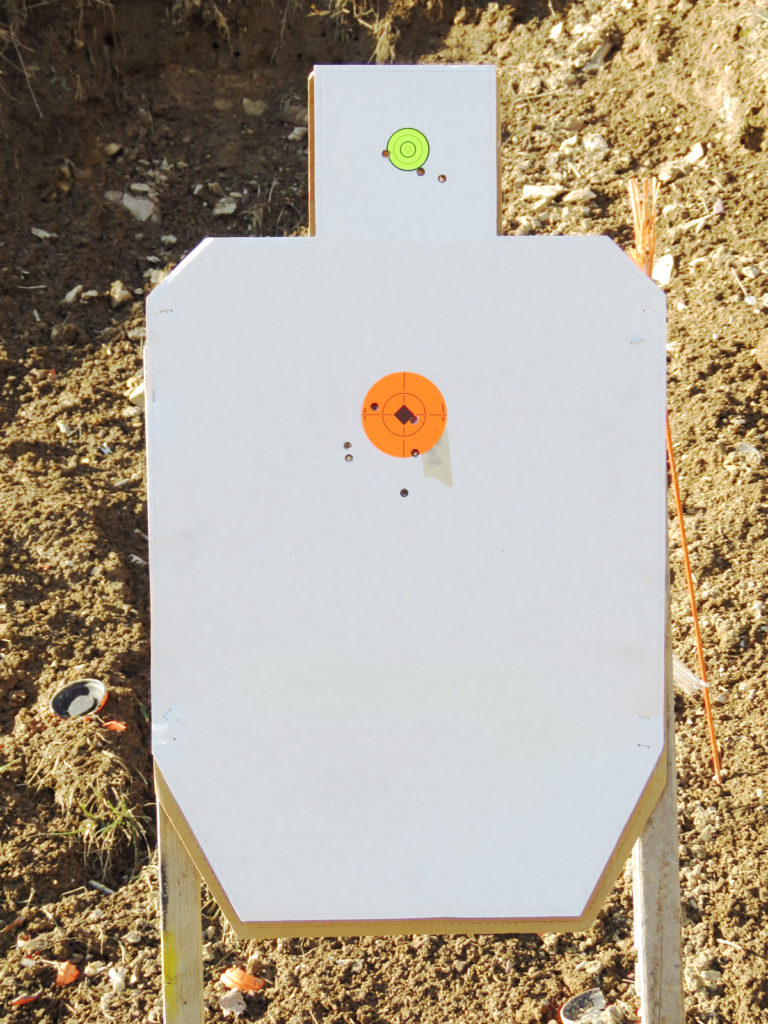 Three sets of failure drills on target at 10 yards.

I had set a par time for myself of five seconds for both drills and honestly, I think I could’ve been a little faster at both. Failure drills were done in about 3.5 seconds on an IPSC target at 10 yards and emergency reload drills took a little over six seconds to complete on a 25 yard IPSC. Clearly, I have some work to do but all of the drills reinforced my confidence in the rifle knowing that it will work no matter how hard I need to run it.

These days, everyone expects a 1 MOA rifle and if it can’t do that then what good is it? Well, I certainly see the point but in my experience, this Model Seven has proven itself to be accurate and reliable enough to get the job done. I think there’s certainly the potential for this rifle to be an MOA gun or better and a lighter trigger pull would go a long way to facilitate that. Even still, this is just one example of the Model Seven Threaded and overall it’s a pretty good value considering the threaded barrel, scope base, and hydro dip are provided for only about $60 over a standard Model Seven Synthetic. Those are all things that people tend to do to brand new guns anyway but you get it all right out of the box.  The MSRP of $795 may seem a little steep, but the street price is a lot more palatable at about $650.

***Shop GunsAmerica for your next Remington rifle***