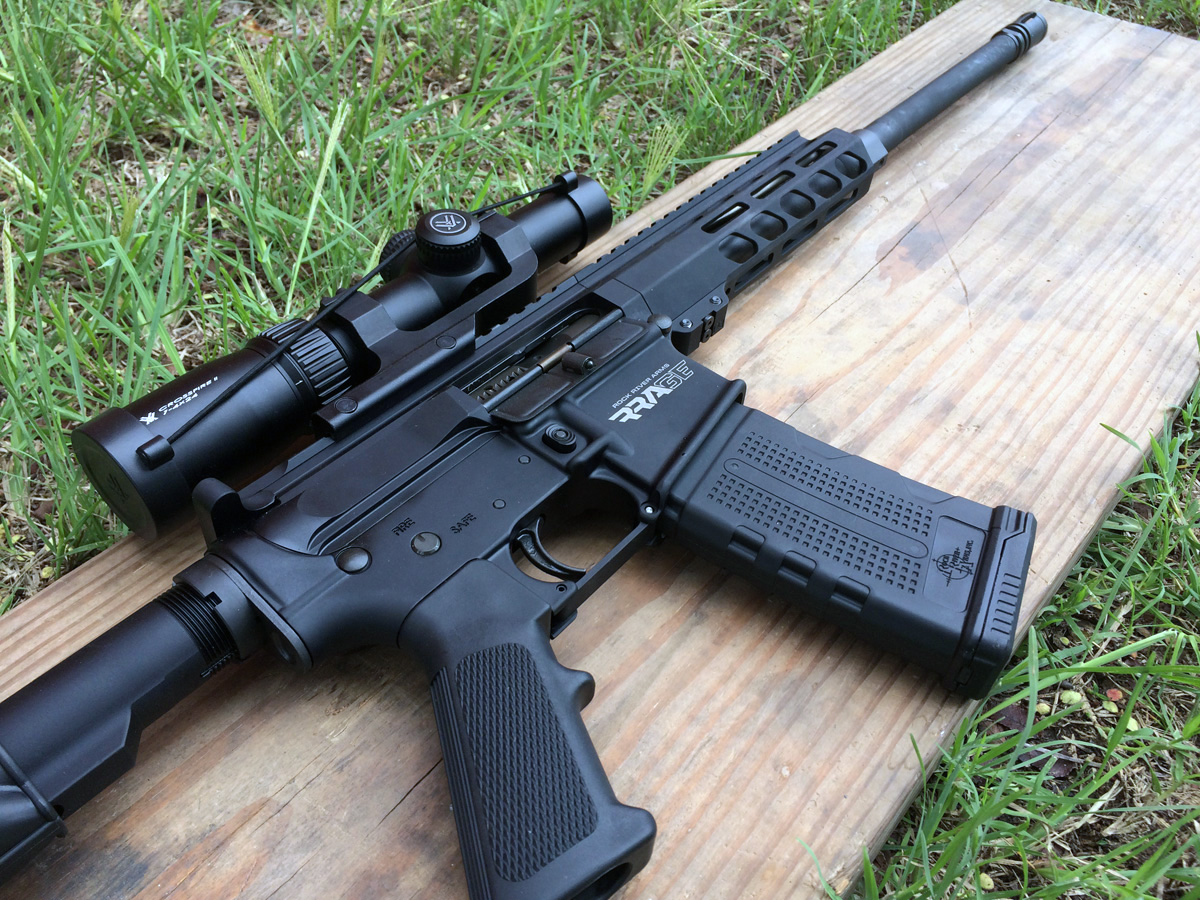 Rock River Arms has been manufacturing premium AR-style rifles since the 90s, but this year they released their first entry-level model.

When it comes to AR-15 platform rifles, 2019 is the Golden Age. Nearly every major firearms manufacturer has their spin on the legendary design and hundreds of boutique companies offer high-performance parts (or “high-performance parts,” as the case may be) for those looking to trick out their build.

The proliferation of small-time AR companies has its downsides, however.

My brother-in-law convinced me to build my first AR, but I spent more time clearing jams than shooting. After replacing the buffer, buffer spring, extractor, bolt, bolt carrier group, and gas block, I finally determined I had a bad chamber. I played ring-around-the-Rosie with the manufacturer until they agreed to sell me another barrel at-cost, though they always maintained there was “nothing wrong” with the chamber and it “cycled fine” when they tested it.

Bargain bin ARs are a dime a dozen, but if you’re looking for a more premium option at a great price, check out the new RRAGE Carbine from Rock River Arms. The RRAGE is the newest iteration of Rock River’s LAR-15 series, but it hits a slightly lower price point than its predecessors—without sacrificing quality or performance. 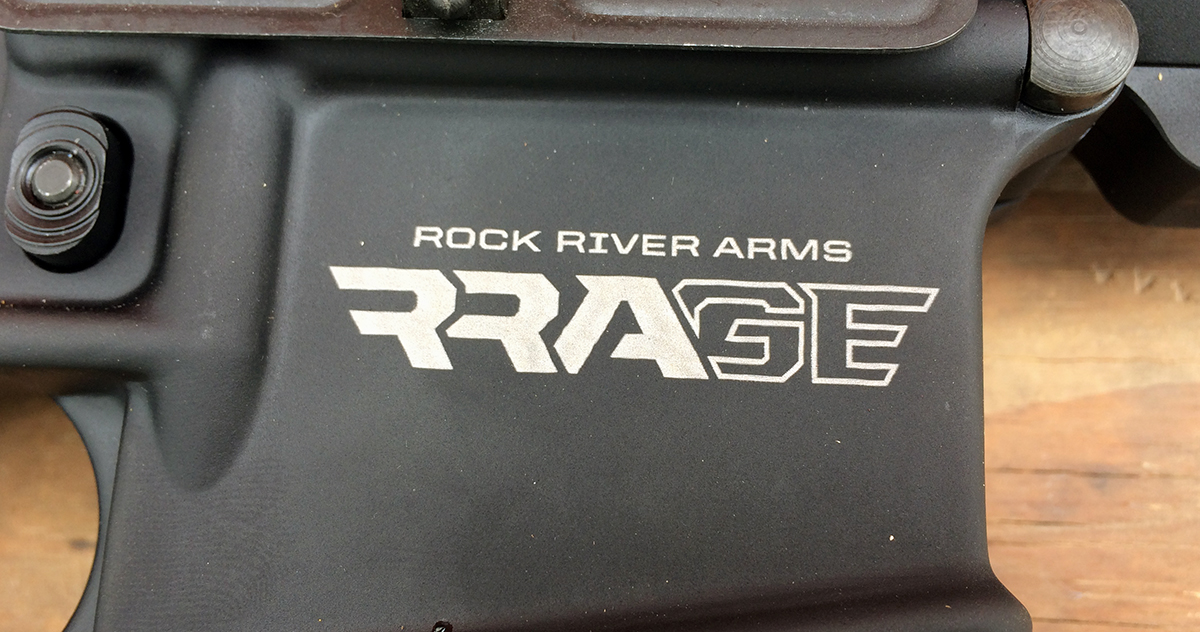 RRA produces all their firearms in Colona, Illinois.

Rock River Arms has been around since 1996 when brothers Mark and Chuck Larson founded the company in Cleveland, Illinois. The Larson’s had been in the firearms industry since the early ’80s but decided to start their own business manufacturing high-quality 1911 parts and they soon expanded to complete handguns.

The brothers jumped into the AR market in the late ’90s, and now the company offers the “LAR” series in a wide variety of made-to-order configurations and chamberings.

In 2003 Rock River Arms put their hat in the ring for a Department of Justice contract administered by the Federal Bureau of Investigation and the U.S. Drug Enforcement Administration. They were the only company to complete all stages of the trial without having to reshoot, and even though they weren’t the lowest bidder, they won the five-year contract. Today, the company still makes products for a variety of DOJ agencies. 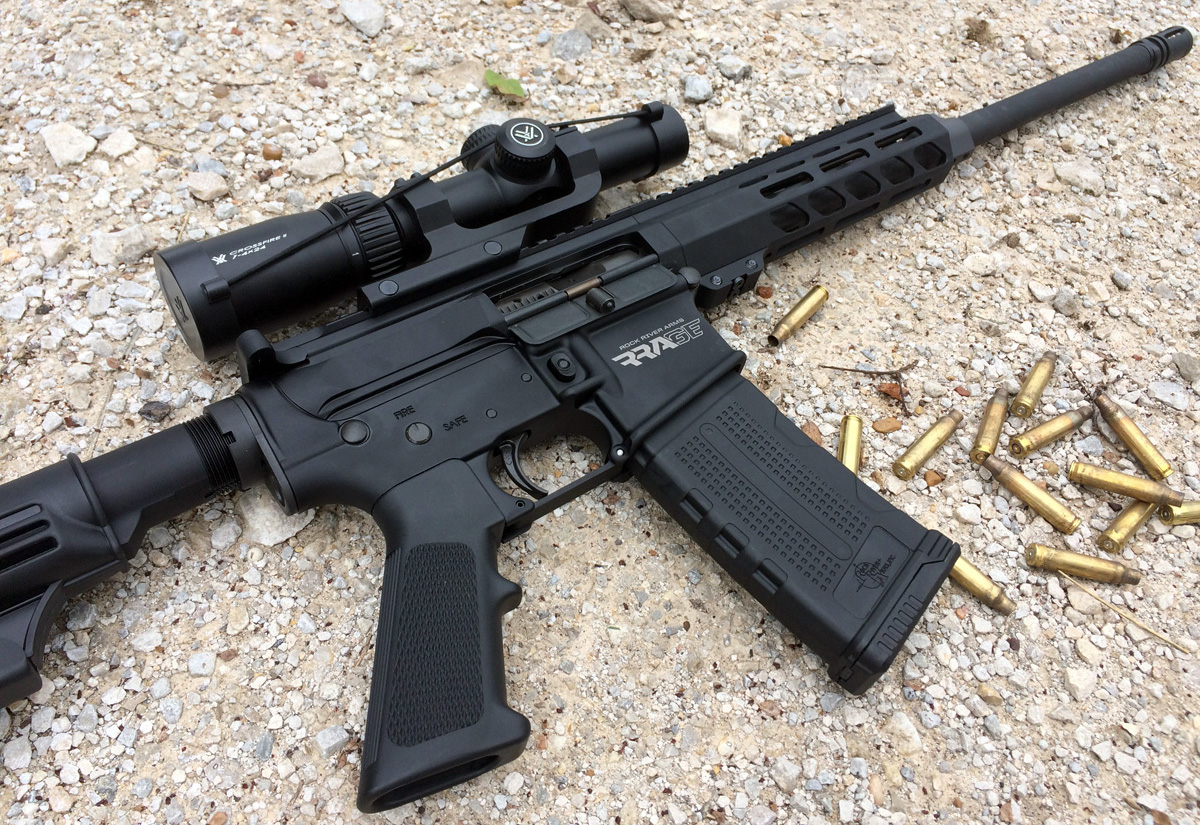 As you might expect from a company that produces firearms for the feds, these aren’t entry-level rifles. Their standard Mid-Length A4 LAR-15 runs on the business side of $1,000 MSRP, depending on the configuration.

Fortunately for those of us on a tighter budget, RRA announced this year their RRAGE Carbine, a less expensive version of their super-reliable rifles that benefits from the same quality control and attention to detail as all of their products.

Whenever a company offers a less expensive version of a usually expensive product, customers (rightly) ask, “How?”

I posed this question to Steve Mayer, one of RRA’s lead product developers, who kindly gave me a half-hour of his day to get into the weeds on the RRAGE.

Mayer explained that RRA’s forte has always been custom, made-to-order rifles, but they wanted to take advantage of economy of scale to offer customers a more entry-level option. They manufacture the RRAGE in 150-200-rifle batches, which allows them to cut machining and labor costs.

He also noted that the upper receiver is constructed from 6061 aluminum rather than 7075 T6 aluminum. The former, cheaper kind of aluminum is usually used for accessories, but after testing, RRA determined that it could also be used for an upper receiver without any negative consequences. 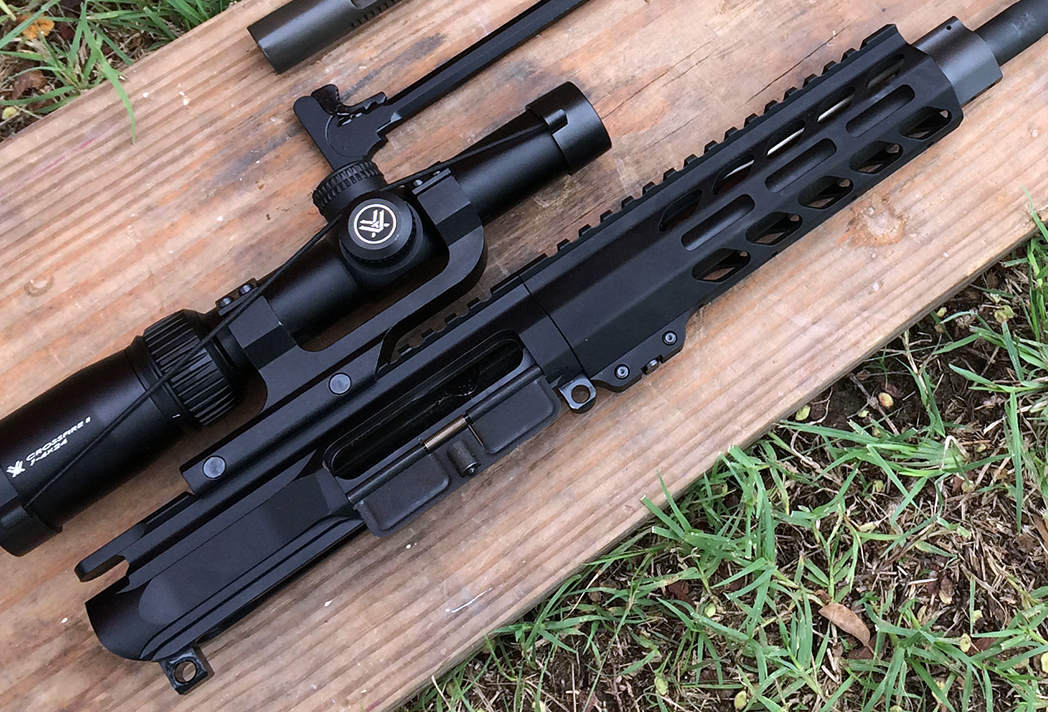 Both the upper and handguard are constructed from 6061 aluminum.

“The upper is pretty much just a conveyance. It’s something for the carrier group to move back and forth in. The barrel sees all of the stresses,” he explained. “When the steel of the bolt rotates into the barrel extension, there’s no stress [on the receiver] in that action.”

RRA saves additional cost by using a production method called “extrusion” to construct the upper receiver. Extrusion, Mayers explained, offers similar durability as forging or billeting but saves on labor and machine costs. Rather than being hammered or carved, a block of aluminum is forced through a die that creates the desired shape. The process cannot incorporate as much detail as the other methods, but it provides high quality for lower costs.

Mayer clarified that RRA has no intention of cutting corners to offer the cheapest rifle on the market, and they still use the same barrel, bolt carrier, lower, and trigger group as their most expensive options. 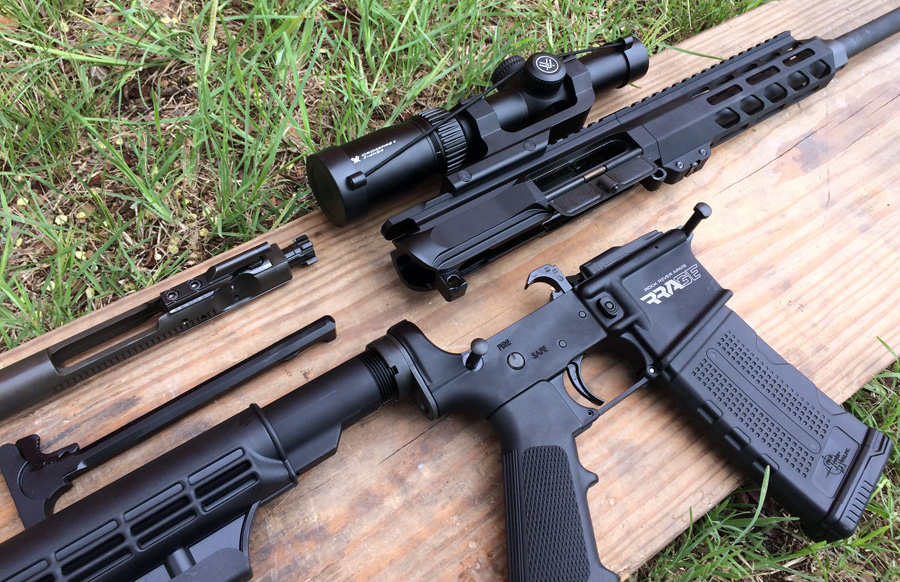 Besides the upper, RRA uses the same parts on the RRAGE as on their more premium rifles.

“The RRAGE still has most of the same components we use on our custom builds,” he said. “We don’t shortcut to put out an economy model. We have no intention of racing to the bottom. We don’t want to fight for that spot. If other people want to come in with lesser parts, then they can have that part of it.”

The result is a super-reliable, mid-level AR with clean lines and solid accuracy, to boot. 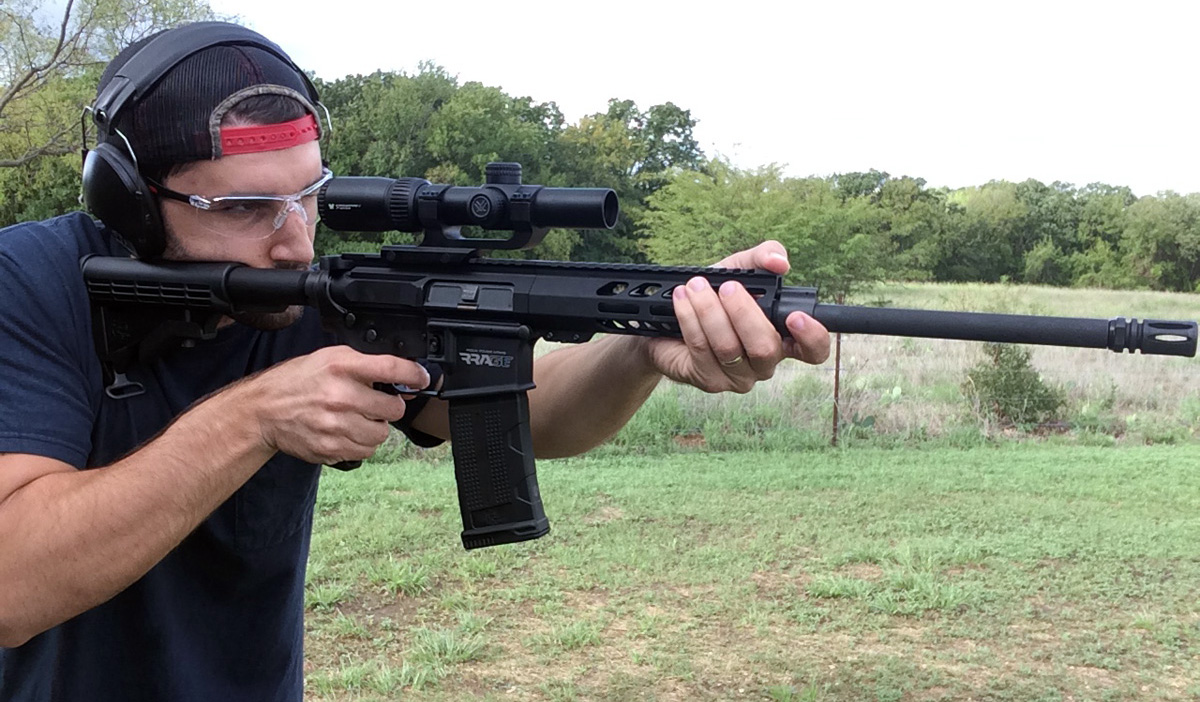 Shooting the RRAGE was a pleasure — it’s lightweight, accurate, and it handles well.

As soon as I opened the box, I was eager to get to the range with the RRAGE. Though the majority of the rifle features basic, no-nonsense components, I immediately noticed the clean lines achieved by the RRAGE’s upper receiver/handguard combo. Most budget-friendly AR-style rifles use a standard receiver with a rounded or squared handguard, creating a small snagable space on either side of the receiver. RRA avoided this problem by manufacturing their receiver and handguard to match, which provides many of the benefits of a monolithic design without the added cost. 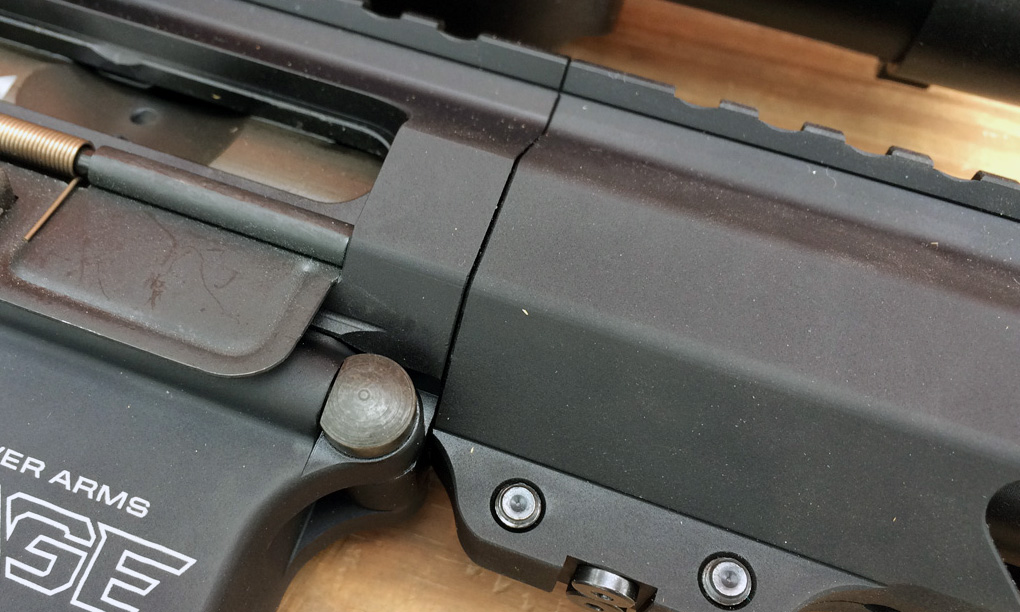 The RRAGE features a matched receiver/handguard, which gives the rifle a monolithic look without the monolithic price.

Beyond this, the RRAGE doesn’t come with any bells and whistles. It uses the same high-quality parts RRA features on their other rifles, but the muzzle device, pistol grip, stock, and trigger are all pretty basic. 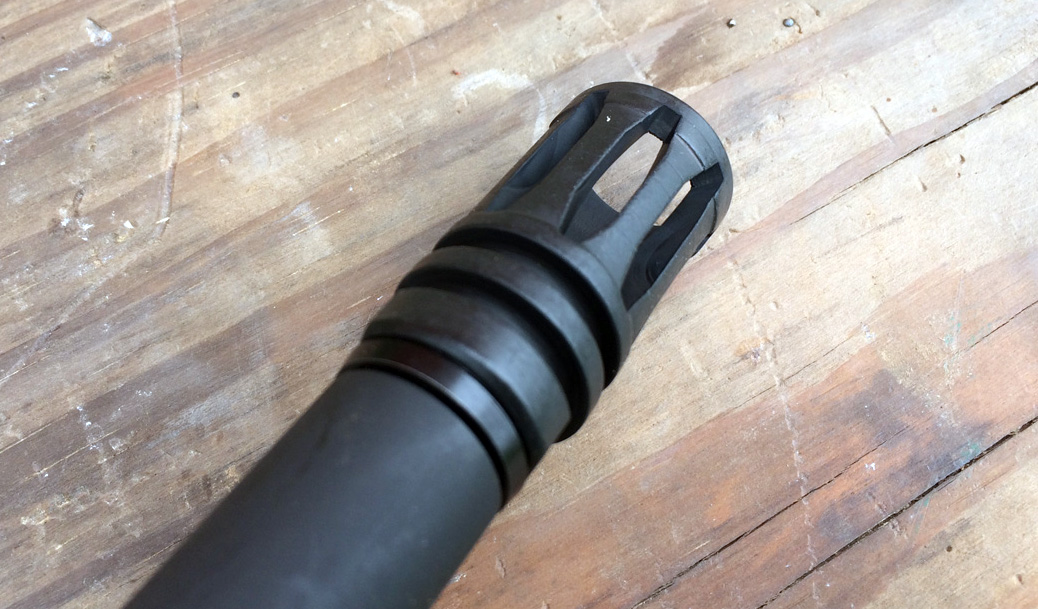 Muzzle device is the standard birdcage. 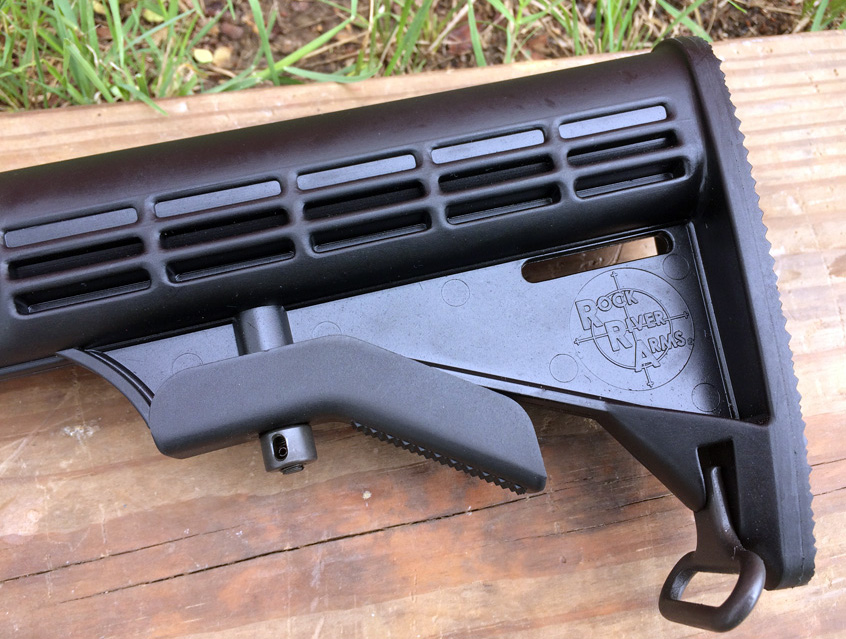 The stock is an RRA-branded model with a sling loop. 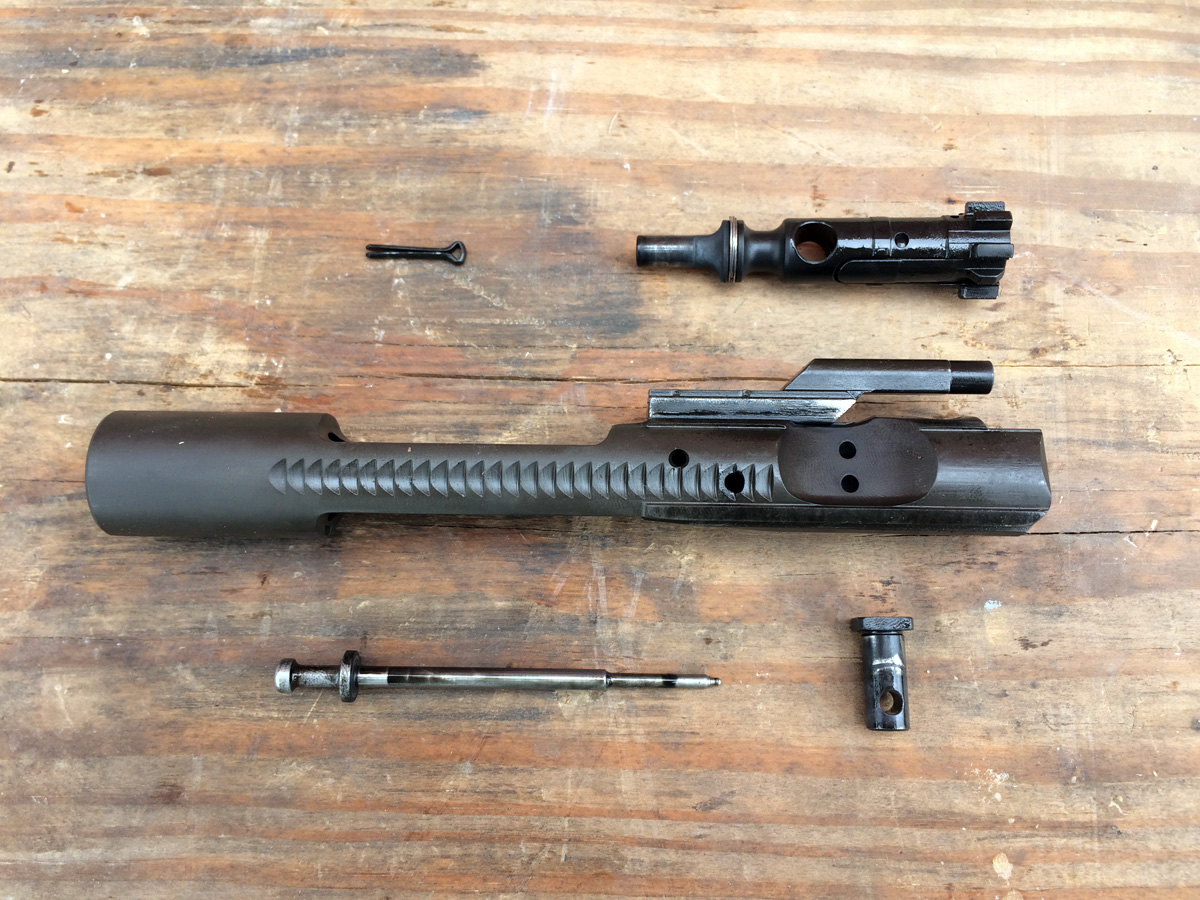 RRA uses the same bolt and carrier they use on their more premium models.

Without the extras found on other rifles, and at a slightly higher price point than a bargain bin AR, I expected the RRAGE to do two things: function flawlessly and produce acceptable accuracy.

The rifle delivered on both counts.

First, reliability. I used four different varieties of .223 and 5.56 throughout the course of my testing and the rifle ate everything I fed it (even the Russian steel case stuff). I shot off-hand and while standing, kneeling, and from prone, and I never experienced a malfunction. I also shot strings of rapid fire without a hiccup. There isn’t much else to say. The RRAGE rifle has obviously benefitted from over two decades of gunsmithing experience at RRA, and users can be confident it’ll go bang every time.

I conducted accuracy testing from the prone using a Caldwell Lead Sled. I mounted a Vortex Crossfire II 1-4x scope and took aim from 100 yards. The trigger is fine, but nothing to write home about. It weighs in at a hefty 7.5-8 pounds, breaks cleanly after some takeup, and resets audibly. 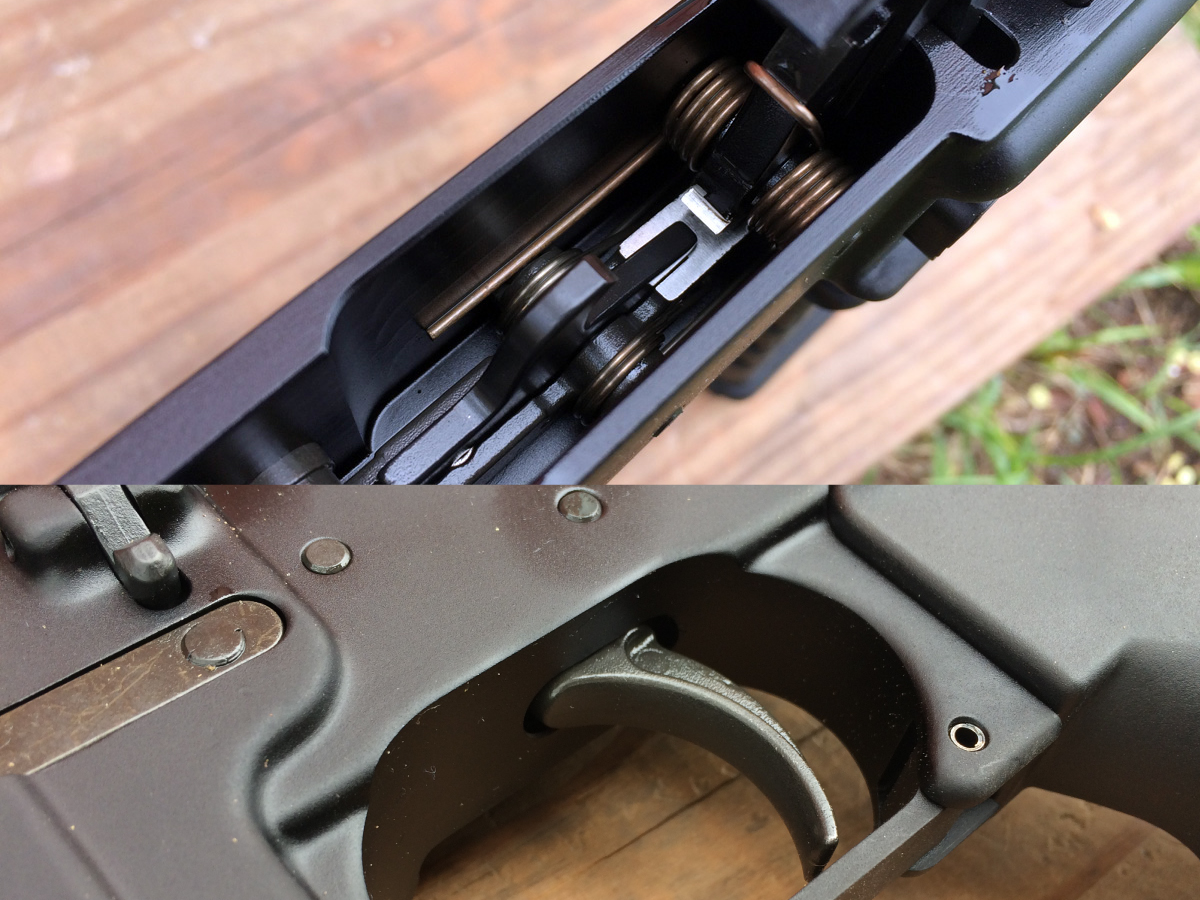 The trigger is the standard, single-stage RRA unit.

I chose four different varieties of ammunition, all of which used projectiles under 62 grains. Mayers told me that you might be able to get away with a 67 or 68-grain bullet (depending on bullet shape), but a 62-grain round is about the heaviest the 1:9 twist barrel can stabilize. 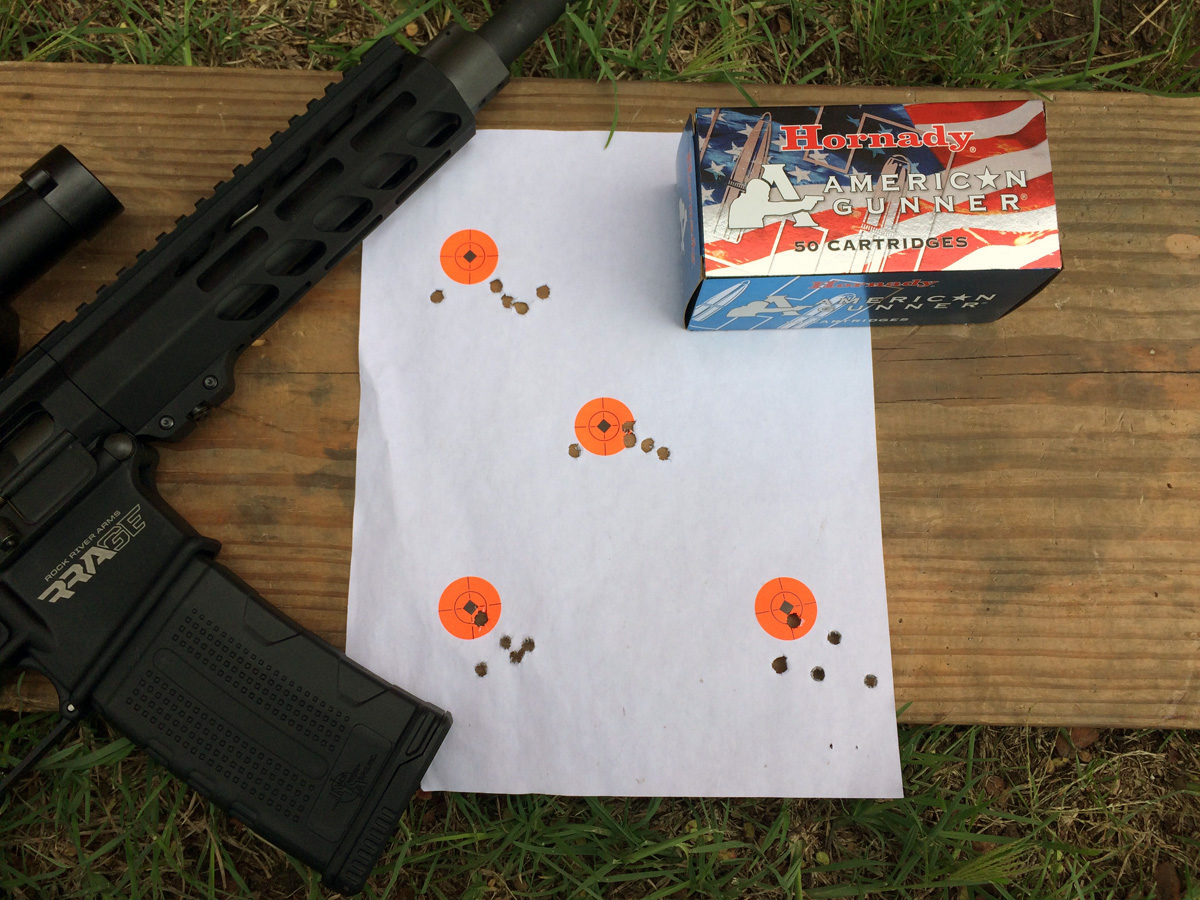 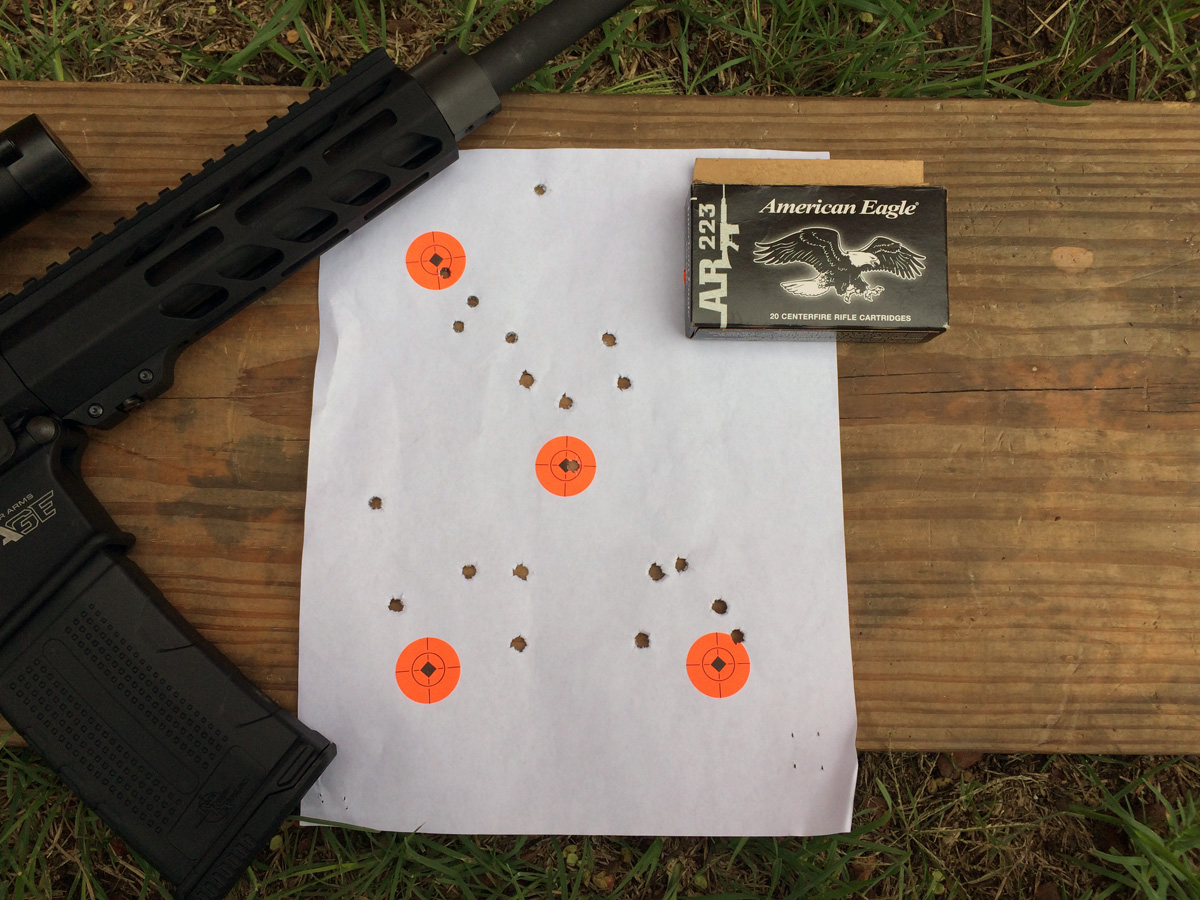 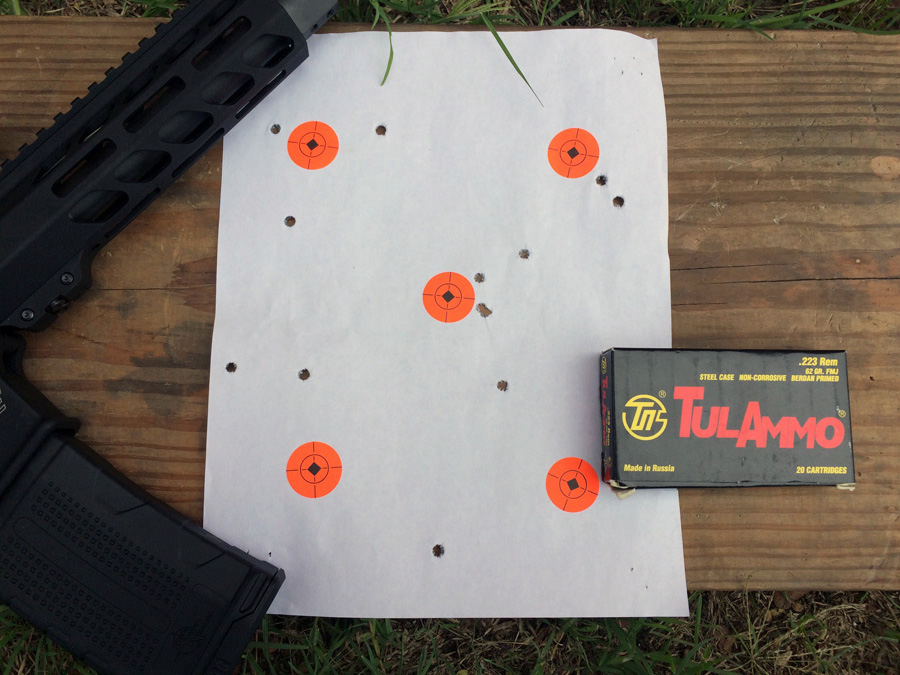 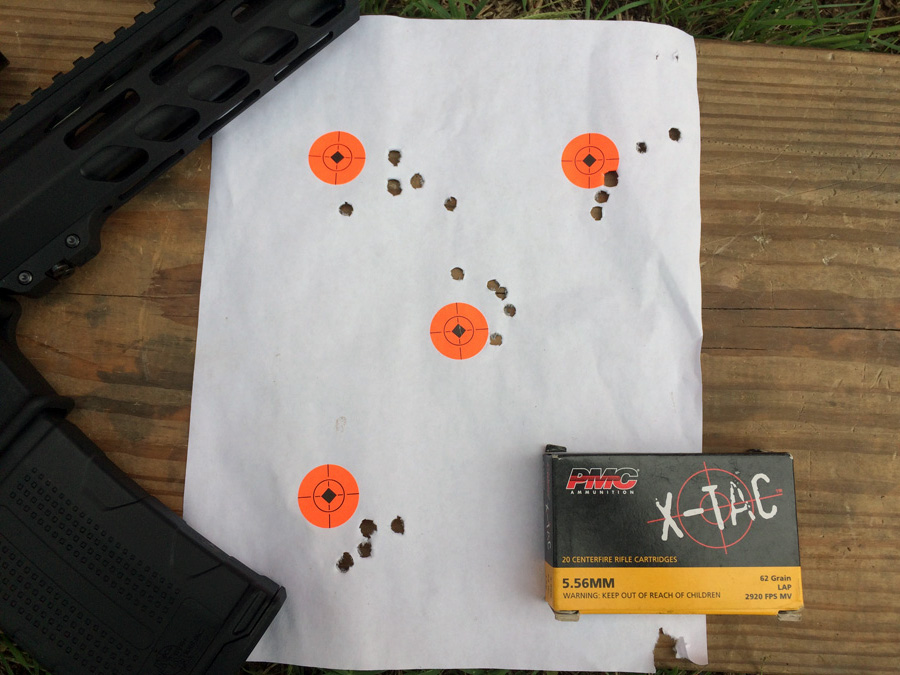 As with all rifles, accuracy fluctuated based on ammunition. The cheaper American Eagle performed more poorly than the higher-quality Hornady American Gunner and PMC X-TAC, and the TulAmmo performed so terribly I couldn’t even record group sizes.

Still, I wouldn’t call any of these cartridges top-of-the-line, so I was pleased with the groups from Hornady and PMC. That 55g HP shows promise, and if I wanted to develop a load for this gun, I’d start there. There’s some debate about how to interpret lone “flyers” that depart from a four-shot cluster, but discounting the two shots to the left of center in the uppermost targets shrinks the average to under one inch.

I was even more impressed with how the rifle responded to my next test. I dumped a few mags to heat the lightweight barrel and shot another group with the Hornady 55g loads. 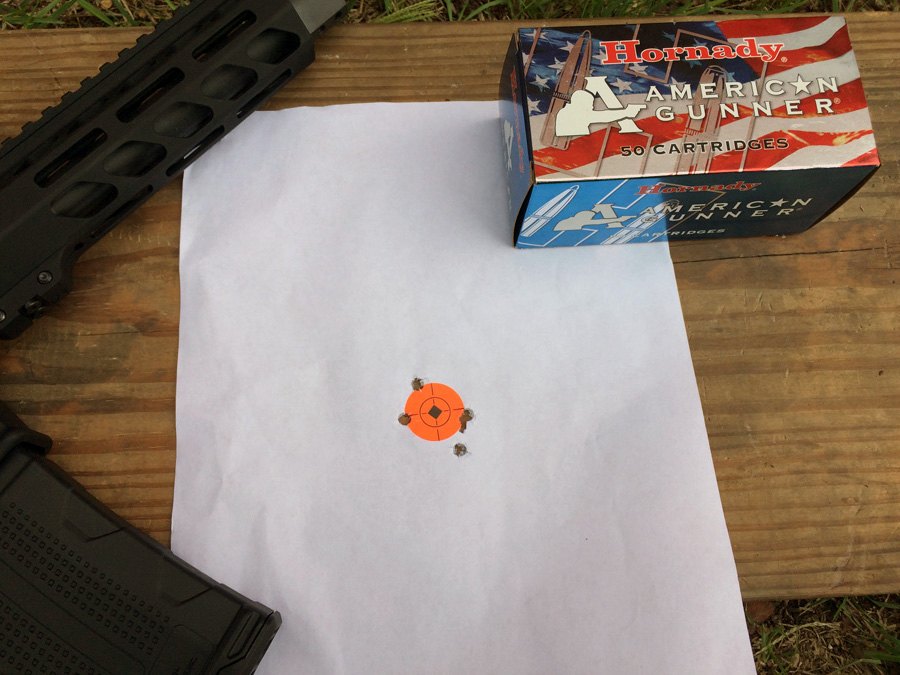 The point of impact may have shifted slightly but shot-to-shot consistency remained the same. I take this as a testament to the quality of RRA’s rifle components. My other budget-friendly ARs (so, all my ARs), lose their consistency when the barrel begins to heat up. Group sizes open up, and I lose confidence in my ability to hit my target. With the RRAGE, I know that even after a long day at the range, I won’t have to worry about the rifle’s accuracy. I can focus on doing my job and let the gun do the rest. 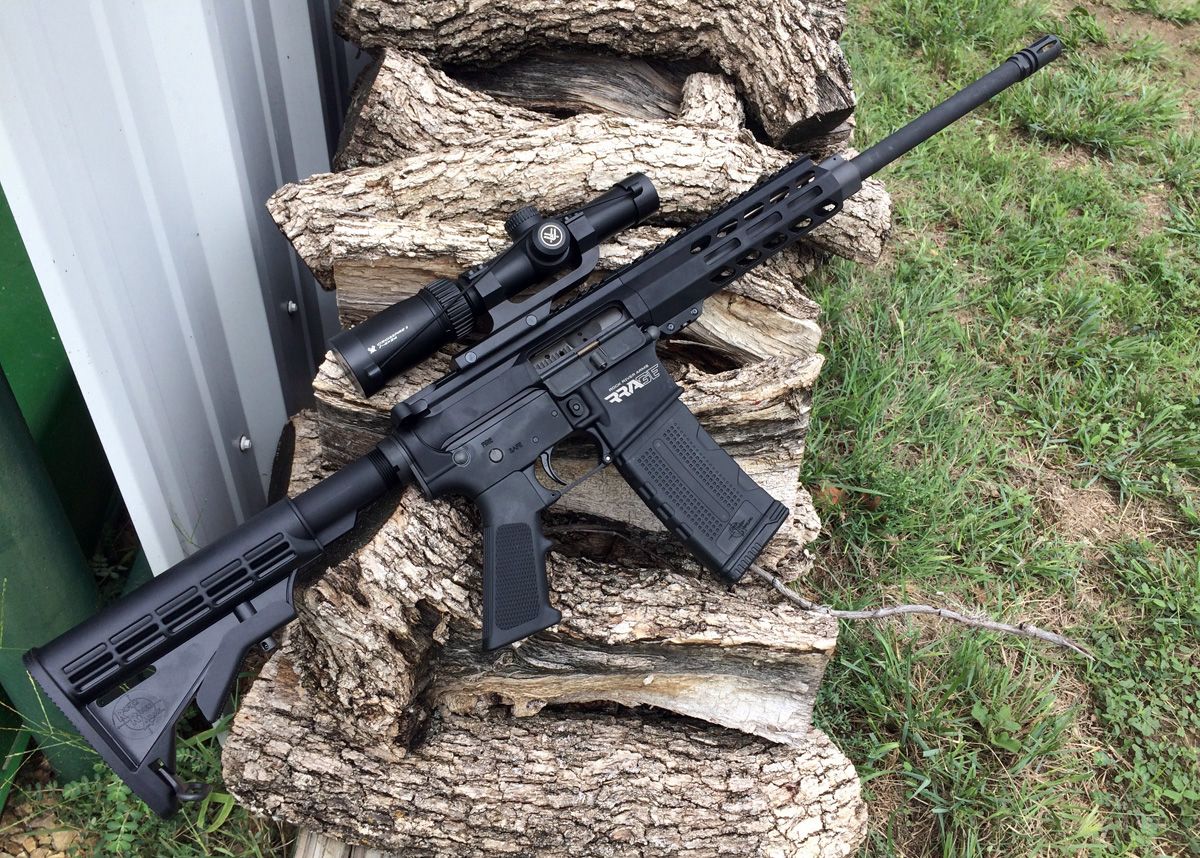 You’ll have to weigh the costs and benefits yourself, but I’m always on the lookout for firearms that check all the boxes without breaking the bank. The RRAGE does that. It’s manufactured by a company with an excellent reputation and a track record to back it up. It’s lightweight, well-built, and accurate enough to get the job done. Plus, I know it’ll last for years to come, which is a consideration given the state of politics in this country.

Bottom line: if you can find a good deal, I wouldn’t hesitate to snag one of these, get out to the range, and have some fun.

Next post: Man Shoots, Kills Machete-Wielding Neighbor Who Broke into His Home

Previous post: For Waistband or Nightstand – The Double Duty AM2 9mm From Diamondback Firearms