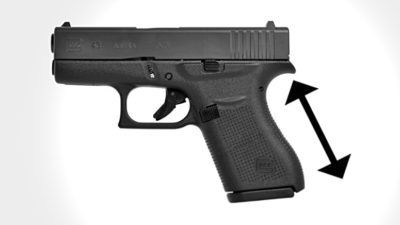 Glock may heat up the already bustling concealed-carry market with a larger G43 with a 10+1 capacity. This is a mockup of what that might look like from the side.

Rumor has it that Glock’s big reveal for 2019 is a new pistol for the concealed-carry market. If true, it means that the Glock 43 is getting a bigger sibling, the Glock 43X.

Supposedly the major change is to the grip frame. By lengthening it and making it a little wider, Glock can pack a 10-round magazine into a package not that much larger than their first single-stack 9mm model.

“Compared to the dimensions of the G43, the G43X grip is ‘4mm wider and 15mm longer than a G43’ to accommodate its new 10-round magazine,” said Rob Curtis.

By using a tapered, semi-staggered-stack magazine, this seems more than reasonable. It may even be possible for the new frame to fit in existing holsters, but that could be wishful thinking, too.

Right now this is all speculation, but there’s a growing trend for higher-capacity handguns designed for concealed-carry. This is true for both commercial and police markets.

SIG Sauer effectively created a new category of carry pistol a year ago when they announced the P365. Partly single-stack and partly sub-compact, they invented the “micro-compact” with a stepped magazine.

Magazines like these are long enough to provide a full-handed grip but thin enough to conceal easily, and they offer a round count advantage over single-stack mags. This also lets manufacturers go with slimmer slide assemblies and thin or flush controls.

Such a gun would be a little heavier than a Glock 43, at 16 ounces unloaded, but likely lighter than a Glock 26 which weighs  3 ounces more. Add ammo and a magazine and that makes even more of a difference.

But the real advantage is ergonomics. Adding a longer grip is better when shooting, especially with minimal bulk and with less bulge. Short double-stack grips may have the same or slightly higher capacity, but they can be hard to shoot since they’re simply cut-down versions of full-size guns.

It’s hard to deny that guns purposefully designed for concealed-carry have advantages over guns designed for duty and home defense when it comes to every day discreet carry. If this rumor pans out, Glock is likely to sell a lot of these, and not just to Glock fans.