I spent a good deal of time looking for a “youth” rifle for my son’s 8th birthday. I knew I wanted a single shot .22 LR rifle, but beyond that wasn’t really sure what I was looking for. While there are a fair amount of youth rifles on the market (categorized by a short length of pull), as I started to create some criteria for myself, the number rapidly shrank.

What was I looking for in a “youth” rifle? My number one consideration was weight. While a lot of rifles are marketed as rifles for young shooters to learn on, a lot of them are “adult” rifles with a couple inches hacked off the stock and barrel. While this technically makes the rifle lighter, it can still be overly heavy and unwieldy for little humans.

An example of this is the CZ 455 Scout. I admittedly love the little rifle myself, but it weighs far too much—around 5+lbs. “Only 5 pounds,” you say? Think about it like this. If I weighed around 55 lbs., that rifle would roughly weigh 10% of my body weight. As a 180 lb. adult, it would be like me carrying around an 18 lb. rifle. While I could do it, that is not what I want to lug around, let alone try and shoot offhand. 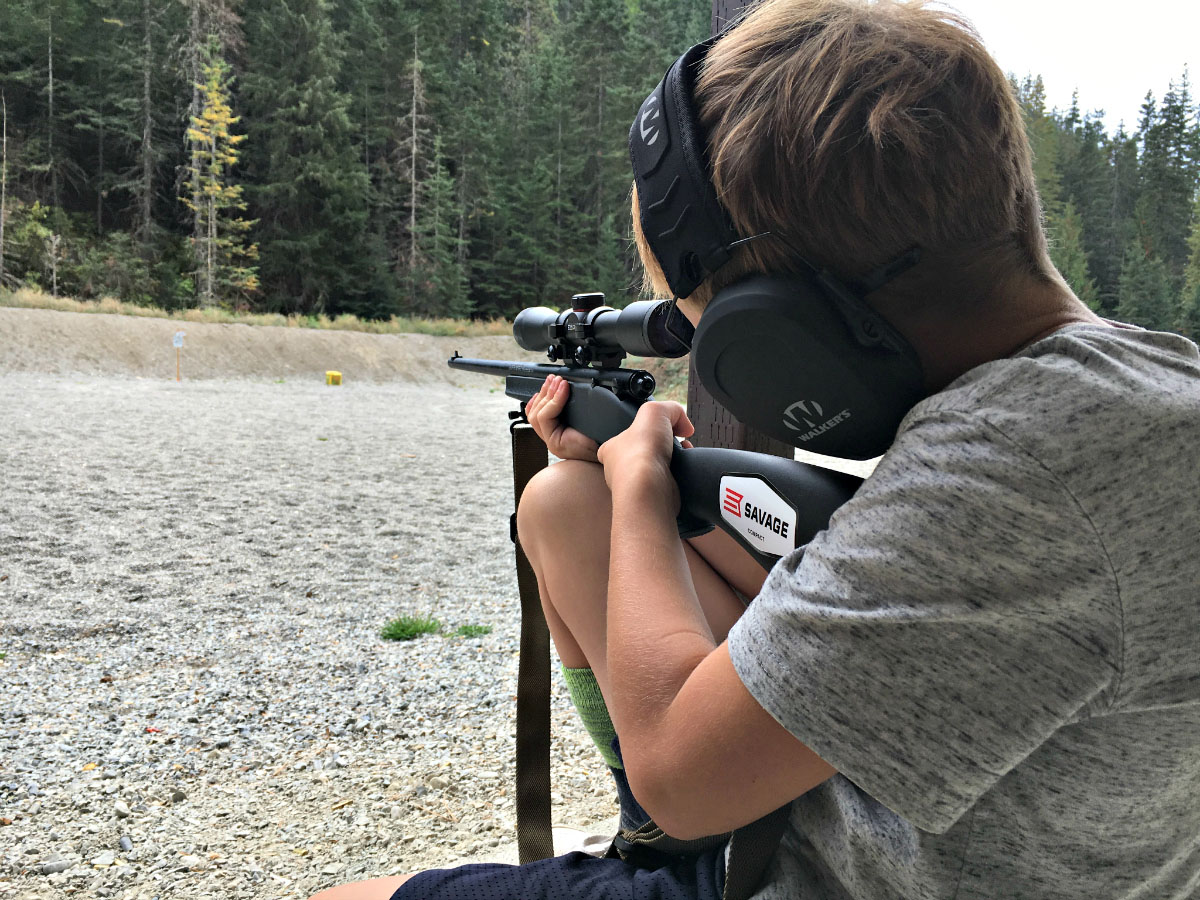 Due to the light weight of the Rascal, it is easy for kids to manipulate the rifle into different shooting positions.

The other criteria I had was for the rifle was for it to have a rear peep sight. While a number of youth rifles or .22 LR’s, in general, have rear leaf sights, I can’t stand them. Comparatively they are difficult to use and don’t translate, in my mind, to standard rifles. Keep in mind I cut my teeth shooting the M16A2 in the Marine Corps. All military rifles have rear peep sights for a reason… 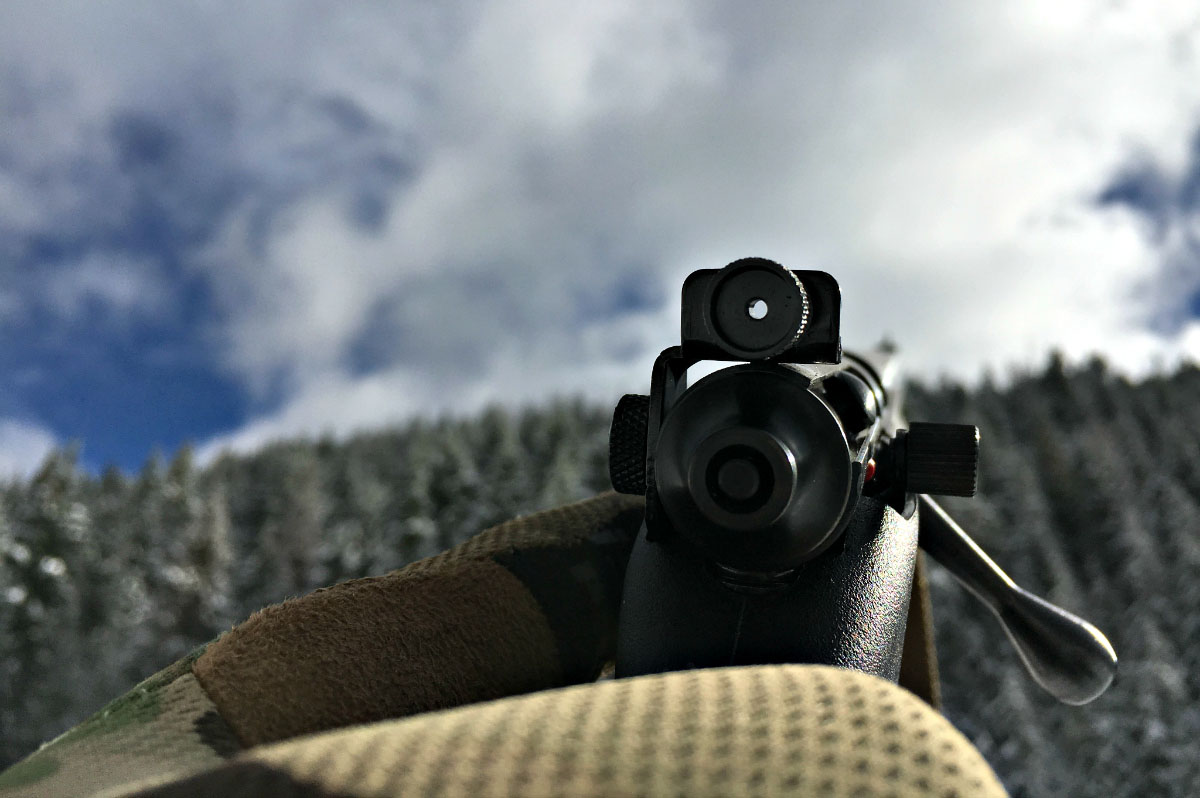 While the rear peep sight is adjustable, my son’s rifle had a hard time holding a zero.

I also wanted a youth rifle that had transferable skills. What do I mean by this? Well, just like a rear peep sight which modern rifles are equipped with, I didn’t want the manual of arms to differ from rifles my sons would eventually use with respect to bolt actions. Most notably on youth rifles, there is a number that use a plunger style action. This requires the shooter to pull back a plunger on the rear of the bolt in order to cock the rifle. While you could make an argument for an exposed hammer, I have yet to see or have any experience with a rifle utilizing a plunger, outside of some youth .22s. 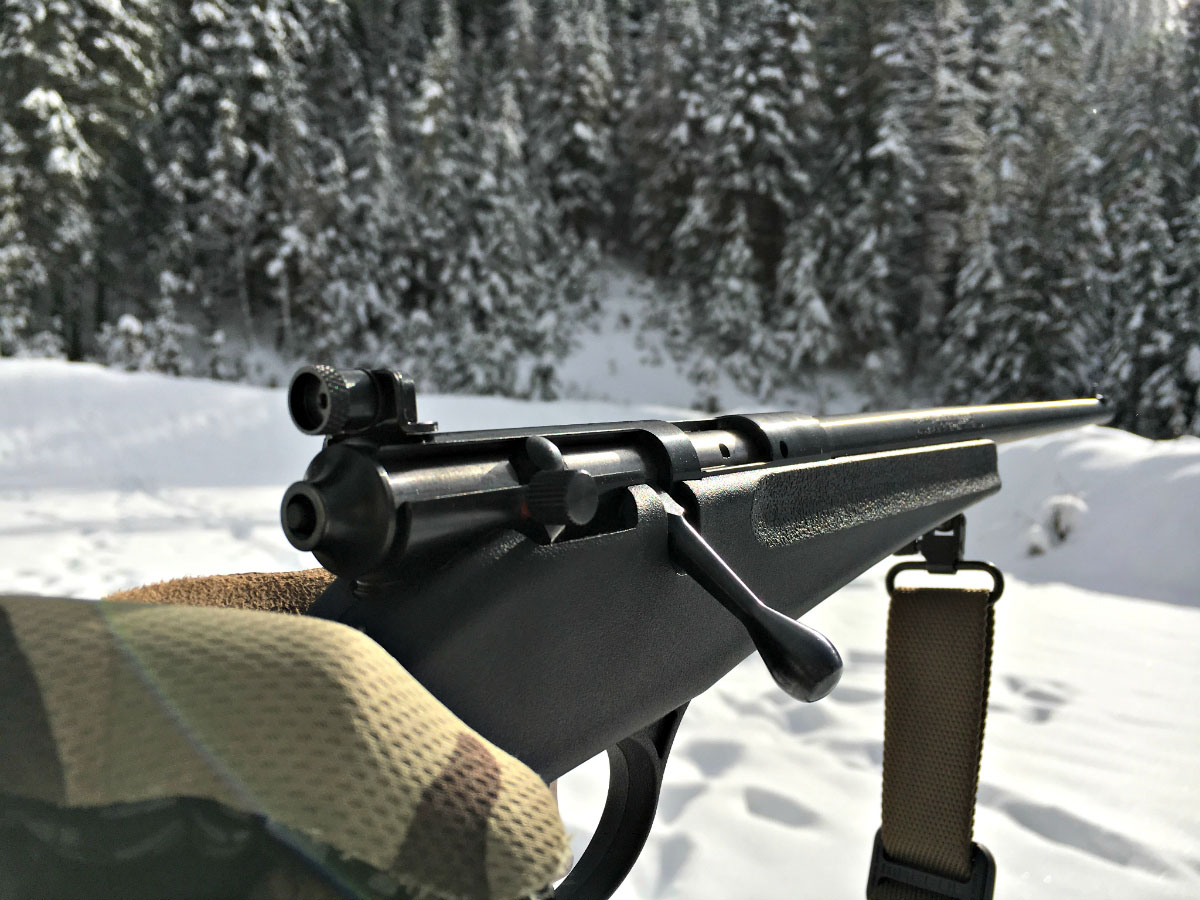 The Rascal is cocked by raising the bolt rather than any type of plunger on the back of the bolt.

So armed with my criteria of a .22 rifle that was lightweight, had a rear peep sight and didn’t require some unusual manual of arms, I settled on the Savage Rascal.

The Savage Rascal is a single shot that just has a small red plastic feed ramp, loaded from the top one round at a time. This setup versus a magazine-fed rifle forces the shooter to slow down and make the one shot count. I should add that since you’re dropping one round onto the feed ramp, it can sometimes wander and get hung up when you try to chamber it. This isn’t a problem and easily remedied, even by kids. 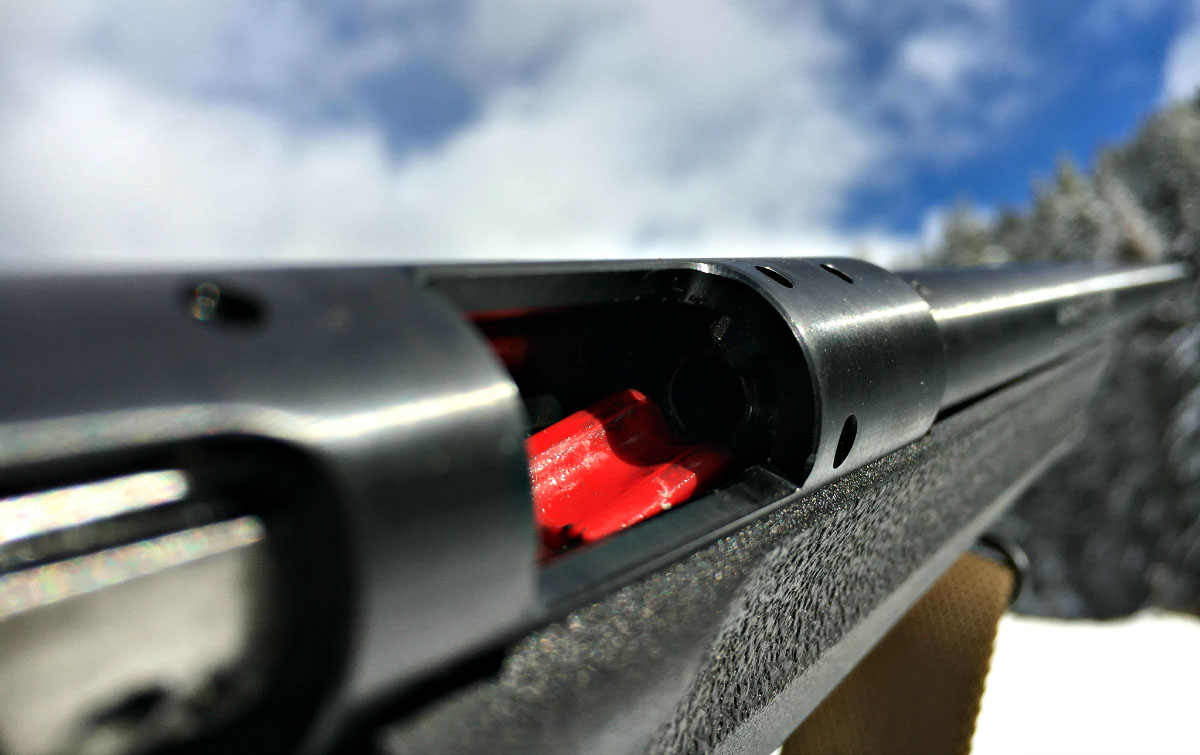 The red feed ramp does a decent job of helping the rounds into the chamber.

To the end of weight, the Rascal is light. Not only is it sized appropriately for length of pull, but it is an appropriate weight for a young shooter. The rifles weigh a mere 2.6lbs. I know I’ve harped on weight, but think about this: When you are trying to impart skills to someone, and dealing with an object with the ability to kill or maim if mistreated, you don’t want something so heavy as to cause fatigue. Once someone fatigues, they are more preoccupied with trying to hold the damn thing up than they are with trying to listen and focus. 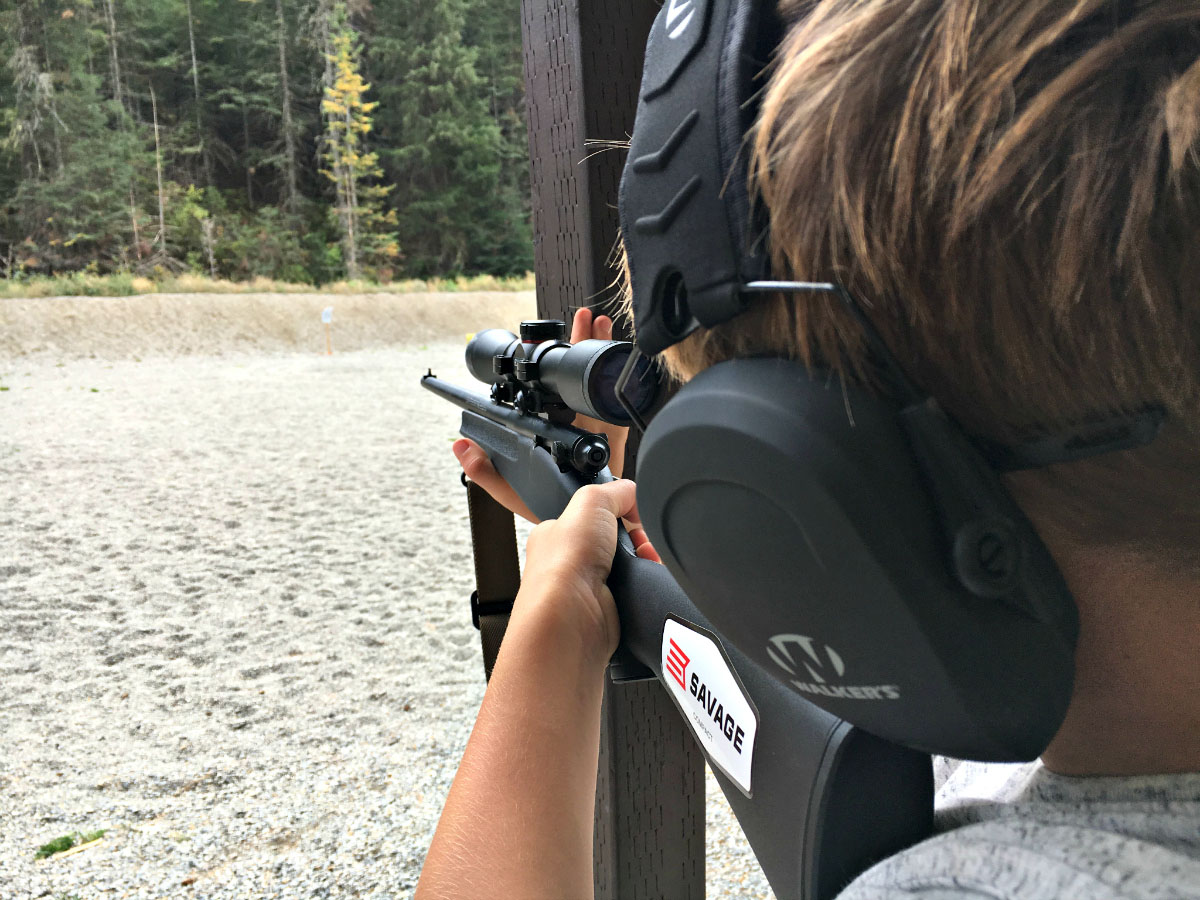 The rifle is manageable enough for my boys to work on other shooting positions without becoming immediately fatigued.

The Rascal also offers a rear peep sight. While I was grateful for that, I ended up being disappointed in the sight. For myself, on my son’s rifle (sample size of one) I had to max out the windage and just about bottom out the elevation to get the rifle zeroed. Additionally, the elevation, even when cranked down, wasn’t very secure and would move if bumped. I’ve spoken to a friend of mine who purchased one for his daughter, and he has had none of the same problems. More on this later.

The Savage Rascal also has a transferable manual of arms. When the bolt is raised, the rifle cocks itself. No need to pull any plunger. Additionally, the safety, while located in the place on the rifle like a Remington or CZ, is moved from the safe position (to the rear) to the fire position (forward).

The Rascal also comes with a few bonuses in my mind. While some adult rifles don’t allow for it, you can operate the bolt when the rifle is on safe. I feel this is especially important for young shooters, should they need to remove a live round from their rifle. Also, even though the Rascal is a youth rifle, it comes standard with the adjustable Savage Accutrigger. 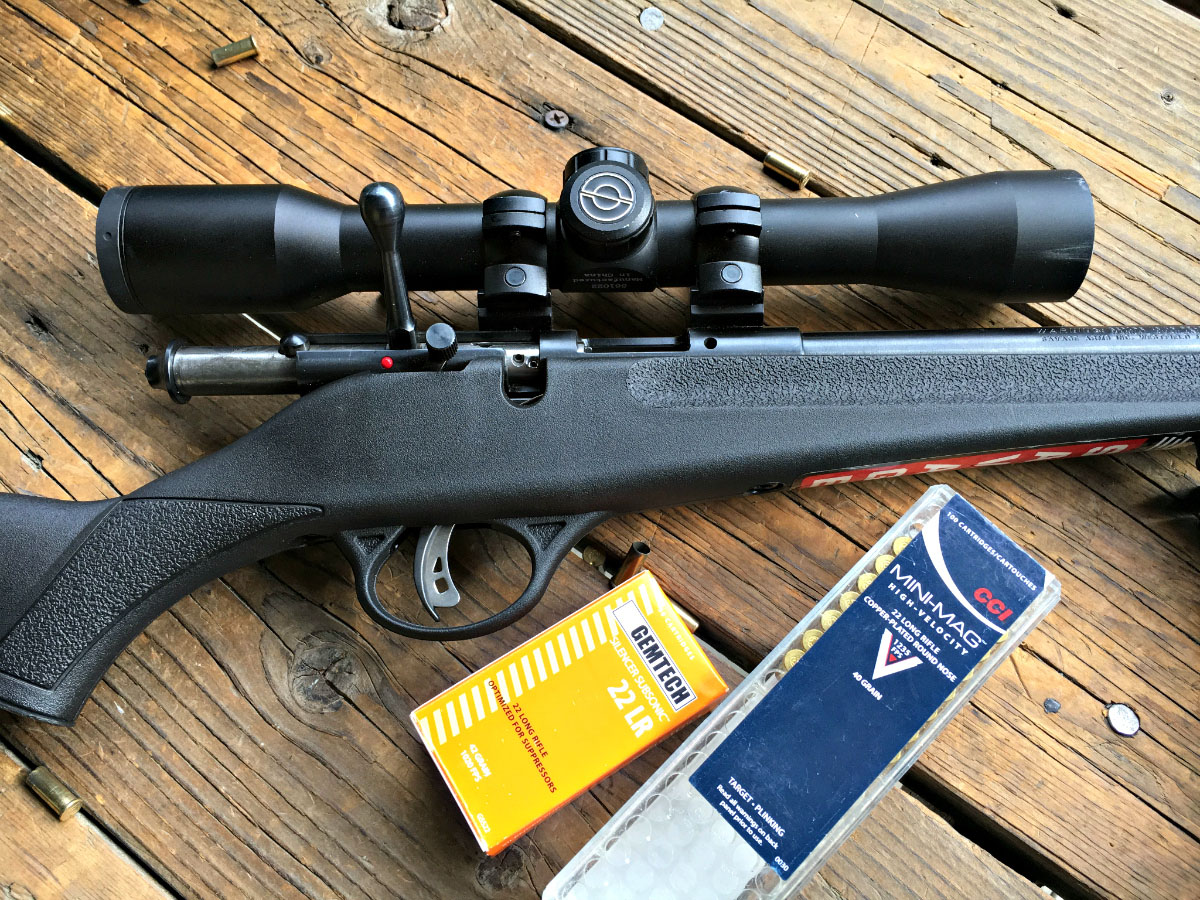 While the trigger is adjustable, I’ve kept it at the factory setting.

So how does the rifle shoot? As I mentioned earlier, the stock sights on my son’s particular rifle left something to be desired. I was only able to hold fist-sized groups at 25 yards. Disappointing. But fortunately, the problem with the sights (and accuracy) was rapidly solved by my son.

When he received the rifle he told me he wanted a “sniper scope” on it. I told him he would need to demonstrate that he could use peep sights before I would put a scope on the rifle. The criteria I set for this was to put all 5 rounds on a 5”x5” steel plate at 25 yards. Too easy? Not really, I had to work to do it myself with the factory peep sights.

However, after zeroing the rifle on our first outing, he quickly got the hang of it and proved to me that he was capable of holding a group on that target. A deal is a deal. I went home and ordered a scope base, rings and Simmons fixed 4x scope from Amazon. When they arrived in the mail my son helped me in mounting the base, rings, and scope. 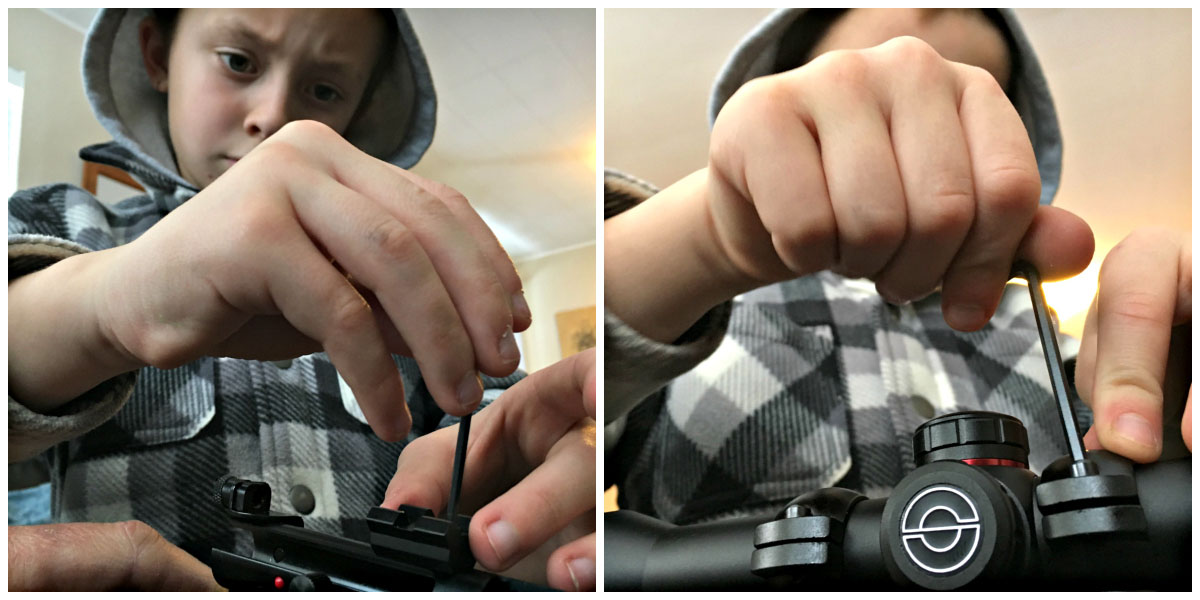 Any project you can involve kids in is fun, including mounting their own scope to their rifle.

Our next outing, after zeroing the scope, proved much better. I zeroed the rifle at 25 yards and we took turns shooting some groups. For some reason, I only shot four rounds while he shot five. He was pretty proud of his group and pointed out that I only got one round in the black while he got two rounds. He obviously won… 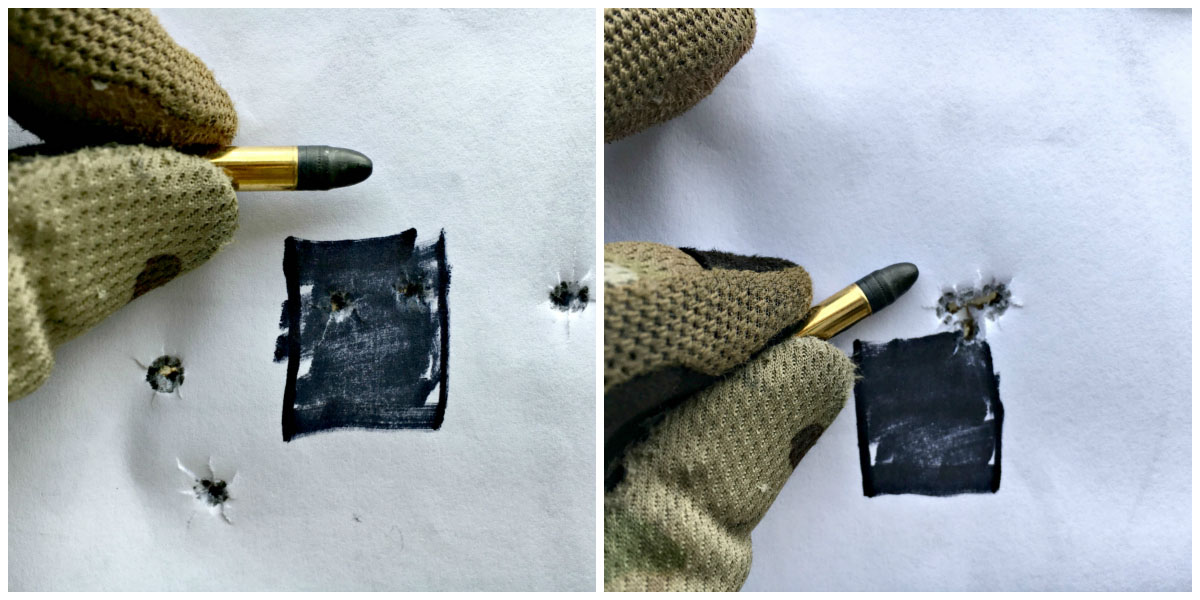 My son’s group on the left versus mine on the right. He was quick to point out that he got two rounds in the black, compared to my one.

Since then we have made a number of trips to the range as well as out into the woods looking for squirrels. The rifle has continued to do a great job for us. It is sized and weighted right. The length of pull is perfect for young shooters (and frankly, uncomfortable for adults). The weight is light enough for him to safely shoot offhand without fatiguing prematurely. He can also carry it on hikes into the woods without it being burdensome.

All the groups I’ve shot have been at 25 yards. How does it perform further out? I’m not sure, and as a youth rifle, it doesn’t matter to me. The local range is full of 25-yard pistol bays so that is where we spend our time, or out in the woods. And as far as my son wanting to hunt squirrels with it, 25 yards seems about right.

The best performing ammunition I’ve shot through it has been the Gemtech 42grain Subsonic. Measuring a little under .5” at 25 yards. I’ve also shot the CCI Mini-Mag 40grain to good effect, holding about the same group size. What hasn’t done well for me is the Winchester copper plated 36grain hollow points. Not only did it not group well for me, but they occasionally would get stuck in the chamber. I think it has to do with a coating that is on them. *This can be remedied by putting pressure with a finger on the extractor while pulling the bolt rearward.* 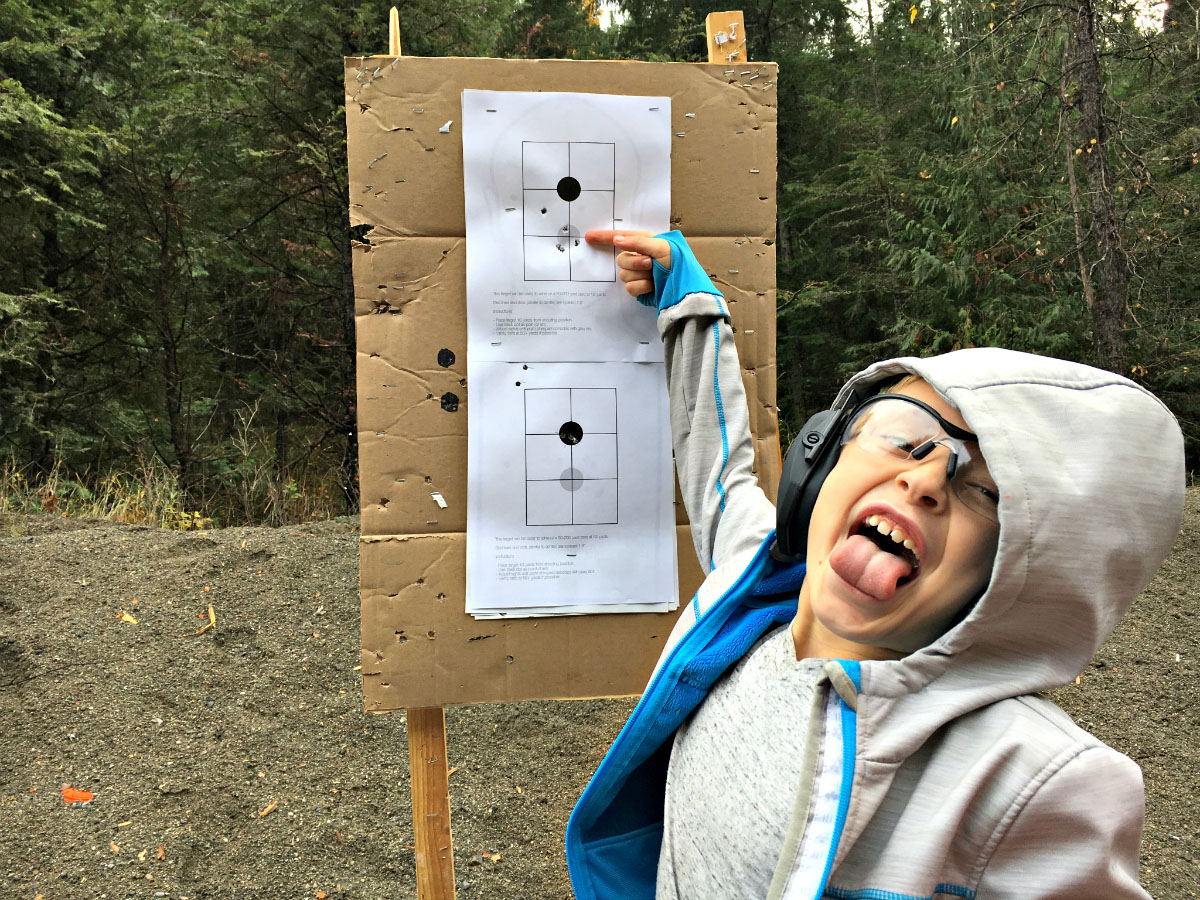 My oldest son’s best group of the day. 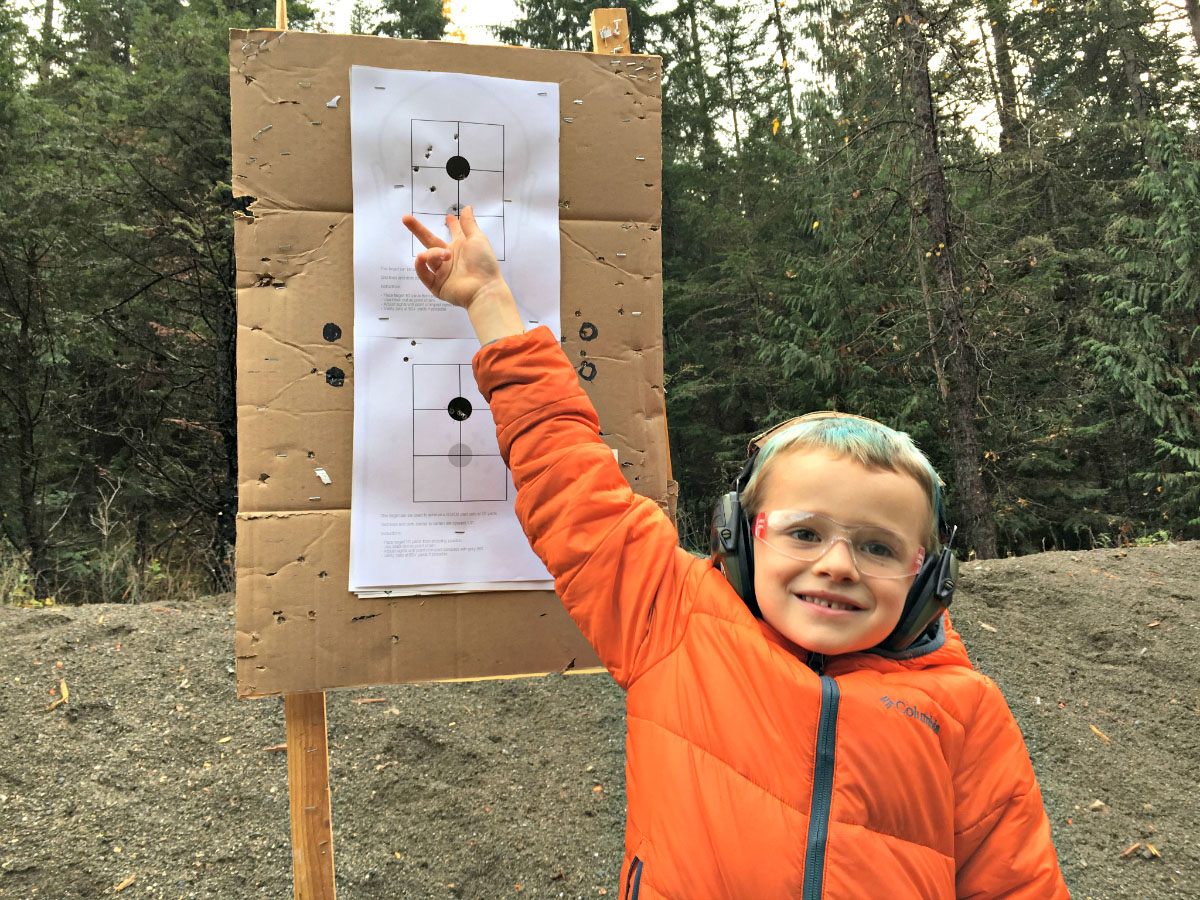 My youngest son’s best group of the day. 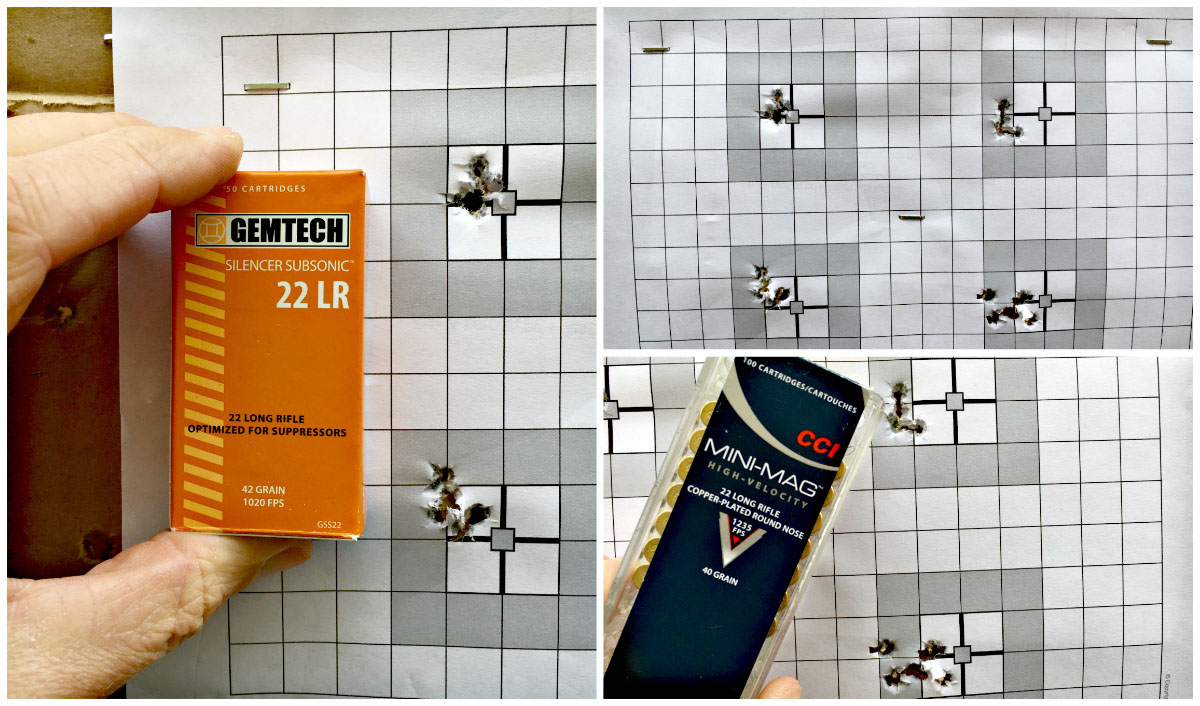 Both of those ammo’s performed well for me at 25 yards.

A complaint I’ve heard on the rifle is that kids will grow out of it in 2 years and then never use it again because it is too small. This is true, give or take a year or so. I would love for Savage to make a drop in adult sized stock for the Rascal so that it can continue to see use as the shooter grows. However, for around $150, even if only used for two years, I find it absolutely worth it. It provides an appropriately sized and functioning rifle for kids to learn how to safely handle firearms. Worth every penny.

If you are looking for a .22 rifle to get a young shooter started on, give a hard look at the Savage Rascal. 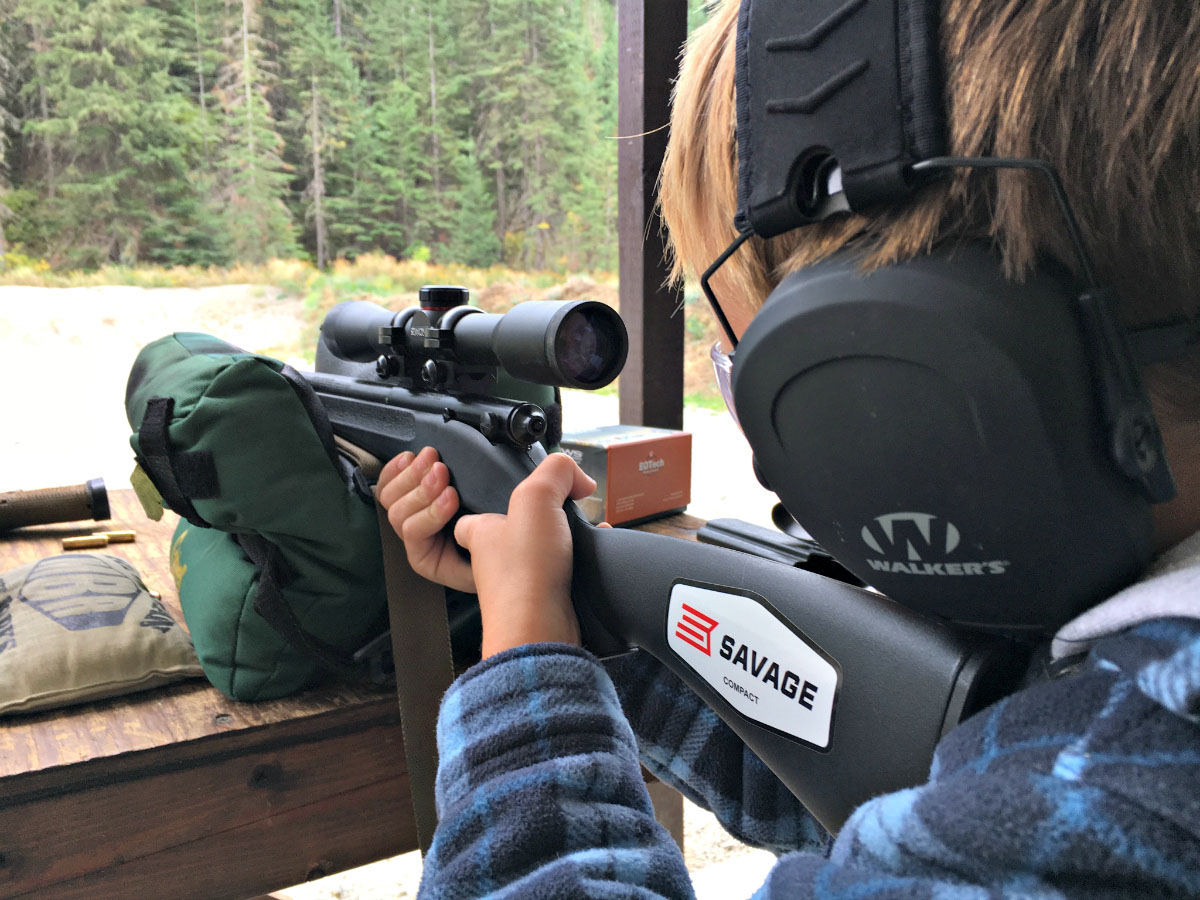 The Savage Rascal is a great youth .22 that can lay the foundation for safe weapon handling skills.

***Shop GunsAmerica for your next Savage rifle***

Next post: Maximize Your Accuracy with the RCBS Competition Die Set