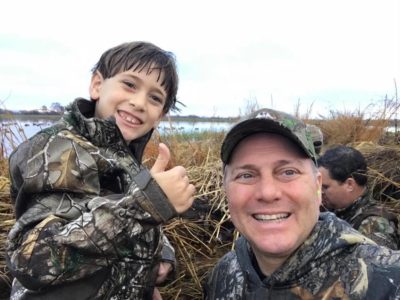 Steve Scalise says he’s still pro-Second Amendment despite being targeted for his political beliefs in a violent shooting. (Photo: Scalise)

House Majority Whip Steve Scalise (R-LA) was all about the Second Amendment before he was shot last year. Today he’s still all about the right to keep and bear arms.

That’s what Scalise said on television during an interview with a “surprised” Whoopi Goldberg. She said he doesn’t “have an idea that there may be some more gun control that we need to work on with stuff like this.”

Scalise was one of many Republicans targeted at the 2017 Congressional baseball practice shooting. He told her that he’s gotten that question a lot since and that his stance remains unwavering.

“Three and a half months later I came back to Congress and got to get back to work again and I had people that would ask me, ‘You know so are your views different on gun control?'”

“I’ve got deep-rooted conservative beliefs but they’re rooted in what the fundamental foundation of this country is based on,” said Scalise.

“I mean, when the Constitution was written initially they didn’t have a protection for guns because our founders just thought it was an assumed right,” said Scalise. “Later they added it in the Bill of Rights as the Second Amendment [because] they felt very strongly that every American has the right to defend themselves.”

Rep. @SteveScalise explains why his views on gun control have not changed since he was shot last year: “I’ve got deep-rooted conservative beliefs, but they’re rooted in what the fundamental foundation of this country is based on.” https://t.co/f8u2wc159S pic.twitter.com/OHNwka2za3

“There are bad people out there you know whether they have guns or knives or bombs, [and] there are a lot of laws on the books,” he continued. “If somebody goes and uses a gun to commit a crime they’ve broken a series of laws to get there … so let’s enforce the laws better.”

Scalise said that people need to treat violence as a health issue in addition to enforcing existing gun control.

“There’s usually a common thread in a lot of these shooters that there are mental health issues,” said Scalise. “We just passed new laws, and they were very bipartisan so they didn’t get a lot of attention, but laws that help close a lot of those loopholes and coordinate a lot of the mental health problems in this country so that if somebody does have serious mental illness they’re going to be taken care of in a better way.”

He affirmed his position by citing the landmark Heller decision, which holds that people have a fundamental right to own guns for lawful purposes including self-defense.

“The Supreme Court, by the way, answered this question a few years ago,” said Scalise. “It was a 5-4 decision – which is concerning, it should’ve been a 9-0 decision – but the Supreme Court said very clearly that you can own a gun not just as a member of the military but also individually to protect yourself … that is the true meaning of the Second Amendment.”