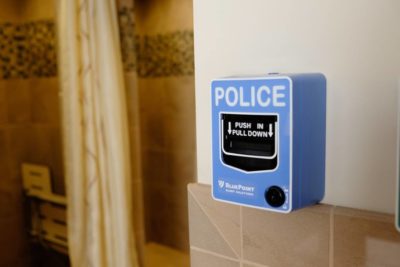 The BluePoint alarm boxes resemble fire alarms and, if activated, will notify law enforcement of the emergency. (Photo: BluePoint)

Over 20 Illinois private schools have installed emergency alarms that notify police in the event of an active shooter, according to the Chicago Tribune. The blue boxes were installed over the summer as parents and administrators worry about the mass murders that took place in Parkland and Santa Fe last year.

“[Parents] really, sadly, are aware of this possibility,” said Rachel Gemo, head of St. Benedict’s Preparatory School in Chicago’s North Side. “They are not immune to what they hear on TV.”

The system was developed by a company called BluePoint Alert Solutions and works like the fire alarm systems students are already familiar with. The light blue box is stamped with the word “Police” and includes a pull-down handle to notify authorities in case of an emergency.

Even though most teachers, administrators, and students have cell phones, BluePoint says their system saves precious seconds that might be wasted fumbling with a phone. In addition, the BluePoint system includes building alerts that notify occupants of danger.

“The faster building occupants can take preventative or defensive measures, the more likely a threat can be minimized,” the company says on its website. “Also, in a panic situation, people do not react or think as rationally as in a non-panic situation. Having to dial even three numbers and provide coherent information that can be understood by the emergency dispatch attendant takes precious seconds before first responders are dispatched to the site.”

Whether or not the system can actually save lives in a mass murder scenario, the little blue boxes have helped students and parents feel better as the new school year begins.

“I feel a lot safer than I used to,” Henry Klucznik, a 10-year-old student at St. Benedict’s, told the Tribune. He said the closest box to him during the school day is right down the hall — “two to three seconds” away if he’s running.

“With all these examples across the country, you hope and pray it doesn’t happen to you and your school,” Klucznik said. “I really hope we never have to use (the alarm system), but it’s nice to be prepared.”

Despite the media narrative, school shootings have declined since the 1990s. A study from earlier this year found that schools are safer than they were in three decades ago, and others have noted that schools are, in general, the safest place kids can be.