Long range shooting competitions, in particular, the Precision Rifle Series are the fastest growing in the shooting sports. When you combine fun, a challenging format, and friendly shooters, that is a formula for success. When I first started competing in the PRS there was one class. The shooters with 308 gas guns were up against those with custom bolt guns chambered in some hotrod, flat shooting, wind-defying 6mm or 6.5mm. If you wanted to be competitive you needed to purchase a high-end bolt gun. The price of the rifle combined with quality glass pushed the cost above $5000 on the low end.

In 2015 the PRS Board lead at that time by Shawn Wiseman created three categories for the 2016 season: Open, Tactical and Production. The rules for Production are simple. The rifle cannot exceed an MSRP of $2000 and neither can the optic. Plus, the rifle must be in the manufacturer’s original configuration. PRS created this division to help shooters get into the sport and be competitive within their division without the financial hurdles of having to purchase an expensive rifle.

Enter the Seekins Precision Havak Bravo. This is a fully custom rifle that was built for Production division and at a price that is lower than many large manufacturers off the rack rifles. Everything on this rifle was made in house at Seekins shop in Lewiston, ID, minus the trigger, chassis, and barrel. 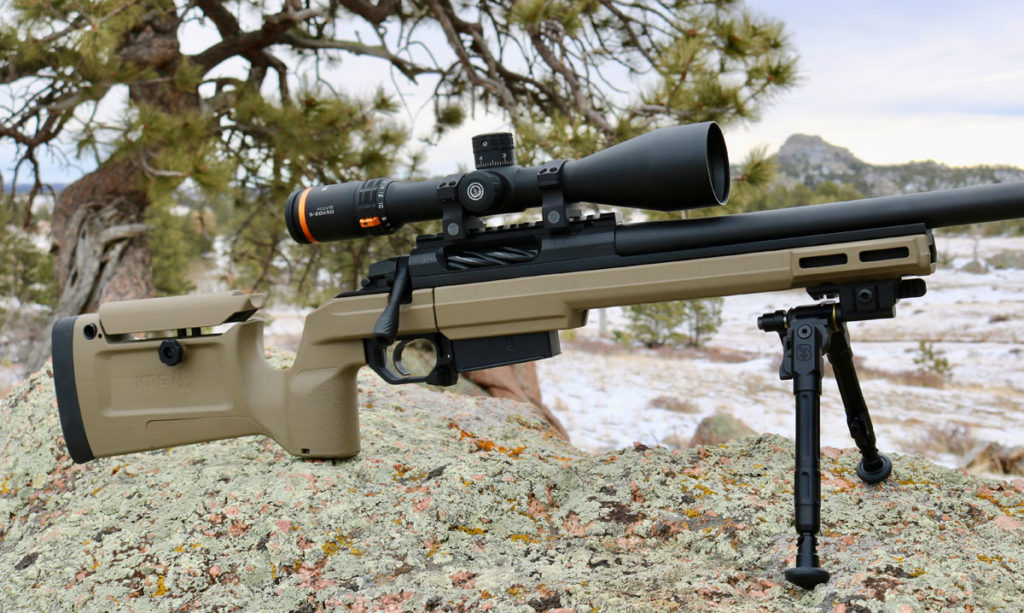 The most innovative part of this rifle is the Seekins designed Havak action. It is a 700 pattern but unlike traditional 700 actions, the bolt has four inline lugs that sit at the 3 and 9 o’clock positions when the bolt is closed. This gives the action several advantages. When the bolt is unlocked the bottom lug runs at the 6 o’clock position, making it possible to use double stack magazines with the Havak. With the lugs out of the way, it leaves more room for the extractor and the ejector. The bolt has a stout M16 style extractor and a large ejector. Case extraction on this is more like an AK than a bolt gun. I had to sift through the snow to recover some of my brass. 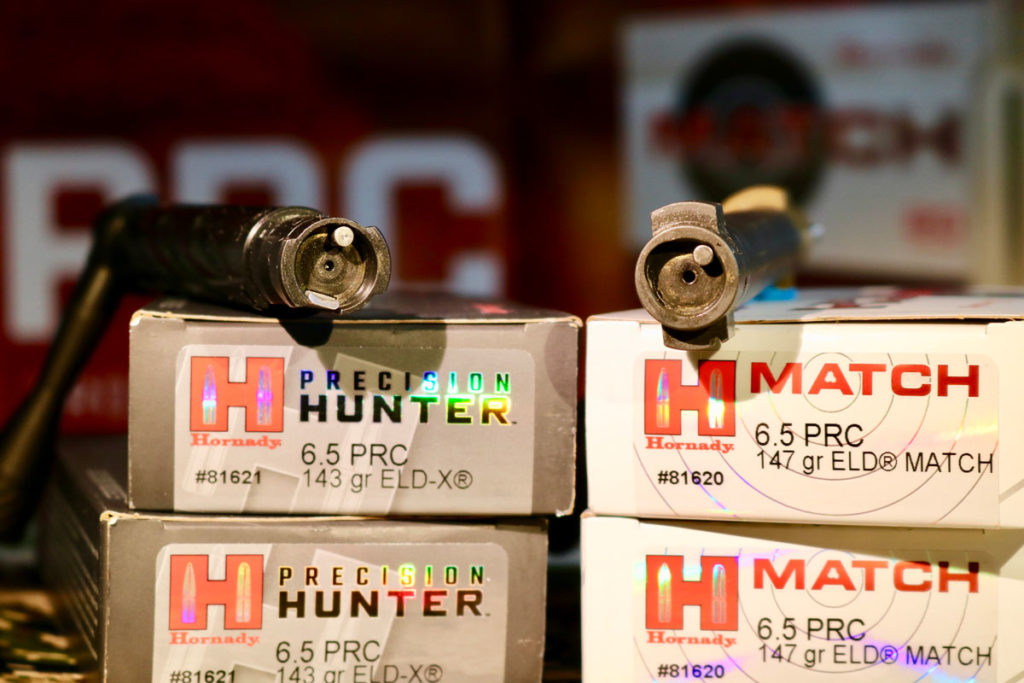 Havak bolt on the left, traditional Rem 700 bolt on the right with the lugs in simulated closed bolt position

The bolt has flutes that not only look good but are highly functional because it gives dirt and debris a place to go. Seekins extended the length of the bolt handle and knurled the end which helps allow you to run it like a boss. In a sport where 1/10’s of a second can mean the difference between a trip to the prize table or go home with nothing but a match t-shirt, positive bolt manipulation is very important. They also made the bolt head removable for an easy change out if needed. This also allows for tighter machining tolerances and better lockup, which equates to better accuracy.  The body of the bolt is the same diameter as the lugs so it runs smoothly in the action without the bounce you can get with traditional bolts. This bolt is uber functional and just looks cool. I’d put one on a chain and wear it around my neck but I’m not that pretentious. 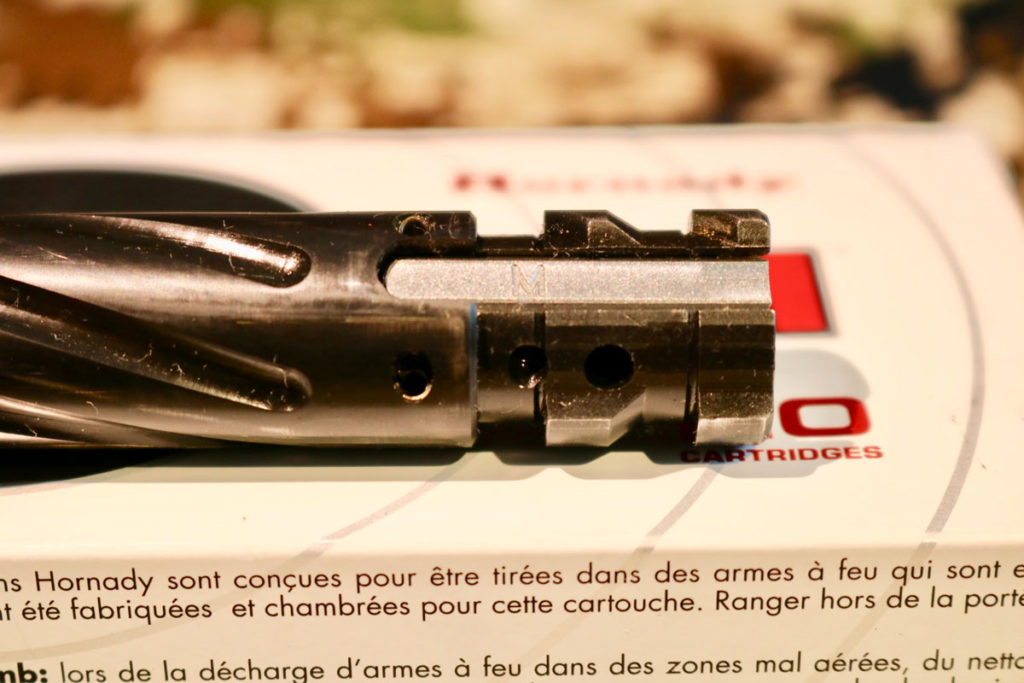 Havak 20 MOA action rail with recoil lug. Havak bolt stop on side of the receiver.

Seekins gets their barrels from Rock Creek as 5R rifled blanks but all the rest of the work is done in house. They chamber, crown, thread the muzzle 5/8 x 24, and profile the barrels. The contour of the barrel on the Havak is their light tactical which falls between a Varmint and Sendero. This barrel thickness provides a good balance of stiffness, heat dissipation, and weight. Seekins uses a breech ring in their action they machine to very tight tolerances. The bolt lugs sit inside the ring and the barrel screws in up against the opposite side of the ring. What does this mean for the shooter?  One – tight and consistent head spacing is maintained. Two – when you need a new barrel because you shot the old one out or want a different caliber you can simply order a new one from Seekins.  Screw it in, torque it down and you are good to go. 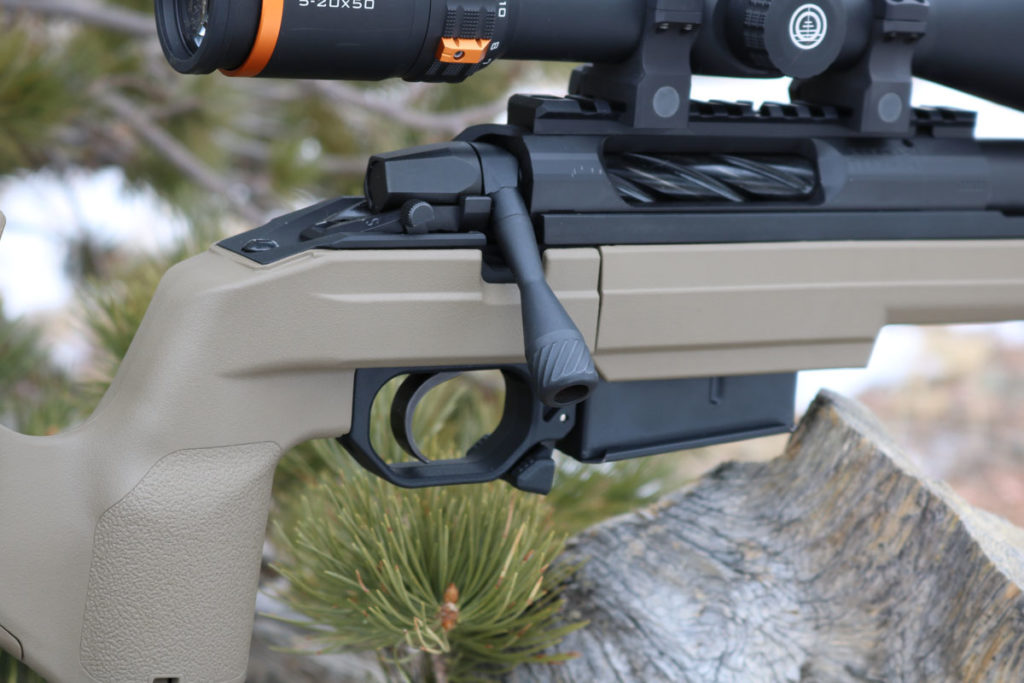 The Havak comes with a Timney 510 trigger set to 3-3.5 lbs. It is a great single stage trigger with a wide shoe. I prefer a wide shoe for competition because I feel it gives better trigger control, especially when having to make fast multiple target engagements. Having the wide shoe also came in handy while testing the rifle. I was wearing light gloves due to cold and snowy conditions. The trigger is very nice but, full disclosure I’m a two-stage kind of guy and would install a Timney 532CE trigger if this was my rifle. Because this is a Rem 700 pattern rifle any trigger that is designed for a 700 will work in the Havak.

Seekins put in a lot of thought and testing when choosing a chassis for the Havak. The KRG OPS Bravo came out the winner and for good reason. The Bravo chassis is well designed, rigid, and hard to beat for the price. The founders of KRG are former Special Forces snipers and competitive shooters so when they design a product it comes from experience. 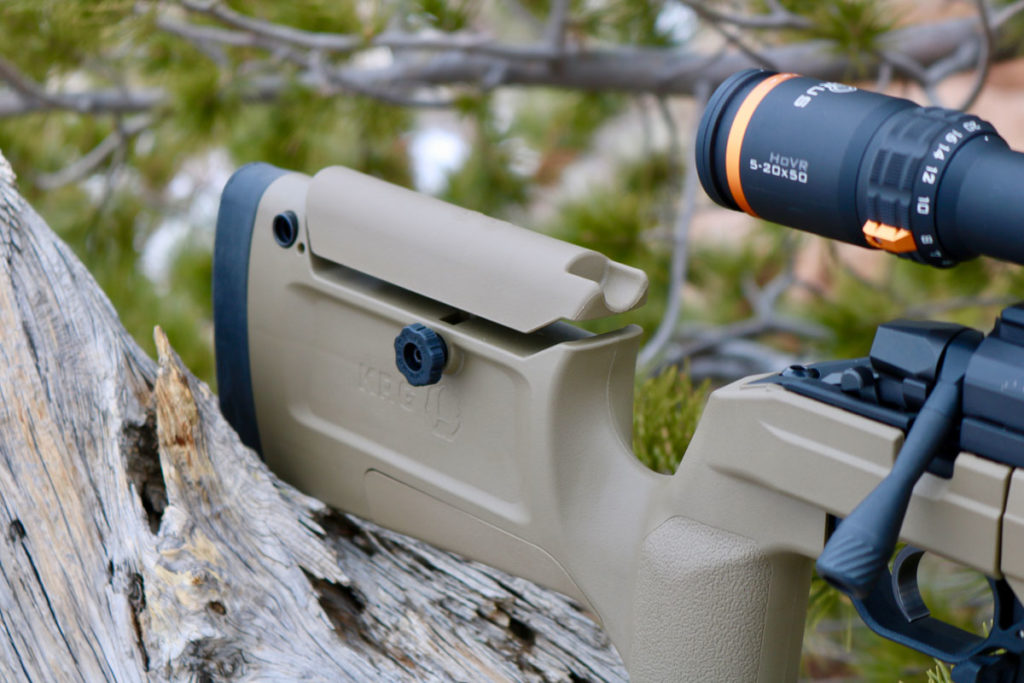 The Bravo chassis is adjustable for comb height and through the use of spacers length of pull is also. It has a full-length rigid aluminum spine which keeps the forend from flexing and allows for modularity. The bedding area is machined to precise tolerances so there is no need for custom bedding of the action. It takes AICS style magazines giving the shooter a large selection to choose from. The magazine release is ambidextrous and wide but profiled to avoid accidentally unseating the magazine. The Bravo has polymer skins that are removable, making accessory attachment very easy. KRG makes a ton of add-ons for the chassis, ranging from rail sections to barricade stops and a spigot mount for a bipod. The chassis has slots designed to be used with accessories that attach via the MLOK system. 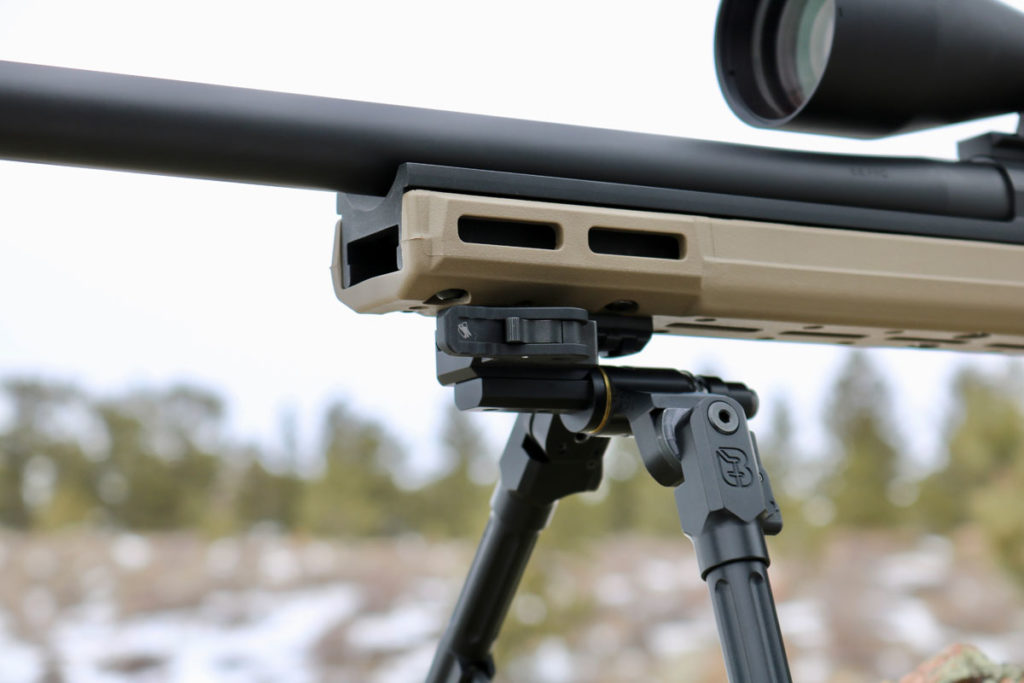 The bottom of the chassis is flat which provides a great surface when shooting off barricades. It is also the perfect platform for attaching the new Seekins Precision MRAS (not pictured). This rail attaches to the MLOK slots on the bottom of the chassis and allows the use of ARCA-Swiss type ball heads for shooting off tripods and bipods that attach by the ARCA system. The MRAS is lightweight and comes in four lengths 3.2, 4.5, 8 and 10.5 inches.

How does it shoot? I hate to disappoint but there were no surprises at the range, this rifle is a hammer. Seekins sent me the rifle in 6.5 PRC and the great folks at Hornady, the people that designed and developed the 6.5PRC, sent me ammunition to run through it. The rifle shot great with both the 147 ELD Match and the 143 ELD-X Precision Hunter. Groups at 100 yards were shot using a TAB gear rear bag and a Thunder Beast bipod. The smallest 5 round group measured right at 0.34 inch with the 143 ELD-X. The largest 5 round group measured .458 inch using 147 ELD-M part of that was due to shooter error. Sorry, but it was starting to get cold out there. Velocities were 2755fps for the 147 ELD-M and the 143 ELD-X at 2898fps. 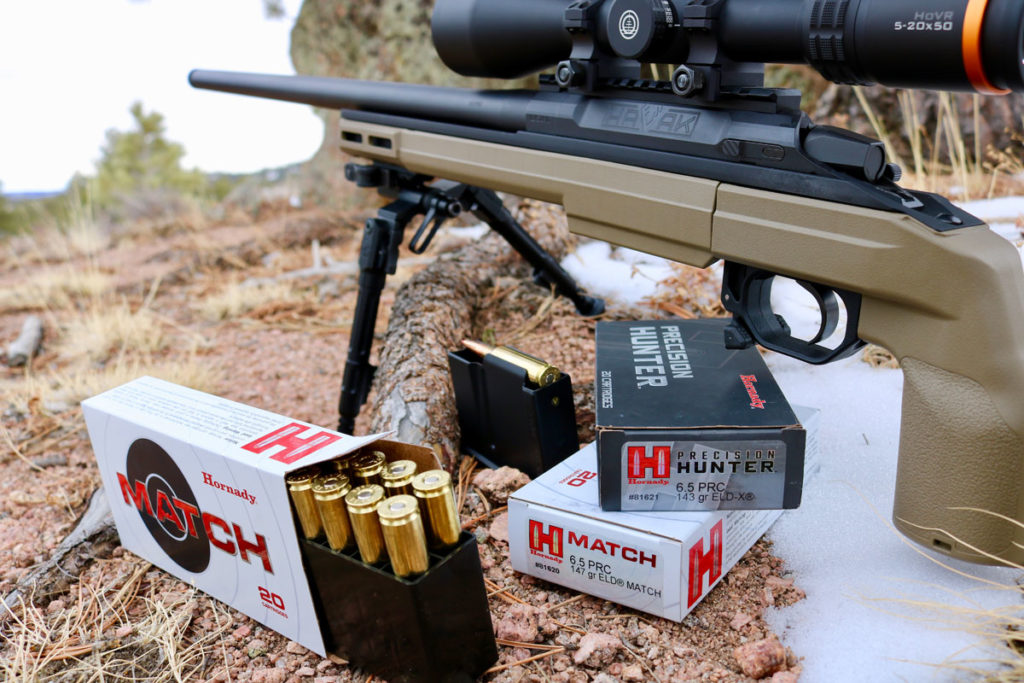 Shooting a very accurate rifle and using data from the Hornady 4DOF ballistic program banging steel out to 900 was a piece of cake. This rifle is totally capable of going much further but the Wyoming Department of Snow Flurries had other plans that day and I was unable to stretch it out due to poor visibility. To give you an idea of how flat this rifle/ammo combo shoots my elevation hold at 1000 yards would have been 6.7 mils with the 143 ELD-X and 7.3 with the 147 ELD-M one of the many advantages of living at 7400 feet. A 10 mph full value wind would be needed for me to have to hold 1 mil for wind deflection at that distance. For comparison shooting my trusty 308 Win with 168 ELD-M elevation hold is 8.9 mils and 2.4 mils for the wind hold. 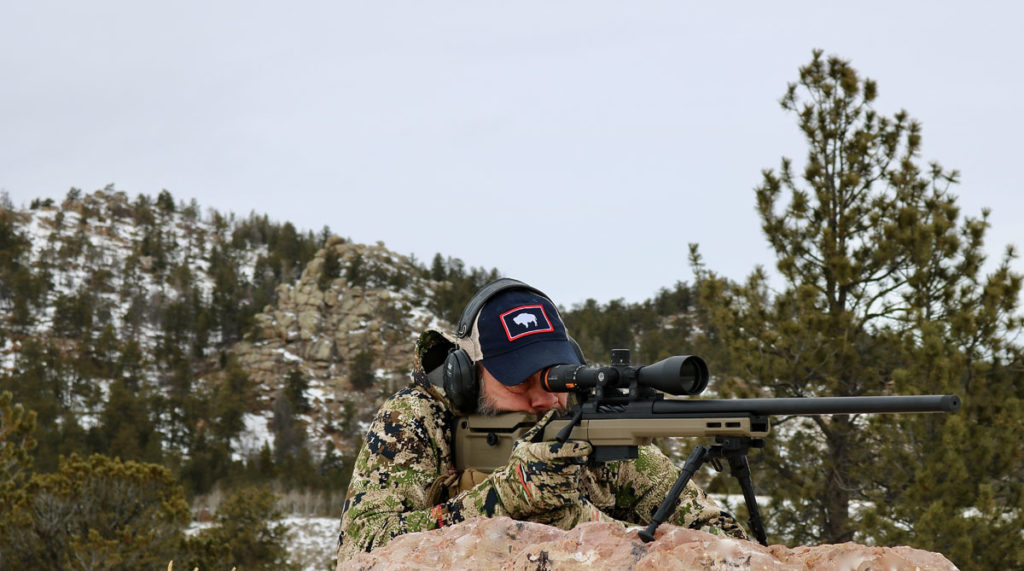 Closing thoughts. This is a great custom rifle at an incredible price point with Seekins lifetime warranty. If you are looking to get into PRS or just want a very accurate rifle to crush steel without having to sell a kidney, this is your rifle. The Havak also allows the owner to upgrade if they decide to move into an open or tactical division after a season or two in production. Instead of having to purchase a new rifle the shooter only needs to upgrade the Havak’s chassis with a KRG Whiskey-3 or Accuracy International AX chassis. The 2019 PRS season is just kicking off so if you are sitting on the fence wondering if you should purchase one or not I suggest you bust out the credit card and buy one. Talking to Mile High Shooting every Havak they get shipped in is going right back out the door. I’d hate to see anyone miss a match because they are on a waitlist for this rifle. 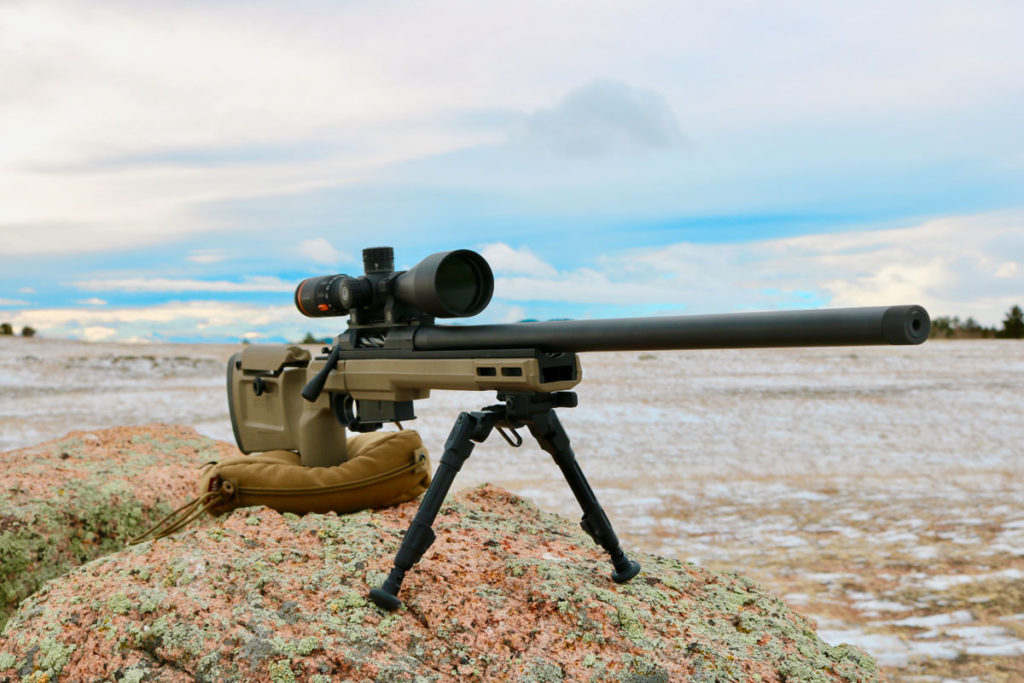 The barrel is threaded, capped, and all ready for your suppressor or muzzle brake.

***Shop GunsAmerica for your next Seekins Havak***

About the author: Stephen Ourada is a former marine and Green Beret serving in 5th and 3rd SFG before retiring. He is a former Special Forces sniper and sniper instructor with multiple combat tours. He is an outdoorsman who spends as much time in the mountains as possible either hunting or photographing wildlife and nature. He is a long-range shooting competitor, belongs to several conservation organizations and is a Lifetime member of the NRA. You can follow him on Instagram @northrangehunter