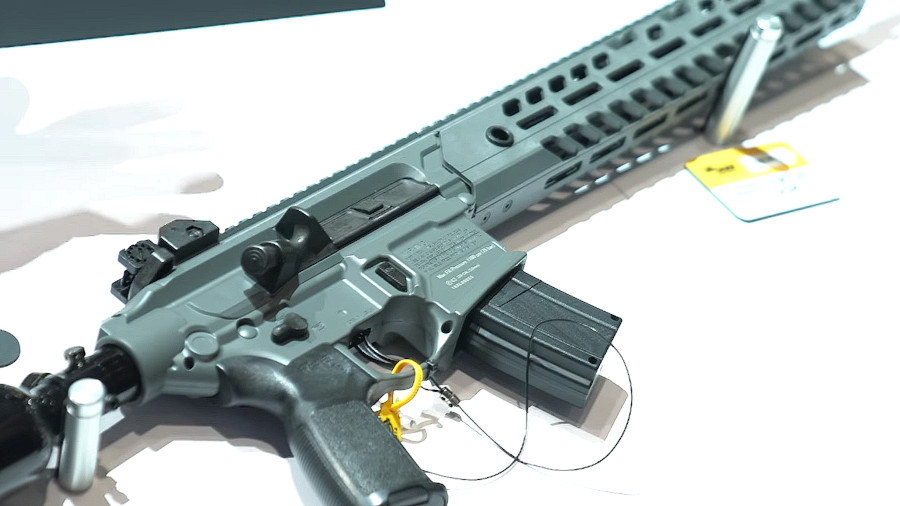 SIG Sauer is making a big push into the air rifle market with a whole catalog of new rifles and pistols for plinking, small game hunting and training. One exciting gun is the upcoming SIG Virtus, a pre-charged pneumatic rifle patterned on their MCX carbine.

The Virtus weighs and handles almost exactly the same as its centerfire counterpart which makes it a very affordable training and teaching tool. It also uses a clever magazine system that conceals a small belt of pellets.

The standard magazine holds a 30-round belt and can quickly be reloaded with fresh belts through a loading gate on the side. Each airgun comes with flip-up iron sights and the grip holds a multi-tool with a sight adjuster and belt reloader. The Virtus PCP has a standard M-Lok handguard and railed flattop receiver for optics and other accessories.

The Virtus has a tank that can be charged up to 3,000 PSI. It’s a regulated system that fires at around 1,100 PSI pushing standard .22 airgun pellets up to 700 feet per second. SIG says the tank is good for about 200 shots between refills, with about 150 full-power shots before the system starts to taper off.

The regulated gas system helps ensure repeatability and accuracy, and the Virtus is capable of inch groups at 50 yards.

The suggested retail price is $349, with real-world prices under $300, which is very appealing. SIG will also offer a U.K.-legal version for sale overseas.

Availability in the U.S. is expected to be toward the beginning of the second quarter of 2019, hopefully around May.

This is the first PCP rifle from SIG but with the company’s big foray into airguns there’s sure to be more in the works. SIG is working to build a very complete line of PCP, CO2 and airsoft products including ammunition and more for fun and for training, all at competitive prices.

For more information about SIG’s new airguns check out their website for details.