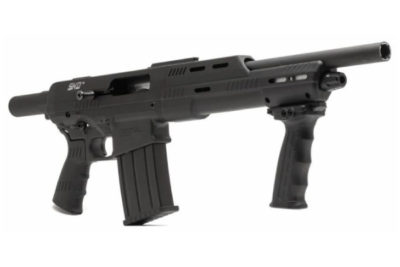 The SKO Mini features a 14.75″ barrel but doesn’t require a tax stamp to own or shoot. (Photo: Standard Manufacturing)

And if it isn’t a shotgun, it can’t be a short-barreled shotgun either, no matter the barrel length.

Using the same legal principle applied to the Remington TAC-14 and the Mossberg Shockwave, the semi-automatic SKO Mini can be purchased with a 14.75-inch barrel without the additional $200 tax stamp usually required to purchase a shotgun with a barrel longer than 18 inches.

Because the SKO Mini comes without a stock and its overall length is greater than 26 inches, the ATF can’t categorize it as a shotgun or as “any other weapon” under the National Firearms Act. In his letter to Standard Manufacturing, the ATF’s chief of the Firearms Technology Industry Services Branch calls it simply a “12 gauge firearm” and concludes it does not fall under the NFA.

The SKO Mini is a gas-operated firearm fed from a detachable box magazine. The gun comes with a 2-shell magazine, though 5 and 10-shell magazines are also available.

The receiver is CNC machined out of 7075 aluminum and features a MIL-SPEC hard coat anodized finish. It uses similar controls as an AR-pattern rifle with an ambidextrous safety and mag and bolt release, and the 22-inch Picatinny top rail provides ample room for optics, lasers, and illumination devices. The polymer grip is also compatible with most AR-style grips, and the vertical foregrip is included.

The 14.75” barrel is constructed from 4140 steel and accepts both 2 ¾” and 3” shot shells. The Tru-Choke thread pattern accepts a variety of choke tubes, door breachers, and accessories. Internal components are salt bath nitride coated for optimum lubricity.

MSRP is $699, shipping is $25, and the firearm is unavailable in New York and California. 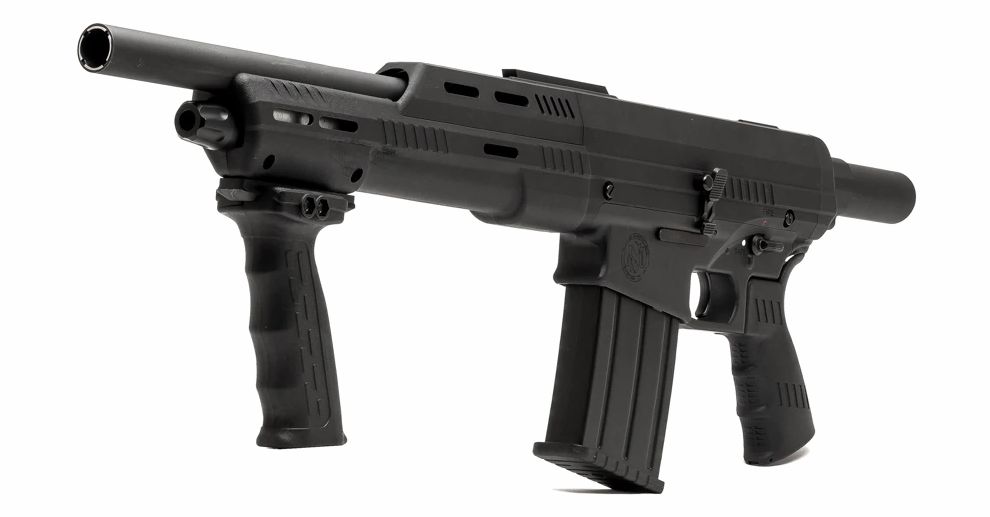