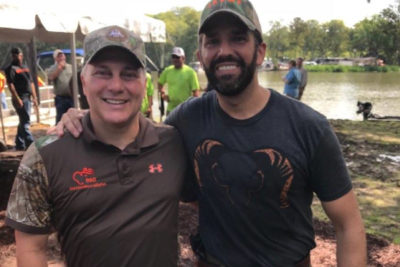 As a victim of gun-related crime and the Republican House Whip, Scalise would normally have been allowed to testify at a congressional hearing so pertinent to his expertise and life experience. Instead, House Democrats denied his request to speak, claiming that too many members of Congress had already made the same request.

“I was surprised, because it’s unprecedented,” Scalise told Fox News. “In the past, when we were in charge on the Republican side, if the Democrats selected among one of their witnesses to be a sitting member of Congress, we always gave them the courtesy of testifying in a proper setting, and we were asking for that same courtesy — and they denied it.”

Scalise famously survived near-fatal gunshot wounds after a man opened fire at a GOP baseball practice in 2017. The shooter was stopped by U.S. Capitol Police and the Alexandria Police, but not before the left-wing activist shot four people at the baseball field, all of whom survived.

Scalise submitted his written testimony to the committee, and Fox News published it on Wednesday.

In his testimony, Scalise points out that the universal background check legislation currently being considered by Congress (H.R. 8) would not have stopped the man who shot him, nor would it have stopped many of the other mass murders in recent history.

The bill won’t reduce crime, either. The representative notes a recent study that determined California’s universal background check law was not associated with a change in homicide rates and references a DOJ survey in which a vast majority of criminals reported acquiring firearms from already illegal sources.

Universal background checks, Scalise observes, “would not deter a criminal from engaging in criminal activity, and it won’t decrease gun crime. Instead, it only succeeds in limiting the ways that law-abiding citizens could exercise their Second Amendment rights.”

But rather than harp only on the ineffectiveness of gun control, Scalise also highlights the life-saving benefits of firearm ownership. He references four examples from January of law-abiding citizens using their firearms to defend themselves or others, one of which resulted directly from pro-gun lawsuits that restored the right to bear arms to Chicago residents.

“I firmly believe we must never forget, nor minimize, the importance of the Second Amendment to our Constitution,” Scalise concludes. “H.R. 8, as well as other new gun control legislation currently being considered by the House Democrat majority do not accomplish the goal of reducing gun violence.”

“If our goal is to reduce gun violence, then we should focus on penalizing criminals, not law-abiding citizens.”

H.R. 8 has been referred to the House Committee on the Judiciary, currently chaired by New Jersey Democrat Jerrold Nadler.

Previous post: Fathers of Victims Want Award for Paper that Exposed the Truth Behind Parkland Shooting