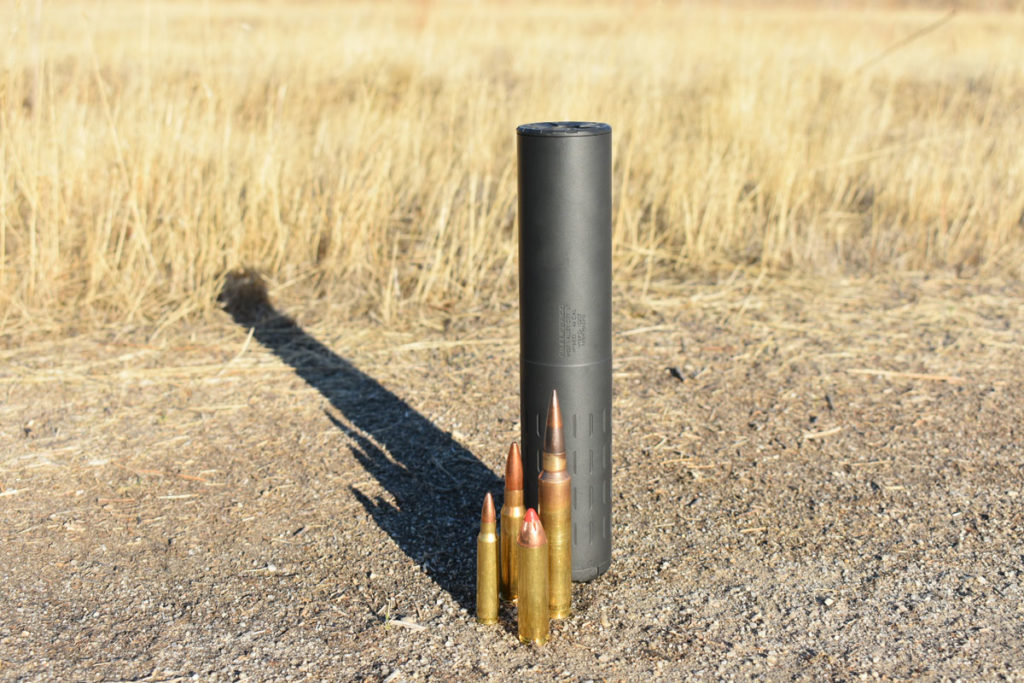 What is more fun than shooting big, loud guns? Shooting big, quiet guns and that is a tested and proven fact. I had the opportunity to use the Silencerco Hybrid 46 suppressor and jumped on it because of my large collection of various caliber guns. The Hybrid 46 can be used on virtually any gun that is chambered for a cartridge that has a smaller diameter projectile than 46 caliber. This is allowable because of its sturdy, welded construction of only the lightest and strongest metals available. The interchangeable end cap and thread adapter also contribute to the “do all” attribute of this suppressor. If a person only had the money and time to purchase one suppressor, this would be the one. 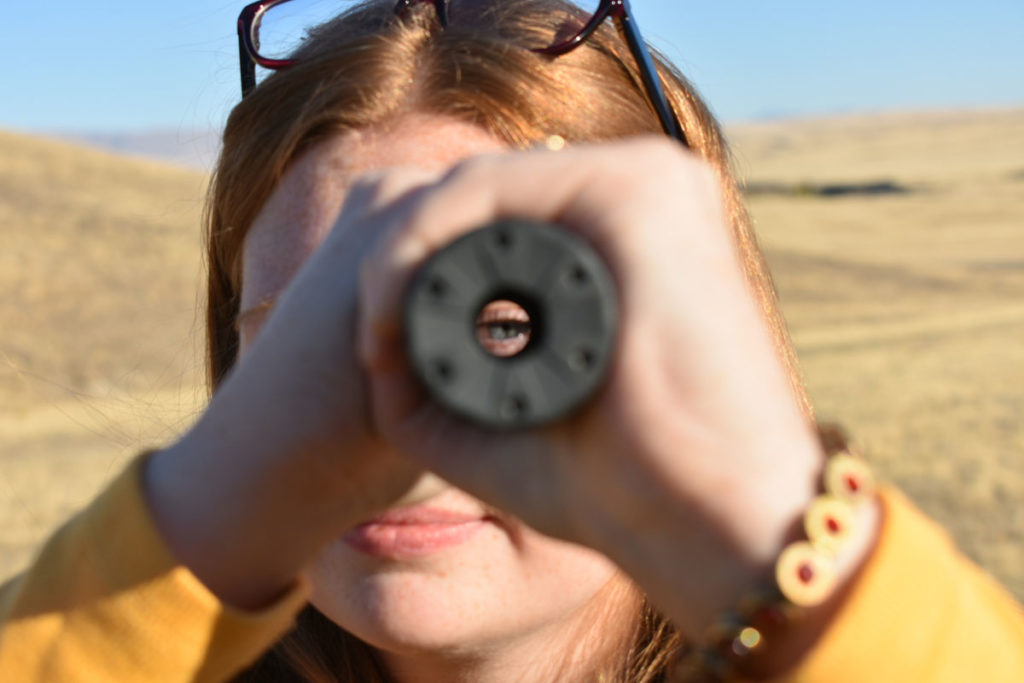 Due to the nature of the welded 46 caliber baffle stack and the swappable end caps of the hybrid 46, it takes minimal effort and part swapping to optimize the can to the caliber of your choice.

As mentioned, the SilencerCo Hybrid 46 can be used on most any hunting and plinking cartridges, being only limited by bore diameter of the few that it cannot be used on. This means that if your gun shoots a projectile that is less than 46 caliber in diameter and the barrel is longer than 16” on all non-magnum rifle calibers and 18” on magnum calibers this suppressor will fit your needs. Being built from titanium and steel with a welded baffle stack, it is full auto rated and will stand the test of time and anything you can throw at it. A side note here: Because of the welded baffle stack and inability to access each baffle for cleaning, it is not recommended by SilencerCo to shoot lead projectiles through this suppressor. However, the pros far outweigh the cons in this instance. Last, it needs mentioning that this can is also compatible with any pistol with the same caliber stipulation. This is possible because of the ability to attach a piston or Neilson device to the can which allows most handguns to function as designed with the added weight of the suppressor on the end of the barrel. All swappable parts are user interchangeable and readily available for purchase as extra accessories. 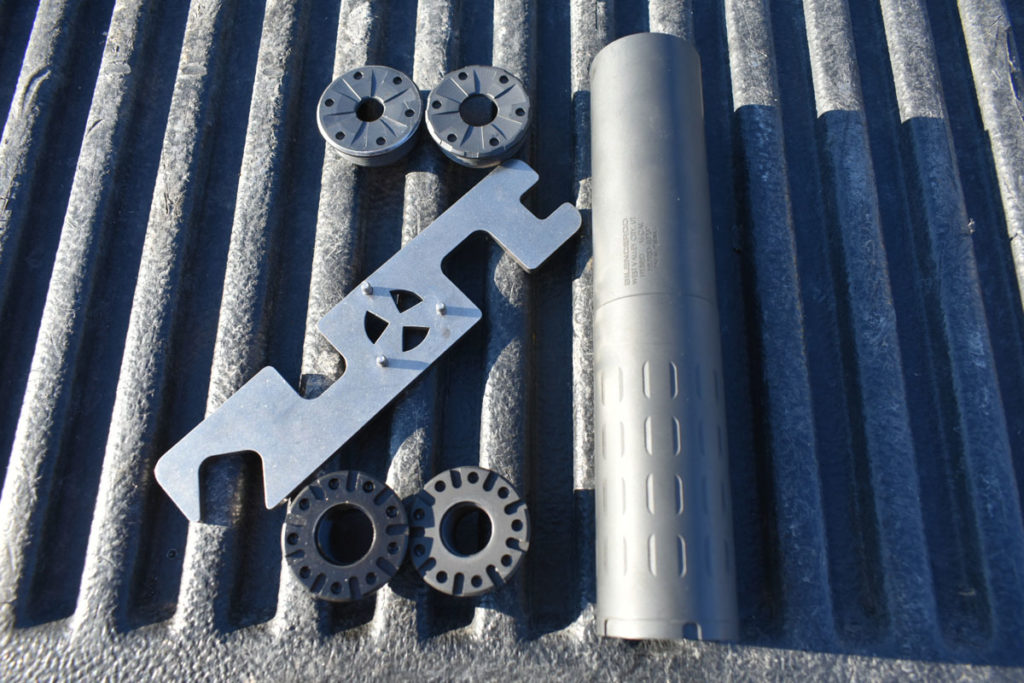 Not only can the end cap be swapped to fit the caliber of your choice, but the thread adapter can be changed out for compatibility of the Hybrid 46 on basically any rifle or pistol with a threaded muzzle, all using the same tool.

Check out my testing of the SilencerCo Hybrid 46 here:

I had three main guns that I wanted to try the SilencerCo Hybrid 46 on that I felt represented a wide spectrum: the 450 Bushmaster, 308 Winchester and 338 EDGE which I felt covered the base of big bore, non-magnum and large magnum respectively. It seems completely wild that I can use one suppressor for all of these calibers and still have great sound suppression results, but what I heard pleasantly surprised me. I did not have a sound meter for my tests, so my results are completely opinion based, but that is the case with 99% of suppressor purchasers. I started out using Ruger’s AR-556 MPR in 450 Bushmaster with some Hornady 250 grain Black ammunition. The suppressor did not tame recoil on this caliber as much as I hoped, but it did as well as can be realistically expected. However, the sound suppression was phenomenal. The rifle was comfortable to shoot with supersonic ammunition and no ear protection and had low tonicity to it. 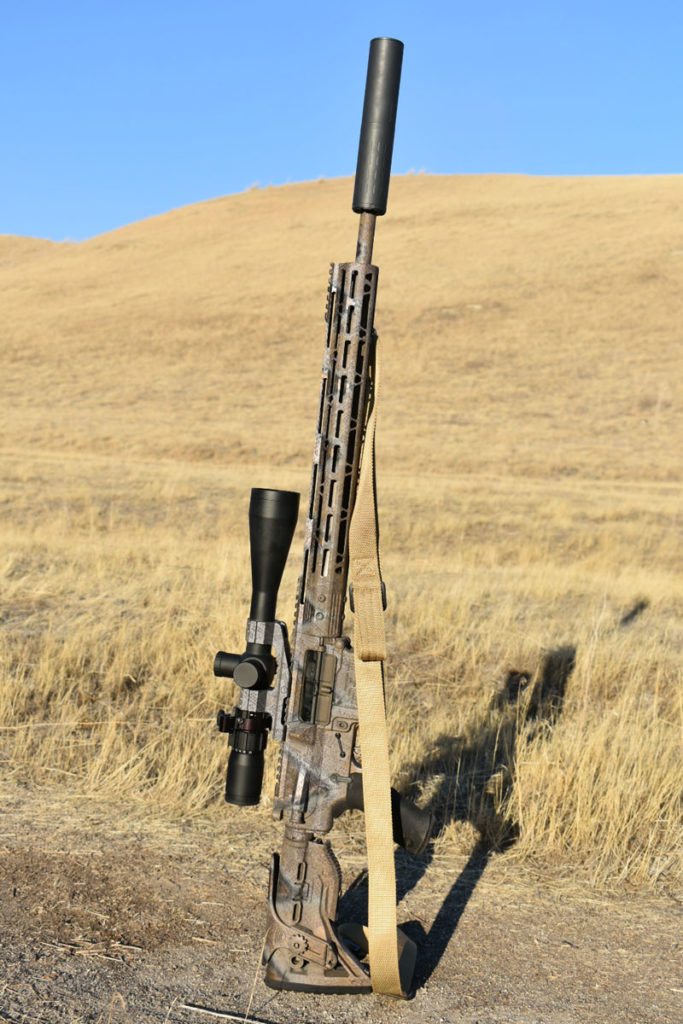 The Hybrid 46 adds minimum weight to the end of any gun while drastically decreasing the loudness of the shot to hearing safe levels.

Next, I used the same rifle to test some big bore subsonics. I loaded up a 350 grain Hornady XTP behind a not to be mentioned amount of Hodgdon Trail Boss and was getting velocities of around 1050 FPS with minimum standard deviation. I found that shooting this load, the Ruger MPR would not cycle the ammunition, but later I did find a subsonic load that would function using Winchester 296 powder and 405 grain resized projectiles. Both loads were extremely quiet. I cannot emphasize how quiet it is except with the statement that it could definitely be shot within neighborhood limits without alerting any neighbors. (Do not do this, it is not only illegal but extremely dangerous and I am only using this scenario to paint a mental picture.) Again, the tonicity was low, as can be expected from a high volume can.

The second rifle that I put the Hybrid 46 on was a DPMS style LR-308 chambered in 308 Winchester. To make the switch from the 450 Bushmaster, all I had to do was change the thread adapter from the 11/16×24 thread adapter to the 5/8×24 thread adapter as well as swap the end cap from the 45 to the 30 caliber end cap which was all done with hand tools on the tailgate of my pickup. The first ammunition that I shot was 155-grain Prvi Partisan ammunition which is supersonic. The suppressor comfortably brought the sound level down to hearing safe which made shooting pleasant and put a big smile on my face.

Again, I wanted to also test out the subsonic realm of ammunition through this caliber and can which I did using 210 grain Berger bullets and another secret amount of Hodgdon Trail Boss powder. Shooting around 1050 FPS again, the Hybrid 46 made the 308 Hollywood quiet. I cannot stress how quiet this combination was. I could literally hear the sound of the hammer falling on the firing pin over the sound of the gun firing. This lead to a lot of fun and again, big smiles. 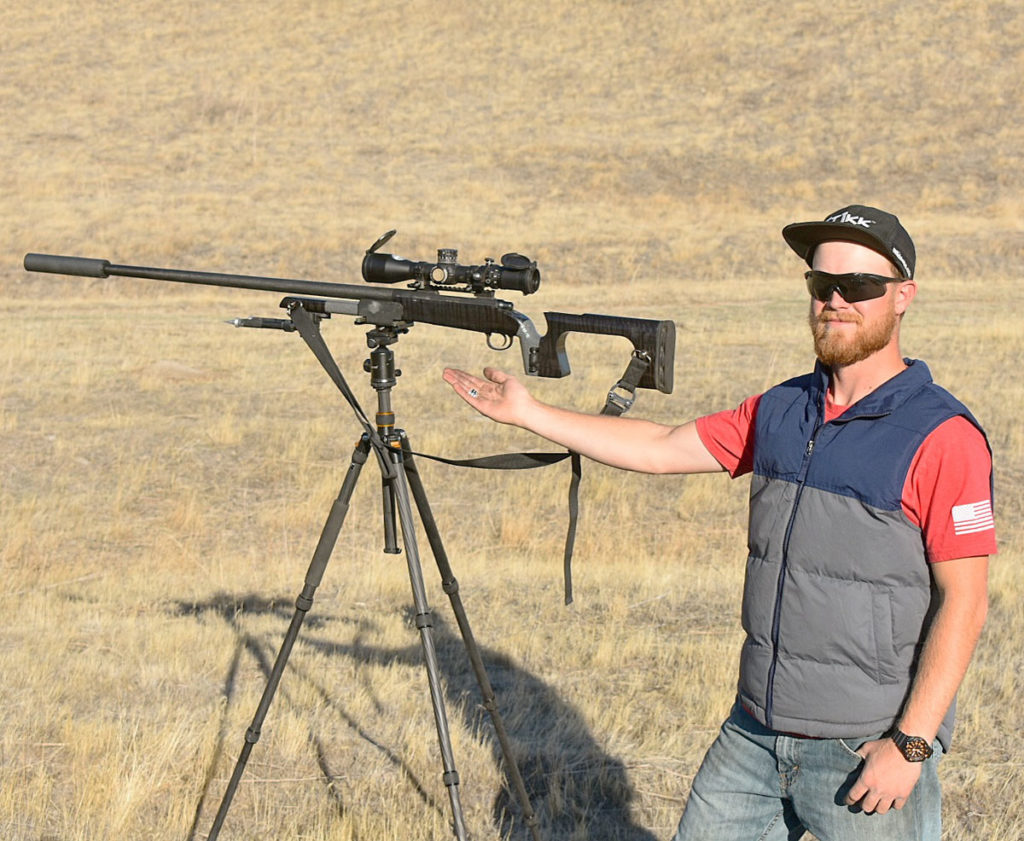 Only adding just over 7” of length to the end of your rifle, the Hybrid 46 either keeps a short gun compact or further lengthens the ridiculously long precision rifle that you may have.

Last, I tested the Hybrid 46 on its ability to suppress a large magnum cartridge: the .338 EDGE which is known to be the .338 Lapua’s ballistic twin. Again, with simple part rearranging with hand tools on the range, I was able to take the Hybrid 46 directly off of the 308 Winchester that I had it on and shoot it on the .338 EDGE. As can be seen in the video of me shooting all of these gun/ammo combinations, recoil was stout with the suppressor, but the sound was much less intimidating. Anyone who has been around a gun that is this big while someone has shot knows how unpleasant the experience can be, but with the Hybrid 46, I was able to shoot comfortably without hearing protection while using full powered loads.

Using the Silencerco Hybrid 46 suppressor has made me a big believer in the “one to rule them all” when it comes to suppressor selection. I know many people that do not buy suppressors due to the hassle of getting the tax stamp. And I am convinced that these same people would be much more likely to buy a suppressor to improve their shooting experience if they were aware that there was a device out there that could be used on all of the guns that they have in their collection. This can is well built being welded together using only high-quality metals and knowing that it can basically handle any gun that I put it on really gives me peace of mind for my own safety. With the type of shooting that I do, I was not able to get it hot enough for me to need to worry about causing a malfunction. Besides, this is in the back of my mind due to the Hybrid 46 being full auto rated. I would highly recommend the SilencerCo Hybrid 46 to anyone who is interested. 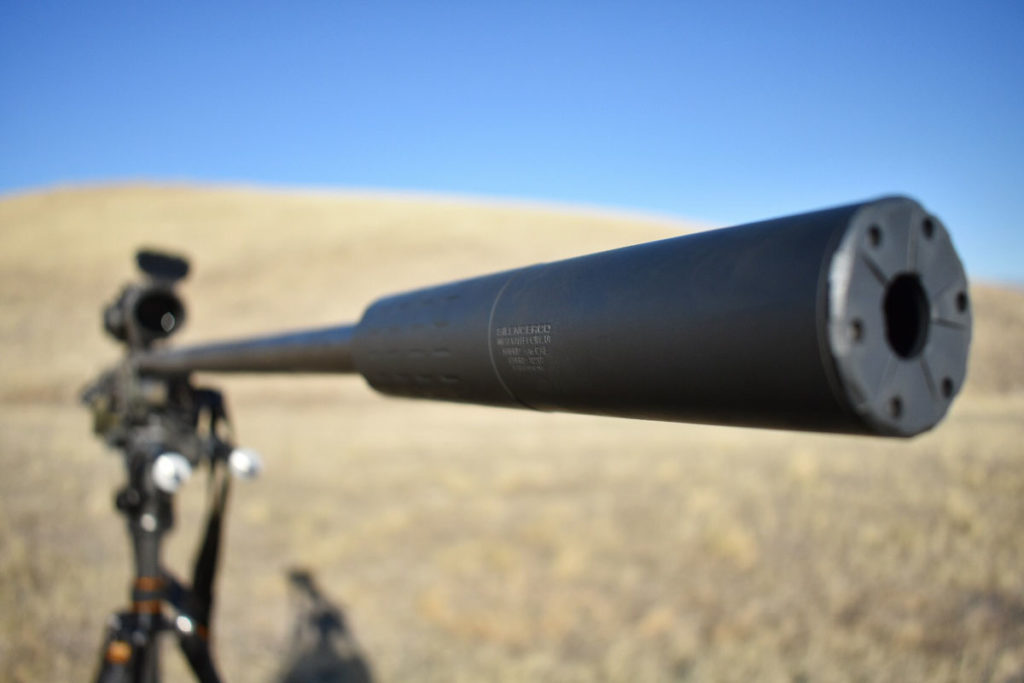 The Hybrid 46 has clean lines and a superior finish which further shows the quality of its construction.

Check out my review on the Ruger AR-556 MPR 450 Bushmaster here: https://www.gunsamerica.com/digest/ruger-ar-556/

Next post: Brace Yourself, Diamondback Firearms DB15 Pistol in 7.62×39

Previous post: A Friday Afternoon in Dallas: Two Murders that Shook the World & Analysis of the Weapons Used