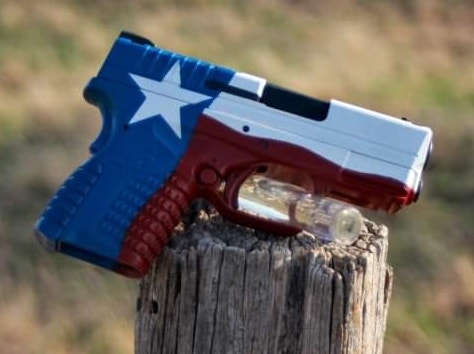 Note: This post has been updated to include comments from Chris McNutt.

Seventeen states have removed permit requirements to carry a concealed firearm, but despite the Texas state legislature’s historically pro-gun stance, the Lone Star State hasn’t been one of them. And, according to recent reports, the status quo won’t be changing any time soon.

Two key Texas legislators have vowed to kill the state’s constitutional carry bill after a pro-gun activist appeared at lawmakers’ homes in Austin to protest their non-action on the legislation (HB 357).

Chris McNutt, the executive director of Texas Gun Rights, told GunsAmerica via email that he showed up at the legislators’ homes in part because Republican Speaker of the House Dennis Bonnen actively worked to stall constitutional carry from the beginning.

McNutt also told the Dallas Morning News, “If politicians like Speaker Dennis Bonnen think they can show up at the doorsteps of Second Amendment supporters and make promises to earn votes in the election season, they shouldn’t be surprised when we show up in their neighborhoods to insist they simply keep their promises in the legislative session,”

The Houston Chronicle reports that McNutt visited the residences of at least three lawmakers, including Speaker Bonnen’s. Bonnen’s wife answered the door, and McNutt handed her his card and left.

Bonnen condemned McNutt’s actions and vowed to kill the legislation this session.

“If you want to talk about issues and you want to advocate, you do it in this building. You don’t do it at our residences,” Republican House Speaker Dennis Bonnen told the Dallas Morning News. “Threats and intimidation will never advance your issue. Their issue is dead.”

The chairman of the House Homeland Security and Public Safety Committee, Democrat Poncho Nevárez, also decided to renege on his promise to give the bill a hearing.

“I wasn’t canceling the hearing. I was postponing it,” Nevárez told the Dallas Morning News. “But … once they started harassing, one, the speaker, and then these other representatives for no good reason, then I think it’s incumbent upon me not to reward bad behavior or make them believe that somehow this harassment led to me giving them a hearing.”

The bill’s sponsor, Rep. Jonathan Stickland, also condemned McNutt’s actions, saying in a Facebook video, “It’s never OK to target their homes or personal businesses when you know they are not in town.”

Stickland admitted the bill was dead and that he’s canceling his request for a hearing.

It’s doubtful that Bonnen and Nevárez would have allowed the bill to move forward even without McNutt’s actions. Bonnen called the bill “bad policy” and though Nevárez said he might be open to the bill “with a few tweaks,” he said it’s a “mistake” to not “train everybody.”

“It becomes a license for basically any felon to carry because you can’t stop them and ask them. That’s a problem,” he told the Morning News.

Previous post: First State to Ratify Constitution Now Wants to Abolish It: Anti-gun Bills Are Back in Delaware