The Chosen One: The Army’s M-17 Pistol Review 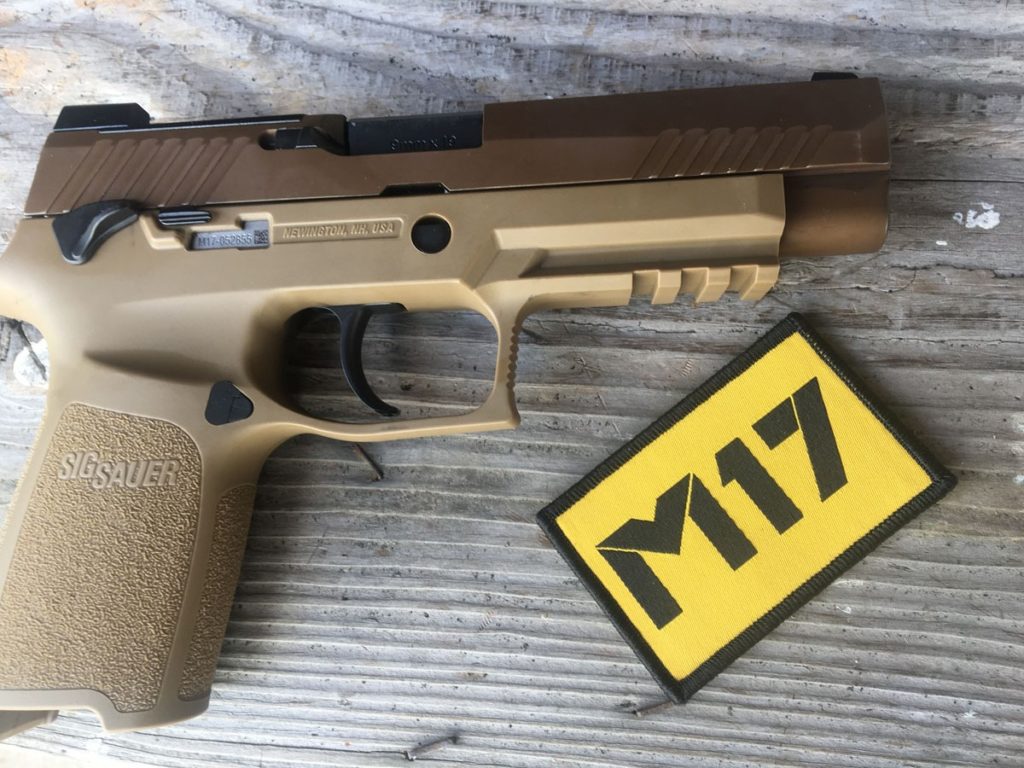 The SIG M-17 pistol is serving in combat with the US Army. The story has a happy ending, but it took years and millions of rounds to get there. The competition for the Army’s Modular Handgun System (MHS) contract was one of the most rigorous and highly competitive review processes in the history of military firearms. It was scrutinized and contested and endlessly questioned.

SIG submitted a 9mm P320-based platform. The only true modular candidate, SIG’s XM-17 performed well during the selection under all conditions the Army could dream up. After over two million rounds of testing, the XM-17 became the M-17 and a new icon was born.

The service handguns chosen by the Army have always become essential weapons; the Remington New Army, the Colt Single Action Army, Browning’s M-1911 and the M-9 Beretta are all classics. Now you can get the latest chapter in this historic line.

Other manufacturers have been selling their versions of the MHS while SIG has been busy making guns for the Army. Every branch of the military has adopted the M-17 and the smaller version, the M-18. At last, Sig has sent the military enough guns that they can make some M-17s for the rest of us. There are two civilian versions, The M17 Commemorative and the P320-M17 and they are on their way to an FFL near you.

The P320-M17 closely follows the specifications of the U.S. Army’s M17. The 9mm P320-M17 features a coyote-tan carry-length grip module available in three sizes and comes standard with a manual safety. Non-manual safety P320-M17 pistols will be shipped at a later date. There is a coyote-tan PVD coated stainless steel slide and black controls just like the pistols currently being shipped to the U.S. Army. The sights are a SIGLITE front night sight and removable Night Sight rear plate. 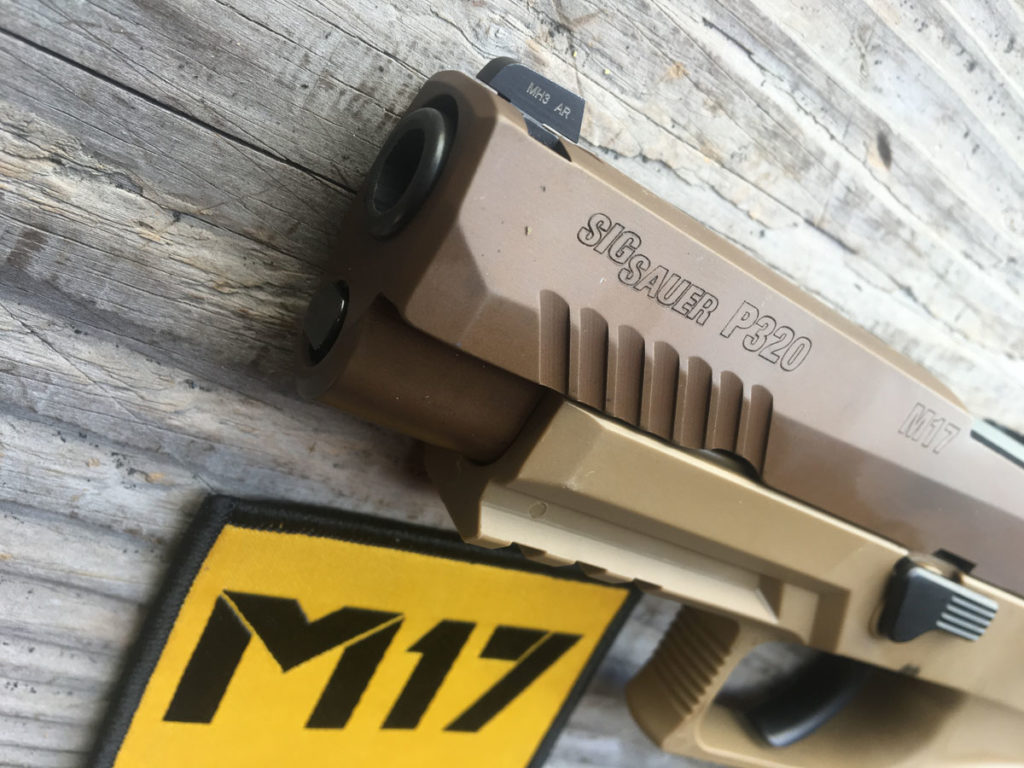 Many internet experts, who have never touched an M-17, believe that the small arms professionals in the Army, the Navy, the Marines, the Air Force, and the Coast Guard have gone through millions of rounds of extensive testing and picked the wrong gun. After my own limited test firing, just over three thousand rounds through the M-17 and the 320-M17, the M-17 is my choice too and I believe that the army chose the best gun for the job. 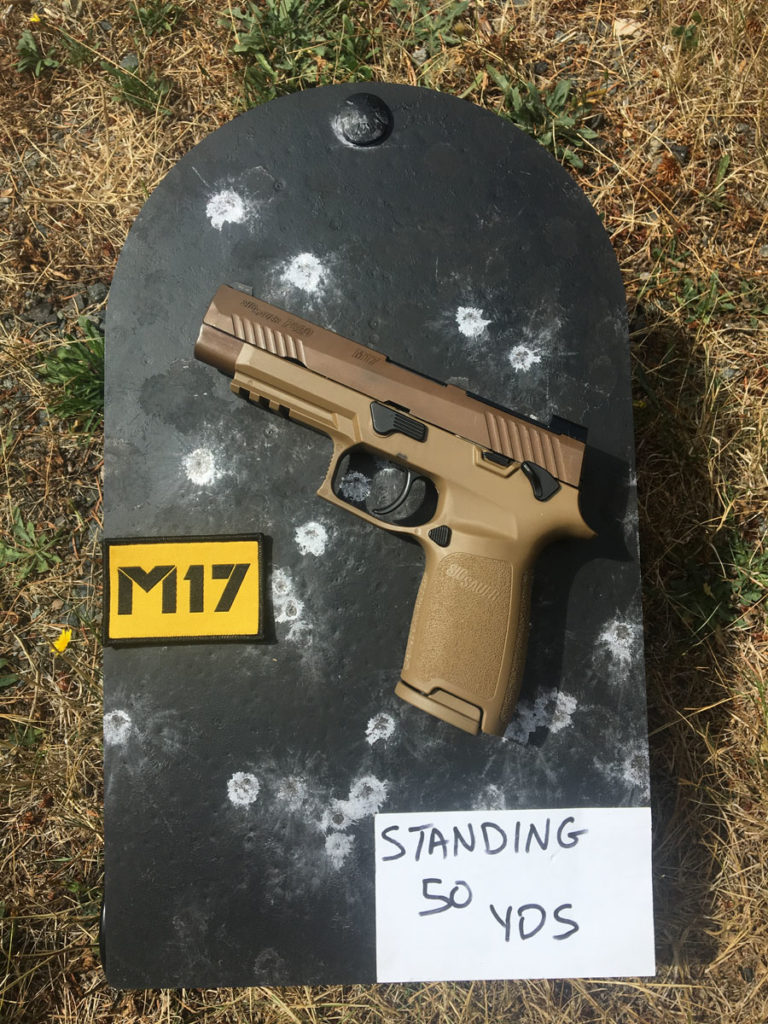 The P320-M17 easily clangs the CTS steel targets at 50 yards. At the Academy we shot steel out to 75 yards.

I got a 320-M17 a month ago. I have taken it to classes as a student and an instructor. I have shot thousands of rounds of ball and hollow points with no issues and no cleaning. I have lubricated it and I will probably clean it when it gets dirty. This is not a torture test; the gun just isn’t dirty enough to require cleaning yet. 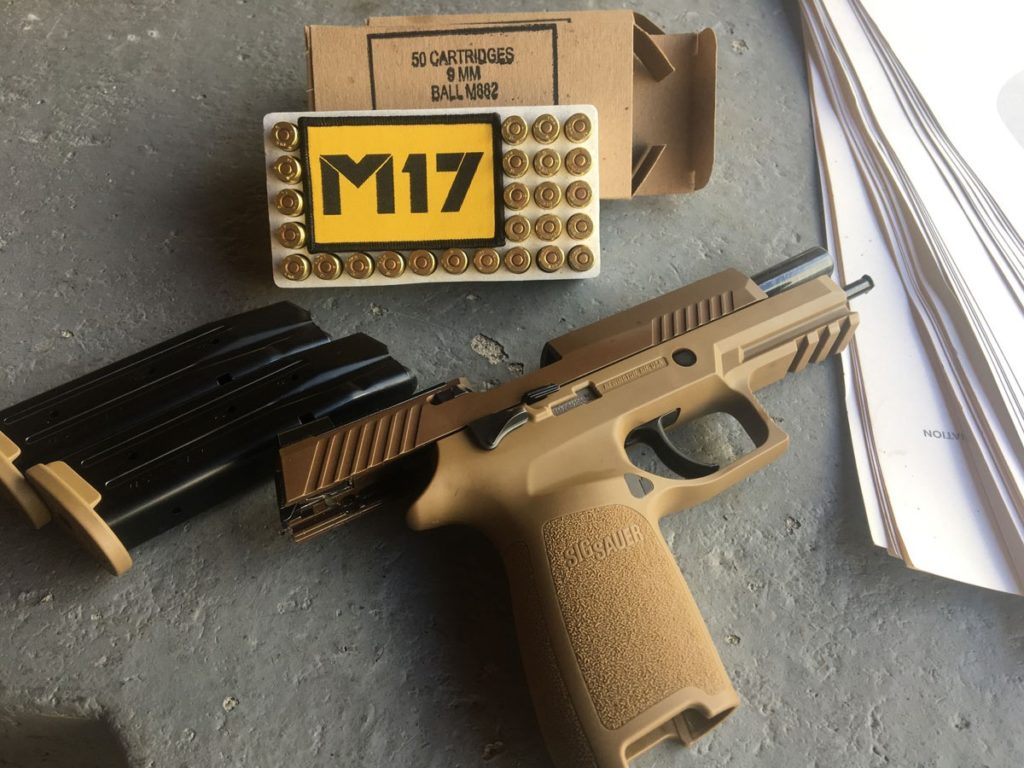 I had the opportunity to travel to New Hampshire to visit the SIG SAUER factory. The technology is highly automated with multiple quality checks. I got to walk the production floor and see every step of the process from machining to assembly. Trained professionals assemble guns and reject any component which isn’t perfect, but that is only half the story. 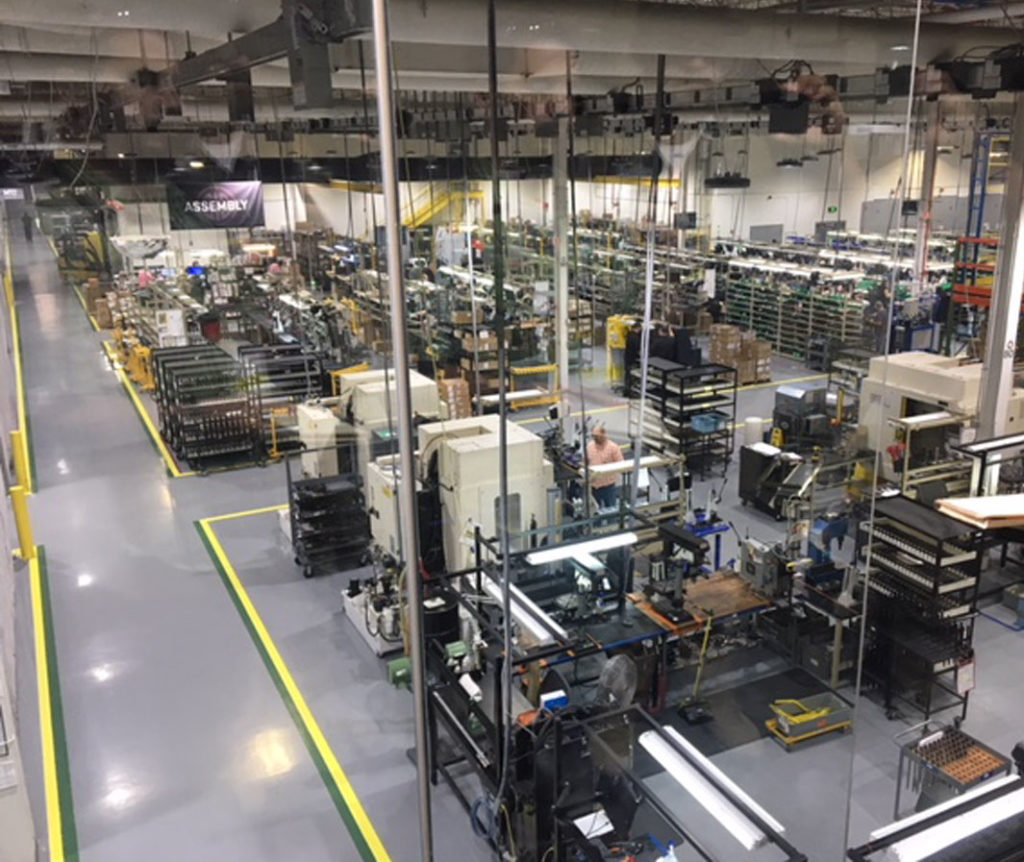 There is a quality plan for each part which dictates how many parts from each lot are checked at special robot laser verification stations which check every angle of a part. These check stations are connected to each of the automated CMC machines and automatically update the instructions to the machines, in real time. Problems are anticipated and avoided. This reduces bad parts, keeps them out of the supply chain and cuts costs so SIG can make better and less expensive guns. They test fire every gun and I got to witness the process while I was there. 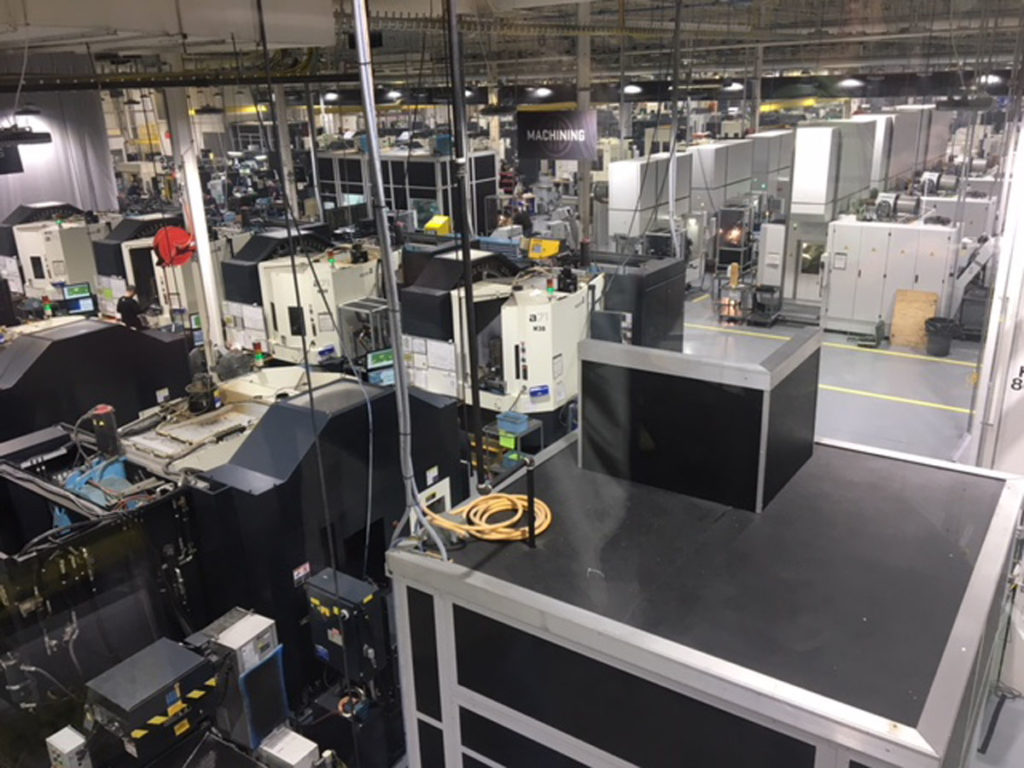 I also got to go to the SIG Academy and shoot the 320-M17 for a day under strict the tutelage of a couple of former Special Forces operators (one who is still active) on their staff. I shot 400+ rounds of SIG FMJ ammunition at paper and steel targets. We ran the guns hard and shot them hot. We worked up to multiple target drills and shooting a scenario in and around cars and barricades. The guns got hot and dirty and they all ran. 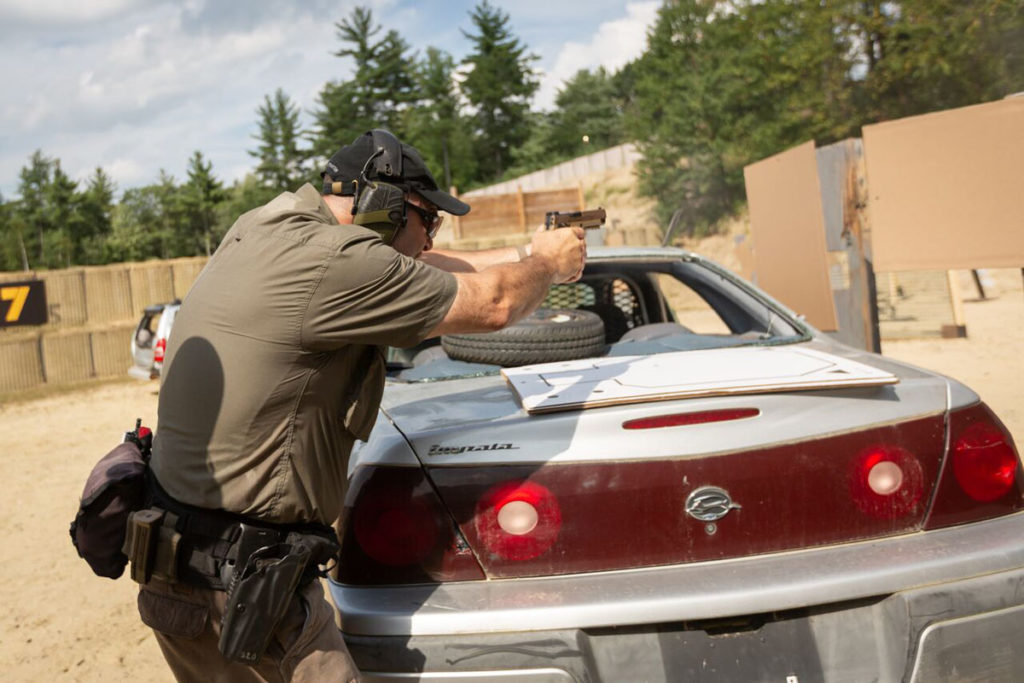 The M17 has a great trigger and good sights; I can’t tell a difference in performance or feel between the M-17 and the P320-M17. The contract specification for the M-17 was shooting a ten round four-inch group at 35 yards with crappy ball ammo which it will do all day. The civilian versions of the M-17 are just as accurate and fun to shoot. I have used a variety of heavy and light bullets in full metal jacket and hollow points. The 320-M17 fed them all. 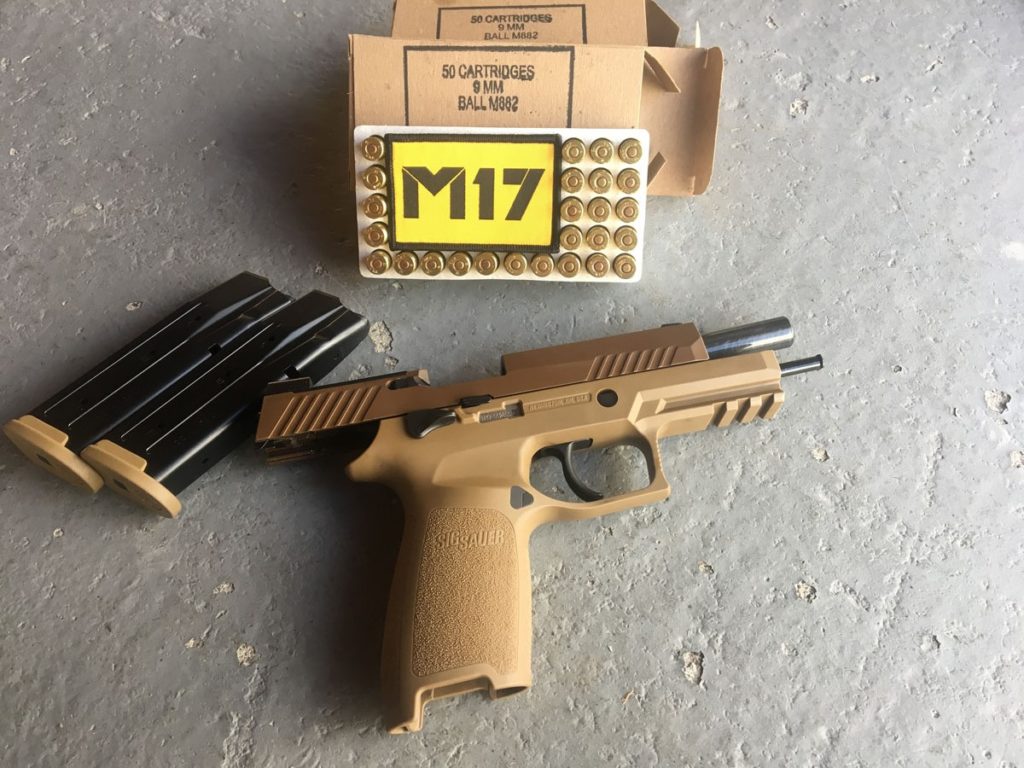 The P320-M17 was reliable and accurate with ball ammo

The feel and the grip angle are like the rest of the P-320 family. The manual safety is ambidextrous and placed so that the thumb rides on it naturally when you assume a firing grip. The ambidextrous slide lock sits right in front of the safety. It takes a little getting used to, but it is ergonomic and easy to use. 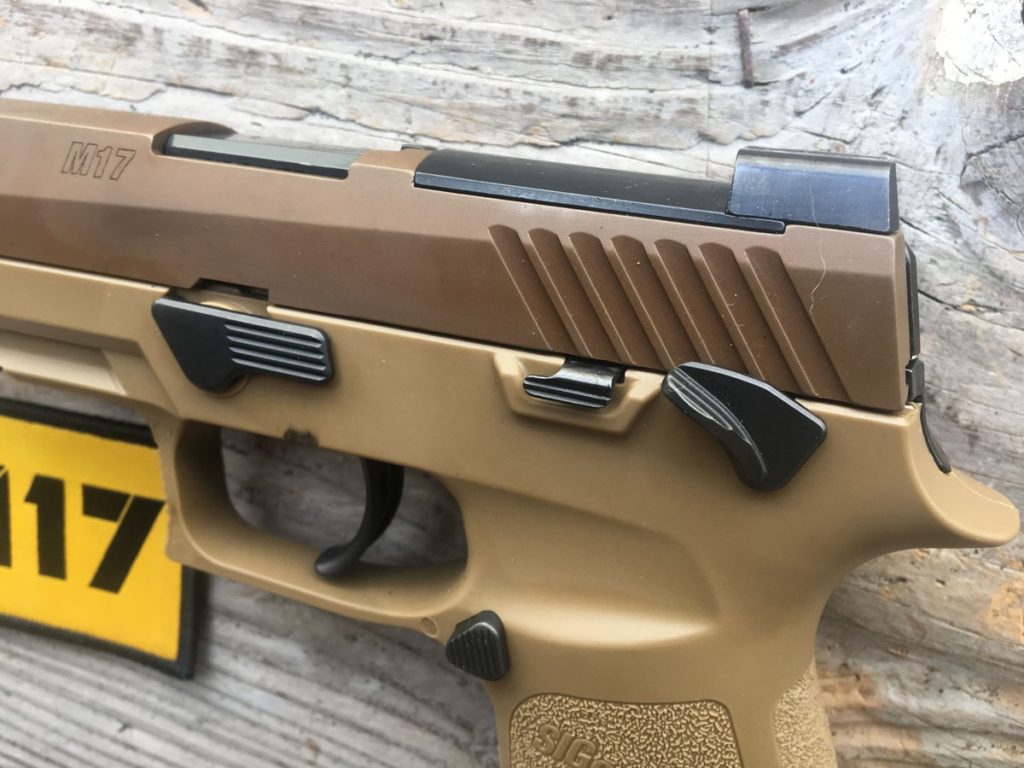 There is some debate about external safeties. The MHS requirements specified a safety and the M-17 delivered. The M-1911 had a well-placed safety, the M-17 is better, inspired by competition modified civilian 1911s. There are a lot of things soldiers do, like individual movement techniques (Google it), which are fundamentally different than police or civilian applications. Military guns get banged and dropped and abused. Some soldiers jump out of airplanes wearing them. With training, a manual safety is no slower and provides an extra layer of protection. Nobody wants to get shot doing a PLF (Parachute Landing Fall). 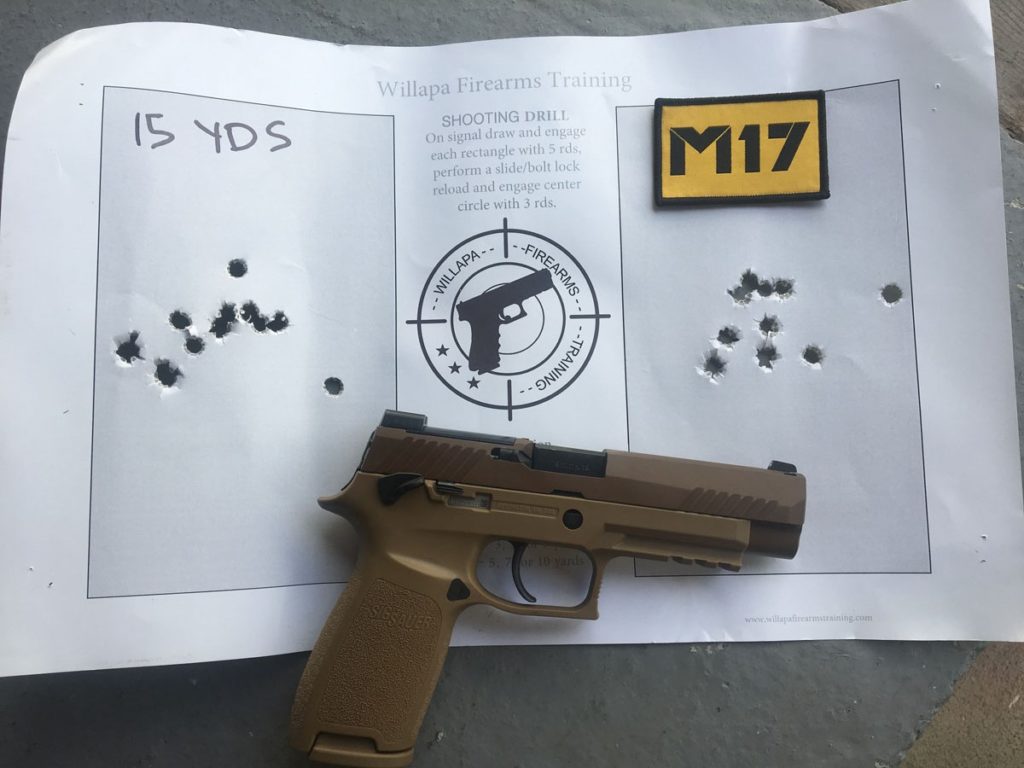 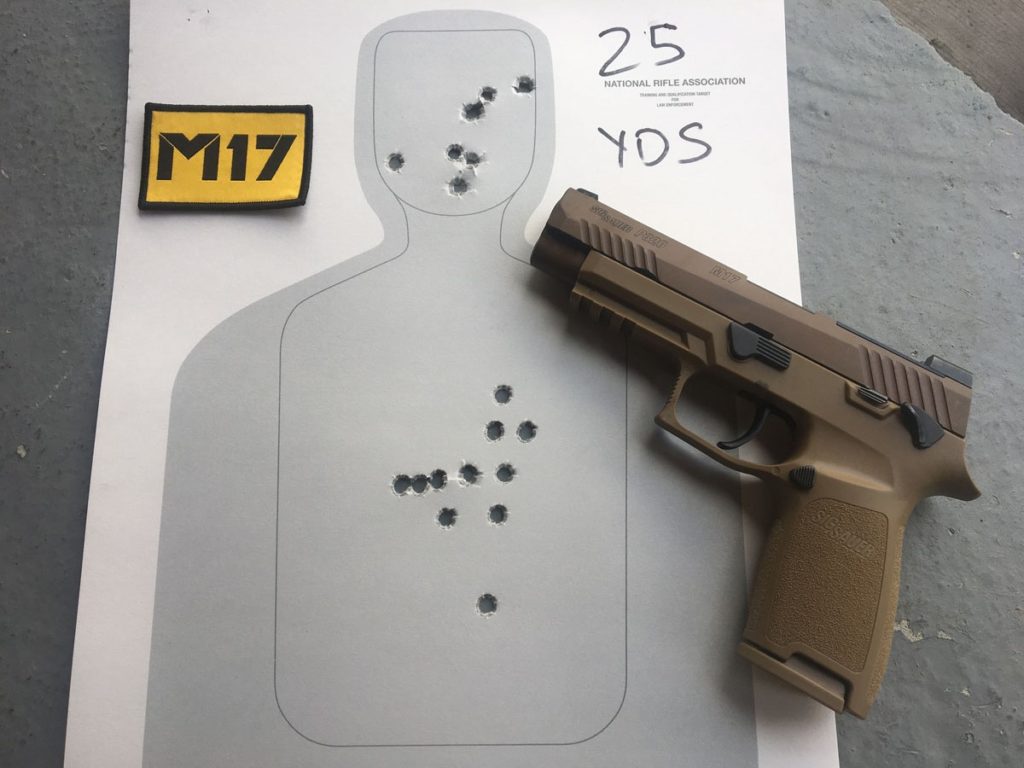 The P320-M17 comes apart like any other SIG P-320. The original specifications for the XM-17 required a special tool to remove the takedown lever. This requirement was changed and now both the Army M-17s and the civilian variants have the same removable takedown lever as the P-320. The military M-17 and the Commemorative require a special tool to disassemble the slide. The trigger modules have the serial number and are completely removable. 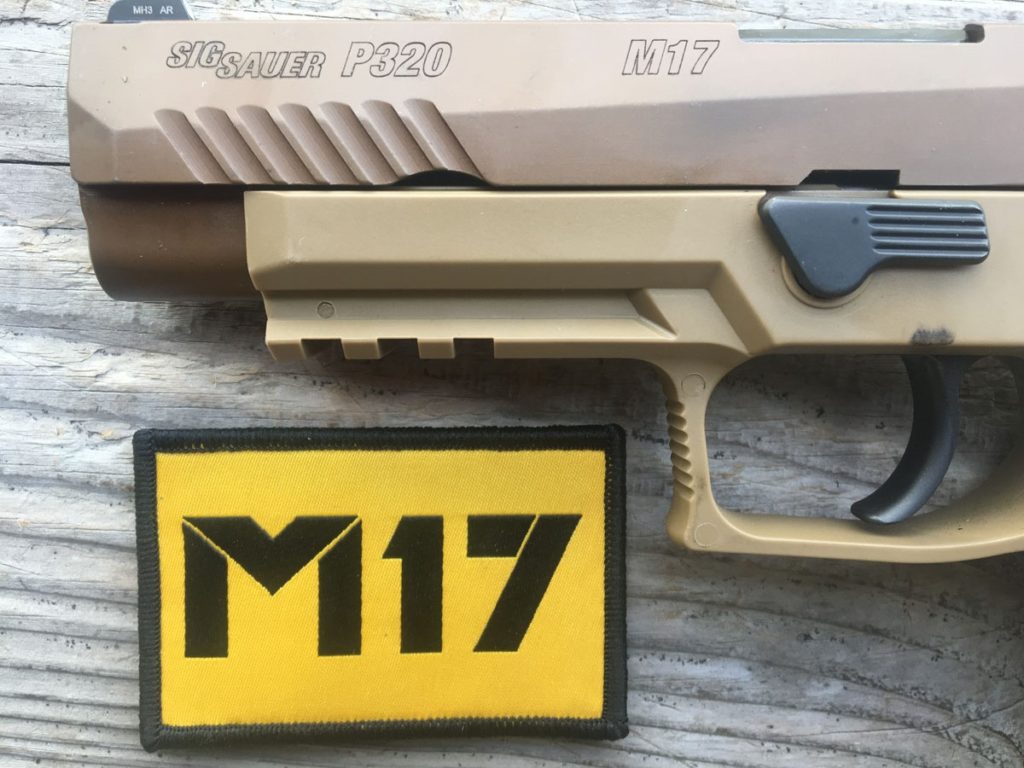 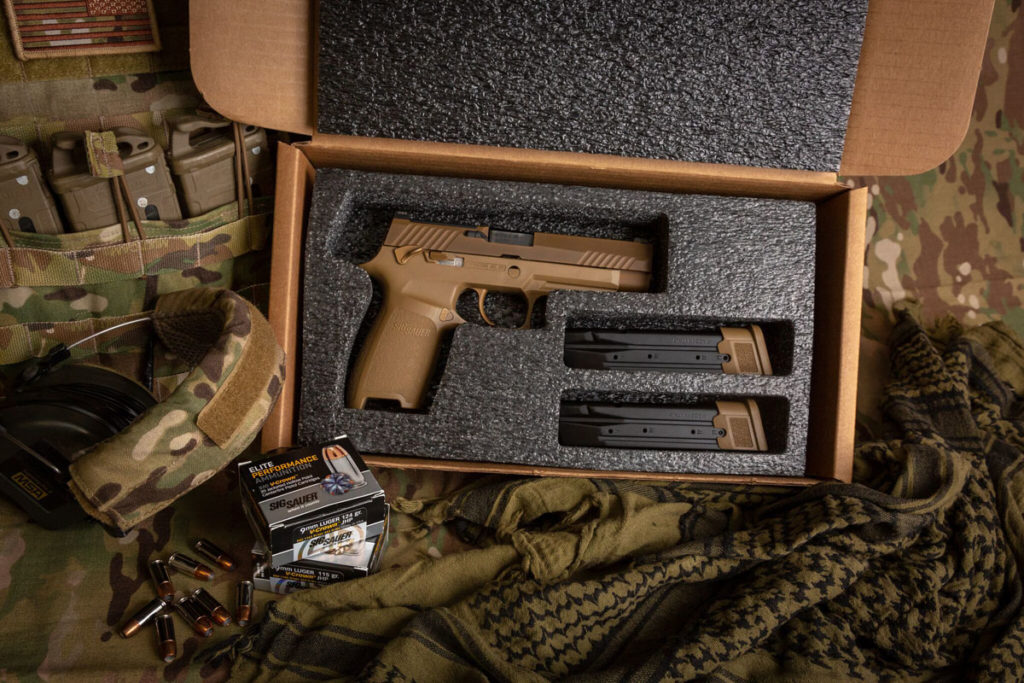 The Commemorative is an exact replica of the first M17s the military got. SIG has made 5,000 available to the public. It even ships in the same cardboard box that the military gets it in.

As a side note, SIG is no longer offering the coyote-tan colored controls, even for the military. So the civilian version of the M17 looks just like what the military is currently getting.

The pistol features a SIGLITE front night sight and removable Night Sight rear plate with the same optic cut as specified by the MHS contract. It comes with two 21-round magazines, one 17-round magazine and a manual safety.

To complement these guns, an M17 Collector’s Case is available separately at sigsauer.com/store.  The case is a solid cherry box, with dark mahogany stain, a tempered glass top, a brushed nickel latch and a keyhole back for optional wall-hanging.  The M17 Collector’s Case features a slate-grey flocked foam insert with an affixed U.S. Army logo, and precision laser placement cuts for the pistol, certificate and Official Challenge Coin. 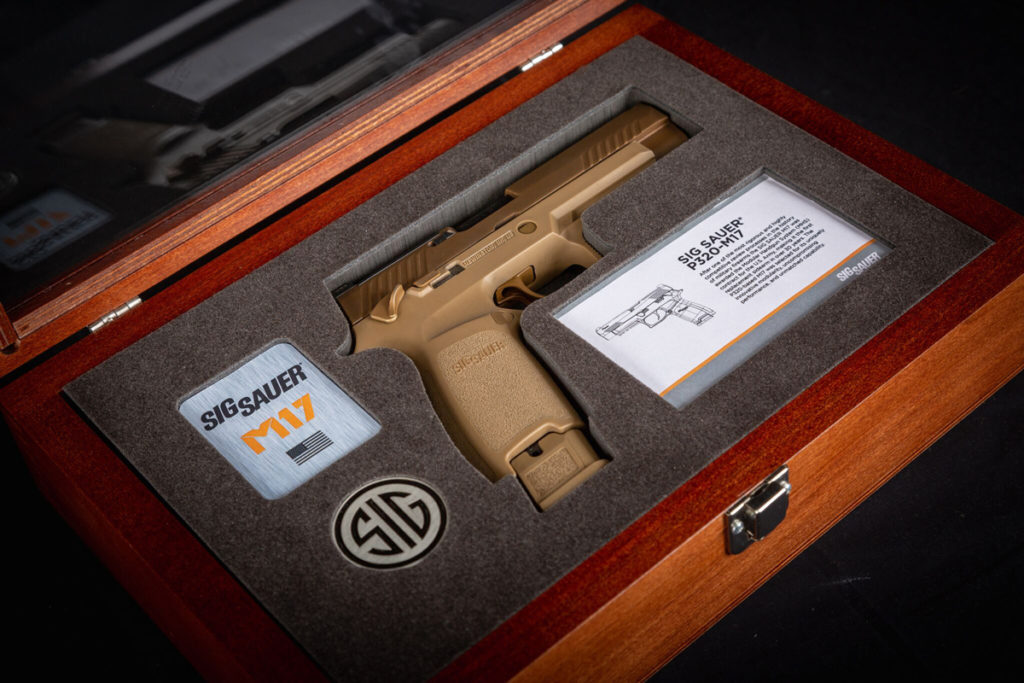 For more information on the SIG M17 visit SIG by clicking Here.

***Shop GunsAmerica for your next SIG handgun***

Previous post: Training Schedule To Win! A Look Into How A Champion Trains