One persons “ultimate” very well may not be another’s, but I think this build should spark more than a little interest. The greatest drawback to trying to do an ultimate build is that “ultimate” will probably cost more than many are willing to spend at one time on an AR, but that’s the beauty of an AR platform, all the upgrades can be done one at a time due to the modularity of AR parts.

Quality ammunition capable of long-range precision is available from several sources to support the building project.

The hot new 224 Valkyrie cartridge was a natural choice for an Ultimate AR build; resulting in a small frame AR rifle that can reach 1000 yards.  A special bolt, barrel, and 6.8 magazines are all that’s different; the rest is the same as any other 223 builds, except I chose some extreme components instead of the common mil-spec.

Luckily I had a few certificates from top of the line manufacturers that I had won over this season. They have my deepest appreciation for their sponsorship and support of the shooting sports. The majority of the remaining parts were purchased from “Ultimate” level manufacturers to build a one of a kind, lightweight, long range AR.

The heart and soul of any AR rifle is the barrel so I selected a Proof Research 18” carbon fiber wrapped unit for this project. I have had fantastic success with Proof barrels in the past. They have provided outstanding accuracy and long life as well as keeping the muzzle end of the rifle light and maneuverable. The 18” barrel should provide enough velocity to reach the 1000 yard mark and still keep the rifle short enough for rapid use and ease of handling. The 1×7 twist should be optimal to stabilize the 88 and 90-grain bullets planned for long range shooting. MSPR- $920 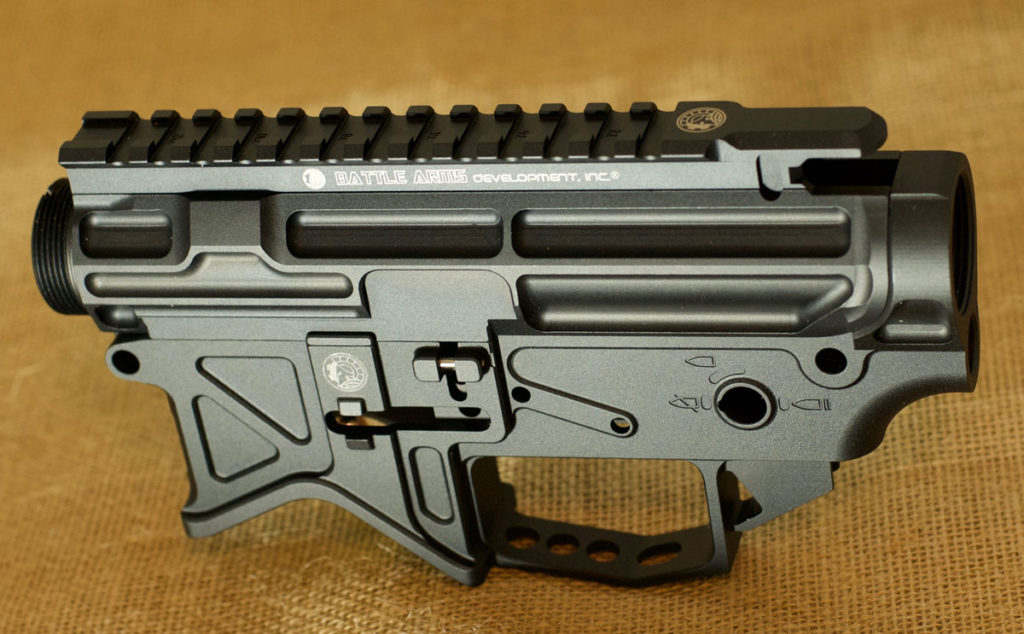 Flawless machining of the BAD receiver set ensures it will not be confused with a mil-spec unit.

A Battle Arms Development (BAD) Light Weight Billet receiver set provides a solid anchor point for the Proof barrel and the rest of the components. The BAD billet receiver is highly machined to lighten it and still provide the structural rigidity while also looking totally awesome.  The magazine well is nicely flared to aid in rapid reloads.  The two billet halves fit together flawlessly and have a tensioning screw to eliminate all play. The milling that is done to accomplish the low weight of this set has to be seen from all angles to be truly appreciated. MSRP- $499

A JP Enterprises Enhanced Bolt strips the Valkyrie shells from the Precision Reflex 6.8 magazines and locks them in the Proof barrel. JP has been a dominating force in performance ARs for decades and has always provided top quality reliable parts far above the standard mil-spec level. MSRP-$153 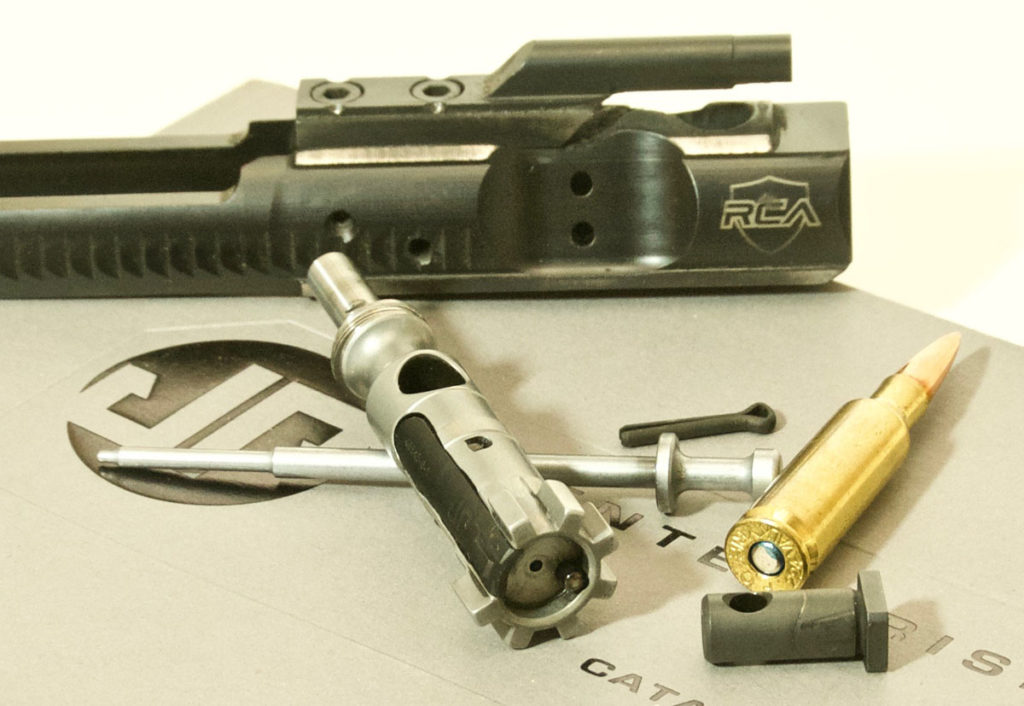 The JP bolt cycles in a Rubber City Armory full weight bolt carrier. These bolt carriers have given me years of service in 3 gun and IPSC rifle competitions without fail. The Black nitride bolt carriers are very slick providing flawless cycling and easy cleaning. MSRP- $170 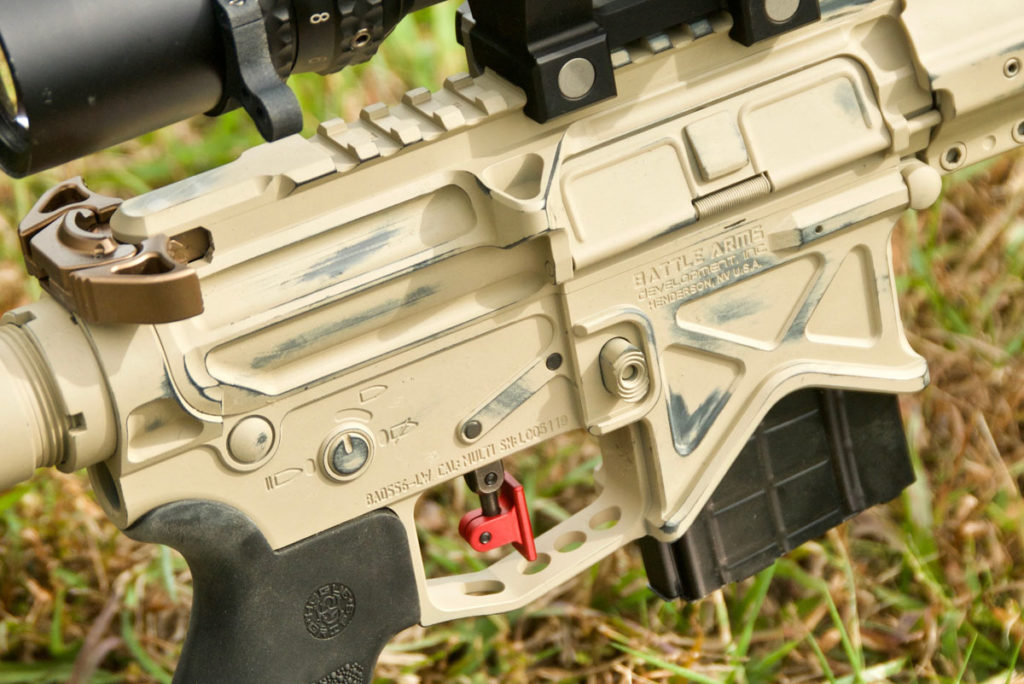 A Timney Calvin Elite trigger is used to create once fired brass and send the bullets on their way. The trigger is advertised as their 1.5 lb pull weight trigger, and they didn’t exaggerate. The trigger broke consistently between 1lb 5oz and 1lb 8oz on my Lyman electronic trigger gauge.

These triggers have a multitude of adjustments and a variety of trigger shoes to fit shooters whims. It isn’t what I would use for a battle rifle, too many things to come loose, but for a target and occasional hunting build it was just what the doctor ordered. It broke cleanly and had a short reset. MSRP- $300 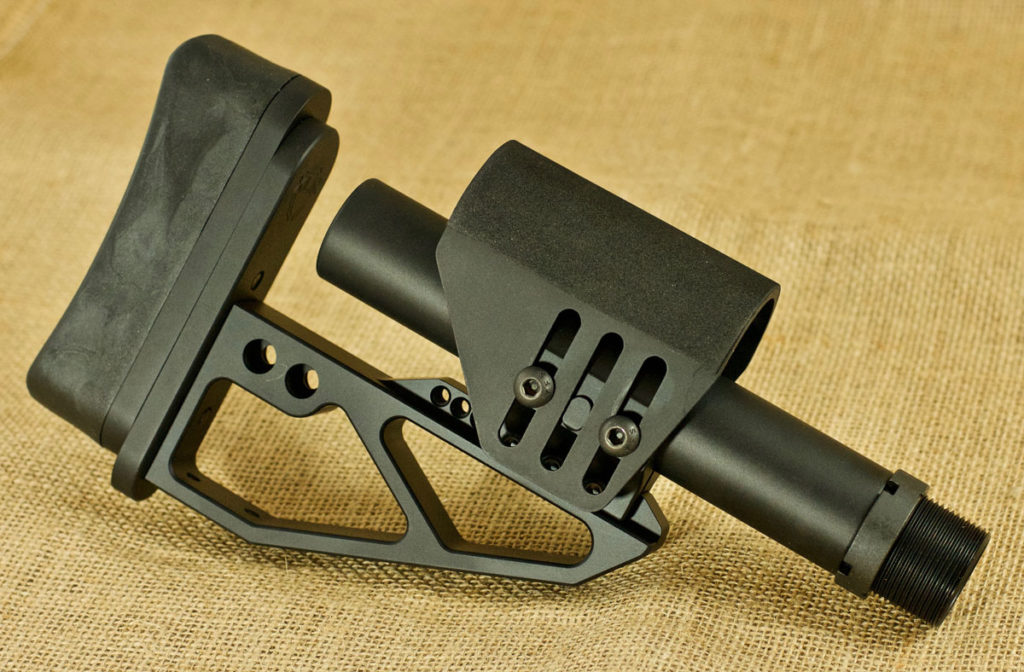 In order to shoot well, a rifle has to fit the shooter and ensure that the shooters eye drops naturally behind the scope. An XLR Tac AR stock is so adjustable that it can accomplish the needed fitting and ensure success. The XLR is adjustable for length of pull, drop, toe angle and has an adjustable cheek rest.

In addition, it is primarily made of machined aluminum to keep it light but is thick enough to keep it solid. Its soft rubber recoil pad sticks comfortably to the shoulder while shooting and eliminates the slip and slide of harder butt plates. This stock would be a great addition to any AR, whether for plinking, long range or 3Gun competition. It’s a great combination of simplicity of design and flawless function. MSRP- $225

A Hogue Monogrip provides a secure hold for the trigger hand. This rubber over-molded grip doesn’t have any finger grooves or thumb rests that always seem to fall in the wrong place for me. It’s simple, straightforward and works for right or left-handed shooting. MSRP- $26.95

The 15.5” Odin Works Ragna handguard provides plenty of room for the support hand to a secure grasp on the business end of the rifle. The Ragna is wildly milled out, leaving more air than aluminum. The 6061 aluminum handguard weighs in at a fluffy light 9oz and with the milling allows a great view of the Proof carbon fiber wrapped barrel.

The 1 ½ thickness of the handguard has a great look and great feel, providing plenty of room for mounting a bipod or other accessories. I did have to remove a very small amount of material inside the handguard to clear the front corner of the adjustable gas block since I went with such a long handguard. MSRP- $179 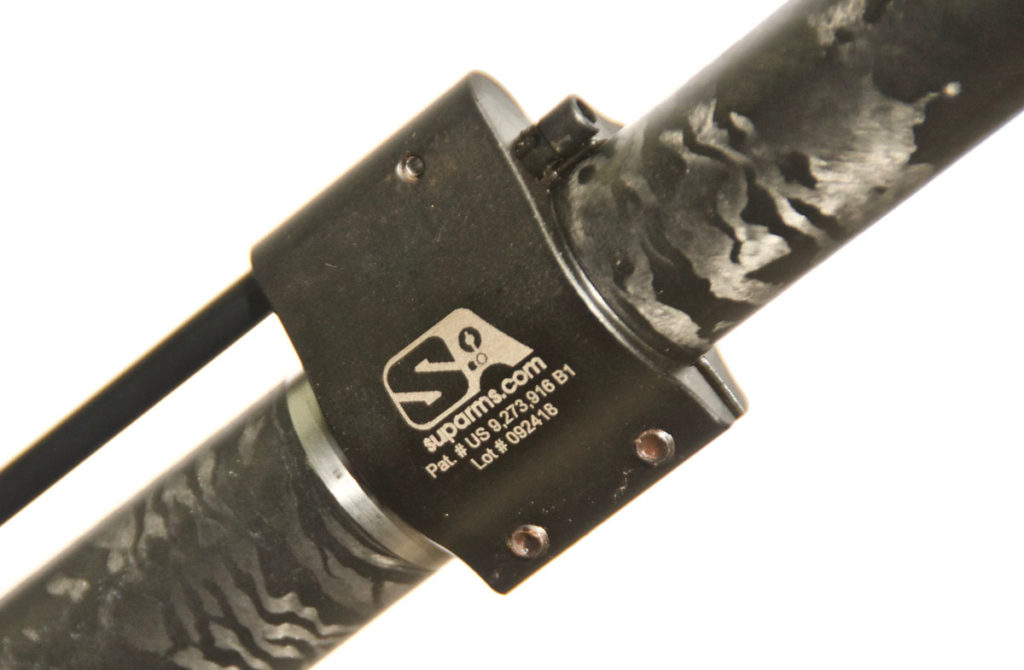 Clamp-on gas blocks impart less stress on the barrel than those using set screws into the barrel.

I used a Superlative Arms adjustable “Bleed Off” gas block to restrict the flow of barrel gas back to the bolt as I figured an Ultimate build deserved to also sport a suppressor. A suppressor provides more back pressure than a non-suppressed gun so throttling it minimizes over gassing. The SA gas block design has an automatic lock to keep the adjustment in place and eliminates the possibility of the adjustment screw working its way out or stripping out. MSRP- $99.95

Checking the weight of the rifle as it approaches completion of the build; the 18” barreled AR with a full weight bolt carrier group and a fully adjustable stock tips the scales at a light 6lbs 11oz.

I added a Gemtech Trek-T 556 to finish of the end of the barrel, reducing both the noise and the recoil down to minimal levels. The titanium suppressor keeps with the lightweight approach of the build and weighs in at a mere 11oz. Due to the weight savings of the carbon fiber barrel and radical handguard, even with the addition of the suppressor, it still balances like a standard AR.

To make this rifle reach its true potential it needed a scope capable of reaching the same distances with clarity and precision. However, I didn’t want to put something so big on it that it totally overwhelmed the rest of the rifle.

The Nightforce ATACR 4-16x F1 seemed like a fitting choice. It has a 34 mm diameter tube allowing wide fields of view and excellent light transmission. The H-59 reticle allows rapid holdovers for distant shots and shot corrections, both good features to have on a low recoiling gas gun.

The scope turrets also track accurately for dialing elevation for those long shots. The scope sits in a Nightforce mount lifting it up to the proper height for mounting on an AR platform so only small cheek piece adjustments were needed on the XLR stock. MSRP- $2425

Accuracy– Since this was to be the Ultimate Valkyrie it warranted taking the shooting beyond normal 223 distances. I wanted to stretch testing out to the challenges of 1000 yards but range access, weather, and deadlines just didn’t allow it. Most testing was limited to the 500 yards available locally. 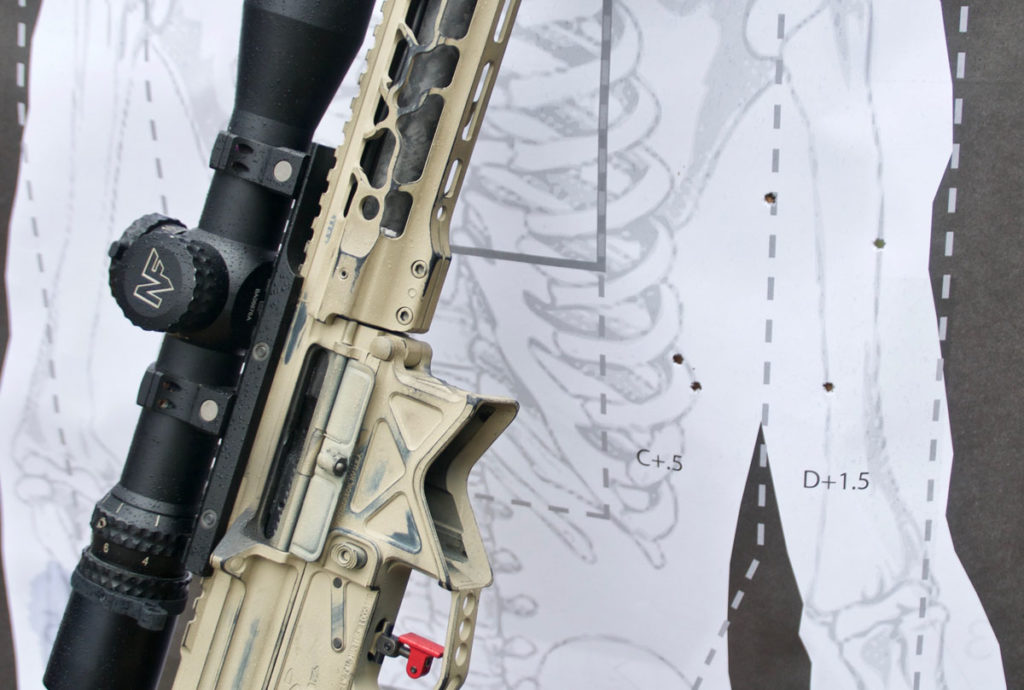 Odin Ragna handguard allows mounting accessories on top or bottom of the rail.

However, one trip did allow hitting steel out to 900 yards but didn’t allow access to perform repeated groups at the extended distances. Hitting the variety of steel targets out to 900 proved boringly easy and the gun was an absolute pleasure to shoot. 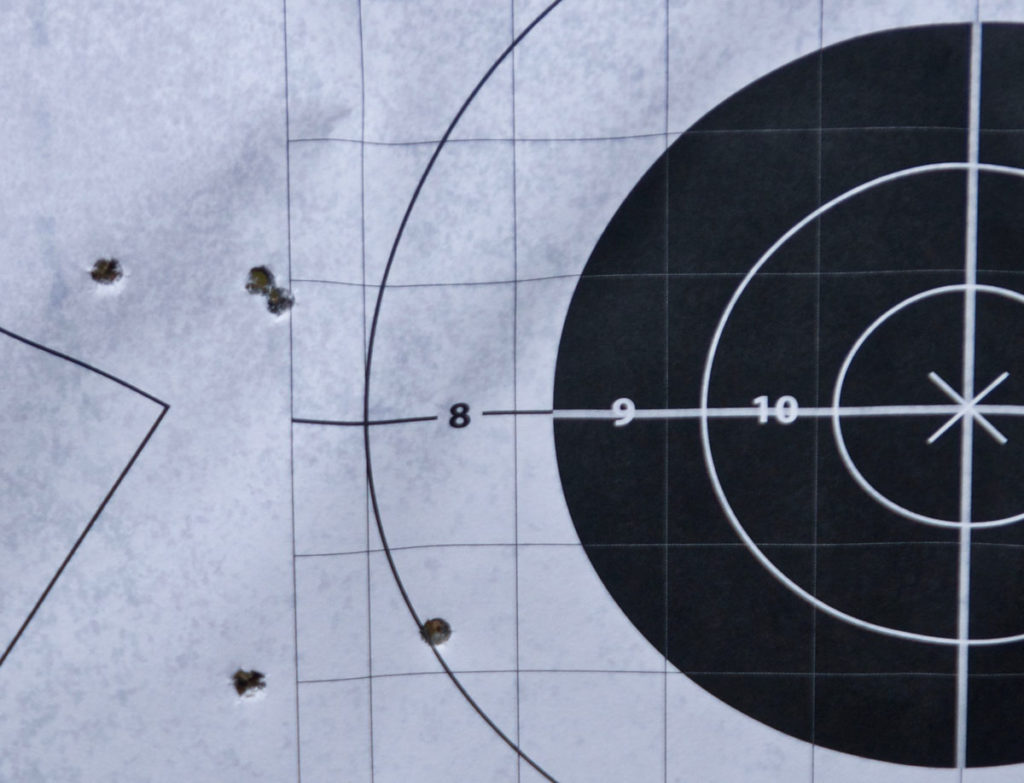 With the suppressor quietly removing recoil, a fantastic clear scope, a fine fitting stock and a light trigger shooting this gun was a joy. Testing was done with both the Federal 90 grain ammunition and with Hornady 88 grain ELD-M’s. 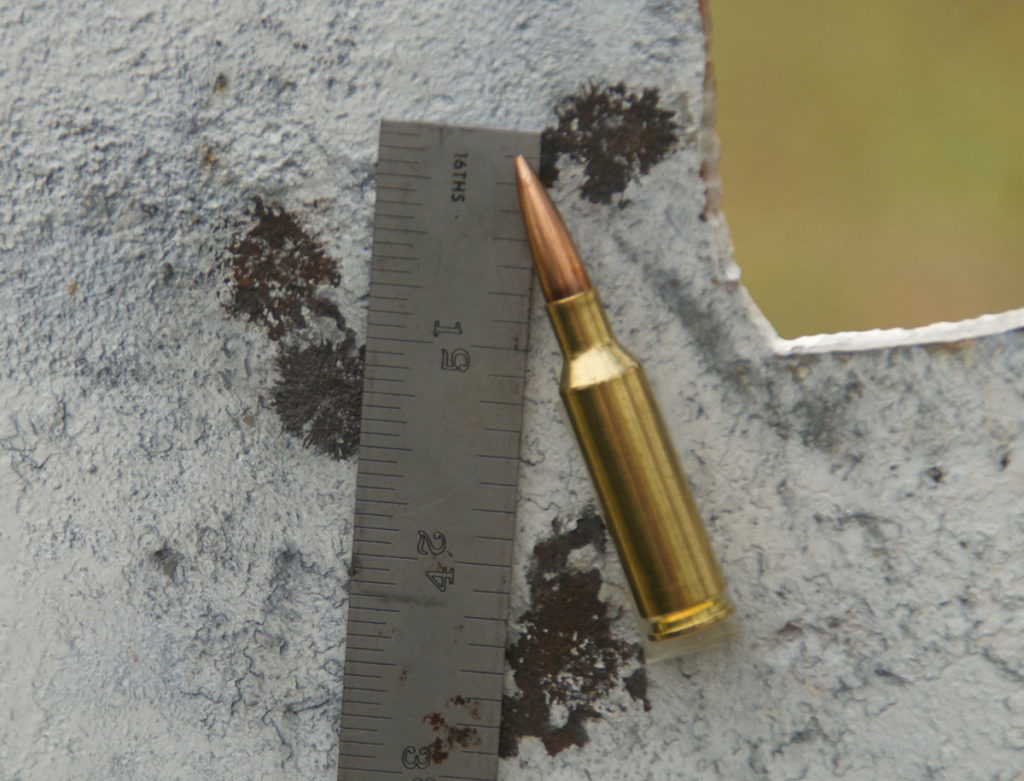 Groups ranged from right at ½ moa to 1 moa depending on the wind and weather conditions during the shooting sessions at ranges from 100 to 500 yards. Both brands of ammunition fed flawlessly into the Proof barrel from the Precision Reflex magazines.

I couldn’t have asked for better performance, but I guess that’s what you should expect from top-line components, and of an Ultimate Build. As with many things in life you get what you pay for.

The weight and the balance of the rifle are incredible, with the complete package weighing in at 9 ¾ lbs. The scope accounting for a high percentage of the weight, but if you can’t see 1000 yards you can’t hit there either. The balance point was right at the forward takedown pin, giving the rifle a very neutral feel, making it feel lighter than it is.

So the build turned out to be a sub 10lb AR with proven capability of hitting targets to at least 900 yards. The next stop for this setup will be a local PRS match and the field for some coyotes. The 224 Valkyrie cartridge definitely extends the boundaries of the small frame AR and makes for great fun at extended distances; I would love to try this out on a prairie dog hunt out west.