Thureon Defense’s 10mm Carbine is NOT An AR15! 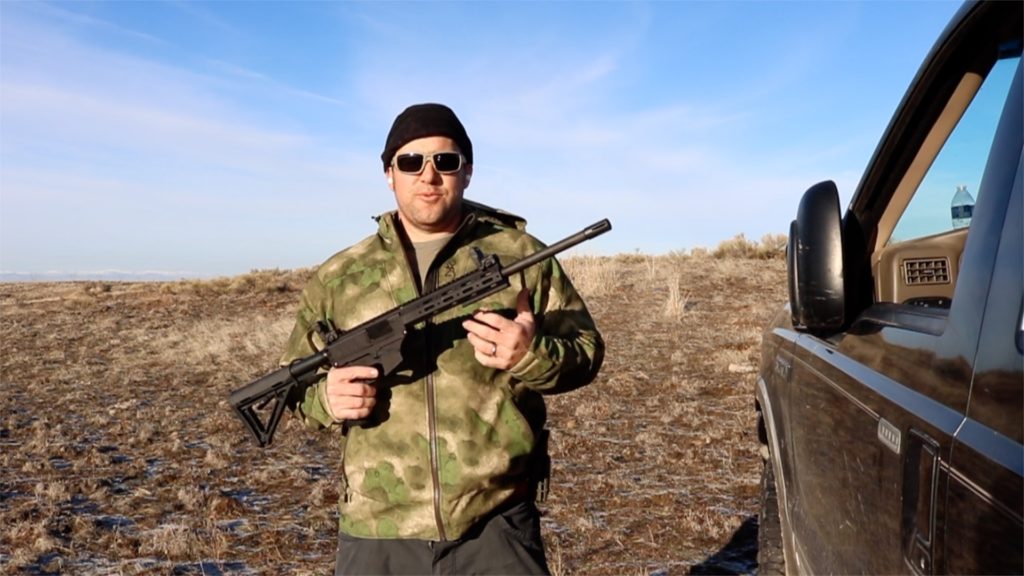 Author, with the Thureon Defense 10mm

It has been an excellent year for us 10mm Cultists, our cartridge of choice has grown by leaps and bounds. New guns, a gaggle of new factory loads, and an upswing in popularity have made 10mm more available than ever. With so many options, I felt compelled to write a post on alchemy write a review of available factory ammo and how it performed in the real world. A test like that requires, obviously, a gaggle of available pistol barrel lengths. But in my opinion, it should also be done from a carbine, as the 10mm gains so much from a rifle length barrel. So I went looking for one. And to the lasting shame of the firearms manufacturing world, I found very slim options. 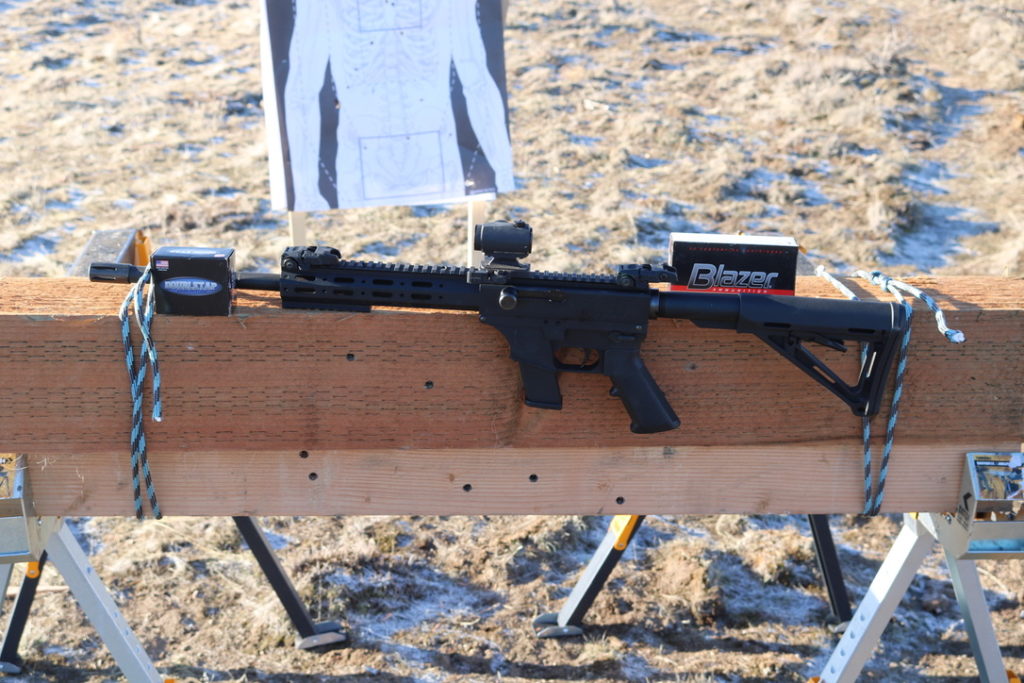 Construction materials were harmed in this gun review

If you were reading Guns America around SHOT Show 2018, you know this isn’t the first time I have called this out. As of January last year, after the big industry “ This is our new hotness” show, your options were two. A Kriss Vector, and of all things a Hi-Point. Not counting the 80’s era MP-5 models chamber in 10mm, which I would say are difficult at best for a civilian to purchase. Unless maybe they sold them off as part of Fast and Furious, which I wouldn’t put past them. Anyway, the options in 10mm are few. 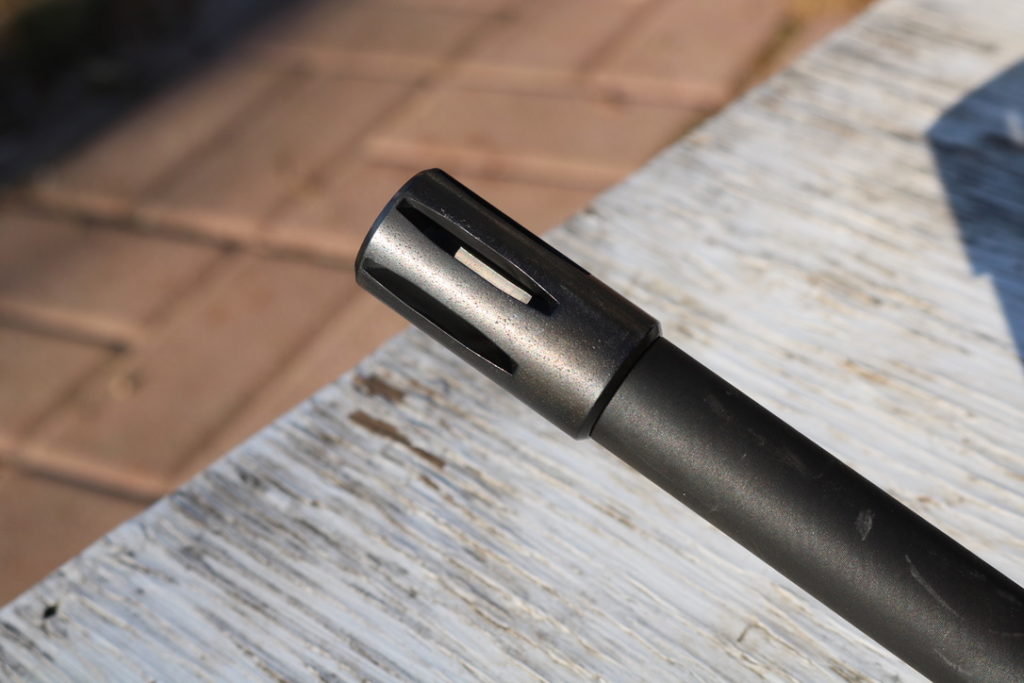 Which is something I don’t understand? 10mm is a near perfect round for a sub gun or PCC (Pistol Caliber Carbine), as the kids call them these days. You have a serious velocity gain due to barrel length, as the longer barrel gives you more complete powder burn. While 10mm can be sporty in a pistol, at least at full power, the rifle tames it very nicely. 10mm is considered snappy in a hand cannon, but no one would compare it to rifle loads or 12 gauge high brass. Not only can you turn the velocity up with all the metal of a rifle, but you can also turn it down for specialized applications. 10mm at a subsonic speed not only shoots a projectile as heavy as a 300 AAC, but it also makes a bigger hole. 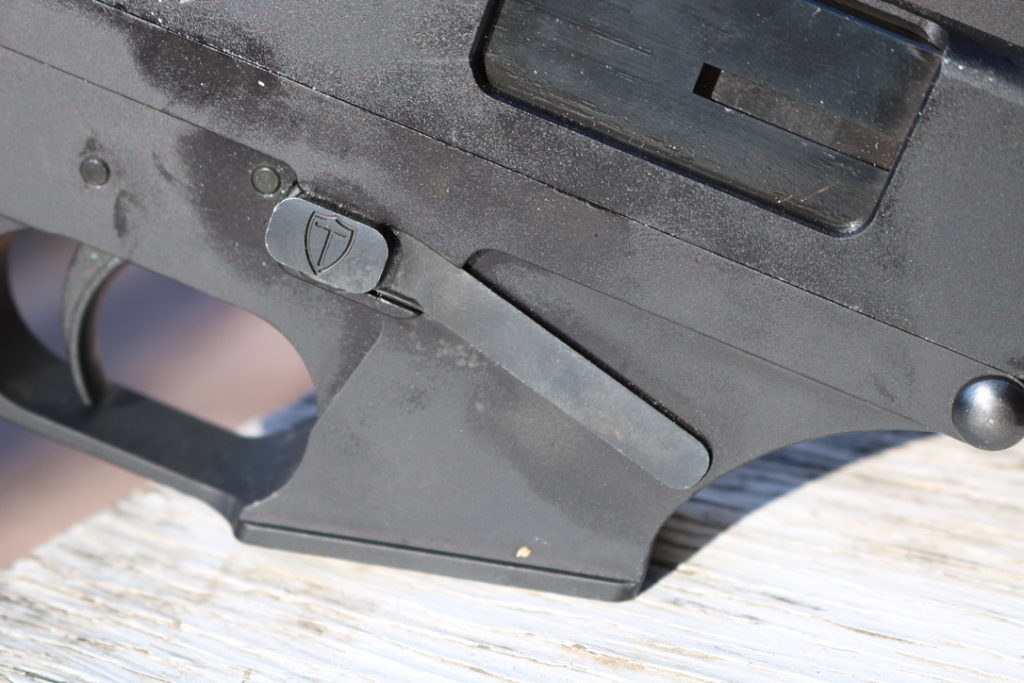 So as I was hunting around for a 10mm Carbine, I was very happy to stumble across Thureon Defense. I had never heard of them, but I was intrigued. It turns out Thureon is a smaller company out of Wisconsin, specializing in PCC weapons. Veteran owned, they set out to do one thing, and do it very well. In a world of 9mm only carbines, Thureon offers options. 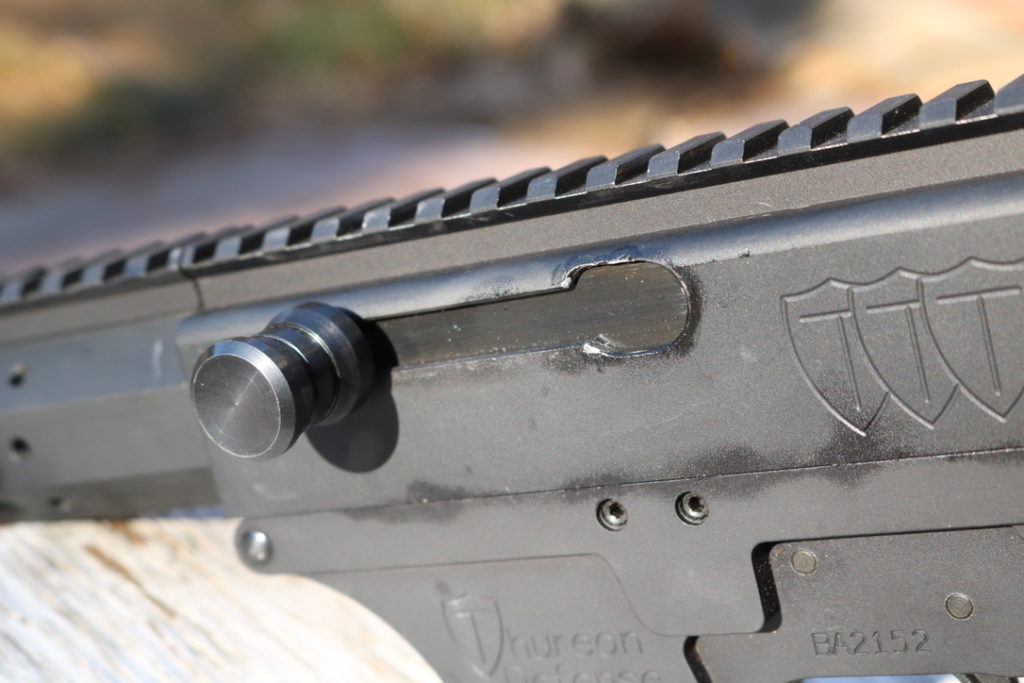 Thureon models are side chargers

Currently, everything Thureon makes is available in 9mm, 40 Smith and Wesson, 45 ACP, and 10mm. I said in the 10mm ammo video that they used a variety of magazines according to your sidearm, but that has changed. For 2019, Thureon has settled on Glock Magazines. This is a solid move, as Glock is rapidly becoming the PCC industry standard. Glock brand, as well as aftermarket brands, are both plentiful and available in a variety of capacities. 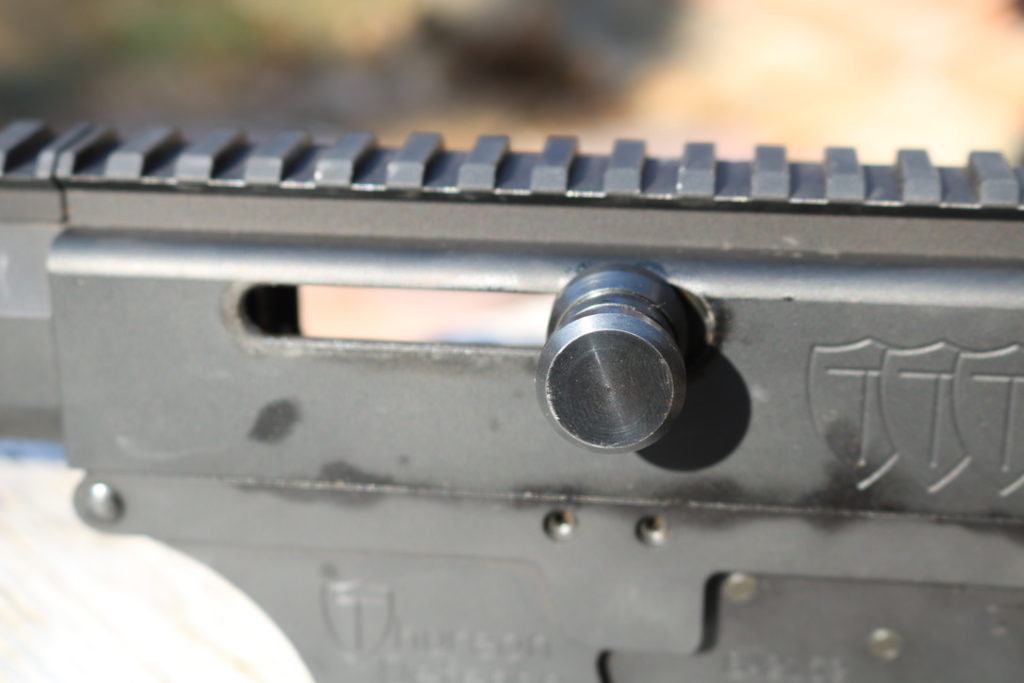 The Carbine itself shares a lot of design features with the AR platform, which is good. It yields familiar controls, plentiful buttstock, pistol grip, trigger options, and familiar shape. One of the things I have grown to like, however, is that it isn’t just an AR forced to take pistol bullets. 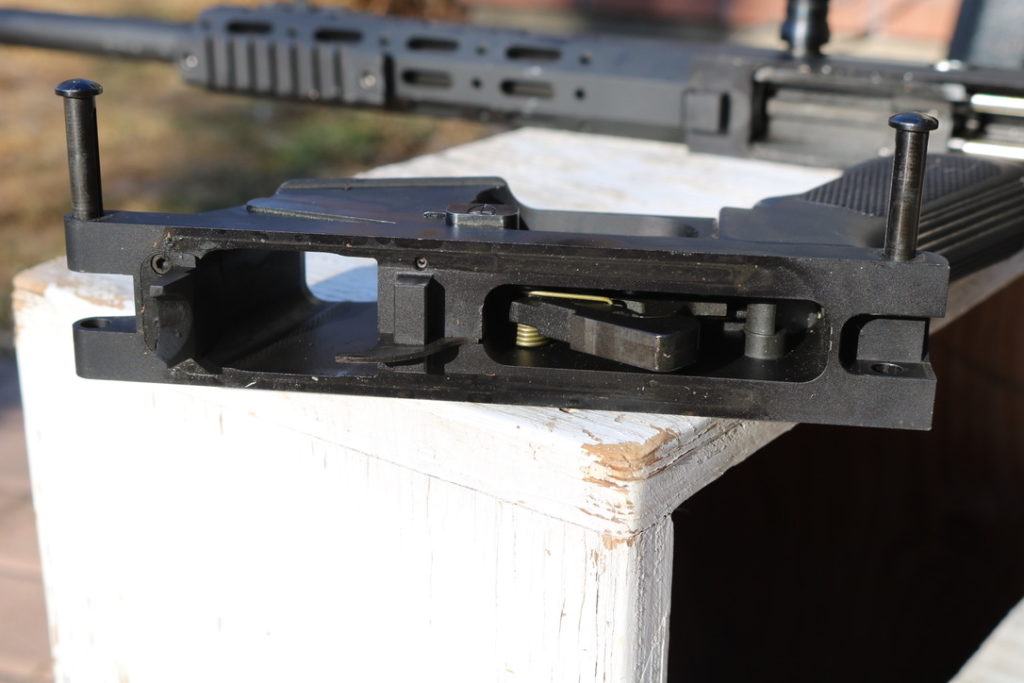 upper and lower side view

I like AR-15’s and I’m sure you do too. But it is not the end all be all of design. Over the years, I have seen both good and bad AR to pistol adaptations. Thureon obviously has too, because they set out to fix the problems inherent in that equation. 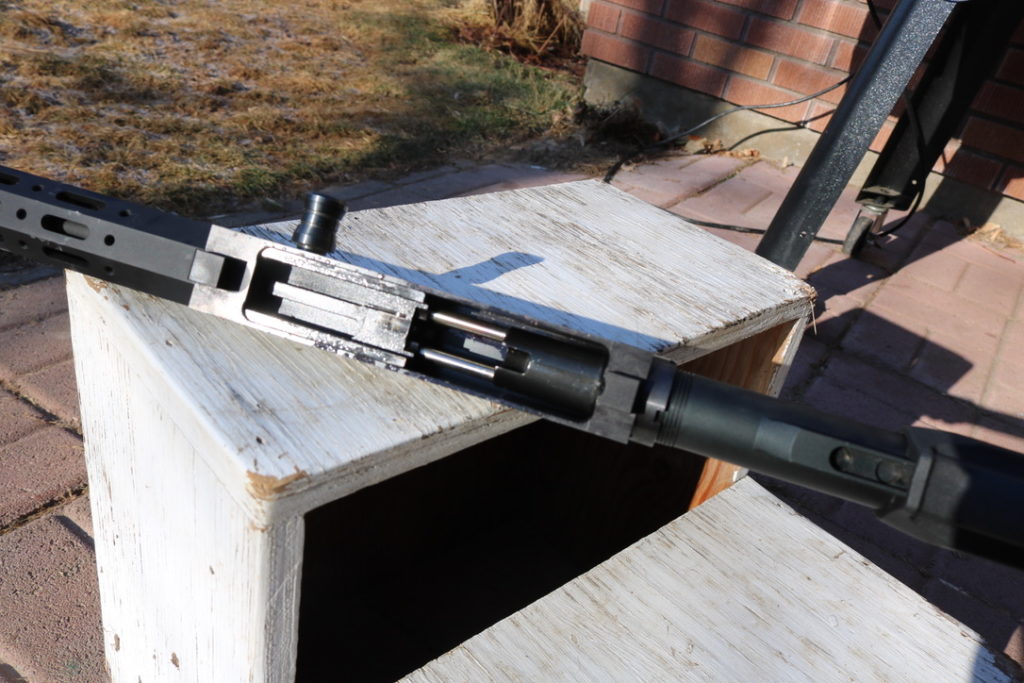 Upper side view. Note, the stock is part of the upper.

“Looks the same” isn’t the same as “is the same.” Sans the parts mentioned above, the Thureon is its own weapon at the core. Instead of a standard upper/lower set, Thureon designed a unique setup. The upper houses the buffer tube attachment, bolt, and barrel. The lower comes off with something similar to AR takedown pins, but smaller. The lower comes free like a 240G with just the trigger group and mag well. It looks weird if you are accustomed to AR’s only, but part of making the system work. 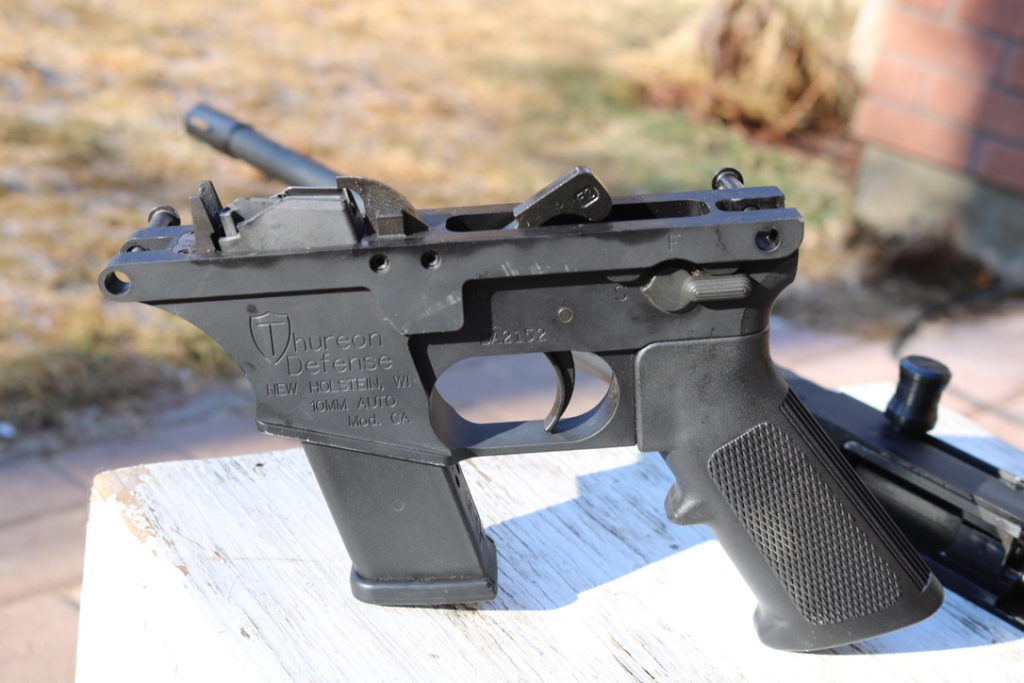 The lower has another unique feature. The feed ramp is bolted into the lower. Rather than being part of the barrel, the Thureon feed ramp is a stand-alone part. It fits in the lower with two screws. The ejector is also in the lower and looks more like a pistol ejector than anything else. 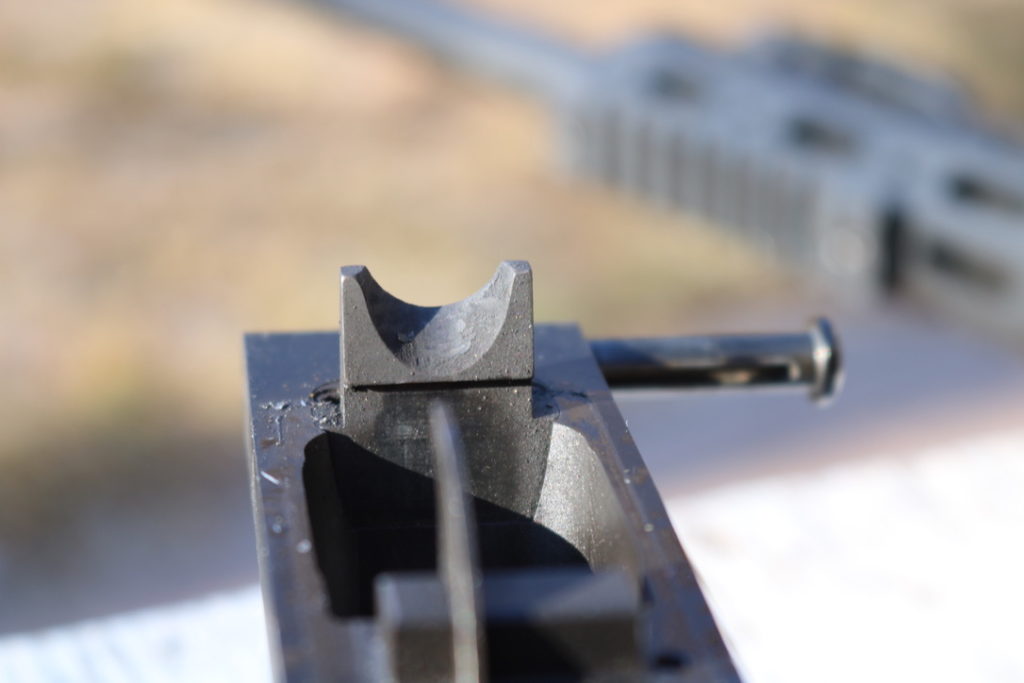 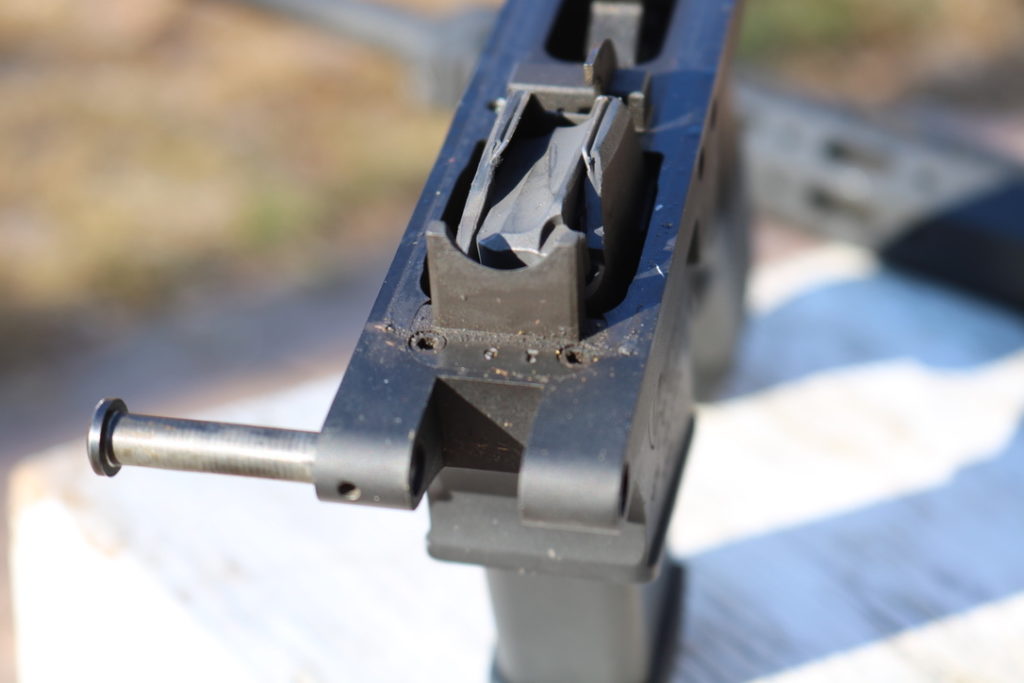 Instead of an AR style charging handle, the Thureon again steps outside the box. Their model is a side charger. Like many PCC models, you don’t get bolt lock from the magazine. But the Thureon does have a simple solution. To lock the bolt open, all you have to do is press toward the receiver on the bolt handle, with the bolt pulled to the rear. An excellent set up both for utility, and competition. It eliminates the awkward bolt hold back for the RO to clear your gun if you are playing PCC games. 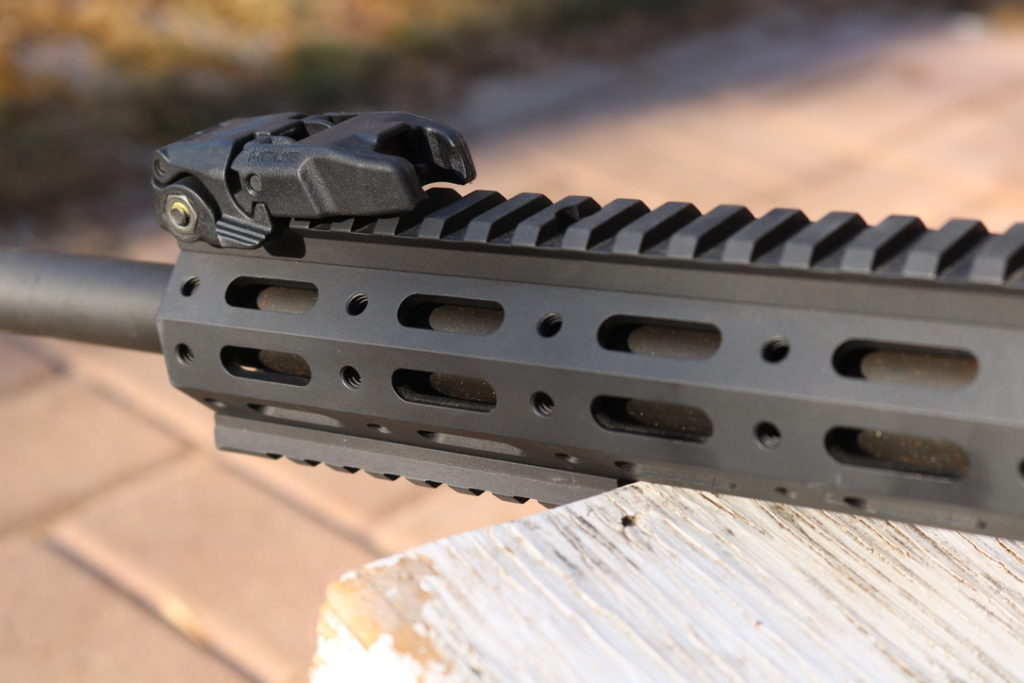 With all those in house designs, how does it work? Glad you asked. First of all, Thureon sent me a demo gun, not a new one. I prefer that in a gun review because it tells me a few things. One, the gun will hold up to more rounds than the few hundred I test it with. Especially with high power rounds, you learn a lot more from a banged up loaner gun than a new one. Two, a lot of things will work well for a while then stop working well. I know this gun wasn’t custom tuned to make a sale, hand built by the master tinkerer. 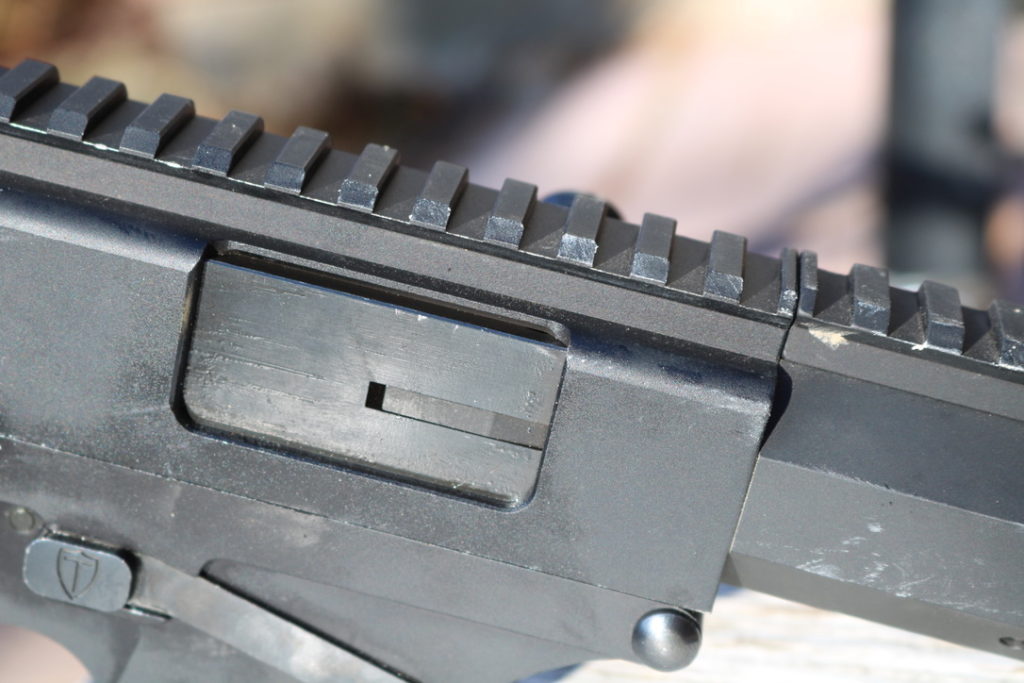 bolt on the ejection side

And run the Thureon did. Already dirty, I didn’t clean it because that is for suckers. With a fresh coat of lube, the Thureon took everything I threw at it, in a wide variety of weather conditions. It was down to 16 degrees during the ammo test, an average of 30 for the Thureon full review. I was also able to feed this carbine way more than a normal amount of test ammo. 17 Brands in fact. 230 grain down to 180 light loads, it fed them all. 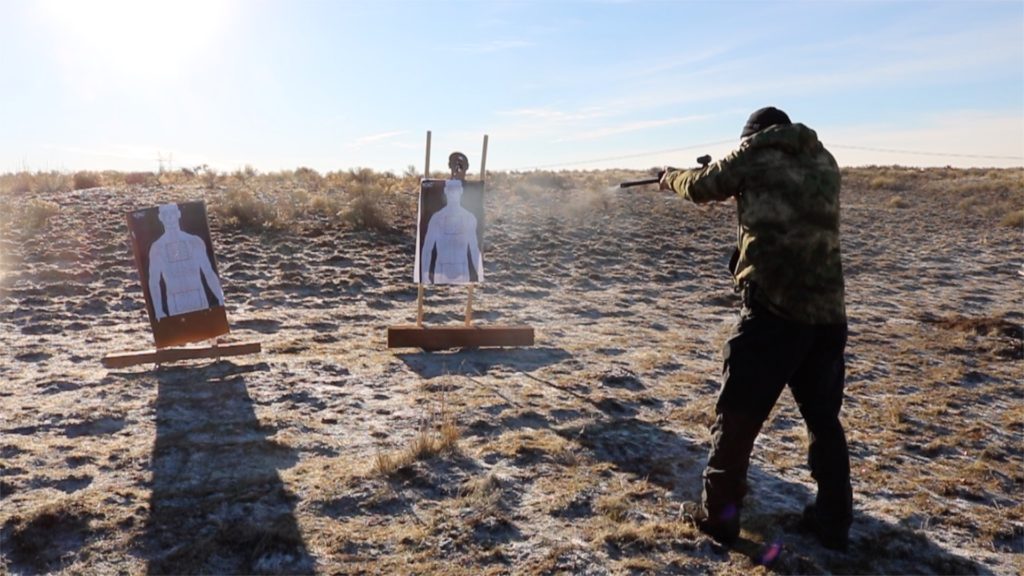 A joy to shoot

Recoil wise, the Thureon unique recoil system handles 10mm very well. Yes, 10mm isn’t 308. But it also says a lot that they can balance the gun to eat heavy to light 10mm and still eject and cycle reliably. Even in a carbine, the 10mm is a little punchier than 9mm. Thureon’s rifle stayed on target, allowing strings of fire easily comparable to 9 in terms of split seconds. 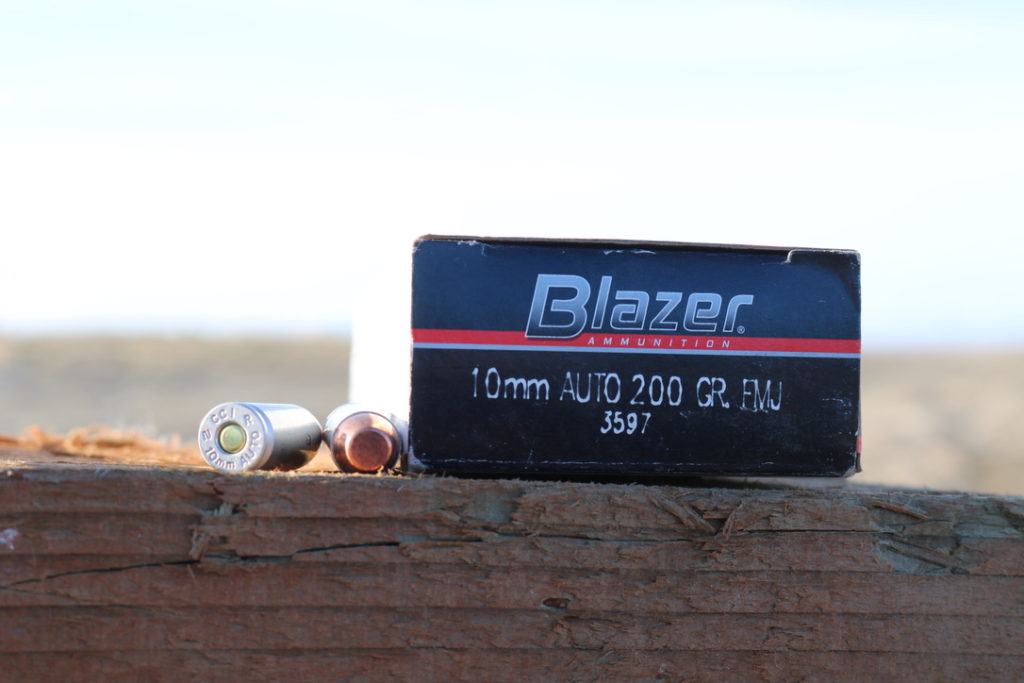 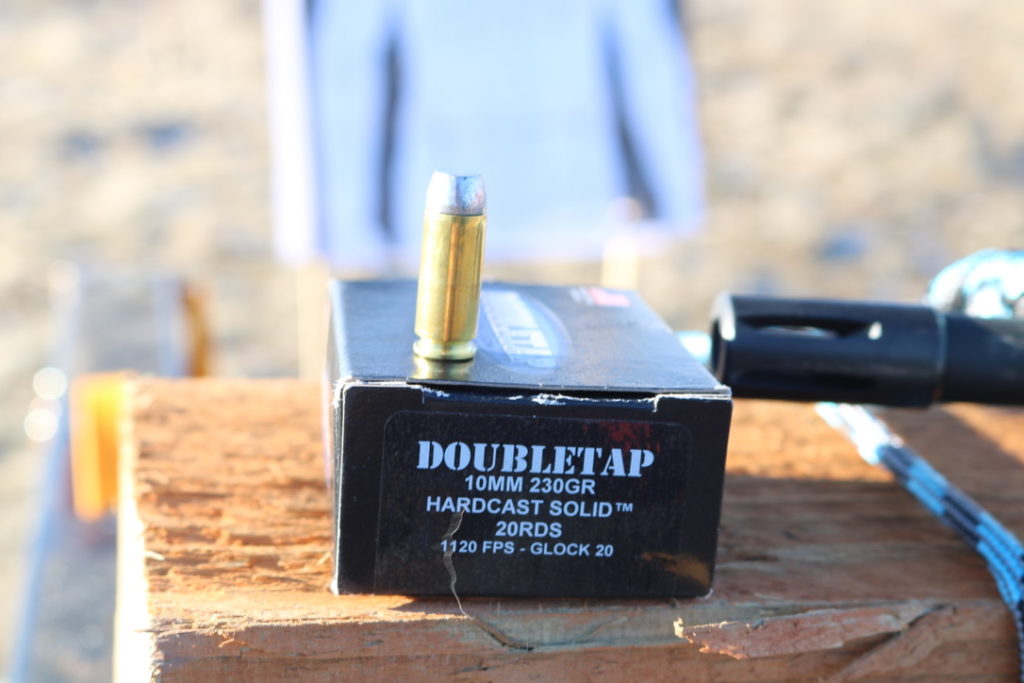