The Universal Phobia: Being Afraid To Kill Despite Training, Bearing Arms 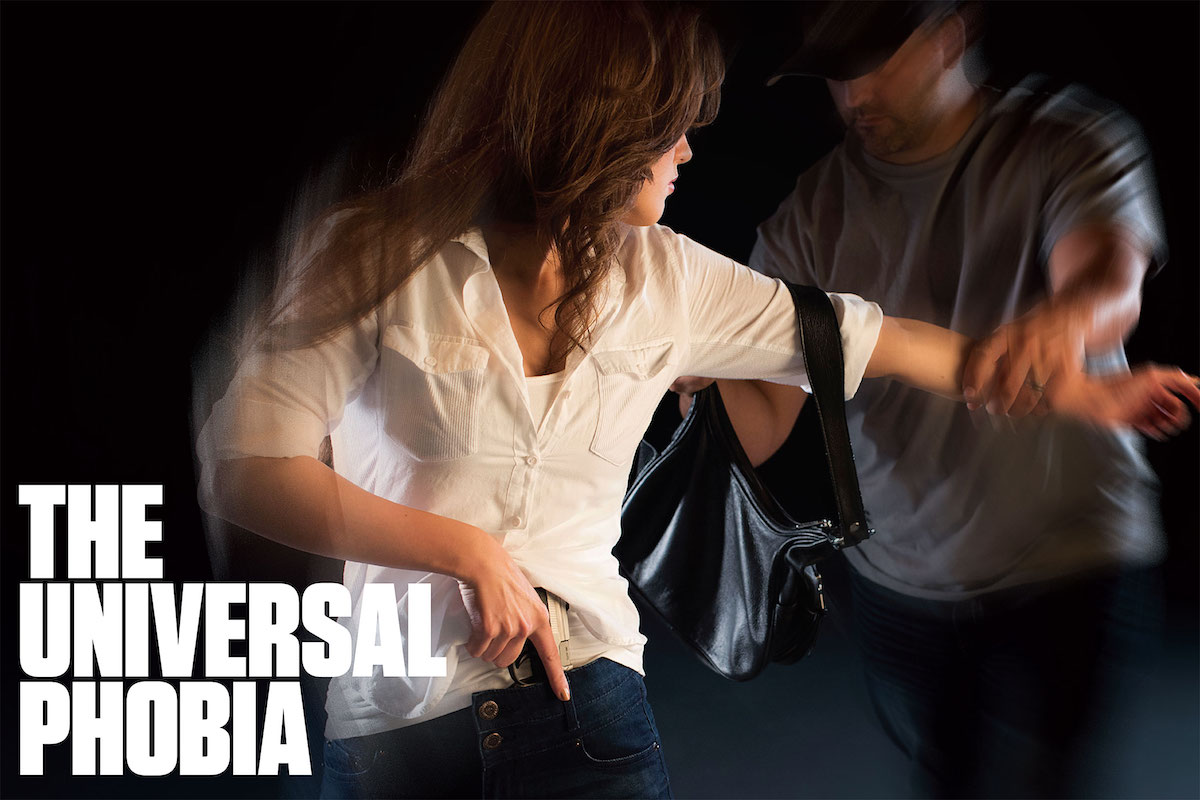 Editor’s Note: The following is a syndicated article by authorRick Baratta that first appeared in USCCA’s Concealed Carry Magazine Volume 13, Issue 7, October 2016 under the title, “The Universal Phobia.”

It stands to reason that if someone is attempting to kill you and you have a loaded gun, you will use it to stop the lethal attack. Right? Well, maybe.

This assumption was challenged by Brigadier S.L.A. Marshall in his book Men Against Fire, written in 1947. Marshall was an official army combat historian during World War II. He conducted hundreds of interviews of enlisted men and officers regarding their combat experiences. He favored the group interview, where he would gather surviving members of a front-line unit together and debrief them on their combat experiences of a day or two before. These after-battle interviews revealed that 15 to 25 percent of front-line riflemen did not shoot at the enemy, even when attacked.

“In an average experienced infantry company in an average stern day’s action, the number engaging with any and all weapons was approximately 15 percent of the total strength,” he noted. “In the most aggressive infantry companies, under the most intense pressure, the figure barely rose above 25 percent of the total strength from the opening to the close of action.”

Marshall also recorded interviews during the Korean conflict and found that the firing rate had increased to 50 percent. Still, half of the soldiers did not fire their rifles at the enemy.

“We are on infirm ground when we hold to the belief that the routine of marksmanship training and of giving the soldier an easy familiarity with his weapon will automatically prompt the desire to use the weapon when he comes under fire,” he said.

“‘After the battle of Gettysburg, 27,574 muskets were recovered from the battlefield,’ Lord wrote. ‘Of these, nearly 90 percent (24,000) were loaded. Twelve thousand of these loaded muskets were found to be loaded more than once and 6,000 of the multiply loaded weapons had from three to 10 rounds in the barrel. One weapon had been loaded 23 times.’”

If we agree that these figures tell a more than interesting phenomena, a question must arise — “why?”

OLD AS THE HILLS

This cannot be a recent observation since man has been engaged in war back to our earliest civilization. The fact is that it has not been discussed; the losing side does not write history, and the winners cannot be bothered by what they must have considered an irrelevancy. They won, so what does it matter?

Man has an aversion to killing man. Society, culture, morality and religion all speak against it. Of course, society allows killing while in defense of one’s person, family, home or even a stranger. The Castle Doctrine (“A man’s home is his castle”) states that it is not necessary to retreat when one’s home is threatened, and some societies have fostered the “unwritten law,” which allows a husband to kill a person found in bed with his wife.

Christians and Jews can quote the Sixth Commandment as “Thou shall not kill.” It is almost universal morality that man does not kill man, unless permitted by law. Certainly the state allows self-defense and reserves the right to execute certain criminals. In war, it is the duty of the soldier to kill the enemy. These are acknowledged and permitted situations.

“The word ‘kill’ in Exodus 20:13 and Deuteronomy 5:17 means ‘to murder, crush or slay,’” writes Abigail Rian Evans in Is God Still at the Bedside? “The proper translation is, ‘You shall not murder.’ It is interesting that the King James Version of the Bible correctly translates the Sixth Commandment (in Matthew 19:18): ‘Thou shalt do no murder.’ The Hebrew word ratsach and the Greek Word phonenō (‘to murder, to kill’), which are used in the Sixth Commandment, both clearly mean ‘murder.’

So Grossman maintains that creatures generally do not kill intra-species and no other animal except man kills other animals of the same species. With rather limited exceptions (accidental deaths in mutual combat for dominance or mating), only some apes are known to kill apes from other tribes. It seems reasonable that animals that kill their own species will eventually, over a million years, manage to wipe out their own species.

“A raven can peck out the eye of another with one thrust of its beak; a wolf can rip the jugular vein of another with a single bite,” said Austrian zoologist, ethologist and ornithologist Konrad Lorenz. “There would be no more ravens and no more wolves if reliable inhibitions did not prevent such actions.”

However, Lorenz qualifies the above statement that “creatures do not kill intra-species.” In his book On Aggression, he maintains that only those species with the physical attributes to kill (talons, tusks, claws or fangs) have developed such an inhibition, lest the species wipe itself out. On the other hand, species that lack these physical attributes to kill have never developed this inborn inhibition — man and chimpanzees. Man developed weapons that make him more dangerous than any other animal, while chimps use tree limbs as clubs or gang up to kill other tribes. Whether Grossman is correct that man has an inborn inhibition to kill man or Lorenz, who maintains that the inhibition that precludes intra-species killing is only seen in animals with the physical attributes to kill, the fact remains that mankind has adopted a universal morality that forbids homicide except under law or war. This inhibition definitely influences law enforcement officers and soldiers to some degree.

The above discussion on universal morality, religion and laws might explain, in part, the reason why a man finds it difficult to kill another man. But as Marshall noted above, marksmanship and familiarity with a weapon is no guarantee that the person will kill in battle. The police officer is exposed to marksmanship upon employment and must demonstrate proficiency with his weapon. However, this is a perishable skill and, unless continually reinforced with proper practice, it will degenerate. Police department policies and practices vary among the 18,000-odd local, state and federal law enforcement agencies in the United States. While some departments require their officers to practice marksmanship once a month, many others only require pistol practice once a year. The private citizen who decides to own a pistol will generally spend some time shooting at a paper target and acquire familiarity with the operation and safe handling of the weapon, but it will only be those few enthusiasts who make it a habit to practice frequently.

The military has bought into Marshall’s observations.

“In addition to traditional marksmanship, what is being taught … is the ability to shoot reflexively and instantly and a precise mimicry of the act of killing on the modern battlefield,” Grossman writes. “In behavioral terms, the man shape popping up in the soldier’s field of fire is the ‘conditioned stimulus;’ the immediate engaging of the target is the ‘target behavior.’ Positive reinforcement is given in the form of immediate feedback when the target drops if it is hit.”

Notice that Grossman uses the words “precise mimicry,” meaning simulating the conditions on the field of battle.

W.E. Fairbairn, a legendary British lawman in Shanghai and co-designer of the Sykes-Fairbairn fighting knife, had a “mystery house” constructed where his officers would enter a dark house replete with loud noise and confusing commands, screams, etc. As the officer advanced through the house, he was confronted with various scenarios, including hostages, aggressive-looking dummies and life-size targets that popped up and disappeared, and he had to use his pistol or knife to come out “alive.” This was in 1920, nearly 100 years ago.
Modern military training increased the fire ratio to nearly 90 percent in Vietnam. However, the downside is that more than a million veterans developed Post Traumatic Stress Disorder (PTSD), which resulted in difficulties reentering society. Many turned to alcohol or drugs, and suicide, divorce, homelessness and mental problems became increasingly common. Our military overcame the problem of low-fire ratio among riflemen, but at a drastic cost.

The FBI report “Killed in the Line of Duty” notes that in 12 of the incidents studied, the slain officer had a partner or backup, and 11 of these backup officers never fired a shot while their partner was slain. Because of the political or otherwise sensitive nature of the incidents, there was no investigation to determine the reason for this non-firing. It might well be that the officers hesitated or even froze. It does not seem possible that all 11 of those officers were unable to kill, but it might be possible that one or more certainly couldn’t.

Law enforcement takes for granted that an officer will use force — even lethal force — when required, with only training in the skills necessary to properly apply such force. Very little attempt is made to determine if the recruit selected has the necessary psychological makeup to kill another human being when necessary. It would seem a given that the person applying for a position of peace officer is prepared to use force. However, many applicants have never had to prove or had the opportunity to prove to themselves that they were capable of inflicting severe pain to the extent of death on another human being. (This may also explain the poor accuracy rate demonstrated in many law enforcement shootings and the failure of some officers to even fire their weapons.) Some officers might be able to use lethal force because fear of peer disapproval or the exigency of the circumstances might trigger a survival reflex, but law enforcement history has demonstrated that many officers who have had to kill are forced to retire because of PTSD; the same PTSD that has been diagnosed in thousands of war veterans. The major difference is that the war ends for veterans, but the officer must go back onto the streets year after year and face the same kinds of scenarios that inflicted his trauma. Many are forced to retire for “medical” reasons.

Intense psychological conditioning might overcome this aversion to killing, similar to that which the military has adopted, but at what cost to the officer? Additionally, the battlefield is not the city streets. In war, the enemy is (usually) in a uniform and shooting at you. The police officer cannot readily identify the enemy from other people. In addition, there are many “rules” that govern official shootings that the officer must follow before pulling the trigger. Essentially, the officer must be facing a lethal attack before shooting. He must be reacting to a perceived threat, which, of course, places him in an unenviable position. He will always be seconds behind the threat.

Whether Grossman or Lorenz are correct in their reasoning, the fact still remains that some law enforcement agencies have experienced incidents that have encouraged them to develop scenarios designed to test the willingness of recruits to apply force, even lethal force. Further, the poor accuracy might, in part, be caused by officers hesitating to kill their opponent.

The fact remains that private citizens without the intensive firearms training that the military and law enforcement officers experience will be at an even greater disadvantage when facing a lethal threat. Anyone who elects to carry a gun must be ready to answer the question, “Am I prepared to kill?”