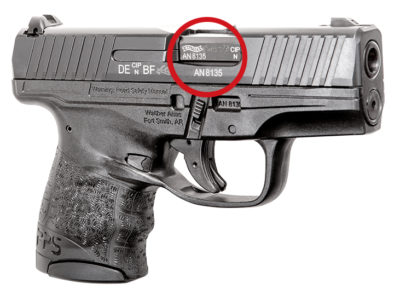 Only guns with serial numbers between AN3020 and AU7502 fall under this recall. Serial numbers can be found on the left side of the slide, barrel and frame. (Photo: Walther)

Walther Arms is issuing a recall for a run of PPS M2 pistols. These guns have a flaw that may potentially make them no longer drop-safe, so all PPS M2 owners should take note and check their serial numbers.

The flaw affects guns inside the serial range AN3020 to AU7502. Serial numbers are marked on the slide, frame, and barrel on all PPS M2 pistols. Any guns with earlier or later serial numbers are not affected by this issue.

If you have a gun that is listed under the recall, or if you’re unsure whether or not your gun may have this flaw, contact Walther immediately.

Walther projects a 6- to 8-week turnaround time on repairs and replacements, but given the seriousness of this problem, affected PPS M2 owners should immediately unload and put away these guns and get them serviced as soon as possible.

Guns that are not drop-safe may fire a chambered round if they are dropped, potentially injuring or killing anyone nearby.

Guns that have been fixed will be marked with a stippled dot on the inside of the grip frame behind the magwell. (Photo: Walther)

The Walther PPS M2 is the updated version of their highly successful PPS, or Police Pistol Slim. These single-stack service pistols are designed for backup and concealed-carry and are very popular on the commercial market.

The M2 version of the PPS was released a couple of years ago and it followed the success of their other modernized M2 products. These guns feature a new grip texture and redesigned controls for ease of manipulation.

Like the original PPS, the M2 model uses 6-, 7- and 8-round magazines for different carry styles. Unloaded it weighs 21 ounces and measures in at 6.3 inches long and just 1 inch wide at the widest.

The PPS M2 is offered in five different configurations. There’s the base model with on 6- and one 7-round magazine. The LE model comes with high-visibility 3-dot sights and three magazines. It is also available from the factory with XS F8 night sights.

Two more recent additions include the PPS M2 Laser with a frame-mounted laser sight and the PPS M2 RMSc. The M2 RMSc is dovetailed for a micro red dot sight and comes with a micro-sized Shield RMSc optic.

PPS M2 pricing starts at around $350 making these a real hit with the concealed-carry crowd. However, if you carry one of the guns affected by this recall, contact Walther today. If you’re not, stay safe and enjoy your pistol.

Next post: Remington’s 700 CP is a Tactical Bolt-Action Hunting Handgun

Previous post: Democratic Rep: ‘Don’t Want to Give Up Your Guns? We’ll Nuke You!’