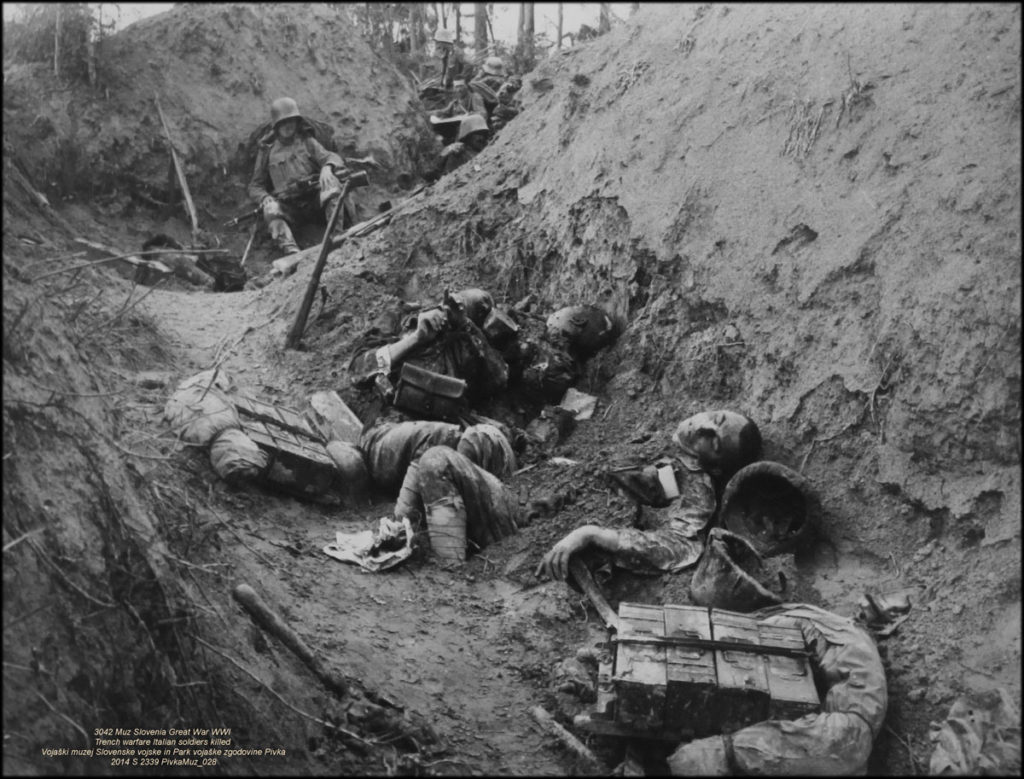 On September 15, 1916, the French 6th and British 4th Armies launched a coordinated attack against the Imperial German 1st Army along the upper reaches of the River Somme in France. The attack was intended to hasten victory for the Allies and represented the third phase of the Battle of the Somme, the largest battle on the Western Front during World War I. More than three million men clashed in a protracted industrialized maelstrom of death and carnage. A million men were killed or wounded. The Battle of the Somme was one of the bloodiest conflicts in all of human history. 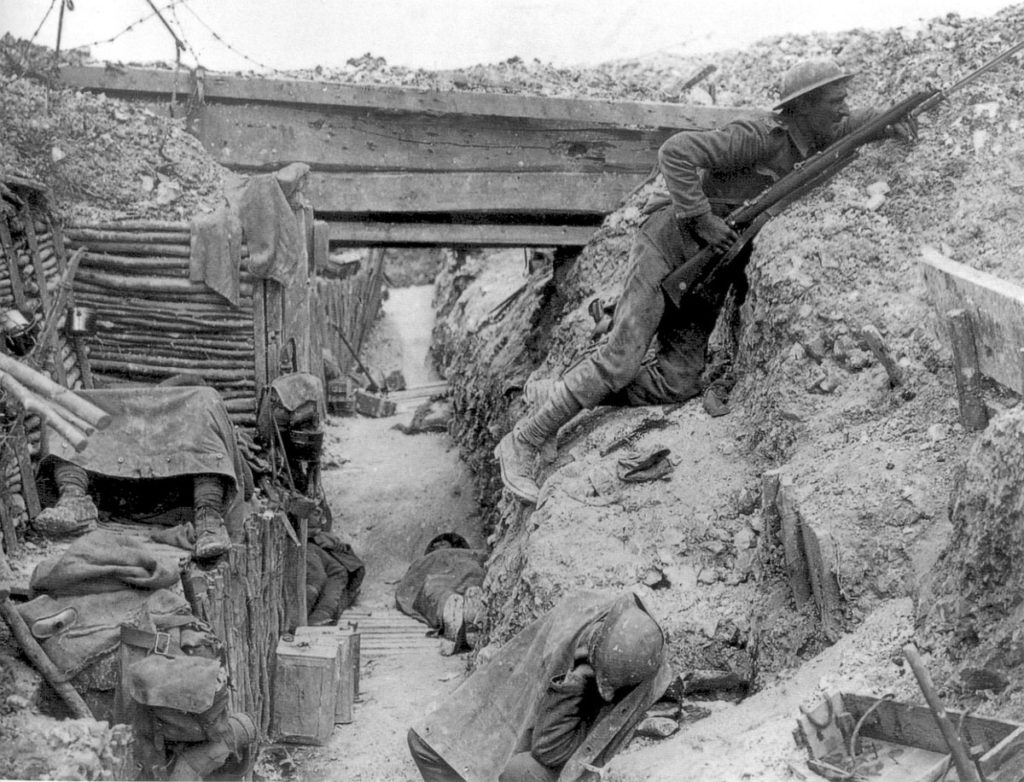 Of all the many-splendored contrivances to characterize mankind’s newfound love affair with war on an industrial scale, one of the most remarkable was the tank. British Mk 1 tanks first saw action during this engagement. Their performance and the lessons learned from this early armored assault changed the way men kill each other.

The Mk 1 came in two flavors. The male version sported a crew of eight, two 6-pounder cannon, and three Hotchkiss 8mm machineguns. This 28-ton monster lumbered along at a top speed of 3.7 miles per hour. The female version was a ton lighter and carried four .303-in Vickers guns as well as a single French Hotchkiss. Female tanks were crammed to the gills with machinegun ammunition and served as support for the cannon-armed male versions. They were both noisy cacophonous death traps that poisoned their crews with noxious fumes and struck sheer terror in the hearts of the enemy. 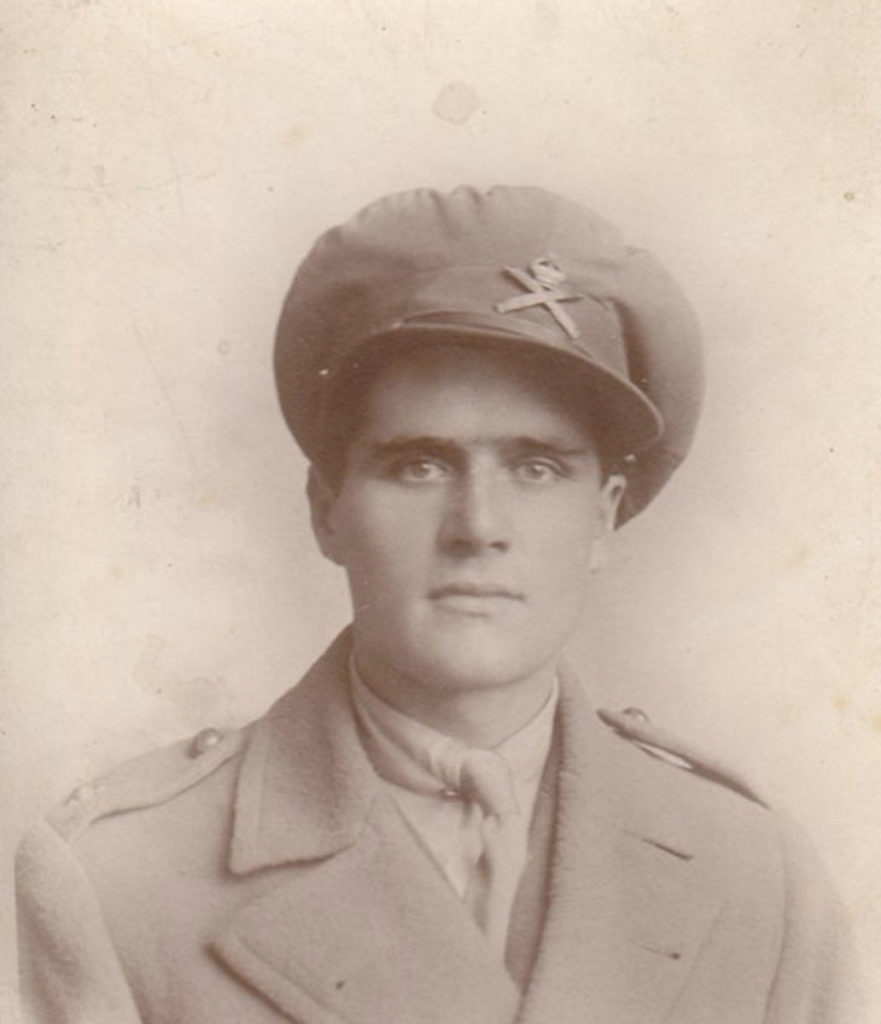 The commander of one of these female tanks was a British Lieutenant named Arthur Herbert Blowers. He had christened his new war machine “Dolphin.” Its unit designation was D5.

Blowers and his crew steered D5 across no-man’s land fueled by a toxic combination of petrol, testosterone, and raw unfiltered courage. The Germans scattered before their machine, some falsely thinking that these lumbering behemoths were demonic beasts clamoring forth from the bowels of hell. Once the Germans recovered from their initial shock they attempted to swarm the cumbersome vehicles, attacking with machineguns, hand grenades, and artillery in the direct fire role. Ultimately most of the British tanks were disabled or destroyed, though the chaos they had sown among the German ranks was unprecedented. 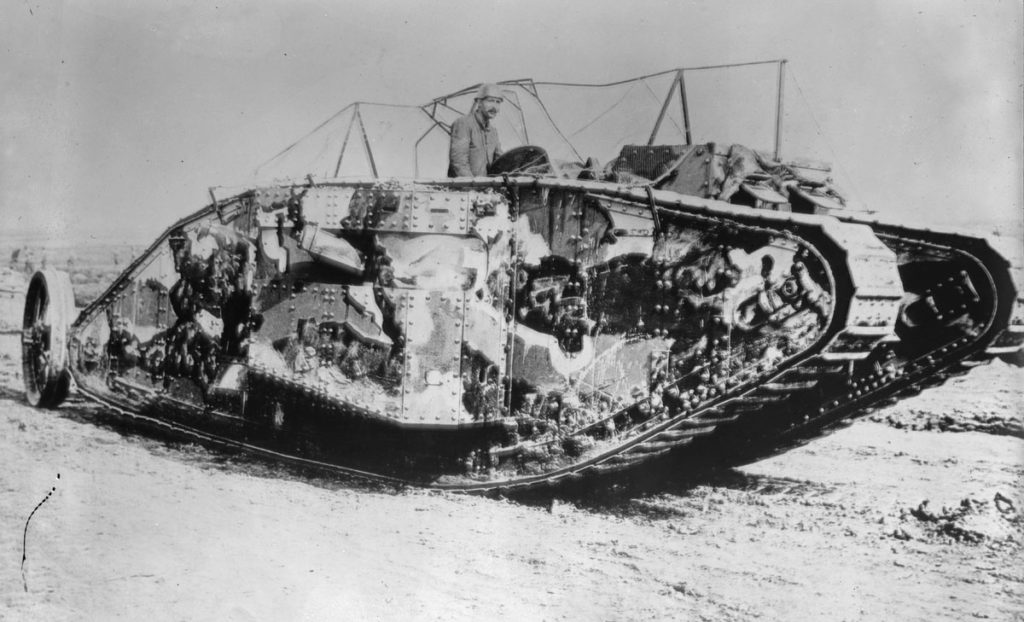 D5 was ultimately immobilized by artillery fire. Blowers and his men expended their entire load of belted ammunition for all five of their machineguns, killing countless Germans in the process. When the Dolphin’s offensive capability was spent Blowers and his surviving crewmembers evacuated the tank and headed back toward friendly lines on foot. 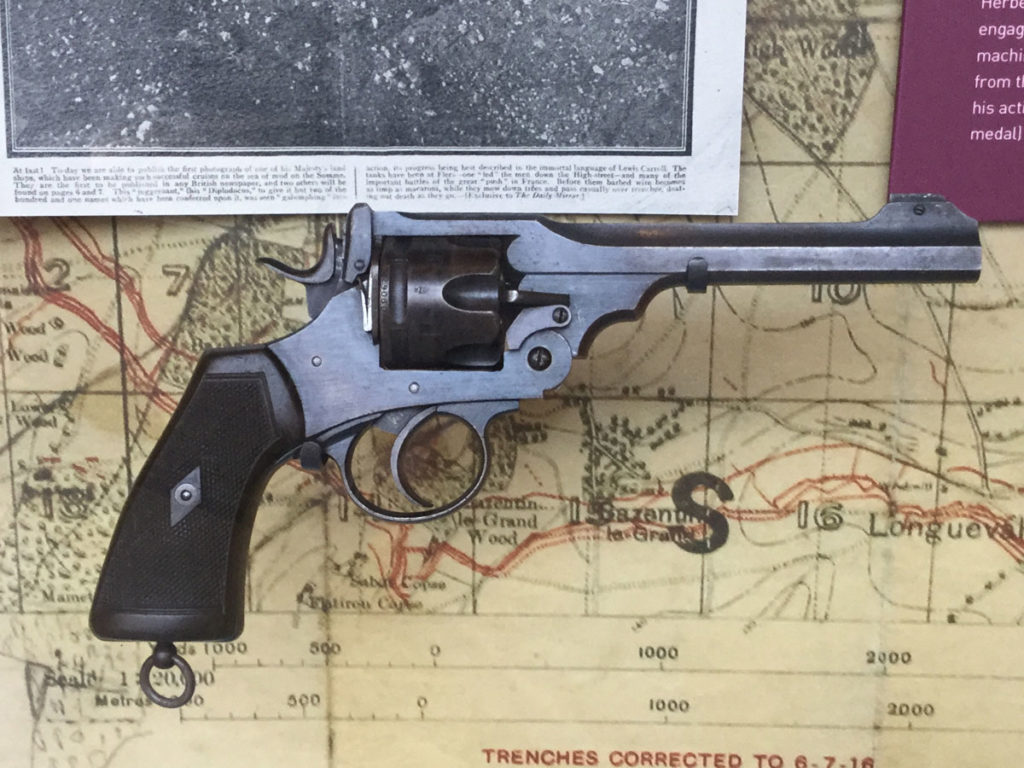 The Webley revolver Lieutenant Blowers carried in combat is on display in the Bovington Tank Museum in Southern England.

Lieutenant Blowers carried nothing more than his six-shot Webley revolver as a personal defense weapon. Crawling through fetid German trenches stacked deep with corpses both fresh and otherwise, Blowers and his crew picked their way across the most dangerous terrain on earth. As they moved from trench to trench and crater to crater they encountered small groups of German soldiers dazed by the ferocity of the assault. The subsequent combat was close quarters and pitiless, the outcome frequently decided by the revolver, the cold steel of the bayonet, or the sharpened edge of an entrenching tool. By the time Lieutenant Blowers reached the sanctuary of the British trenches, he had expended 103 rounds through his Webley. That horrible day Lieutenant Blowers earned the Military Cross, Britain’s third-highest award for gallantry in action. For his part, Blowers was just thankful to be alive.

The Webley Top-Break Revolver, also known as the Webley Self-Extracting Revolver, served as the standard-issue service pistol for the British armed forces from 1887 until 1963. The Webley saw production through a variety of Marks in both .455 and .38/200 chamberings, but the basic action remained the same. For its day the Webley represented the state of the art. 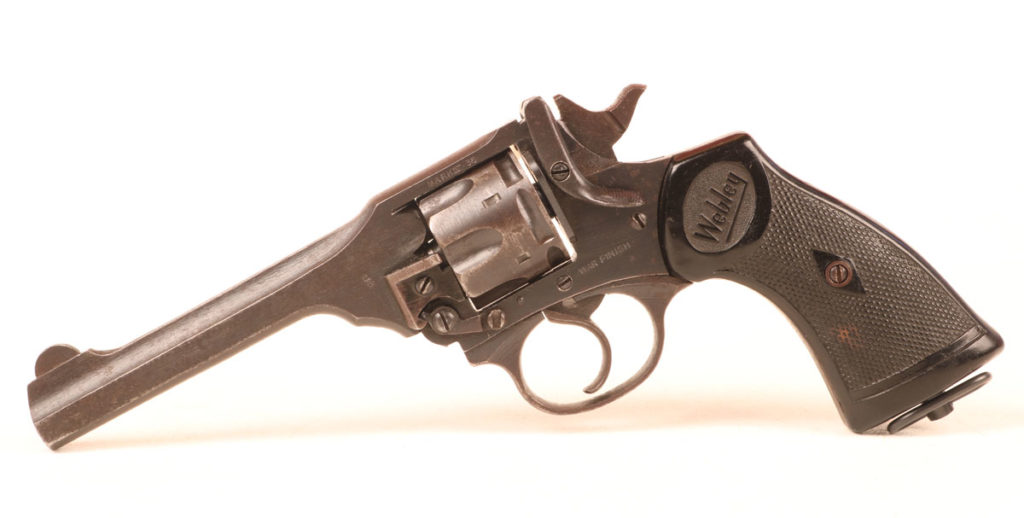 The initial 1887 military order for the Webley Mk 1 revolver was for 10,000 copies costing three pounds apiece. While the British government was obviously a prolific customer, countless copies were sold as private purchase sidearms to English officers deploying overseas. Early combat action in the Boer War as well as World War I cemented the Webley’s sterling reputation. 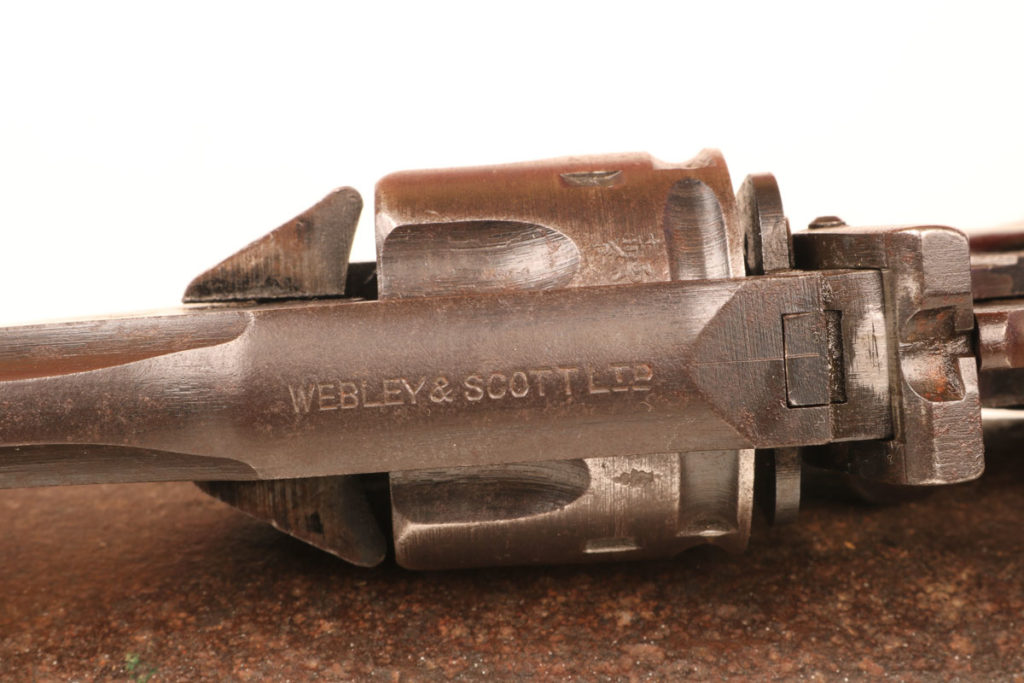 The most revolutionary aspects of the Webley design were its double action/single action trigger combined with its top-break action. The DA/SA trigger allowed the gun to be fired one-handed in confined spaces while also allowing the weapon to be manually cocked in the single action mode for additional precision. The top-break design allowed the pistol to be broken open for rapid extraction. Individual rounds had to be laboriously loaded one cartridge at a time, but the extraction process removed all six empties with a quick snap of the wrist. At a time when the Colt Single Action Army was still considered a militarily viable handgun, the Webley offered some remarkably advanced capabilities. 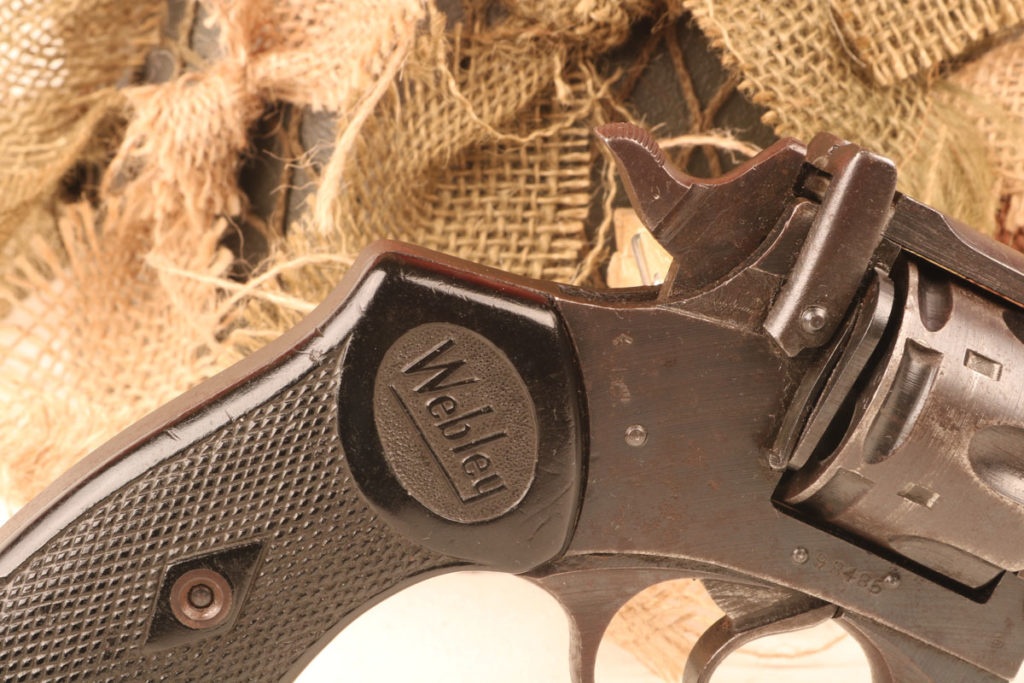 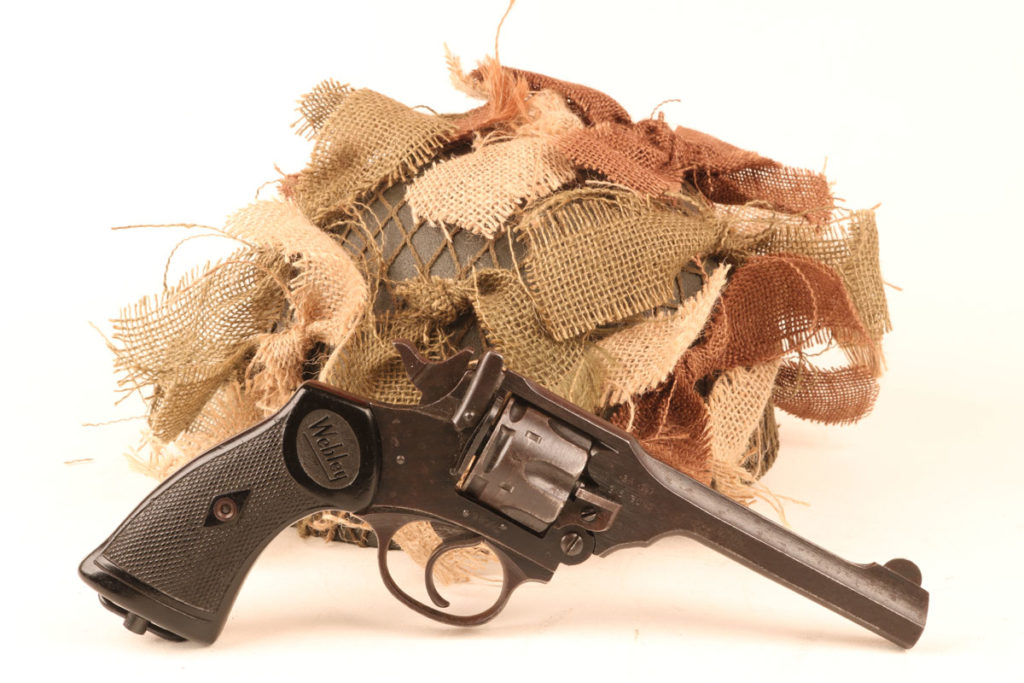 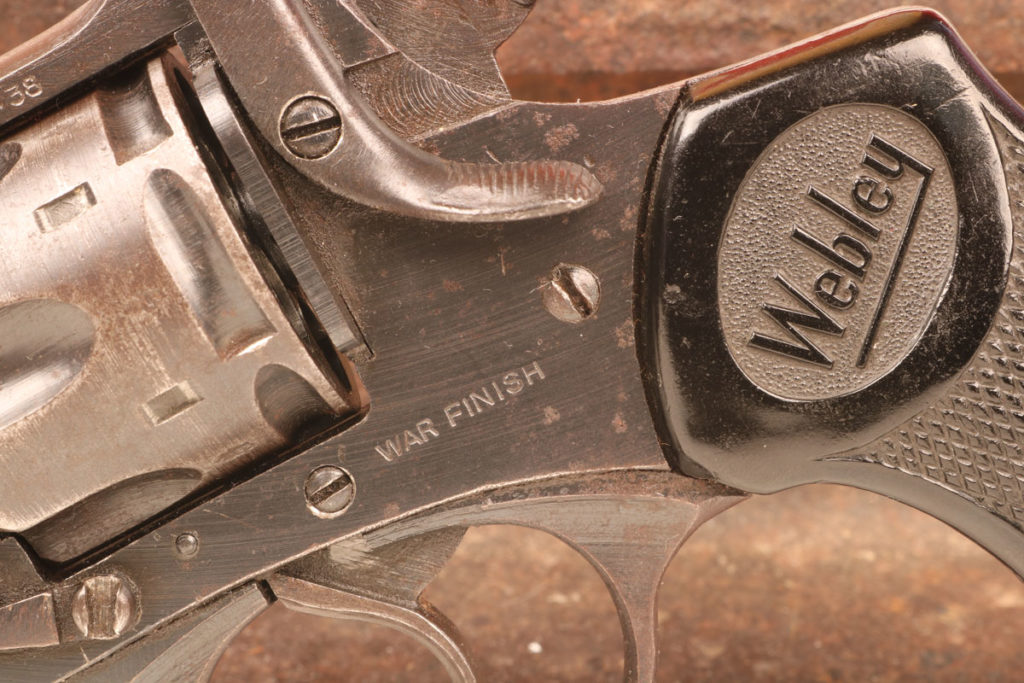 Wartime Webleys were marked “War Finish,” presumably to remind the world that the British were still superlative gunmakers when they weren’t immersed in Total War.

The Webley name was first associated with a family of cap and ball revolvers produced in 1853. These handguns evolved over time to include the Webley Bulldog revolver, a radically shortened vest pocket version introduced in 1872. George Armstrong Custer was known to have carried a brace of Webley Bulldogs at the Battle of the Little Bighorn. 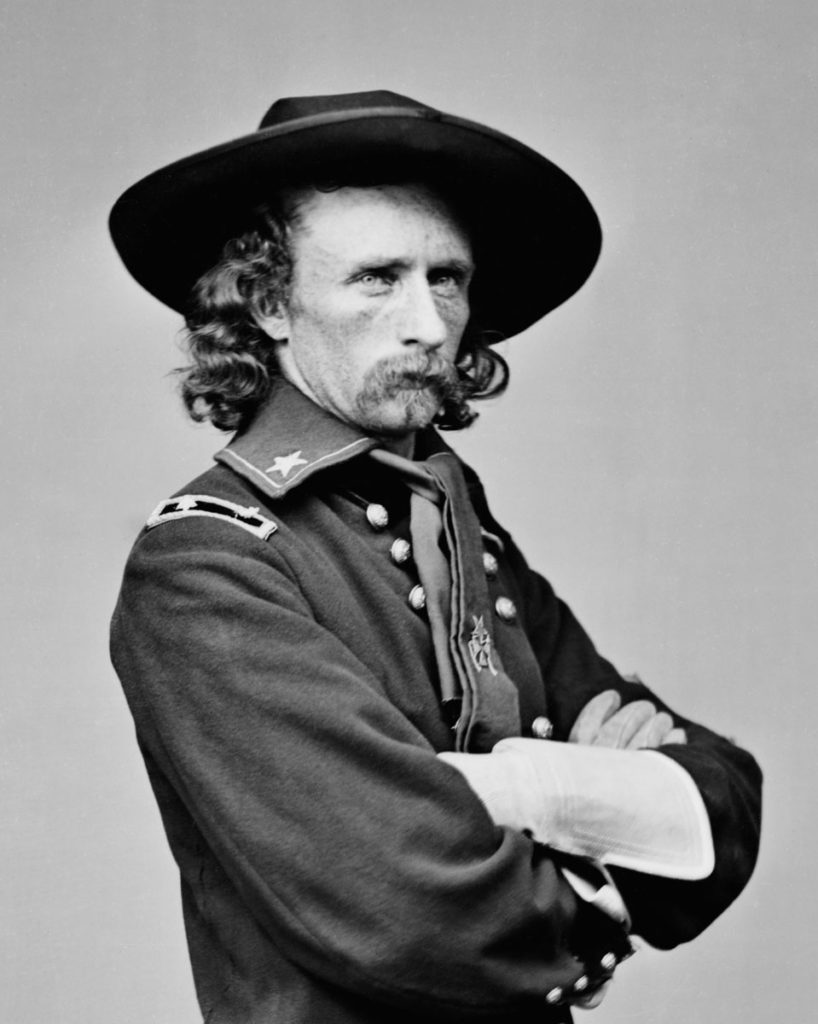 George Armstrong Custer carried a pair of Webley Bulldog revolvers on his person at the Battle of the Little Bighorn. 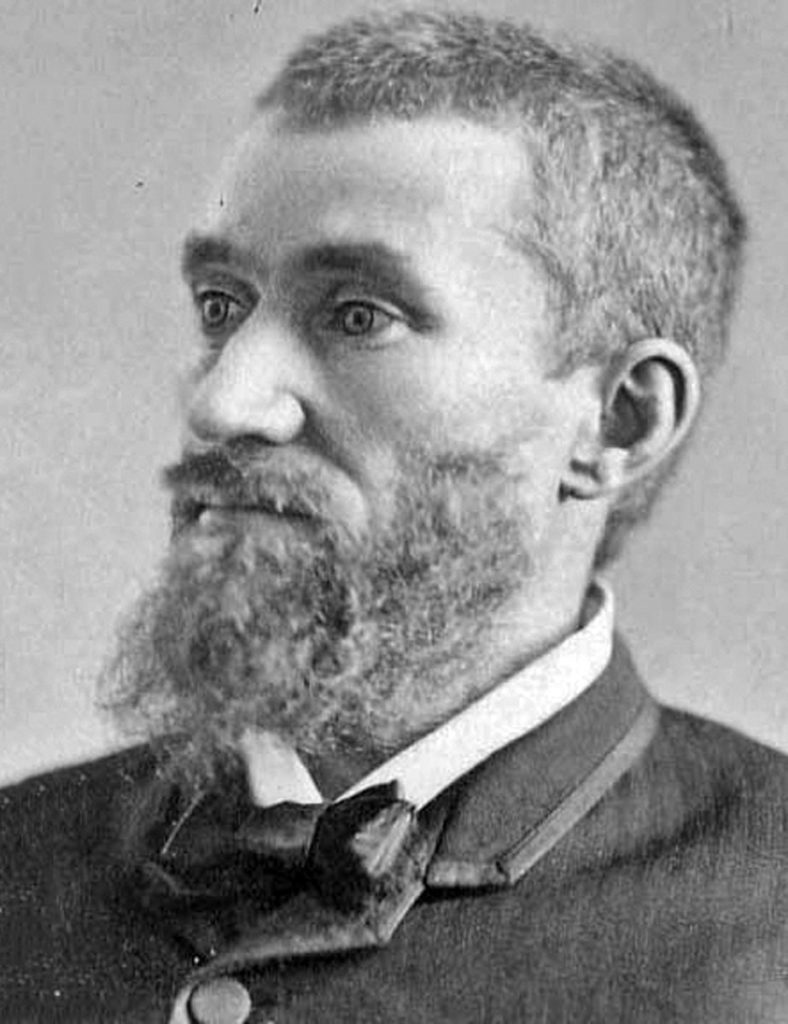 In 1881 a disgruntled lawyer named Charles J. Guiteau bought a Webley Bulldog with ivory grips along with a box of ammunition and a penknife for $10 from his local hardware store. After firing a total of ten rounds into the trees along the bank of the Potomac River to get familiar with the weapon he used the gun to mortally wound President James Garfield. Guiteau chose the ivory grips because he felt they would look more attractive when the assassination weapon ultimately ended up in a museum. The Guiteau revolver was eventually stolen from the collection in the Smithsonian. Its current whereabouts are unknown. For his trouble, Guiteau was hanged five months after the shooting.

Early general-issue Webley revolvers were chambered for the heavy .455 rimmed cartridge. Many of these massive WW1-era wheelguns have had their cylinder faces shaved to accept much more common .45ACP rounds. However, the pressures generated by .45ACP cartridges exceed those of even the proof loads used to test the Webleys so they should not be used in these guns. 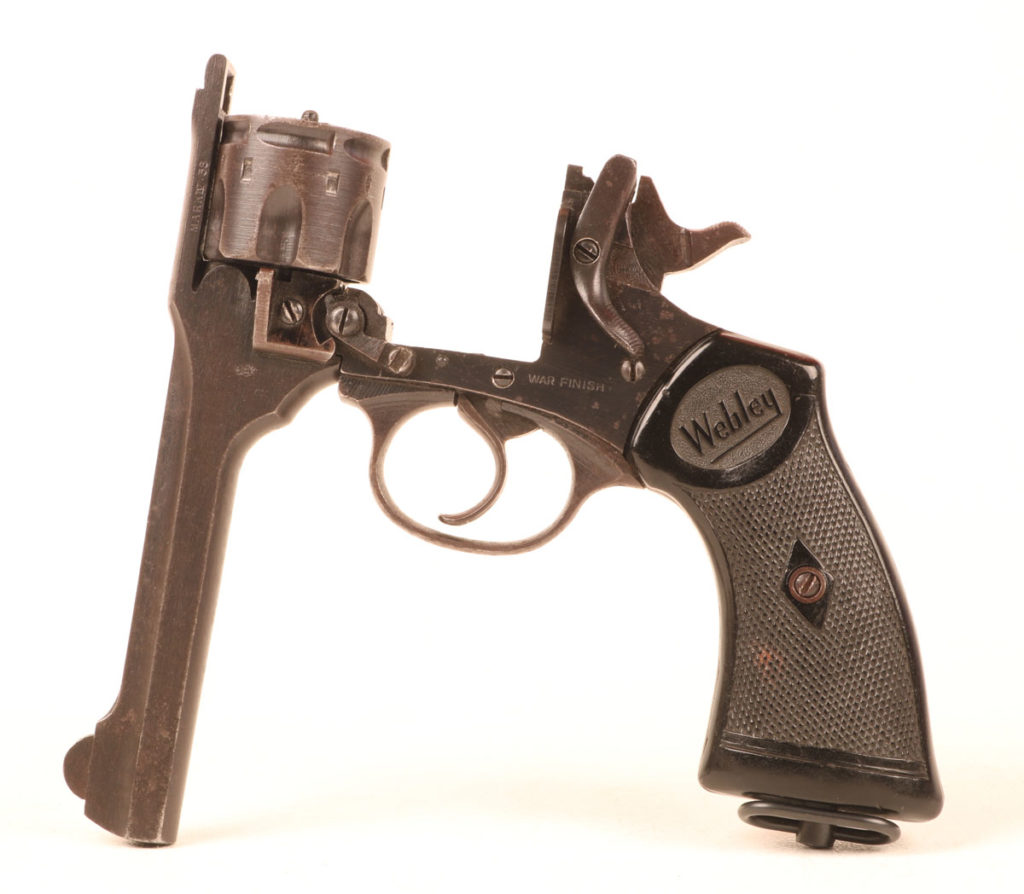 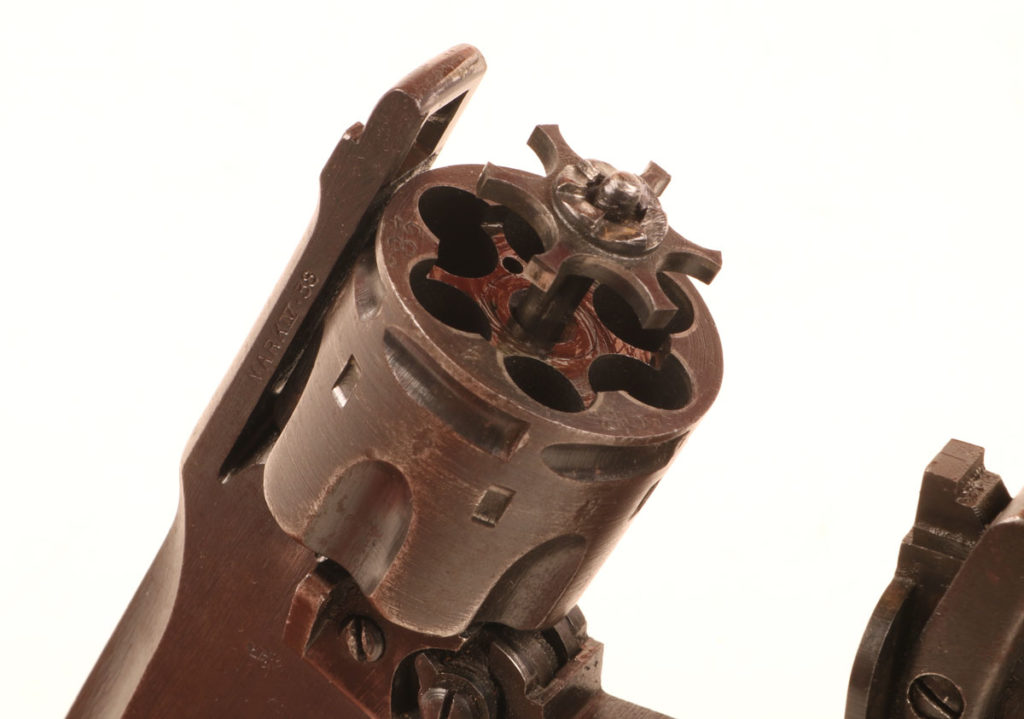 Later WW2-era Mk IV .38-caliber Webleys launched a fairly anemic .38/200 round known on this side of the pond as the .38 Super Police. This cartridge pushed a 200-grain soft lead bullet to around 600 feet per second. However, this relatively long bullet was minimally stabilized. It was therefore thought that the bullet would tend to wobble and become unstable in flesh, thereby enhancing its destructive potential downrange.

When supply could not keep up with demand the British also developed the .38/200 Enfield No 2. This gun bore an esoteric similarity to the Webley but had a unique set of mechanical guts. The Mk1* was the same Enfield revolver with the hammer bobbed back for Double Action Only operation. This was done to minimize the possibility of armor crews catching their hammer spur on something within the confines of an armored vehicle.

Though the .455 Mk VI Webley had been declared obsolete, it was not fully culled out of active British service until 1947, serving alongside its smaller more docile cousin throughout the war. More than 600,000 Webley revolvers saw service. Wartime guns are typically marked “War Finish” as a tacit reminder that Webley was producing these guns as quickly as possible. Apparently even in the midst of total war the British were still concerned about their reputation as fine gunmakers. 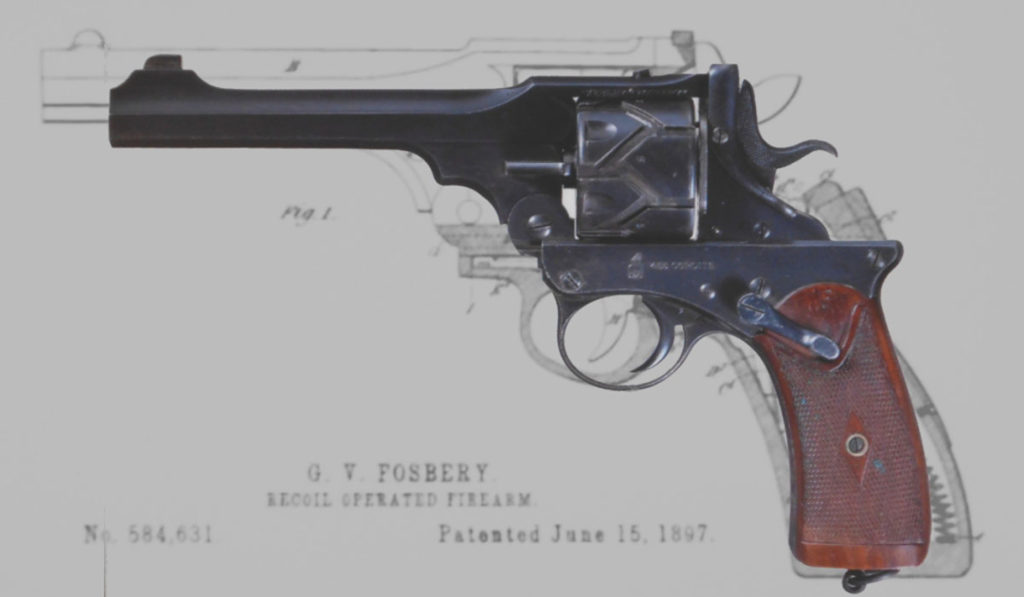 The Webley-Fosbery automatic revolver employed a sliding top half that automatically indexed the cylinder and cocked the hammer.

One of the most unusual adaptations of the Webley design was the Webley-Fosbery automatic revolver. Produced between 1900 and 1915, this bizarre automatic wheelgun incorporated a sliding upper half that reciprocated via recoil forces, rotating the cylinder and cocking the hammer automatically. The Webley-Fosbery included a manual safety catch and had a smooth and light trigger that made it popular with target shooters. Webley-Fosbery revolvers are to be found in only the most advanced gun collections today.

The Webley revolver was a generation behind the autoloading designs fielded by the US and the USSR. On the left is the US M1911A1. On the right is the Soviet Tokarev TT33. 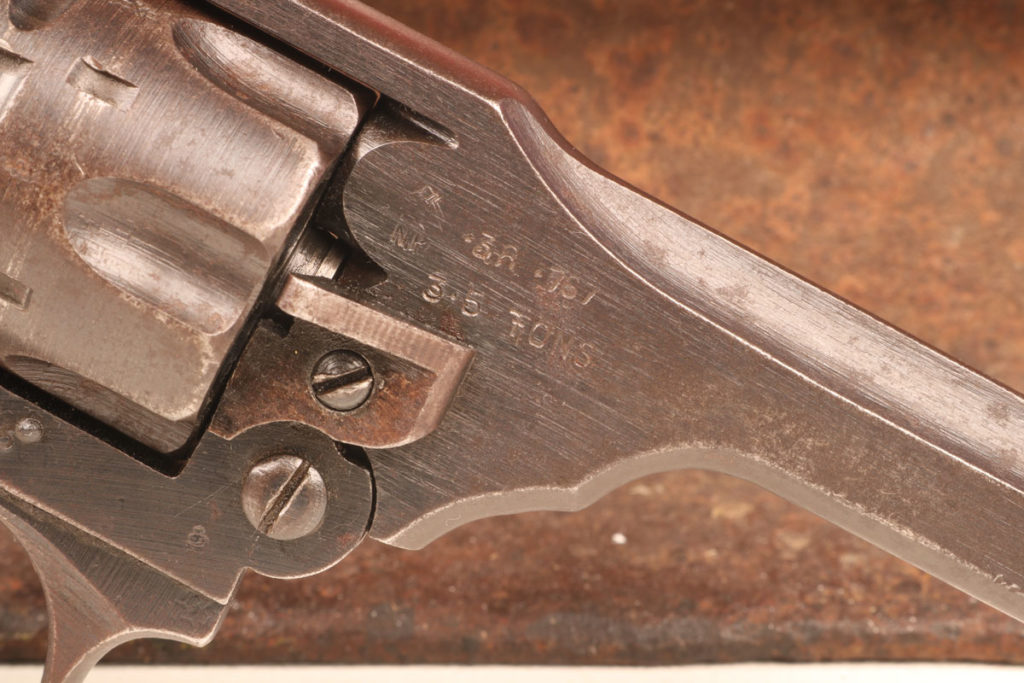 British combat weapons are festooned with some of the most fascinating markings. This shows that the gun is proofed to 3.5 tons.

The Webley revolver soldiered on alongside much more advanced autoloading designs for decades past when most modern militaries had long since cashed in their wheelguns. The soft-shooting personality of the gun, particularly in its small-caliber Marks, combined with the rugged design meant that the weapon was both reliable and effective in combat. Variants saw action in places like Burma, North Africa, Italy, Normandy, Belgium, and Holland. Though the Webley is a bit cumbersome compared to more modern designs it is a sweet-shooting handgun that remains prickly even today. 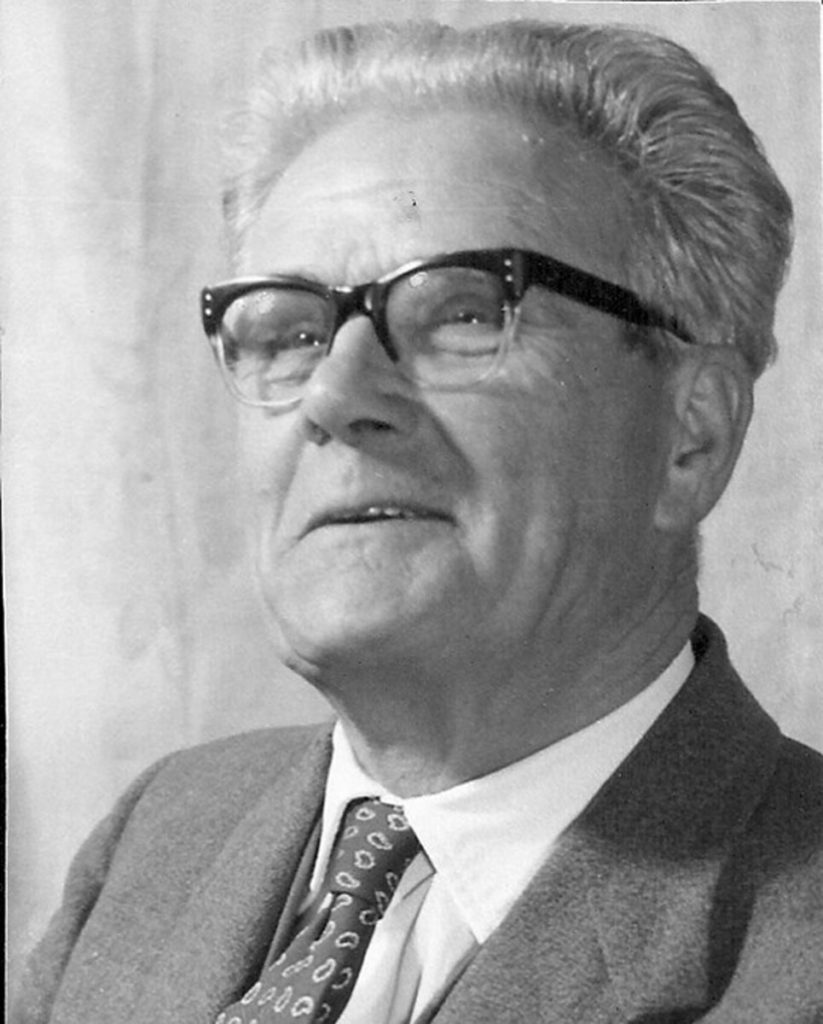 Arthur Blowers, shown here in his sixties, ultimately died of natural causes at age 89. Heroes such as this secured the blessings of liberty for current generations.

Arthur Herbert Blowers died in Spixworth, Norwich, Norfolk, United Kingdom of natural causes in 1980 at age 89. His bold assault near the French village of Flers when he was 25 attained its objective and enabled the infantry to advance past obstacles previously thought to be insurmountable. The rugged British revolver that he carried that bloody day is on display at the Bovington Tank Museum in Southern England, a mute but tangible connection to a time when the world tried desperately to kill itself.