Why You Should Avoid Handloads for Concealed Carry 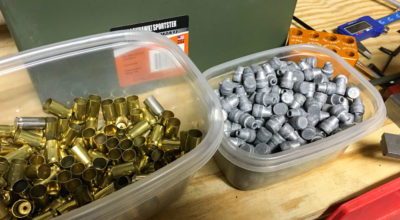 Upon first consideration, it would seem to be a decent idea to use handloads for self-defense.  A person experienced in handloading could choose the right combination to create tailored ammunition which would be far more effective in a real-world situation than the standard ammunition available for purchase in a store.  However, there is a risk.  In the event that you use a handload in self-defense, you may face unanticipated consequences from a legal system that can sometimes be anti-gun and turn the table on someone acting within his legal rights.

A Night on the Town

Consider this example. You are out with your wife for a night on the town.  During the evening you are approached by a person whom you perceive to be a threat.  Your 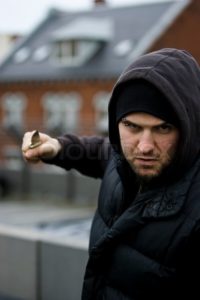 A night on the town with your wife is interrupted by an attacker. (photo/Colourbox)

perception becomes reality when the man moves towards you and your wife aggressively, appearing to attack.  There is a glint of light off of what appears to be a deadly weapon in the attacker’s hand.  You are lawfully carrying a concealed handgun for protection.  The handgun is loaded with handloads that you have created.  You use the handgun to defend yourself and your wife and shoot the aggressor killing him on the spot.

When the police arrive you are treated like a criminal.  They put you on the ground, slap handcuffs on your wrists, put you in the back seat of a patrol car and take you to jail.  You are charged with homicide and are forced to stand trial.  Your life is on the line.  Will the jury decide that you acted in self-defense and send you home to your family, or will you be sentenced to serve several years of your life in prison?

Handloads as an Indicator of Pre-meditation/Malice

At the trial, the prosecutor’s argument goes something like this, “Ladies and gentlemen of the jury, he intended to kill his attacker.  In fact, he intended to kill anyone he shot with those bullets he designed, bullets he manufactured with the specific intent to kill.  He established premeditation and malice when he loaded his handgun with those customized killer bullets, hollow-point bullets that were designed to rend and tear brutal wounds and cause horrible pain and suffering and ensure the agonizing death of his victim.  There can be no other reason to manufacture customized, deadly ammunition other than the intent to kill another human being. He was carrying them just waiting and hoping for an opportunity to use them.”

In the end, your good idea of using handloads for self-defense may have just helped prove that you intended to commit murder.

An Additional Reason Handloads Can Cause Problems

The use of handloads can cause other serious legal problems for your defense team if you end up in court.  Defensive shootings often happen at close range.  This causes gunshot residue (GSR) from your muzzle to be deposited on your attacker’s body or clothing.  The GSR can become a critical piece of evidence at trial if a prosecutor insists the attacker was too far away from you to endanger you when you took the shot.

Again, you can imagine the prosecutor’s argument, “We did scientific testing on the gunshot residue deposited on the victims clothing.  The scientific evidence proves beyond any doubt that the victim was far enough away that deadly force was not necessary for the situation.  Since deadly force was not reasonably necessary, there was no reason to pull out a gun and blast away with those customized killer bullets.”

Determining distance using GSR evidence is supposed to be done by firing ammunition identical to what was in your gun at the time of the shooting.  If the ammunition is not standard, it will be difficult to obtain accurate results.  Sometimes, the testing will be done using a factory load which can give a false indication of the distance involved.  This can lead to an argument by prosecutors that the attacker was actually much farther away at the time of the shooting than he actually was.

Another problem that can arise is the potential conflict with allowing you to testify as a witness on the ammunition that was used.  On the one hand, you are the expert. You know exactly how the handloads were made.  You made them.  You also know what your intent was in manufacturing the handloads.  The problem is that putting you on the witness stand is not always a simple thing.

Normally, a person charged with a crime has the absolute right not to testify.  If he chooses not to testify, then the jury deciding the case is instructed by the judge that they cannot consider the fact that the defendant did not testify in determining whether the prosecutor has proven his case beyond a reasonable doubt.  However, if a person charged with a crime chooses to testify, then he is treated just like any other witness and is subject to cross-examination by the prosecutor.

In some cases, it is in your best interests not to testify.  It becomes difficult to balance that interest when you are the only person who knows about the handload that was used during the shooting.  If you choose to testify about the handload, you will be subject to cross-examination which may prove disastrous for your defense.  Even if you are innocent, a skillful prosecutor can twist your words.

Let’s say you just testified about how you created the handloads and that you created them with the intent to be effective in stopping an attacker without killing him.  You think you have helped your case, but one can imagine the following cross-examination by the prosecutor:

Question: So, you admit that you were carrying a gun believing that you might have to shoot someone.

Even if you are telling the truth, prosecutors can twist your words to fit their theory of the case. (photo/iStock)

Answer: Yes, shoot someone in self-defense.

Question: You admit that you created those bullets.

Question: You admit that you shot the gun.

Question: You admit that the shot you fired killed the victim.

Answer: Yes, but he was an attacker, not a victim.

You can appreciate how taking the witness stand in this situation can be a real double-edged sword.  Sure, you had a chance to tell the jury your version of what happened, but you also gave the prosecutor the chance to have you admit in front of the jury that you shot and killed the alleged victim.  Even if you try and clarify what happened and tell the jury nothing but the truth, your words can be twisted to support the prosecutor’s “killer bullet” theory of the case.

The Wise Alternative to Handloads

Instead of using handloads for self-defense, it is far wiser to use the same ammunition used by law enforcement in your community.  One can appreciate how that would allow a defense attorney to address the argument presented earlier in this article.

The defense attorney could easily counter the prosecutor’s argument by explaining you chose the same type of ammunition as the police use and for the same reasons.  For example, with hollow points, the bullets are less likely to over penetrate the body of a dangerous attacker and strike down unseen innocent bystanders.  They are also less likely to ricochet and create additional unintended victims.  In addition, since hollow point ammunition has increased stopping power, the attacker would have to be shot fewer times in order to neutralize the attack.  Since he will be shot fewer times, he will be more likely to live.

Also, using factory ammunition means that you can subpoena an engineer from the factory that can testify as to the design, testing, performance, and advertised use of the ammunition product without having to testify yourself.

The Times in Which We Live

It is a challenging time to be a gun owner in America.  Those who are anti-gun are constantly working to change the laws and limit our Second Amendments right to possess firearms and protect ourselves and our families.  It is unfortunate that we should have to think about scenarios like those presented in this article.  We should be able to use handloads for concealed carry, but the times in which we live make it a wiser choice to use standardized factory loads that are similar to those used by law enforcement officers in our communities.