Don’t Let Injuries Keep You from Carrying! Tips for the Wounded Carrier 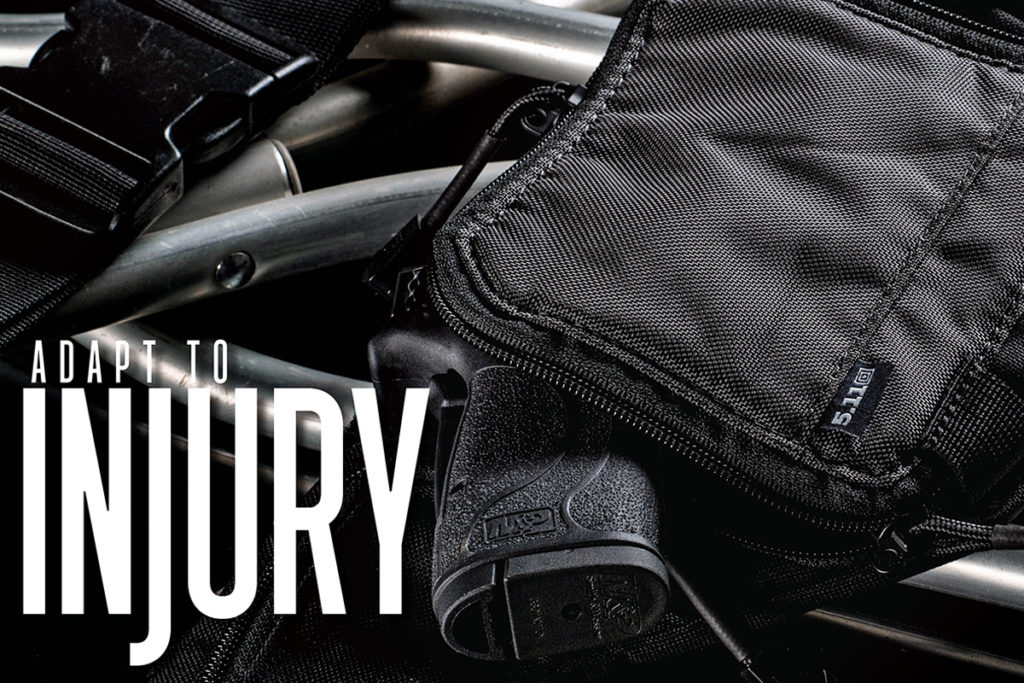 Editor’s Note: The following is a syndicated article by author Bradley Lewis that first appeared in USCCA’s Concealed Carry Magazine Volume 15, Issue 8, November/December 2018 under the title, “Adapt to Injury: To Carry or Not to Carry?”

I stood at my dresser, looking at my EDC gear, and asked myself, “Is it worth it?” I’d injured my leg and could not move around without assistive devices, and on this particular day, I would be on crutches.

Dealing with crutches was hard enough; did I really want to have the extra weight of a carry gun and a couple magazines? Would they get in the way of using the crutches? Would I be able to effectively draw my weapon if needed?

As these thoughts swirled through my head, I recalled the point made in Lesson 1 of the USCCA Concealed Carry and Home Defense Fundamentals course: “Don’t look like a victim.” It was with this thought in mind that I grabbed my gear and made my way out the door. However, I soon realized that carrying while temporarily disabled would mean some adjustments to the way I carry, not to mention draw, my weapon.

My LCP is fitted with a Crimson Trace LG-431 Laserguard, which alone helps me get on target more quickly when having to work around crutches. It is also equipped with a Hogue 18110 grip designed to work with the Crimson Trace laser. My hands are slightly larger than most, so the extra grip and rubber texture ensures a firm grasp of the firearm while still allowing me to activate the laser.

When changing out your carry weapon, it will also likely mean switching out how you carry it. For the LCP, I chose the Mitch Rosen OWB and a Trayvax belt. The belt is light and infinitely adjustable, and the holster has a slight curve and sits tight to my body. Even better, the holster is also designed to accommodate the laser.

I’m in the habit of training with my carry gun more than any other, so this meant more range time with the LCP. Not only did I have to spend time on the firing line acclimating to the LCP, I needed to practice drawing while on crutches. To do this, I picked a safe place in my home — the fireplace wall, which is brick — and ensured my gun was unloaded and there was no live ammunition in the room. This should be standard protocol for all dry-fire training.

I found that the best method of drawing while on crutches was to let the crutch on my firing side fall forward while keeping the other crutch in place for support, which had the added benefit of placing an obstacle in the path of a potential attacker. Albeit a small obstacle, it still may cause an assailant to stumble and buy me a half a second or so. If an attacker is rushing you, another option is to use the firing-side crutch to push the attacker away while simultaneously dropping the crutch and drawing your weapon.

After carrying on crutches for a few weeks, I needed to travel out of town to an event that required a lot of walking. It is not uncommon to walk 10 to 12 miles a day during this three-day event, and the thought of doing so on crutches was unpalatable. Fortunately, I was able to borrow an electric scooter. You can probably see where this is headed: more changes and more practice.

The scooter came with armrests that made drawing from a strong-side holster difficult. Although the armrests were removable, I chose to leave them in place for comfort during the long days. During the warm summer months when I don’t have an extra layer to use for concealment, I use the Select Carry Pistol Pouch from 5.11 Tactical. I can comfortably carry my M&P 9C and an extra magazine in it, and it also has side pockets that allow me to hold a tourniquet and some QuikClot combat gauze. For my time on the electric scooter, I chose this configuration, wearing the pouch at about 10 o’clock on my waist in a crossdraw configuration.

With this change in carry method, I also changed my practice routine. In the unlikely event that I would need to draw my weapon, reaching for it from a holster on my firing side while it was in a pouch on my support side would waste precious seconds. Practicing this carry and draw method also reinforced the awareness that when crossdrawing, you risk muzzling yourself and others as you rotate the weapon into position.

Another area that required some practice was tactical and emergency reloads. One of the reasons I like to carry the M&P 9C is the double-stack capacity, and in my everyday carry configuration, I would have three 12-round magazines and one round in the chamber. Moving to the LCP while on crutches meant carrying three six-round magazines and one in the chamber; in other words, I was carrying half as many rounds and would more than likely need to reload were I to find myself in a shooting situation.

In a tactical reload, you’re reloading your weapon even if the magazine is not empty. You have a break in defending yourself and you elect to replace your partially depleted magazine with a fresh one. While on crutches, I practiced keeping the crutch on my support side in place while I reached through it to retrieve a fresh magazine. I then pulled the magazine through the crutch and continued with a normal reload. I then placed the partially used magazine in my pocket on my support side.

The mechanics of an emergency reload — reloading because your pistol is entirely out of ammunition — were the same in my situation. I practiced retrieving a fresh magazine in the same way as a tactical reload, while also stripping the spent magazine and letting it fall to the ground.

The challenge with an emergency reload is speed. As a result of your limited mobility, you may not be able to get to cover or concealment. I found myself often dropping my support-side crutch in practice. Realizing this is a likely scenario, I continued practicing disregarding the fallen crutch and allowing my strong leg to support my weight.

I also practiced reloads from a seated position in the scooter while wearing the Pistol Pouch. Being in a seated position provided a firmer foundation for the tactical and emergency reloads, but if you choose to use the Pistol Pouch, please be aware that there is a pull-tab that allows quick access to the weapon and that the pouch then remains open while you shoot. This is important to remember because your extra magazine is secured in the open flap and, if inserted incorrectly, could fall out. If inserted correctly, the floorplate or finger guard will catch and keep the magazine in place.

With a couple of different ways to carry and some practice under my belt, I began to consider cover and concealment. Being disabled makes getting to cover and concealment more difficult, and I had to change my mindset a bit. While I’ve always scanned my surroundings for cover and concealment, my limited mobility made it more important that I proactively consider my options. I found myself balancing staying far enough away from an object that could conceal me from an attacker and being close enough that I could use that same object to my advantage if needed.

BACK IN THE GAME

I’m happy to say that the crutches have been put away, the scooter has been returned to its owner, and I’m back to my original everyday gear and habits. I share my journey with you not because my specific choices would necessarily be the perfect fit for you but because I hope doing so presents an example of how one man adapted to his circumstances. My choices made sense for my leg injury, but what will you do if your strong-side arm is in a sling? How will you lift your concealment garment if your support-side hand is bandaged closed? How will you get a sight picture if your dominant eye is covered in a patch?

Don’t become a victim by setting aside your everyday carry gear until you heal.

Next post: Enter the Steyr Elite Experience Giveaway! $10K in Guns & Training Up for Grabs