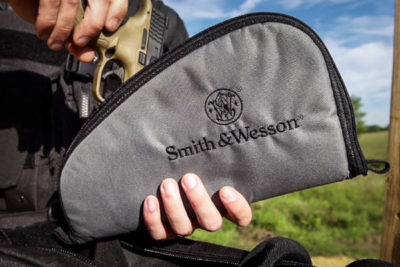 Investors voted Tuesday to force the gun maker to account for its role in “gun violence” in the United States (Photo: Smith & Wesson Facebook)

The anti-gun lobby has shifted its focus since Parkland from the legislatures to the marketplace, and they’ve acquired a new target in their efforts to destroy the financial viability of gun companies: investors.

Top investors in Smith & Wesson’s parent company, American Outdoor Brands (AOB), passed a resolution this week at their annual shareholder’s meeting that forces AOB to publish a report on the company’s role in “gun violence.” Investors want the gun maker to prove that it is adequately addressing the “risks” inherent in its products’ association with gun-related violence and to show evidence the company is exploring ways to reduce this violence by making guns safer.

The efforts were led by a coalition of religious groups organized under The Interfaith Center on Corporate Responsibility, and backed by big fund companies like BlackRock and Vanguard, which together own about one-fifth of AOB. Investors pulled a similar stunt earlier this year at Ruger’s annual meeting.

“The majority of guns used in crimes in major U.S. cities are AOBC guns,” said Sister Judy Bryon, who introduced the proposal. “Each event brings new threats of lawsuits, boycotts, divestment and demonstrations — and along with them, a wave of damaging news stories about gun companies and their inability to make their products safer for civilians, and most critically, to help prevent their misuse by children.”

American Outdoor Brands CEO James Debney called the vote “politically motivated” and said he was “disappointed” the shareholders had taken their fight to the annual meeting rather than work through legislatures, according to CNBC.

The political, rather than strictly financial, nature of the resolution is evident from the gleefulness with which it was celebrated by anti-gun organizations.

“Just one year ago, it was unthinkable that shareholders would demand that gun manufacturers examine their own role in America’s gun violence epidemic,” said Avery Gardiner, the co-president of the Brady Campaign, in a statement on Tuesday. “Now, it’s becoming the norm.”

It’s also worth noting that AOB responded in March to a list of questions submitted by BlackRock. The company’s eight-page letter outlines its involvement in gun safety efforts, its support of the “fix NICS” initiative, its close work with the ATF, its responsible business practices, and its team of lawyers and compliance experts.

SEE ALSO: When it Comes to Guns, Smart is Stupid

The real financial risk, they explain, is not from negative press coverage, but from betraying their customers by supporting gun control policies and initiatives.

“The solution is not to take a politically motivated action that has an adverse impact on our company, our employees, our industry, our shareholders, the economies we support and, significantly, the rights of our law-abiding customers, but results in no increase in public safety,” the letter concludes. “We must collectively have the courage to ensure any actions are guided by data, by facts, and by what will actually make us safer –not by what is easy, expedient, or reads well in a headline.”

Rather than come to an agreement internally, virtue-signaling investors opted for the public resolution at Tuesday’s meeting. AOB is under no legal obligation to adhere to the resolution, and Debney has not publicly committed to commissioning the report.