Pennsylvania Governor Calls for Total Ban on all Semi-Automatic Weapons 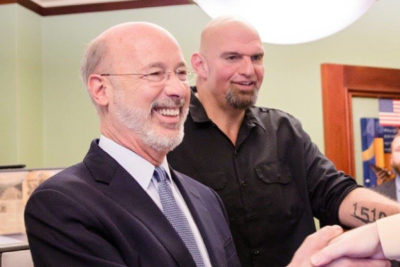 Just one day after a gun-rights rally in Pittsburgh that attracted hundreds of gun owners protesting the city’s proposed “assault weapons” ban, Democratic Pennsylvania Governor Tom Wolf voiced his support for a complete ban on all semi-automatic weapons.

When asked by KDKR Newsradio host Larry Richert whether the state of Pennsylvania should restrict or eliminate semi-automatic weapons, Gov. Wolf responded, “I think they should. I support that. Those are the weapons that killed those innocent people in Squirrel Hill and have done so much damage in schools and in places all around the country. We shouldn’t have those [guns].”

Though Wolf incorporates all semi-automatic firearms in his answer to Richert’s question (the Squirrel Hill murderer used handguns and a rifle), he walked back his stance later that day in a tweet that only mentioned “semi-automatic rifles.”

It’s time for Pennsylvania to have a conversation about restricting semi-automatic rifles. Dangerous people should not have easy access to the weapons that killed innocent victims in Pittsburgh. https://t.co/o8eklMmeEr

The governor doesn’t want to take away anyone’s guns, of course. Later in the segment, Richert commented, “People from one side or the other go to the complete extreme – you’re trying to take away my weapons, and that’s not the case.”

And yet, the head of Pennsylvania’s executive branch hopes the state legislature will implement restrictions on gun ownership similar to those proposed by Pittsburgh’s city council, which include a ban on some semi-automatic rifles.

But Gov. Wolf hopes the legislature will sign on to Peduto’s proposals.

“I mean even the president is talking about eliminating, making bump stocks illegal. I think we ought to have a universal background check,” he said on KDKR. “We should not have people (with) easy access to the weapons that killed all those innocent victims in Squirrel Hill. We’re all in different ways trying to figure out what is the way to recognize the rights of gun owners but also make ourselves safe. I think this is a good conversation to have.”