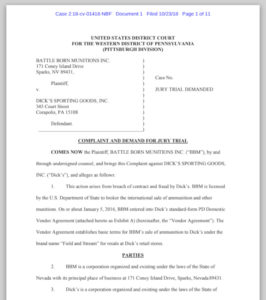 Battle Born Munitions is taking Dick’s Sporting Goods to court, accusing them of shady business practices that wound up costing the company over $5 million. Battle Born is looking to get their millions back plus just over $200,000 in damages.

The lawsuit makes the case that Dick’s Sporting Goods warehoused Battle Born ammo – under Dick’s Field and Stream house brand – in an attempt to inflate their stock value.

In the process of tying up millions of dollars’ worth of ammo, Dick’s delayed making payments on schedule to Battle Born Munitions. This would leave Battle Born unable to hold up their end of a deal with the state of Lebanon for 12 Bell helicopters, costing them even more.

The lawsuit accuses Dick’s on three counts including breach of contract, fraudulent inducement, and negligent misrepresentation.

“Dick’s ordered excessive amounts of ammunition branded with their house brand, ‘Field & Stream,'” reads the complaint. “Vendors were unable to re-sell the branded ammunition to a third-party due to Dick’s branding, both on boxes and head stamp.

“Vendors had no option but to involuntarily warehouse the ammunition on Dick’s behalf until such time as Dick’s determined that demand was sufficiently high for it to manipulate retail prices,” it continues. “To this end, Dick’s failed to make any reasonable effort to market the house-brand ammunition during the key holiday-season sales period.”

Battle Born had plans to use the earnings as a down payment on 12 Bell helicopters. The company spent over a year dealing with the government of Lebanon and the United States to gain approval for the deal.

Allegedly, because Dick’s failed to pay in time and in full, Battle Born was unable to go forward with the deal, said to be worth over $37 million. It’s becoming apparent that it’s not just politics driving vendors and customers away, it’s also bad business.

This would hardly be the first time that Dick’s has turned it’s back on gun owners and the gun industry. The company has taken a pro-gun-control stance, limiting the sale of guns to only people 21 and over and no longer selling modern sporting rifles.

As a result, not only have gun owners begun boycotting Dick’s, prominent vendors like Mossberg and Springfield have severed business ties with the company.

Next post: The Webley Revolver: The Seminal British Combat Wheelgun

Previous post: Don’t Vote for the Gun-Grabber! Use NSSF’s Congressional Scorecard for Midterms