Hogg Explains Why He Was Ready for Media Interviews Following Parkland 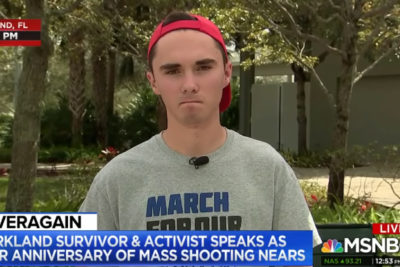 Hogg has been making the national media circuit on the anniversary of the Parkland massacre.

David Hogg was ready to launch his career in the public spotlight almost before the man who killed 17 of his teachers and classmates at Marjory Stoneman Douglas High School had been taken into custody. Hogg appeared on multiple national news outlets hours after the massacre with a carefully crafted gun ban pitch the American public was ready and willing to hear.

One year after the tragedy, Hogg is still working the national media circuit. He’s flipped his experience at Parkland into an acceptance letter from Harvard, nearly one million Twitter followers, and national name recognition that will serve him in good stead during his inevitable run for office.

Hogg recently appeared on CNN to try to explain how he was so prepared to take advantage of the massacre.

“I think it was two classes I had taken throughout my high school career,” he said, “which were speech and debate, where we previously had to debate things like universal background checks and the digitization of ATF records. And also my experience in TV production as the school’s TV news anchor co-host and also news director.”

Hogg also appeared on MSNBC this week, where he argued that people who use an AR-15 for self-defense are “hunting a human being” because AR-15’s “have an effective range of over 1500 meters.”

MSNBC host Andrea Mitchell asked Hogg about his experience working with the relatives of the 17 people killed in Parkland to pass gun ban laws in states around the country.

“Sometimes it does have to be state-by-state,” he said. “Even at the state level, sometimes they don’t want to work with us. That’s why in Florida yesterday along with several family members of people that were lost in the shooting at my high school, we introduced a ballot initiative that we are working on getting right now to ban assault weapons in the state like the one that the shooter at my high school used so that no other person can get their hands on them.”

“The truth of the matter is weapons like the AR-15 have an effective range of over 1500 meters,” he added, in his best high school speech and debate style. “If you’re using the weapon within an effective range of over 1500 meters you are not defending yourself, you are hunting a human being. And I don’t think any civilian needs to have their hands on a military weapon like that.”

While he’s expressed interest in running for national office, he’s rooting for Michelle Obama to run in 2020 to “end this madness already.”

I wish @MichelleObama would run for president and end this madness already.

Next post: Walther Unveils New Program: Try a PPQ for 30 Days – No Money Down & Free Shipping!

Previous post: The Guns of the St. Valentine’s Day Massacre: Al Capone Gets Away with Murder