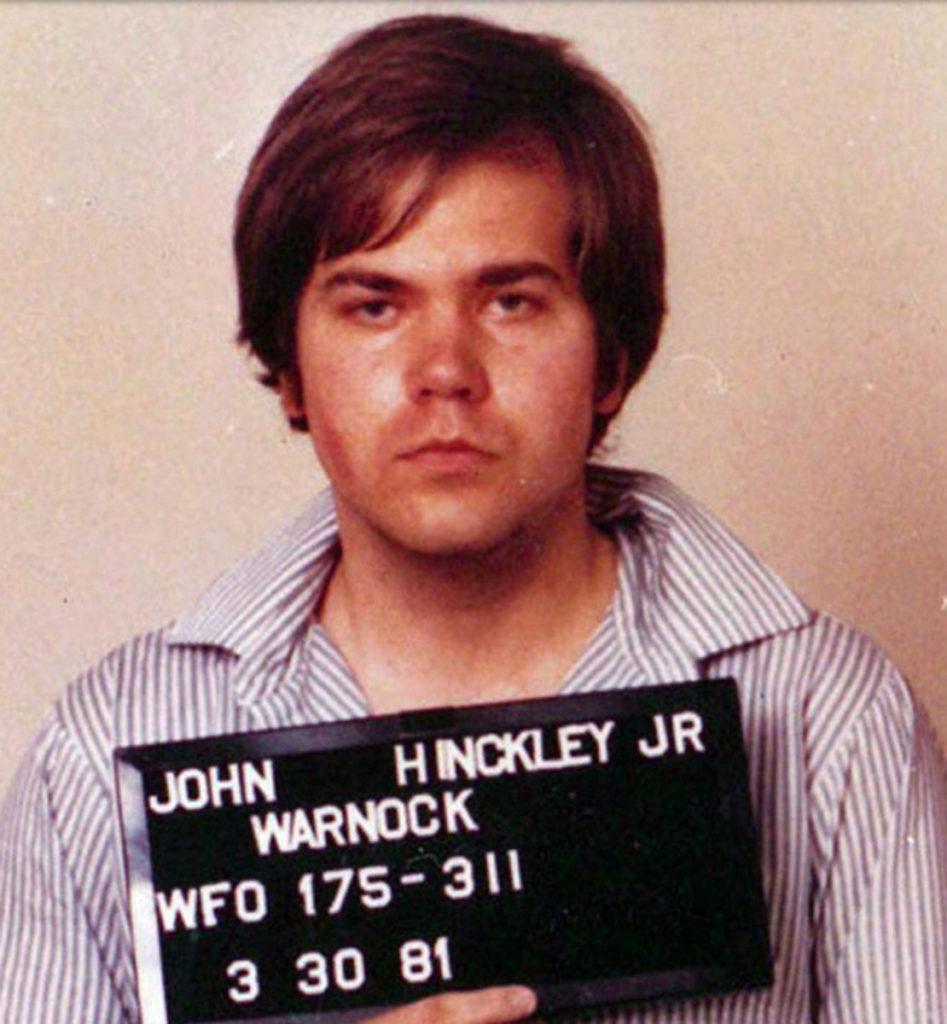 John Hinckley suffered from sundry mental illnesses, but Borderline Personality Disorder seems like his alpha dysfunction. His particular flavor of crazy took him to some very dark places.

The medical term is erotomania. This is a rare condition wherein a mentally ill person becomes fixated on another, typically someone of a higher or untouchable social or economic state. This fascinating bit of psychopathology can drive those so afflicted to some most remarkable lengths.

John Warnock Hinckley Jr. was born in 1955 to a wealthy family in Ardmore, Oklahoma. The youngest of three siblings, John was a popular kid in grade school. He learned to play the piano, was active in sports, and was elected class president twice. 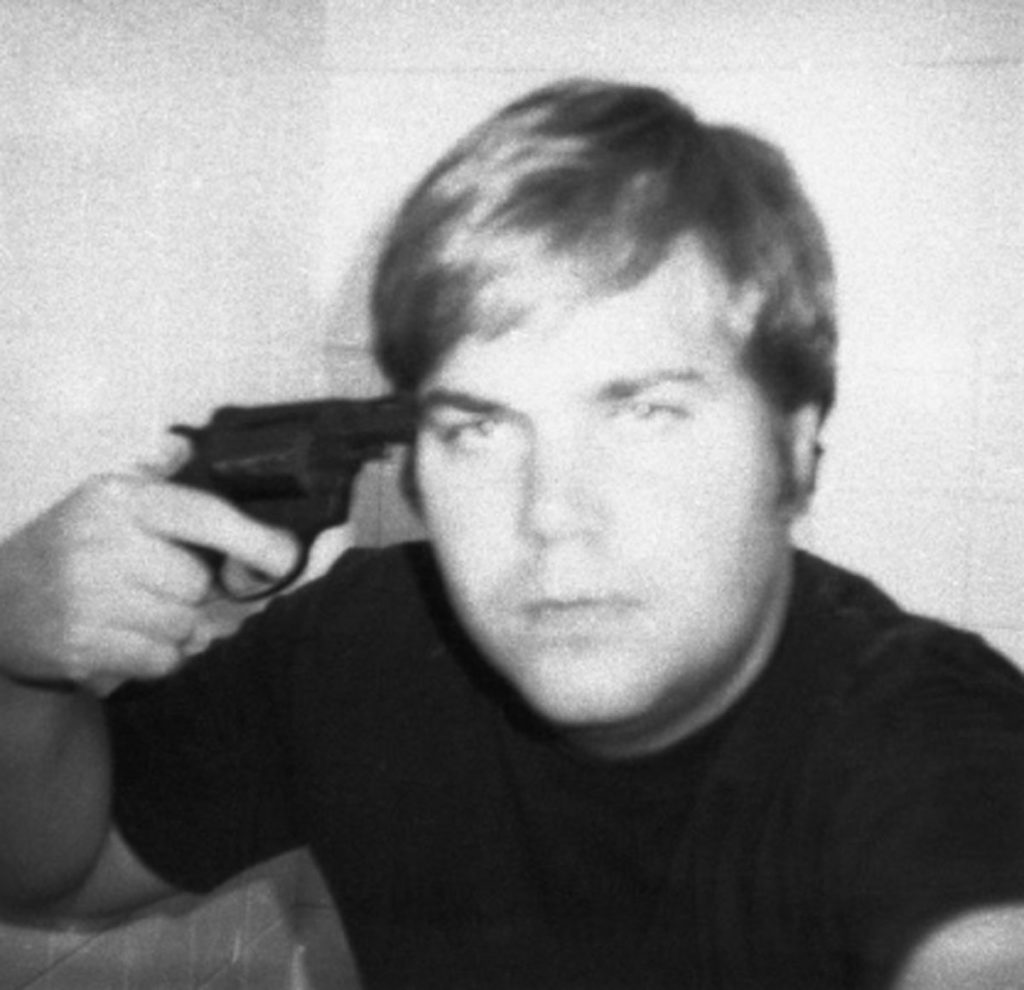 John Hinckley struggled to fit into a world he was not equipped to understand.

Hinckley attempted college but dropped out. He tried to make it as a songwriter in California, but that fizzled as well. As his personal life started to circle the drain he was prescribed psychotropic medications. Then in 1976, a 21-year-old John Hinckley watched a movie that changed his life. 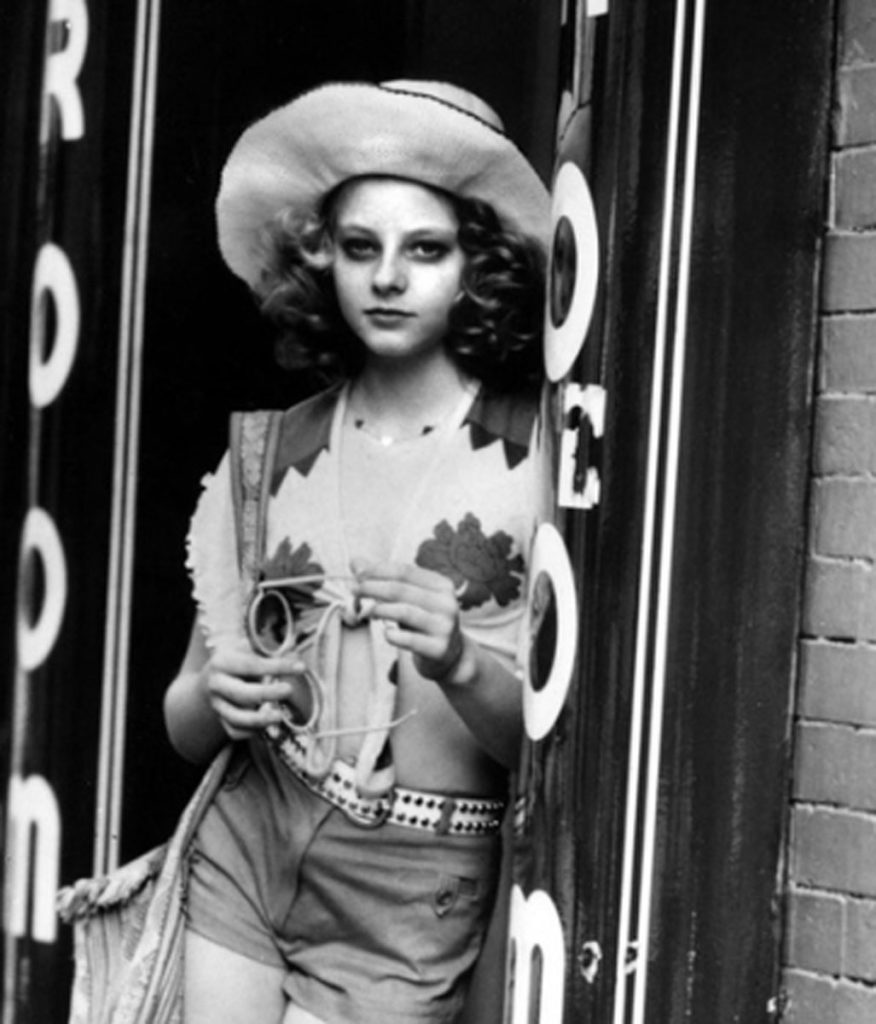 For some unfathomable reason, Hinckley developed an irrational fixation on the actress Jodie Foster.

Taxi Driver starred Jodie Foster as an underage prostitute. Hinckley saw the movie fifteen times in the theater. Someplace deep in his troubled brain, a little switch flipped, and it was game on. Hinckley became convinced that he and Jodie Foster were destined to be together. When asked later what he thought about at night he responded, “Jodie, Jodie, Jodie, and then there’s Jodie…”

Love Unrequited Can Be a Powerful Force Indeed 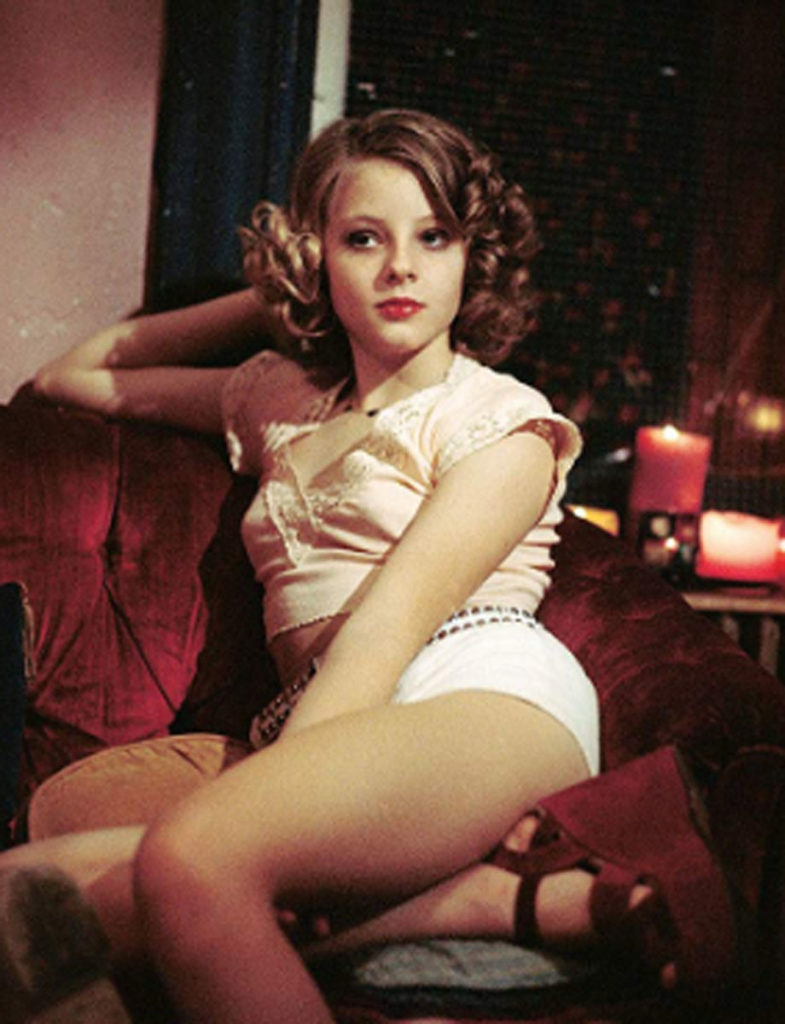 John Hinckley invested his life in attempting to connect with Jodie Foster.

Hinckley pursued Jodie Foster to New Haven, Connecticut, where Ms. Foster attended Yale University. John took a writing class there in an effort at making contact. He slipped notes underneath her dorm room door and actually spoke with her twice on the phone. When it became obvious that Jodie was not impressed, John determined it was time for drastic measures. John Hinckley would kill the President. 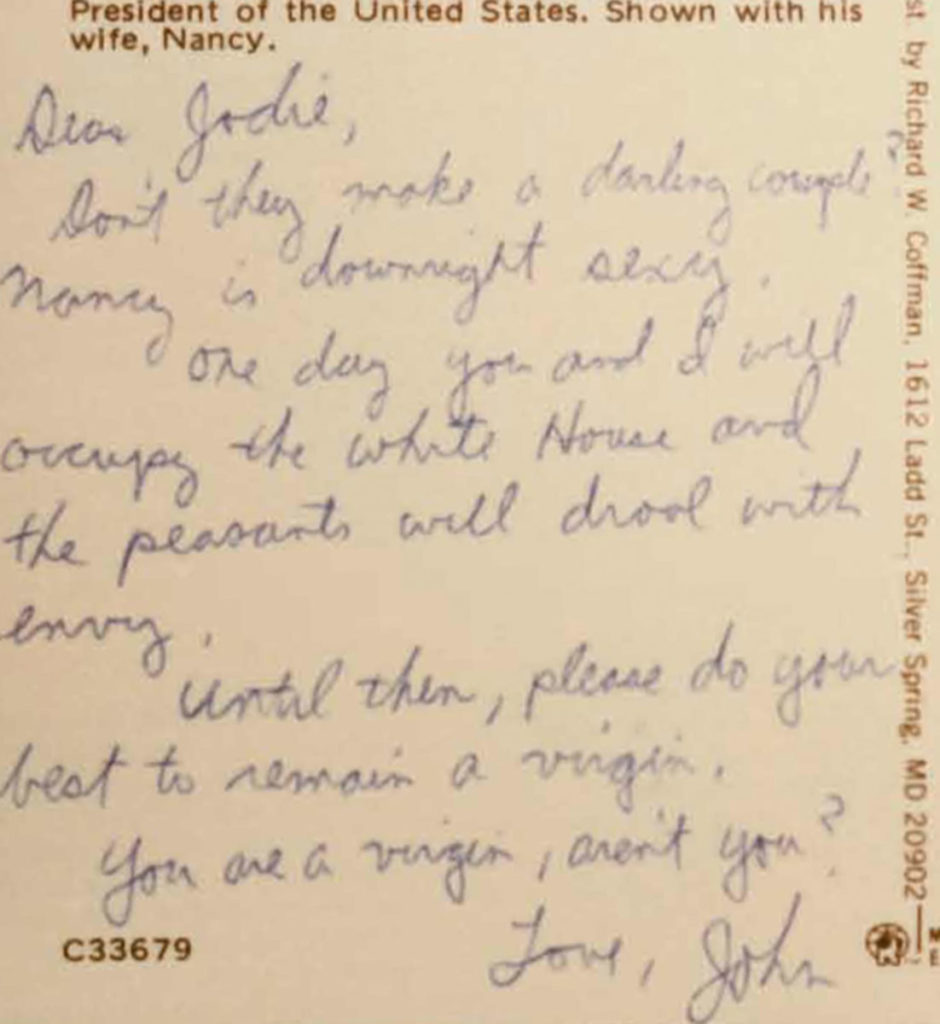 Hinckley wrote Foster dozens of creepy letters, slipping them underneath the door to her dorm room.

Hinckley became oddly convinced that if only he could assassinate President Jimmy Carter then Jodie Foster would become instantly smitten with him. He trailed President Carter through several states and at one point got close enough to touch him. He was eventually arrested in Nashville for possession of a firearm in an airport. 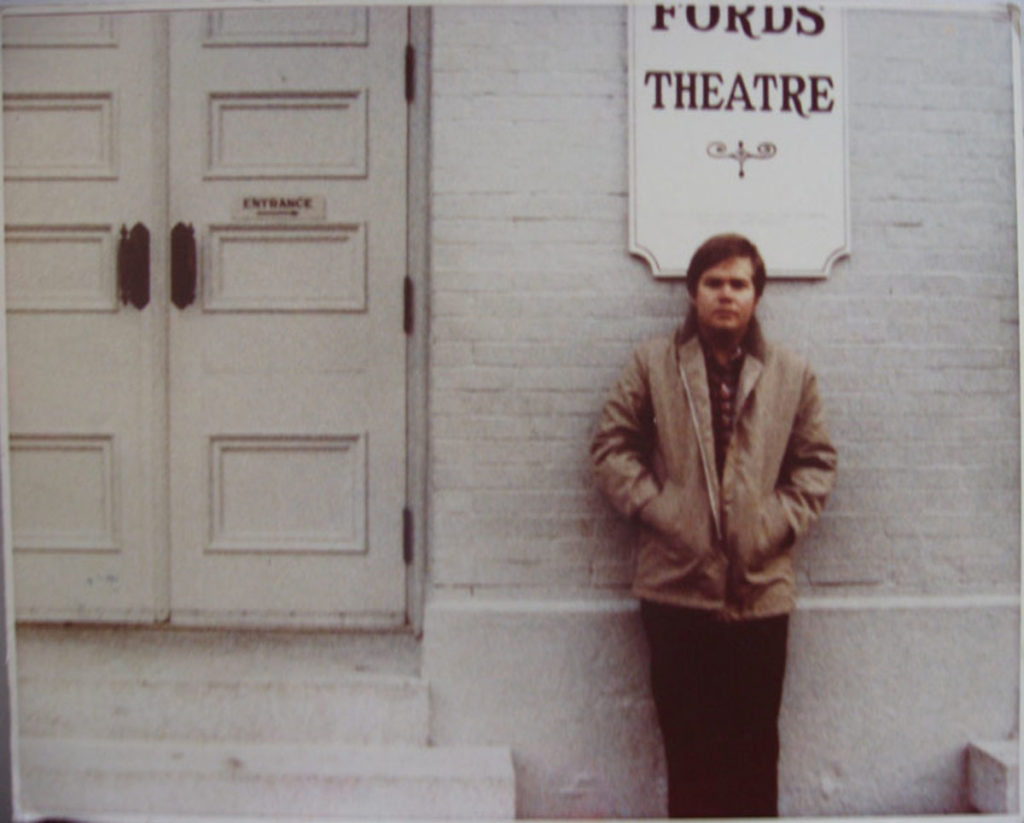 John Hinckley never quite broke the code on how to impress girls. Here Hinckley is shown outside Ford’s Theater where John Wilkes Booth shot and killed Abraham Lincoln.

After a literal lifetime of unremitting study and 31 years of marital bliss, I can honestly say I still don’t understand women very well. It seems John Hinckley was markedly more clueless than am I. 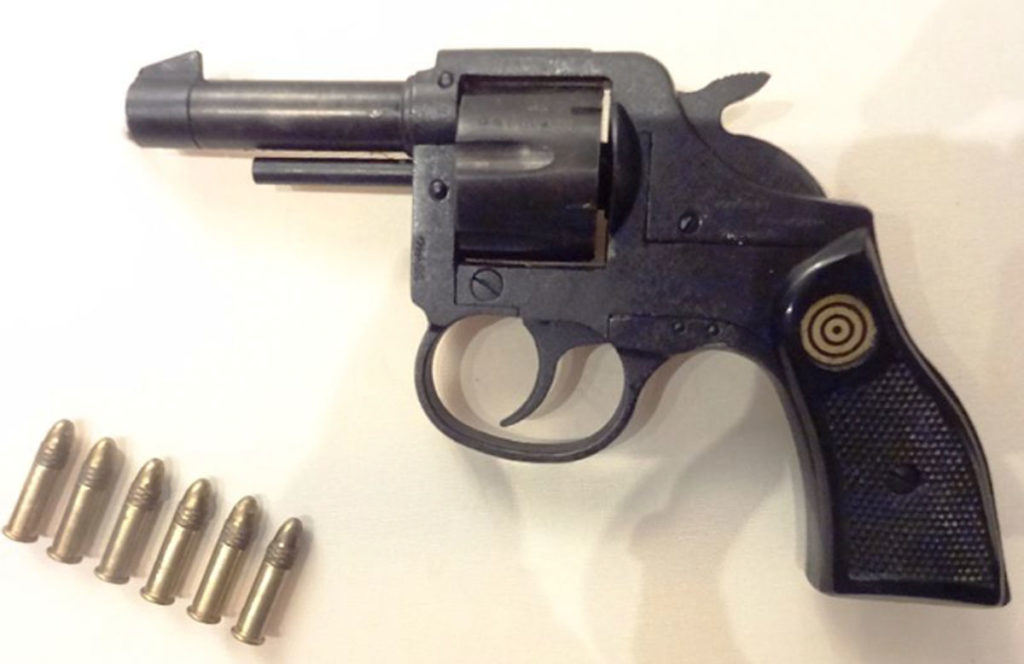 The Rohm RG-14 was the edible underpants of handguns. Thankfully it was all Hinckley could afford.

Being a professional creepy stalker apparently doesn’t pay terribly well, so Hinckley was fairly destitute by now. As a result, when he went to purchase a firearm from Rocky’s Pawn Shop in Dallas, Texas, the best he could afford was a craptastic Rohm RG-14 .22LR revolver. In an effort at making his uber-cheap pistol more effective he loaded it with .22LR Devastator explosive bullets. 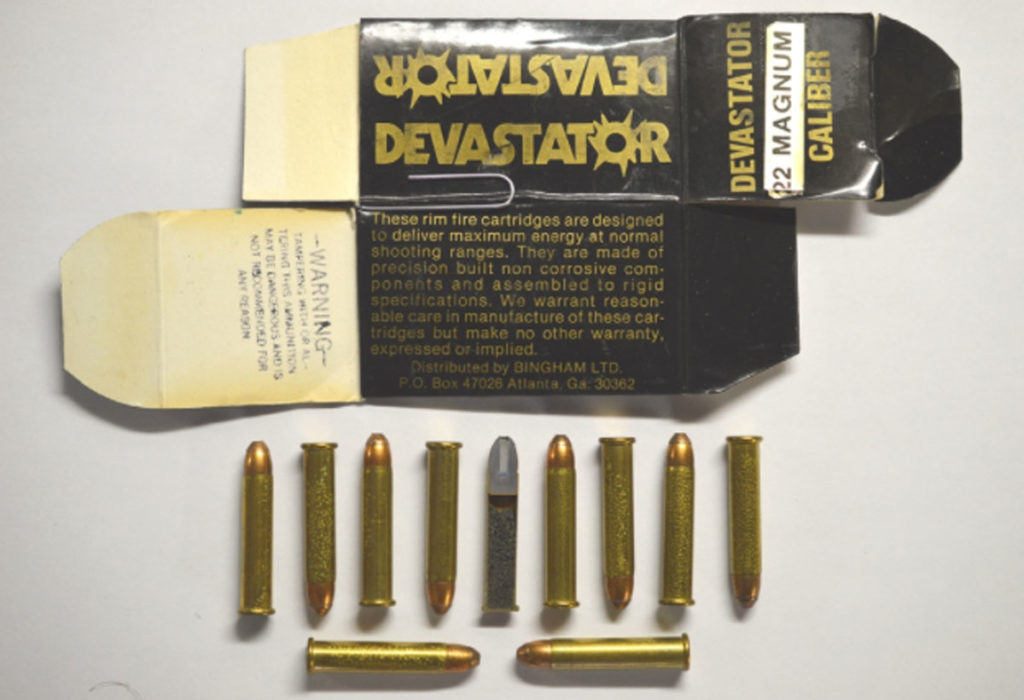 These hollowpoint bullets came packed with a small amount of shock-sensitive aluminum and lead azide explosive compound. Originally developed for use by Sky Marshals, the intent was to produce wounds disproportionate to the caliber of the firearm with minimal excessive penetration. 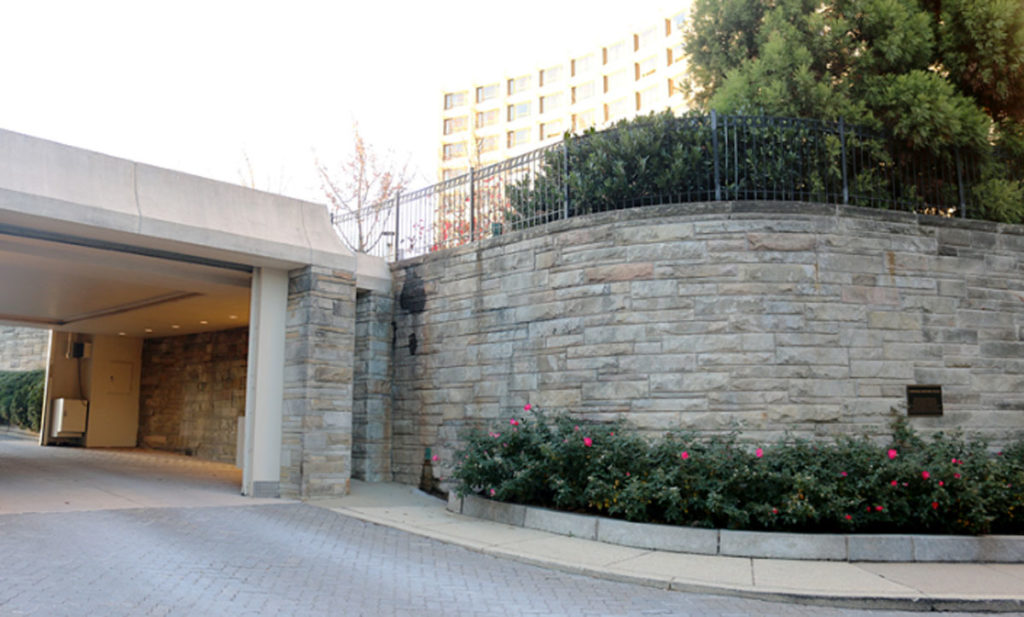 The venue for President Reagan’s speech this fateful day was considered fairly secure.

On March 30, 1981, Ronald Reagan was 69 days into his first term as President. Hinckley serendipitously discovered President Reagan’s schedule in The Washington Star and, thusly equipped, posted himself outside the Washington Hilton Hotel within a group of spectators. While attendees to Reagan’s speech to the AFL-CIO were thoroughly screened, the crowd outside got little scrutiny. The DC Hilton was considered a desirable venue because it had a covered “President’s Walk.” This walkway allowed VIPs access from the building to a waiting car with minimal exposure. On this particular day, Reagan stopped at his Presidential limousine to take a few questions. 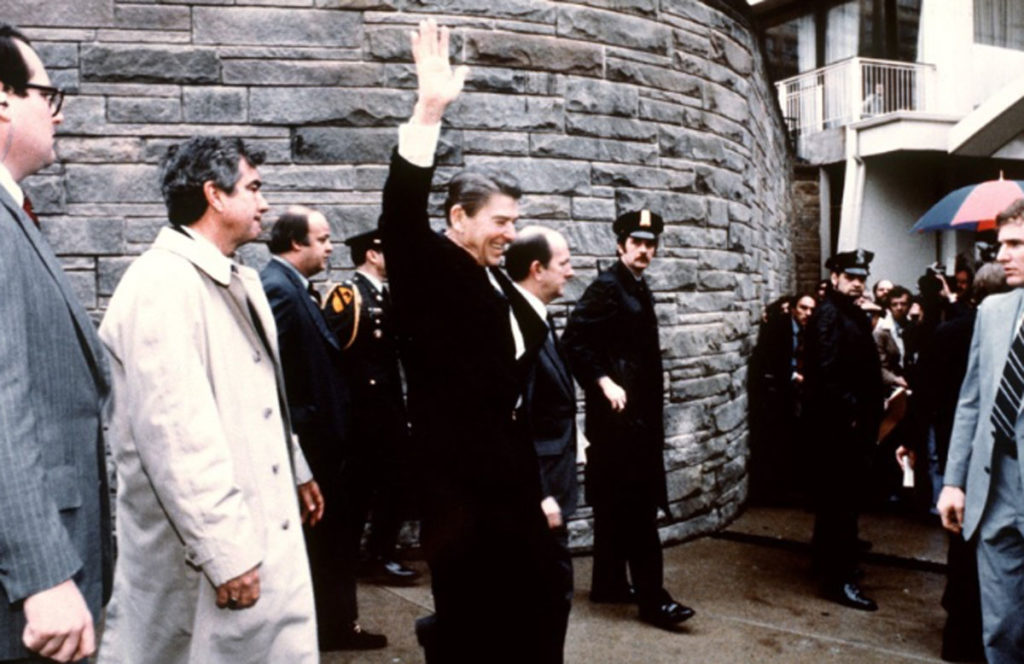 This image was captured moments before Hinckley pulled the trigger.

The Secret Service typically mandated that the President wear body armor when in public. Reagan demurred, as the exposure was only 30 feet between the hotel and his limo. As Reagan turned to take a question from Mike Putzel of the Associated Press, he unwittingly passed right in front of Hinckley. 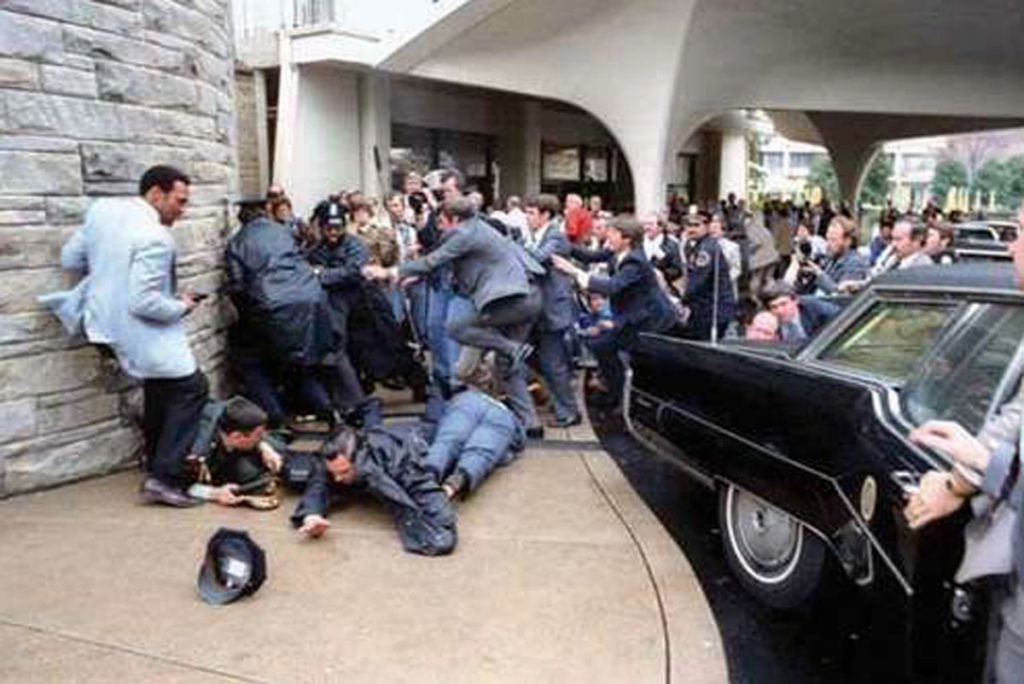 Hinckley emptied his handgun before the President’s security detail could stop him. 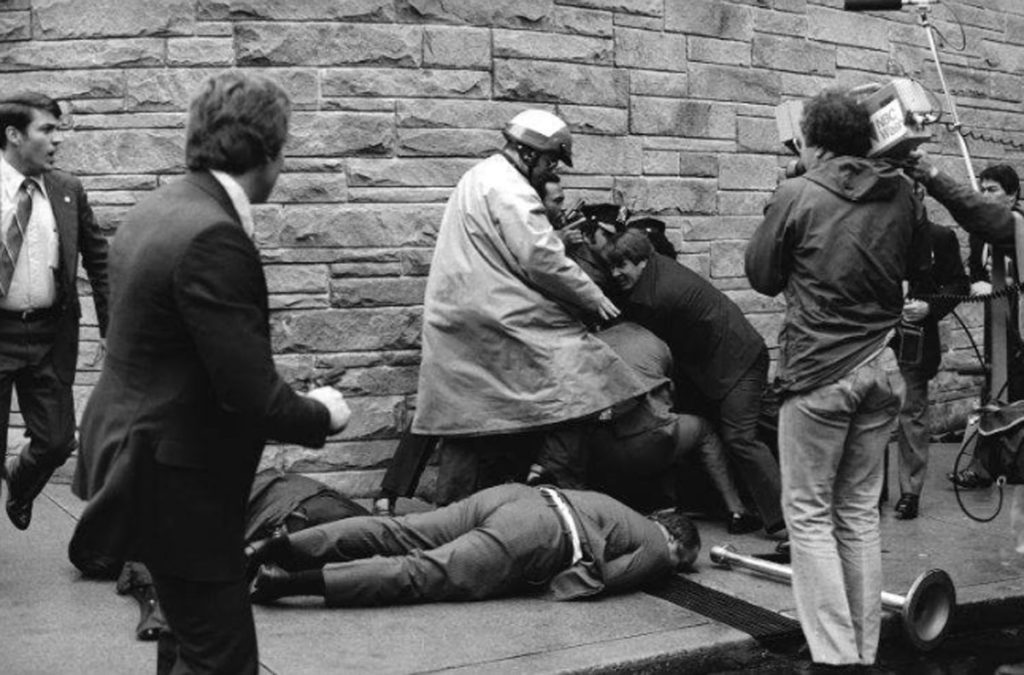 The first round struck White House Press Secretary James Brady in the head and detonated. The second struck DC police officer Thomas Delahanty in the back of the neck as he instinctively turned to protect the President. Hinckley now had a clear shot at Reagan but simply missed. This third bullet went high and struck a window in the building across the street. 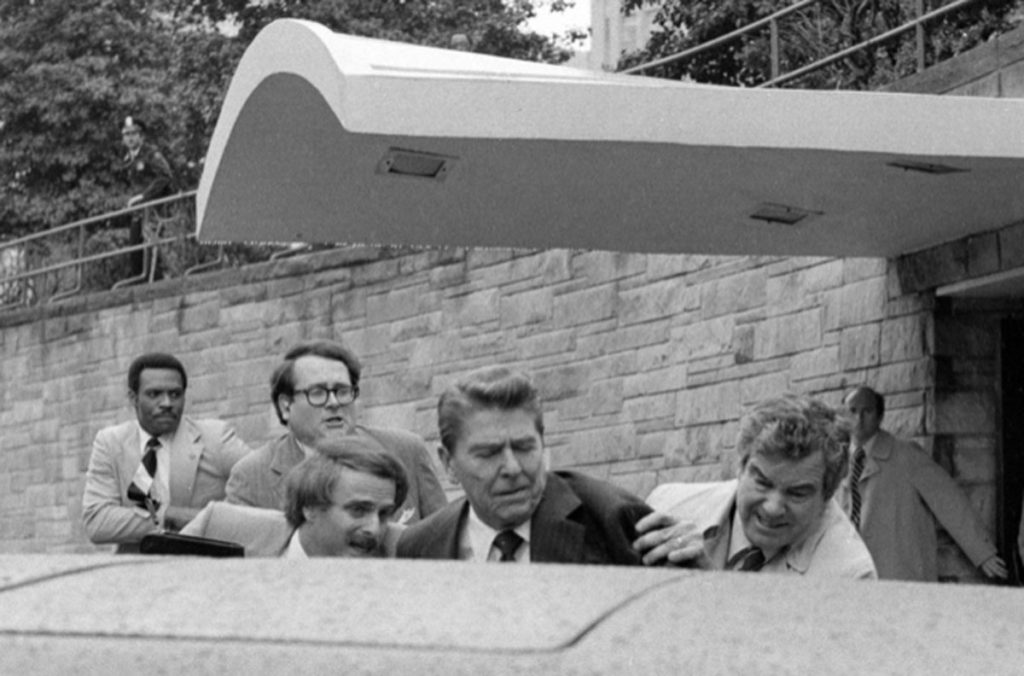 This image captures President Reagan immediately after he was hit. Special Agent in Charge Jerry Parr is on the right.

In a moment of reflexive selfless bravery, Secret Service Agent Tim McCarthy interposed himself between Hinckley and Reagan and caught the fourth round in the belly for his trouble. The fifth round struck the armored glass on Reagan’s limo. The sixth and final projectile struck a component of the armored limo, ricocheted, and entered President Reagan’s chest through his left armpit. 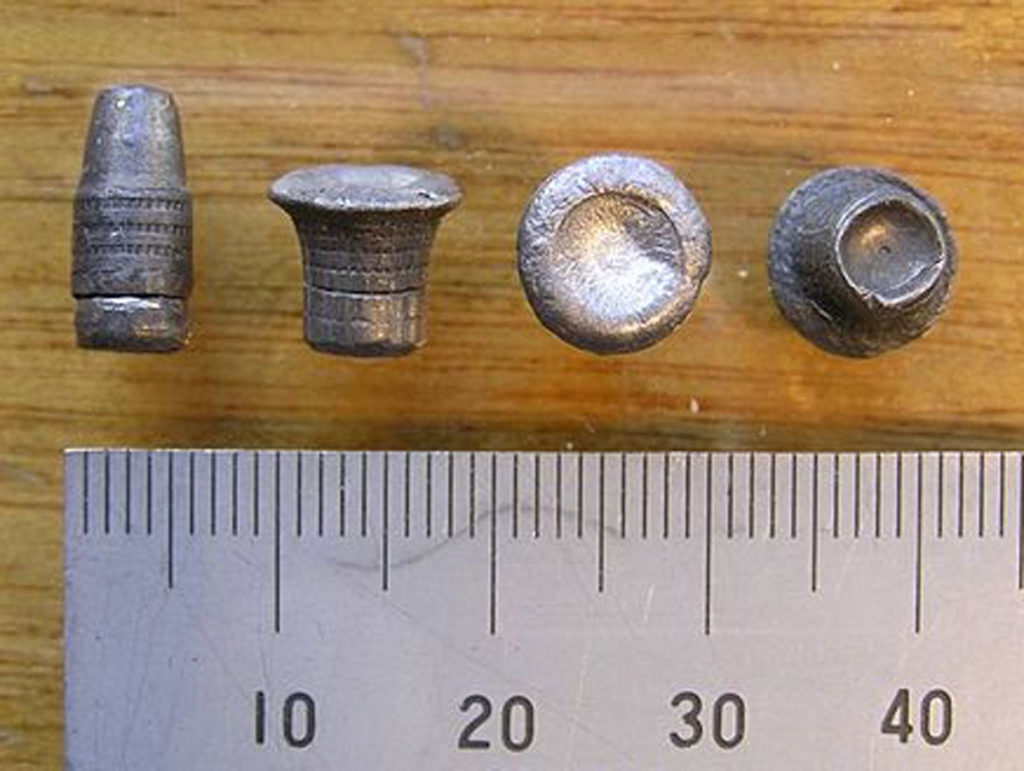 Bullets can do some of the unnatural things once they leave a firearm.

My own experience in an urban ER has shown that bullets can be almost supernaturally unpredictable. In the case of Reagan’s .22-caliber Devastator round the bullet grazed a rib and penetrated his left lung, stopping less than an inch from his heart. As Special Agent in Charge Jerry Parr had been necessarily rough in throwing Reagan into the limo it was assumed that the President’s immediate chest pain was the result of this harsh handling. When Reagan began spitting up frothy blood it became obvious that the situation was more dire.

Parr made the call to divert directly to George Washington hospital and likely saved the President’s life. When they arrived at the ER there were no gurneys readily available. President Reagan walked into the building without assistance, smiling at onlookers. Once inside he collapsed. 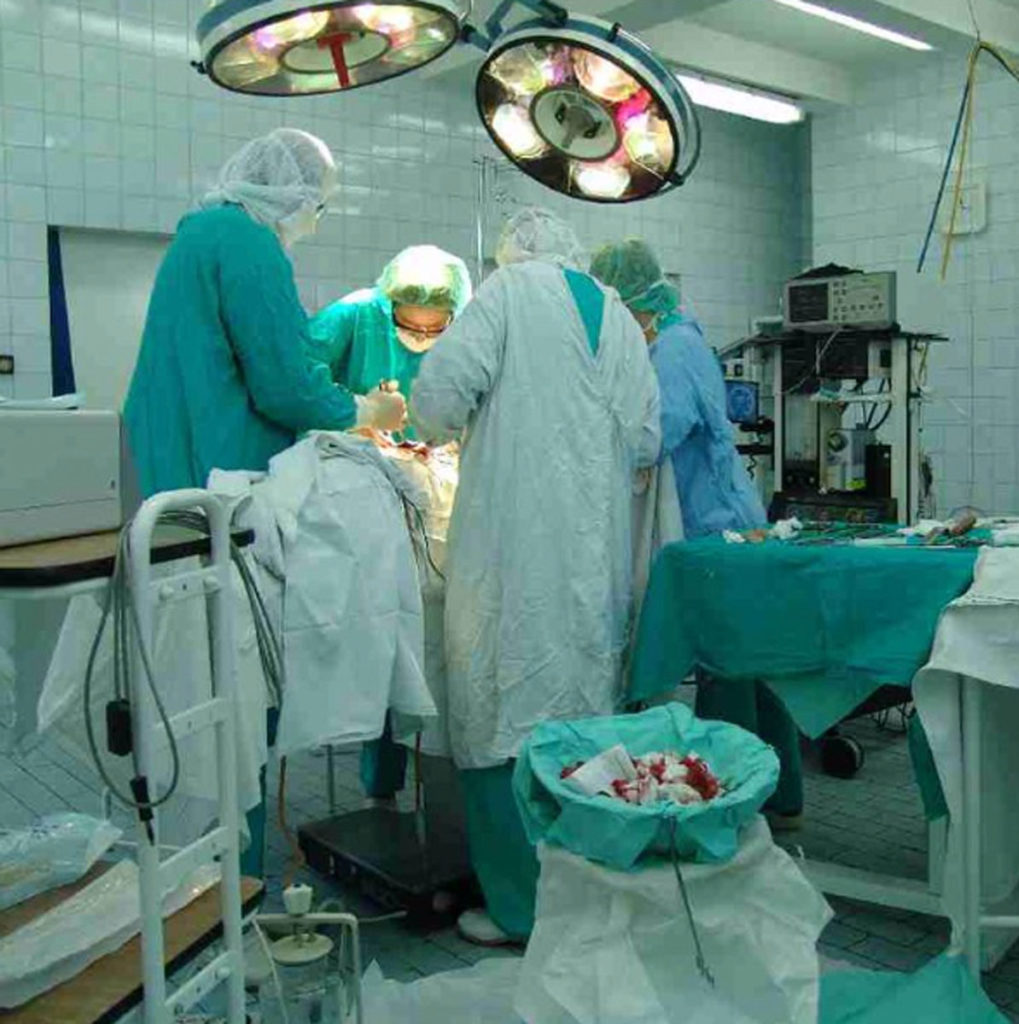 Drs. Benjamin Aaron and Joseph Giordano conducted an emergency thoracotomy on Reagan that took some 105 minutes. During this procedure, the President lost more than half his blood volume. Before going under, Reagan quipped to the OR staff, “Please tell me you’re Republicans.”

Dr. Giordano, a liberal Democrat, responded, “Today, Mr. President, we are all Republicans.” 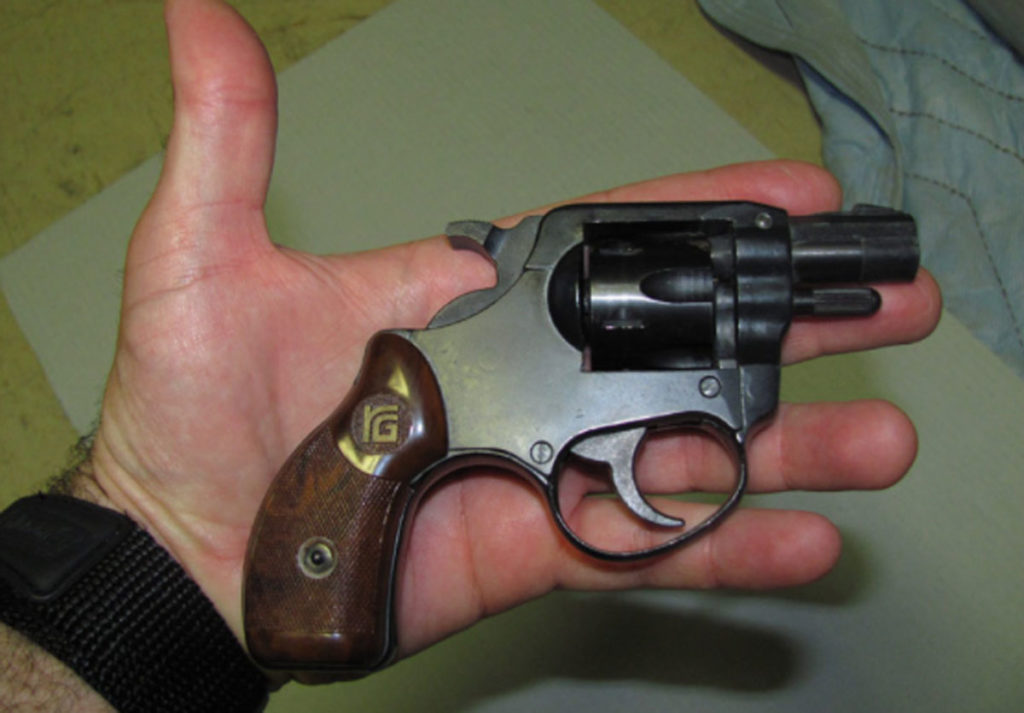 To call the Rohm Gesellschaft RG-14 a piece of crap does a disservice to crap. This cheap German revolver is proof positive that not everything the Germans design is a sterling example of the engineer’s art. The RG-14 is the archetypal Saturday Night Special. 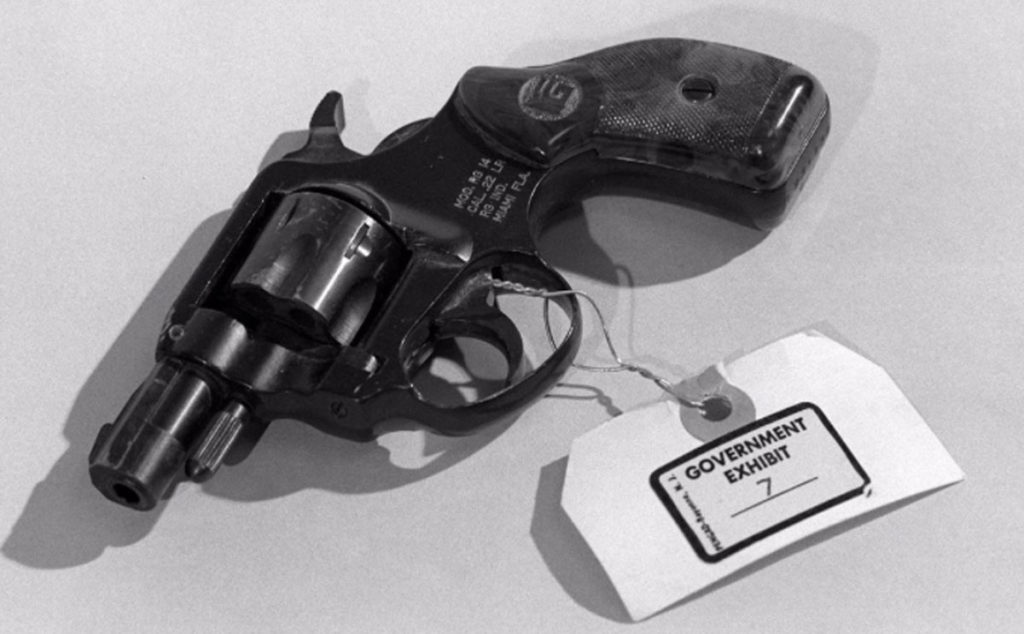 The RG-14 was designed from the outset to be inexpensive to produce.

The RG-14 sports a flimsy plastic front sight and comparably cheap plastic grips. The design is blocky and unattractive, while the large hammer tends to catch on things. However, the double action trigger is smooth and consistent. The single action trigger is actually surprisingly crisp. The gun holds the expected six rounds. 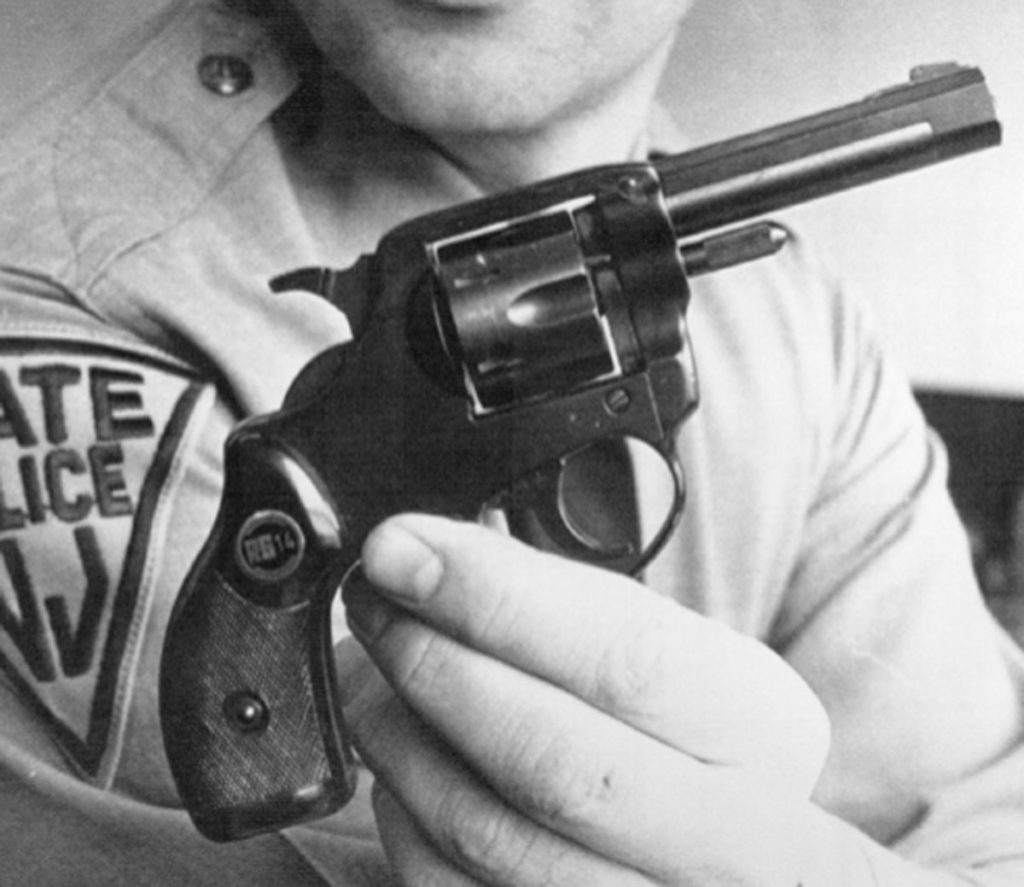 Hinckley had wanted a more serious firearm for his assassination attempt but could not afford anything spunkier than a .22.

The Gun Control Act of 1968 prohibited importation of small cheap handguns like the RG-14, so the RG Company undertook production in Miami. This factory closed for good in 1986. Sundry RG handguns were produced in .22, .25ACP, .32ACP, and .38 Special. 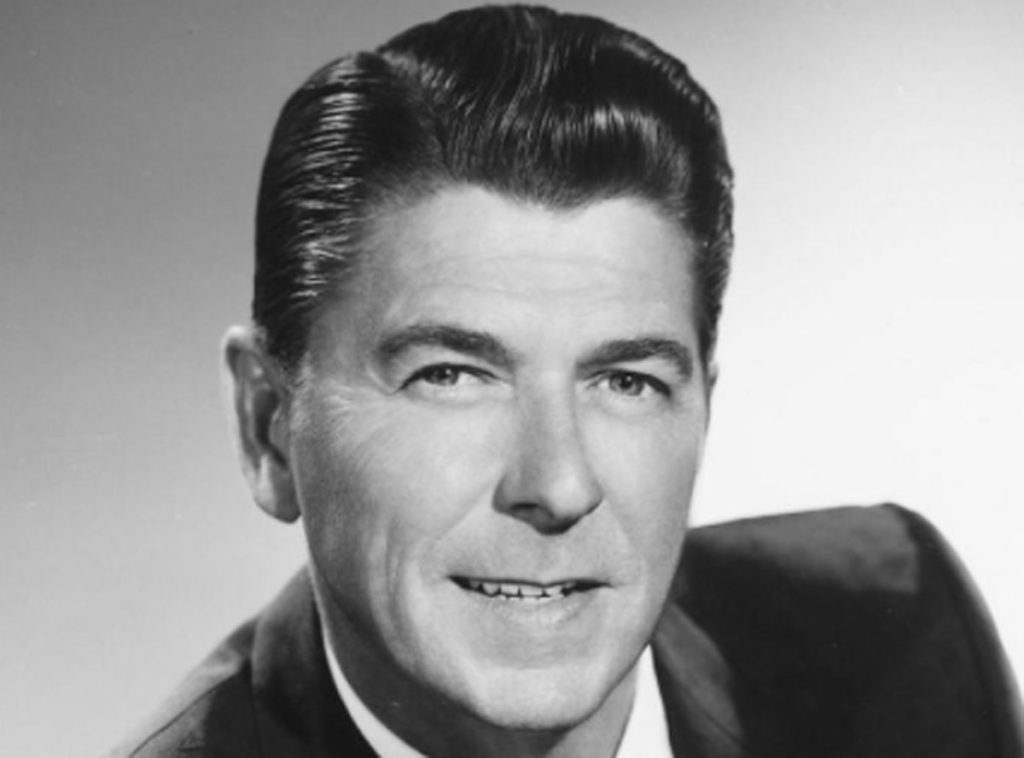 I am old enough to have voted for Ronald Reagan. He helped the country when it was a better, nicer, simpler place.

President Reagan was a stud, so he signed a piece of legislation the day after he lost half his blood volume. He spent thirteen days in the hospital. During this time his approval rating reached 73%. 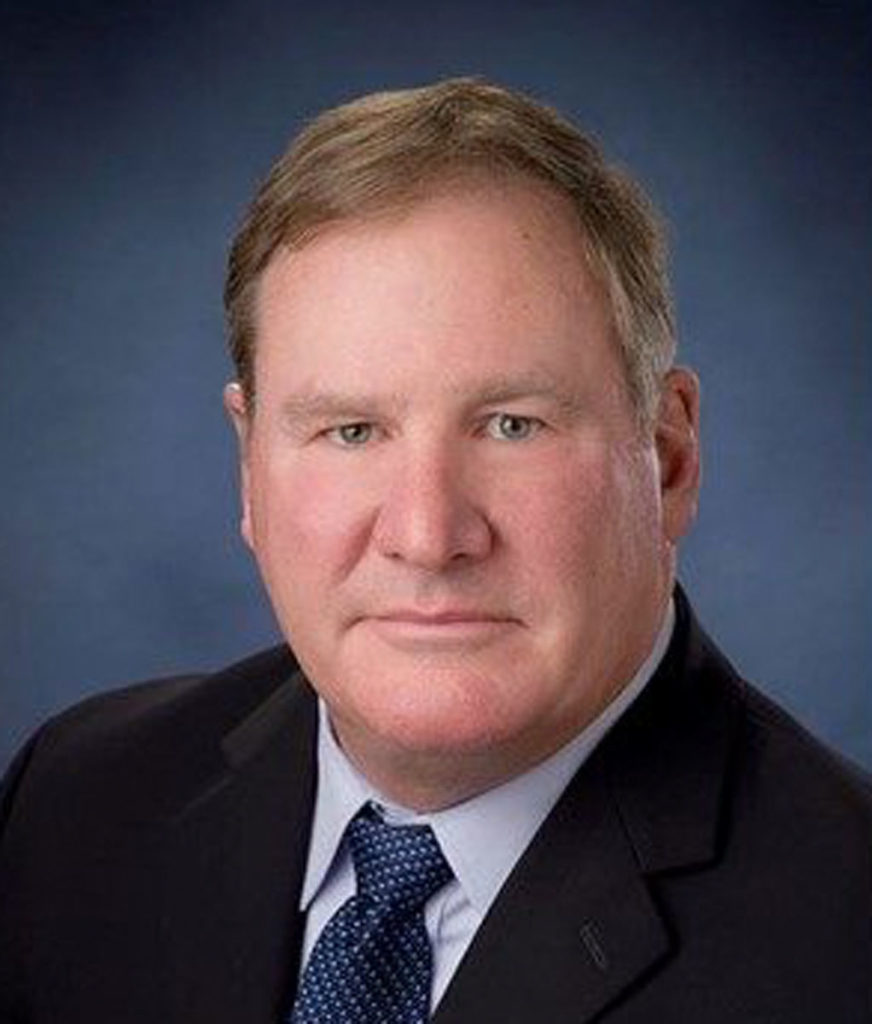 Taking a bullet for the President looks pretty good on your resume. Timothy McCarthy left the Secret Service and serves as the Police Chief of the Orland Park, Illinois, PD today.

Officer Delahanty had to be medically retired from the DC police force. Timothy McCarthy fully recovered and became the Police Chief in Orland Park, Illinois. Quite literally taking a bullet for the President probably made him a fairly compelling candidate for any Law Enforcement job on the planet. 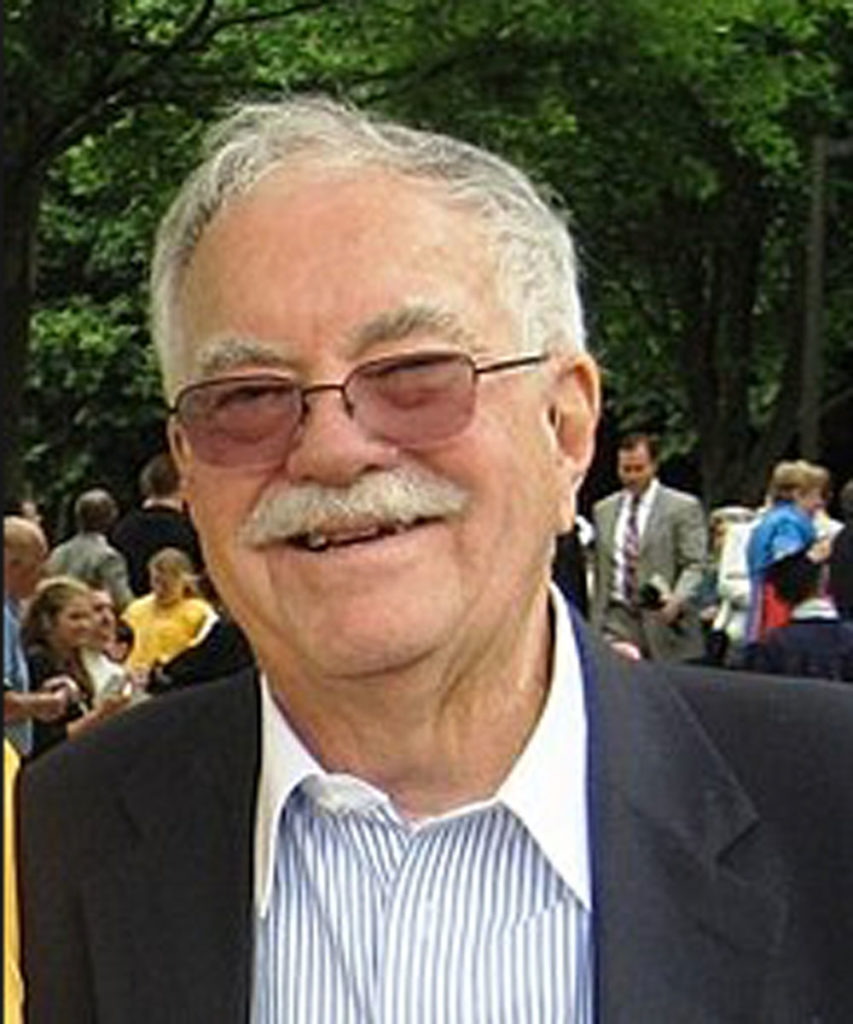 Jerry Parr left the Secret Service and entered the ministry. 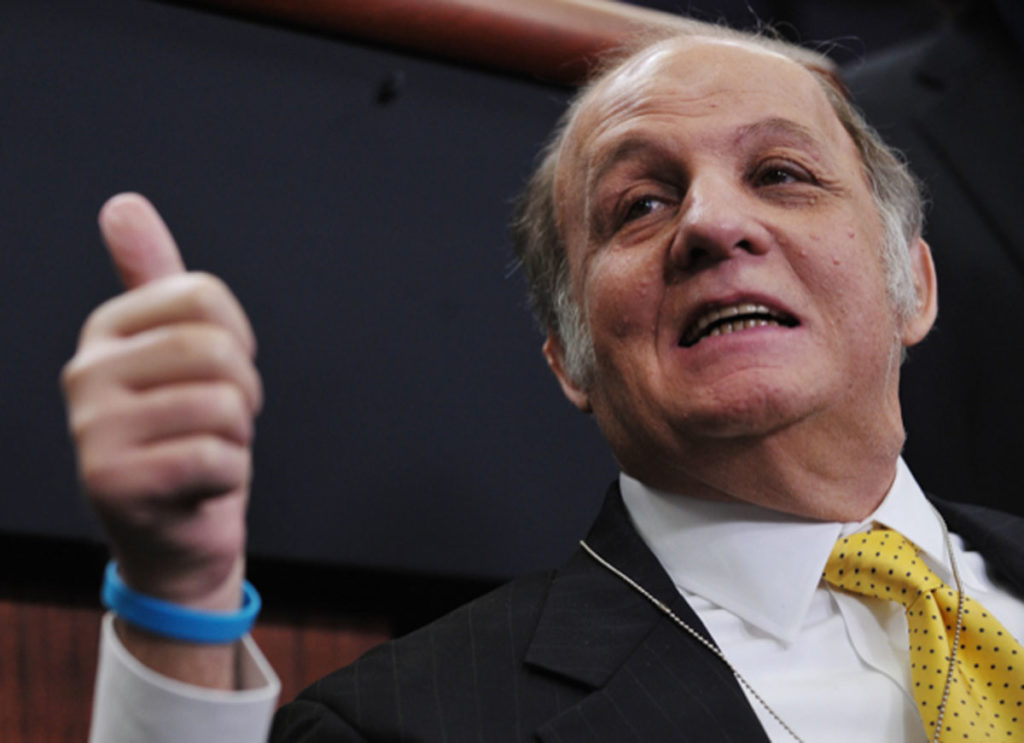 James Brady was left partially paralyzed by his wound and subsequently died more than three decades later from complications.

James Brady was the most grievously wounded of the lot, being permanently disabled as the result of his head wound. He and his wife Sarah subsequently devoted their lives to gun control. Their lobbying organization Handgun Control, Inc. morphed into the Brady Center to Prevent Gun Violence. The eponymous 1993 Brady Bill that mandates background checks for gun purchases was the result of their efforts.

Brady died in August of 2014, some 33 years after the shooting. As he did ultimately expire as the result of complications from his injury, the medical examiner declared his death a homicide. However, for a variety of arcane legal reasons, Hinckley was never charged with his murder. 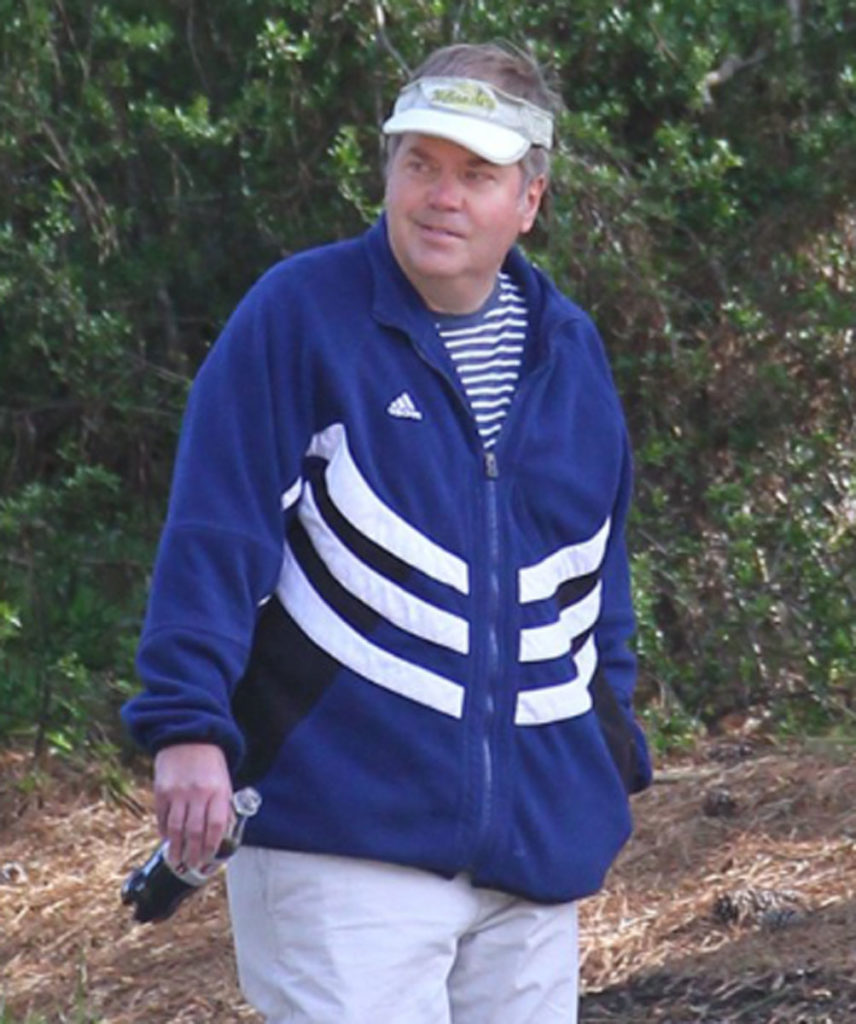 John Hinckley is now free to live in the community. His Internet usage and whereabouts are monitored. He is prohibited from doing Internet searches about himself, the attempted Reagan assassination, pornography, or Jodie Foster.

John Hinckley was found not guilty by reason of insanity and spent the next 34 years in a mental institution. During that time he corresponded with serial killer Ted Bundy and expressed no regrets. He declared that the shooting was, “The greatest love offering of all time.” In September of 2016, Hinckley was allowed to leave the mental hospital and take up supervised residence with his 90-year-old mother. Two years later he was granted permission by the courts to move out on his own. 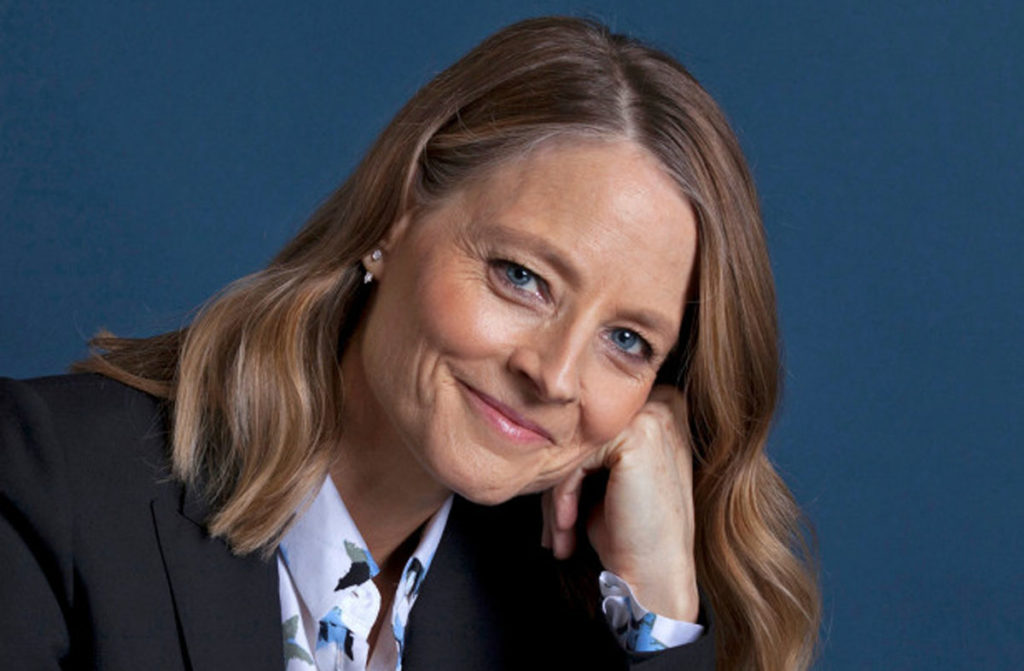 Jodie Foster has publically acknowledged Hinckley only three times since the shooting. She has otherwise canceled or walked out of every interview wherein the subject of John Hinckley was broached. 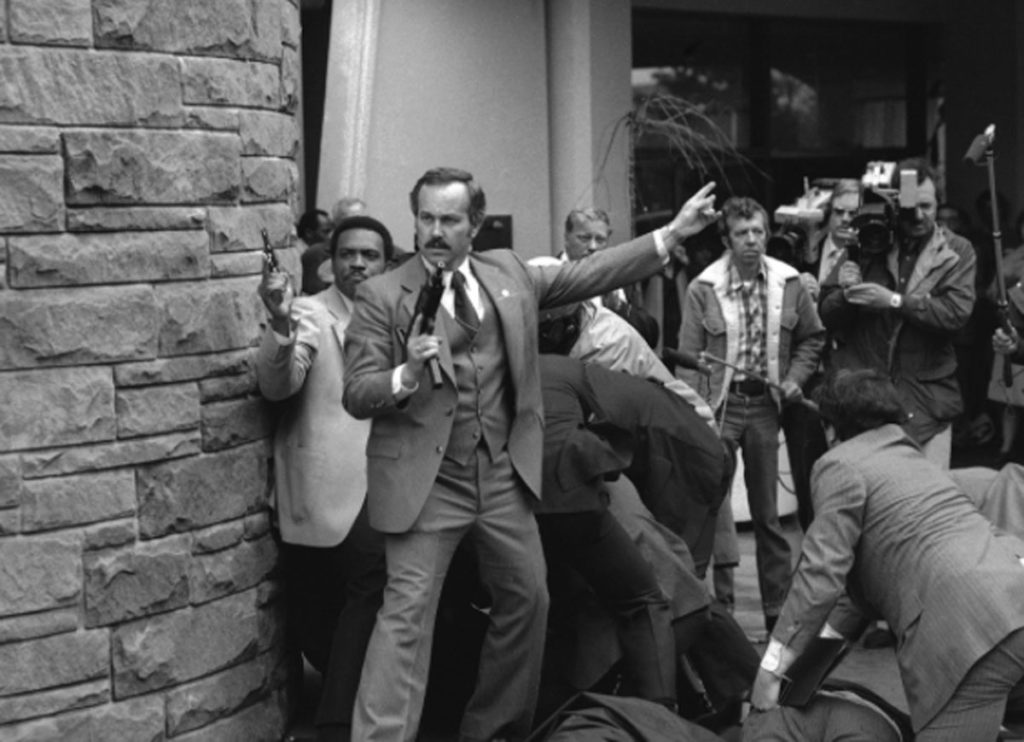 Secret Service Agent Robert Wanko brandished an Uzi submachine gun during the assassination attempt on President Ronald Reagan. These images subsequently became iconic. Note that the bolt is not retracted and Wanko’s finger is appropriately outside the trigger guard. 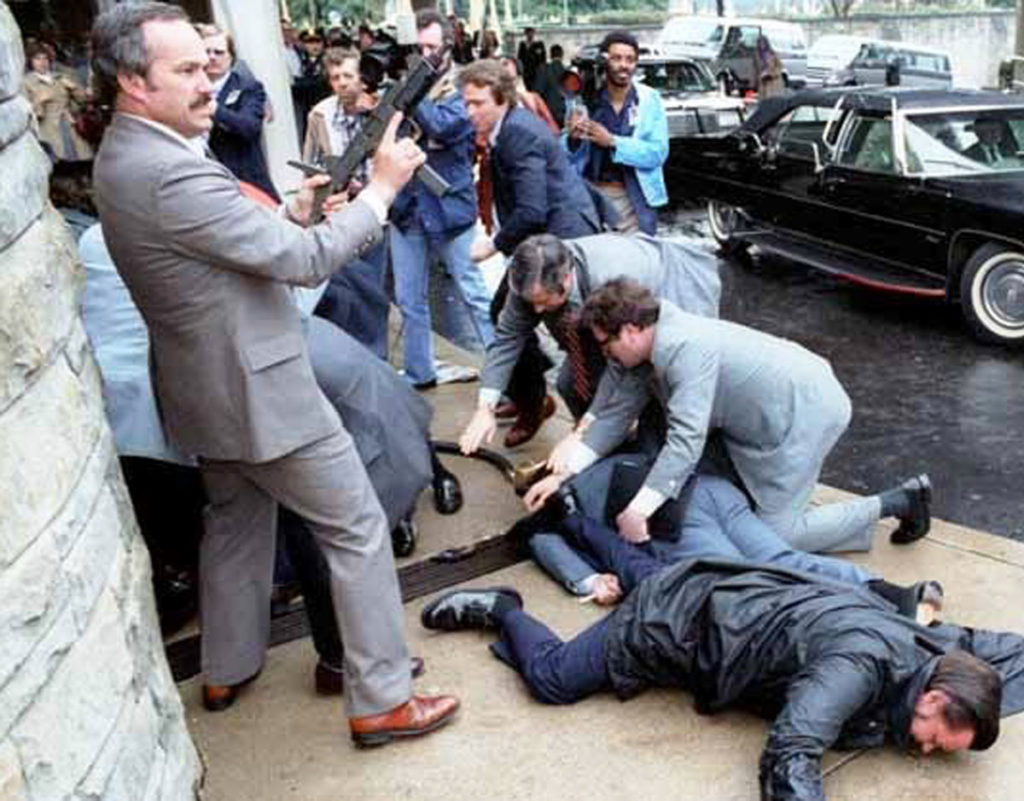 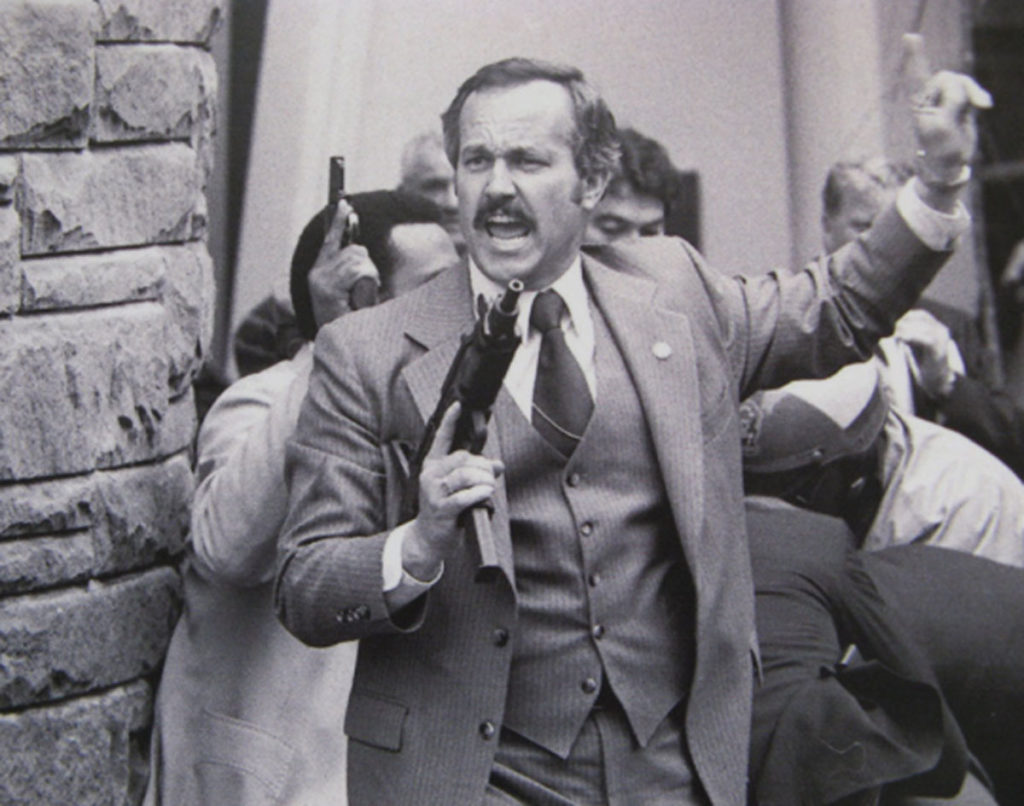