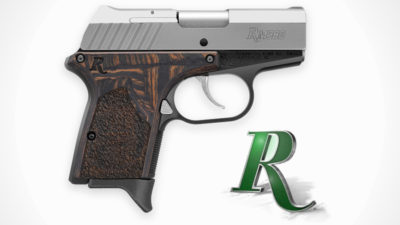 Even with it’s classy looks the Executive is priced to move. (Photo: Remington)

Remington is introducing the newest RM380, the Executive. The Executive, like all other RM380 pistols, is an ultra-compact carry solution made for deep concealment.

The Executive is a two-tone model with a matte black frame and stainless slide and barrel. It features machined laminate macassar grips that give them a classic hardwood look with improved durability.

The Executive is true to the RM380 pattern, chambered for .380 ACP with a 6+1-round capacity. It is a single-stack double-action pistol with a hard-anodized 7075 aluminum frame and 410 stainless-steel slide and barrel.

The RM380 is based on the Rohrbaugh 380 with a handful of updates including a different frame contour for less felt recoil. While .380 is a soft cartridge, the RM380 is also light at just 12 ounces, and the enlarged beavertail helps prevent slide bite without making a huge change to the gun’s outline.

The trigger guard is also deeply undercut and the frontstrap is finely checkered to ensure the best grip on this pocket pistol. The magazines can be fit with flush floorplates or with finger extensions to suit different grip techniques. The trigger is set at 10 pounds which is shootable but safe enough to carry in a pocket holster.

Other improvements include a slide stop that holds the slide open on an empty magazine and ambidextrous magazine release buttons. These are useful for both left- and right-handed shooters as they enable shooters to use their fingers to drop magazines instead of their thumbs with these very small handguns.

Overall the Executive measures in at a little over 5 inches long with a 2.75-inch barrel. The low-profile sights are machined into the slide to reduce snagging on the draw. That said Remington promises accuracy with the Executive which has a match-grade barrel which should help in training and, if needed, for shooting at longer distances.

For anyone looking for a two-tone pistol without the laminate grips they are of course replaceable. Each Executive RM380 comes with two 6-round magazines. The MSRP is in the middle of the pack at $405, which is less than the original RM380.

And real-world prices for RM380s are often steeply discounted compared to the suggested price. Right now on GunsAmerica RM380s are listing for as little as $250, with used models selling for even less.

These ultralight carry guns may take a little more practice to use effectively but the trade-off is clear: they can be carried on the body regardless of any attire preference or dress code, every day, everywhere. And with pricing starting under $300, buyers can afford a holster and extra ammo to get started.

Next post: Ruger Precision Rifle Gets a Big Block: Hands-on the RPR 338 Lapua