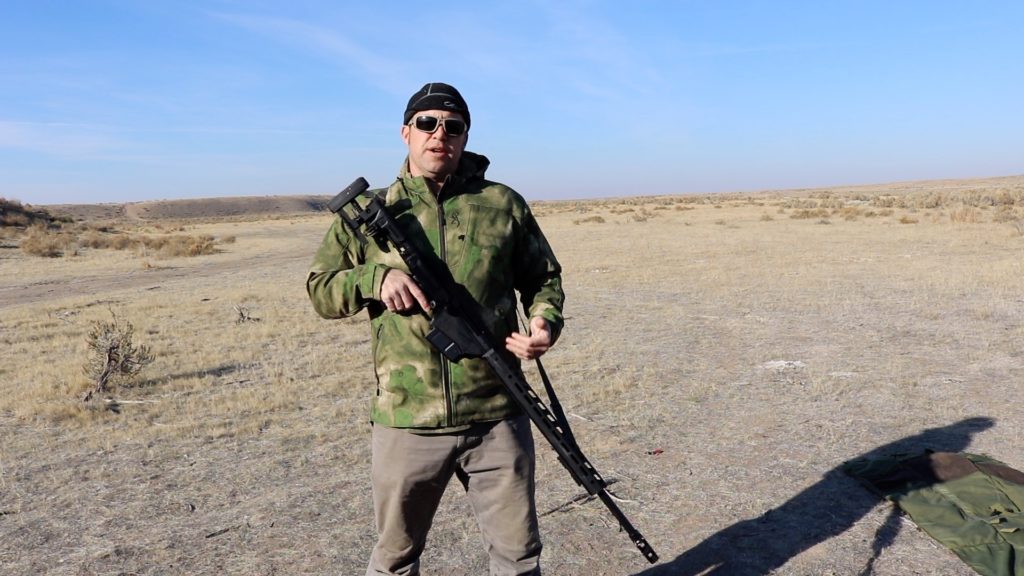 The author with new RPR Compact

Of all the weapons that have made an impact over the last five years, at least among civilians, the Ruger Precision Rifle has arguably done the most. That is a bold statement, but you would be hard pressed to find a rifle that has carried more water. If nothing else, look at the competitors it has spawned: Ruger led the charge into affordable chassis, now followed by Remington, Tikka, Savage, and a dozen others. The Ruger Precision Rifle, or RPR, you could say has taken the precision market by Sturm.

It wasn’t that long ago that what we would term precision rifles had an entry price of around $4,000, and it went up steeply the second you asked for leather seats. If you wanted to compete playing long range, you needed either a trust fund or a sponsorship from Uncle Sugar, which might include a steep price tag if you weren’t in the AMU. Ruger took a look at the problem and decided to flip the tables.

You can almost see the conversation happening, and I would argue this is right after the entire design team for previous projects was purged.

Engineer 1: “What if, we made a rifle that would compete with the best in class?”

Engineer 2: “I guess we will be done by lunch, what else you got?”

Executive/Bean Counter: “It needs to have a folding stock and feed from a commonly available magazine. I don’t know what those things mean, but focus groups say people want them.”

Engineer 1: “Hold my beer. Yo, Beancounter. Side bet: we get this done, loser scrubs the toilets in the others’ department for a year.”

And they did. The RPR was an instant hit, available in short action for 308, 6.5 Creedmoor, and 6mm Creedmoor. It can hang at a PRS match and is fantastic as a tactical rifle. Several people I know have turned the RPR into a one gun, all-purpose hunting and competition hybrid. The rifle has proven very accurate, durable, and popular. 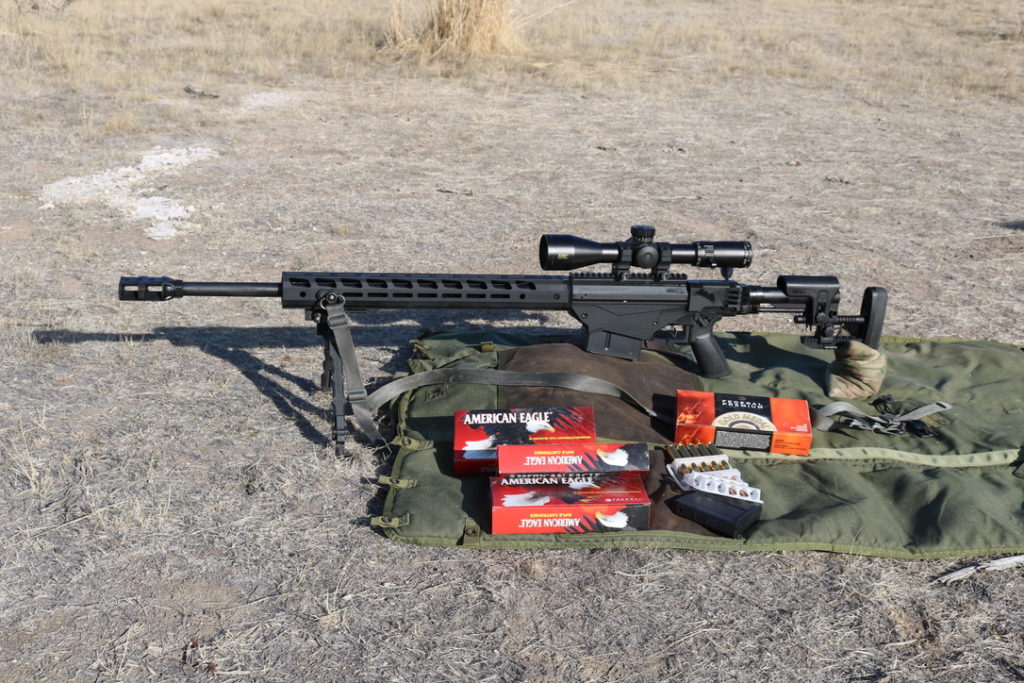 Getting ready to warm some barrels up.

It should come as no surprise then, that after Ruger took everyone’s lunch money in short actions, they would look further afield. And today, that dream is a reality for those holding out for a magnum. I think we all saw a 300 Win Mag coming. The surprise move was jumping in at 338 Lapua to boot. And that is what showed up at my FFL last week. 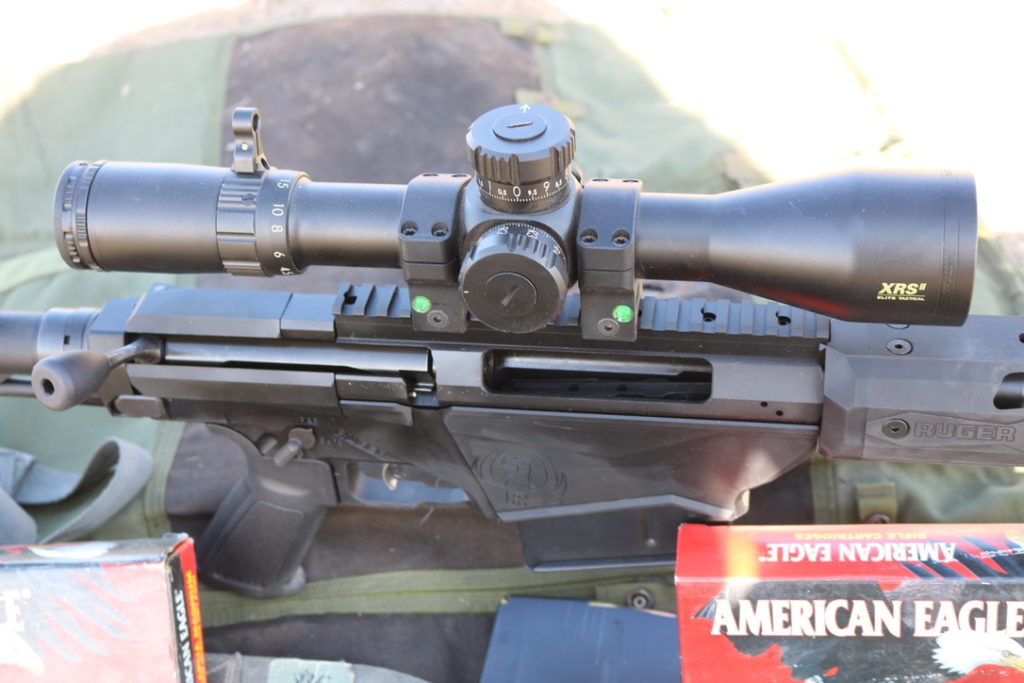 I actually thought my editor was kidding when he said 338. Going from Creedmoor to super magnum is a crazy step. I also had no idea what to expect, as I had only been told “Ruger, 338 Lapua.” When the box opened and I was staring at an overgrown RPR, I didn’t actually quite know what to think.

And the 338 is exactly that. It looks like someone stuck a normal sized gun in a machine and stretched its dimensions 30%. The absolutely monstrous muzzle brake is the only give away…and a noticeable increase in weight when you pick it up to record the serial number. 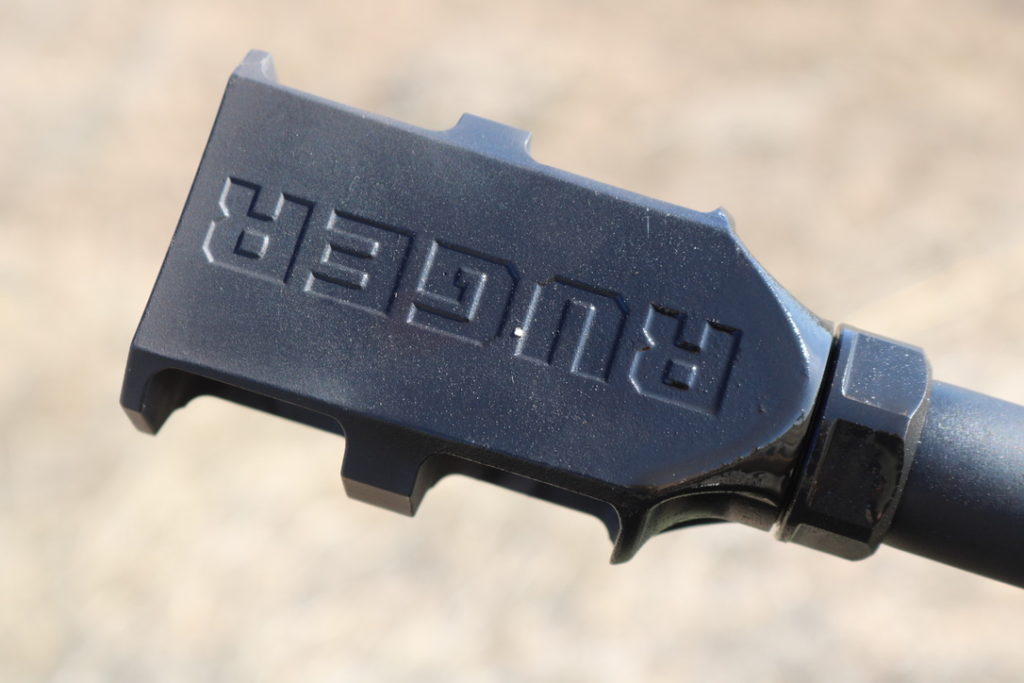 So, a quick rundown of the features that stay the same as the short action RPR is in order, then we can get to the changes for the caliber. The trigger is the same—called the Ruger Marksman. It is an excellent trigger, user-adjustable from 5 pounds to 2.25. No disassembly is required, an included Allen key slips through hole in the action to do the job. The Allen key is actually stashed in the bolt shroud, which is pretty cool. The trigger has a center blade, which I did not find at all a problem in use. 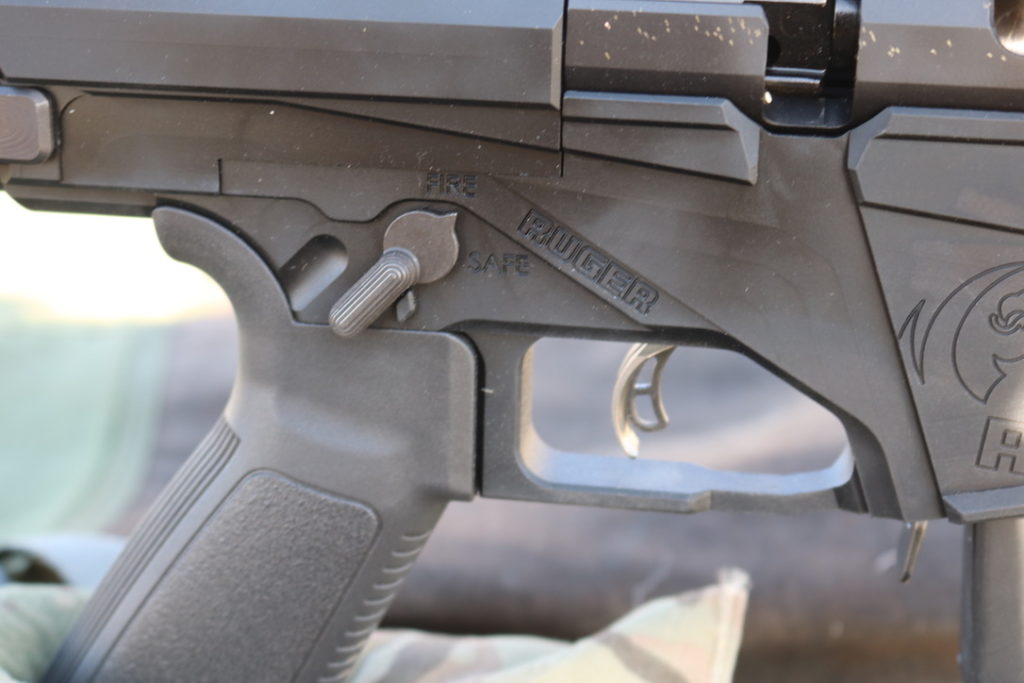 The folding buttstock is the same as the RPR, and a definite bonus at this price level, for either size of gun. While said buttstock will not win any beauty contests, it is extremely functional, and I can find no reason to dislike it. Considering all the whiz-bang stuff it does, you would be lucky to replicate it on a rifle costing twice as much. Length of pull and comb height are adjustable without tools, and some minor Allen key work also lets you adjust the cant of the butt pad. The bottom of the buttstock has a length of Picatinny rail for accessories and a QD sling cup. If you don’t like it, it can be replaced with an AR-style stock. Good luck finding a better solution. 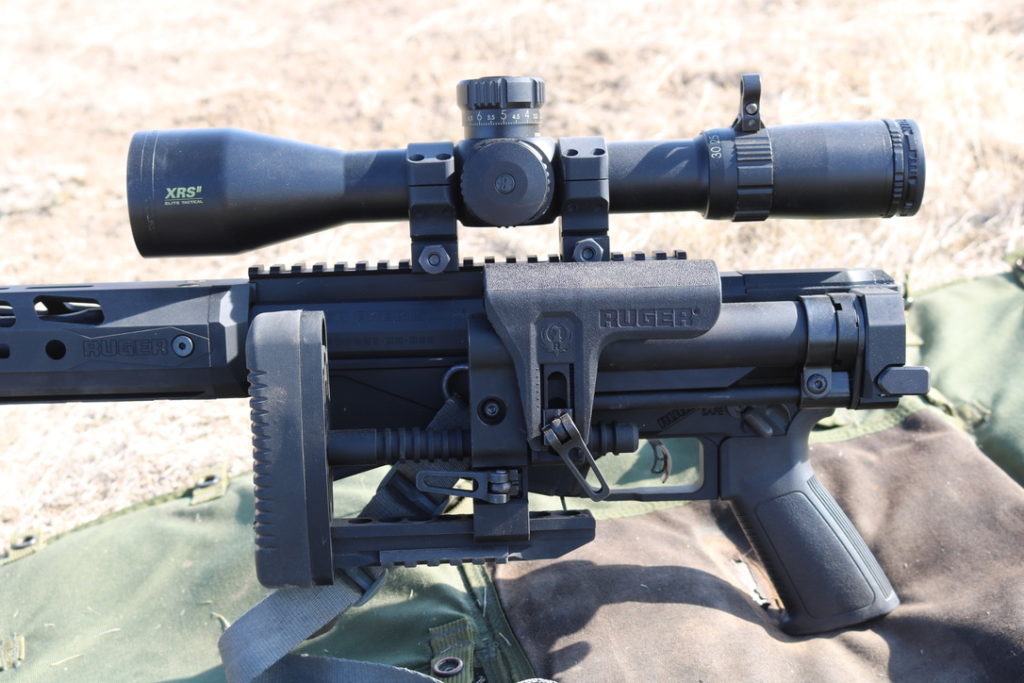 Maybe not a beauty, but the stock is a war horse. 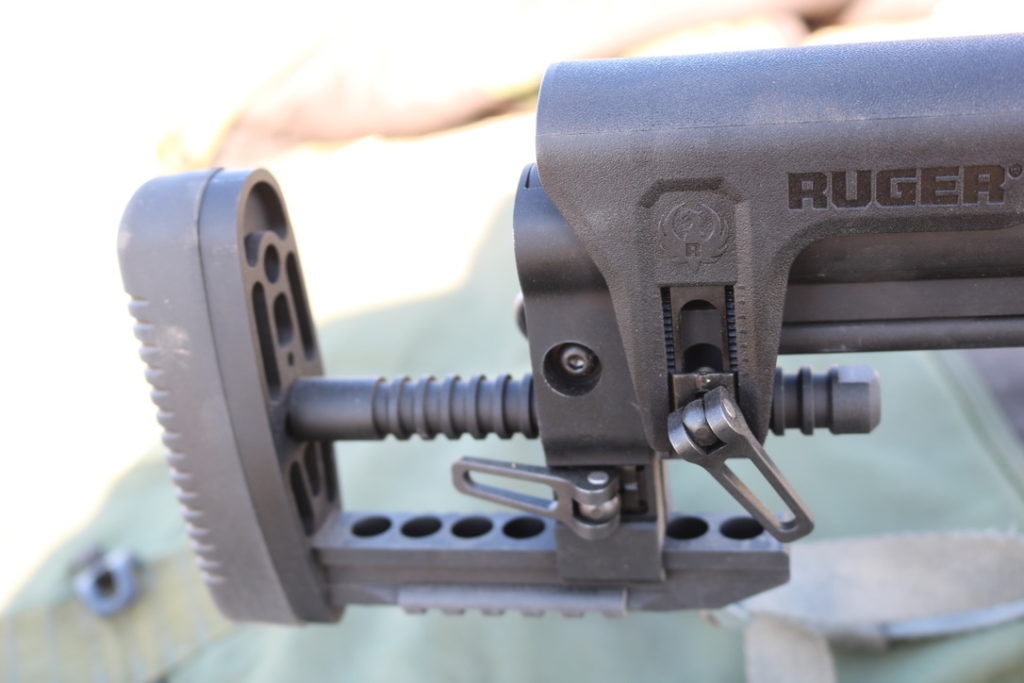 The bolt is a 3 lug design, with a 70-degree throw. It runs remarkably smooth, which actually kind of surprised me. At this price, I expect some grit. I have seen smoother, but you would have to have them side by side to notice. Without getting too far into performance, something else needs to be addressed. I have shot a lot of cheap 338 and 50 caliber rifles and they have a common problem. (Don’t get your panties in a bunch, I’m not calling the RPR cheap. But it is inexpensive.) Most of them, after you fire, take some muscle to unlock. Not being an action design expert, I assume that is due to the insane pressure put on the bolt when you fire. The RPR exhibited none of that. Running the bolt with hot Lapua brass in the chamber was just as easy as running it for dry fire. I was actually shocked by that, and it also means you can run this gun FAST. Maybe not a good idea at the ammo price, but you can. 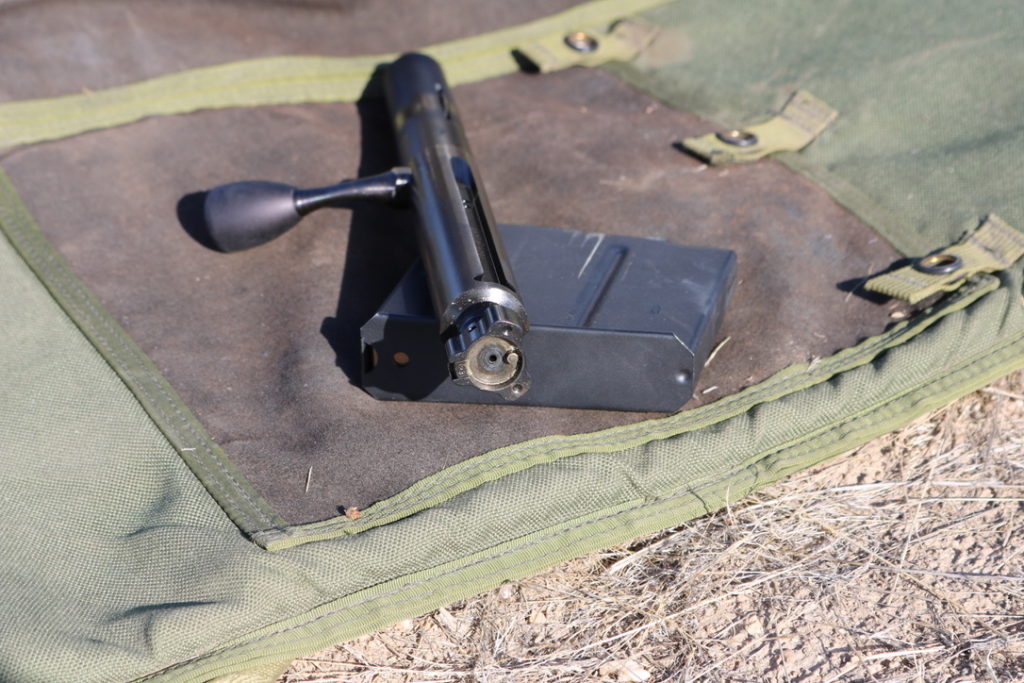 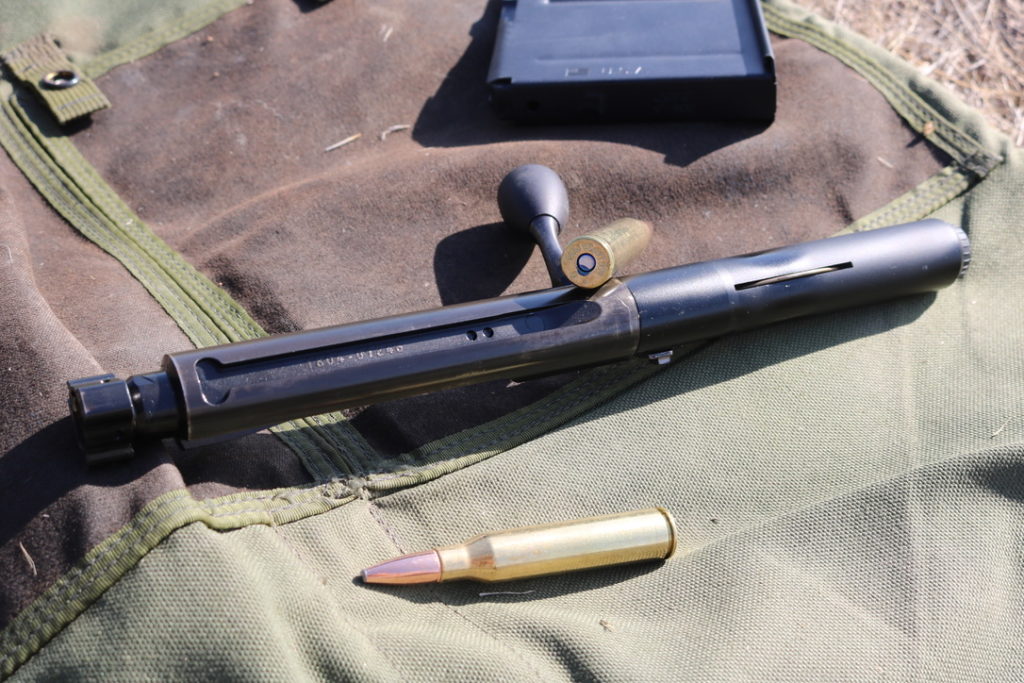 The handguard for the magnums is also different. To start, it is 18 inches long instead of 15 inches long. Not only does this make the rifle look less like it has high waters on, it offers some real benefits. First, it makes a longer pivot point for a bipod. Second, it changes the center of gravity for the rifle, on that same bipod. Basically, that means it is easier to track a target, in my opinion, and easier to load the bipod for shooting. Several 338 rifles I’ve toyed with saved money by having a very short fore end, and I’m not a fan. Using the RPR, I felt it was perfectly balanced in handguard length and barrel length. 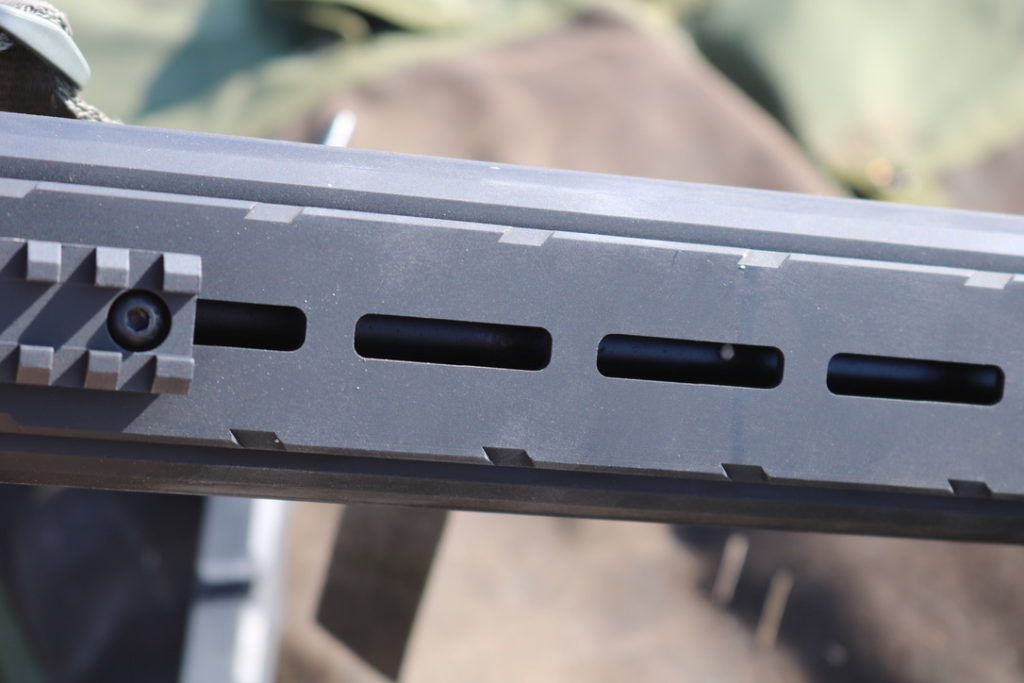 Flat base on the handguard

The magnums also feature a target style flat base to the handguard, a minor departure from the short actions. If you are ever unfortunate enough to need to shoot your 338 from an improvised supported position, this will make a lot of sense. Not only is that flat base going to offer improved stability, but it is also going to offer increased friction due to a larger surface area in contact. Under recoil, that is your friend. 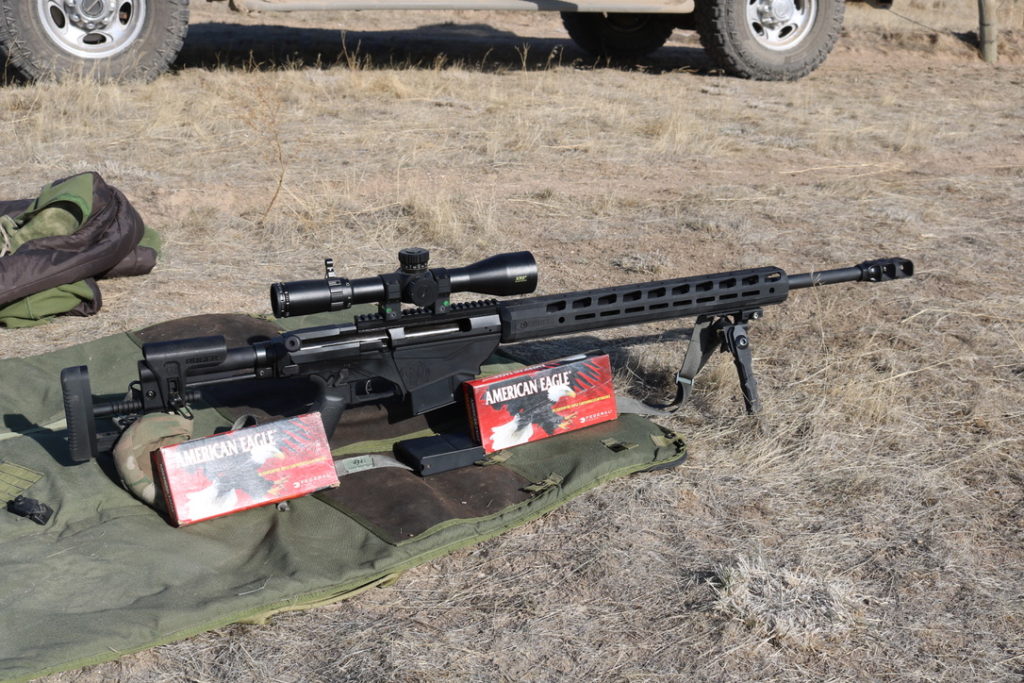 The barrel length is different for the magnums, which I think we all kind of expected. The short actions feature either 20 or 24-inch barrels, while the new 300 and 338 feature 26 inches. One thing I am not sure of, sitting here in my basement, is how much thicker the 338 barrel is. I don’t actually own an RPR (yet); I’ve always shot my friends’ short actions. The RPR has never had exactly a light profile, but I would call it medium. Even accounting for the larger caliber, the 338 barrel is monstrous. It actually reminds me of an M2 50 caliber barrel. They were not messing around on this one, and for caliber, I can’t fault the choice. Despite the barrel weight, the gun does balance well. 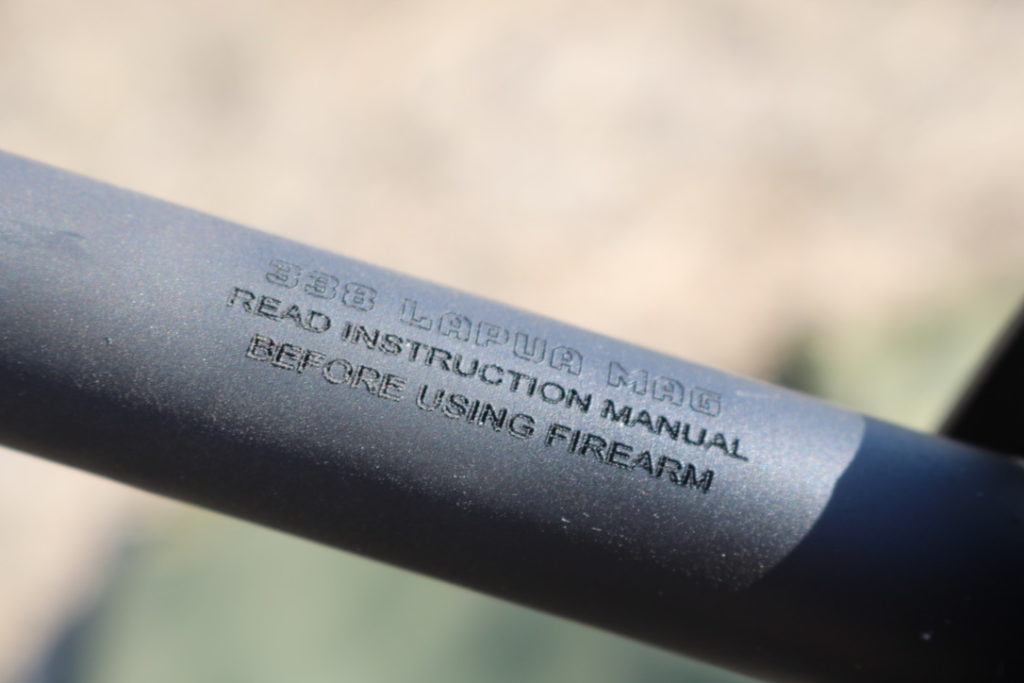 Thick profile on the barrel

The weight has increased as well for the new models, up from 9.8-10.8 pounds in the short action ( caliber dependent) to 15.2 pounds for the 338. That sounds like a lot, but once again, under recoil, you won’t be mad about it. Despite the heft, I maintain this gun balances extremely well, and that counts. 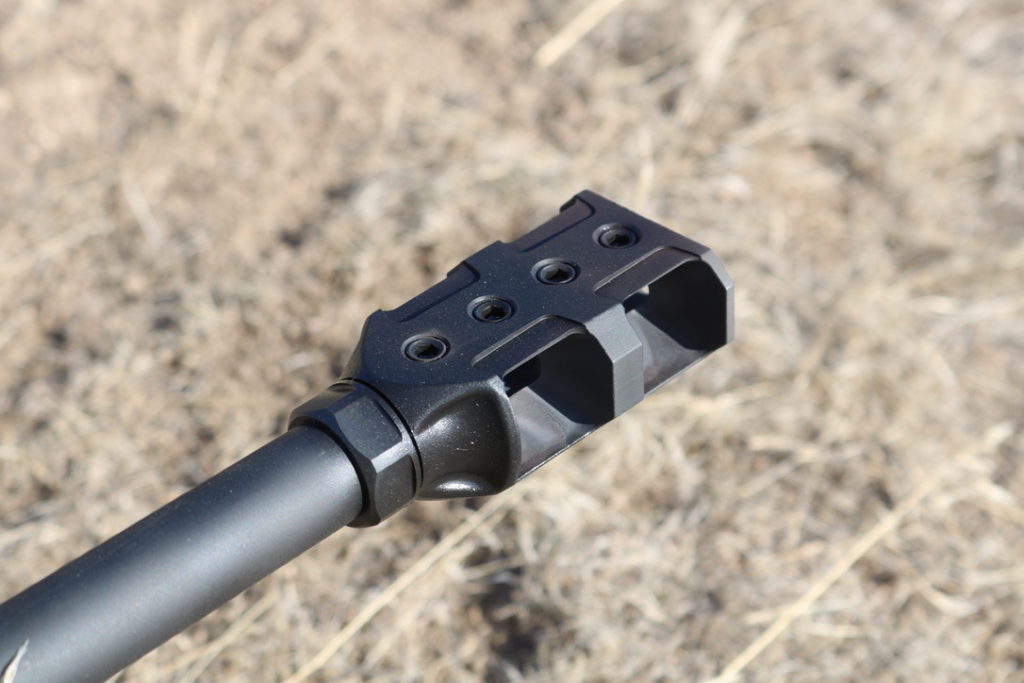 The last two changes are obvious the moment you look at them. First, is the gigantic muzzle brake. You can see if from outer space, and at first I was prepared not to like it. Then I shot a couple of rounds, and I was really glad I had it. Second is the magazine. The short actions run off double stack SR-25 magazines, which obviously doesn’t work for magnum calibers. So doing the consumer a solid, the new 338 runs off of AI-style magazines, and two are included. 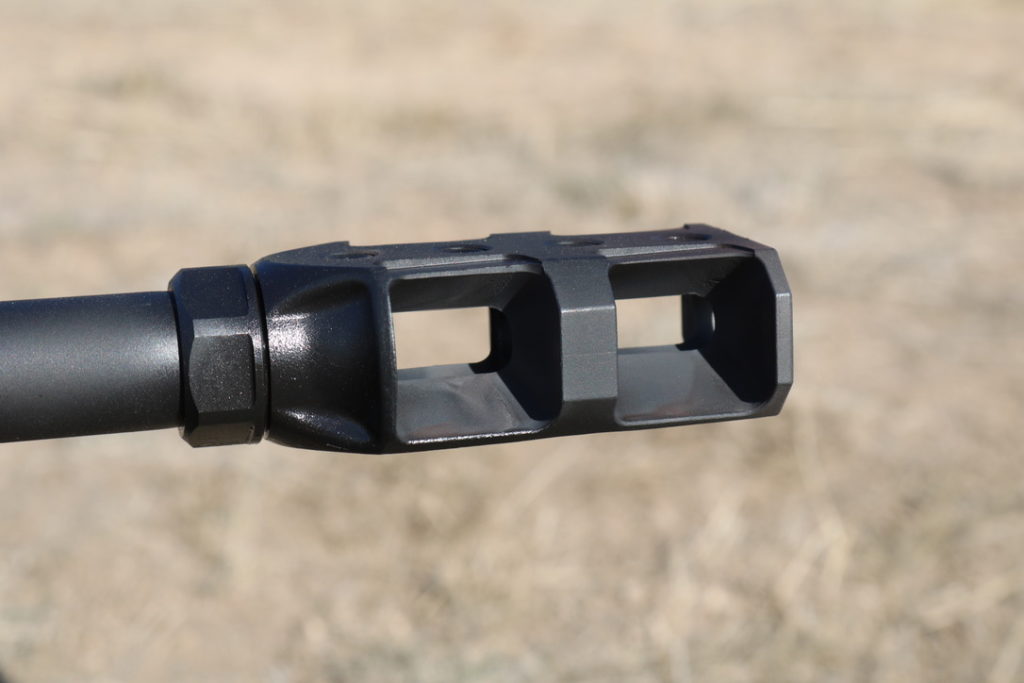 Performance wise, I was blown away by this rifle. First of all, it doesn’t beat you up to shoot it. I have about 200 rounds through my test model this week, which I know means I have a terrible job. But I am none the worse for wear, with nary a bruise to be found. That is actually very abnormal for 338 or 300 Win Mag. Not only does the brake work, but the aforementioned ugly buttstock is actually amazing in use. 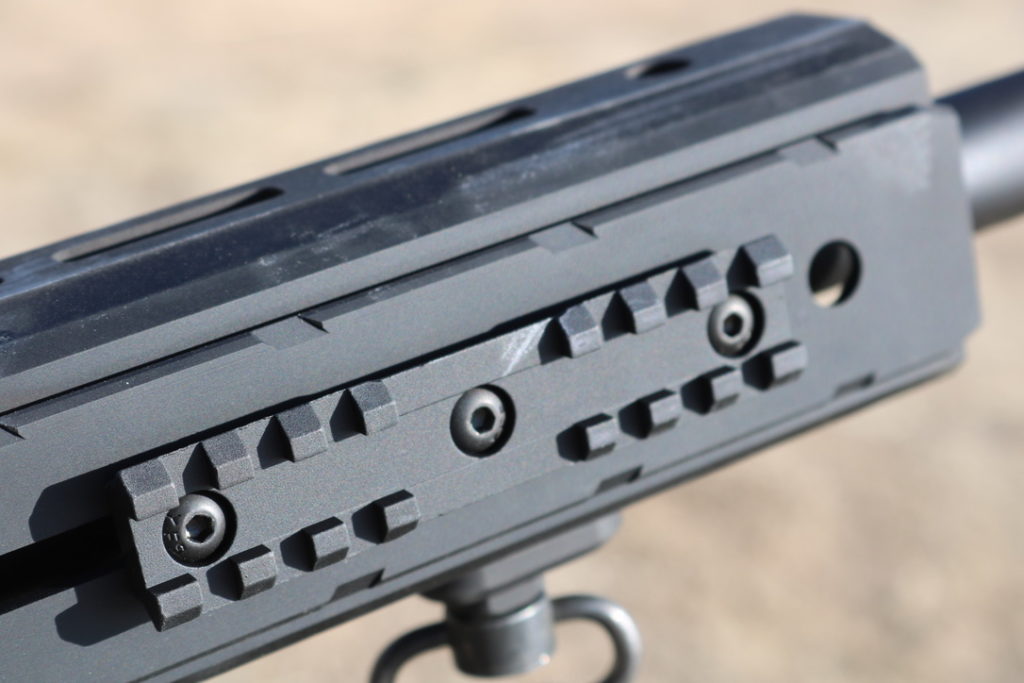 I was extremely limited on ammo, which in this caliber is hard to come by for anyone. At $5 to $8 dollars per round, they don’t exactly pass out match grade like candy, doesn’t matter what you’ve done for them lately. So I started the week with 20 rounds of Gold Medal Match, 6 rounds of Hornady ELD match, and a metric ton of American Eagle soft point. 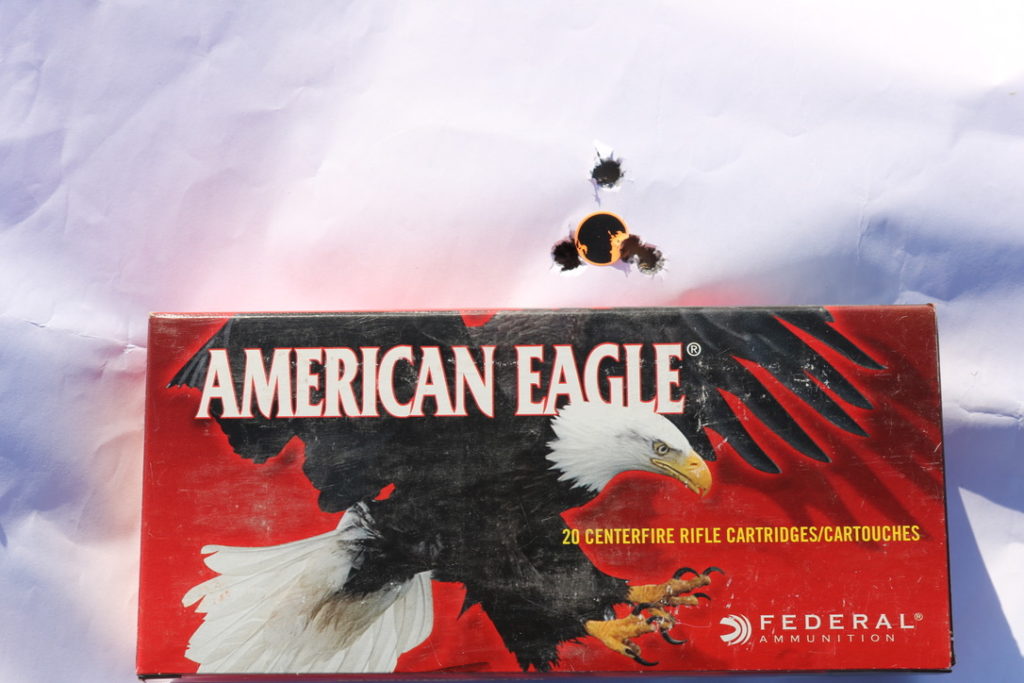 Being fair to Ruger, I grouped all three. And this gun hated the 300 grain Gold Medal. No hit on Federal— sometimes guns just don’t agree with a load. The AE 250 grains did better, averaging .75 MOA. That is respectable, but still not up to the reputation of the RPR name. Deciding to use my only 6 ELD rounds on paper, I split them into two, three round groups. Both of which were under ½ inches, more in line with what the gun is capable of. 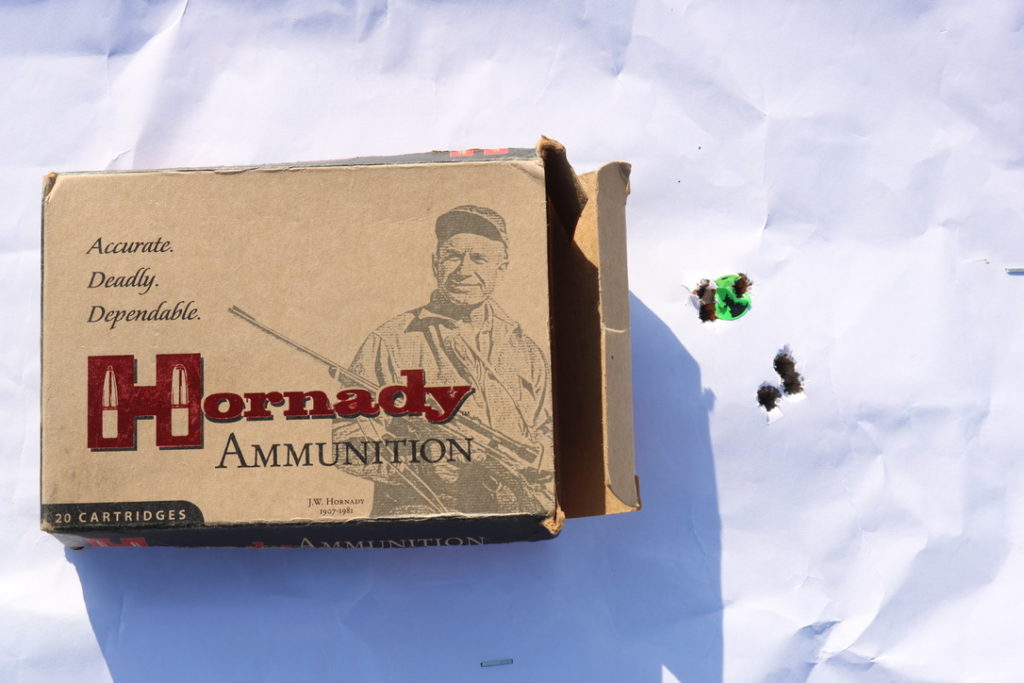 Now low on match grade or not, I’m not just shooting paper at 100 and calling it good. Definitely not my style. So I opted to take the AE soft points out to 1200, just to see. This isn’t really fair to the bullet or the rifle, but hear me out.

The AE soft point costs a third of what match grade does, for starters. And soft points are more like a hunting bullet than a “let’s shoot over the horizon” type of bullet. The AE 6.5 Creedmoor open tip is near match grade, but this was a different animal completely.

At 1200 meters, 338 Lapua should be a chip shot. As it stood, I had a little trouble getting on target. Weight and velocity aside, that was just too far for a soft point to fly well. The RPR did amazingly putting lead on steel, but it wasn’t exactly a group you put up on your trophy wall.

But I did learn a lot, and my respect for the RPR in 338 is high. If it will shoot ½ MOA at 100, there is no reason to think it won’t at any range a match bullet will fly. Or that you can call the wind at. Despite the uber-manly caliber, the gun was fun to shoot. The muzzle brake and weight do a great job of taming recoil, I would calculate this one at similar to birdshot in a pump shotgun. Which is saying a lot. For a 338 Lapua caliber rifle, I can’t think of a single better option below $5,000. If you have been waiting to step into the big boy rounds, this is a golden opportunity. 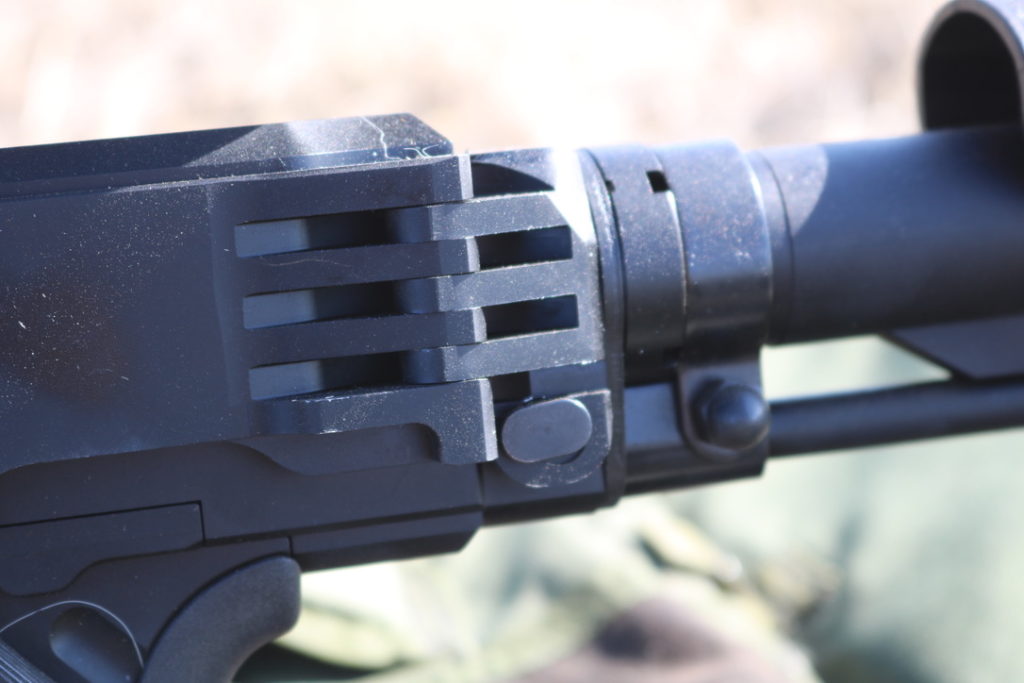 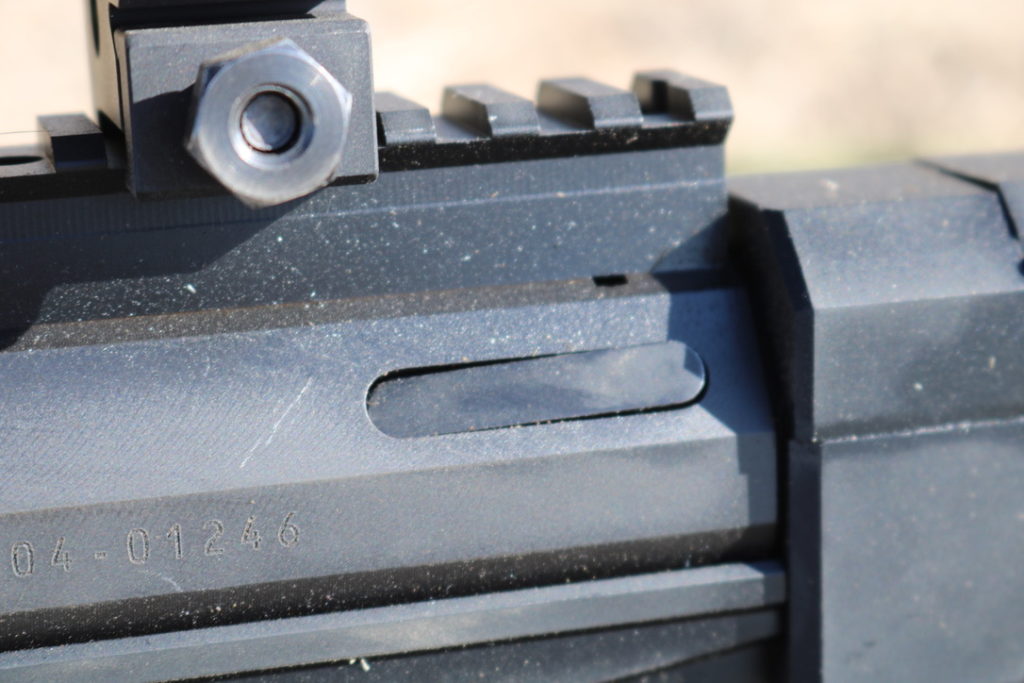 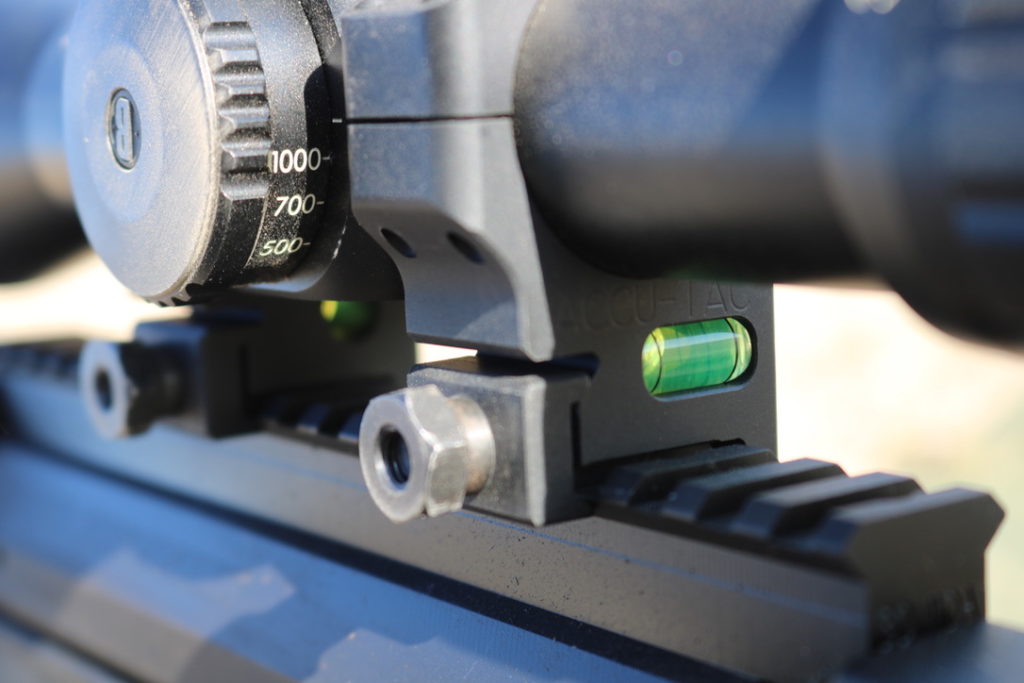 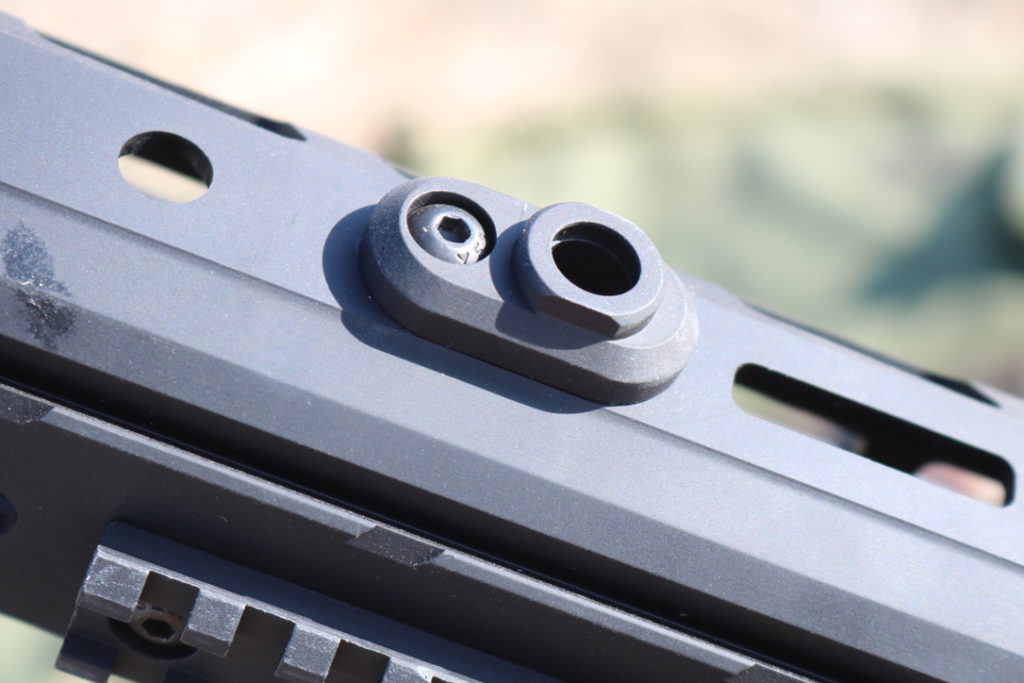 Visit Ruger to learn more about the Ruger Precision Rifle by clicking HERE.

***Shop GunsAmerica for your next Ruger Precision Rifle***