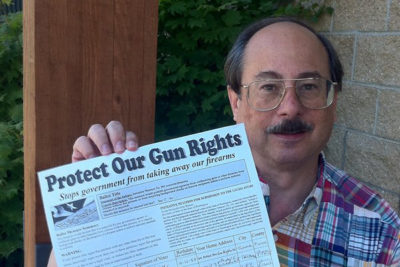 The Supreme Court of the United States has refused to hear any major gun-related cases since the Heller and McDonald rulings nearly a decade ago. Now that the court’s makeup has shifted, the Citizens Committee for the Right to Keep and Bear Arms (CCRKBA) is petitioning SCOTUS to rule on what they say is an outdated ban on interstate handgun sales.

They filed the petition for a writ of certiorari on behalf of two Washington, D.C., residents — Tracey and Andrew Hanson — who were denied the ability to purchase a handgun from a licensed dealer in Texas. The District allows residents to purchase a handgun out of state (provided the purchase is certified by police), but federal law barred them from transporting the firearm to D.C.

“The ban on interstate handgun sales was adopted decades ago,” noted CCRKBA Chairman Alan Gottlieb, “prior to the advent of the National Instant Check System that is now in place. The Hansons have essentially been denied the ability to legally purchase a handgun from a licensed retailer because of this prohibition.”

The District of Columbia has no federally-licensed firearm retailers who maintain an inventory for sale to the public, according to the petition. If D.C. residents wish to purchase a handgun out of state, the federal interstate handgun transfer ban requires them to use the lone District-based FFL, who charges a $125 transfer fee.

The Hansons wanted to avoid the fee by purchasing handguns in Texas and, following both Texas and D.C. law, transport their new firearms into the District. But they knew that federal law prohibits such an action, so they filed suit in the United States District Court for the Northern District of Texas. They challenged the federal interstate handgun transfer ban on its face and as-applied to them on Second Amendment and Fifth Amendment equal protection grounds.

The case worked its way to the United States Court of Appeals for the Fifth Circuit, a panel of which reversed an earlier federal court decision that found the interstate handgun transfer ban facially unconstitutional. The Fifth Circuit declined to hear the case en banc, and the CCRKBA is now appealing to the highest court in the land.

Gottlieb is hoping this case will finally force the Supreme Court to compel the lower courts to enforce the Second Amendment as interpreted in the Heller decision.

“But our case goes to the heart of what appears to be a reluctance in the lower courts to enforce the Second Amendment even now, more than ten years after the landmark Heller ruling and eight years after the McDonald ruling,” he said. “This continuing problem is mentioned in our petition to the high court.”

“After all,” Gottlieb continued, “if a citizen is law-abiding in his home state, he or she is going to be law-abiding in a different state where they might find a firearm they want to buy, but the interstate sales ban prevents that. Citizens can purchase all sorts of other goods across state lines, but why not the one tool that is specifically mentioned and protected by the Constitution’s Second Amendment? That simply defies logic and common sense.”

Funding support for this lawsuit is provided by the Second Amendment Foundation, which is CCRKBA’s sister organization and specializes in education and litigation.