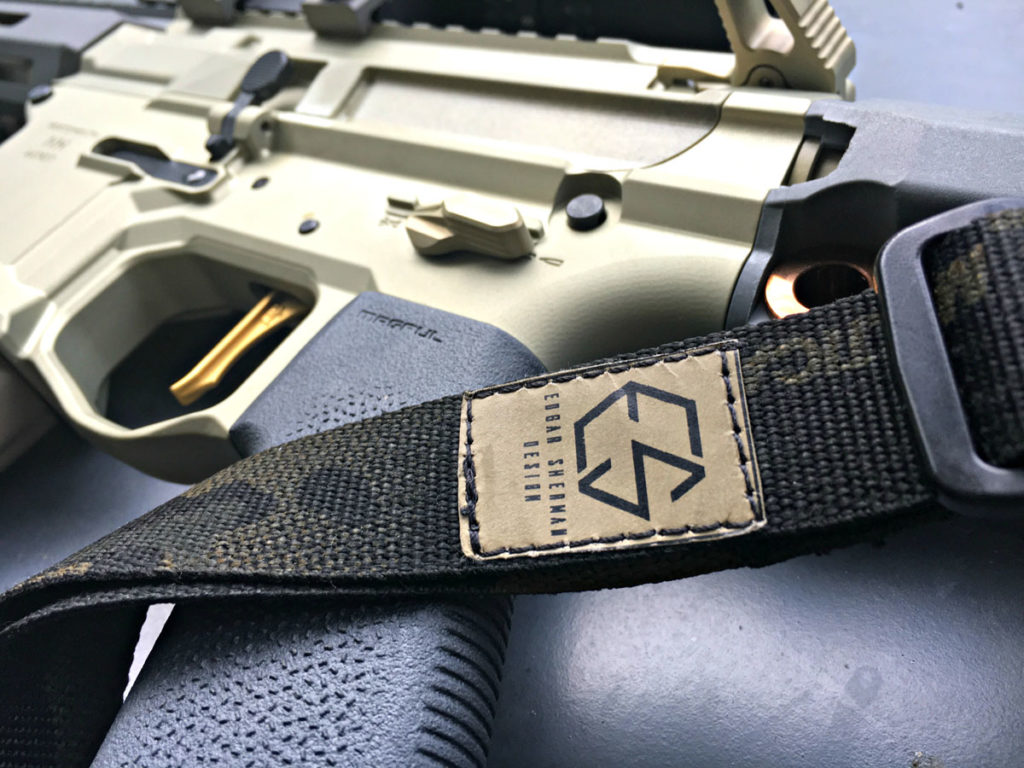 Slings, who has them?  Admittedly it took me a while before I realized the value in slings.  What do I mean by this?  Well, like most people, as a kid I started shooting cans and other stuff with a Ruger 10/22.  Often times pulling up to a box canyon out on a ranch and just having fun.  The rifle sat on the tailgate while we loaded magazines or set up cans.  And you know what, that little Ruger did great without a sling.

Fast forward to my time in the Marine Corps, in Afghanistan.  I couldn’t find a tailgate for the life of me to “hold” my rifle while I did other tasks.  So, enter the rifle sling.  Granted, at the end of 2001 I still had a 2 point parade sling on my M16-A2, or at least until I fashioned up a single point sling out of some tubular webbing, but big picture, slings free you up to do something other than holding your rifle. 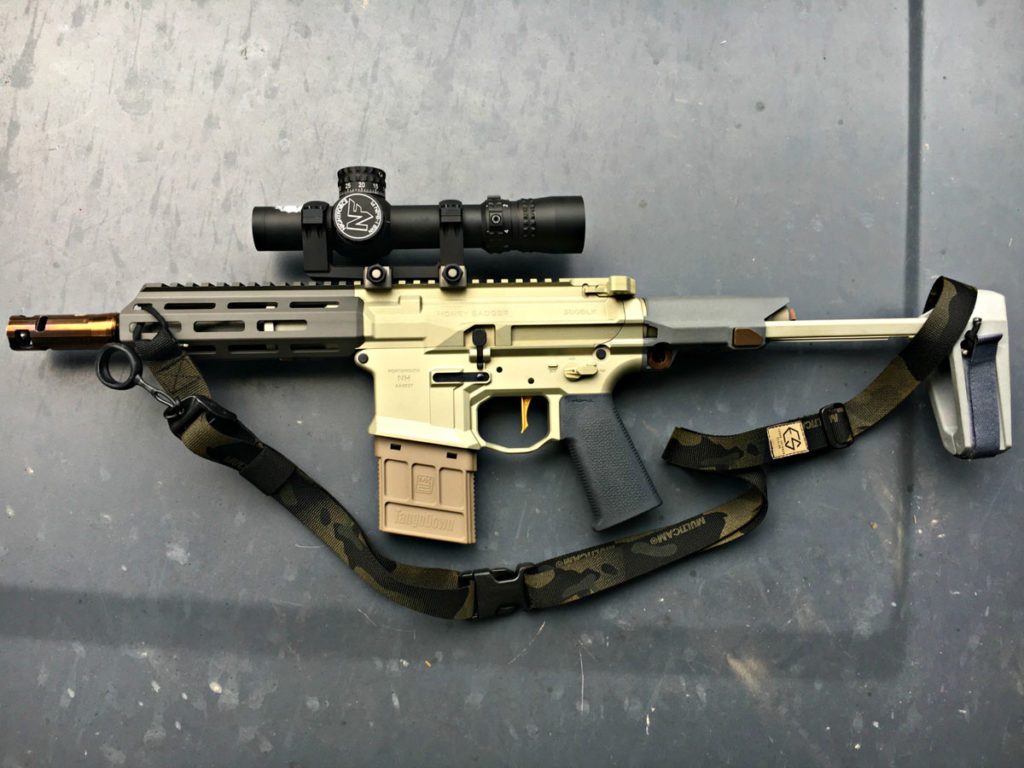 The Q Honey Badger pistol in 300 Blackout with a Nightforce NX8 1-8 and ESD Sling.

At this point all my rifles, to include the pictured pistol, have slings.  And on the off chance one doesn’t, it is probably because it is in the process of getting work done on it.  There is a massive value in slings.  From the tactical application of utilizing the sling to create a more stable shooting position, transitioning from primary (rifle) to secondary (pistol), freeing you up to go hands-on (Law Enforcement) or even just the mundane tasks of picking something up at the range, think clearing your rifle, retrieving the ejected round and loading it back into the magazine.  Or maybe you just need to go relieve yourself (stand-up kind) while out with your rifle.  The list goes on and on.

So what do I look for in a sling?  For my applications I want a good 2 point sling, that is lightweight, relatively comfortable and easy to manipulate.

Let’s break these down, starting with a 2 point sling.  While there are merits for a single point, I don’t often have need for one.  Whereas a (well designed) 2 point sling can not only be used to comfortably carry a weapon system but also to build good supported shooting positions and secure the weapon to you, should you need to do something active that requires both hands (Think carrying or climbing). 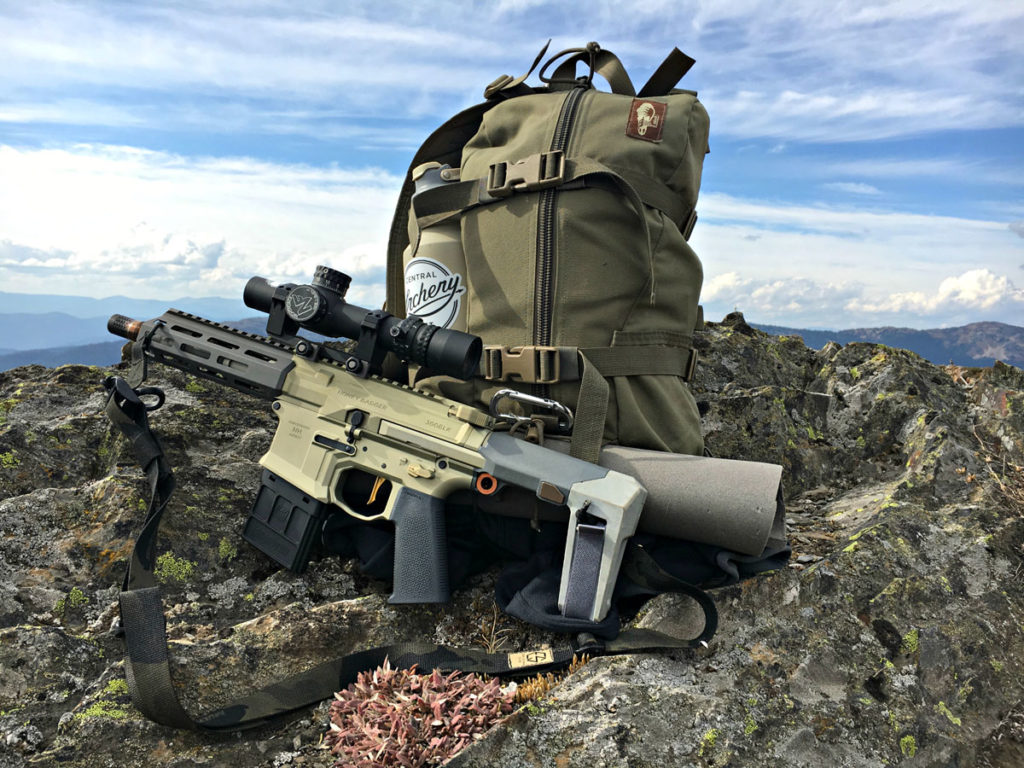 When you spend hours with a rifle slung, comfort becomes important really fast.

We’ll look at the criteria of lightweight and “relatively” comfortable in the same pass.  At the end of the day, you are carrying something with a strap across your shoulder weighing somewhere between 5-10 or maybe even 15lbs.  There is only so much comfort that can be afforded you.  And while you can sing the merits of a big soft wide sling strap, there is a trade-off.  Thickly padded slings come with more and more added weight.  That weight ultimately adds up with everything else leading to discomfort and fatigue.  And depending on how you are carrying your weapon and what you are doing, they rarely lend you the freedom to employ your weapon as well as other more streamlined slings.

If you want to carry a gun for a long period of time and have it be as comfortable as possible, put it in a backpack with some sort of suspension system.  Conversely, if I want immediate access to my weapon, I find a lightweight 2 point fits the bill with respect to comfort and usefulness. 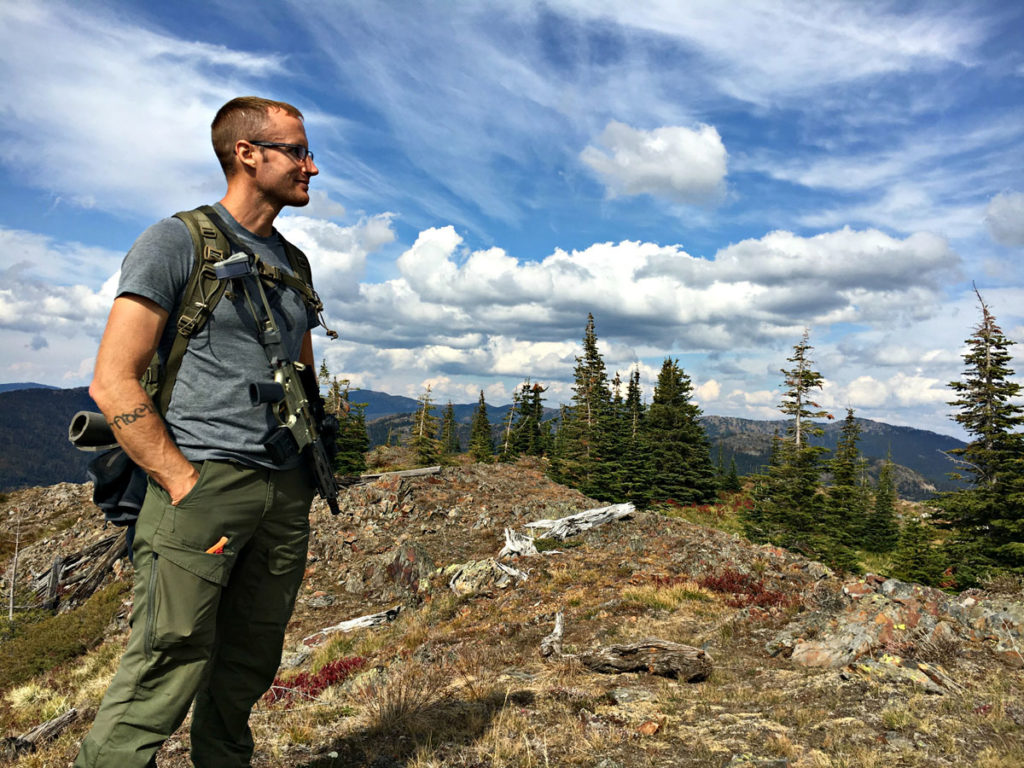 Over 8 miles of hiking and the ESD Sling treated me well. Never wearing or creating hot spots.

And last but not least, I want something easy to manipulate.  Looking back at my M16-A2 with the parade sling on it, it left a lot to be desired.  In fairness that sling was great on the drill field.  Or even on the range at 500 yards if you had the time and opportunity to undo it and make it into a loop sling.  Beyond that though, it was terrible.  It was terrible for just carrying your rifle over your shoulder even.  In order to get the most out of a sling, you want the ability to quickly manipulate it.  So you can rapidly lengthen your sling if you need to go from some sort of carry position or tight stable shooting position, into something that requires more mobility. 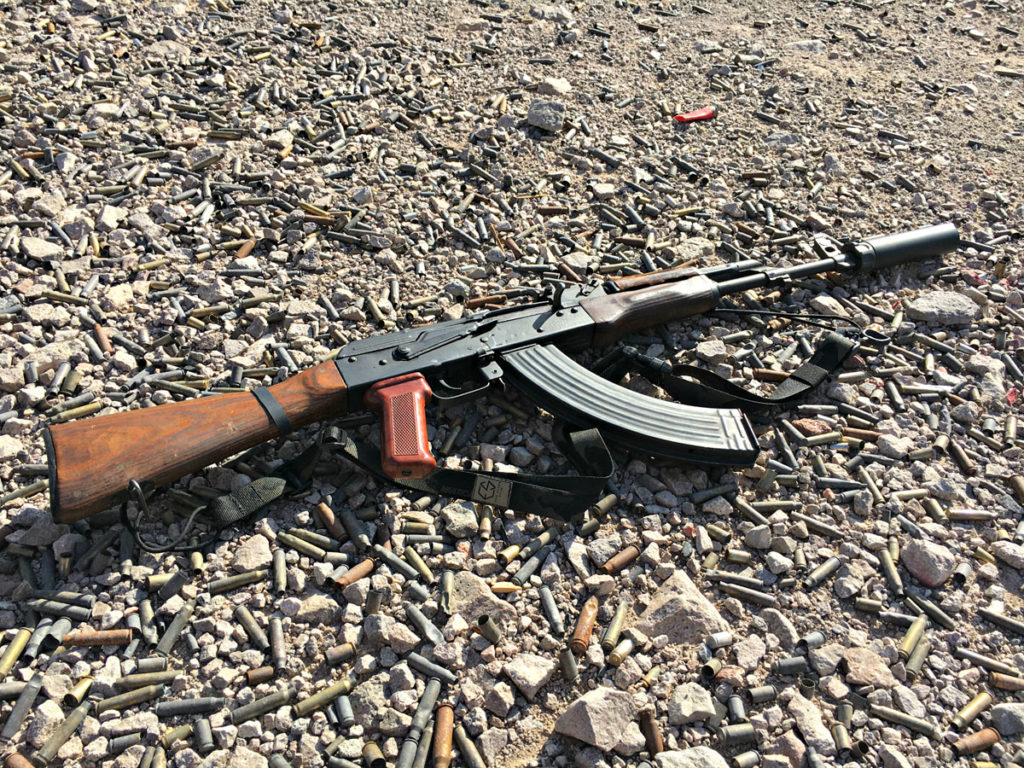 The ESD Sling is at home on any weapon.

Now that I’ve outlined these criteria, let’s see how the ESD Sling by Edgar Sherman Design measures up for me.

First off, it is a 2 point sling.  Winning so far.  Additionally, the sling most certainly checks the box for being lightweight.  It is made of 1” webbing and uses hardware made by ITW Nexus, which are not only proven, but also very light.  The sling uses both the ITW Triglides and a Zipline Orbit. 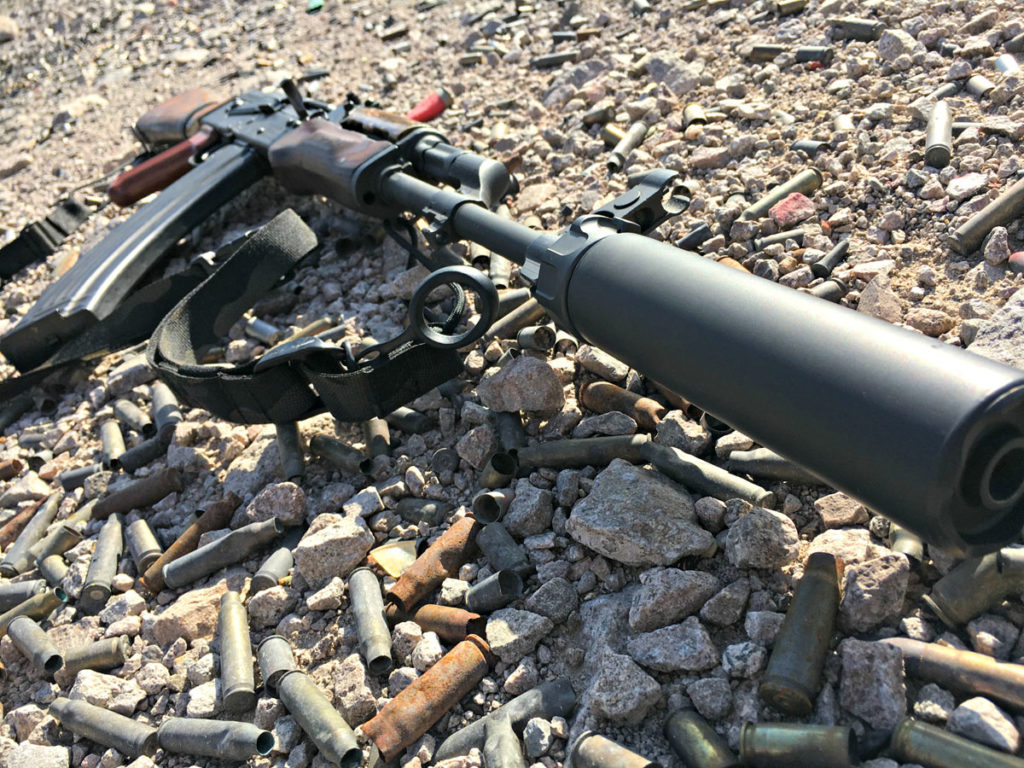 The Zipline Orbit creates an easy to reference and manipulate tab on the sling.

Part of the way the ESD Sling saves weight is in the attachment method(s).  You can order your sling a variety of ways to include sewn-in QDs, which is the heaviest, weighing 4.2oz.  While the sewn in QD slings are the heaviest of the lineup, they are still significantly lighter than other 2 point slings.  There is also a version offered with loose ends and extra Triglides.  This allows you to put any type of attachment method you want, to include attaching your sling directly to a traditional sling swivel.

But to the end of being light, and pragmatic, I really like the sewn ends.  They are sewn in such a way that you can use 550 cord, or any other material, to tie a loop between your weapon and the sling.  Then you just slide the knot back into the sewn end and you have an incredibly low profile, lightweight and quiet (no metal or squeaking) sling.  With the sewn ends, minus whatever lengths of paracord you use, the sling weighs 2.5oz. 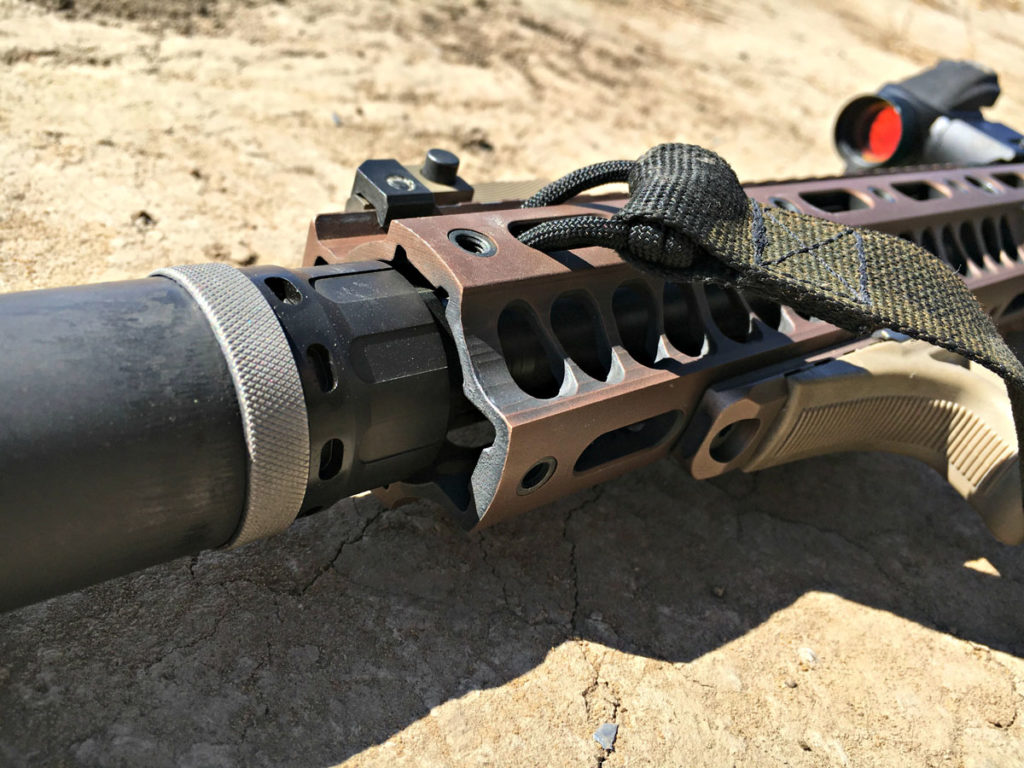 Attaching a sling by 550 cord cuts extra weight on the weapon by not requiring mounting hardware on the weapon system. Such as adding QD sockets to an M-LOK rail.

A quick note on using 550 cord.  While I have used slings that use 550 cord attachments in the past, they are plagued with the fact that the cordage is sewn in.  Eventually, it will wear, abrade or maybe just get wholesale cut accidentally.  So another advantage to using 550 cord with the ESD Sling is that you can easily replace the cord should it become worn.

Also, if you are afraid of not being able to get the sling/weapon off of you should it become catastrophically stuck, think maritime ops where your gun is trying to drown you, the sling is offered with a Fastex Buckle.  So if you don’t have QDs on your sling or can’t access them, you can simply release the buckle.

Next up, reasonable comfort.  Yes, the ESD Sling is actually really comfortable for me.  While I have used wider heavier slings, and they look great on paper, when it comes to application, I don’t really feel the benefit.  Now if you are going to go on a 12-hour patrol and you’re stuck with the M-249…  Ya, find a big thick padded sling, and be ready to be miserable no matter what.  But unless you’re lugging a 20+ pound weapon, the sling is comfortable. 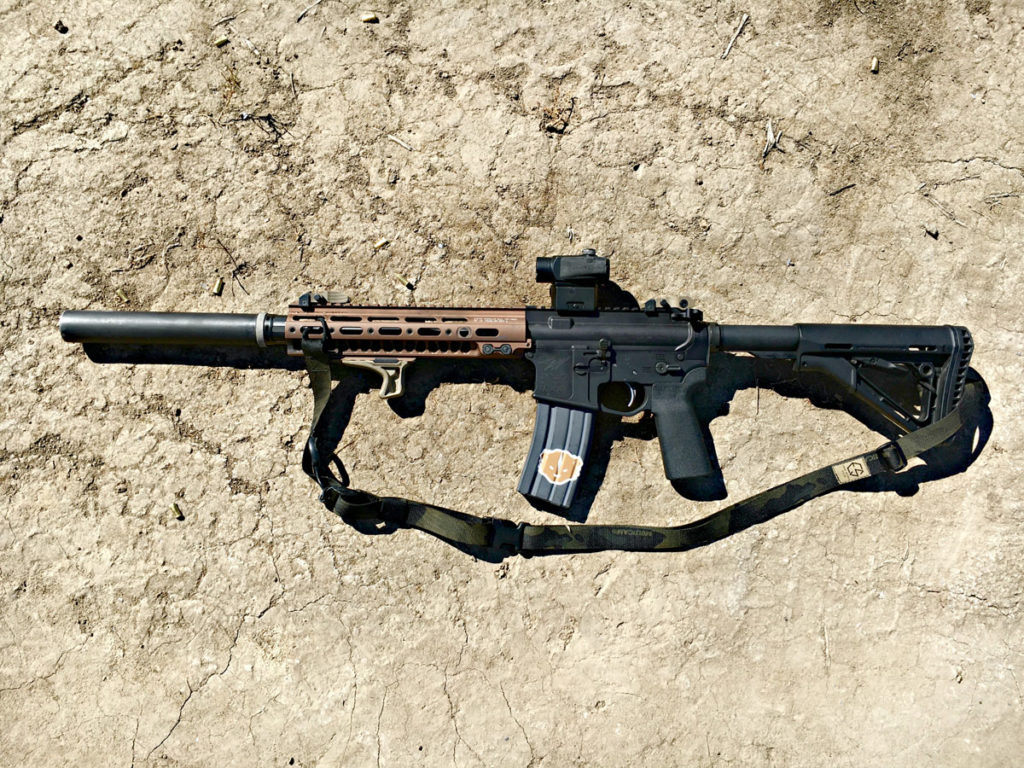 Using the 550 cord attachment method, I can easily attach the ESD Sling to an older Geissele MK1 rail without the added weight of QDs.

So now, what about the ability to manipulate it?  This is where the ESD Sling really shines in my experience.  I have used a lot of adjustable 2 point slings from a number of manufacturers over the years.  And I will say, the ESD Sling is the easiest sling to manipulate for me.

A lot of slings do a really good job in one direction.  What do I mean?  While most slings move fairly free in one direction, some adjustable slings use some sort of cam mechanism.  This requires you to defeat the mechanism in order for you to move the sling the opposite direction.  Either by pulling a separate tale or moving the tale of the sling in a specific direction in order to loosen the sling.  This sling does not require this.

By grabbing ahold of the Zipline Orbit, you simply move it in either direction to tighten or loosen the sling.  Almost no tension whatsoever is required to adjust the sling.  Meaning you don’t have to brace the gun/sling against your body in order to manipulate the sling.  It slides freely in both directions.

Another important bit here, the sling locks up as soon as you release the Zipline Orbit and load the sling.  This lets you adjust the length to whatever you need to to be at and then either push into a nice snug shooting position or just have your weapon secured so that you can do other tasks without your rifle banging around.

Additionally, there is no loose end, the sling is self-contained.  So you don’t have a yard sale of webbing hanging off of your sling when it is tightened up or drawn out.  It accomplishes this in the way the webbing is run through the sling. 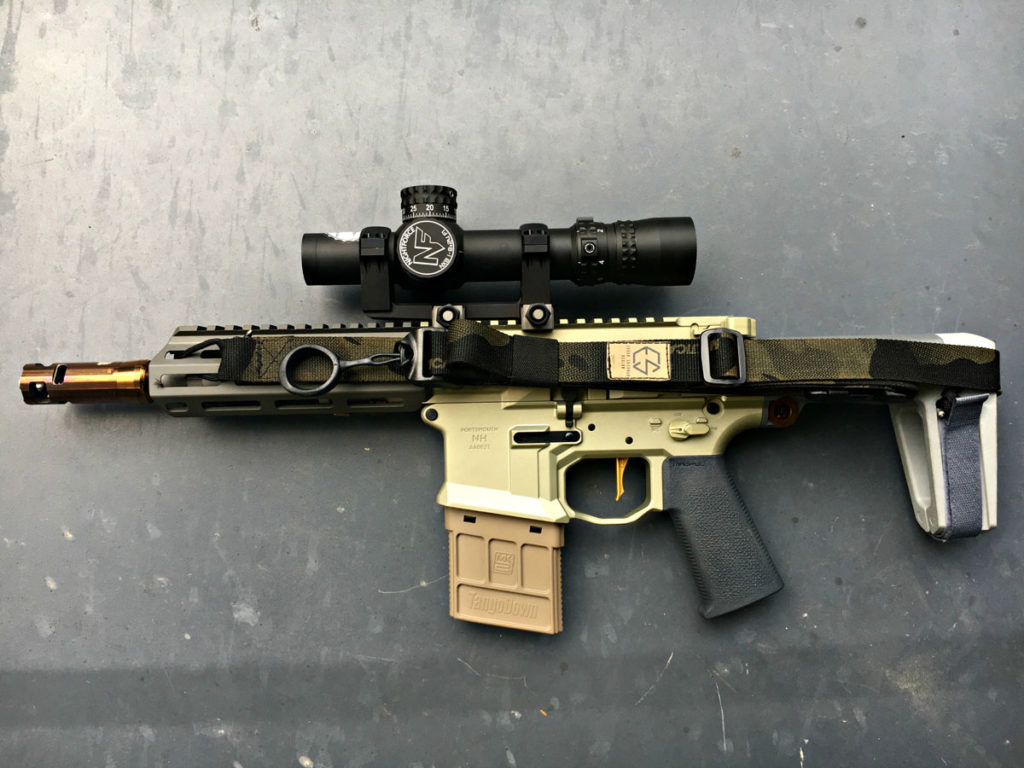 Here the Honey Badger is set up in a transport configuration with the pistol brace collapsed and the ESD Sling stowed in itself.

And speaking of running webbing, there is a bit of elastic sewn into the sling.  This performs numerous functions.  On the one hand, it keeps the sling running smoothly without extra material looping out.  It also serves to smooth out and correct the orientation of the webbing before it runs into the buckle should it get twisted.  And lastly, which is a great little gem of a feature, the elastic holds the sling for transport.  You can fold the sling back onto itself and stow it inside the elastic band.  This keeps the sling out of the way for you, such as when the rifle is in a case, gun safe or vehicle.  Then when you deploy the rifle, you just pull the sling towards you and it immediately becomes accessible for you to loop over a shoulder.

Overall I’m really impressed with the ESD Sling.  It does everything it needs to for me and nothing it doesn’t.  The bar has been raised in the world of slings.

You can go HERE if you would like to purchase an ESD Sling.

***Shop GunsAmerica for your next Rifle***