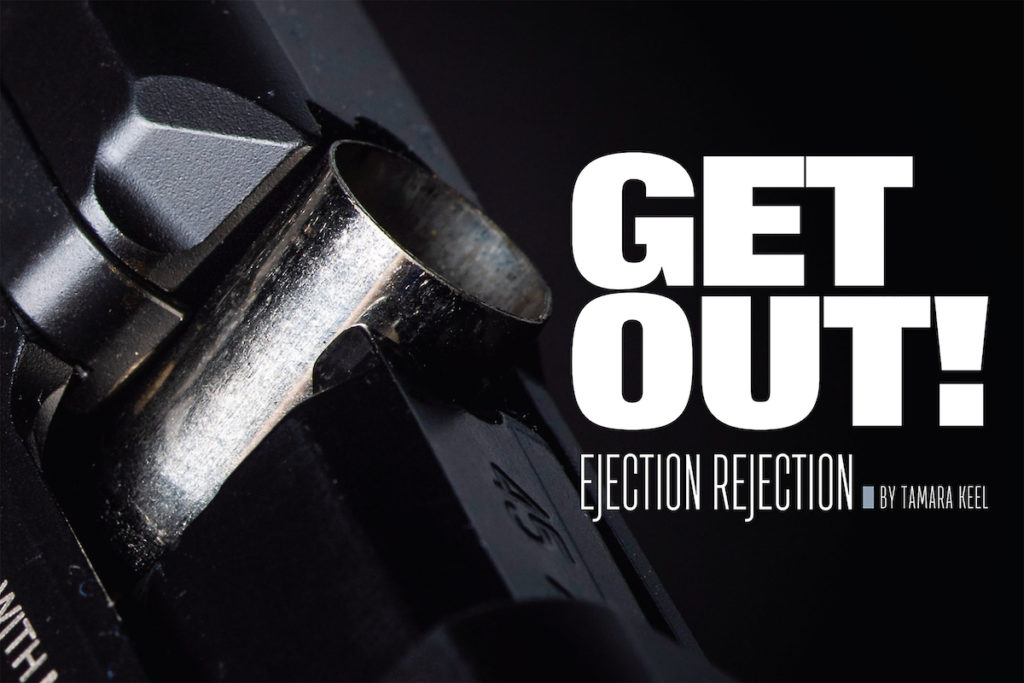 Editor’s Note: The following is a syndicated article by author Tamara Keel that first appeared in USCCA’s Concealed Carry Magazine Volume 15, Issue 6, October 2018 under the title, “Get Out: Rejection Rejection”

I used to quip that I’d like to be a coroner because, if I were, I’d just list the cause of death as “lack of oxygen to the brain” in each and every case.

This old joke returned to memory in a recent discussion about pistol reliability. We were discussing why a known good pistol was exhibiting issues in a training class when I remarked that, assuming the gun had no broken or out-of-spec parts, there was only one real cause of malfunctions: The spent case wasn’t striking the ejector with sufficient force to eject cleanly.

The rub is that there are multiple things that could cause that to occur.

The most common cause in my experience is weak-sauce range ammunition. Inexpensive 115-grain 9mm FMJ ammo isn’t loaded very heavily under the best of market conditions. During ammo panics, there seems to be a tendency at some manufacturers to lighten powder charges and pass the savings along to the customer.

I’ve chronographed separate lots of 115-grain that were barely supersonic on average, with the slowest rounds of a 10-round string struggling to top 1,050 feet per second. Subsonic 115-grain ammo doesn’t give much recoil impulse to work with in order to function the gun. Where this rears its ugly head the worst is when the feeble recoil of these rounds meets the recoil spring assembly of a gun like an HK, intended to stand up to the force of tens of thousands of duty loads. The owner of the previously super-reliable pistol is left wondering why it’s suddenly a jam-o-matic.

That rearward velocity of the slide relative to the comparatively stationary frame can be dissipated in other ways too. The pistol would obviously eject most positively if the frame were somehow held magically still, while at the other end of this spectrum is the malfunction most commonly referred to as the “limp-wrist,” in which the frame is allowed to move rearward enough under recoil that the spent case can’t get all the way out of the gun before the slide closes on it.

That same malfunction can be induced in other ways as well. For example, I’ve been in classes that involved shooting while pulling the gun back into a retention position. Pulling the gun toward you while shooting is functionally doing the same thing as limp-wristing: moving the ejector backward through space at the same time the slide is traveling rearward.

The most pedestrian reason for the spent case not hitting the extractor with sufficient force is the slide being slowed by friction. The source of the friction could be external, such as an errant thumb pressing against the side of the slide or the shooter’s body or clothing in the case of a poorly indexed retention position. It could also be internal friction.

While modern service pistol designs tend to be relatively indifferent to dirt and lack of lubrication, they’re not magic. It’s possible for enough dry dirt and crud buildup to provide drag on the slide travel sufficient to impact proper ejection. Older, metal-framed designs tend to have much larger bearing surfaces between the slide and frame rails, with concomitantly more sensitivity to dirt and lack of lubrication.

So you can see how, while the actual cause of the malfunction is the same, there are many overlapping roads that can lead to it. The typical real-world example of this is the shooter who turns up at a class like Extreme-Close-Quarters Combat with his regular carry gun — we’ll say a Glock 19 — that’s been a paragon of reliability for the last 6,000 rounds. Be that as it may, he’s suddenly clearing malfunction after malfunction. “I don’t get it,” he’ll say as he clears yet another failure-to-eject, “It’s been 100-percent reliable up until now. I even put a fresh recoil spring in it just last week.”

But he bought a case of inexpensive FMJ for the class, which has barely enough energy to run the gun under ideal circumstances, and now it’s trying to cycle the slide against a fresh recoil spring while the friction of the shooter’s thumb is pressing against it in hundreds of rounds of retention-position shooting. It’s a perfect storm for turning a previously reliable gun into a hot malfunctioning mess.

Use good ammo, keep the gun lubed to spec and don’t hold it wrong. Everything else should take care of itself.