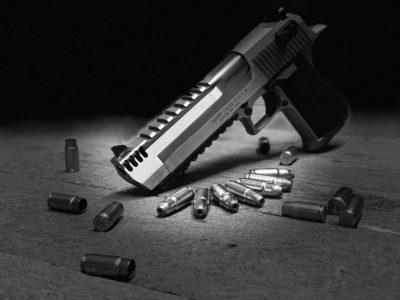 Magnum Research is rolling out a new cartridge for their Desert Eagle series of heavy-hitting handguns called 429 DE. The cartridge is based on 50 AE necked down for .44 Magnum projectiles.

The result is a cartridge that pushes bullets as much as 25 percent faster than .44 Magnum loads, producing up to 45 percent more energy at the muzzle. Because it’s a necked-down cartridge, it has less felt recoil than similarly-powered 50 AE loads.

Magnum Research will offer drop-in caliber conversion barrels in 429 DE for 50 AE Desert Eagle Mark XIX and other compatible guns. It’s possible that down the line the company will offer complete firearms chambered for 429 DE but for now it makes sense to test the waters with simple kits. 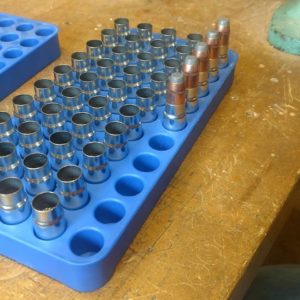 The 429 DE isn’t the first cartridge of its kind. About 20 years ago Cor-Bon wildcatters started working on a similar project with .440 Cor-Bon. While the cartridge never saw a lot of success, it’s clear that Magnum Research was a fan of the idea.

The two cartridges are different enough that they’re not interchangeable. Both use 50 AE brass and .44 Magnum bullets, but 429 AE has a 30-degree shoulder for improved feeding, extraction and headspacing. It also has a long neck for tight crimping.

Boxes of 20 shells have a suggested price of $42. Hopefully components and reloading dies will follow shortly.

While many shooters think of the Desert Eagle as a range toy, a gun for show, it really is one of the most capable semi-automatic hunting handgun on the market. The 429 DE cartridge takes things to a new tier.

Just like .440 Cor-Bon, 429 DE will be flatter-shooting than 50 AE and all-around superior to .44 Mag., which is already one of the most popular handgun hunting cartridges ever made.

This is a promising move and with Magnum Research supporting it, the 429 DE is going to have a lot more staying power than other like cartridges that have fallen into obscurity. If you take handgun hunting seriously, this could be your next move.  For more info visit MagnumResearch.com.

Next post: The Browning Hi Power: The Superlative WWII Combat Handgun That Played Both Sides