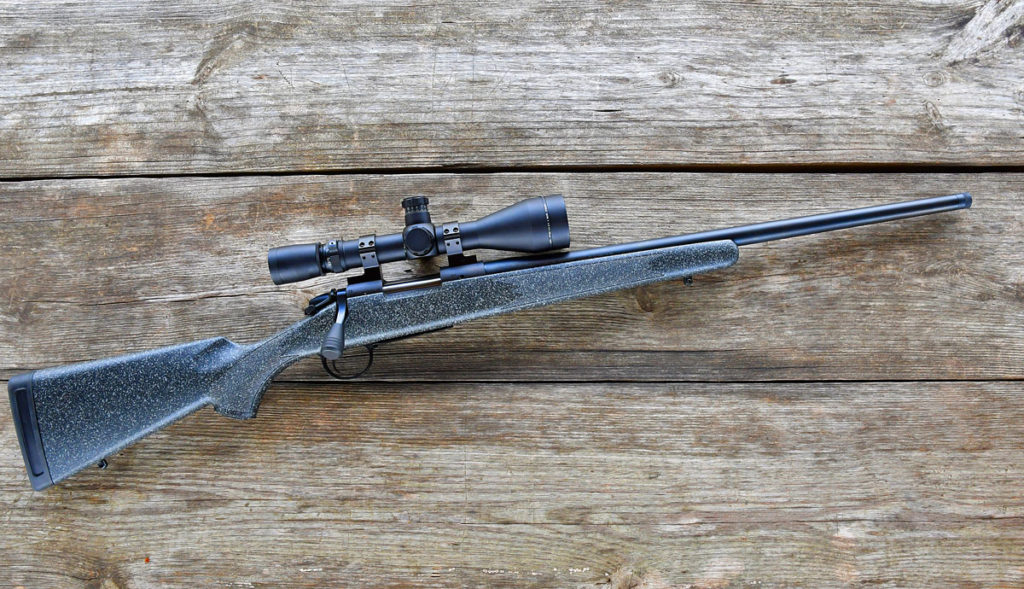 For those with more than a passing acquaintance with history, those words conjure up images of flashing swords, booming muskets and roaring cannons from an era of exploration, conquest, and piracy. For today’s shooters and hunters, those words are more likely to call to mind a brand that takes its name, Bergara, from a town in the gun-making Basque Country in the north of Spain.

Bergara built its reputation making aftermarket replacement barrels and barrels for rifle makers by melding button rifling, an older technology, with newer processes, robotics and state-of-the-art machinery to produce affordable, custom-quality barrels. What isn’t widely known is that Bergara did so in consultation with the late Ed Shilen, a legendary master barrel-maker. In 2012, BPI Outdoors, Bergara’s parent company, began making U.S.-built custom rifles using the barrels made in Spain. The guns quickly gained a reputation for accuracy but were expensive. The company then followed up by launching a couple of lines of production guns, making Bergara rifles available at more affordable prices. 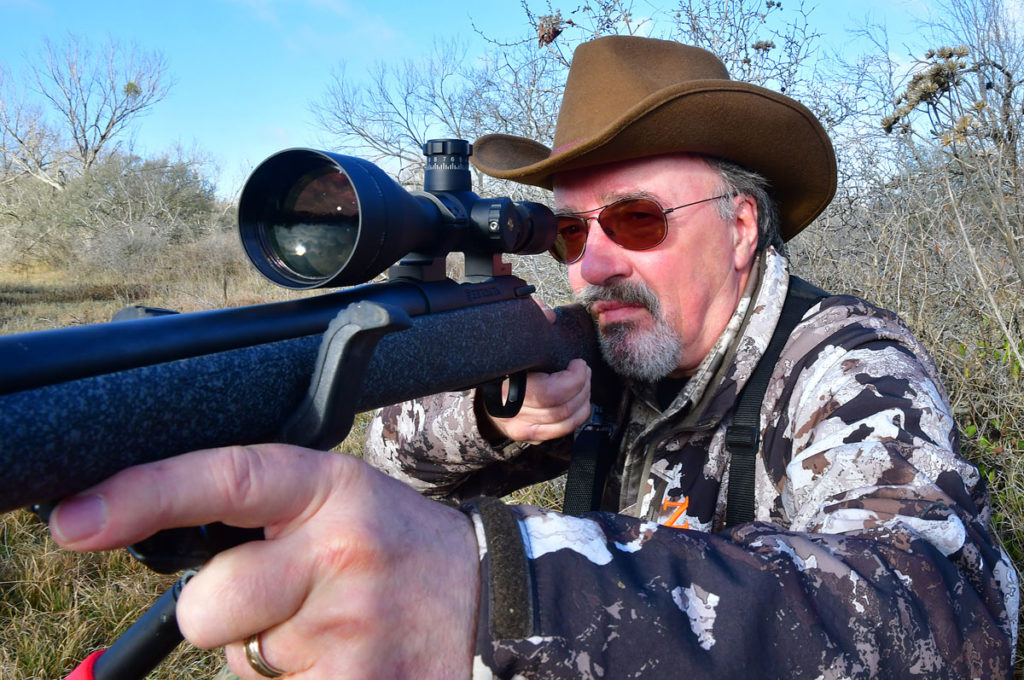 The author tested the Ridge at the range and in the field on a whitetail deer hunt in Texas.

Today, Bergara makes custom rifles as well as production tactical and hunting rifles that bring prices more in line with high-end production guns. Premier series rifles are priced in the $1850-$2,000 range, while the more affordable B-14 series rifles, with MSRPs starting at $825, are made entirely in the Spanish facility. The B-14 guns don’t have quite the sophistication or refinement of the Premier rifles, but they’re a real bargain when you consider what you’ll get for your money.

A case in point is the newer B-14 Ridge rifle, introduced last year, which I test drove at the range and in the field. The rifle passed with flying colors, as you’ll see momentarily, but here’s a closer peek under the hood. 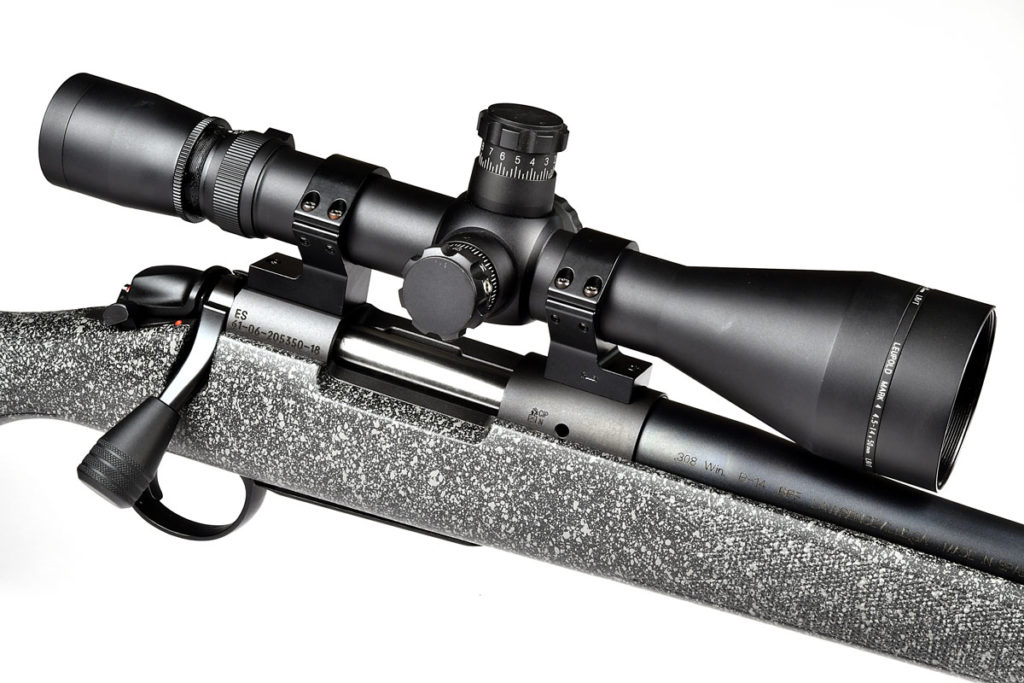 The rifle’s B-14 action cycled smoothly with no binding. The scope used for testing was a Leupold Mark 4 4.5-14X50mm model.

The rifle is built around Bergara’s B-14 action, which is somewhat based on a Remington Model 700 action. The design employs a proprietary, two-lug bolt with a Sako-style extractor, plunger ejector and a coned bolt nose for smooth feeding. The action is a slick-cycling one with no binding, and the bolt has a 90-degree throw, allowing ample room for mounting scopes. The action is drilled and tapped to accept Remington 700-style scope bases and rings.

The action is pillar-bedded to two solid epoxy pillars molded into a classic-style, glass fiber-reinforced polymer stock. One of the first things you’ll notice when picking up the rifle is that the stock has a tacky, grippy feel to it, thanks to a SoftTouch coating that provides a solid grip in any weather. As polymer stocks go, it is an attractive stock with a dark gray base color and black and white flecks. It’s equipped with a substantial rubber recoil pad and sling swivel studs. 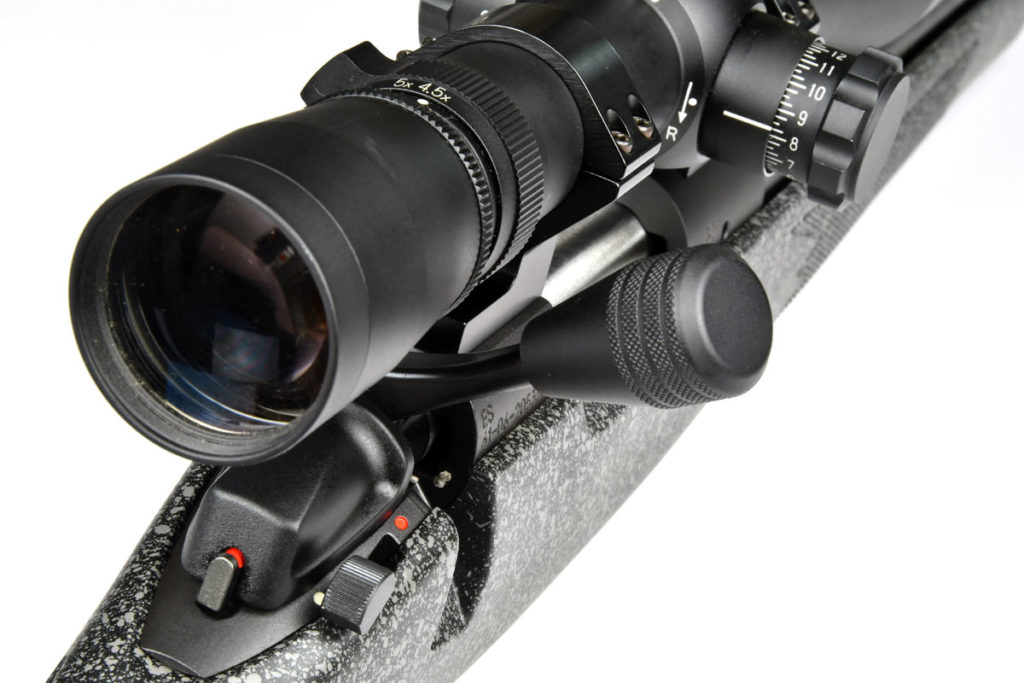 A 90-degree bolt throw provided ample room for scope clearance, and the oversize bolt handle makes it easy to cycle the action quickly for follow-up shots.

Free-floating in the stock is a No. 5 contour, 4140 Chromoly steel barrel, which I would describe as a medium-heavy contour. This contributes to the rifle’s weight of 7.9 pounds in the short action and 8.1 pounds in long-action version. This means the Ridge is no lightweight mountain rifle, but it’s light enough to be a versatile, everyday hunter with the advantages of stability and accuracy afforded by the high-quality Bergara barrels.

Since any rifle is only as good as its barrel – and Bergara is justifiably famous for its barrels – it’s worth a quick look at how the barrels are made. Bergara won’t reveal all of its manufacturing secrets, but the process starts with the steel blanks used for barrels, which must meet exacting tolerances before Bergara accepts them. They are straightened, if necessary, and a precise hole is drilled through the bar. The interior surface is then polished to a mirror-like finish using three separate honing spindles with diamond-tipped bits. A carbide rifling button is then drawn through the barrel, and it’s inspected to ensure groove diameter deviation of less than 2/10,000 of an inch. Barrels are then stress relieved using a high-temperature heating process. Because much of the work is done with advanced machinery, Bergara is able to equip rifles with custom-quality barrels at production-quality prices. 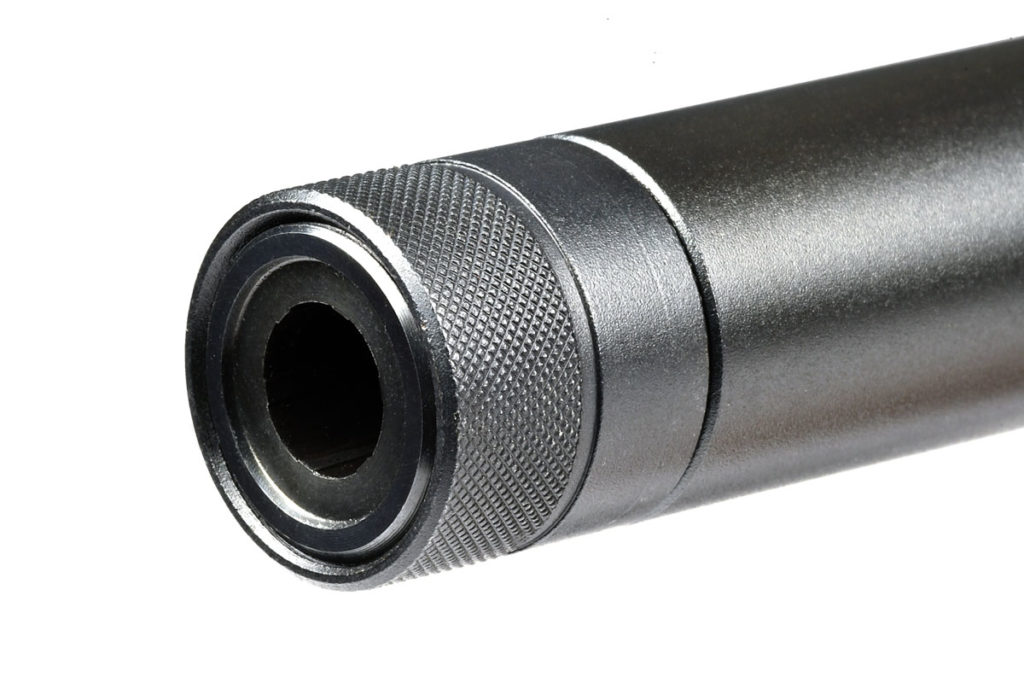 The rifle has a No. 5 contour barrel that’s heavier than most found on sporting rifles. The muzzle is threaded for attaching muzzle brakes or suppressors.

Short-action B-14 Ridge rifles have 22-inch barrels and long-action guns come with 24-inch barrels. The barrels are threaded 5/8×24 for attaching muzzle brakes or suppressors and have a finely knurled thread protector which, unlike many, doesn’t detract from the rifle’s clean lines.

In the hands, the Ridge feels well-made and fairly well-balanced, considering its substantial barrel. It’s easy to run the rifle fast thanks to its slick action and oversized, knurled bolt handle. Fit and finish are quite good.

The Ridge doesn’t have the Timney trigger you’ll find in Bergara’s more expensive rifles, but I found the one it does have to be quite good. Bergara says the trigger is adjustable within a range of 1.3 pounds to 4.4 pounds and the rifle ships with the trigger set to break at three pounds. The trigger on our test gun broke crisply at a consistent pull weight that was a bit lighter than that — two pounds, 12 ounces — with nary a trace of creep and little overtravel. I left it as it arrived, wishing that all sporting rifles came from the factory with triggers this nice. 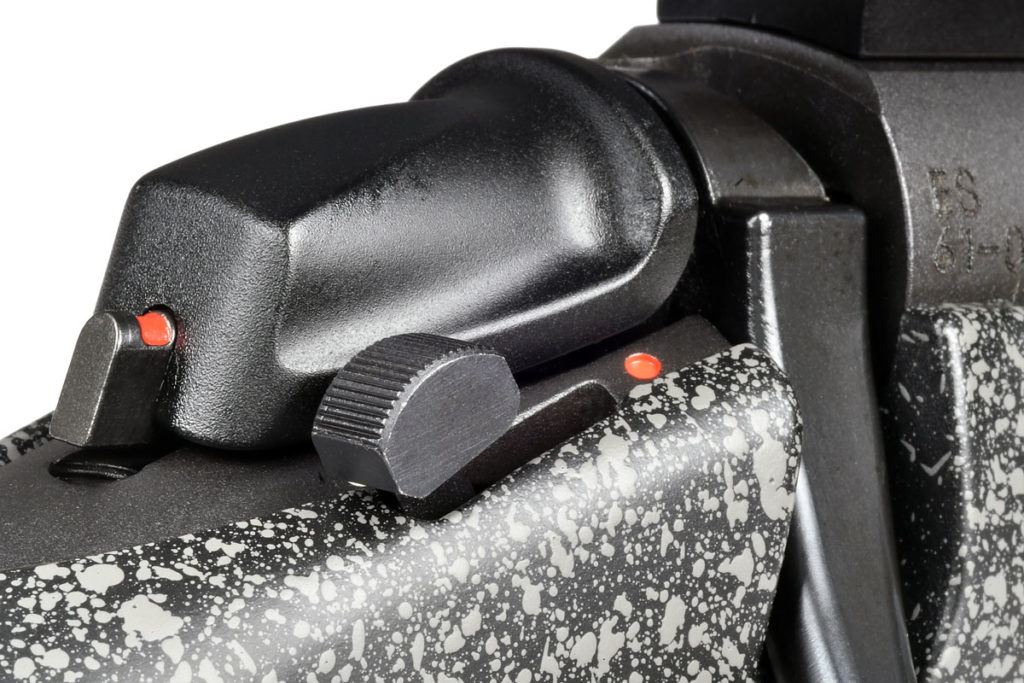 A two-position safety does not lock the bolt down when engaged. Also visible is a cocking indicator at the rear of the bolt shroud.

Mounted within easy reach of the thumb on the right rear of the receiver is a two-position, rocker-type safety which engages and disengages with just the right amount of authority. When engaged, it does not lock the bolt down. A red cocking indicator protrudes from the lower rear of the bolt shroud when the rifle is ready to fire.

The rifle sent to me for testing was chambered in 308 Win., and the barrel had a 1:10 rate of twist. In all, the Ridge is available in nine popular chamberings ranging from 22-250 Rem. to 300 Win. Mag., with caliber-appropriate rates of twist. The internal box magazine has a hinged, metal floorplate and a capacity of four rounds in standard calibers and three rounds in magnum persuasion. 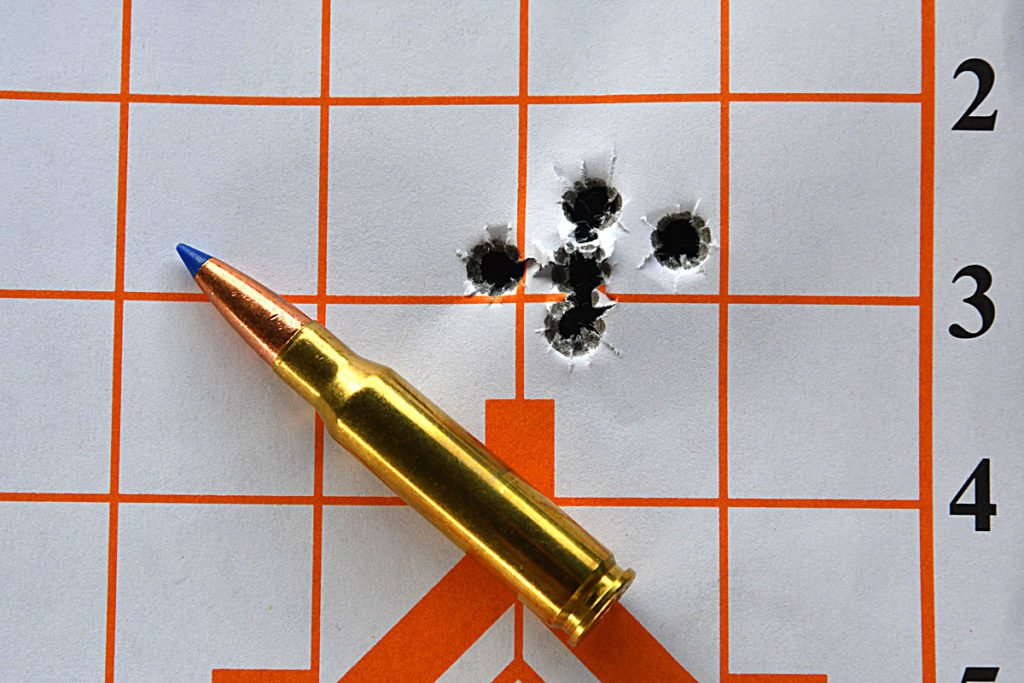 At the range, the rifle lived up to its MOA accuracy guarantee with three of five tested loads, showing a preference for heavier 168-grain bullets.

For testing, I mounted a Leupold Mark 4 4.5-14x50mm scope, a proven performer, in a set of long-favored Talley lightweight rings, and quickly discovered that the rifle lived up its MOA accuracy guarantee with ammo it liked. The rifle did better with heavier bullets, as three different 168-grain loads turned in sub-MOA five-shot groups, on a day when the wind varied seven to 14 mph, and I didn’t always give the gun a lot of time to cool down between shot strings.

One of the most accurate rounds was a Barnes load using 168-grain Tipped Triple-Shock bullets, and that’s the round I chose to hunt with when an opportunity arose to harvest one last deer for the season hunting with Frio County Hunts in south-central Texas. The operation is run by my pal Bryan Wilson, a veteran of Fallujah with the 2nd Battalion, 7th Marines. I’ve hunted many times with Bryan, who guides on his family’s low-fence Texas ranch and nearby ranches for whitetail deer, hogs, quail, javelina, turkeys and predators. I have never failed to connect on those hunts, and this time would be no different. 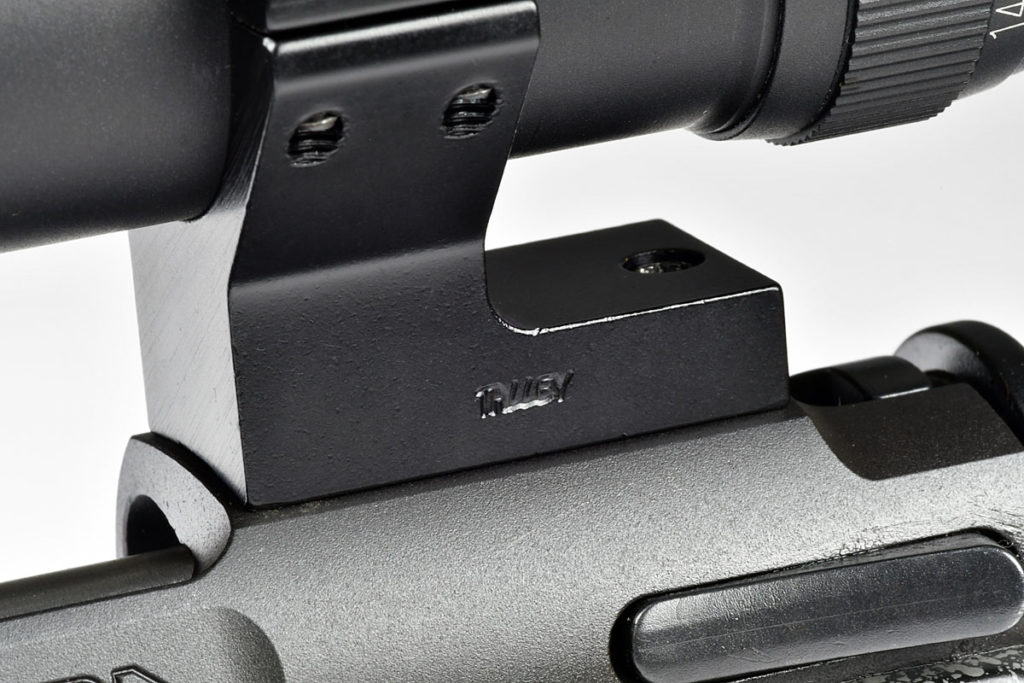 The receiver is drilled and tapped for Remington 700-style bases and rings. For testing, the author used long-favored Talley lightweight rings.

I settled into a blind with the B-14 Ridge in the dark. Well before first light, we could make out several deer moving in the open field to our front but had to wait for better light to judge a couple of bucks. We were looking for a management buck, meaning one Bryan wanted to remove from the gene pool, and just 30 minutes into our wait, we saw a mature seven-point buck, about 100 yards out, that fit the bill.

“You can take him if you want him,” Bryan said.

He was quickly answered with a single shot from the B-14 Ridge, as my goal was more venison in the freezer rather than antlers on the wall. The buck kicked and calmly walked into some brush bordering the field. I generally prefer to shoot animals in the shoulder when using monolithic bullets, but I didn’t want to waste any meat, so I placed the bullet just behind the shoulder. I could see blood pouring from the exit wound as the buck walked, and I knew he couldn’t go far. He didn’t. 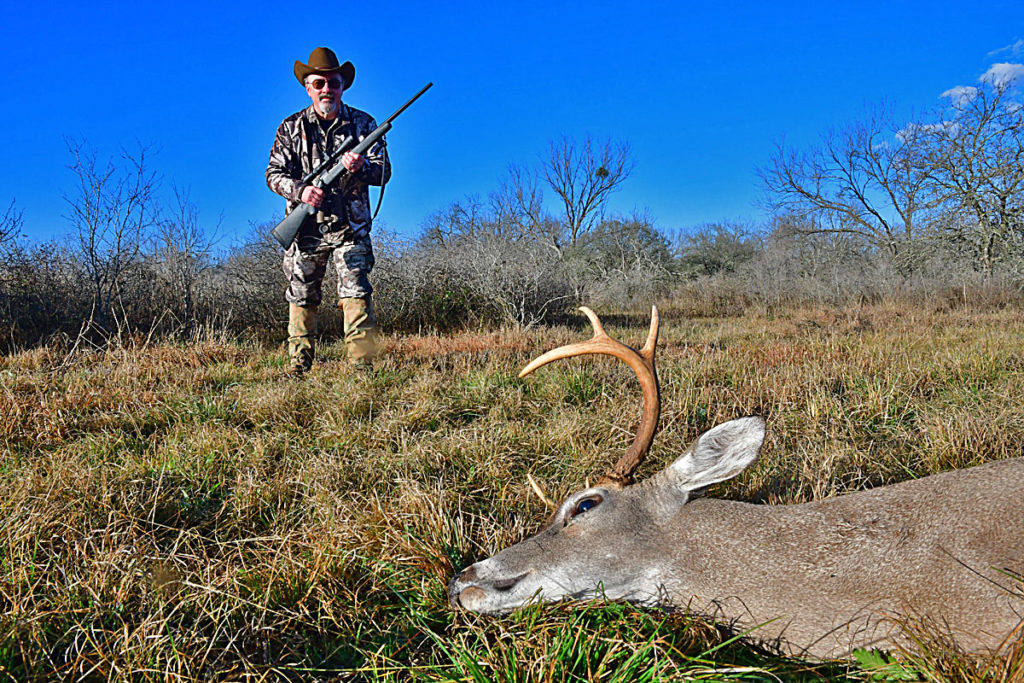 Just minutes after shooting the management buck, a magnificent 11-point buck, which was likely nudging a B&C score of 170, made a circuit around the outer edge of the field. I looked at the B-14 Ridge in my hands and knew it would be an easy shot.

Unfortunately, the buck was not in my budget that day. Happily, the B-14 Ridge rifle is. 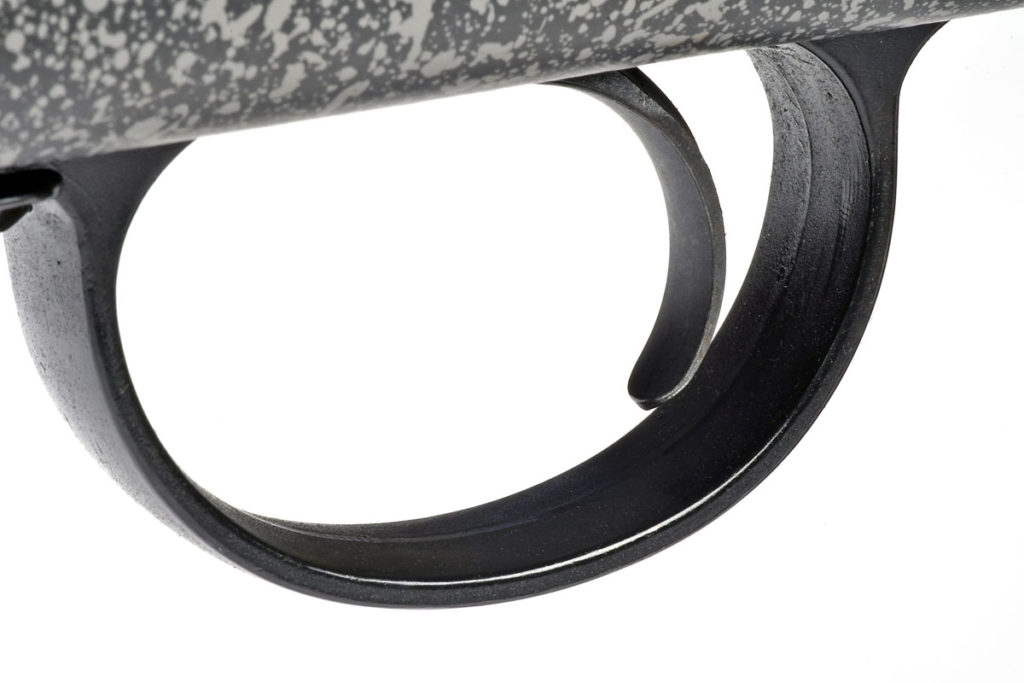 Although the trigger can be adjusted, the author found no need to do so. The trigger on our test rifle broke cleanly, with no creep, at a pull weight of two pounds, 12 ounces. 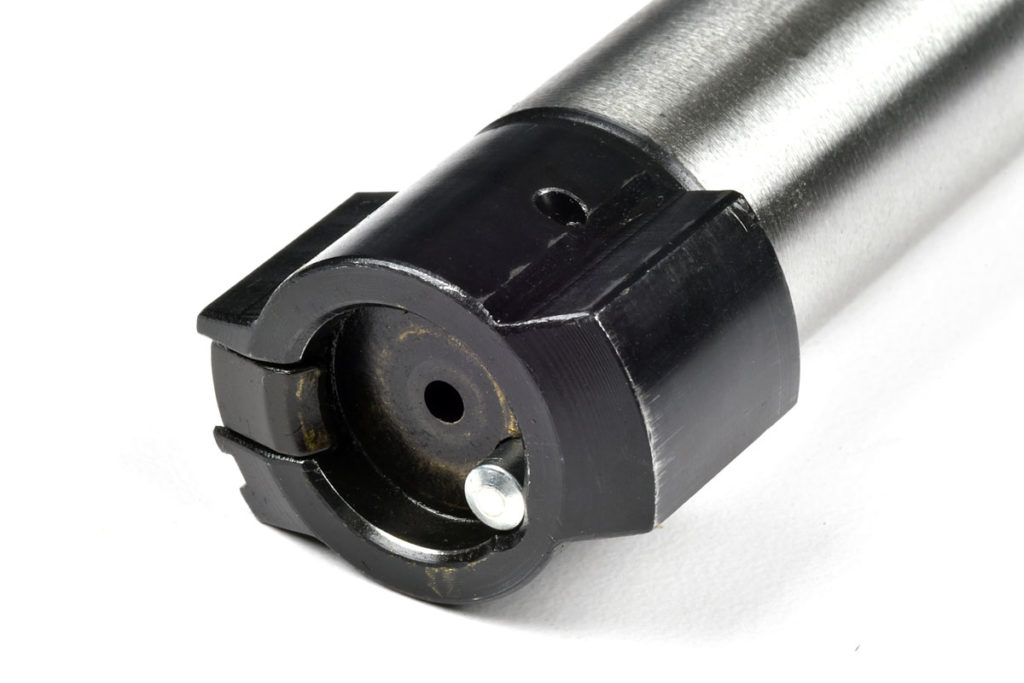 The bolt is a two-lug design with a Sako-style extractor, plunger ejector and a coned bolt nose for smooth feeding. 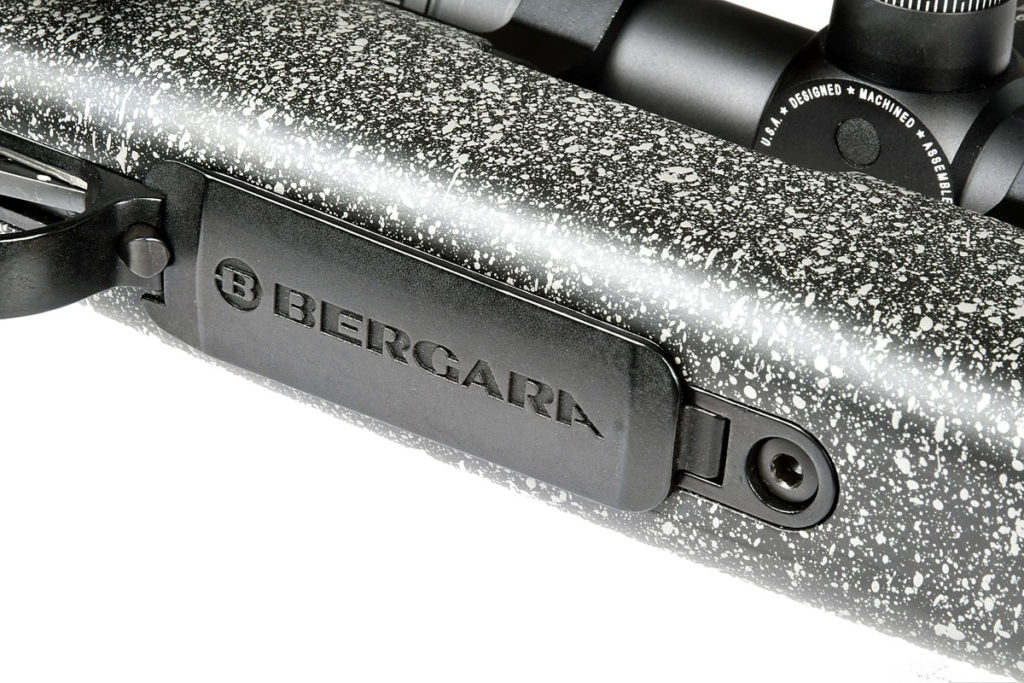 The magazine has a hinged, metal floorplate and a capacity of four rounds in standard calibers and three rounds in magnum chamberings. 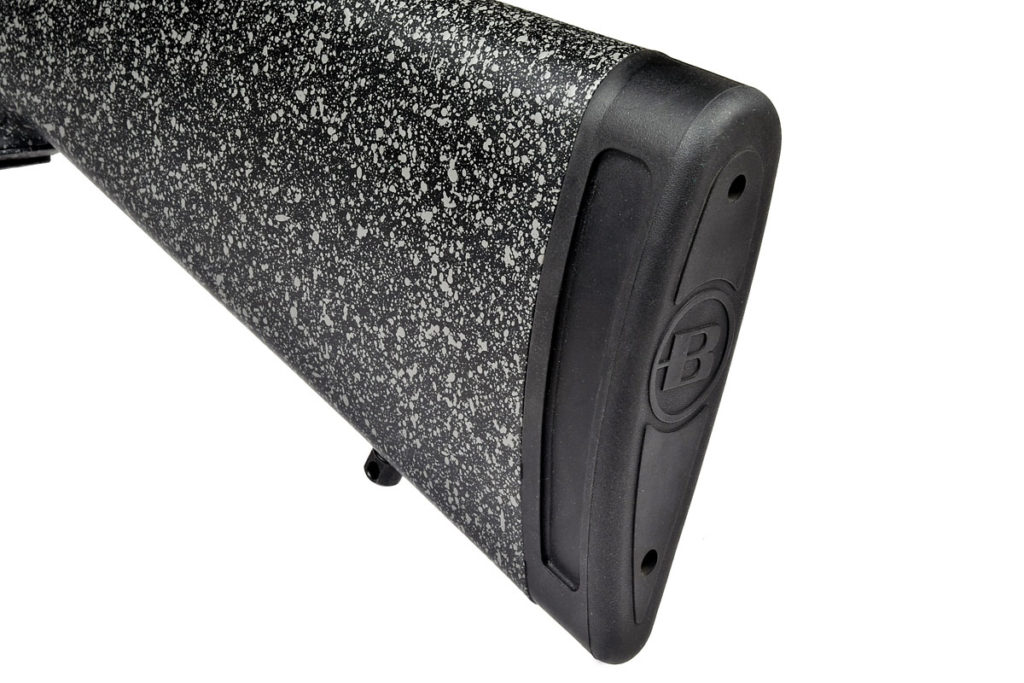 With a SoftTouch coating, the glass fiber-reinforced stock has a slightly tacky feel to it, providing a sure grip in any weather. 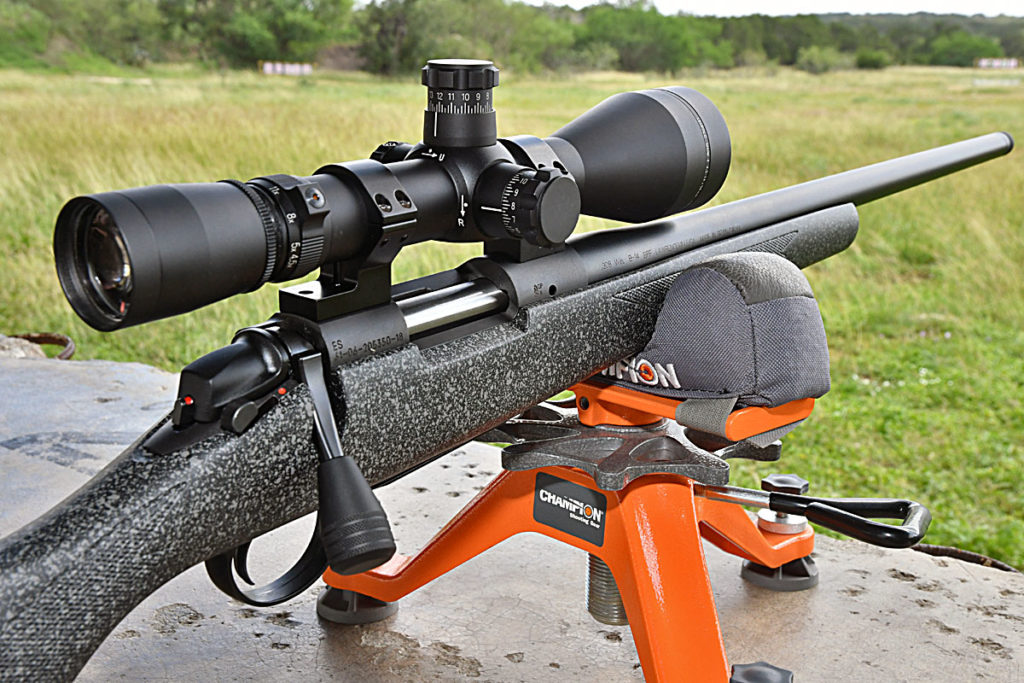 Equipped with a Leupold Mark 4 scope for testing, the B-14 Ridge performed well at the range and in the field. 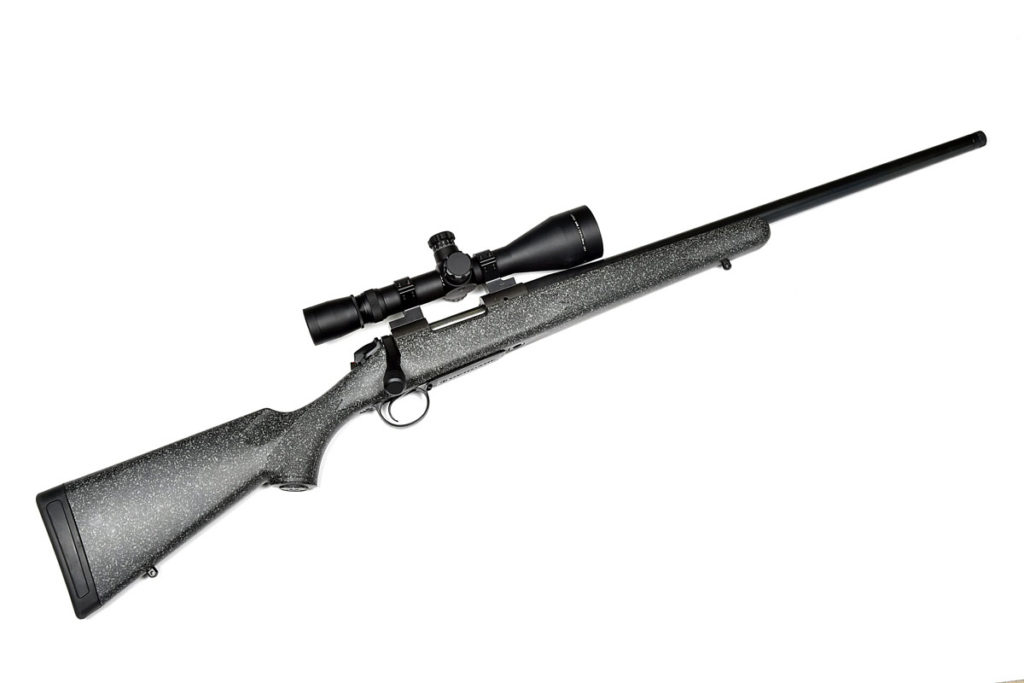 Although it doesn’t have quite the sophistication of Bergara’s higher-priced custom and Premier series rifles, the B-14 Ridge provides a lot of value for the money with an MSRP of $865.

Sights: None, drilled and tapped

Note: Velocity was an average of 3 shots, measured with a Competitive Edge Dynamics M2 chronograph. Accuracy is taken from three 5-shot groups at 100 yards in wind varying 7-14 mph.

***Shop GunsAmerica for your next Bergara rifle***