Crimson Trace is expanding their portfolio with a flight of new red dot sights and scopes. The company will be launching with one compact red dot sight, three micro red dots and a fixed-power scope. 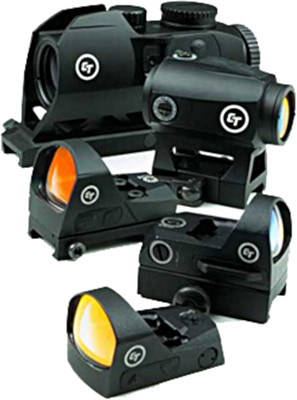 “This new line of red dot sights offers consumers high-quality optics products from a name they trust,” said Lane Tobiassen, Crimson Trace president and head of the American Outdoor Brands Corporation’s Electro-Optics Division. “We are very excited to introduce this new product line which has been carefully engineered and designed to meet the needs of consumers seeking quality and performance.”

Crimson Trace is calling these the CTS-1-series starting with the CTS-1000, an enclosed tubular red dot sight. It has a 2 MOA red dot, which is probably the most popular standard, and boasts an industry-leading up to 9-year battery life. That’s on one CR2032 power cell. Even if real-world performance falls short of that it still offers many years of power on one cell.

It’s of course shock, fog, water, recoil and impact resistant, like all of their new sights, and it has 1 MOA click adjustments for windage and elevation. It also has ambidextrous top-mounted brightness controls. It’s priced at $329 with the included spring-tensioned quick-detach mount. 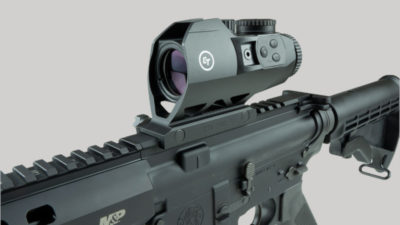 All of the new optics are night-vision compatible. (Photo: Crimson Trace)

Next up is the new CTS-1100, a fixed 3.5x scope with a powered bullet drop reticle. The scope has an integral mount for AR-height Picatinny rails. While Crimson Trace doesn’t list its battery life, one thing about true scopes is that they work with or without power. The CTS-1100 also takes a CR2032.

The CTS-1100 has .5 MOA adjustment knobs for more precise adjustment at longer ranges. It weighs in right at one pound with the mount and has a $599 suggested price, which puts it in the middle of the pack for fixed-magnification optics in terms of both weight and price.

The CTS-1200, CTS-1300 and CTS-1400 are all open mini red dot sights. The 1200 model is for pistols while the other two are for rifles and shotguns. They all have 3.25 MOA dots for rapid target acquisition and externally-accessible battery compartments. 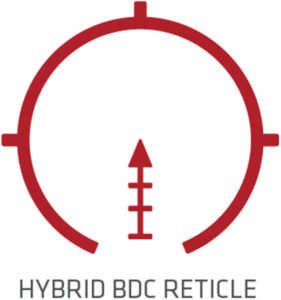 The reticle incorporates a large circle dot for speed and a BDC for accuracy. (Photo: Crimson Trace)

The CTS-1200 has the smallest footprint and sits very close to the bore for handgunners who want iron sights as backups on their red-dot-equipped pistols. It installs with Doctor and compatible mounts and runs $399

The CTS-1300 and 1400 are larger and come with Picatinny mounts. The 1300 is the more entry-level model with a $249 MSRP and 7 brightness settings, while the 1400 runs $469 and has 10 brightness settings. The CTS-1400 comes with another nice feature. It powers off automatically when not in use to maximize battery life.

It looks like Crimson Trace is working to become a player in optics in general. In addition to the CTS-1 series of modern handgun and long gun sights, they’re teasing three more series of optics on their website.

In their upcoming products section they have a 2-series, 3-series and 5-series of variable-power hunting and tactical rifle scopes. These are priced everywhere from entry-level and mid-range to higher-end price points and look like they have the features to merit those tags.

Expect to see the CTS-1 series this November. As for the rest, we’ll keep you informed.  For more information visit CrimsonTrace.com.