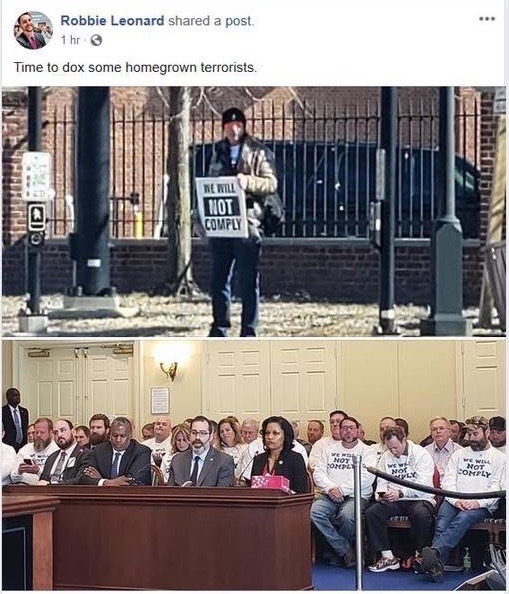 Maryland Democratic Party Secretary Robbie Leonard is in hot water for a recent Facebook post.  The post, consisting of a picture of a 2A supporter carrying a sign that states, “We Will Not Comply,” included the statement, “Time to dox some homegrown terrorists.”

“Doxing” is the practice of researching and publishing private information about an individual or organization online.  The practice is considered to be an invasion of personal privacy.

The Facebook post, which has since been deleted, was posted in response to a rally at the Maryland Capitol and quickly went viral.  The rally was attended by members of a pro-2A group called The Patriot Picket.  The group’s slogan is, “We Will Not Comply.”  The slogan is the group’s way of communicating that they have “had enough” of gun control regulations.

The protest was organized to speak out against new proposed gun legislation in Maryland.  Lawmakers there are considering bills that would: (1) add new requirements to the sale and transfer of shotguns and rifles; (2) make the manufacture of 3D-printed “ghost guns” illegal; and (3) add the Colt AR-15 Sporter H-Bar rifle to the existing list of regulated firearms, essentially banning its possession if purchased after October 1, 2013.

One member of The Patriot Picket who attended was Paul Brockman.  Brockman did not appreciate Leonard’s Facebook post.

“We think it’s disgusting,” Brockman told A Miner Detail.  He [Leonard] should apologize for it.  I mean, anybody who would . . . and, unfortunately we see it more and more on the Democratic side.   They don’t want people exercising their First Amendment rights.  And that was their First Amendment right to go out there on the sidewalk and say whatever they want — pro-gun, anti-gun.”

The Democratic Party Executive Director provided a written statement when asked by A Miner Detail to respond to Leonard’s post.

“When discussing firearm regulations, the specter of gun violence is always present.  These fraught conversations require peace and healing, not escalated conflict.  When activists wear shirts stating ‘We will not comply’ with new firearm regulations, that action escalates the conflict and a willingness to flout the rule of law.  Doxxing escalates the conflict, and violates rights to privacy.  The Maryland Democratic Party respects the rule of law, and peaceful participation in the legislative process.  We ask that advocates on both sides do the same,” the statement read.

Patriot Picket founder, Jeff Hulbert, told A Miner Detail that the Facebook post and follow-up response is “a typical reaction from Democrats who want to feel first and then think later.”

“Government can’t operate when Democrats only navigate with their feelings, ” Hulbert said.