And So It Begins: House Dems Move to Ban AR Parts Kits 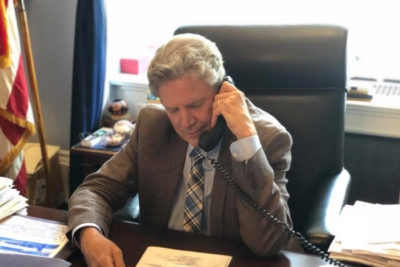 Democrats filed H.R. 7115 even before they regained control of the U.S. House of Representatives, and now that they hold a solid majority, they’re ready to make their gun control fantasies come true.

Rep. Frank Pallone, Jr., a Democrat from New Jersey, filed the legislation on November 2, 2018, and it’s being co-sponsored by 13 additional representatives. The bill would “prohibit the sale, acquisition, distribution in commerce, or import into the United States of certain firearm receiver castings or blanks, assault weapon parts kits, and machinegun parts kits and the marketing or advertising of such castings or blanks and kits on any medium of electronic communications, to require homemade firearms to have serial numbers, and for other purposes.”

Under H.R. 7115, gun manufacturers would no longer be permitted to sell partially machined receivers for “assault rifles.” Also called “80 percent lowers,” these items do not qualify as “firearms” under U.S. law and have long been a target of gun-control lobbyists because they allow individuals to create “ghost guns,” or firearms without serial numbers.

For those wanting to manufacture a firearm without using an 80 percent lower, H.R. 7115 also requires all individual firearm makers to request a serial number from the federal government before creating a firearm. The prospective gun maker would contact a federal firearms dealer, who would issue the number using the same process as any other firearms transfer.

(a) In General.—It shall be unlawful to market or advertise, on any medium of electronic communications, including over the Internet, for the sale of any of the following:

(A) at the point of sale does not meet the definition of a firearm in section 921(a) of title 18, United States Code; and

(B) after purchase by a consumer, can be completed by the consumer to the point at which such casting or blank functions as a firearm frame or receiver for a semiautomatic assault weapon or machinegun or the frame of a handgun.

It’s unclear why the bill bans the advertising of already prohibited items, but political grandstanding has always trumped logic on the anti-gun priority list.

For those hoping to get around the law by simply purchasing individual parts rather than a complete kit, the bill has that covered, too. It defines “assault weapon parts kit” as “any part or combination of parts designed and intended to enable a consumer who possesses all such necessary parts to assemble a semiautomatic assault weapon.”

So much for that loophole.

Gun owners can also say goodbye to building Ruger 10/22’s. A “semiautomatic assault weapon” is, according to the bill, “a semiautomatic rifle or semiautomatic shotgun that has the capacity to accept a detachable ammunition feeding device.” Under H.R. 7115, a parts kit for a .22-caliber child’s rifle would be considered just as deadly as a kit for an AR-15.

With the Democrats in control of the House, passage of H.R. 7115 is more than possible in that chamber. The Senate is a different story, as Republicans expanded their majority, and President Trump has remained a solid supporter of Second Amendment rights, despite some concerns early in his presidency.

Still, Washington is the capital of backroom deals, and it wouldn’t be the first time Republicans concede ground on one issue to get what they want in another arena. H.R. 7115 doesn’t ban “assault weapons,” after all, and who really cares about 80 percent lowers?

Gun owners can contact their House representative here and their Senators here.

Previous post: The Most Epic Response to the #ThisIsMyLane Battle Between Physicians and the NRA