One of the more anticipated rifles from FN has been the SCAR 20S, based on their Mk 20 SSR (Sniper Support Rifle) that’s been in service with special operations forces since 2010. A lot of people want to know how much was changed from the military MK 20 SSR to the 20S and truthfully not a lot according to FN.

The longer receiver free floats the barrel but also allows the bipod to be mounted out farther for more stable shooting in the prone compared to the 17S carbine.

Basically, the 20S is going to differ from the issue SSR in the fact that it has a different muzzle device, no iron sights, and has been modified to fire semi-automatic only to comply with NFA regulations. 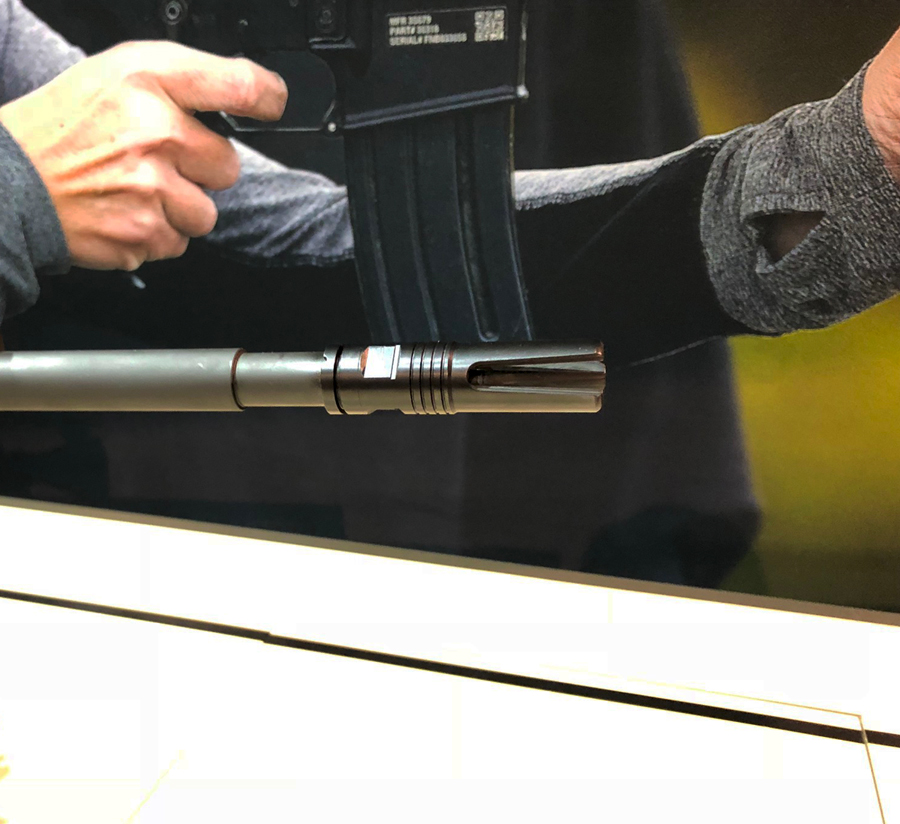 FN uses their own 3-prong flash hider on the SCAR 20S as a cost-saving measuring since the military-specific suppressor adapter would greatly up the price.

To me, the most striking aspect of the 20S is its upper receiver that is six inches longer than a standard SCAR 17 so that it can accommodate inline optics such as night vision or thermals. It also free floats the 20″ cold hammer forged, chrome-lined, heavy contour barrel that’s chambered in 7.62X51. Some people might think that a chrome-lined bore will be detrimental to accuracy but remember this rifle is based on one that was designed for the harshest conditions imaginable.  Plus, each SCAR 20S has to shoot five 5-shot groups to meet the same 1 MOA accuracy requirements as the Mk 20 SSR.  Now FN didn’t just lengthen the receiver and put a heavier barrel on it to call it good, they also revised the barrel nut to be 50% longer and heavier to create a more rigid interface for better accuracy. 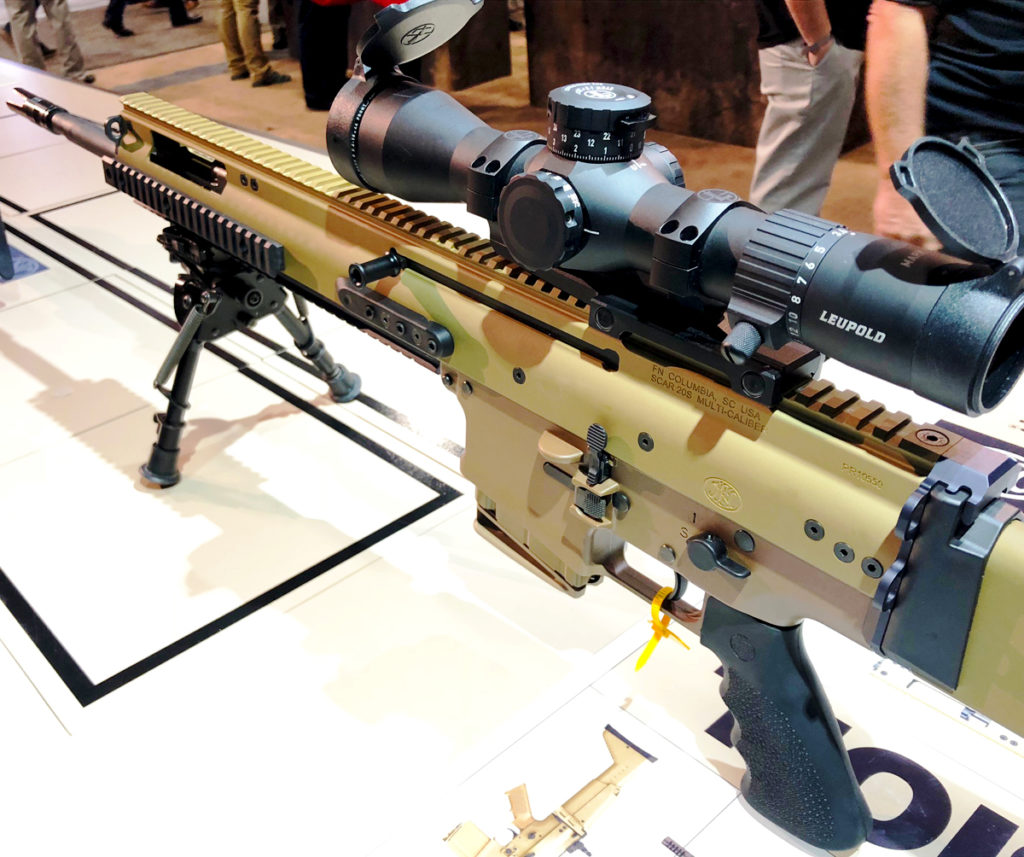 The major controls on the 20S are either ambidextrous or able to be configured for right or left-handed shooters.

Inside the lower receiver lurks Geissele’s Super SCAR Trigger to provide a consistent trigger pull for better accuracy compared to the stock SCAR trigger. The Super SCAR is a two-stage trigger that has a nominal trigger pull of 3.5-4.5 pounds.  If you’ve ever used a Geissele trigger then you know why they are the choice of professionals all over the world. 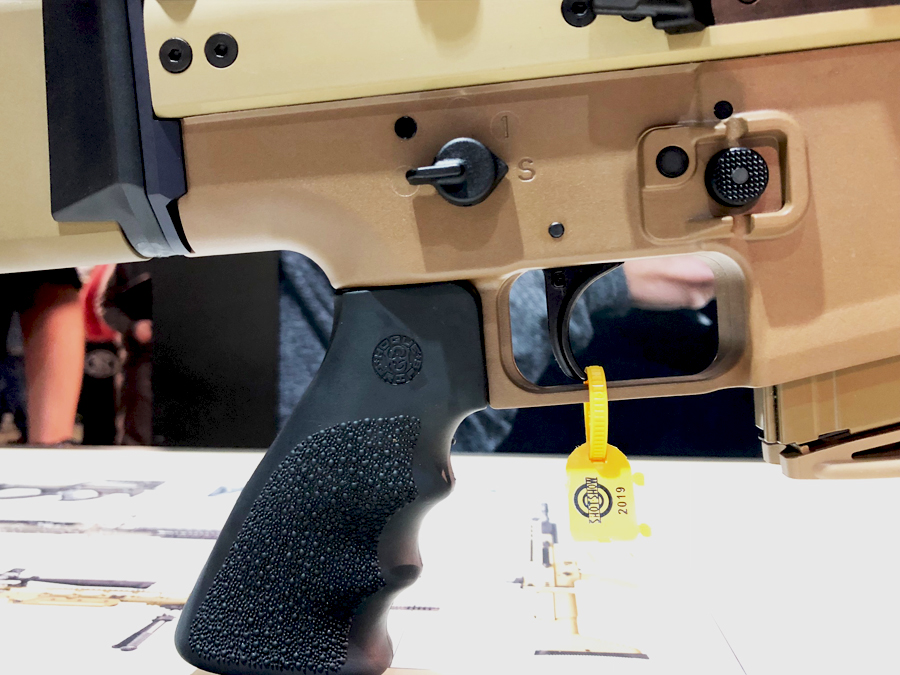 The Hogue grip is standard on both the SSR and 20S but it can also be easily swapped out if the shooter desires a different pistol grip.

The stock is the same as it is on the SSR, it’s non-folding but adjustable for comb height and length of pull, featuring a long section of Picatinny rail underneath. 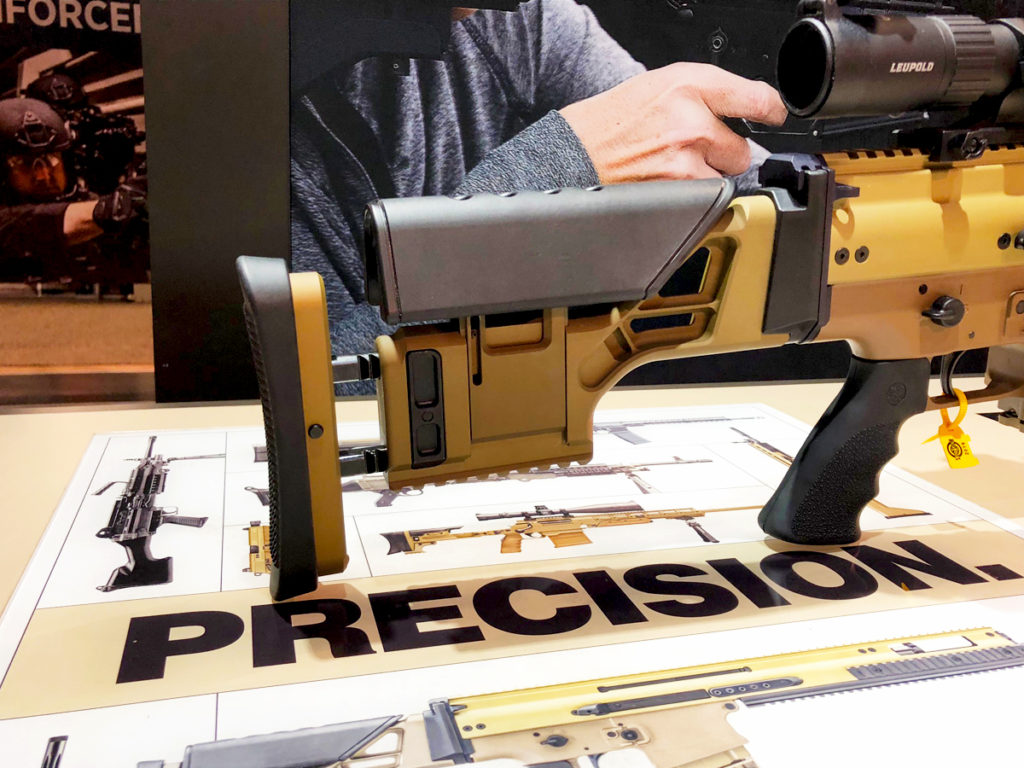 Even though the stock doesn’t fold it’s not like the rifle is super long either compared to other contemporary semi-auto precision rifles.  Depending on where the length of pull is set to, the overall length is between 40.6″ and 42.5″.   The stock, lengthened receiver, and heavy barrel contributes to an overall weight of 11.2 pounds (minus any optics), which is again in line with many semi-auto precision systems.