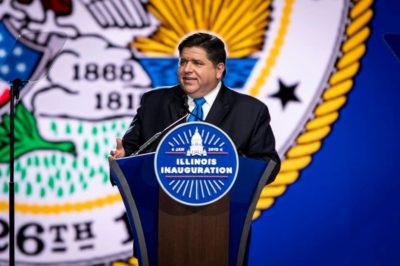 Last Thursday, three days after being sworn into office, newly elected Illinois Gov. J.B. Pritzker (D) signed legislation regulating firearm dealers in the state.  Under the new law, it will be illegal for retailers to sell firearms without first obtaining state certification.

In order to obtain certification, stores must be licensed by the Bureau of Alcohol, Tobacco, Firearms, and Explosives (ATF).  Then the store must submit a copy of its ATF license along with an affidavit declaring the license is current and valid to the Illinois State Police.  Shops will also have to install surveillance equipment, maintain an electronic inventory, establish anti-theft measures and require employees to complete annual training.

Registering with the state will cost $300 for independent dealers and $1,500 for retail shops.  The requirement will affect approximately 2,400 gun dealers in the state.

“Just because we’re signing this today doesn’t mean there isn’t more to do,” Pritzker said at the signing ceremony held at an elementary school in Chicago.  “But this particular bill is very important.”

Pritzker also said that he wants the state to outlaw bump stocks and trigger cranks this year.

The new law was passed by the Democrat-controlled General Assembly last year, but Democrats used procedural rules to prevent it from being vetoed by outgoing Republican Gov. Bruce Rauner.  Rauner vetoed a similar law in the spring because the federal government already licenses firearm retailers.  Rauner indicated at the time that adding another layer of oversight would be costly for businesses and “do little to improve public safety.”

Supporters of the law believe that federal regulators are stretched too thin to properly supervise firearm dealers in the state.  They believe that the extra level of regulation will reduce gun violence by preventing illegal gun purchases as well as “strawman transactions” in which someone buys a firearm on behalf of a person who is legally prevented from doing so.

The Illinois State Rifle Association indicated it will file a lawsuit to challenge the new law.

“The federal government already licenses gun dealers.  There is no need to add yet another layer of bureaucracy on gun dealers,” said executive director Richard Pearson in a statement.  “The only thing this measure is going to do is make it cost more money for gun dealers to do business in Illinois, which is going to hurt the smaller dealers.  The action taken today is another assault on our 2nd Amendment rights.”

“Rest assured we will be challenging this new law in court,” Pearson said.