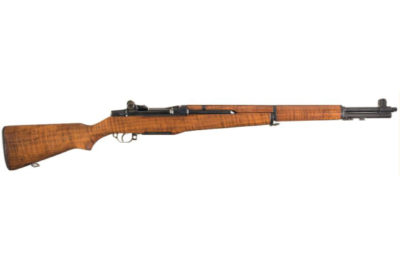 In 1936 John C. Garand transferred the rights to the M1 Garand to the U.S. government. His invention would go on to serve American GI’s faithfully as they fought to protect freedom and democracy around the world, but the inventor never received any compensation beyond his standard government salary.

He refused numerous and substantial offers from foreign governments and arms companies for the rights to his design, but upon his retirement he accepted the one millionth M1 Garand as a token of his nation’s appreciation.

That rifle sold last week for $287,500 through the Rock Island Auction Company.

“There have been very few firearms belong to historic figures that perfectly encompass what those individuals accomplished in life,” says Joel Kolander, a Rock Island representative in a promotional video. “This rifle is more than the greatest battle implement ever devised. It’s more than an invention used to protect democracy, as Garand himself put it. This is the legacy of a man who selflessly helped the nation he loved. The rifle that he gave his nation is the rifle his nation gave him.”

The firearm bears the serial number 1,000,000 and has remained in perfect condition since its manufacture in 1942. It was placed in storage for over a decade and presented to Garand when he retired from a 34-year career at Springfield Armory.

It was acquired by then-NRA President Allen Cors in 2003, who recently decided to sell the piece at RIA’s September Premier event.

Rock Island describes the rifle as “the apex of any advanced M1 Garand rifle collection or any high end martial arms collection.” It features all correct parts and is fitted in “the most beautiful, highly figured, regular production M1 Garand stock and handguard sets we have ever seen,” according to RIA. The package also comes with its original inscribed walnut presentation case, a presentation silver plated clip, and eight gold-plated dummy cartridges.

It also comes with a $1.00 check and a letter from Dorothy Jerome of Helena, Montana, who wished to contribute to Garand’s “share of what is due… for his invention of the M1.” Garand never cashed the check.

The M1 Garand is one of history’s most famous battle rifles. Americans (and their allies) used M1s throughout WWII as well as during the Korean and Vietnam wars. General George S. Patton famously called it “the greatest battle implement ever devised,” and the rifles remain highly collectible.

Fortunately for the Average Joe, most don’t sell for $287,500. The average price has increased in recent years, though they can still be found for around $1,000 on GunsAmerica.

Next post: How to Survive Hurricane Florence: Shoot At It!