Lee-Enfield Rifle: The Long Arm of the British Empire and the story of Lachhiman Gurung 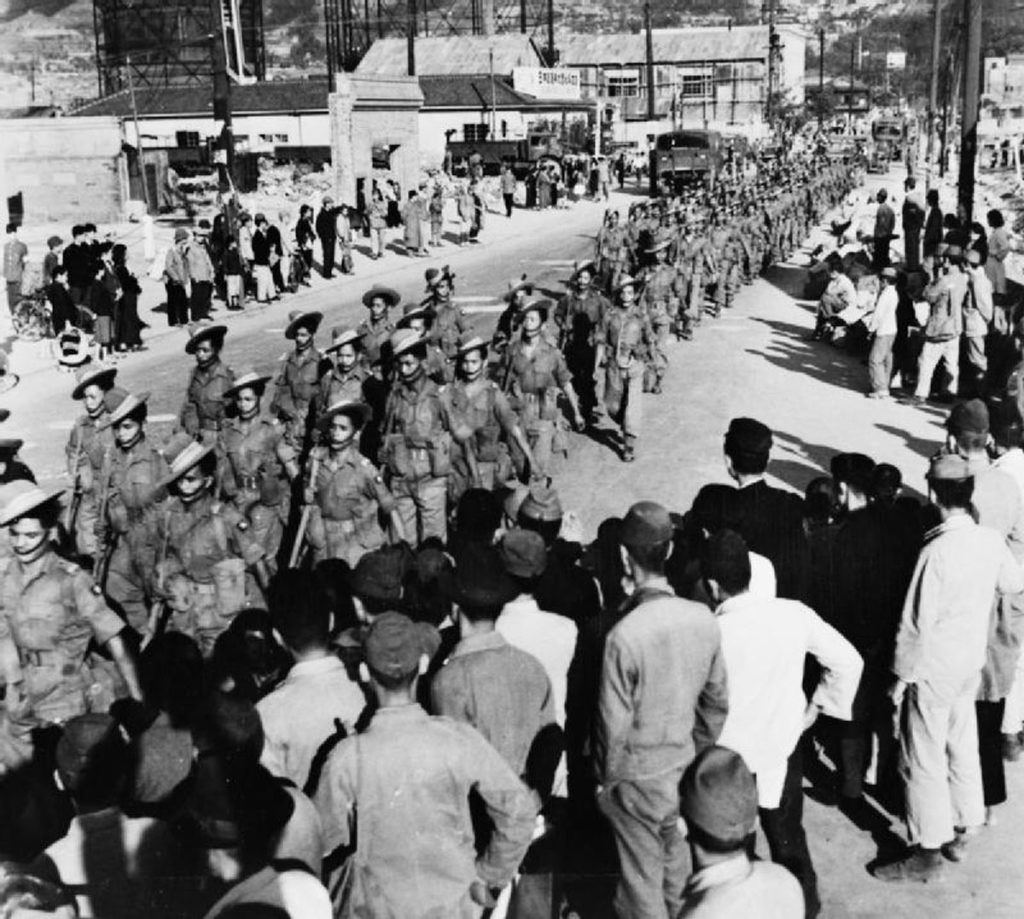 The Nepalese Gurkhas are legendary fighters who have served the British crown for generations. 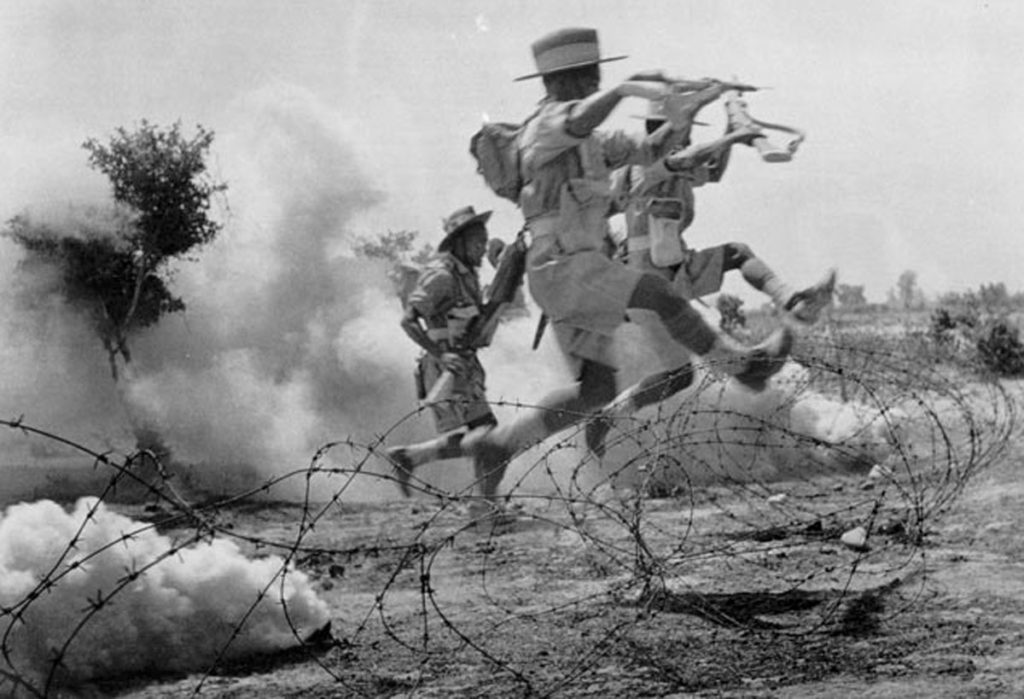 Lachhiman Gurung seemed an unremarkable sort. He stood all of four feet eleven inches tall when he left his village to buy cigarettes for his father and ended up enlisting as a Gurkha in the service of the British Empire on a whim. However, on May 12, 1945, deep in a Burmese jungle Lachhiman Gurung proved that sometimes some of the most remarkable stuff comes in compact packages.

Gurung’s fighting position was at the foremost vanguard of his unit’s defensive emplacements standing ready against a pending Japanese attack. When the Japanese came they led with 200 seasoned assault troops. In fairly short order Gurung was alone, the rest of his mates either dead or dying. 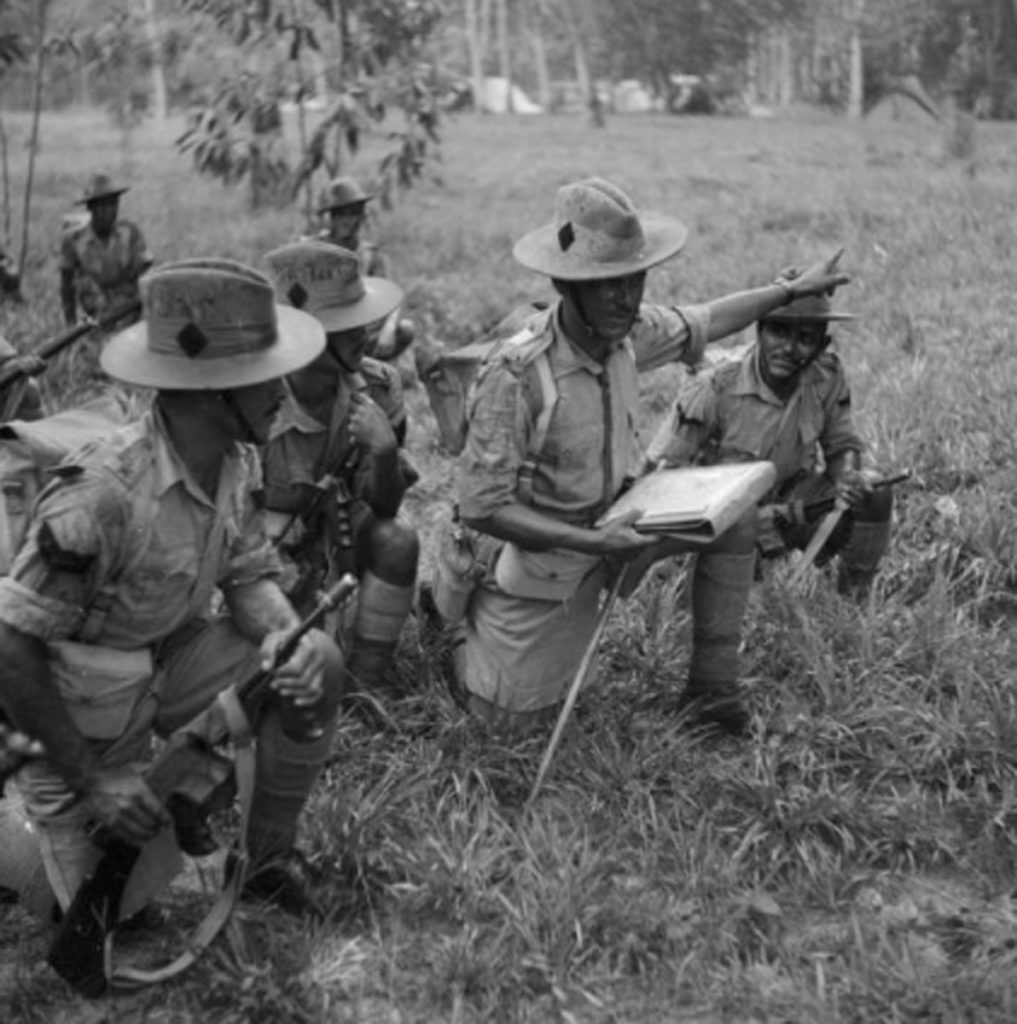 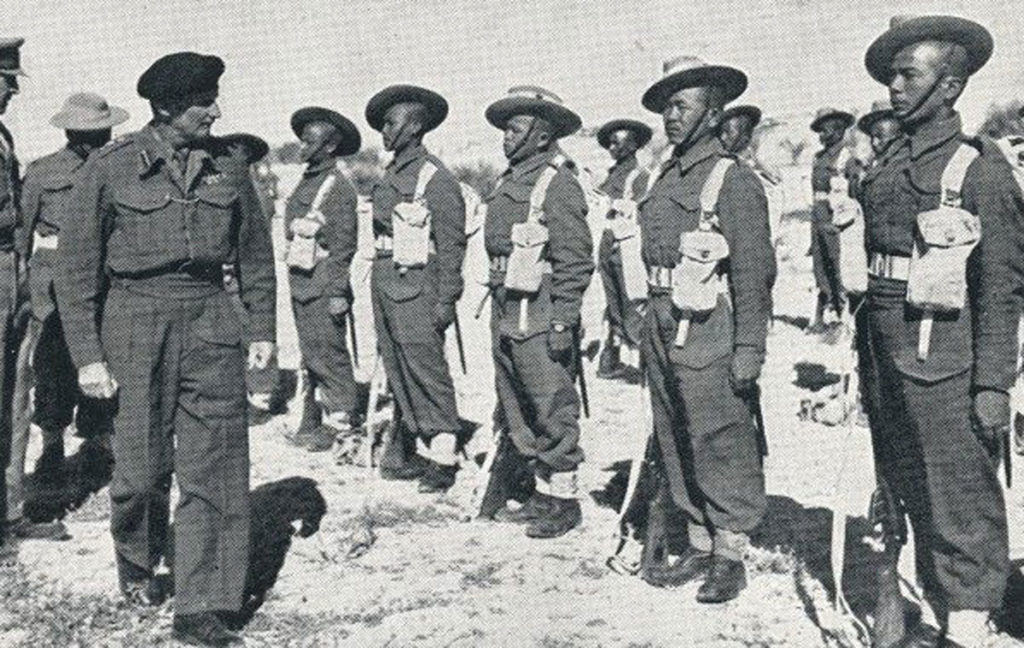 Once the Japanese troops got within hand grenade range they began pelting Gurung’s position with grenades. Gurung picked up the first two and threw them back at his attackers. When he hefted the third it detonated in his hand, removing most of his right hand, blinding his right eye, and peppering his body and face liberally with shrapnel. Where most normal humans would have the good grace to just lay down and die, Gurung unsheathed his Kukri knife, shoved it into the ground at the lip of his foxhole, and announced to the Japanese that they would get no further than that knife. He then hefted his Lee-Enfield rifle, chambered a round with his left hand, and invited the Japanese to see what it was like to, “Come fight a Gurkha.” 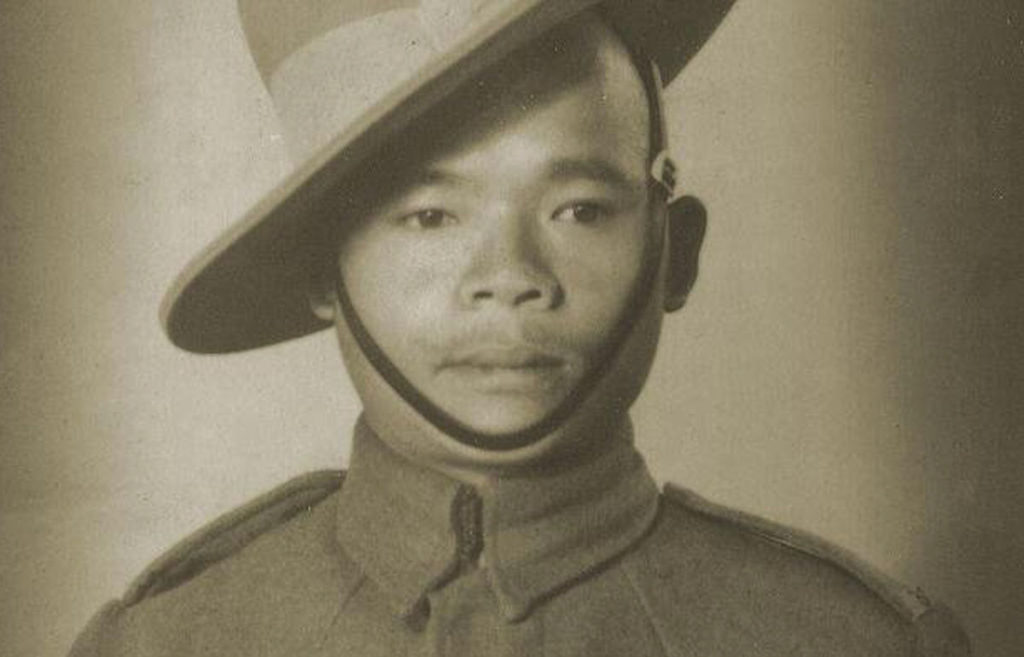 At only 4 feet 11 inches tall, Lachhiman Gurung did not seem like a particularly imposing figure. However, behind a Lee Enfield rifle he wrought sheer havoc upon attacking Japanese forces despite grievous wounds.

The Japanese accepted Gurung’s offer. For the next four hours, Lachhiman Gurung ran his bolt-action Lee-Enfield rifle one-handed, setting the rifle down to work the bolt or reload with his left hand before taking it up again to kill more Japanese. When the Japanese got close enough to overrun his position Gurung would lay down, let them come in close, and then jump up to cut them down at point blank range, all the while running his bolt-action rifle with his single remaining hand.

When he was finally relieved, there were thirty-one dead Japanese soldiers in and around Gurung’s fighting position. He was heard by nearby troops shouting, “Come and fight! Come and fight! I will kill you!” in an effort at taunting the Japanese in closer. Lachhiman Gurung was awarded the Victoria Cross, Britain’s highest award for valor in combat, for his actions that night in the sweltering Burmese jungle. The fanatical defense of that forlorn combat outpost by a single Nepalese Gurkha, himself less than five feet tall, demonstrated to all involved that a single determined man with a rifle can be a formidable combat implement.

The SMLE No 1 armed British troops throughout World War I and into World War II. Many Commonwealth soldiers used this reliable bolt-action repeater through the end of the conflict. 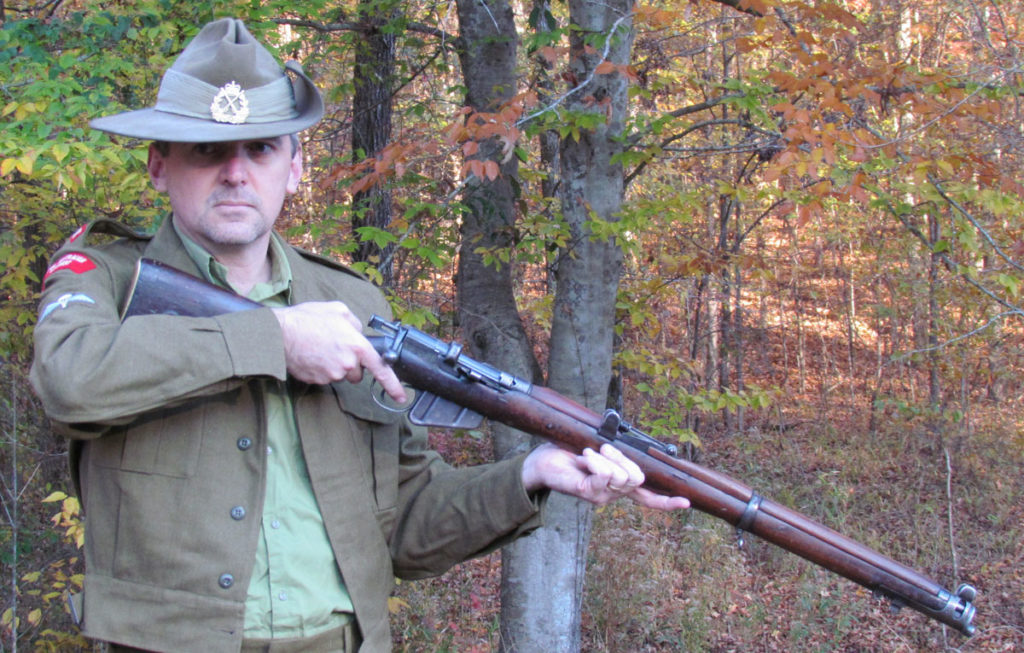 The Lee-Enfield rifle was first adopted in 1895, and it soldiered on through a variety of marks until it was finally supplanted by the L1A1 variant of the FN FAL in 1957. More than 17 million of the guns saw service. Possession of a Lee-Enfield rifle marks one as a warlord of distinction in Afghanistan even today. Designed by a Scotsman named James Paris Lee, the Lee-Enfield superseded the Lee-Metford rifle. Its longevity in service is exceeded solely by the Russian Mosin-Nagant.

The Lee-Enfield in its sundry guises fed from a detachable ten-round box magazine. However, in action troops were trained to charge the rifle from the top via either loose rounds or five-round stripper clips. Early SMLE (Short Magazine Lee-Enfield) No 1 versions featured a pivoting magazine cutoff plate that only allowed the weapon to be fired one round at a time. Troops who carried the SMLE referred to it affectionately as the “Smelly.” At the time it was introduced it was thought the magazine cutoff might reduce the British troops’ tendencies toward profligate ammunition expenditure. As mechanical restrictions on one’s onboard ammo supply are typically not terribly popular in combat this superfluous appendage was deleted in short order. 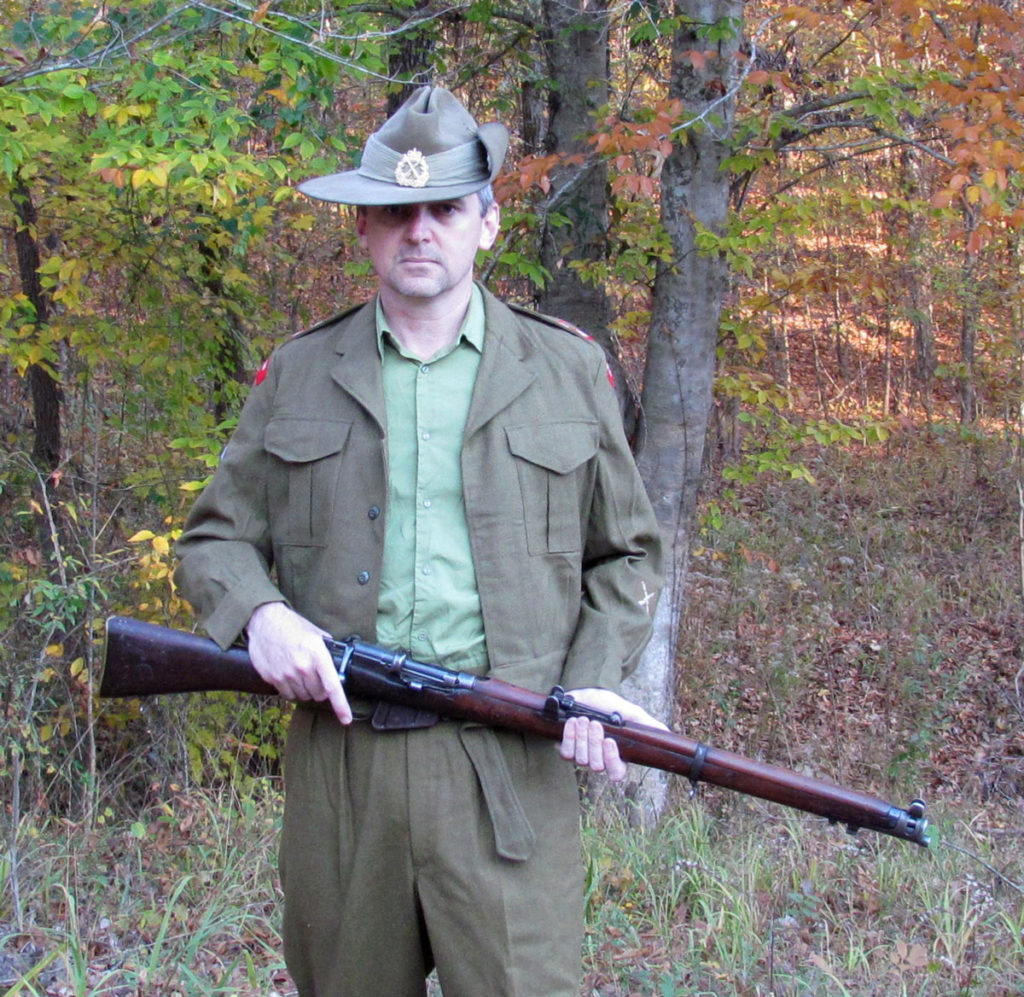 The Lee-Enfield sported rear-locking lugs along with a short bolt throw. In addition, the action cocks on closing while most competing designs cock when you open the bolt. This all conspired to give the Lee-Enfield rifle an exceptionally high rate of fire in the hands of a trained rifleman. British soldiers were trained to fire between twenty and thirty aimed shots per minute as part of a “Mad Minute” exercise. This maneuver was intended to apply maximum fire to an area in as short a period as possible. The current record for performance with a Lee-Enfield rifle is held a British Army rifle instructor named Snoxall who hit a twelve-inch target at 300 meters 38 times in sixty seconds. 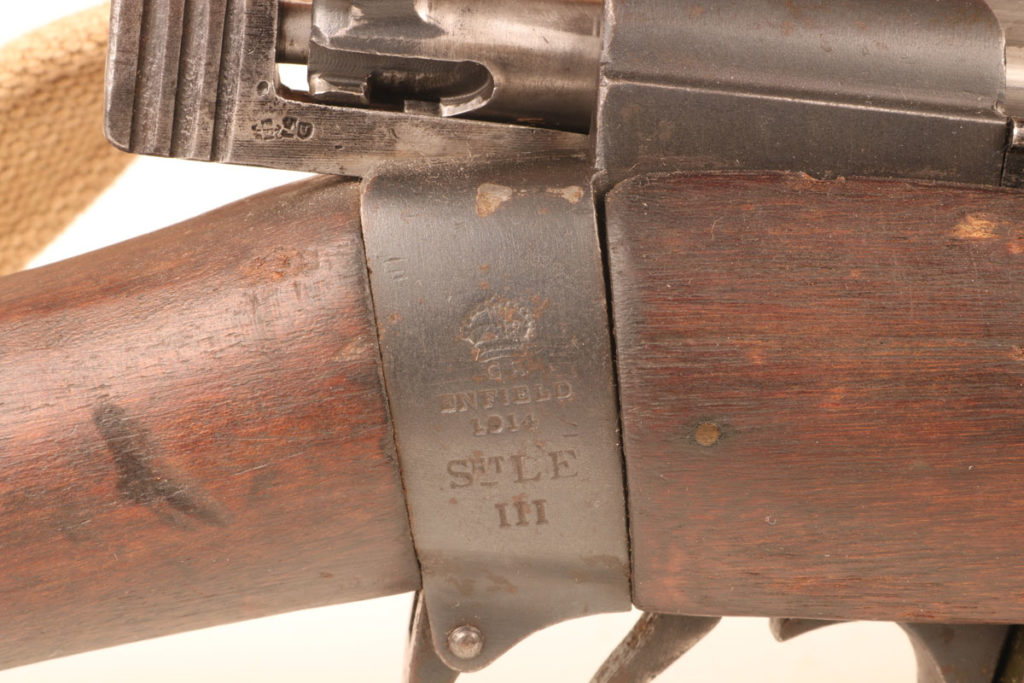 The SMLE’s vital statistics are inscribed on the wrist of the weapon. This particular example was produced in 1914 and bears the inscription “GR” for “George Rex.” 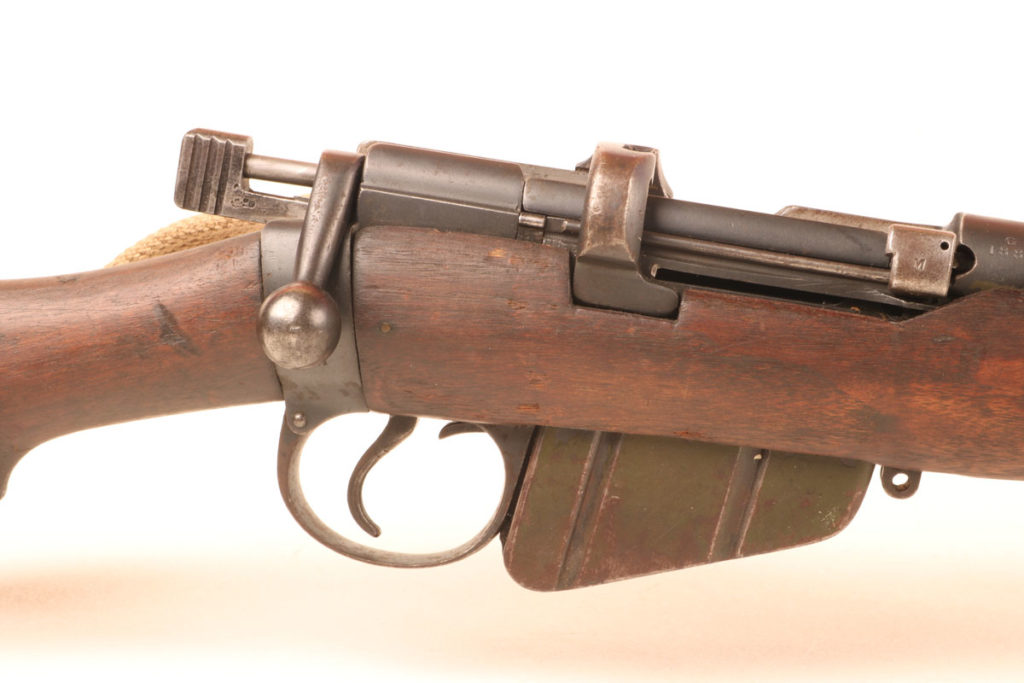 The SMLE feeds from a 10-round detachable box magazine.

For all its remarkable performance the SMLE No. 1 was an expensive rifle to produce. The SMLE soldiered on in Imperial service throughout World War II, particularly among Commonwealth troops. It was an SMLE No. 1 Mk III that Lachhiman Gurung wielded that night in Burma. However, after Dunkirk the Brits needed something they could produce a little faster. Enter the simplified No. 4 Lee-Enfield. The No 1 and the No. 4 can be easily discerned at a glance by their muzzle bosses. The No. 1 has a stubby nose. The No 4 sports a small bit of barrel protruding out the front. Each rifle accepts a different bayonet. 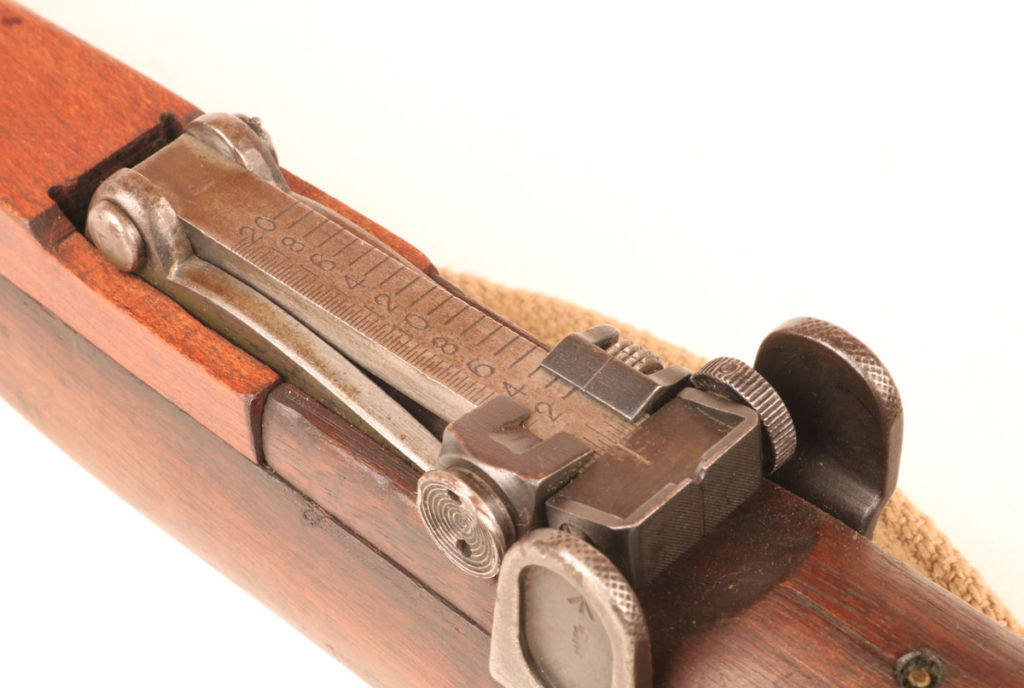 Early No. 1 SMLE rifles sported sights that were graduated out to 2,000 yards. 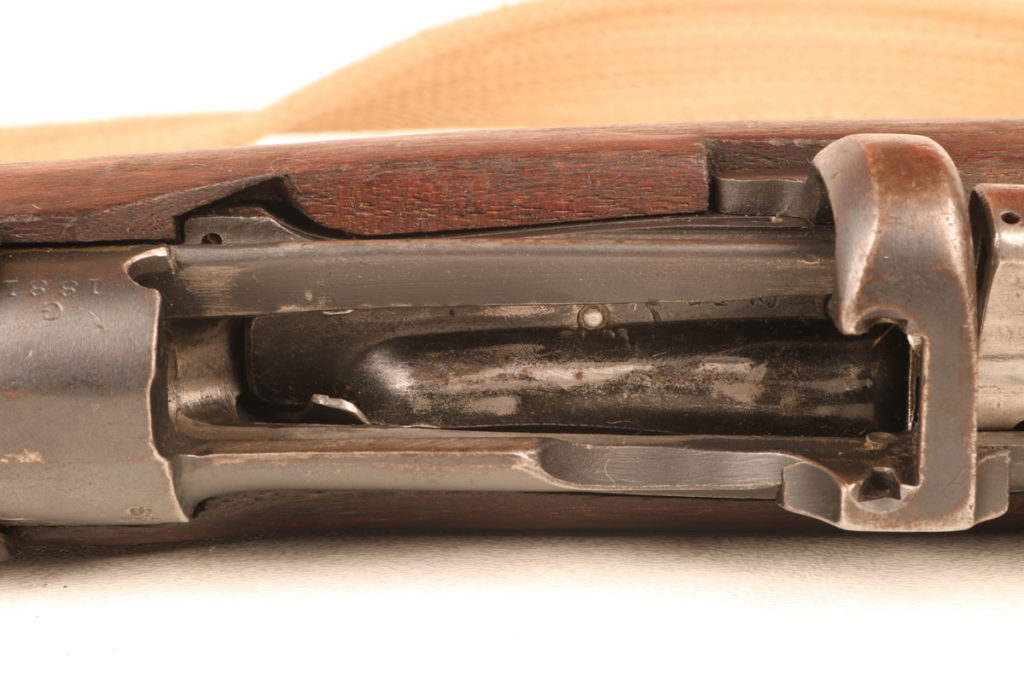 Despite its detachable magazine, the SMLE rifle was intended to be charged from the top via stripper clips. Early models had the magazine attached to the rifle via a short length of chain to prevent its loss. 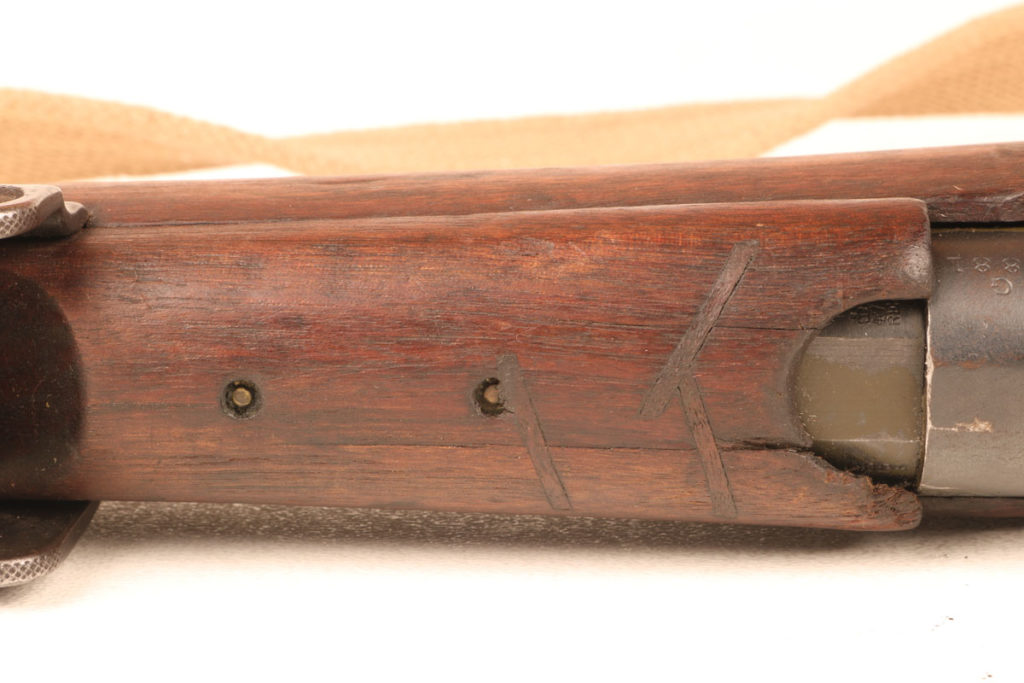 My SMLE No. 1 rifle has had a cracked forearm meticulously repaired.

The No. 4 came in several variations but most featured simplified flip-adjustable rear sights and somewhat cruder construction. Early SMLE No. 1 rifles had sights graduated out to 2,000 meters. Troops of this era were trained to use their rifles for massed volley fire as well as indirect fire over obstacles. There are numerous anecdotes of German troops in WWII believing they were under attack from machineguns when in reality they were simply being subject to the massed fire from trained British riflemen.

The No. 5 Mk 1 became known as the Jungle Carbine. This Lee Enfield rifle sported a shorter barrel, cut-down stock, and lightening cuts to make the rifle as lightweight as possible. All this conspired to enhance the Lee-Enfield’s already prodigious recoil.

The No. 5 Mk 1 (T) was the dedicated sniper version of the No. 4 Lee Enfield. Equipped with a wooden cheekpiece and a 3.5X telescopic sight, this superb sniper rifle served throughout WWII and Korea. The accuracy requirements for these rifles demanded that they place 7 out of 7 shots within a 5-inch circle at 200 yards.

I have a friend who was shot in the chest by a Chinese sniper wielding a captured No. 5 Mk 1 (T) during the Korean War. My buddy was wearing a brand new flak jacket at the time. The round struck the 1911A1 pistol he was carrying in a shoulder holster before deflecting into his flak vest, leaving him bruised but otherwise unhurt.

The wrist of the Lee Enfield rifle typically holds the gun’s vital statistics. The “GR” marking stands for “George Rex,” the British monarch reigning during the production of most of these early guns. These rifles were produced at a variety of facilities on several continents to include plants in the US and Canada. The Lee-Enfield saw service everywhere the British fought during the first half of the 20th century.

The No. 4 Lee Enfield rifle was the definitive WWII model. It was cheaper and faster to build than the WWI-era No. 1.

The rear sight on the No. 4 is a simple flip aperture. 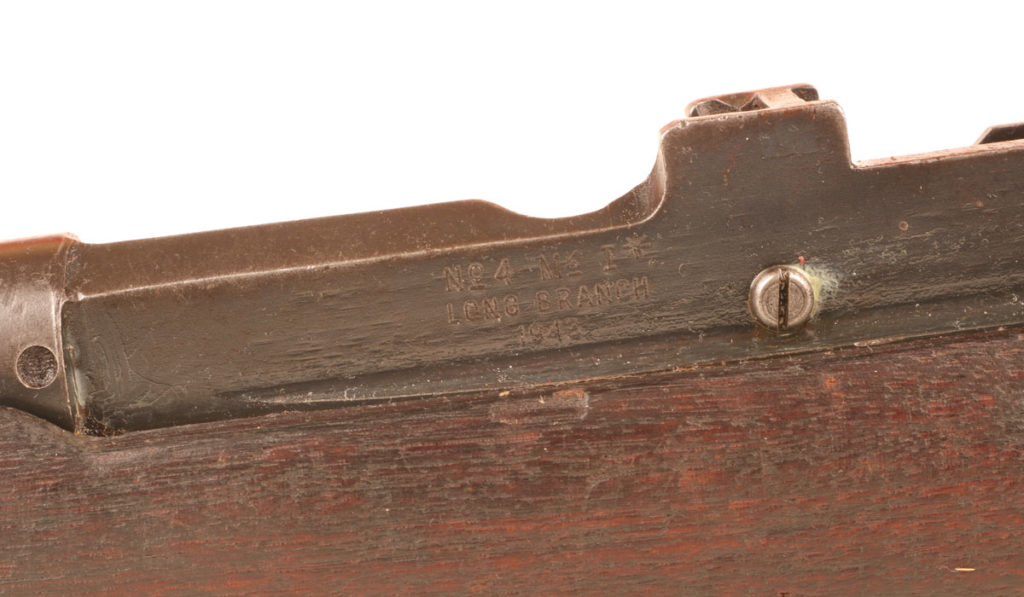 This No. 4 is a Canadian version built in 1943 at the Long Branch arsenal. 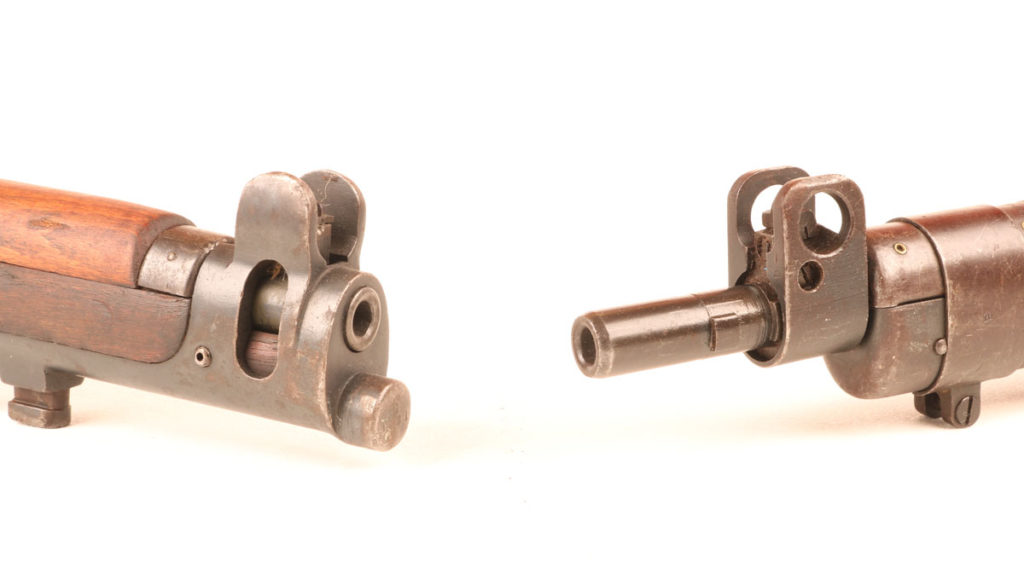 The No. 4 Lee Enfield sports a stubby bit of barrel out the snout. The No. 1 has a flattened nose cap. This is the easiest way to differentiate the two rifles at a glance.

The shortened No. 5 Lee Enfield included a conical flash suppressor and was called the Jungle Carbine.

The German Kar 98k cocks on opening. The Lee Enfield cocks on closing. This makes the British rifle faster in action. 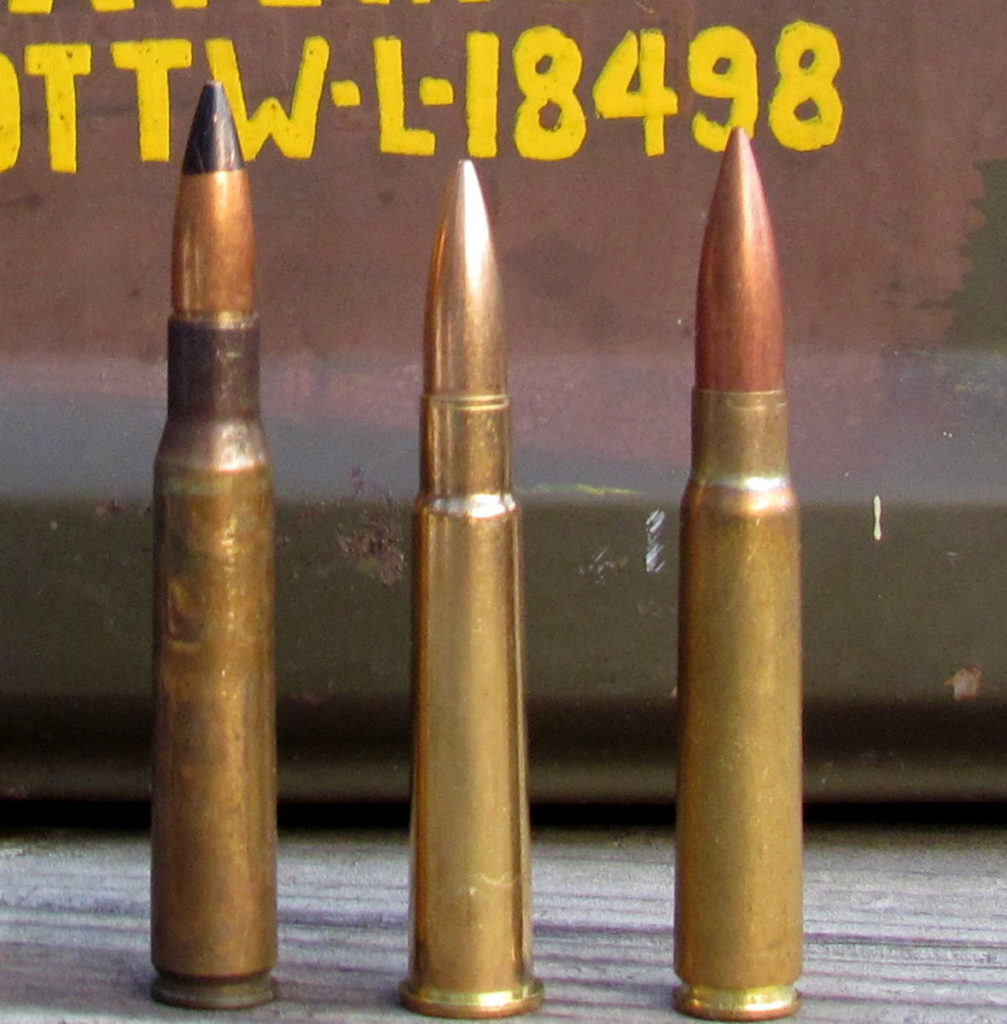 Lachhiman Gurung’s primary complaint after the protracted night action that decimated his unit and cost him an eye and an arm was that his injured arm kept attracting flies. He ultimately healed and returned to his native Nepal as a farmer. In time he immigrated to the UK.

In 2008 the UK adopted a policy that revoked the rights of some Gurkha veterans who retired prior to 1997 and lived in the country. The actual term used was that the Gurkhas had “failed to demonstrate strong ties to the UK.” In response, Lachhiman Gurung hefted his ludicrously huge rack of medals and headed for Britain’s’ High Court. In a classic “Don’t Make-Me-Come-Over-There” moment, this rugged little half-blind one-armed man showed the members of the court the face of true dedication and got the onerous law overturned. Lacchiman Gurung died of natural causes in 2010 at age 92. 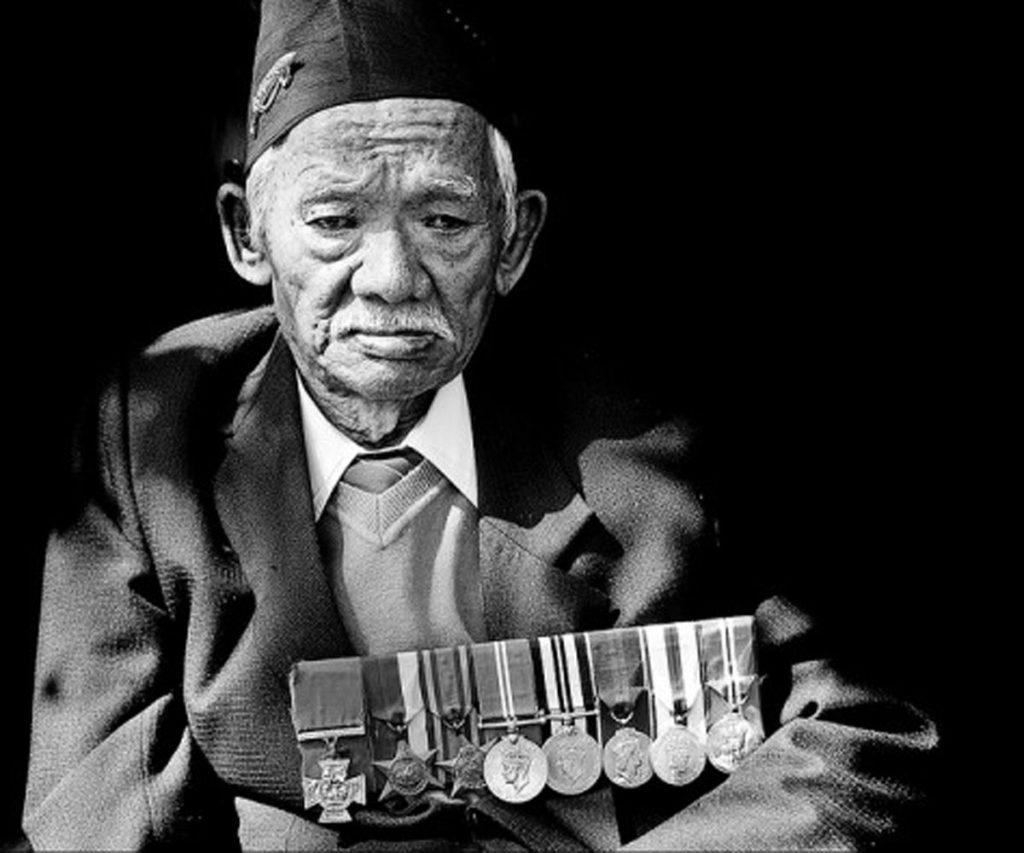 Lacchiman Gurung lived out his days in the UK as a hero. When ill-advised legislation threatening to strip Gurkha veterans of their benefits he rucked up again and made things right. I wouldn’t want this little half-blind one-armed man after me.

The Lee-Enfield rifle was the backbone of the British armed forces for more than half a century. Rugged, powerful, accurate, and fast, this classic bolt-action rifle and the rimmed .303-inch cartridge it fired expressed the will of the English people at the farthest reaches of their influence. In the hands of extraordinary men like Lachhiman Gurung the Lee-Enfield was the long arm of the British Empire. 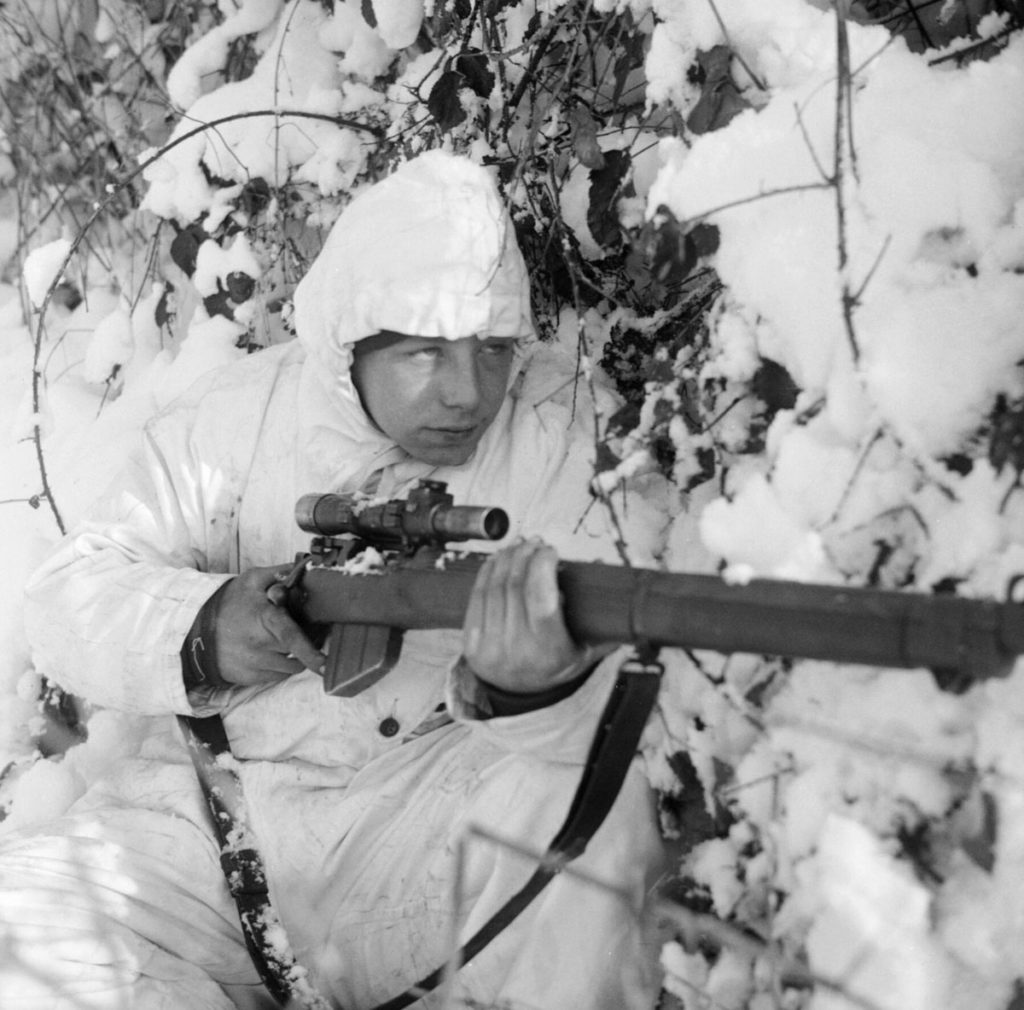 The Lee Enfield No. 5 Mk 1 (T) was the scoped sniper version of the rifle. It saw service throughout WWII and Korea. 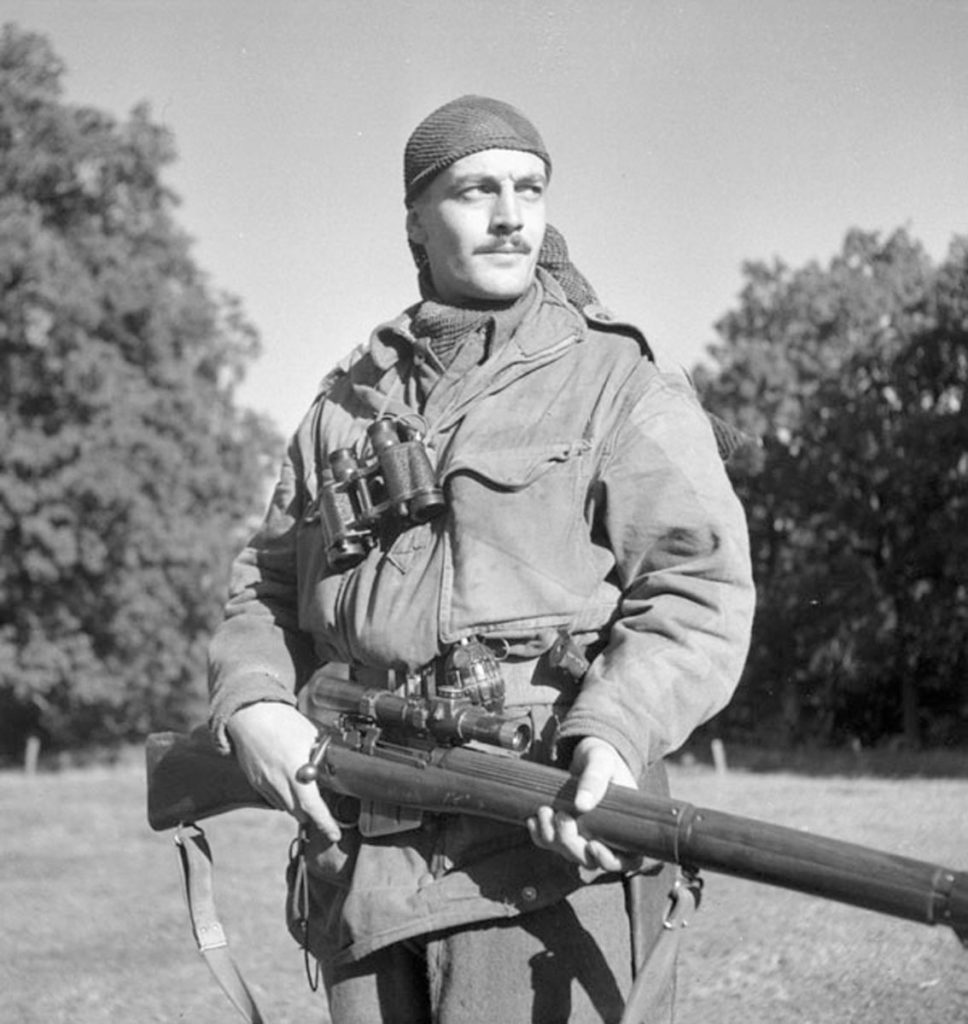