One of the most iconic handguns in the world is the P.08 Luger Pistol. It is the quintessential German sidearm that saw heavy use in both world wars. Of all of the weapons of the era, it remains one of the most sought after, as one of the world’s first successful semi-auto pistols. It also was the first handgun chambered in arguably the most popular handgun caliber in the world: 9mm Parabellum. 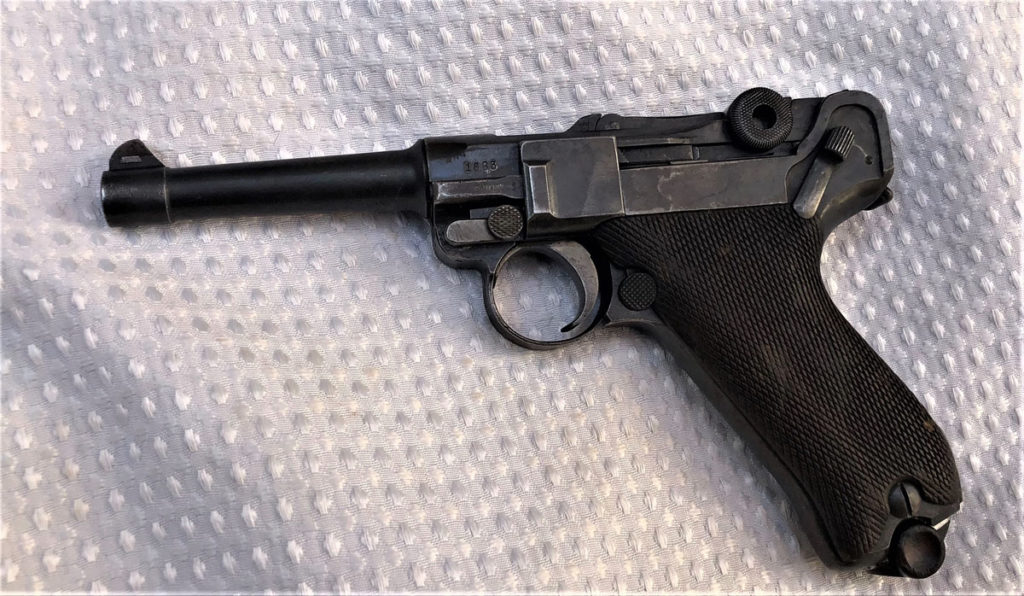 A World War I Luger

The Luger pistol was patented around the turn of the last century. Mr. Luger previously designed and tested the Borchardt pistol. The Luger was a modification of that design. The main modification was relocating the main spring inside the grip housing. Originally it was chambered in a .30 Luger(7.65 Parabellum), and some were sold in this caliber. The Luger was designed to be accurate and so it was machined with tight tolerances to ensure this.

The German Army was interested but it wanted another caliber instead. This new caliber was the 9mm Parabellum. The Luger was the first firearm chambered in this 9mm, which is why 9mm is sometimes referred to as 9mm Luger. The Imperial German Army adopted the Luger as the P.08. It was intended to replace two models of Reichsrevolvers then in service. However, those continued to serve through World War I alongside the P.08 as wartime demands for sidearms outpaced Luger production.

The P.08 wasn’t perfect and it had some reliability problems in the nasty conditions of trench warfare. This was because of its tightly toleranced, machined internals. While good for accuracy, these tightly fitted parts didn’t do very well in the horrid conditions of the trenches of WWI. Because it used all machined parts, it was also expensive to produce. Granted, stamped parts didn’t really become a thing until the next world war. The P.08 was officially replaced by the P.38 in 1938. However, the Luger stayed in service. It was something of a status symbol within the German armed forces at the time and was seen regularly with German units. In fact, the Germans produced Lugers through most of World War II as well, until 1945. This is pretty remarkable considering the amount of work required to produce one. It was also a coveted prize to capture by Allied soldiers. 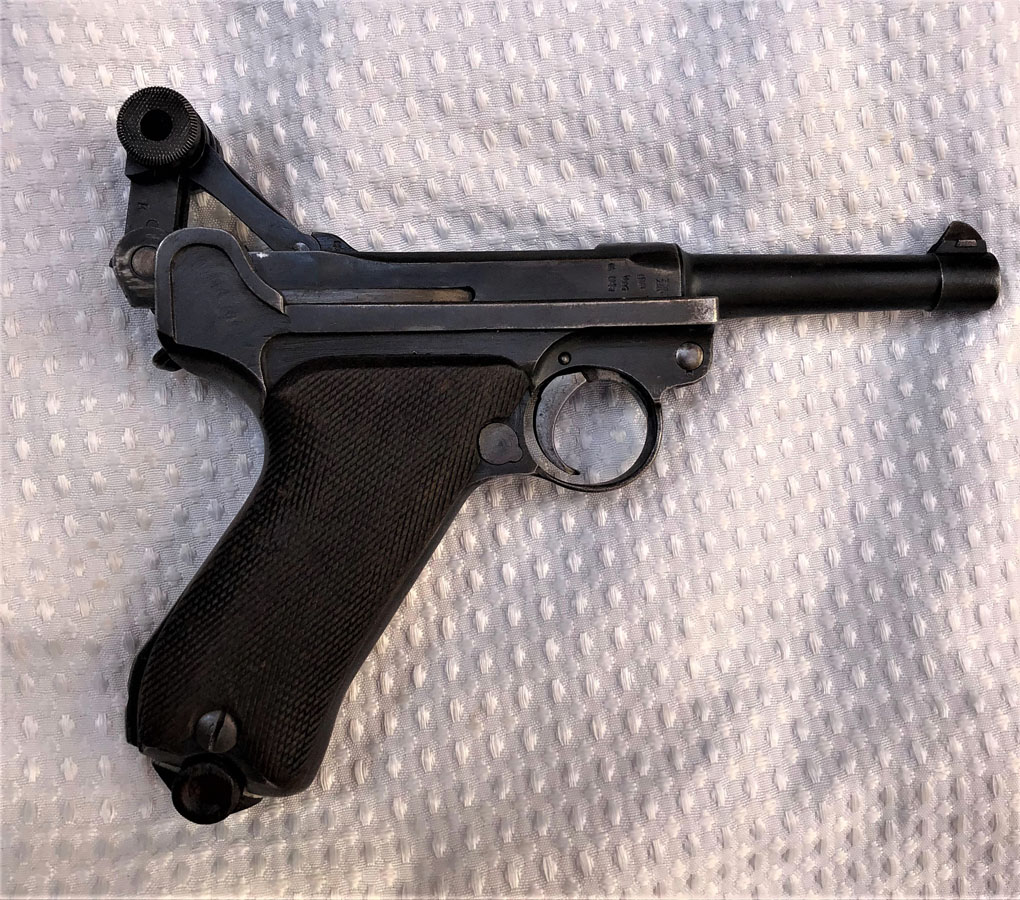 The toggle action of the Luger, opened.

The Luger uses a very unique toggle action, as opposed to the slide we’ve become accustomed to seeing. Upon firing, the whole top end of the pistol, barrel and all, moves rearward a small amount to unlock the action. Then the toggle action hinges in the middle while extracting the spent case. Once it reaches the limit of its travel, it begins moving forward with the bolt portion of the toggle chambering the next round. As the toggle closes, the top end moves forward again to lock the action.

Standard magazines for the P.08 held 8 rounds. They had a sort of button on the side, which is used to compress the spring and follower when loading, which will be familiar to you if you have one of the Ruger .22 pistols. The slot this piece rides in also allows for a quick peek at how many rounds are left in the magazine. Most Luger magazines have a wooden floorplate, though there were some metal ones used as well. The floorplate has two circular ends that stick out either side of the magazine. Their purpose is to aid the shooter in removing the magazine, by giving them something to grab hold of. Typically, the magazine is also marked with a serial number that at one point matched the pistol it was issued with. But with 100 years of time, and two world wars, most magazines are no longer “matching” the Luger they are with anymore. 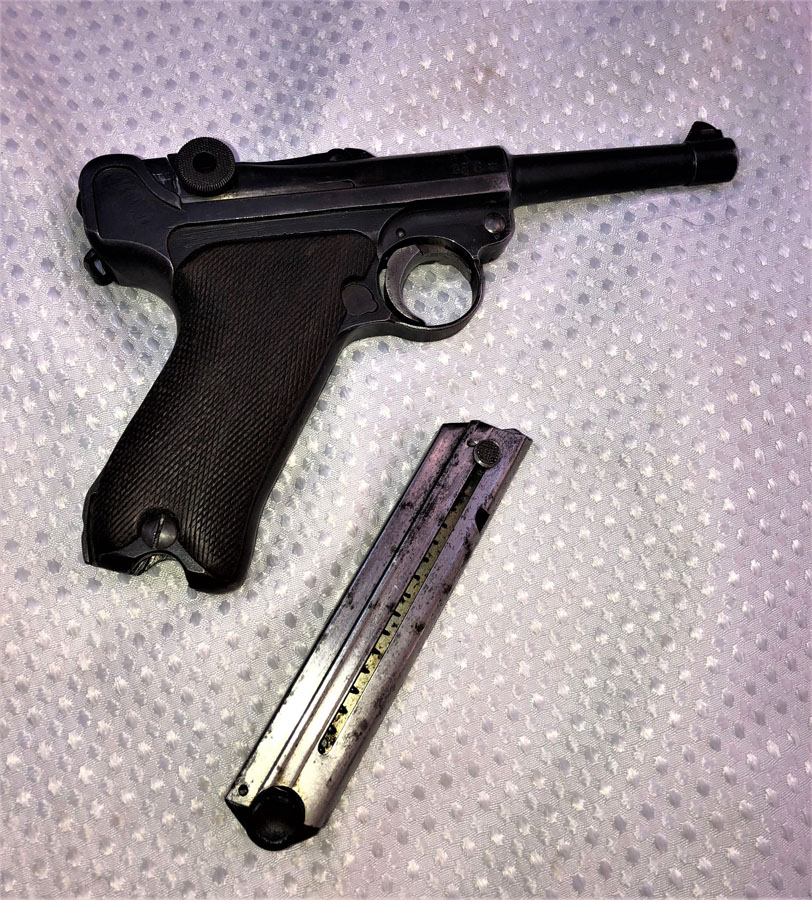 The Luger magazine is loaded using the tab on the side, very similar to Ruger .22 pistol magazines.

Lugers also have a peculiar feature that was unique to pistols of that era: the holster-stock. The early Luger holsters were wood and intended to double as a detachable stock. The idea was that it would enable the shooter to accurately engage targets at a greater distance than a “stockless” handgun could. As such P.08s have a lug on the back of the grip where the stock would mount. Interestingly enough, I have read some accounts of these sorts of “stocked handguns” actually seeing some use in WWI. C96 “Broomhandle” Mausers and stocked Lugers were apparently fairly popular with German “Strosstruppen” (translated Storm Troops, but not to be confused with the Nazi political elements that used the same name 15 years later) assault troops. This stands to reason, given that submachine guns weren’t invented until the very end of the war. So naturally, a compact, rapid-firing weapon—at least in comparison to the bolt action rifles then in service—would be popular with them. Some of these old stocked handgun combinations were specifically exempted from SBR regulations, so it is possible to try this idea out. Just make sure you do some research first to make sure you stay legal. 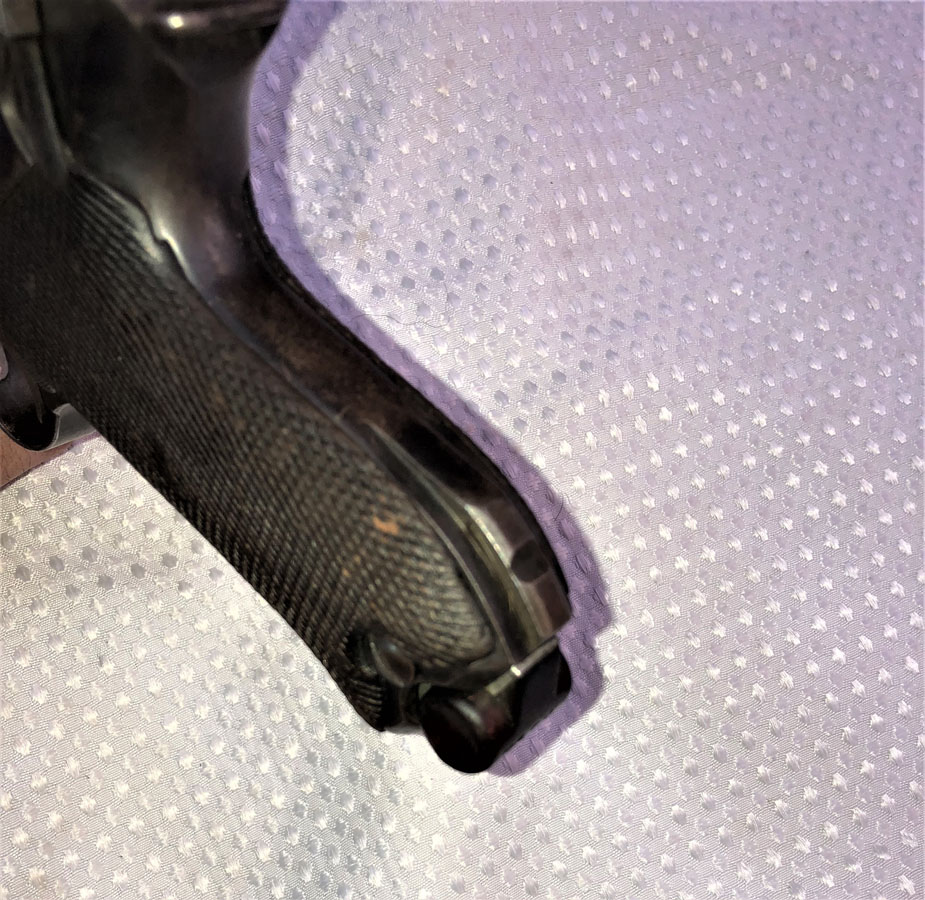 The lug on the back of the grip is where the “holster-stock” mounted when it was in use.

The original 9mm load used a truncated cone bullet. It was used into the opening days of the First World War. It was effective but it was found to exacerbate the P.08’s reliability issues in the field. So a new bullet was developed. A round-nosed bullet was picked this time and it improved the Luger’s reliability. This became the generic 115gr FMJ 9mm load that we have grown accustomed to. On the topic of ammunition, I’ll give the same advice I always do for something of this vintage. When looking for ammo to shoot through your Luger, keep in mind that these pistols are 100 years old. There is no reason to try and push it. Stick to mild ammo and handloads. There are some fairly “warm” factory FMJ loads in 9mm, as is a lot of the military ammunition loaded through the years, so make sure you know the ammo you want to shoot through your P.08 before you do so. Personally, I stick to 115-grain FMJs, though I have considered trying to duplicate the original truncated cone bullet load.

Artillery Lugers were one of the most well-known variants of Lugers produced. There were some different models of this type. Generally speaking, they featured a longer barrel, 8″ in most cases, and more elaborate sights which were graduated to some rather optimistic ranges. These, with their “holster-stocks,” were intended to be essentially a PDW for artillery crews. They also developed a “snail-drum magazine” which held 32 rounds for some extra firepower. The snail drum magazines were not particularly reliable and were not issued in large numbers.

The manual of arms for the P.08 is pretty odd by today’s standards, though that’s typical for handguns of that era. The toggle action it uses accounts for some of this. Once you get used to it, it’s not particularly difficult to operate. The safety lever is also kind of awkward. The grip angle is a bit steeper than a lot of handguns. In spite of this, the Luger points very well. The sights are very small in comparison to modern handguns, but typical of handguns of that time. 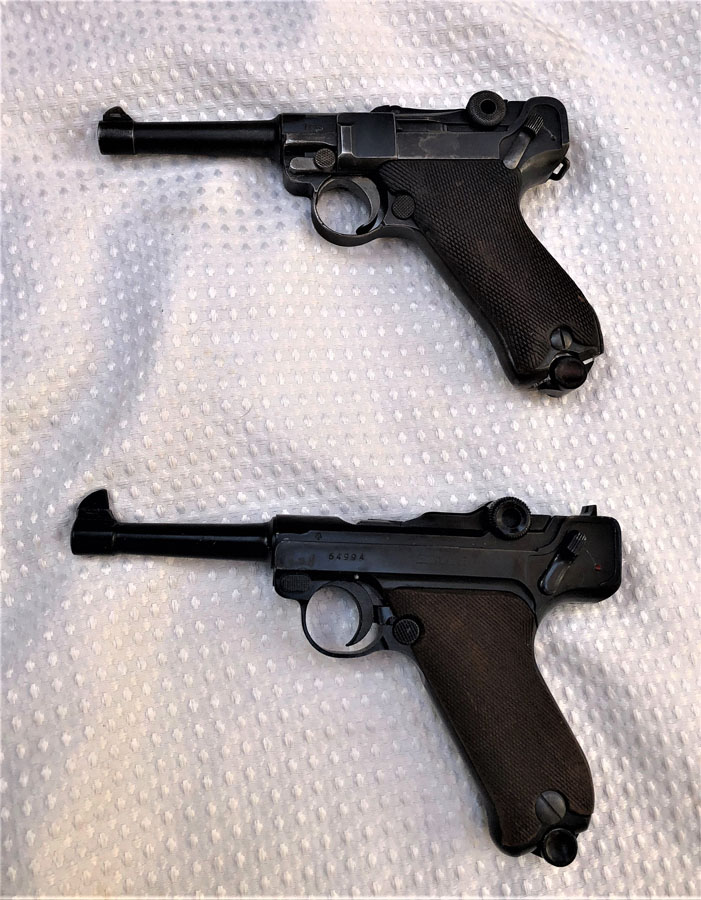 Various .22 clones of the P.08 have been produced through the years, some better than others. This one was made by Erma in Germany.

If you want a P.08 but can’t afford the price tag of an original, you’re not completely out of luck. Through the years, there have been some .22lr caliber Luger clones produced. These can usually be had for a fraction of the cost of a real P.08. And with .22lr almost back to where it was before the last big run on ammo, you can shoot it to your heart’s content–affordably. This particular clone was made by Erma, originally produced in Germany. There were other similar models from other manufacturers as well. As you can see, it’s pretty close to an actual P.08 in feel and appearance. About the only thing it’s missing is the lug for the stock. 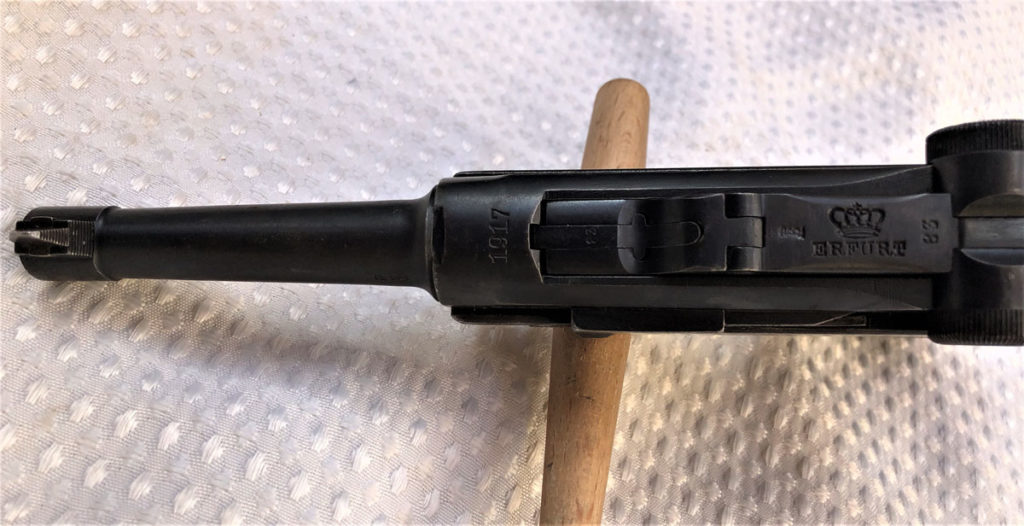 The year of manufacture and the arsenal markings.

This particular Luger was produced in 1917 at Erfurt arsenal. It is a standard model Luger. It does not have the “double date” or other markings that typically signify issue in both World Wars, so it is likely just a First World War-issued pistol. I used Winchester 115gr FMJ ammunition. Recoil is pretty mild shooting a Luger. Unfortunately, my particular P.08 was far enough off point of aim to make trying to group at 25 yards a rather frustrating endeavor, so I ended up doing my shooting at 10 yards instead. Point of aim issues notwithstanding, I was getting nice little 1 ½” groups at 10 yards offhand, with some of those almost touching. All in all, not too bad for a 101 year old handgun.

***Shop GunsAmerica for your next antique gun***